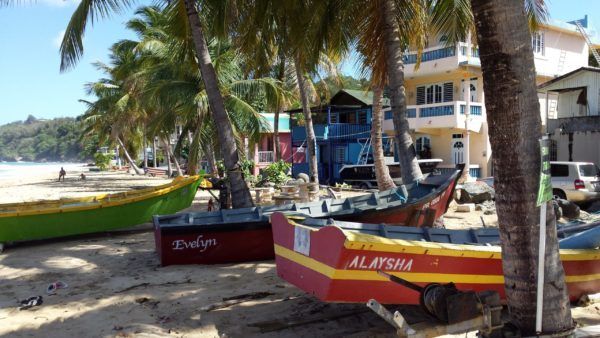 1. San Juan's Old Town with its bluish cobblestone streets, is in an admirable condition

3. The Playa Flamenco on Culebra and our favorite beach on the main island: Playa Sucia (very clean)

4. The abundant tropical nature of the El Yunque Rain Forest

5. Fun to watch the fast-moving iguanas

6. Feeling safe in San Juan's Old Town  thanks to the strong police presence

8. Services are of higher quality than on many other Caribbean islands

9. The easy-going lifestyle of the locals in the countryside

10. The country roads are in good condition

1. The mosquitoes on the beaches (their bites remain itchy for many hours)

2. Getting sunburned as the sun can be quite treacherous (you can leave your hat on)

3. A lot of beggars and bums

4. We saw rats in some of the more rundown streets at night.

5. We were told it is not safe to visit the nice La Perla neighborhood after dark

8. Not an authentic Caribbean island as it is very Americanized - not a truly exotic destination

9. On Culebra Island, the beach is lovely but the village is nothing special

10. Some of the shabby kiosks that offer street food seem to have serious hygienic shortcomings

There is a viewing tower in the middle of the El Yunque rainforest, and it’s worth climbing to the top. You can see the whole forest, and even as far as San Juan.

The beaches frequented by tourists are clean and tidy. On our walks, we often came across iguanas – not always a reassuring sight, but they’re perfectly harmless.

San Juan is a magical place, and I loved it. We saw plenty of big luxury hotels, but also visited the parts of the city where poorer people live. It seemed strange to me that all the houses have flat roofs, and that there are bars in front of doors and windows to protect them against burglars. I’d feel like a prisoner in my home, but it seems perfectly natural to them.

We often took a small boat from Bayamón to San Juan – it’s cheap and comfortable. One of those little trains that drive on the road frequently picks up tourists at the San Juan docks for a tour of the old town. The last stop is at the entrance to the fort of El Morro. The little train is free. There’s also a very beautiful cemetery just under the fort.

We also took a trip to the southern part of the island, where the weather is much drier. The sandy beaches of this Caribbean shore are almost perfectly white, and there are many salt pans in this part of the island. On our way, we stopped at Arecibo, which boasts the largest astronomical observatory in the world. It was a fantastic experience. This is also where the Jodie Foster film ‘Contact’ was filmed.

The center of the island is mountainous, with numerous artificial, freshwater lakes.

It’s also worth visiting the Bacardi factory. The entry fee is a bit steep – around $20, if I remember correctly – but includes a cocktail and a minibus tour of the whole factory area, as well as a visit to the museum. It’s possible to buy an even more expensive ticket which permits entry to the manufacturing building itself.

Tragically, the hurricane of September 2017 caused huge damage to a large part of the island, but reconstruction has already begun. I expect in a year or two it will be more or less back to its old self. I’d recommend Puerto Rico to anyone who loves the Caribbean atmosphere and good food.

,,Driving on the island is generally not a problem, though there are bad traffic jams at rush hour – in the morning before school starts and around four in the afternoon. The highways are well-maintained, but you have to pay a toll to use them. Watch out for potholes on side streets. 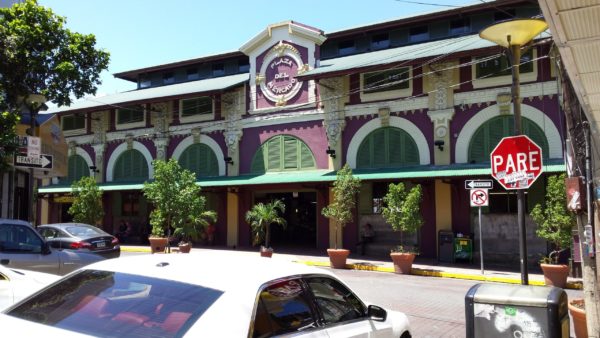 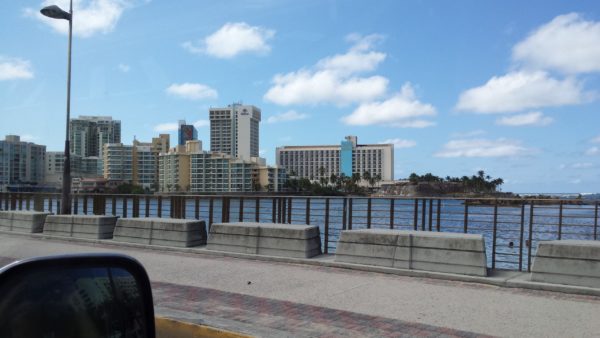 “Puerto Rican cuisine uses lots of locally available ingredients, including bananas. Plantain is used to make several types of food – it can be baked (tostones) or made into layered bananas (mofongo), etc. In coastal areas, fish and sea scallops are widely available, but so are chicken and pork. Their favorite side dishes are rice and beans.

One of the best street food places we ate at was Calizo Kiosko, in the Fajardo area. They offer high-quality food relatively cheaply, in a true Caribbean setting. The seafront promenade in Las Croabas is lined with plenty of tourist attractions, while a little further afield, El Bohio is a restaurant run by a fishing family, where the morning’s catch is cooked and served in the evening, so fresh fish is guaranteed. We were served by the owner’s son, who told us about how he would go lobster diving. Equally good was the Mi Vida Café near the north entrance to El Yunque, where American-Puerto Rican fusion cuisine is served, and food and service are first class.” (2019) 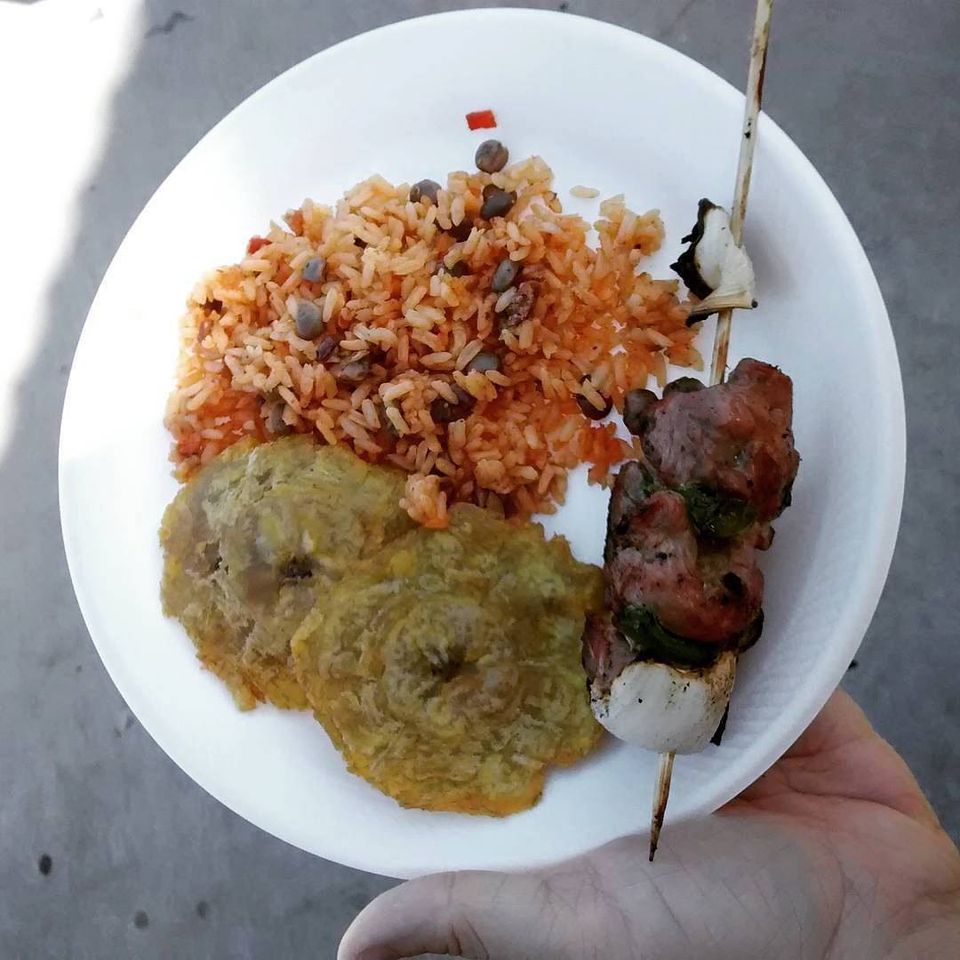 “Old San Juan is a neat little neighborhood, where even the facades of uninhabited houses have been renovated. The squares are beautifully maintained, with boutiques and small pubs intersecting on narrow streets. And most importantly, there is a Marshall store. Anyone who knows the world of real outlet stores in the US will know what the name Marshall represents. It has a bit of a flea-market vibe, but for pennies, you can get an original Ralf Lauren t-shirt or even a Michael Kors bag. People practically fight to the death over them. It doesn’t matter if it’s grass green or ugly yellow, they buy it because of the logo. How strangely the human brain works! If someone tells us that a simple round-necked leotard has an equestrian polo embroidery, it’s worth five times as much as one without an embroidered logo (though it may be made in the same factory, from the same material). All a tasteless bag needs, meanwhile, is a glittering MC, DG, LV, or ƆC logo, and millions of women will go crazy for it. So what’s needed? A strong marketing campaign, so that people don’t care whether they’re getting better quality, but simply believe they’ll look cool walking down the street with one of these. Once the snobs at the top of Maslow’s hierarchy have been served, the plebs can come, who will be happy to open their wallets in the outlet store because here they are only asked for twice as much as the product is actually worth. After seeing this, I am no longer surprised that the same trick also works in political marketing.” (2018) 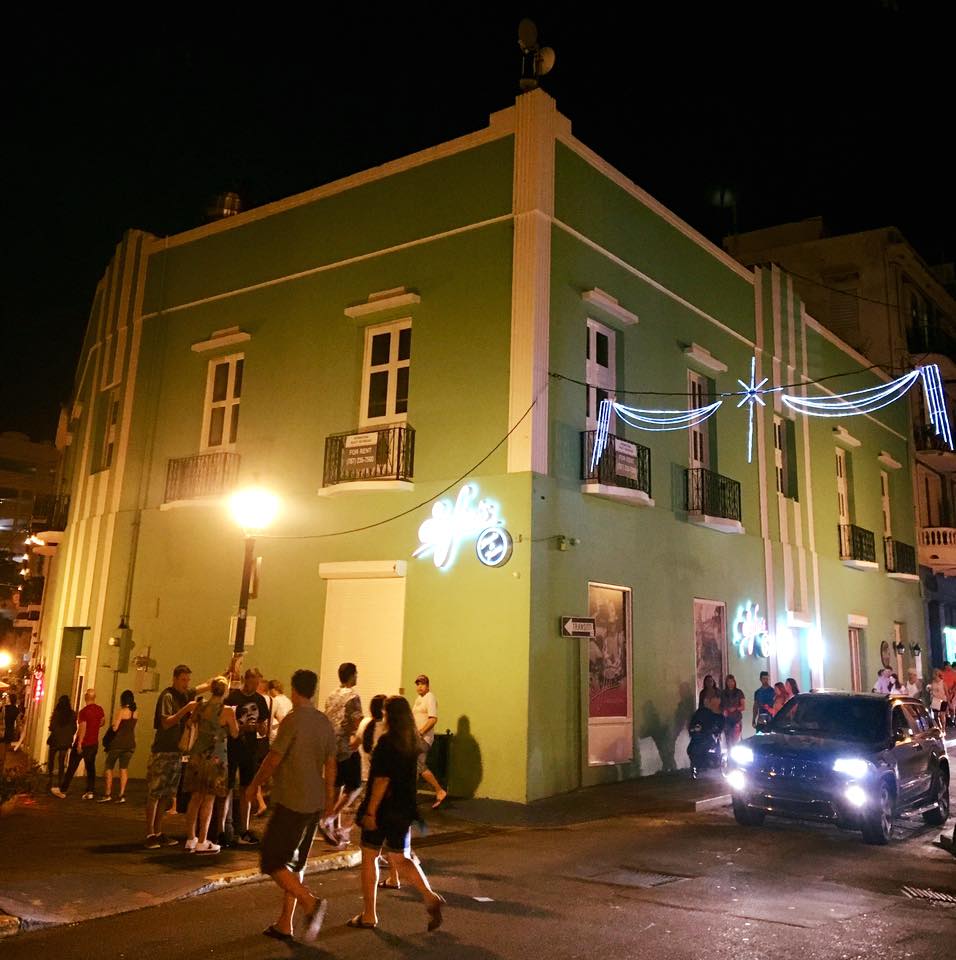 Puerto Rico is safe. You can walk around even at night, with some exceptions. There is a lot of police presence in San Juan that makes tourists comfortable. Police officers don’t bother visitors for no reason.

Tourist areas are usually safe, but petty crime (pickpocketing, etc.) is common. Violent crimes are primarily drug-related. Therefore, we recommend that you carry as little cash and valuables as possible, make copies of important documents, and keep them separately. 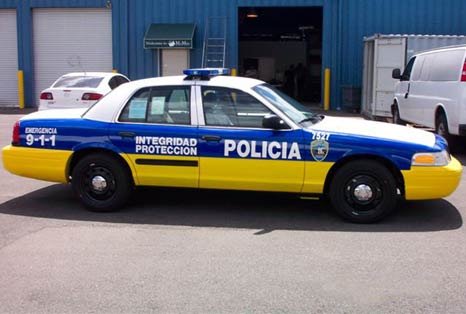 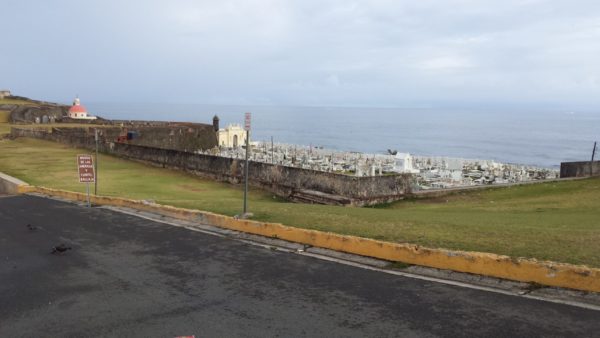 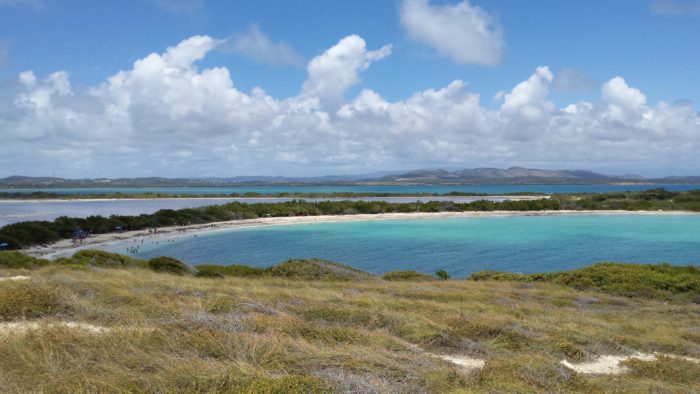 Puerto Rico is a Caribbean territory, part of the Uniteted States. It is located on the continent of North America, in between the Caribbean Sea and the North Atlantic Ocean, east of the Dominican Republic and west of the Virgin Islands. (BVI and USVI).

The shortest (bird fly) distance between Puerto Rico and the mainland US is 3,529 km (2,193 mi). The shortest flight time, from Miami would be 4 hours.

It takes 4 hours to drive around the main island, provided that you stick to the highway and travel non-stop (on back roads would be about 6 hours). With the passenger-only fast ferry, a ride between Puerto Rico and Vieques takes about 30 minutes. .

Languages: Spanish and Engish are both official languages

Religion: About 80% of Puerto Ricans are Roman Catholic

Puerto Rico is a political paradox: part of the United States but distinct from it, enjoying citizenship but lacking full political representation 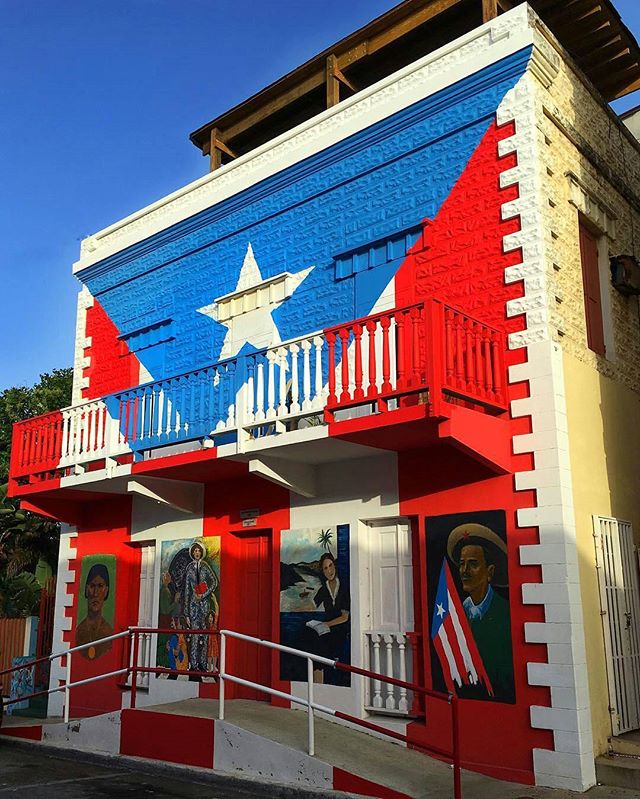 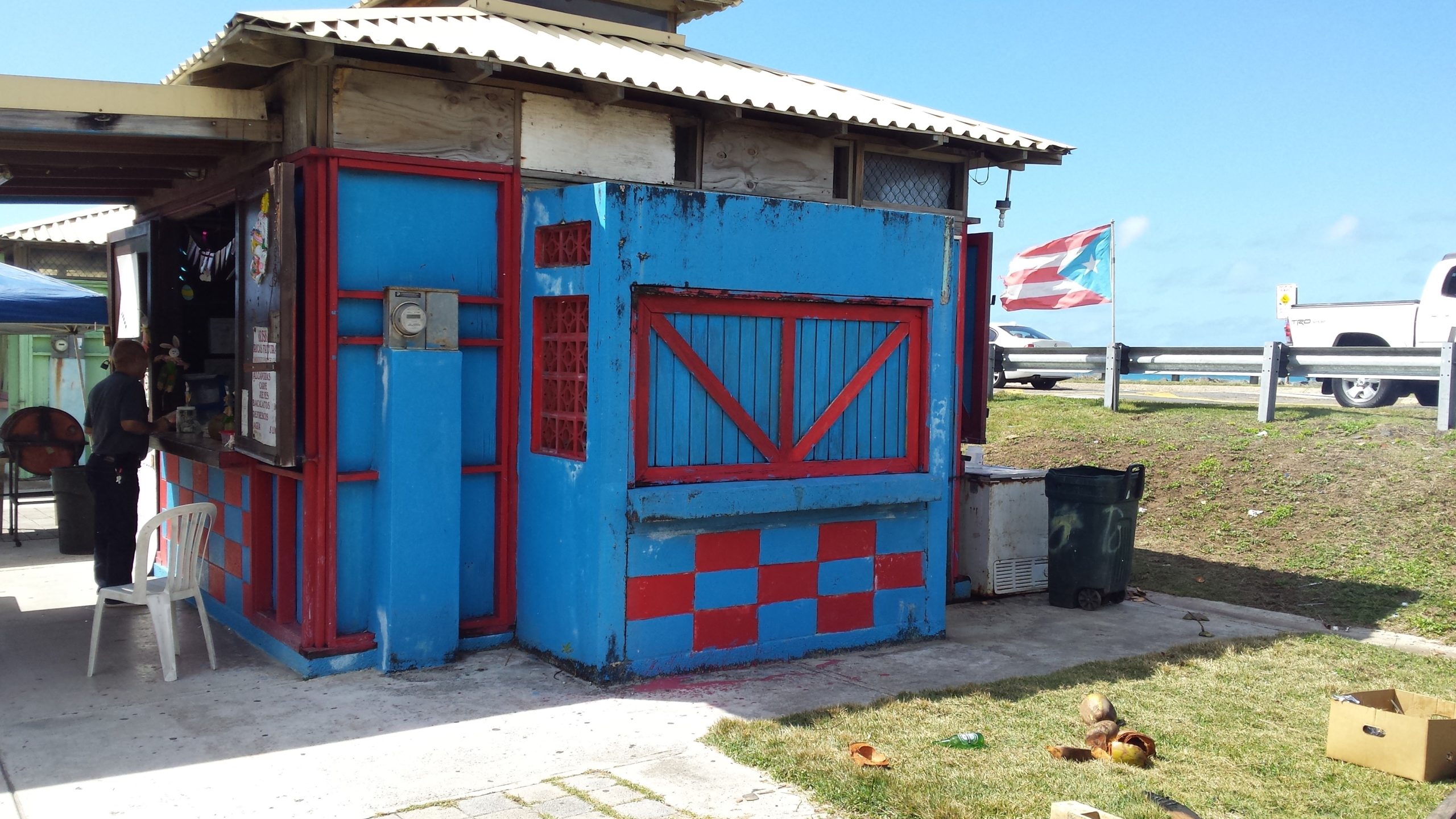 Cyclones can occur in particular from May to November, with the peak of the season being between mid-August and mid-October, according to experience. High wind speeds, heavy rainfall, and extreme swells pose a severe risk to people in the affected regions.
Hurricane Maria devastated Puerto Rico in September 2017.  That was the strongest hurricane to hit Puerto Rico in nearly a century.

The United States invaded Puerto Rico as part of the Spanish-American War of 1898.

Since 1917, residents of Puerto Rico have been US citizens.

Puerto Rico has one representative in the US House of Representatives but without the right to vote.

The head of state of Puerto Rico is the current U.S. president, but the local head of government controls the domestic affairs. 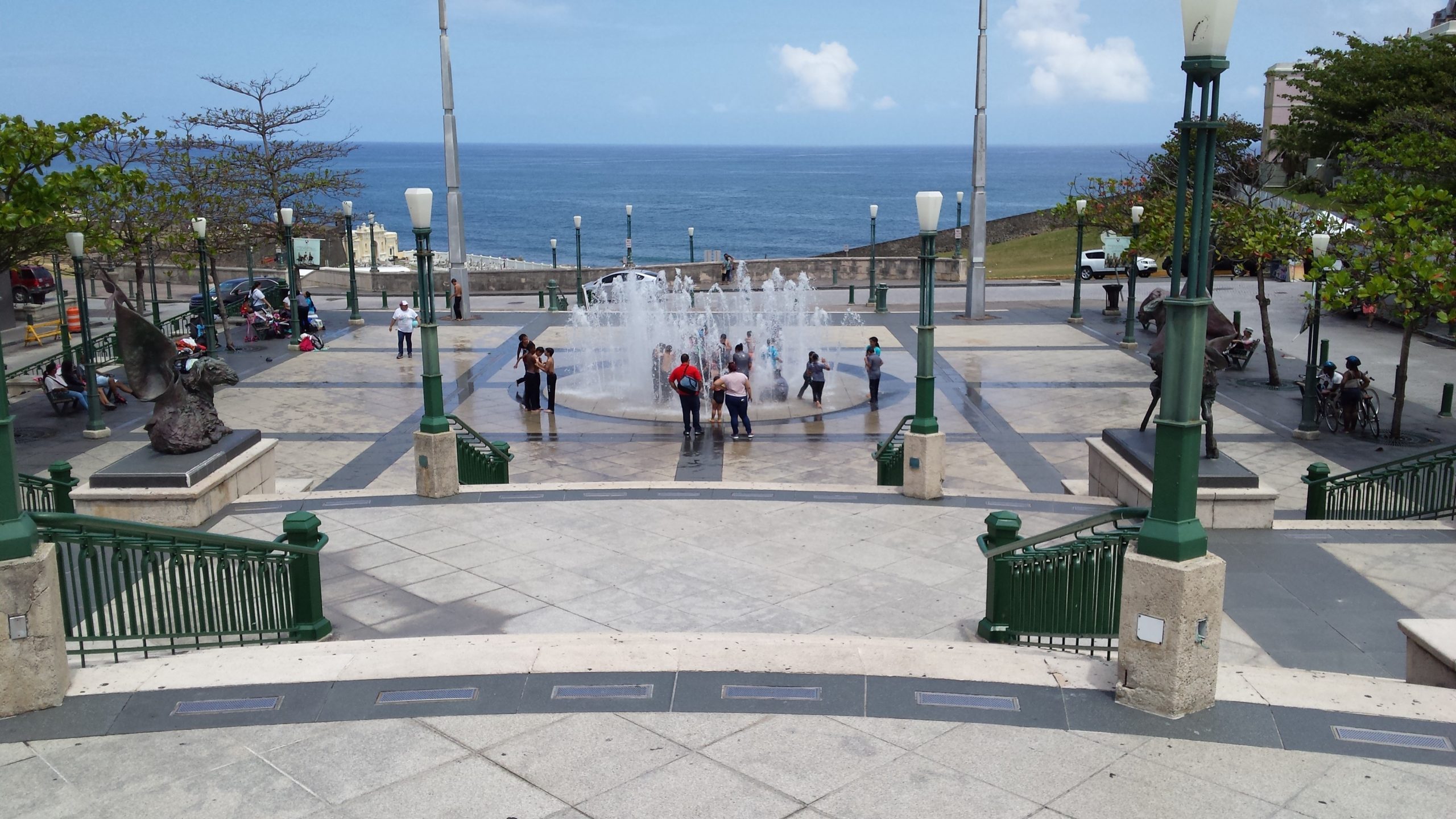 On average, Puerto Ricans have genetic contributions from Europeans, West Africans, and Native Americans of approximately 66%, 18%, and 16%, respectively.

Puerto Ricans have a great sense of humor, many of them real jokesters.

In general, Puerto Ricans are very affectionate, even in public and even to people they hardly know. They greet everyone, even strangers they just met, with handshakes, pats on the arm or back, hugs, and even kisses on the cheek. They say goodbye in the same way. 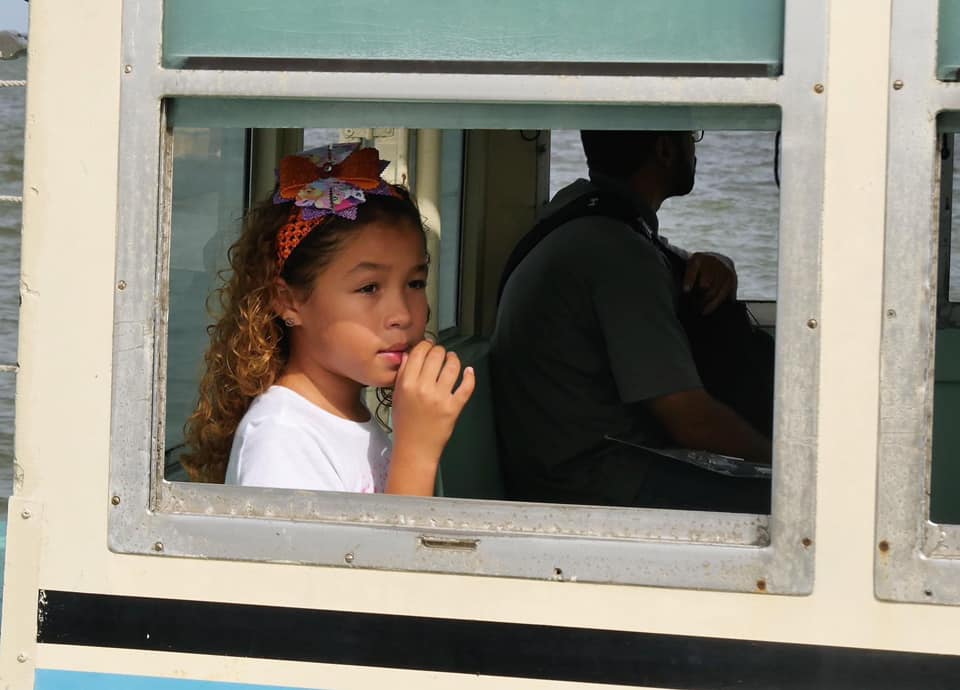 1. Puerto Ricans are unusually generous, even with foreign visitors. Let us accept their kindness, their generosity, but let us not misuse it.

2. In Puerto Rico, the word Negro is not an offense, politically incorrect as it is in the US. The term “Negrito” (little negro) is one of the most common words of endearment. Locals even call a blond, blue-eyed, Caucasian person “negrito”. It is their equivalent of “sweetheart.” 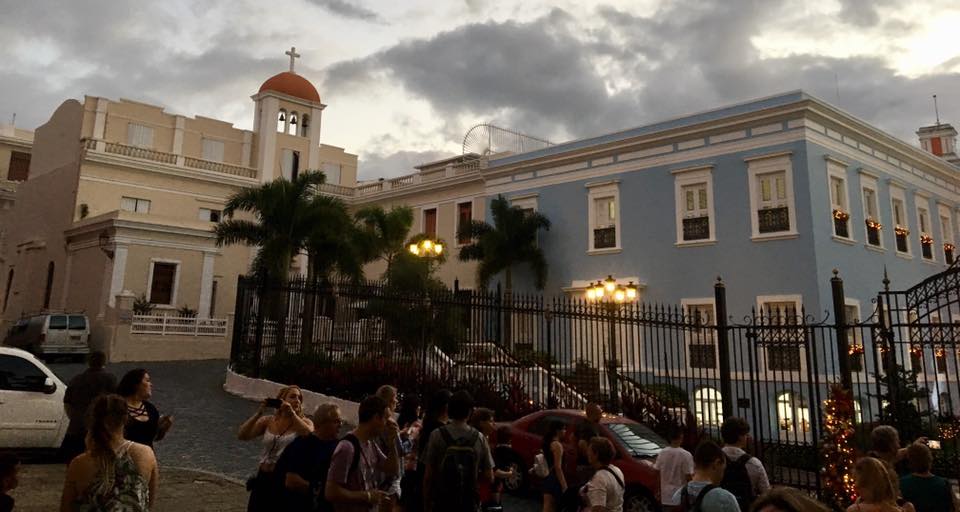 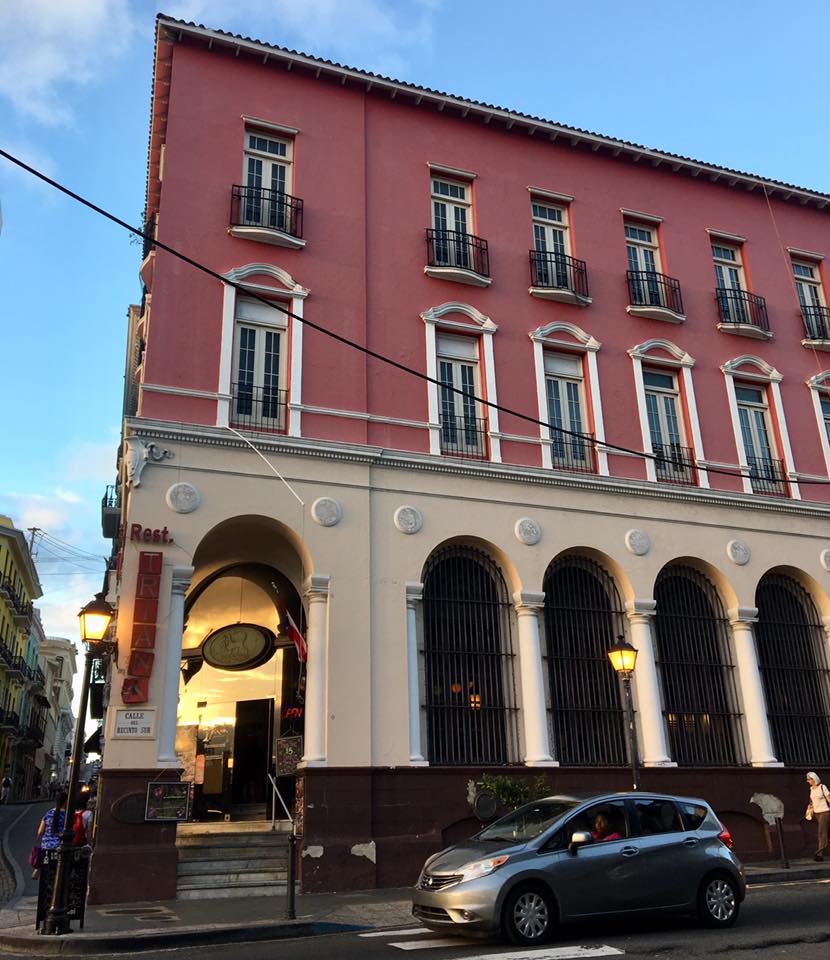 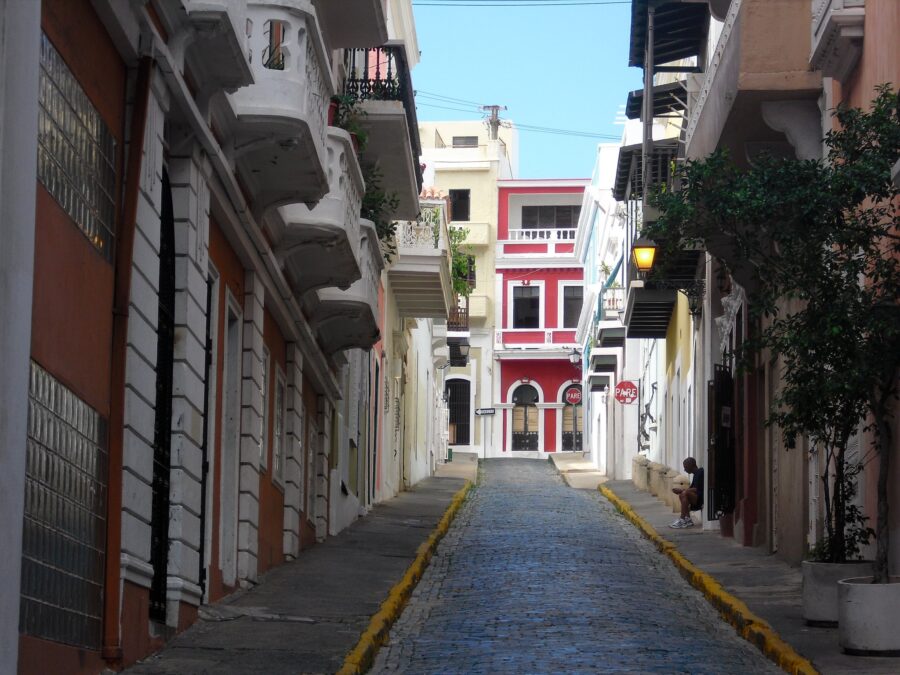 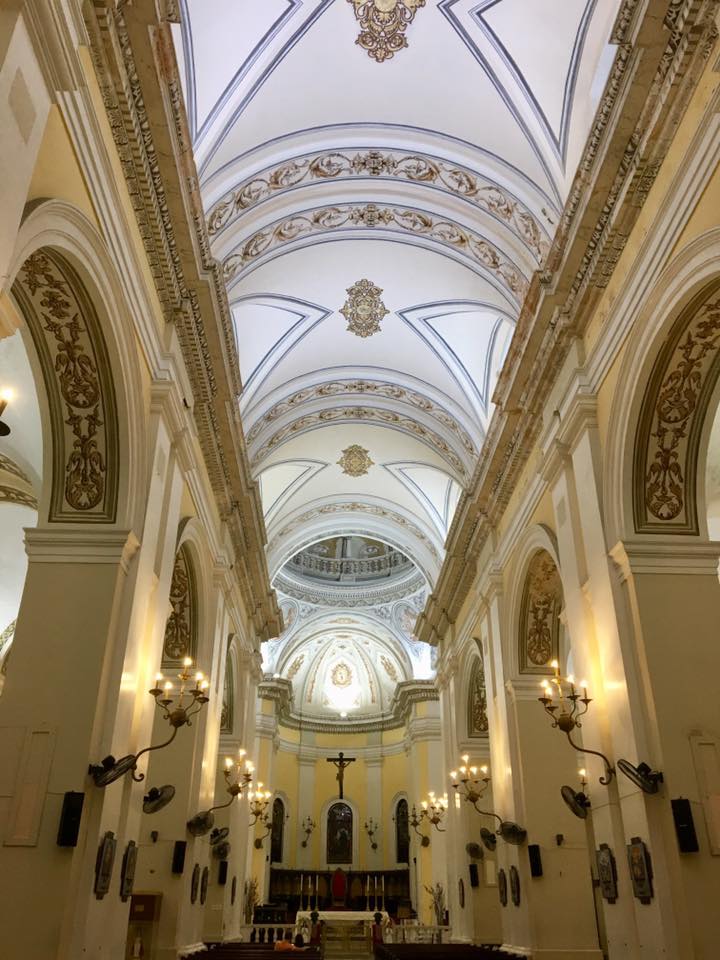 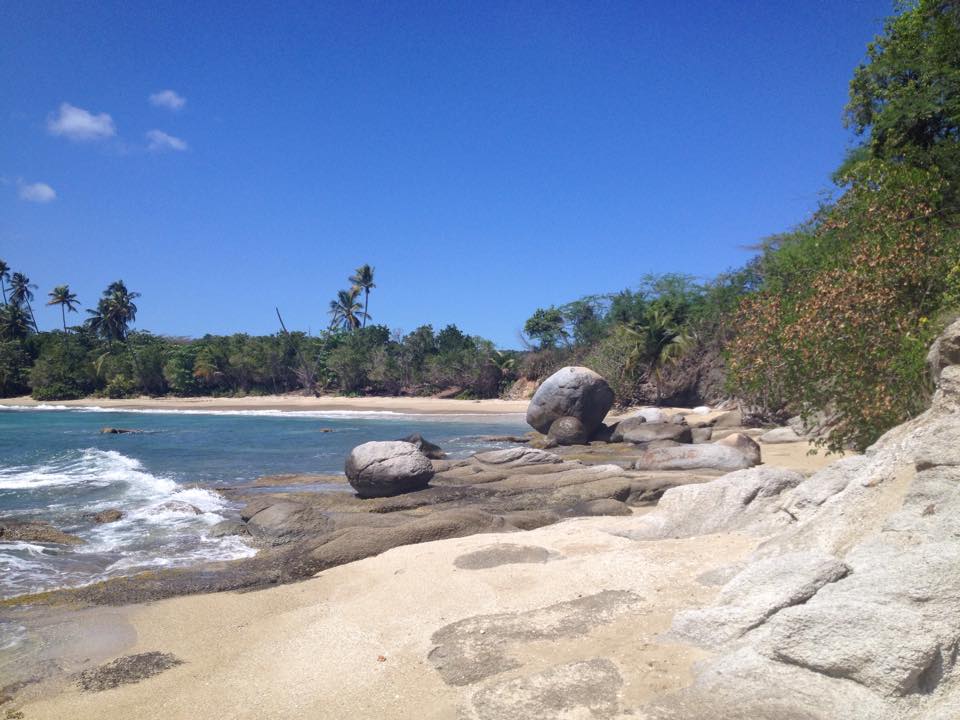 “We went to three different beaches. The worst of these was Isla Verde in San Juan. The beach has a long line of super-expensive resort hotels crowded with people, the sea was full of seaweed, and the quality of the restaurants was nowhere near what can be found in other parts of the country.

For me, the second-best beach was Playa Seven Seas, close to Fajardo. This beach is mostly frequented by locals, but the disadvantage is that it is rocky, and there’s only one eatery, which keeps regular opening hours. From a natural point of view, however, it’s very picturesque. On one side of the semicircular bay can be seen Faro Las Cabezas de San Juan, a lighthouse situated in a nature reserve. We went there on a Monday, and there was hardly anyone, we had almost the whole beach to ourselves. Luckily, locals prefer to go to the beach en masse between June and August, as for them January is too cold

We had the best time on Luquillo beach. There was no seaweed or rocks here, the beach was beautiful, with clear waters, and there was all the necessary infrastructure, including even a long line of street-food kiosks next to the beach, offering hungry holidaymakers the best of Puerto Rican and American cuisine.” (2019)