2. the massive mirrored structure of Bell Works in Holmdel

The real attraction of New Jersey is its oceanfront. It stretches a long way, all the way down to Cape May, and is famous for its beautiful Victorian houses. Dolphins can be seen from the beaches of Cape May. I’ve been there four or five times, and I’ve always come away with a feeling I’ve only had in one other place, Beverly Hills LA: that I’m one of ‘the poor, and can’t identify with the people around me. Not a great feeling. Even so, I go down to Cape May whenever I can – it’s such a beautiful place. (2018)


“For anyone visiting New York in the summer, and who doesn’t plan on renting a car, I’d recommend boarding a New Jersey Coastline train at Penn Station and traveling all the way to Belmar (look for the Bay Headline).
I say Belmar because from here you can walk to the ocean shore on foot, where you can spend a real, unadulterated American beach day (my husband says that I should mention Point Pleasant Beach because here you can also walk to the beach, and there are more attractions). The ocean here has real magic.” (2018)


“If someone is living in or visiting New York City and has small children, I highly recommend visiting the township of Hope in New Jersey, where there is an amusement park called Land of Make-Believe. It's in a beautiful location. Away from the noise of the big city, it's a little slice of paradise surrounded by hills. Before anyone imagines some giant American amusement park, it’s actually deliberately very small: even the old Budapest Amusement Park was bigger.

Part of it is a small water theme park. Lying in a huge rubber float (or donut) on the Lazy River, you can see eagles in the surrounding mountains, or maybe they were hawks, I don’t know. A fantastic sight, anyhow! We chose route 206, which took more time, but it was worth it to drive along forest roads, past small settlements and farms. It was a magical journey!"

,, If you get the chance, do visit an American football game. We watched the Jets at the Metlife Stadium in New Jersey. It was an incredible experience, and amazing to see how much they know about entertaining people. Entry to and exit from the stadium is professionally managed, and there are fast food restaurants on several levels inside the building. So grab a basket of chicken wings and a sugary cola and enjoy the game! Even if you don’t understand the rules, that’s no problem – you’re sure to soak up the atmosphere at least!

“Riptide!!!!!!!! I would like to draw your attention to this phenomenon. You have to be very prepared for it. Even knee-deep water can be enough to sweep away a child. Everyone should be careful to enter the water only in places where the “Baywatch” boys and girls are there. They usually clock off at 5 p.m. Anyway, they can clearly see from the tower how the waves are breaking and where there is no white foam, there is that powerful undertow, the “rip”. After five, the surfers come (they only have to worry about the sharks).

The riptide is not like a whirlpool, which drags you down into the water. This particular riptide pulls you from the shore towards the open water, and many people swim so desperately against the tide that they drown. The fact is, though, all you have to do is swim sideways, parallel to the shore. Even if you just float and let it carry you, you’ll end up back at the shore, not where you entered the water, but at another point on the beach. If you have an acquaintance who is going into the ocean, share this information with him. A lot of people don’t know about it.”

“Atlantic City: A hostess was waiting for us and we got a complimentary game voucher, which meant we could try out the slot machines for $30 as a gift from the hotel. A registered credit card was issued with the virtual amount. That meant we got to try our luck for free. I have to say, though, the chances of winning are very poor. With $30 in total, we won $6 virtually. So just be careful with the slot machines, though they promise jackpots. Personally, I wouldn’t have been happy if I had spent the $30 out of my own pocket.

Still, at least the hotel was classy and elegant. Huge chandeliers hung from the ceiling and everything was tidy and clean. There was also a separate make-up room in the bathroom. At the entrance to the casino was a security guard who checked everyone’s passport. It’s strictly twenty-one and over. 90% of the guests were old, retired people who either had more cash than they knew what to do with or were just burning through their pensions here. There was even one old guy in a wheelchair with a walking stick.

The elderly people stood pushing buttons like it was a routine. We were considered practically babies in terms of our age, but of course, we were also casino virgins.

We had our lunch in the restaurant of the five-star hotel. As part of the regular summer promotion, there was a ‘fill yourself to the gills’ buffet for $10. For a ridiculously small amount, we could consume an unlimited quantity of mussels, crabs, and all sorts of delicacies. Dessert was ice cream, cake slices, pies, compote, etc. We did not spare our stomachs.
After a hearty lunch, we set off for a walk along the shore. The coastline of Atlantic city is long and beautiful (and crowded during the high season when the weather is good).

The hotels are lined up next to each other, and everywhere genuinely was incredibly lively. We looked in here and there, and some places were worse than a maze. Sometimes we’d go inside, then hardly be able to find the exit again. There was also a catering area with a jungle world for children. Animators entertained the little ones while, I suppose, the parents risked their money on roulette. I think the biggest hotel is the Taj Mahal and based on its name I suspect a foreign investor. Here, most hotels also include regular entertainment centers. They have a theater, cinema, concert hall, swimming pool, etc., right next to the huge casino area. For example, we saw an ad for a Liza Minelli performance at one.

There was, of course, an amusement park on the beach and a large shopping center. 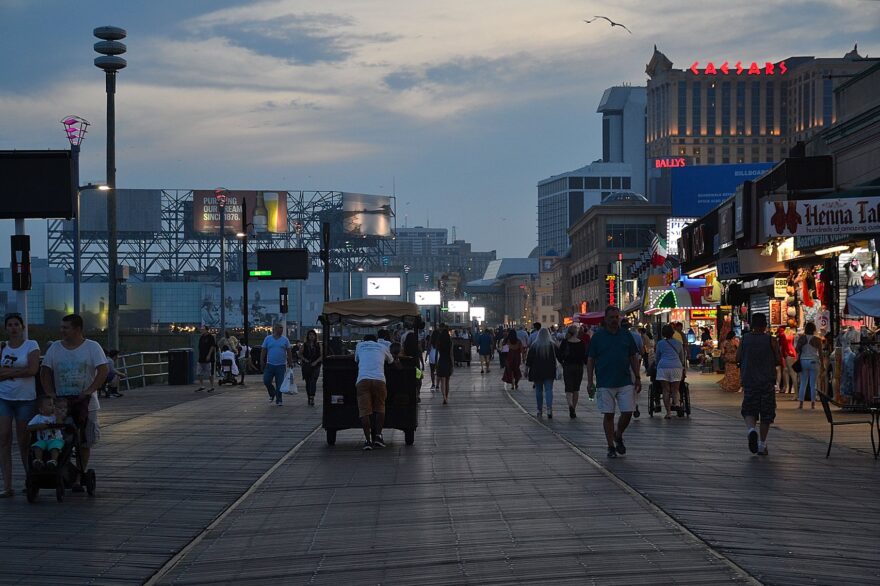 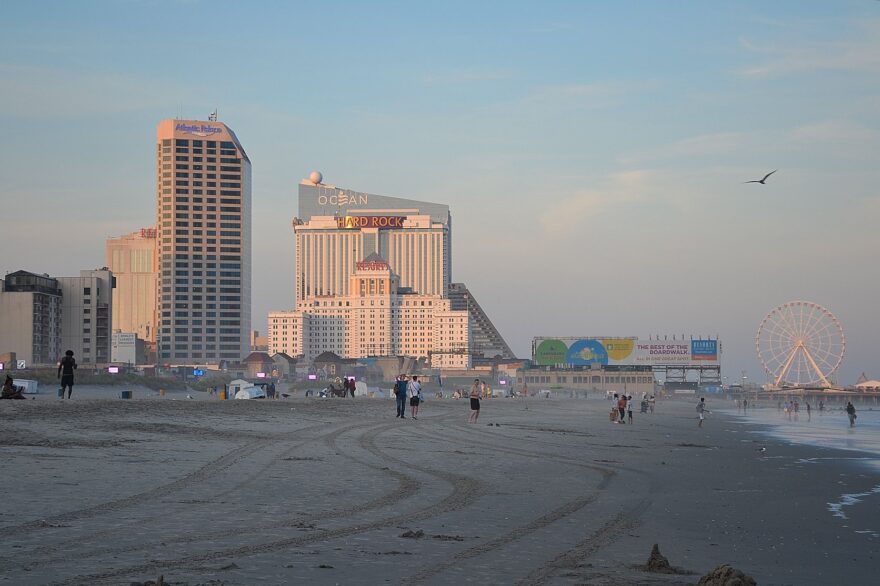 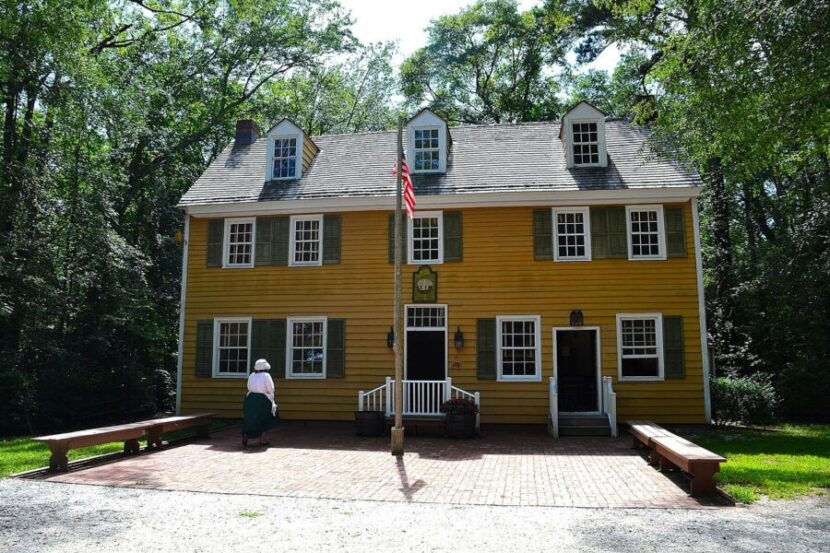