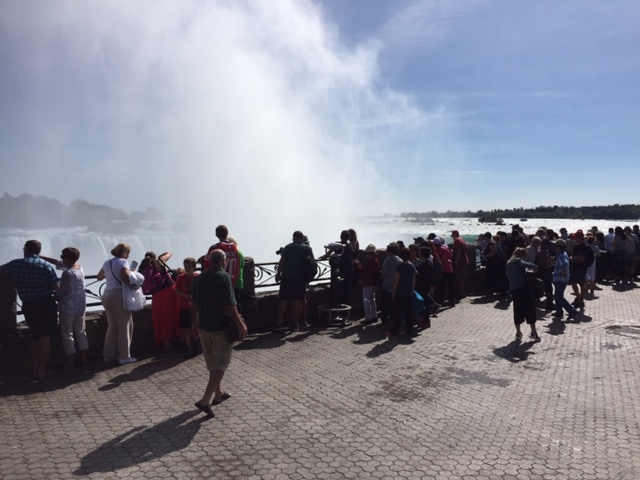 1. The view on the falls are more impressive from the Canadian side - a frontal, better angle

2. On the US side, the Terrapin Point offers the best photography angle

3. The thrilling boat tour: ,, Journey behind the Falls"

4. On the Canadian side the lovely walk down to the boats

1.Mass tourism with its all disadvantages (those loud tour groups)

3. The Disneyland and fun-fair character, more on the Canadian side

5. The illuminated falls show starting 9 p.m. - it is true that somewhat kitschy, excessive for my Central European taste

6. The surroundings of the falls are highly urbanized, with maximum attractions and amenities for visitors. However, this lessens a little the charm of the attraction. 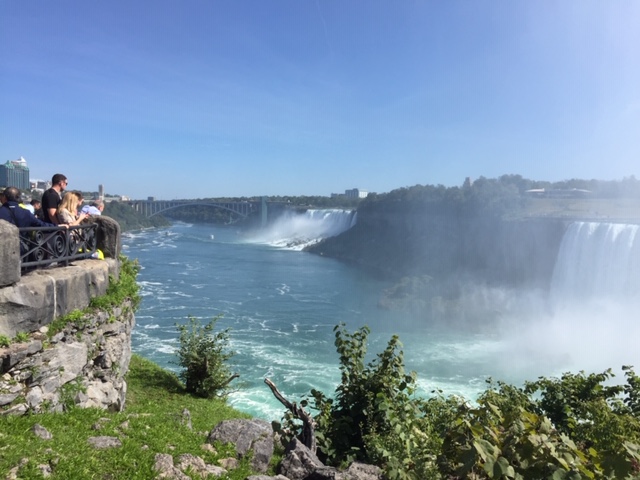 First off, it has to be said: The falls themselves are spectacular. The surrounding area, however, is a disgrace. How can I say such a thing? Well, let’s start with the megahotels, the waterpark, and the run-down go-kart track – and much more besides – which can all be found within a kilometer of the falls.

Unfortunately, none of my acquaintances who viewed the falls from the American side – not the Canadian side – felt inclined to use the word ‘spectacular’, and in fact, they hardly got a glimpse of the falls themselves. The solution? View these horseshoe-shaped falls from the The Canadian side, though it’s true that even there you’ll have to put up with a good amount of ugly tourist ‘development’.

“At first I thought all these people were here for the falls, but in a couple of hours, I saw more of the place, and began to realize that at most a quarter of visitors are actually interested in seeing the waterfall itself. I don’t know what it’s like in summer, because there must be a lot more tourists. (When I visited there weren’t even any boats on the Niagara River, for instance, so I couldn’t take a boat trip – one more reason to come back.) This is also one of the major crossing points between the United States and Canada, but it really surprised me how few people actually seemed interested in admiring the falls themselves, and how many went instead to the Palace of Miracles or Movieland. I soon forgot about this, though, because in spite of the skyscrapers and parks full of rotating, flashing lights, I couldn’t take my eyes off the Niagara Falls themselves. From the Canadian side, you can see both the Niagara Falls and the Canadian Horseshoe Falls, which is apparently a spectacular panorama. It may be more beautiful from the Canadian viewpoint, but I didn’t see Niagara from the other side. 😊 (2018) 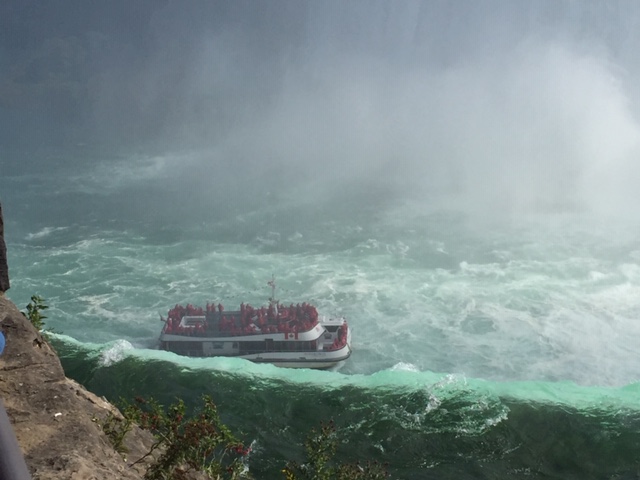 1. Be sure to bring a raincoat! 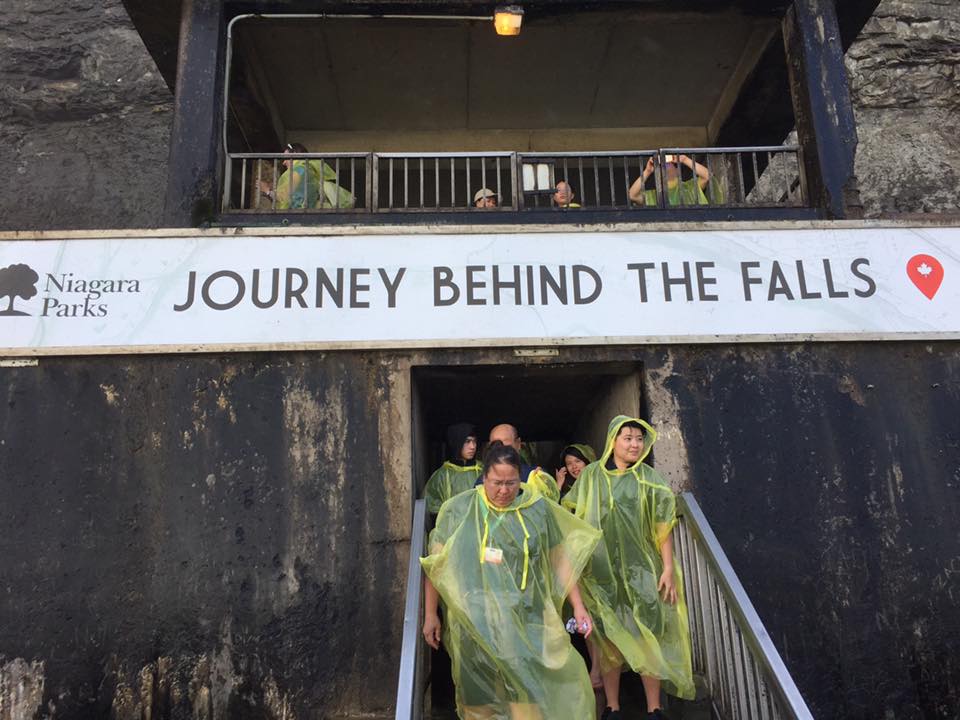 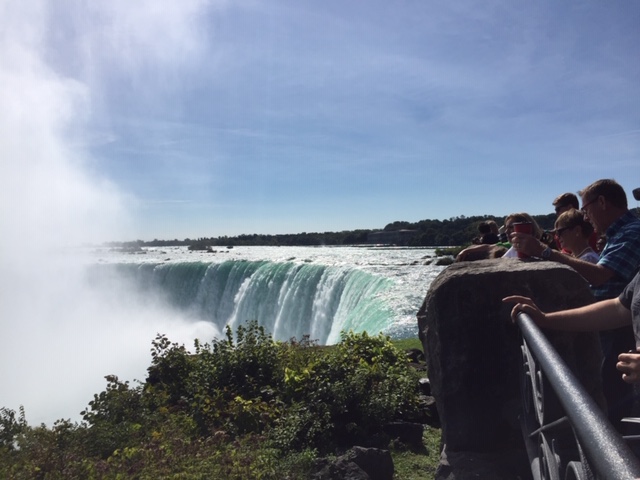 The Niagara River, which connects Erie and Ontario Lakes, falls to a depth of 17 meters (57 feet) at the waterfalls. There are two smaller waterfalls on the American side and one larger one on the Canadian side.

Niagara Falls actually means 3 waterfalls: The American Falls, The Horseshoe Waterfall, and The Bridal Veil Falls (the smallest of the three).

If you want to watch both sides of the waterfalls, go (by car or walking) on the Rainbow Bridge, provided you have entry permits for both countries.

Visiting the waterfalls on the USA side is free.

The falls are visible from both countries, but the best views are on the Canadian side. 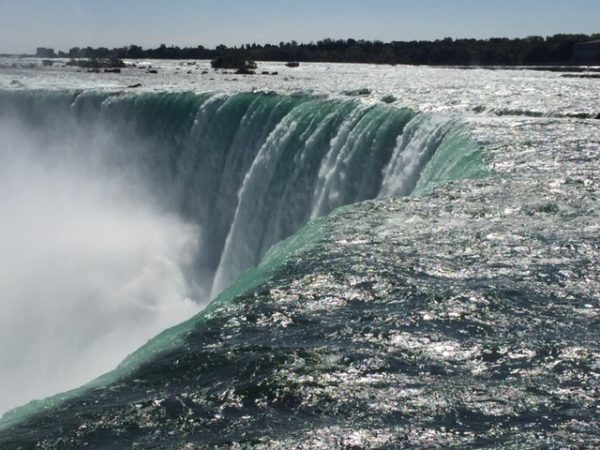 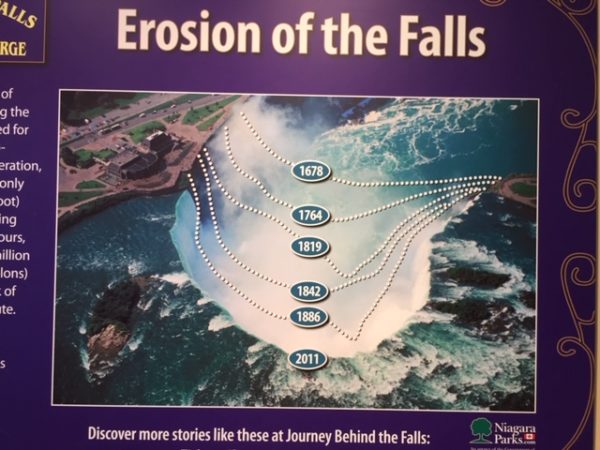 Niagara Falls - Erosion of the Falls 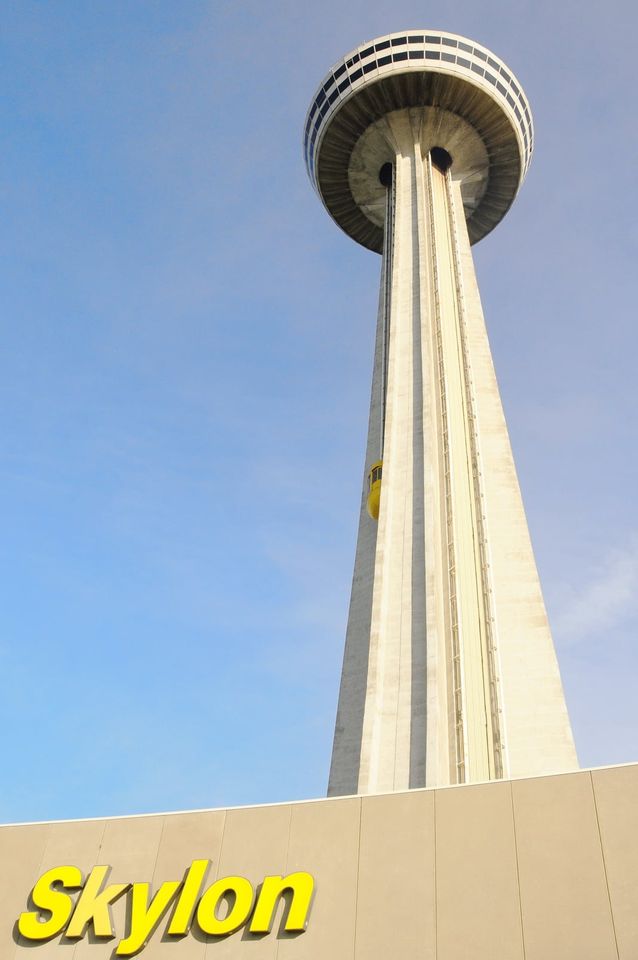 This is a large observation balcony that overlooks the horseshoe-shaped Canadian Falls. Access is free and this is where you see the waves of the Niagara River rushing into the void at astonishing speed. This is also where the main tourist information office is located for visitors. You can get there on foot from the Rainbow Bridge, which takes you from Canada to the United States: it makes a lovely 1.6km walk along the river through Queen Victoria Park.

We highly recommend these tours as they are probably the essential attraction! The boat gets as close as possible to the falls, and you find yourself in the heart of this disproportionate aquatic whirlpool. Rain ponchos are provided, but beware: still, you surely get wet! Protect your electronic devices if you have them with you.
That is a seasonal activity: the boat operates from the beginning of April to the end of November.
Tip: book your ticket in advance to avoid queuing. FYI, there are two companies: the Canadian side is the "Hornblower," and the American side is the "Maid of the Mist", but the content of the boat tour is the same. 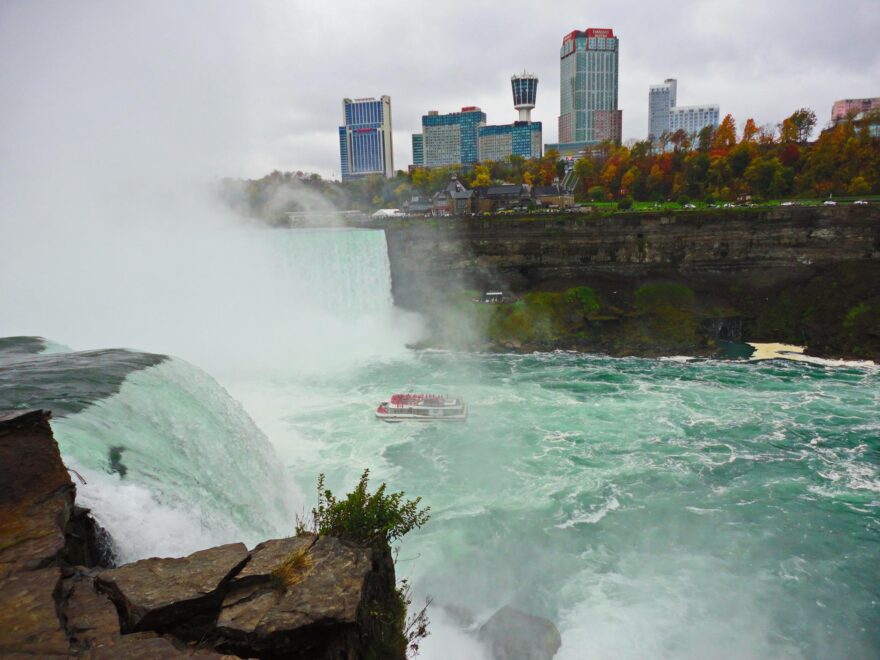 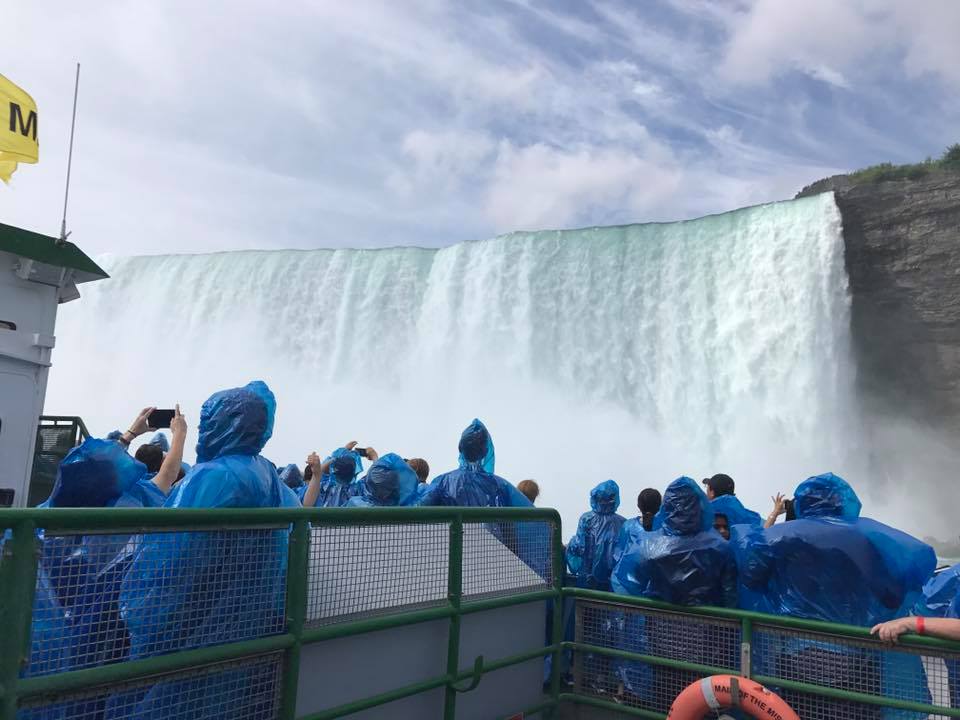 Journey Behind the Falls

An elevator brings you down to the very bottom of the falls, where tons of water crushes. You find ourselves walking in damp undergrounds to finally come out on a platform at the foot of the rapids. Like on the boat, shower effect guaranteed!

It's a walk along the rapids. You descend with an elevator to a wooden footbridge that runs along the raging river. Very impressive to see up close the tumultuous waves of these class 6 rapids (the maximum), among the most dangerous in the world.