1. It’s worth walking, even for a whole day, up and down the hilly streets and looking at the adorable houses

2. The atmosphere of the city has an enviable charm

3. Catching a first glimpse of the Golden Gate Bridge, and feeling your breath catch

4. Crossing the bridge to Sausalito and feeling faintly jealous at the lifestyle of its inhabitants

5. Finally deciding that paying for the Alcatraz Prison tour was worth it

6. Getting confused by the huge range of food available at the Ferry Building Marketplace

7. Taking the historic F-Line streetcar right through the downtown, from the Castro District to Fisherman’s Wharf

8. Watching the locals at the weekend as they relax and enjoy themselves in the parks

9. Deciding that San Francisco is one of the most wonderful cities in the world

11. Lombard Street, ‘the crookedest street in the world’. It’s great fun to stand at the top and see the looks on drivers’ faces when they see where and how they’re going to have to drive to get to the bottom. Even funnier with Segways.

1. Awkward to say, but there are an enormous number of homeless people and beggars in San Francisco, and this does pose a certain inconvenience to passers-by

3. Hardly anywhere to park, and parking at a hotel costs between $40 and $60 per day

4. The hilly nature of the city makes it exhausting to explore on foot, though it’s more than worth it

5. There are some areas which feel unsettling from a public safety perspective, even downtown

6. The weather is very unpredictable. There’s often fog (almost every morning, in fact) as well as a lot of wind, and even in summer the evenings can be cool

7. Drug dealers on the streets

8. Too many speed bumps

9. The Chinatown here is much more interesting than in New York, but even here it gets boring after fifteen minutes

10. A shame that such a loveable city should be so damn far away 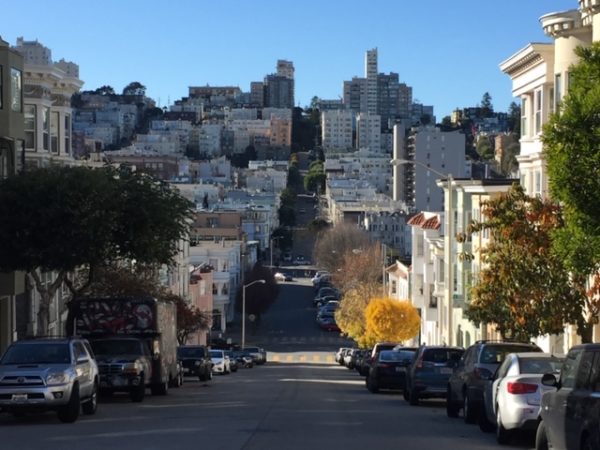 “One of the most densely populated American cities. A lot of people told me that San Francisco blends American and European cultures in a strange mixture, and after two weeks here, I can see what they mean.
The city is almost unbelievably diverse. There are many Asians, with Chinese, Korean, Japanese, or Singaporean backgrounds. I spoke to Nepalis, New Zealanders, Australians… There are also lots of Europeans, South Americans, Mexicans, Filipinos, and Thais. The point is, the sheer range of people is pretty inspiring.
On the street, you see a lot of colorful personalities every day. My favorite is the guy who rides around in an electric wheelchair, blasting loud music from a boombox. Sometimes it’s Backstreet Boys, or Pitbull, or even a little Spice Girls, just to put a smile on people’s faces. Works every time.” (2018)

“I’ve heard from many that in San Francisco, American style mixes with a European influence to form a special mix. After two weeks, I can tell you there is something in this. This place is so diverse that it is almost unbelievable. There are a lot of Asian people, including Chinese, Koreans, Japanese, and Singaporeans. I talked to Nepalis, New Zealanders, and Australians. There are also plenty of European, South American, Mexican, Philippine, and Thai people. So my point is, the mix of people is quite inspiring.

On the street you can see lots of colorful personalities every day, my favorite is the man in the electric wheelchair who rides through the city with a speaker, of course with roaring music, sometimes Backstreet Boys, Pitbull, or just a little Spice Girls. The point is to put a smile on your face, and it works every time.

You can finally have a good coffee here! Anyone who has followed the posts so far may know that crappy American coffee breaks my heart :). At last, I can report that the search is over – there are cafes here that are just mwah!

The downside for California is that the taxes are very high, almost 10%, so life is not cheap, but you get what you pay for!”

“I think I can say without exaggeration that almost everything is allowed here. I mean, obviously, there are laws like everywhere else, but somehow people here don’t seem to mind about abiding by them or making sure others abide by them. Maybe it’s just that nobody cares. With this, San Francisco can be said to be true to itself, as the city was once a stronghold of hippie culture.

Other characteristics include clouds that almost touch the top of your head and fog that can suddenly swirl in from one hour to the next. It is a common image that the city swims in sparkling sunshine, but at the same time, the roofs of the skyscrapers and the surrounding hills and districts are not visible from the greyish-white mass. This phenomenon is due to the ocean, as is the fact that there is rarely a real heatwave in Frisco. The sun shines a lot, but the wind also blows, so it doesn’t feel too hot, which means it doesn’t hurt to keep some sunscreen handy if you don’t want to end up as a barbecued chicken.

San Francisco is built on a range of larger and smaller hills, and the streets run straight up and down them, giving the city a very special look. In one direction, the road disappears up into the clouds, while in the other it runs down into a large valley, and then climbs up the steep far side. Just like a roller coaster. We used every possible option to get around: on foot, by public transport, by bicycle, and by car.” (2017) 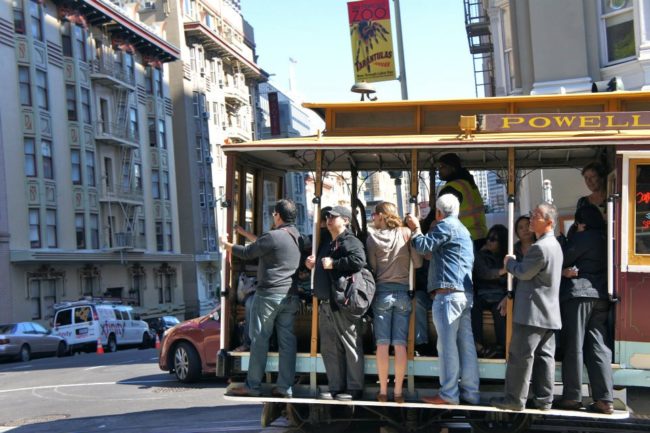 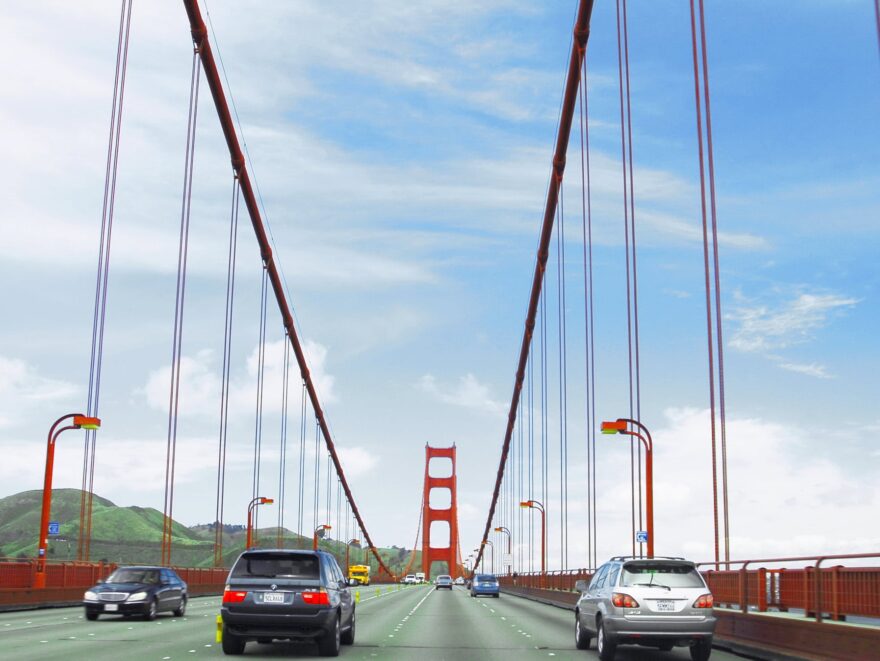 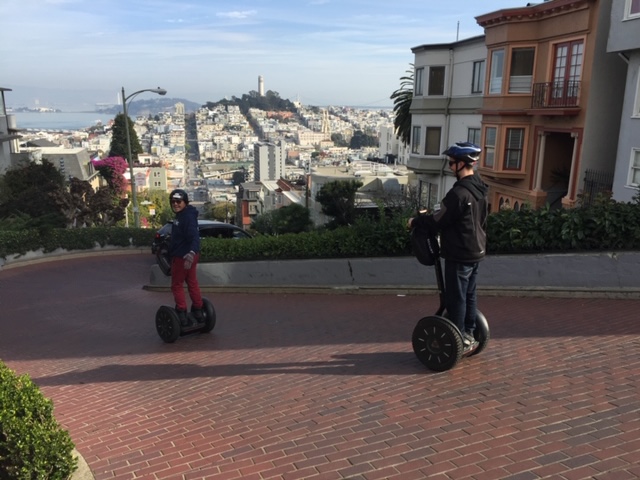 San Francisco is walkable. There are no terrible traffic jams when you're on foot. The exercise, especially going up and down hills, means you can shed a good bit of weight.

Transportation is expensive, except for the bus, where you’ll want to take a shower or two right after.

The Uber and Lyft drivers are crazy and block the streets, 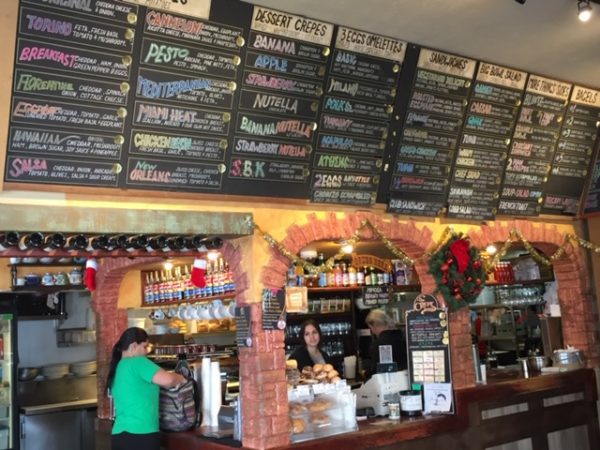 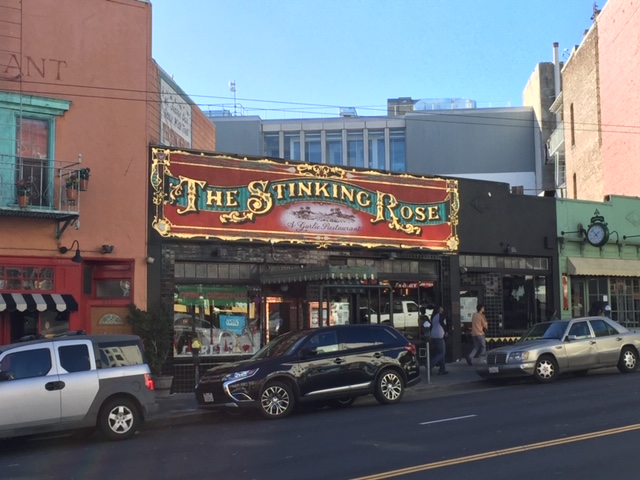 Over the last decade, the nightlife has been pretty much wiped out. Most clubs are out of business. More and more people prefer Netflix, ordering food in, social media, and swiping on dating apps over going out. More and more people prefer to go to bed by 10 pm to get up early and work out. This obsession with working out and fitness also affected nightlife.
Every since women had less to no incentive to go out since they can get all the attention they need on Instagram and Tinder, they pretty much stopped going out. And if the women are not out passing 9 pm, men have little reason to be out as well.(2020) 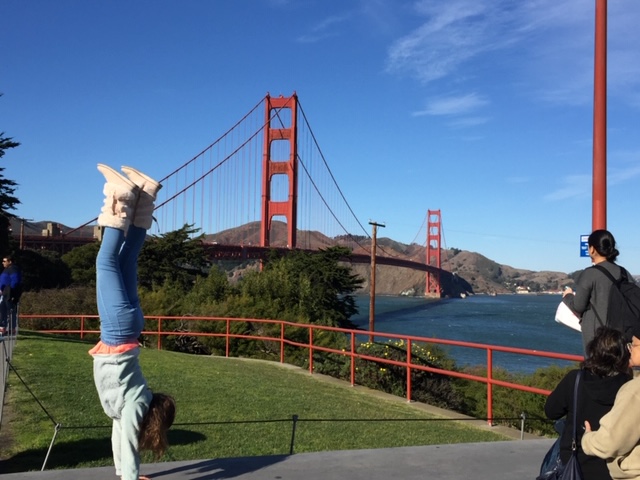 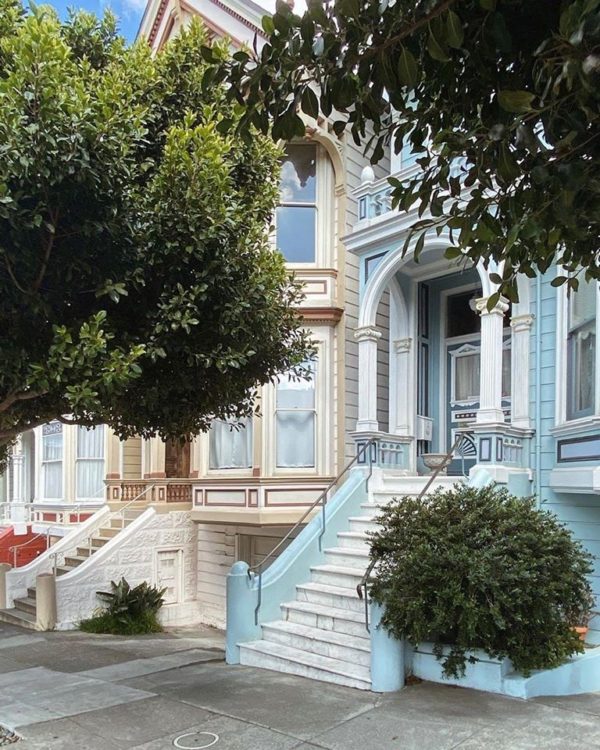 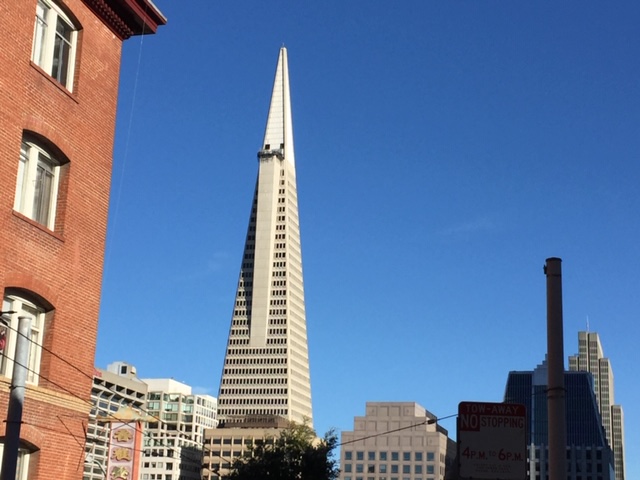 San Francisco is in Northern California.

Locals don't call it Frisco or San Fran anymore. They say either either 'The City,' 'San Francisco' or, most commonly, 'SF.'

The average monthly rent for a one bedroom apartment outside of the center is 2800 USD, the same in the city center, 3500 USD

The City has a nearly 10,000 homeless population, mostly hanging around on the central streets.

The temperature can change if you go from one neighborhood to another. As a general rule, it’s always spring or fall. Your appropriate traveler outfit should contain 2–4 layers that can be easily removed and put back on.

85% of the cars you see are Ubers or Lyfts. Most people who live and work in SF don’t have cars.

San Francisco is always irritatingly chilly.  The weather is utterly depressing during the summer. Sure, San Franciscan winters are balmy compared to winters in many other places, not dropping below 4C (40F) degrees and hover around 10C (50F) most of the time. Still, summer temperatures also hover around 10C (50F) degrees.  That's the upsetting part. And the wind never stops. So you'll rarely get to wear a T-shirt outside, even in July.

San Francisco - Alcatraz, former prison island - Al Capone may have passed the solid waste from his body into a similar toilet, if not exactly into this - K Elter photo

This is definitely a city of have and have nots. You have a group that is very affluent who own multi-million places and shop and dine out. Then, you have the regular side that struggles to afford their rent and can’t even afford a car. Don’t be fooled by all the people loitering, SF is one of the richest places in the country. It’s just that is skewed in it’s wealth distribution. 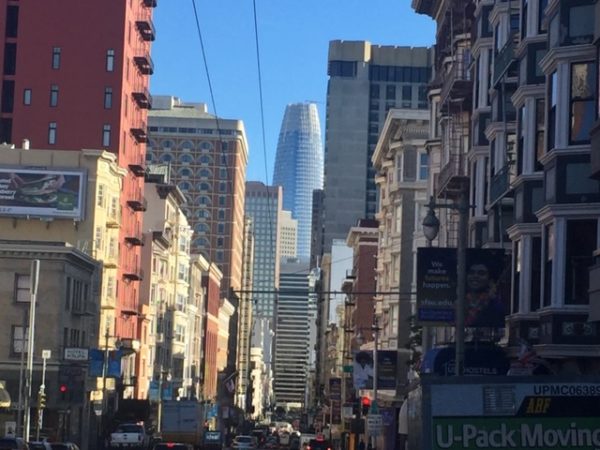 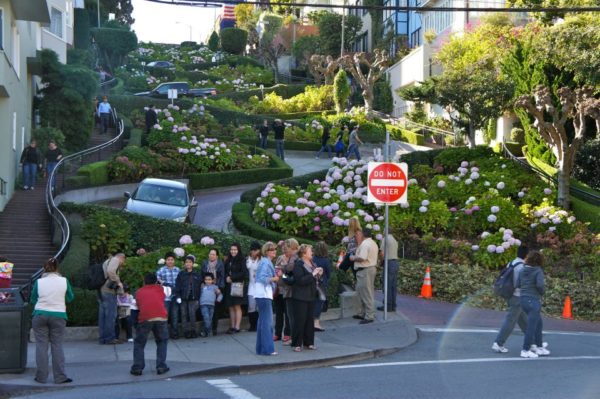 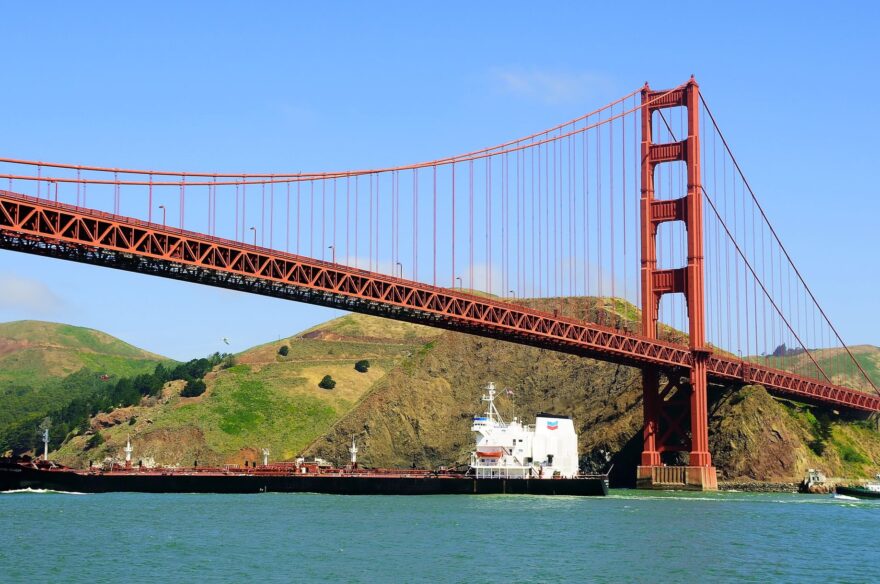 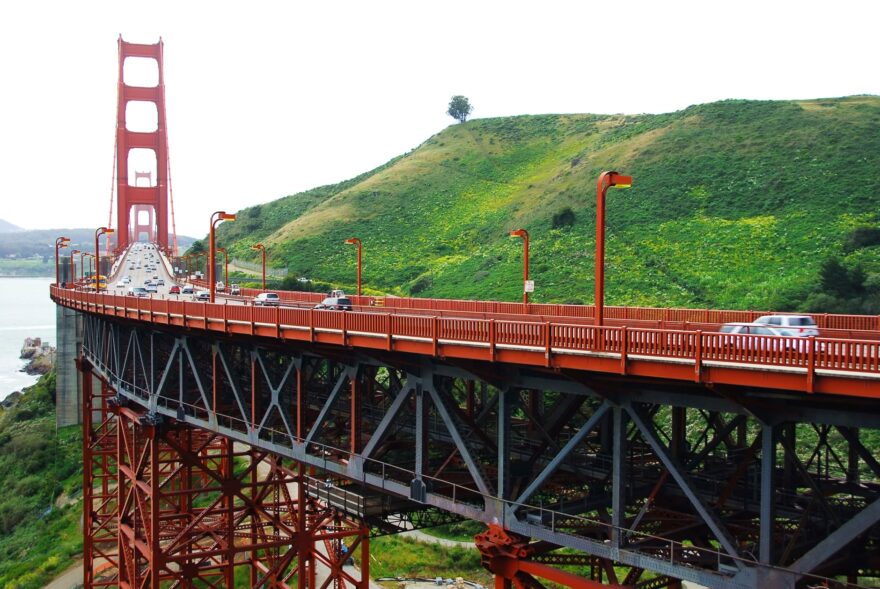 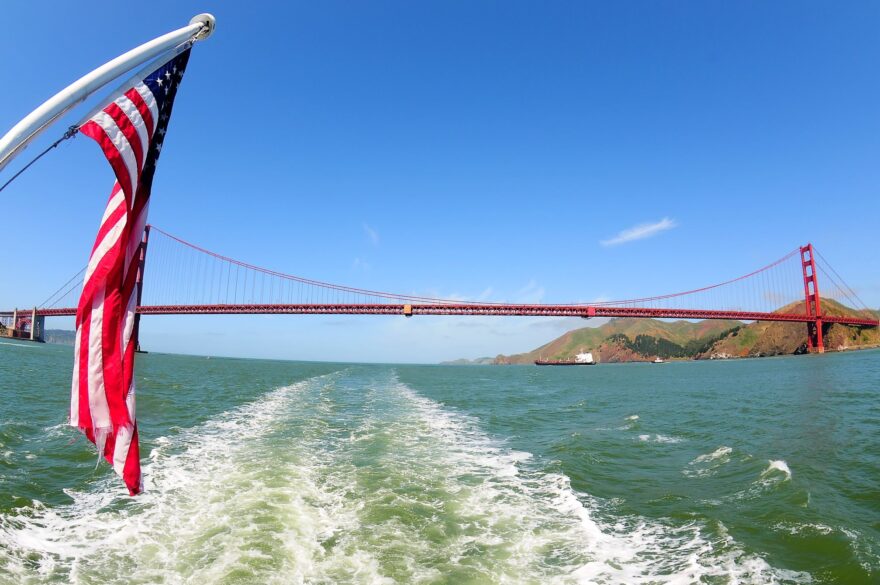 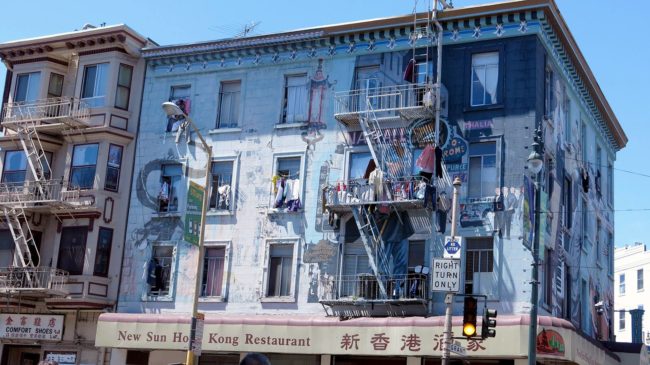