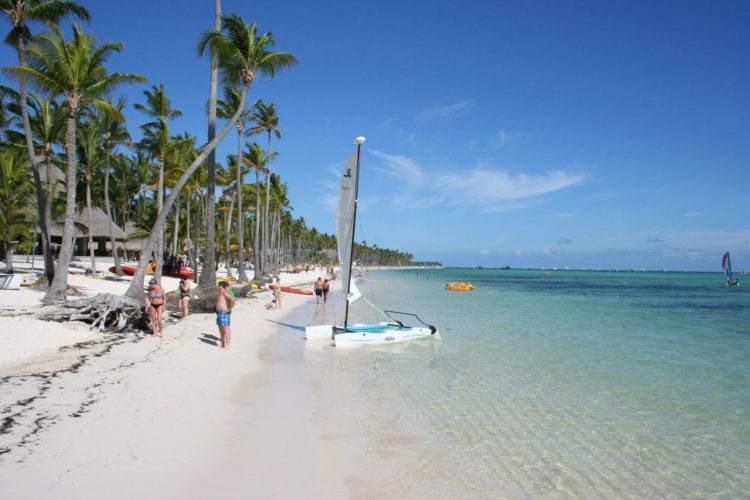 1. The postcard beaches of Bavaro and Punta Cana – the palm trees bending over blinding white sand were exactly what we had imagined before coming here

5.Cheaper than Mexico and most of the touristy Caribbean islands

6. Santo Domingo is a great one-day program with a lot of cultural historic sights - the colonial Old Town is a UNESCO world heritage site

8. Not a crowded country, plenty of space, untouched nature

4. Caribbean lethargy, mess, disorganization (except in the top resorts)

6.  The tourist regions have little to do with the realities of the country

8.  Public safety is not as good as in Cuba – parts of Santo Domingo are unsafe after dark

9.  A rainstorm may spoil a few days of the vacation

10. The piles of seaweed on many beaches in Punta Cana 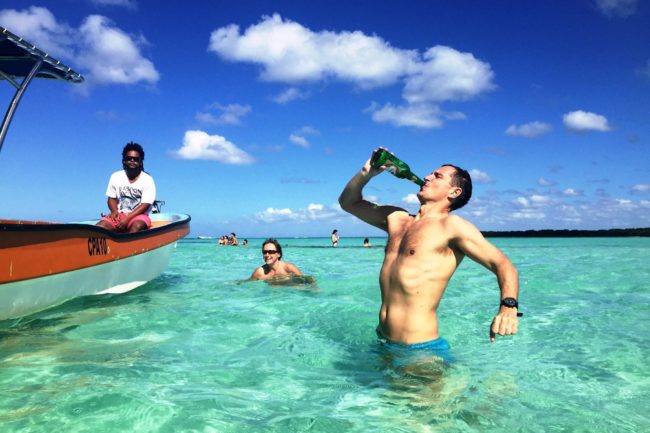 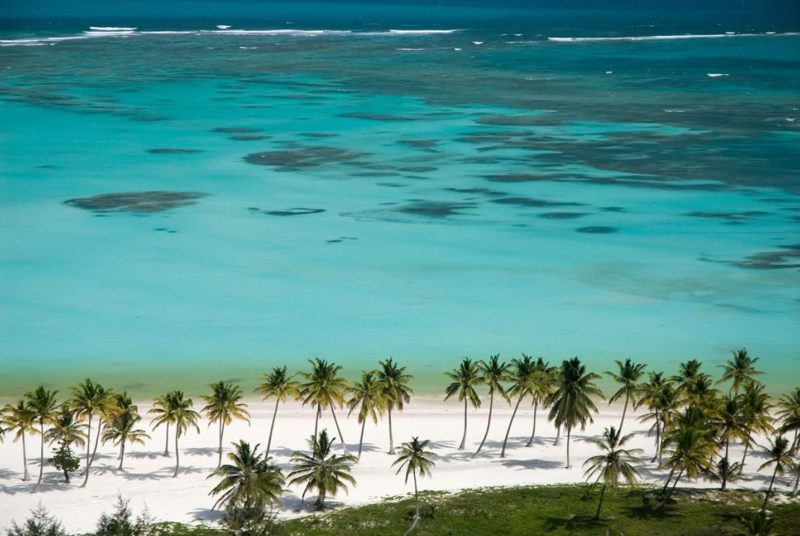 “I’m so glad to have visited the Dominican Republic. The beach was even more beautiful than I had dreamed. The white sands, leaning palm trees and magical, shifting turquoise of the sea were a captivating combination. What’s more, the beaches were much broader and more spacious than at Varadero, in Cuba. I found Bávaro much prettier than most of the beaches at Varadero, and long walks along the beach were also more pleasant here.

We took an excursion to Santo Domingo. It wasn’t nearly as sensational as Havana, but it’s rich it was in historical monuments, and I like colonial architecture. We were also able to enjoy the rich natural landscape during our journey.

What were the dislikes?

•    The national parks were far less attractively presented than in the USA, though of course the two countries are at totally different levels in terms of resources.
•    It was a shame that there were no opportunities to mingle with the locals – the hotel area is a sort of vacation ghetto. You can feel that life here is freer than in Cuba, but somehow the poverty appeared even more alarming (there are a lot of destitute areas).
•    The Dominicans themselves didn’t strike me as either particularly friendly or unfriendly. Tourists are likely to meet some con artists, as they tend to latch onto visitors.
•    I didn’t like the ‘mass-tourism’ feel of the hotel – it was very impersonal, and the crowds at the buffet were like a herd of cattle rushing for the trough. Also, a few days were washed out on account of rain.
Dominica is well worth visiting just for its beaches. If you’re not looking for much else (and you can bear the volume at which North American tourists talk to one another – even worse than the Germans) then it’s an ideal destination. Still, Havana makes Cuba a more interesting destination, and the same goes for Yucatan, on account of both the Mayan ruins and the nightlife at Playa del Carmen.” (Sándor, 2017)

The beaches are the main attraction in the Dominican Republic – it’s no exaggeration to say that they are among the most beautiful in the world. The country’s coastline is around 1,600km long, and of course only a very small proportion of that has a strong tourist presence.

The sea at beaches directly in front of hotels is generally very clean, but “standard conditions” can be very different. On some beaches, you have to be careful to avoid sharp rocks when getting into the water. Seaweed is found in many places, and while it can be cleaned up if it washes ashore, if it’s in the water it just has to be accepted as a fact of life.

The beaches near hotels are often overcrowded in high season. It’s good, however, that there are relatively few pushy purveyors of sun loungers and beach umbrellas

There are no nudist beaches in the Dominican Republic, and it is forbidden to swim naked anywhere. Indeed, it’s not even recommended for women to go topless (you’ll see the eyes of local men open wider than you thought possible…)

The beach at Cabarete, on the island’s north coast, is a perfect place for windsurfing and kite surfing. The beach at Puerto Plata has very fine, coral sand.
In the east is the ‘Costa de Cocos’ or ‘Coconut Coast’, which has spectacular, palm-fringed beaches where you can walk for hours.

About 20 minutes’ drive south of the capital, Santo Domingo, lies the spa town of Boca Chica. This beach is very suitable for families with young children

The beach at Bayahibe is very tranquil, and from there you can take a motorboat across to Saona Island, part of the Este National Park. I mention this because the beach on this island is considered by many to be the most beautiful in the Dominican Republic! A wide shoreline, natural and undeveloped, and with dazzlingly white, coral sands. It is also a fantastic spot for diving. 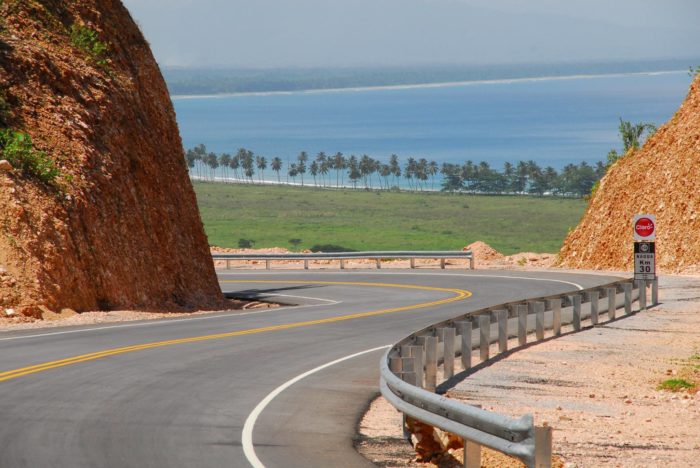 Dominical Republic - on the way to Nagua - r.t. photo

Don't over-tip, and don't pay the asking price. Bargaining is part of their culture. 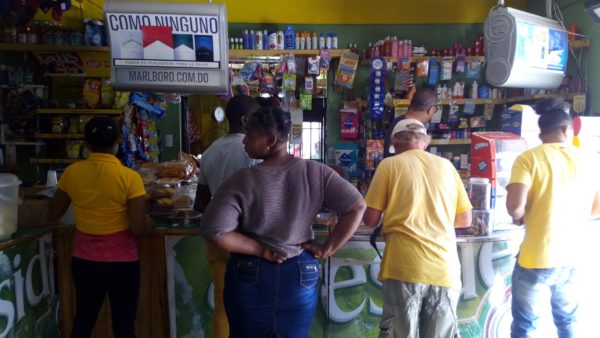 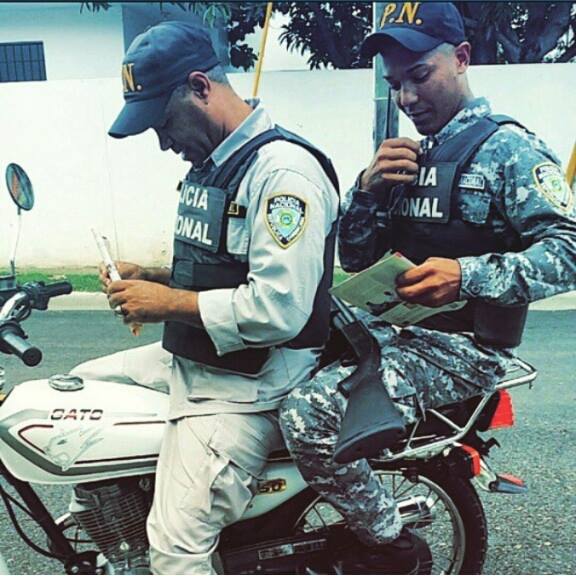 “It’s worth applying a lot of high-factor sunscreen, as well as lotion and insect repellent (cockroaches, mosquitos and spiders are omnipresent in these zones). Try to have a telephone app downloaded which can translate into the local language, even when offline.

In terms of medicine, bring the usual aspirins and antihistamines, as well as anything specific against lumbago, varicose heart etc. A neck pillow is essential for those who have already become accustomed to them, and elastic stockings (even for young people) help to protect against varicose veins and swollen feet on long flights.

Bring some granulated, three-in-one coffee too, so you’re ready for anything. It’s important to check the voltage and plug situation before you leave home, because it seems that there are as many different systems as there are countries. I can never seem to bring enough clothes when I travel, but remember only to bring practical, comfortable things! Tropical storms can always surprise you, so have a plastic poncho or a raincoat with you.

Don’t leave your phone charger at home. Oh, and one more thing: those with sensitive ears should remember to bring earplugs, because dirty seawater can cause infections. Also, goggles at a minimum for diving. 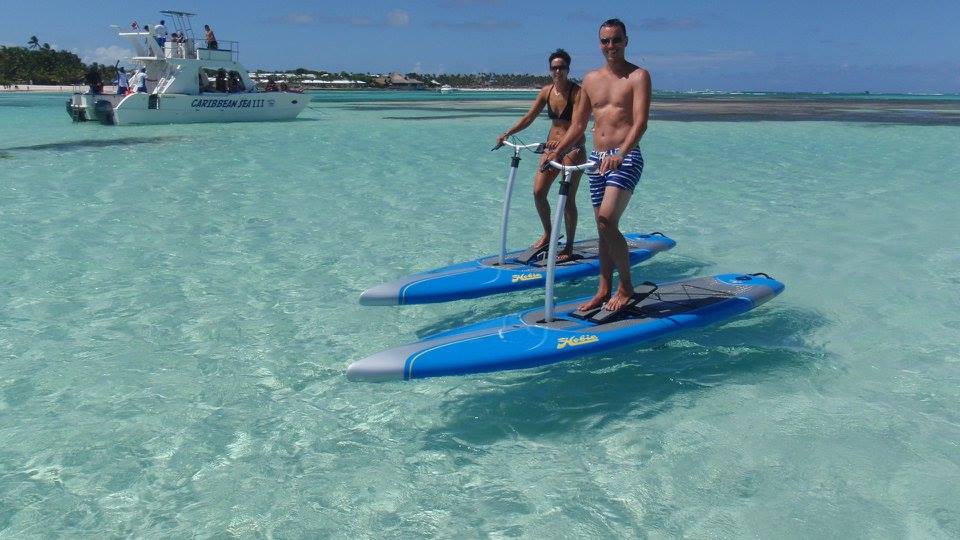 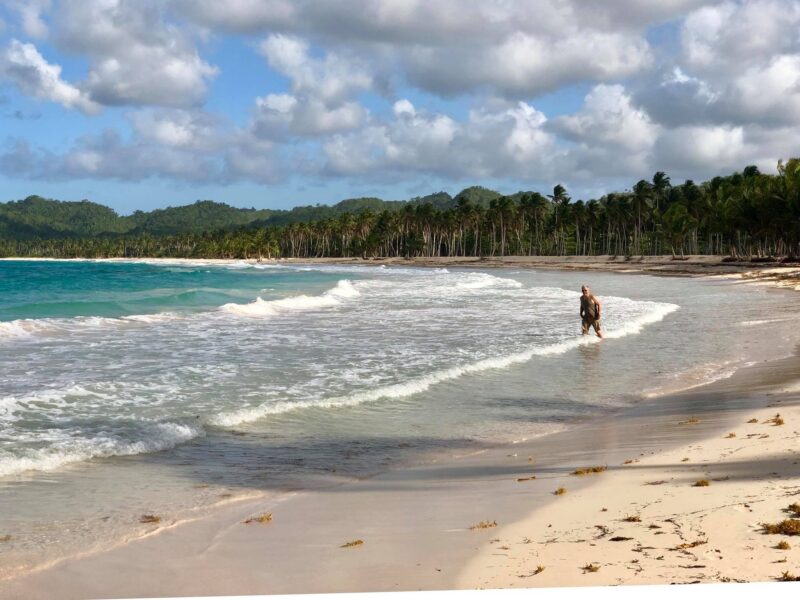 The Dominican Republic shares the Hispaniola island with Haiti.

Population (in 2020): 10.8 million - 72% Mulattos (mixed African and European (Spanish) descent), 16% Blacks, 12% Whites. During the early colonial period, indigenous Taíno-Arawak communities were part of the overall population, but the Spanish colonialists killed them all.

If the tourist looks around this Caribbean nation, it quickly becomes clear that the difference between the tourist areas for foreign visitors and the world of ordinary Dominicans is like night and day. The country is in principle a democracy, though this political system isn’t exactly an exemplary model (the main parties are thoroughly corrupt).

Though the Dominican Republic is richer than its single neighbor on the island, Haiti, it is still a poor country by global standards. The economy used to be based large sugar plantations cultivated by black slaves, but now banana and coffee are the primary crops.

Hundreds of thousands of Dominicans live as immigrants in North America, and dollar transfers to their relatives back home are a major source of revenue for both the country’s citizens and the state.

Some of the black people in the Dominican Republic are natives – the descendants of the plantation slaves – but many have emigrated there from neighboring Haiti, where the majority of the population is black. These Haitian guest workers and illegal immigrants from Haiti face considerable prejudice from Dominicans. This is not merely on account of their skin color – Dominicans as a rule both pity and despise their impoverished neighbor to the west.

“There is a huge disparity in wages, since the majority of the population earns a monthly wage which might, at a stretch, pay for one night at an average hotel. For one person, with breakfast at most. A shop assistant might earn $200-300 a month.
There are two types of Dominican: poor (very numerous) and rich (scarce). Of middle class professionals and intellectuals, however, there are almost none, since low wages make it extremely difficult to succeed through honest wages alone.

Even policemen here don’t earn much: their pay is around $200 a month, which isn’t nearly enough to live on, even if you allow that one dollar will buy you 10-20 terrible-quality bread rolls, for instance. That’s why even on a Sunday (Domingo in Spanish – the day of the Dominicans) the policeman reports for duty. When his wife has chivvied him out into the street, he puts on his mask of weary martyrdom. Of course, it isn’t the state he works for, but rather his wife and his unbelievably large family. Dollars slip into his pockets, and his family is happy.

There is no state pension, nor welfare provisions of any kind, and given that you have to work long hours for little pay, the grandparents generally care for the children while the parents go to their jobs. Many parents live in a different city to their children, and are only able to come back and see them once a month, or sometimes even less frequently.

Most children finish primary education at most, and many only a few grades. Often it is only the older children who go to school, and they in turn are responsible for educating their younger siblings: it’s generally enough for jobs that don’t require professional expertise. In any case, state schools don’t make much sense – with 60-70 children in a class, a child would learn as much by getting a job.

Many Dominicans have made their way to the United States in search of a better life. There are 3-4 million Dominicans in the US, and while of course some become top baseball stars and singers, most end up slaving away day and night in underpaid jobs. Most of what they earn is generally sent home, so that they become essentially the family breadwinners. At Christmas time everyone comes home, rum and money flow, and it can happen that some never go back. Some even end up in the cemetery – which goes for both rich stars and ordinary people. Cocaine and rum are not very selective.” (2017) 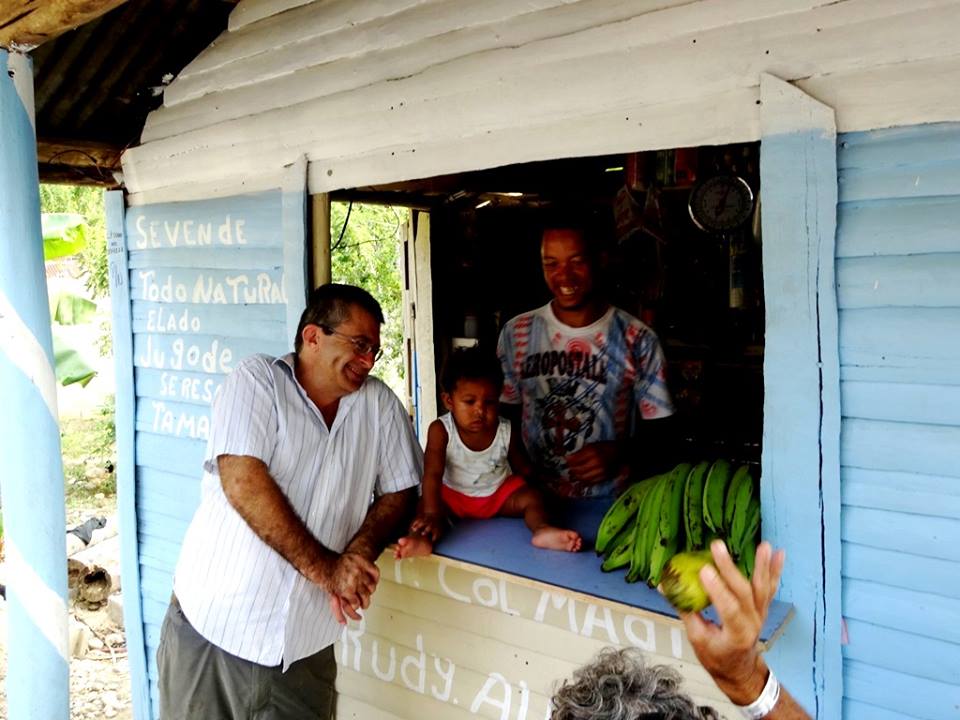 Dominican Republic - this kind of simple convenient stores are called colmado by the locals - w.a. photo 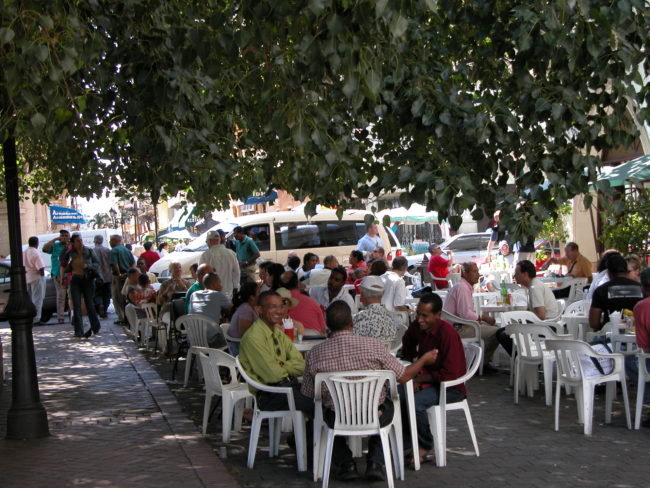 Dominicans eat a lot of rice and beans. A classic local meal is the fried plantain with a salad (usually tomato and lettuce) and an optional cut of meat (chicken, pork, or beef).
Another popular dish is the Chinese fried chicken with (again) fried plantains. 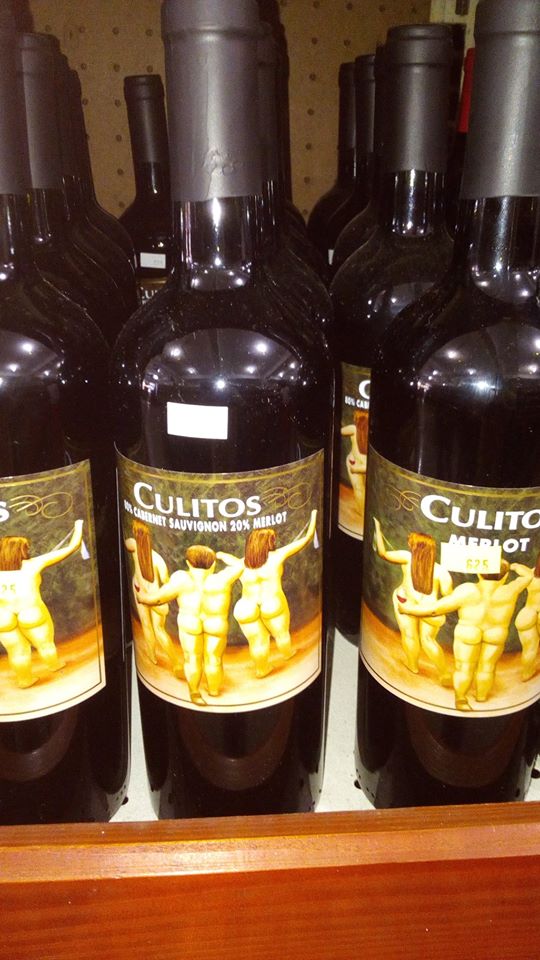 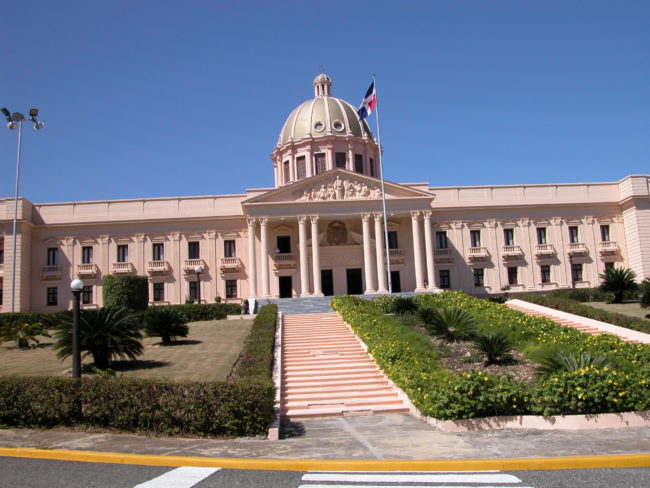 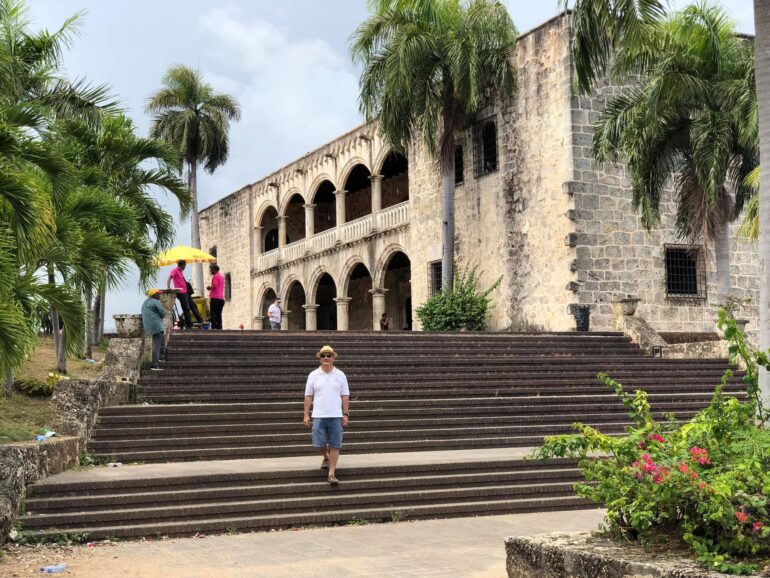 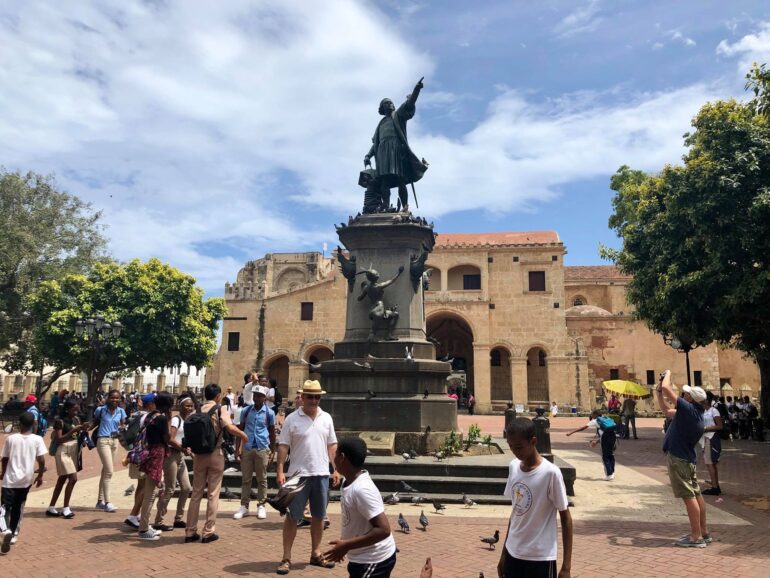 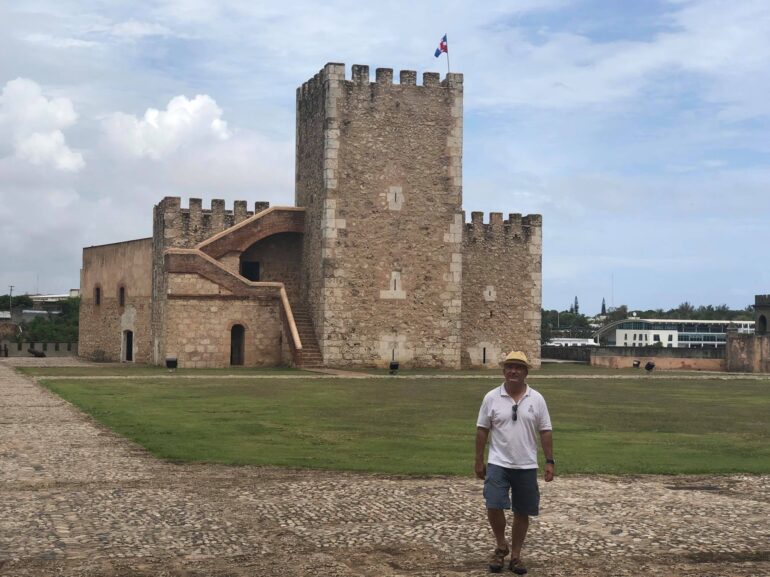 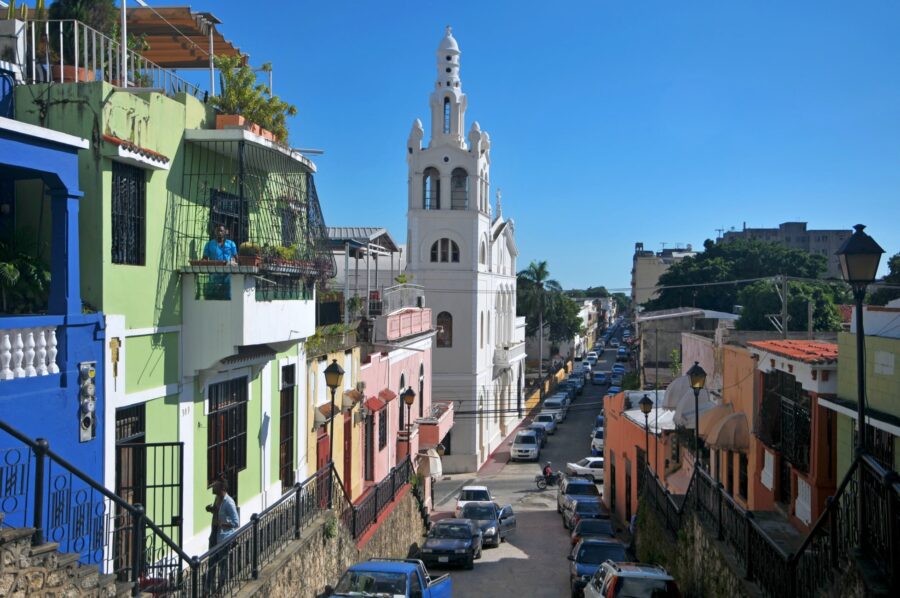 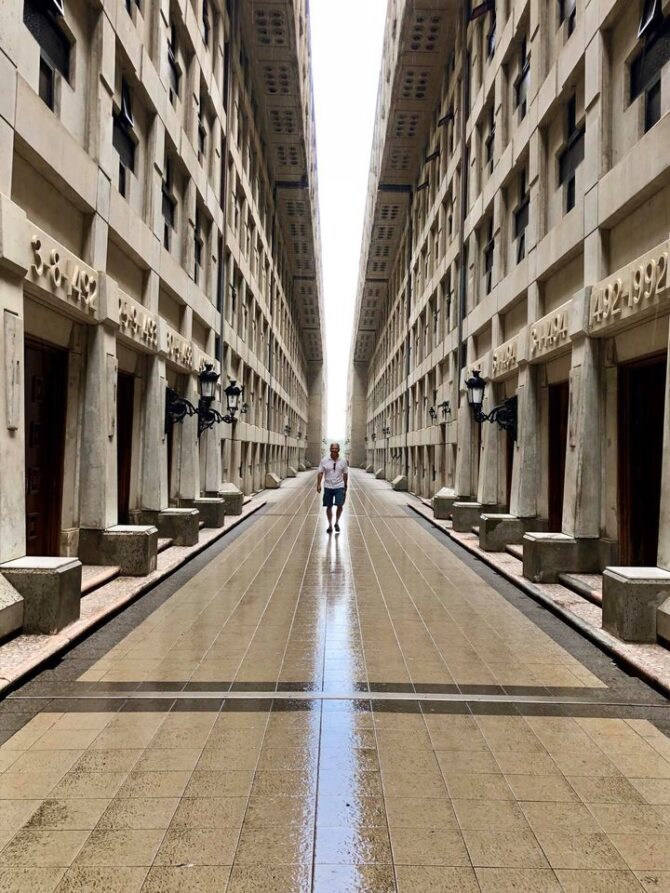 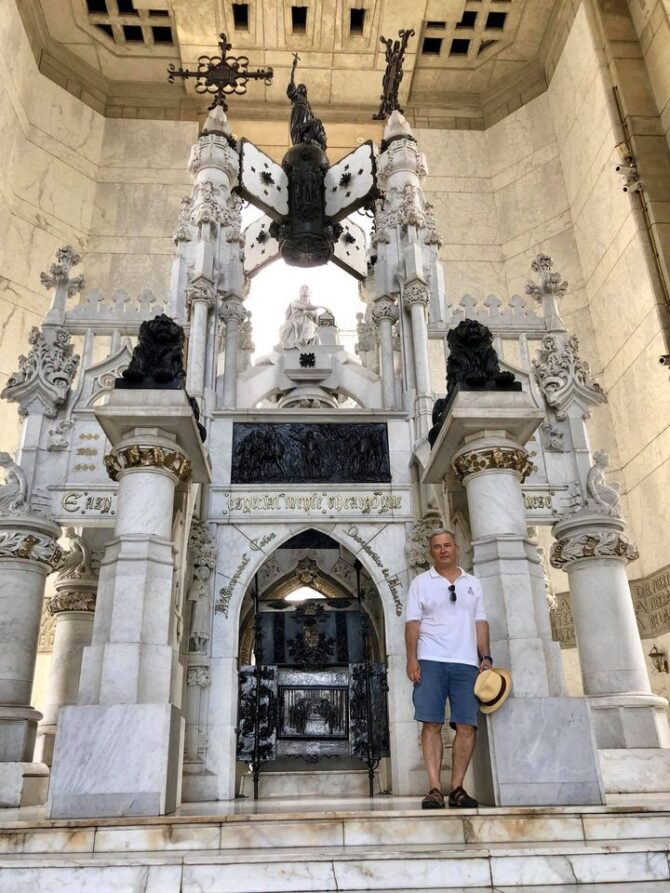 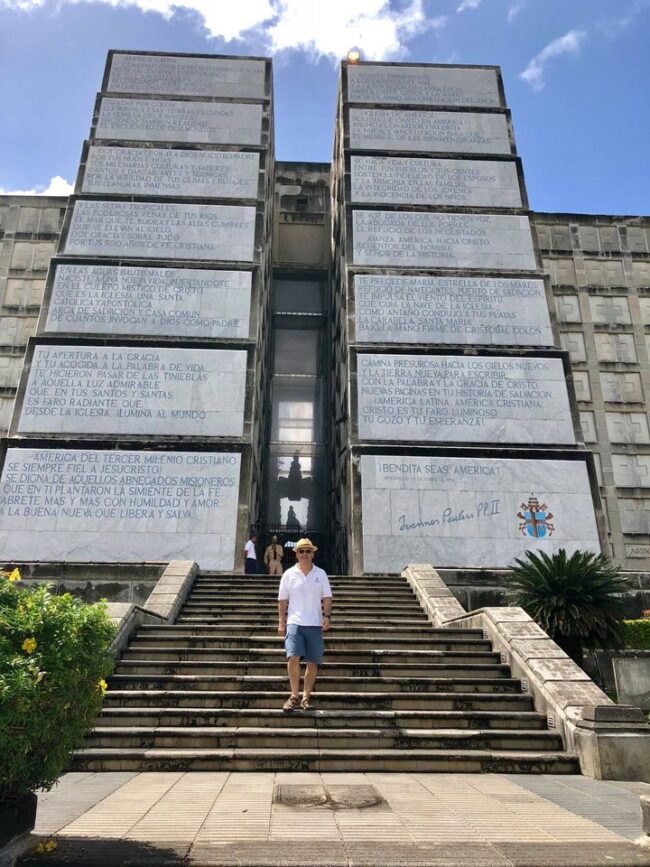 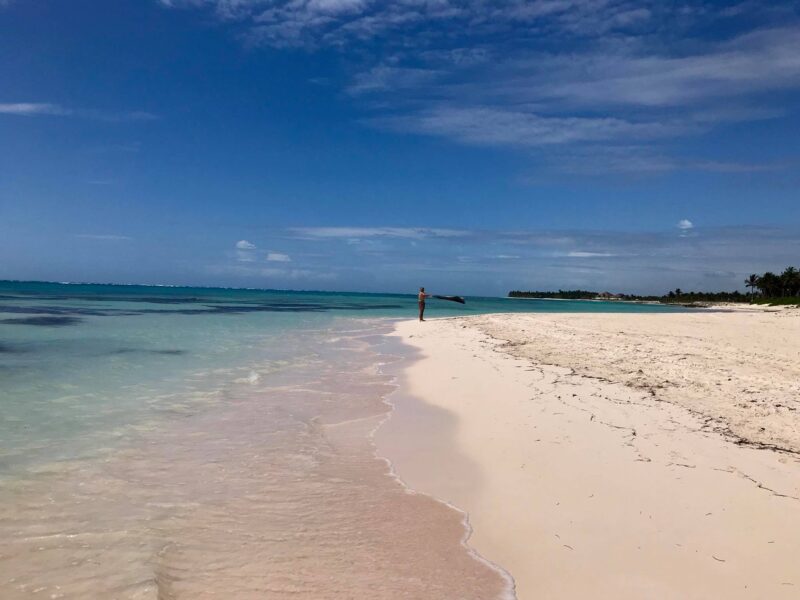 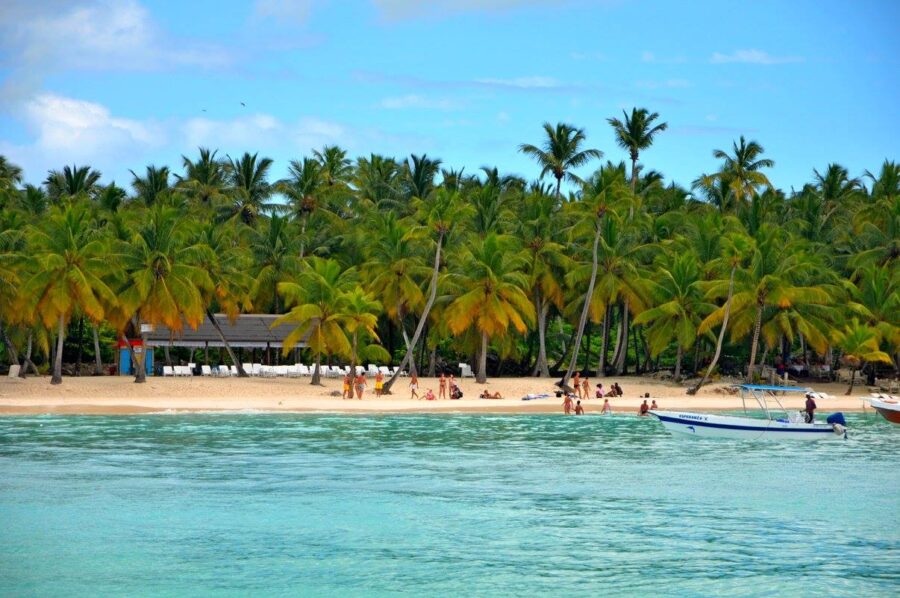 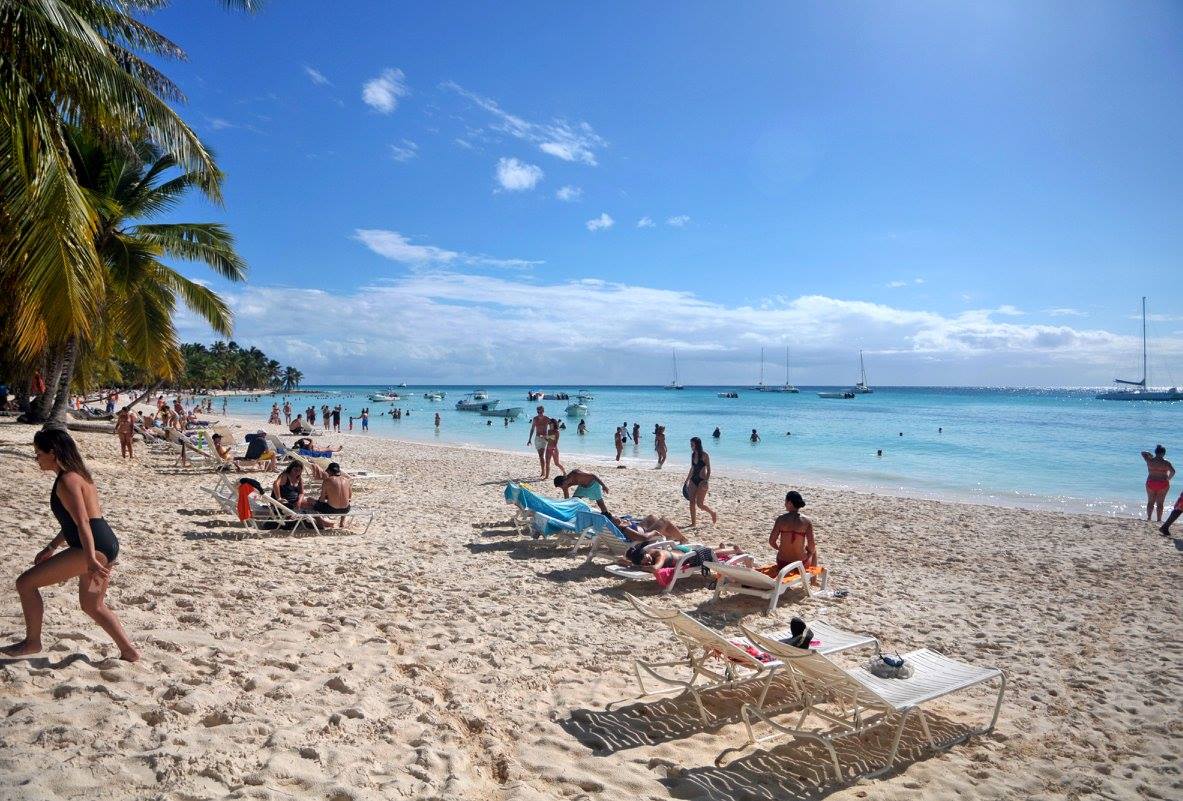 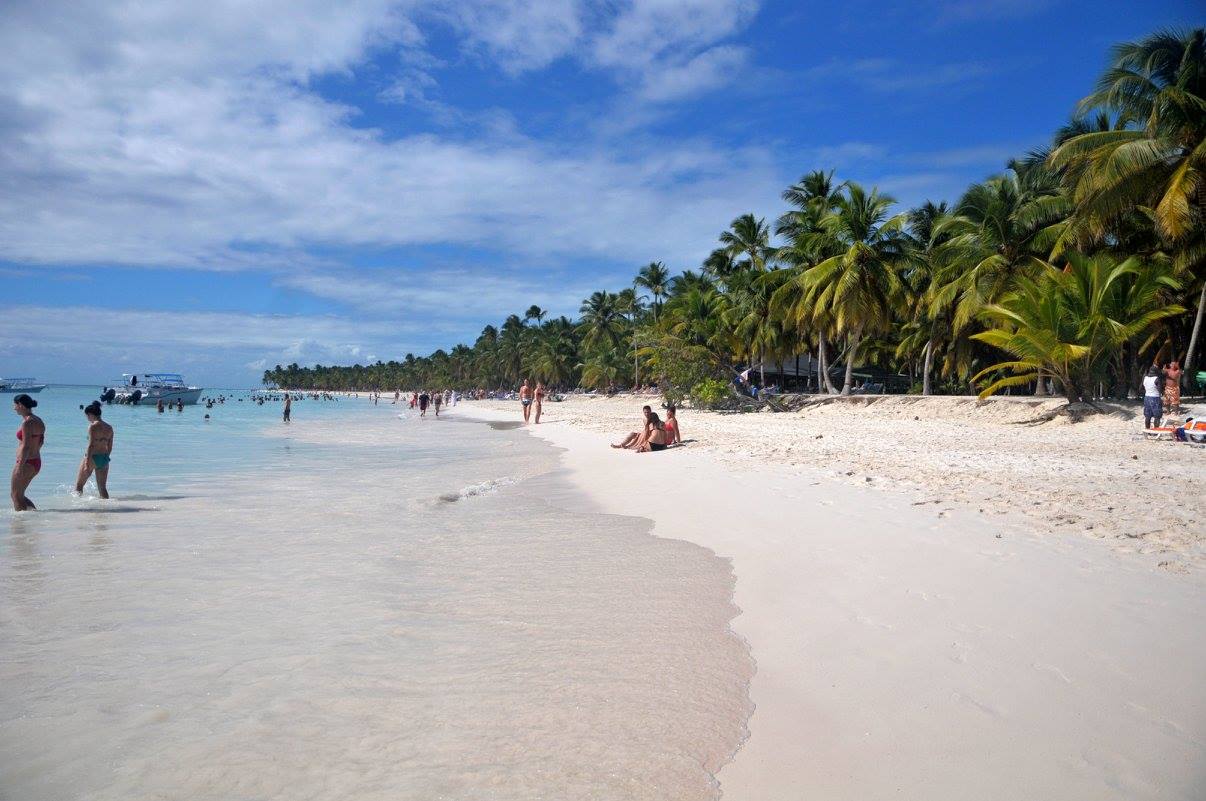 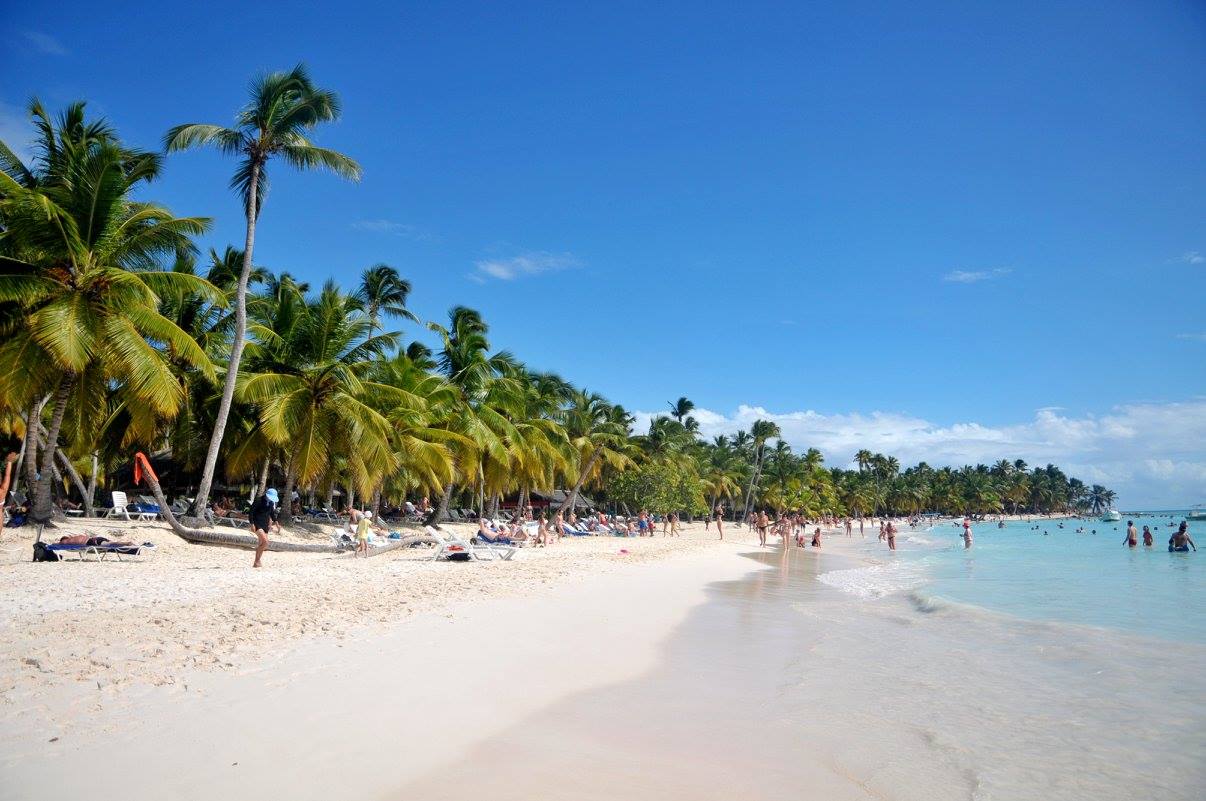 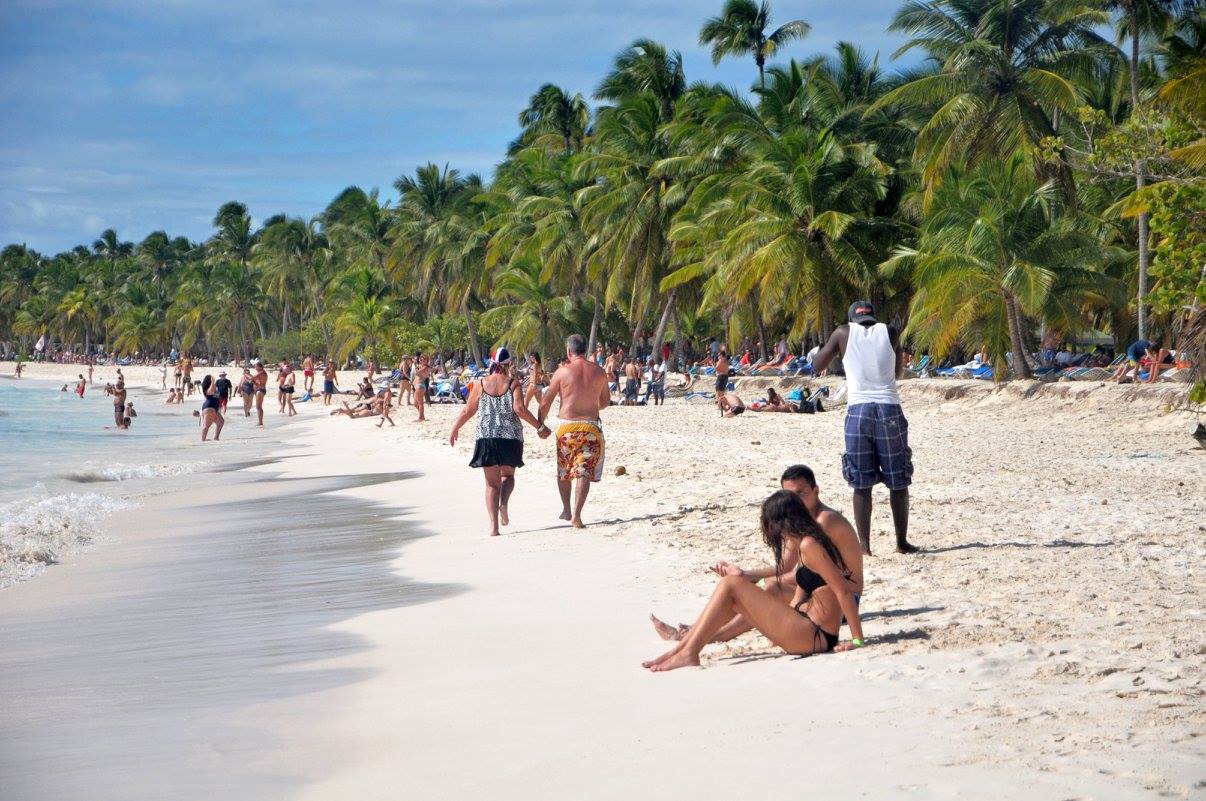