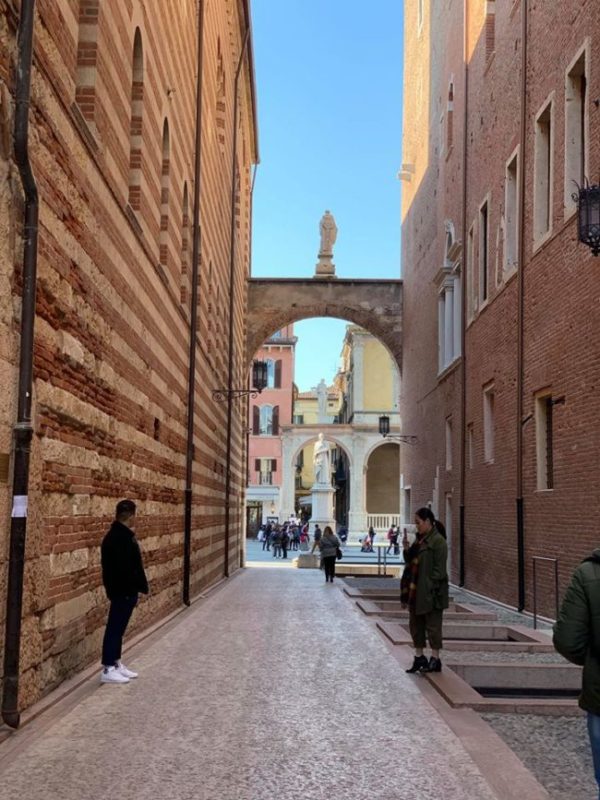 1. A time-traveler’s city, rich in architectural monuments from the past (both ancient and medieval) but still easy to explore on foot
2. The almost car-free center
3. Walking on the Ponte Pietra and the nearby riverfront promenade
4. Among the many churches, particularly the 12th century (!) San Zeno Maggiore
5. Sitting one evening in an atmospheric bar on Piazza Delle Erbe
6. The shops on Via Mazzini and Via Capello
7. The spectacular Roman arena on Piazza Bra, in the heart of the city
8. Going up to the top of Torre dei Lamberti
9. You can easily get your money’s worth out of the Verona Card
10. From a cultural tourist perspective this is a very rewarding destination

1. Too many tourists – impossible to avoid the hordes of big, noisy groups bumping into you – which rather spoils the romance of the Romeo and Juliet story
2. Ice cream is pretty expensive (though good ice cream is expensive everywhere these days)
3. In high season (May – September) it’s hard to get a hotel room anywhere at a fair price
4. During the height of summer (the second half of July and August) the heat is unbearable
5. Not much to do here in the evenings
6. The area around the train station is run down, and a bit scary too
7. Graffiti everywhere – even on the wall of Juliet’s house!
8. Some of the outlying districts of the city are fairly dilapidated
9. Worries about pickpockets

Gee! Juliet is there, but why does she speaks Russian?

“We let the city surprise us, and it did. Even apart from Romeo and Juliet, there’s plenty here to keep a visitor occupied. It’s not a big city, making it perfect for a few hours of sightseeing, but you could easily spend days exploring different parts of town.

On the edge of the old town there are plenty of multi-story parking lots, and just a stone’s throw from Lake Garda. The city itself is beautiful and full of atmosphere, though there are sometimes too many tourists.
We began our tour at the Piazza Brá, by the Verona Arena, which is an ancient Roman amphitheater transformed into a live event venue. It seems they have some pretty state-of-the-art stage technology built into it. Incidentally, outside of the Colosseum in Rome and the Capua amphitheater, Verona’s is the largest in the world.

We soon ticked off the obligatory sights, like Juliet’s balcony, which is obviously a fake me. I waited for long, long minutes, in case some Slavic girl should appear in a window or on the balcony. People bay €5 to stand in a queue for an hour, then, at last, they get to pose on the balcony, while dad takes pictures from the street below.

Half the people are looking at the balcony (and the Slavic chicks) while the other half is touching the breasts on the Juliet statue.
There are some places in Italy where it isn’t easy to put up with the people around you, so of course, this was totally fine, in the sweltering heat. (2017)

“To be honest, I wasn’t planning to visit Verona at all. I mean, who wants to caress Juliette’s breasts, leave messages of love engraved on walls for posterity, or dreamily look towards the beloved on that particular balcony? In my imagination, Verona dripped with saliva and I wanted nothing to do with it, thank you very much.

However: I was immediately impressed by the buildings with frescoes on their facades, and the balconies decorated with climbing plants. In Verona, even the simplest apartment building caught my attention so much that I would have liked to have brought home every balcony and window on my memory card – we climbed many, many stairs to reach Piazzale Castel San Pietro, from where we could see the city's skyline with it centuries of history by the light of the setting sun.”(2019)


“This was my third visit, and the third I finished with mixed feelings. Millions of tourists almost overwhelm the city, so it's hard to see the abundance of beauty. In many places, the tendency to cut corners is felt, and we did not judge public safety to be the best either. We visited Juliette’s balcony and the Arena, and walked along the riverbank.” (2022)

"This city, with its narrow streets, has become my favorite. The old town, including the robust walls of its two-thousand-year-old Arena, offers an amazing sight. It used to be able to accommodate 30,000 people. Today, for safety reasons, it can accommodate only half as many people. Next to this ancient wonder, immediately to the left, you can see the glittering, bustling quarter of the city center, studded with exclusive shops. Via Giuseppe Mazzini, the city's popular shopping street, leads us along shiny granite cobbles to Juliette’s house.

Two small squares open from here: Piazza Delle Erbe, which hosts the market, and Piazza Signori, which hosts cultural celebrations. Both are surrounded by painted, ornate buildings. The most beautiful thing is that everything seems to have been chewed up by the iron teeth of time; there is no longer a single intact piece on the railings of the balconies, they are almost completely rusted, and sometimes even the freshly plastered house walls are smoothed into a rustic look. This makes it feel so real. However, inside the apartments are very nice – even a fly would slip on the polished marble floors! Among the must-sees, Castelvecchio (Old Castle), Basilica San Zeno, Verona Cathedral, and Santa Anastasia would fit into a visit. 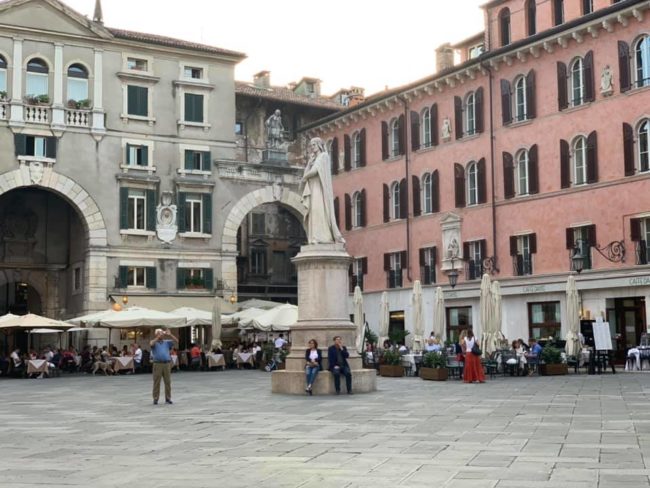 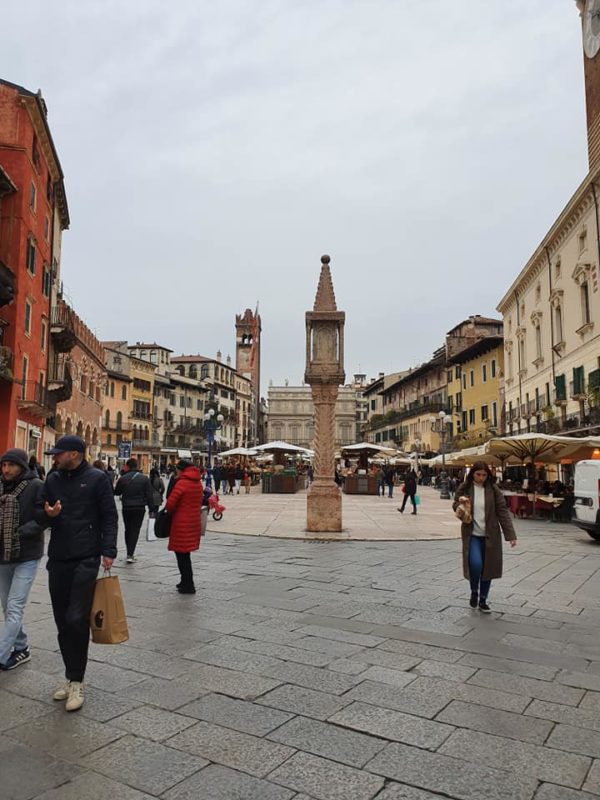 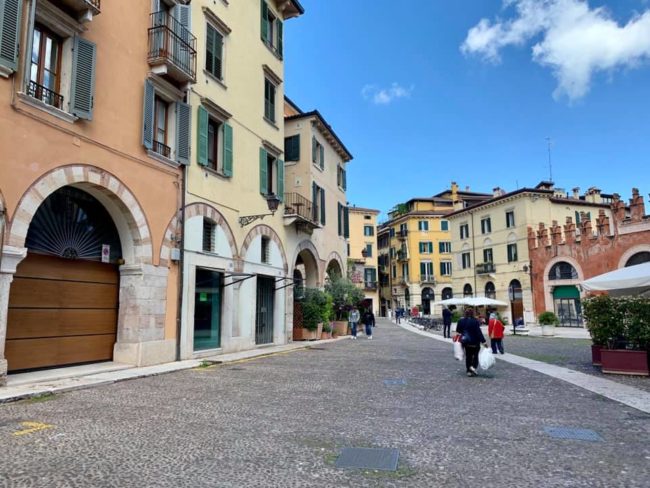 A three-course meal for 2 People is a mid-range restaurant: around  53 Euro. 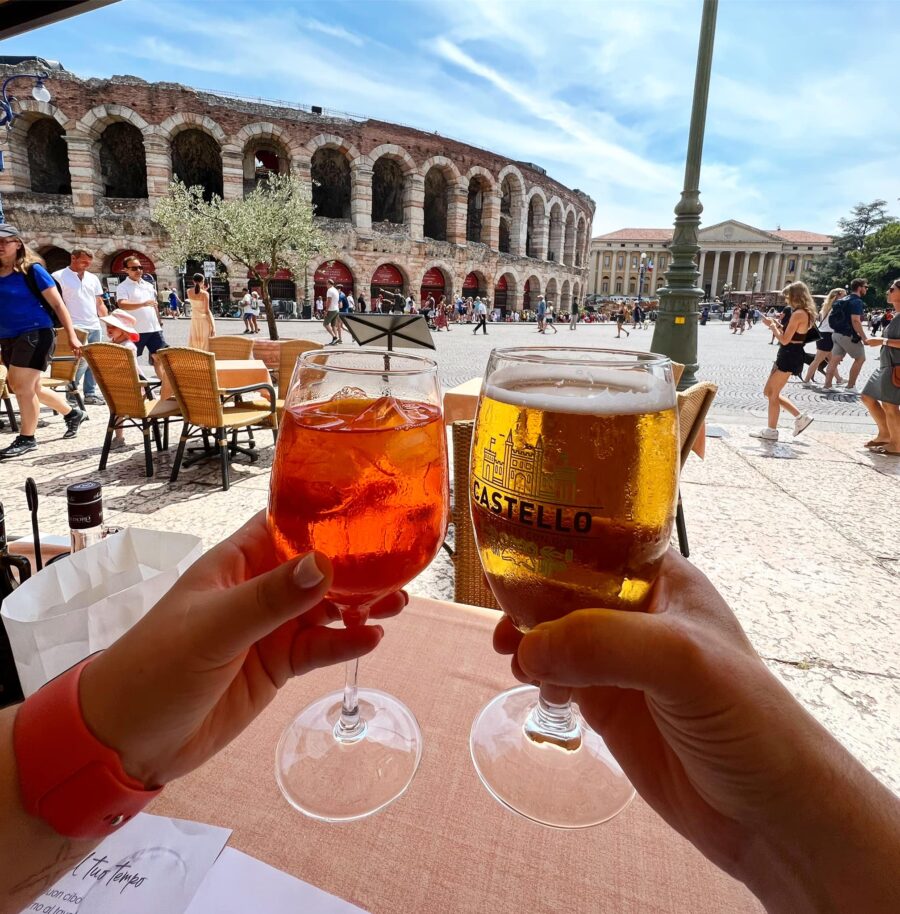 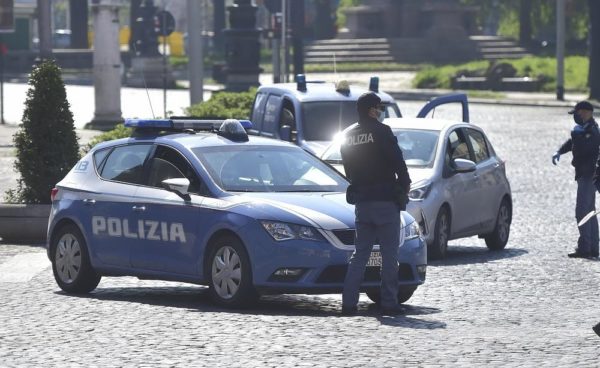 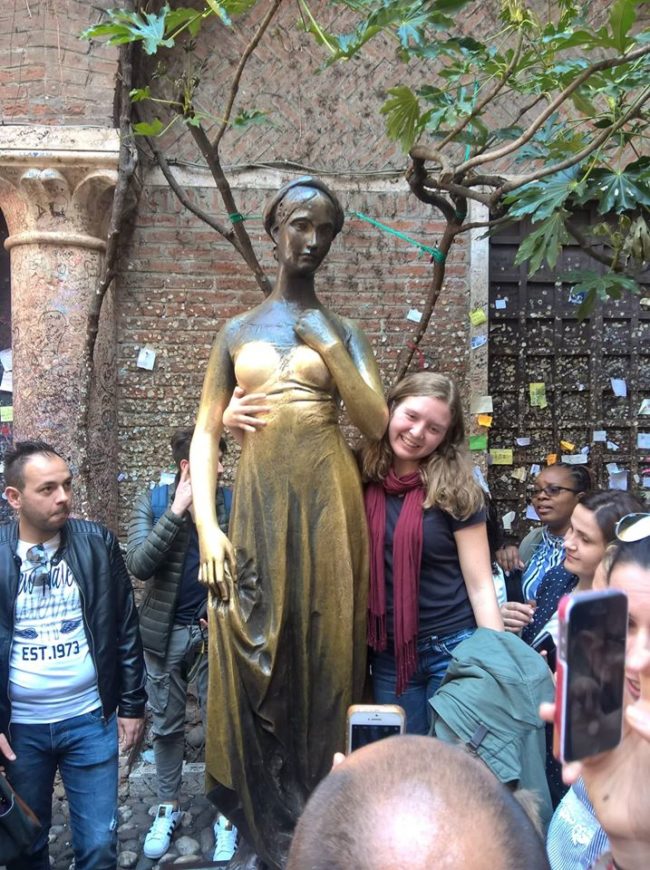 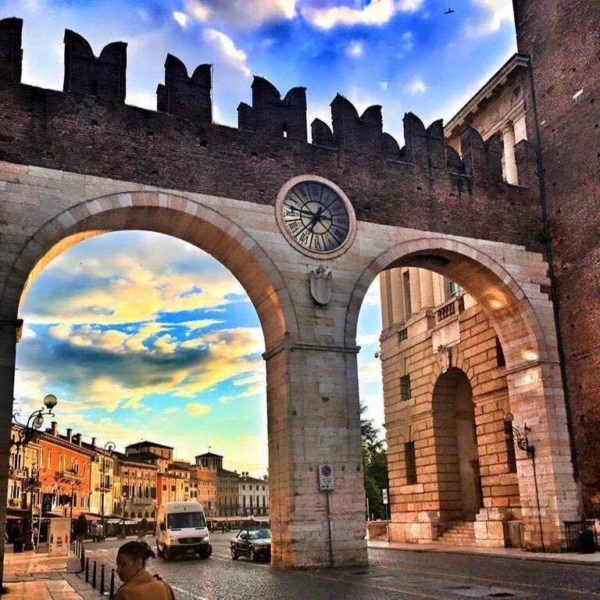 Verona is in Northern Italy, east of the Garda Lake, west of Padova and Venice.

The entire city of Verona is a UNESCO World Heritage site, eminently thanks to its famous ancient Arena, where opera festivals are held during the summer.

Verona, of course, is associated with the story of Romeo and Juliet. We know, though, that the tragic love story, along with its characters, is a fiction of Shakespeare. 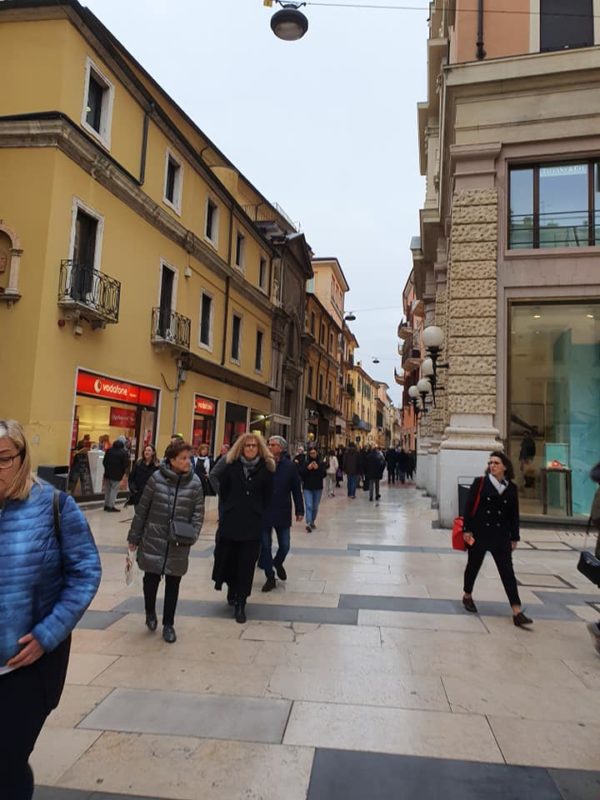 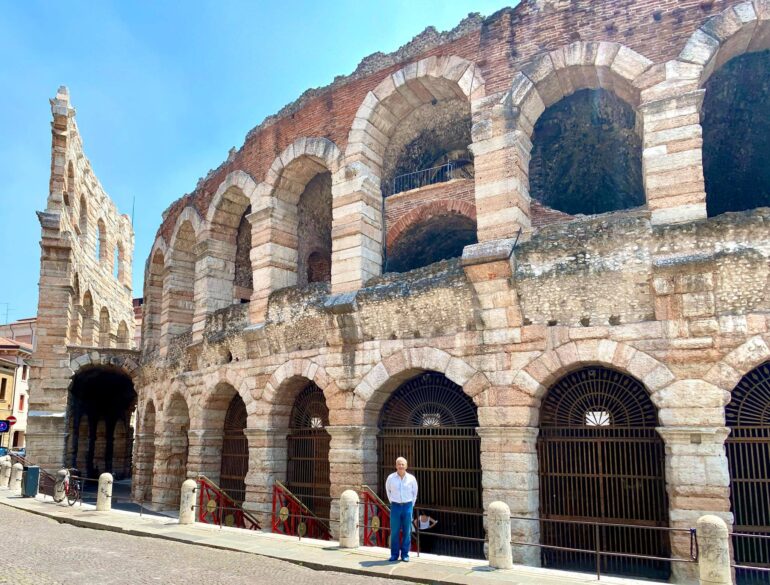 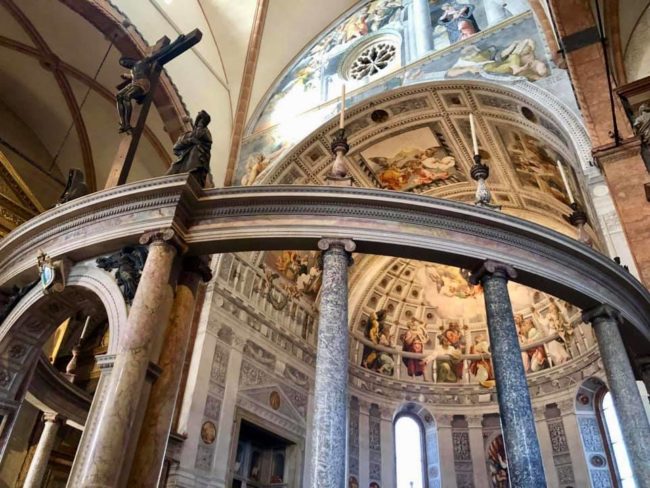 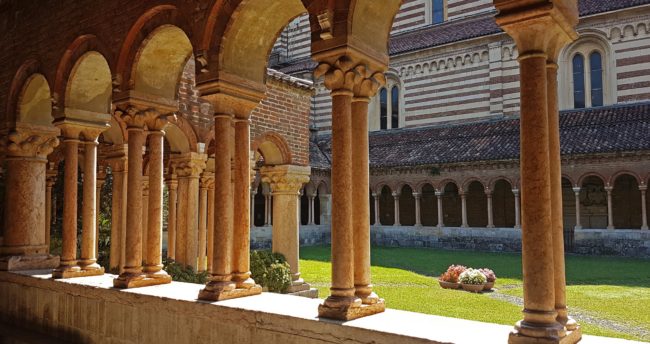 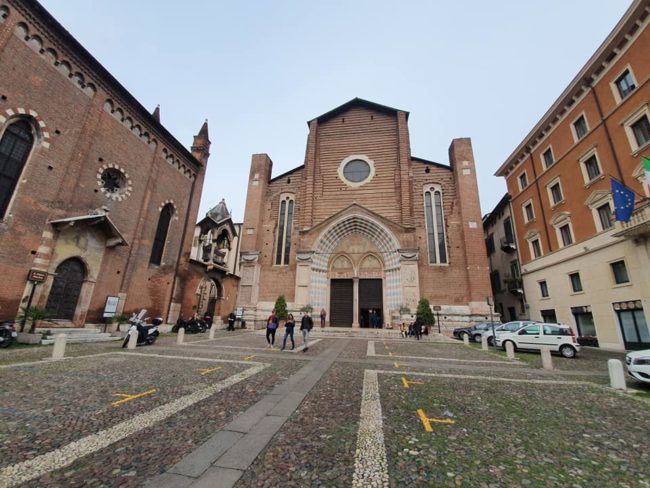 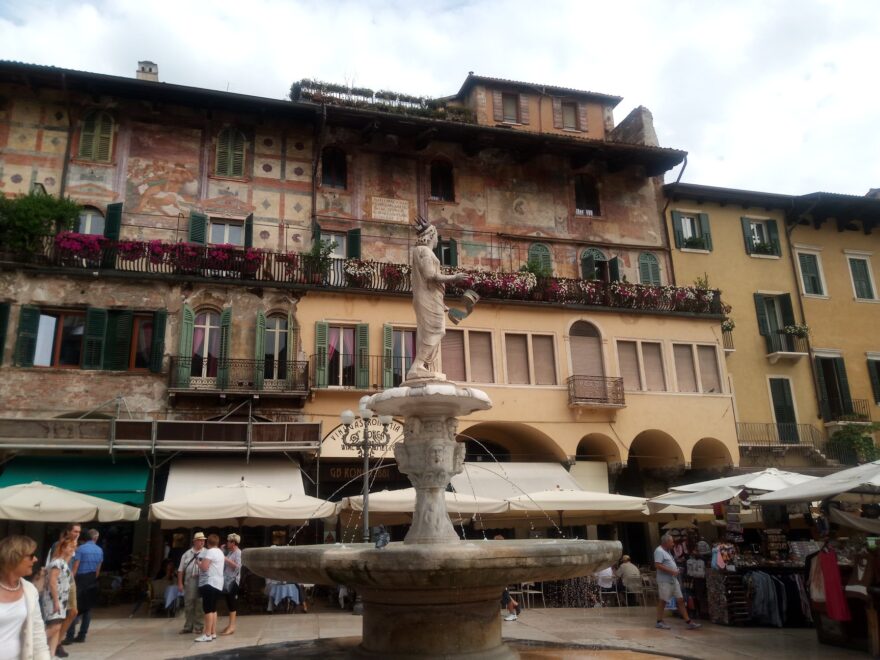 “We went to see the courtyard of a house (Juliette's house) where a non-existent person (the family existed, but not Juliet herself) spent intimate moments with another non-existent person (Romeo did not exist, only the family). Without Shakespeare, this would all amount to a big zero. In any case, we can pay to go up to the non-existent Juliette's balcony, but it’s free to visit the courtyard, where blank-faced foreigners grab the breast of a bronze statue modeled after Juliette, a symbol of pure love, and write their names and their love on the wall with an alcohol-based felt-tip pen, which is at least as hurtful and outrageous as the destruction of Oscar Wilde's tomb in Pére-Lachaise.” (2017)

“It is said that there is no evidence that Juliet really called out to Romeo on this particular balcony (in fact, you are more likely to hear the opposite, that the whole thing is simply a hoax), but this does not bother the romantically-minded young people (and older people) who come here as pilgrims. I also think it's really romantic to immerse yourself in the role of Juliette. :-)

The city would be stupid not to take advantage of it, after all, and the famous house has been nicely decorated, so you can take photos on the balcony, and of course, the trade in Juliette key chains, T-shirts, and fridge magnets is also a big business. (The best was the Juliette breast magnet because everyone grabs the breast of the statue standing in front of the building and stands in line to take pictures. It shows as it's polished to a beautiful shine.” :-)

There is no statute of poor Romeo, although I don't know if they would caress his chest... ;-) and in general, the poor guy is not featured on nearly as many gadgets as his lover. Of course, I'm not criticizing all this as the smartass who avoided the trap – we couldn't come without a Juliette breast magnet either, and we also got a laugh or two from the children, since they know the story.” (2017) 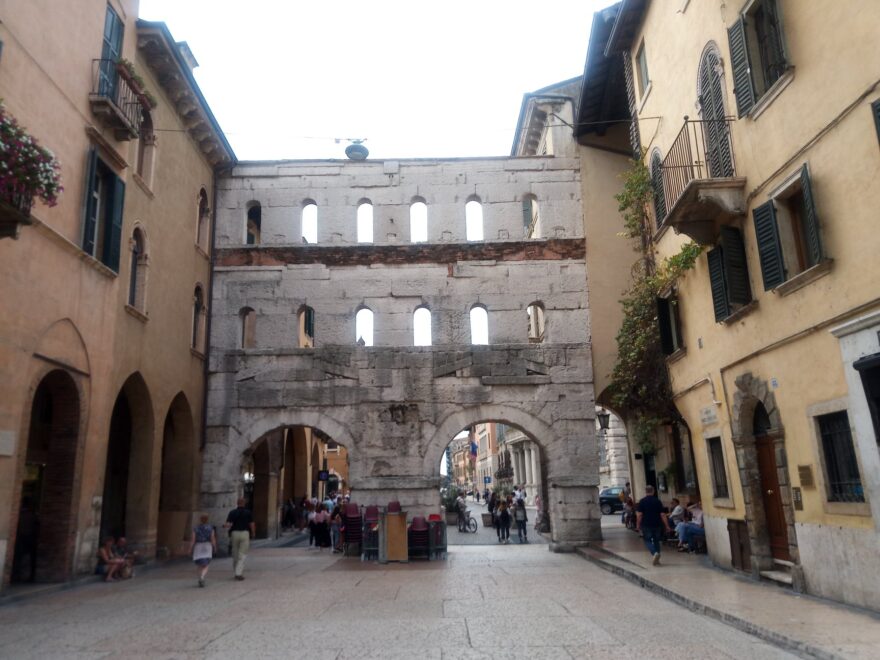