1. Piazza del Campo, of course (mostly there are more people)

We only decided to visit Siena at the last minute. Of course, we knew it was a beautiful and famous city, but I pictured it quite differently. I had read ‘The Accursed Kings’ more than once, and Siena is mentioned more than once, in connection with the rich Tolomei family. I had a picture in my mind of Siena, but ‘only reality can surpass our imagination’. Maybe this was why Siena struck me with such force: never in my life have I seen anywhere so beautiful! The Florence cathedral is a marvel, but the crenellations on the cathedral of Siena are out of this world! I saw with surprise that the Tolomei family really did have a house here (or rather a palace!) whereas I thought Maurice Druon made up the whole thing.

Siena is one of those Italian cities I’d always be happy to go back to. Medieval streets and squares, friendly locals, and a lot of young people (it’s a university city too). We walked a lot, and the city totally captivated me. The sort of place that just radiates positivity.” (2018)

“In my opinion, the main square of Siena is in the same category of all-time-great cultural achievements as, say, Beethoven’s 9th symphony. The sort of thing you could never tire of. I read somewhere that over the course of a year, there wasn’t a single instant when not a single person was standing in that scallop-shaped square. The crowds are a permanent feature, so if you’re looking for a quiet, meditative space for reflection, this may not be for you.

Siena is the alpha and omega of any trip to Tuscany, and I certainly wasn’t going to miss out. According to ancient tradition, the main square – the Piazza del Campo – and the adjacent town hall do not belong to any of the districts of Siena, but form a separate entity.

The main square is located at the intersection of the three main streets of Siena, and its atmosphere radiates harmony and tranquility. Siena’s Piazza del Campo is one of the truly great masterpieces of medieval architecture. (2016) "

“According to legend, Catherine de’ Medici, when she married the French king Henry II only wanted to bring chefs from Siena to his French homeland. And not just to keep alive the strands of attachment to her homeland. The lands around Siena have not yet been hit by the pollution of our time: a whole range of excellent olive oil, vegetables, and herbs come from here, cattle and pig farming are both in excellent shape, and the countryside is rich in wildlife. Not to mention the Chianti which ripens on these hills. The cuisine of Siena is simple but not unpretentious, and for centuries it has always been able to take advantage of all the treasures with which nature has blessed this region and its inhabitants.

An appetizer is a combination of mixed nibbles (crostini misti), sheep cheese (pecorino) together with honey, and various local salamis. The gifts of Siena’s dark soil include the vegetables that make up the ribollita. Lacinato and curly kale, beans, carrots, celery, onions, and various wild vegetables are all cooked together, served with dried bread and raw extra-virgin olive oil. It got its name (‘re-boiled) from being cooked the day before and reheating before serving. In terms of pasta, the thin ‘pici’ or ‘pappardelle’ (broad noodles), which are served with wild boar or wild rabbit ragout, should definitely be tried.

The king of the second course here, like in Florence, is bistecca (there is a fierce rivalry between the two cities in this regard), but in recent years the chops from the Cinta Senese a local variety of pig, has claimed the throne. The mention of this pig is not an insult in Siena, because it can even be seen at the town hall in the Allegory of Good Governance. And of course, different game meats can come with an infinite number of sauce variations.

As for sweets, such as the profusion of spices that in confectioners you almost feel you have wandered into the fabulous orient. Siena’s sweets are very hearty, and not simply a palette cleanser at the end of a meal. Panforte, for example, is an almond marzipan cake made with nutmeg and a citrus juice called cedro. Almonds are also the main characters in the traditional ricciarelli and cantucci at Christmas, which can be enjoyed together with a sip of Vin Santo on long winter evenings.

Nothing threatens the primacy of the Vin Santo dessert wine, while among red wines, next to (or above) Chianti stands Brunello di Montalcino, with the former being more accessible to a wider crowd. The ranking of white wines is led by Vernaccia in San Gimignano. And where is the best place to enjoy all these delicacies? By no means in Piazza del Campo, where tourists are served as on a treadmill. There are a good number of trattorias that can also offer real Siena cuisine. Examples include Fontenuova in Piazza Ovile and La Finestra in Piazza del Mercató, which offers various group promotions. For example, when celebrating a graduation, the celebrant eats and drinks for free. In the same area, there is the popular Taverna di San Giuseppe, here the specialties are tarragon, mint "green gnocchi" and a variety of grilled meats. The upper-middle price is around 35-40 euros per person, especially if you do not drink the most expensive wines.

Many praise Permalico, halfway between Campo and the Duomo, where two people can eat until they burst (three courses, plus dessert, wine, water, coffee) and still have changed from 50 euros. The Osteria del Gatto (Via di San Marco) is mainly famous for its fish dishes and offers a two-course dinner for two for 40 euros, and 30 during promotions.

The rustic Il Grattacielo (Via Pontani), which, despite its name (skyscraper), has a rather low ceiling, is visited not only for its old-fashioned looks, but also for its intimate atmosphere: it only has 20 tables, so it’s as if one were not even going to a restaurant, but to visit a family in Siena. Each dish ranges from 6 to 12 euros, which isn’t much more than what you’d pay for the ingredients in the supermarket. There are those who return to Siena and don’t even think twice about where to fill their bellies. You don't have to write about Il Grattacielo, you have to go there! And for those who can't choose from these, it’s an open market: there are another 240 restaurants, pizzerias, and other eateries in Siena.

“About the Wednesday market: unfortunately it isn’t a flea market. You can’t rummage about, or buy fantastic antique books for spare change, and they don’t sell antique Roman coins either. Please, this is Siena, where retired ladies wear fur coats, and their dogs are better dressed than poor university students. So Siena is not famous for its flea markets, there are no cheap used clothes stores, and an antique shop has only been open for a few months – and I suspect my custom won’t be enough to sustain in. So what’s left? The weekly Wednesday market.

The picture is pretty mixed: Italian uniqueness versus the Chinese-made clothes you can get in any department store. Some parts of the market even feel like you’re in Asia, though it’s a bit more consolidated, and vendors don’t come running after you, offering a better price. In fact, you can't even bargain in this Italian market. I once accidentally managed to haggle one whole euro off the price of a bag, but I think the seller gave in just because he found it so funny that someone was trying to bargain. So, the rules here are different. Despite the isolation of Siena, there are more and more Chinese stalls on the market, and with them, t-shirts, pullovers, and cardigans made to a one-size-fits-all standard, though this by no means implies that the prices have been tailored to a more frugal wallet. There are exquisite quilts, curtains, rugs, leather jackets (and other leather items), hats, wicker baskets, and unique home furnishings. An expensive shopping street disguised as a market, in other words. In Siena, even the market is snobbish.

Don’t get me wrong, you can come across some very good little things, but don’t expect reasonable prices. The shoe section has a rather astonishing range on offer, but there are also casual clothes, clothes with buttons, clothes with brooches, fiddly little gadgets, home appliances (!!!) modern kitchen things you will never need, and don’t forget the best bit: the gastro section. Biscuits, sweets, olive preserves, homemade sauces, seafood, cooked and raw sausages, salamis, bacon, and cheese in all types and quantities. So if you’re visiting the Wednesday market, go with an empty stomach and plenty of pocket money, then get yourself a portion of fried scampi and head to the medieval fortress next to the market, which now serves as a park and open-air cinema in the summer. There, sit down on a nice bench and get yourself smeared from head to foot in oil as you break apart and consume these delicious fried prawns.” 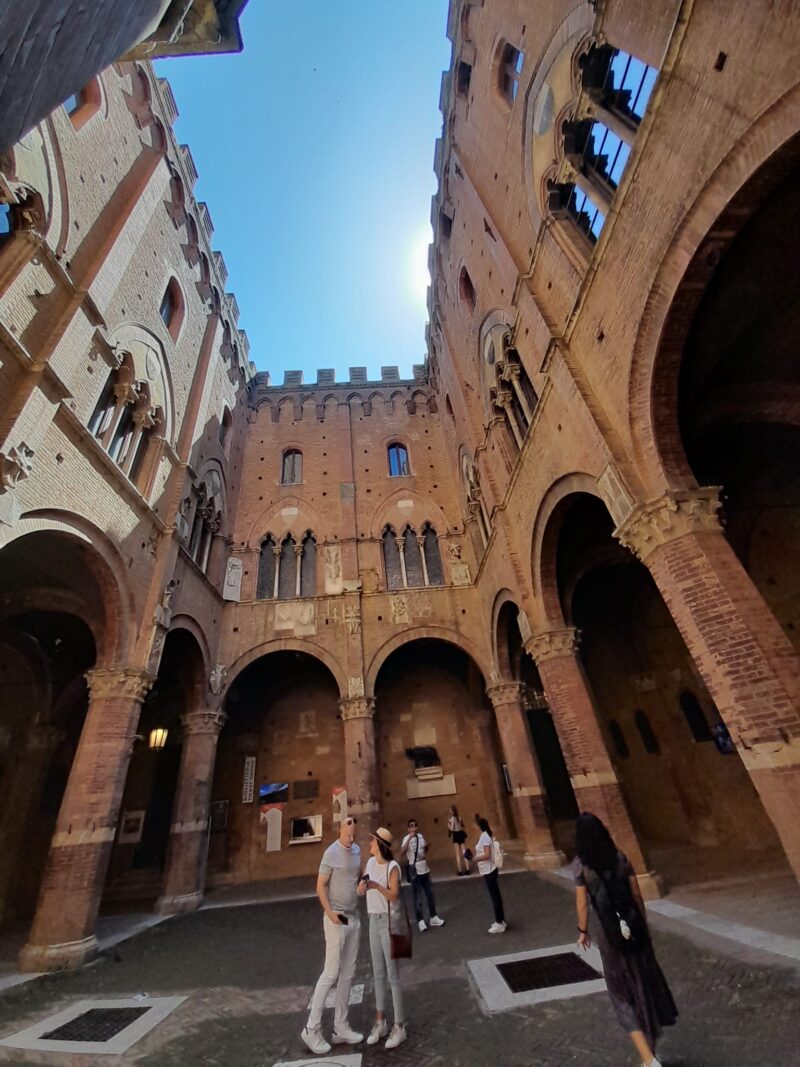 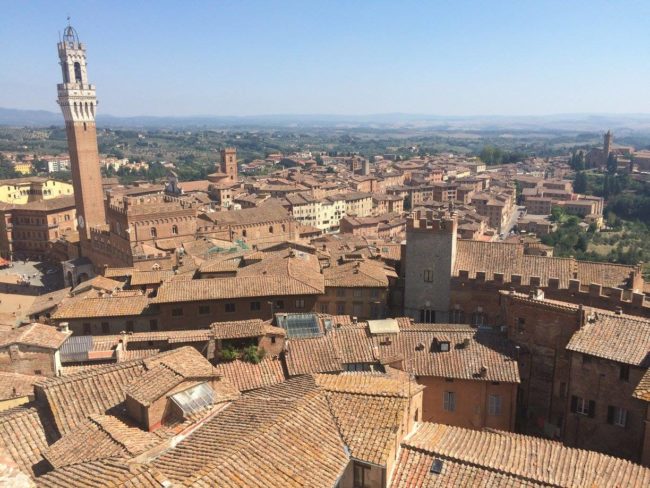 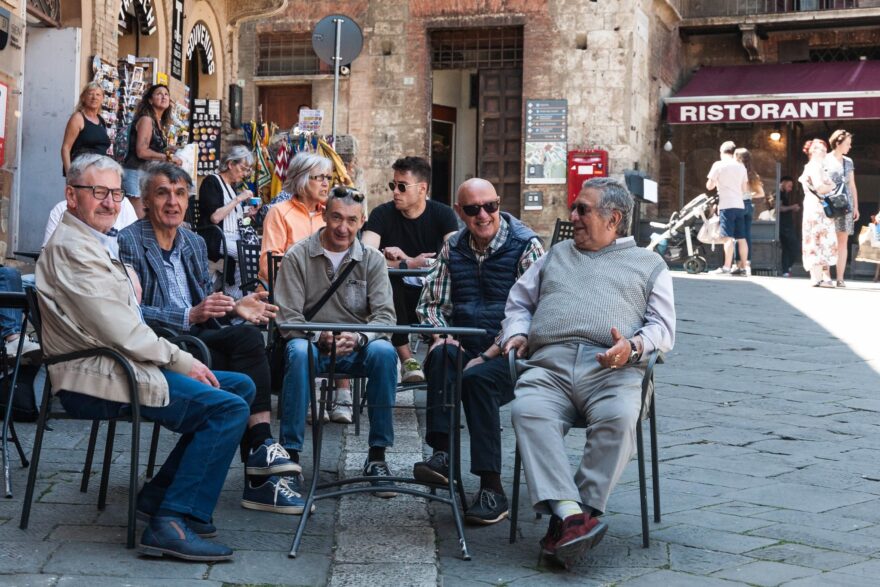 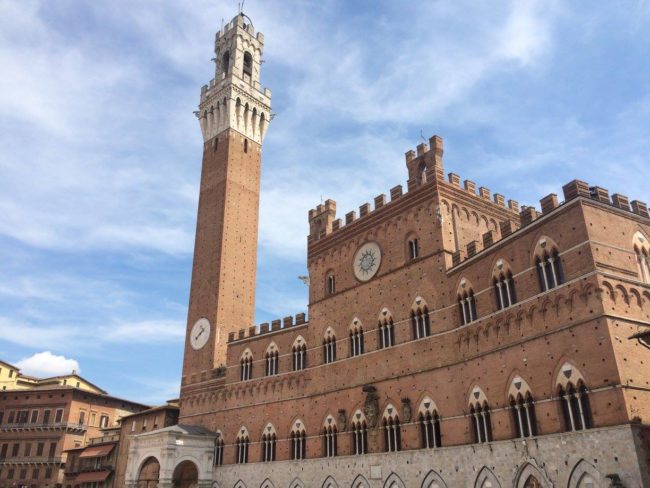 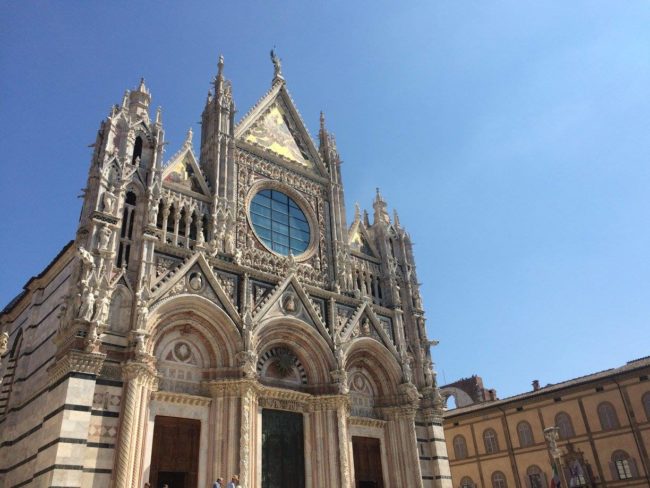 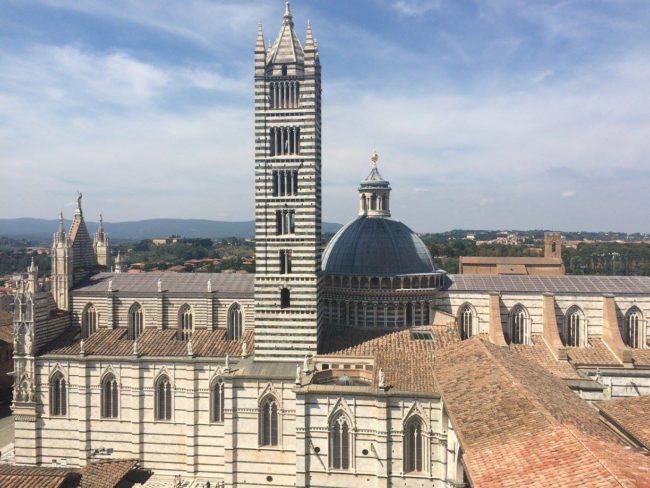