4. The elegance and radiant beauty of the Costa Smeralda (Emerald Coast) on the northeast corner of the island

5. The peculiar, distinctive character of the rural people

6. The thrilling hypotheses about the nuraghes, these ancient megalithic edifices

7. The relative calm of Villasimius

8. How transparent, crystal clear is the seawater at Chia beach or La Pelosa beach near the town of Stintino

9. Alghero and the smaller Bosa as well as Castelsardo, a cute medieval village

1. The excessive crowd of vacationers in August

7. The snobbism, the flaunt on the Costa Smeralda

8. It is very difficult to explore the island without renting a car

The beach was fantastic, with fine sand and clean water at about 27 degrees Celsius. The sights themselves weren’t so impressive, but I’d go back to that beach again any time. There was a beach on the west coast which we drove down to, and all the way there we didn’t see a soul coming the other way (or going in our direction). There were plenty of people at the beach when we got there, but it had a great atmosphere and some big waves. Half a day is plenty for Cagliari – it’s nice, but nothing special. Olbia is a pretty depressing city, and I didn’t like it much. I didn’t find the classical sights there as impressive as in other parts of Italy. The advantage of Sardinia is that the beaches there are the most beautiful of all the Mediterranean holiday destinations I know, and are not so crowded, since it’s harder to get there. The disadvantage is that the island is relatively large, and you can’t really explore it all in one tour. And of course, there are mass tourism locations here, as in all resort destinations. Another advantage is that we met almost none of our compatriots...

At the very end of August and the first week of September the sun shone almost every day, the sea was 26-27 degrees, and it was possible to stay at the beach for a long time. It was a bit cloudier one day, with some rain, but then we were just hiking inland, so it was a big deal. Sardinia is expensive, even by Italian standards. In restaurants, the main course started at 25-30 EUR, while water, pasta, vegetables, and fruits are also more expensive in supermarkets. It is worth renting an apartment and taking advantage of the barbecue facilities, as the fish, seafood, and meat are also very delicious. The meat there is said to be so good that it needs only salt, no other spices. Sardinian wines are also very delicious, and not so expensive if bought locally (around 10 EUR / bottle).

Fortunately, we did not have any unpleasant experiences. We also walked into the city in the evenings, but we didn’t go down the beach in the dark – we stayed on lighted streets. We tried to avoid the main tourist traps, although we did fall into one: a boat trip to the most beautiful beaches on the east coast: Cala Luna and others. Even early in the day, there were thousands of tourists – it was worse than Rimini in August.

If you don’t want to walk everywhere, you’re going to need a car. We drove down to Livorno, and from there to Olbia and around the island, but we needed the car. A smaller car is more practical on the island because the roads are narrow and winding, with a lot of hairpins, and Italians don’t like to keep right. On the ferry, you have to park very close to the next car, and everyone applies the parking brake because the stormy sea is sure to throw the big boat around and with it all the cars in its belly. The car alarm should be switched off because the waves can cause the alarm to go off during the night. We didn’t hire a cabin, we just had a yoga mat and a sleeping bag, and we lay down on the floor near the bar like many other passengers. It’s a good idea to get to the ferry on time so you can park in the belly of the ship sooner and go up to look for some comfortable, secluded nook. :-) Best activities? Swim, swim, and swim.” (2017)

• The unbelievably delicious fresh fruit, especially peaches and apricots, are worth buying if you like them
• Bread is weird, but I suppose it’s no different from what you’re used to in all other Mediterranean countries. Sardinian flat white bread, alongside some other varieties, but basically all white bread. When you buy it it’s like a divinely fresh crispy ciabatta, but the next day it can be nailed to the wall, and by the third day it could kill someone if it fell on their head :-) If you keep it wrapped in a plastic bag it will still be edible the next day, though a bit rubbery. It’s also expensive, and not available in the evening. During the day you can find it in packages in all supermarkets, and also fresh from the counter at butcher’s shops and bakeries.
• Take enough sunscreen and other cosmetics because prices there are sky-high. We also ran out of sunscreen and body lotion for the last two days, but we preferred to squeeze out the last drops than to buy a new one. We didn't even look in smaller shops, but in Auchan, a Nivea sunscreen would have cost 16 euro (you can get the same in Germany for 4 euro) and a mini bottle (half of what I use) of Garnier body lotion would have been 8 euro, while at home (in Germany) it would have been 3 euro.
• At about 80% of the beaches have to pay for parking. The cheapest was 60 cents an hour, then 1.20, and the most expensive was 12 euro for a day!
• On the beaches, sunbeds are terribly expensive: between 16-24 euro for two beds and an umbrella. The locals bring everything with them, from a folding deck chair to an umbrella, a cooler bag, and even a camping table. :-)
• There are no public toilets anywhere. When turning onto a highway, there’s often no acceleration/deceleration lane, but just a 10-meter stretch in which you have to accelerate as much as you can and try to join traffic going at 120km/h. At stopping places male motorists stand and pee against the guard rail without any self-consciousness. There are no toilets at all at the beaches. Where there is a beach bar, there is a locked chemical toilet, but only the waitress can use it. So everyone goes to the bushes, meaning that the paths from the parking lots to the beach are essentially open toilets, and stink. It’s the worst for a woman, if she’s menstruating, and has to get changed in a bush.
• Police: they’re everywhere. We only saw them with a speed gun once, but they got the car in front of us instead (that was our luck). They are constantly driving around the parking lots, immediately ticketing anyone who has not paid a parking fee or whose ticket has expired.
• Cigarettes can only be bought at the ‘tabacchi’, i.e. the tobacco shops. These are not open in the evening, and at most, there may be vending machines in front of them – but be warned! A local (Italian) health insurance card must be inserted in the vending machine before it will dispense cigarettes. My partner found this out from a local after the machine had already eaten 5 euros. But the local helped him, and the vending machine issued an invoice to redeem the cigarettes in the store the next day.
• Refueling. Not always easy. There are no attendants at gas stations on Sundays, and you have to pay at an automatic machine instead. Most places don’t allow you to pump your own gas, but they charge ten cents more if it’s pumped by an attendant!
• Public safety: Good! We also felt safe on the beaches, and we weren’t concerned about theft anywhere. There are plenty of cops, and we even saw bicycle cops coming out and checking the beach, fining those who had climbed into the protected, fenced-off sand dunes. Should I note where people go to pee if there is no public toilet anywhere? (2016)

“The northern part of the island, the Costa Smeralda and its surroundings, where larger hotels and elegant restaurants are more typical, would be best for those who like package holidays. Anyone who would rather discover the more authentic world of the island will find something more to their liking on either the east or west coasts. The east coast of Ogliastra is famous for its thousands of bays, many of which can only be reached on foot or by boat. If you are really curious about authentic Sardinia, visit the people who still live in the mountains and preserve their traditions in their work, gastronomy, culture, music, and everyday lives. This is possible in connection with organized excursions, during which you can enjoy a real gastronomic experience. Walking through their mountain villages, you can also learn about Sardinia's historical past.” (Sophie, 2016)

"Navigating the road system is difficult, there are many roads running in parallel and you don't know which one you're on. It is also often unclear what ‘class’ of the road you are on (there is no official motorway in Sardinia), but of course, that doesn't matter to the Italians, who go everywhere at 130km/h.

It is worth renting a car, because the railway network is short, and although you can reach all towns by bus, they only run twice a day! The natural sights are inaccessible by public transport. There is a good bus service in the bigger cities, but there it’s more practical just to walk.

When renting a car, pay attention to which company you choose, and try to keep to the speed limits, because the police will fine tourists sooner than locals ... (the police stand at 20 km/h signs!) And as soon as they see a rented car, of course, they will show interest, even if it means interrupting their siesta, and regardless of whether they can actually communicate with the tourist…” (2017) 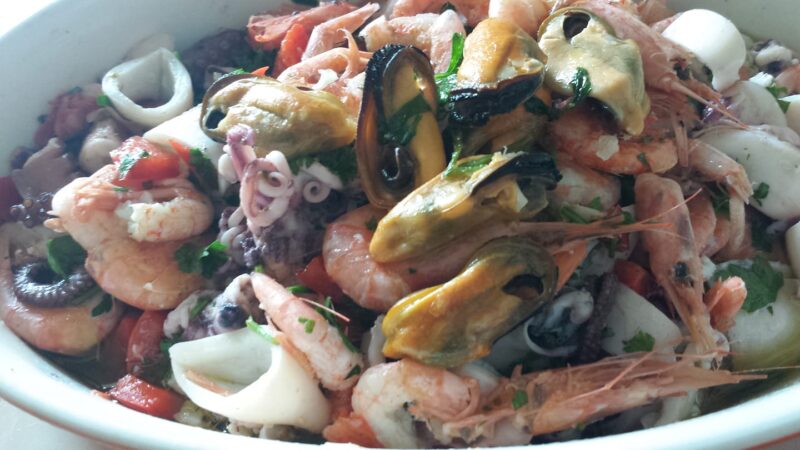 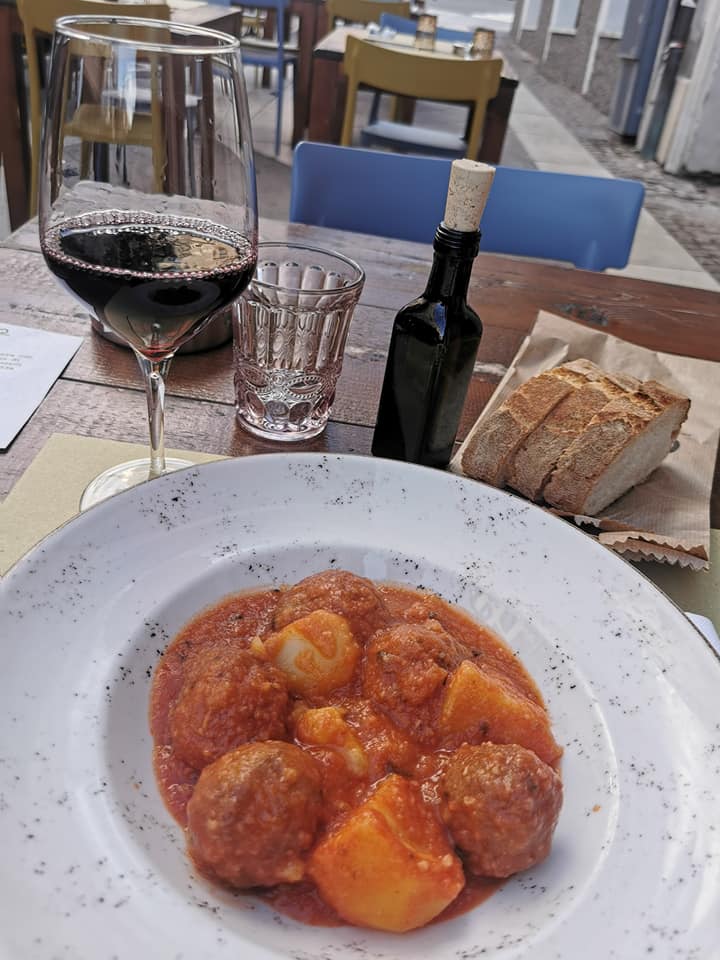 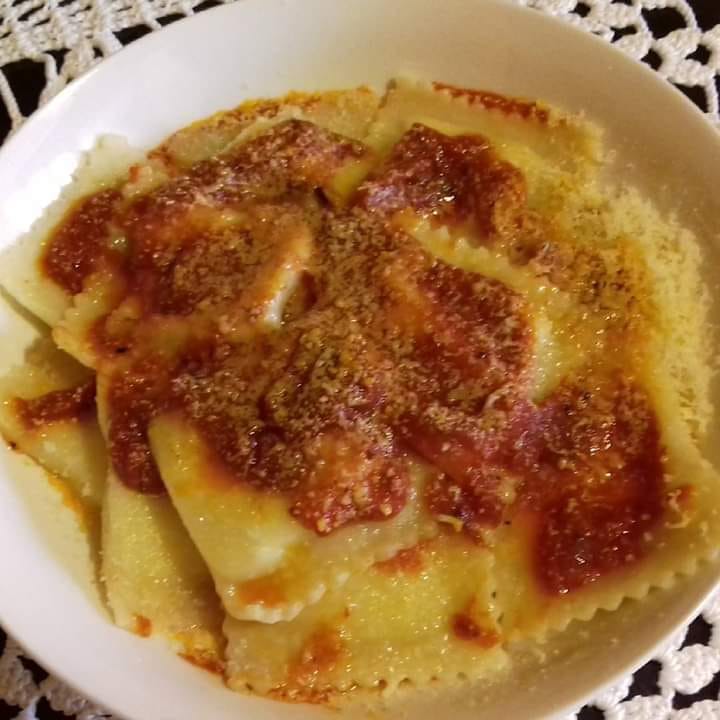 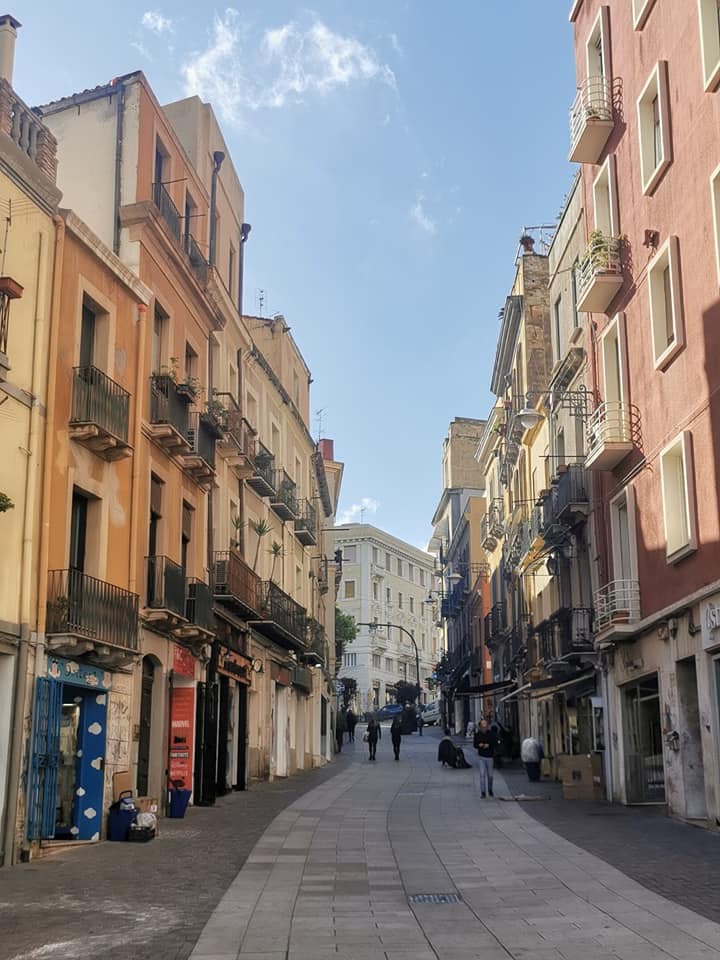 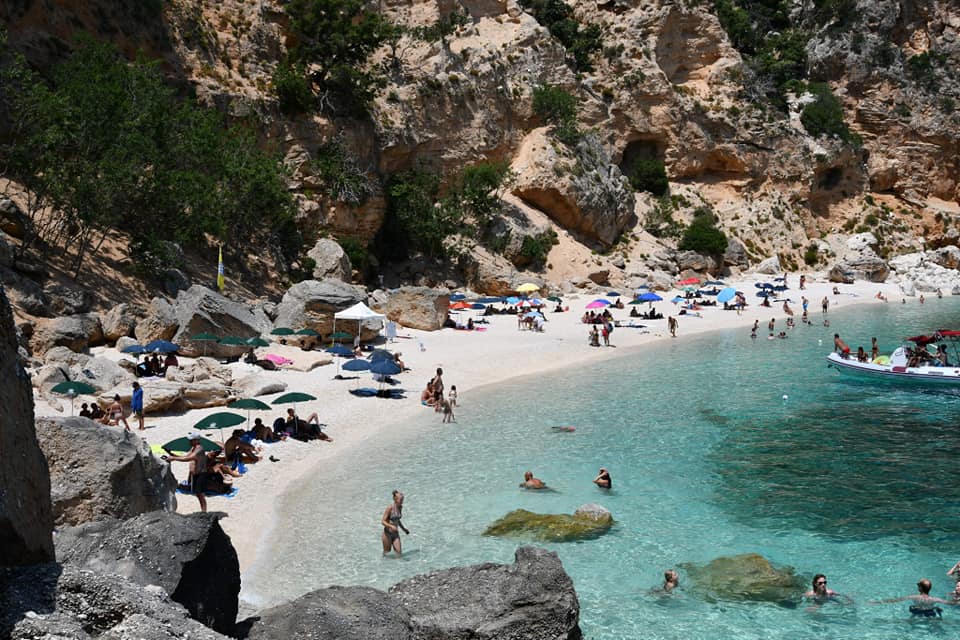 Sardinia (in Italian: Sardegna)  is an Italian island, 187 km (116 mi), from the western coast of the Italian mainland.

Sardinia has the most beautiful and cleanest beaches in Italy. The color of the seawater is wonderful. The average seawater temperature is only a bit above 20 C from mid-June to mid-October. Only in August is the seawater really warm. Few vacationers spend much time in the water before June and after October.

The Sardinians call mainland Italy the continente and refer to the Italians from there as. continental. When a Sardinian travels to the mainland, he often says he is going to Italy. Interestingly, the Sardinians, though islanders, do not consider fish an important part of their diet. This is also related to the fact that the Sardinians did not become a sailing people, but rather retreated into the interior of the island for fear of the dangers of the high seas. They even have a curious saying: nothing good comes from the sea. The operations of ferries, diving, and fishing boats are also organized and operated by mainland Italians, mainly Neapolitans. It is also interesting that despite their being islanders, a surprising number of Sardinians (especially older ones) cannot swim. Local young people also mostly just go paddling in the sea, and don't try to go deep. Many can only manage the doggy paddle. Schools do not make swimming lessons compulsory. Nor, even on the island, are Sardinians a cohesive, united people. For example, the inhabitants of the city of Sassari in the northern part of the island look down on and ridicule the inhabitants of Cagliari, who are considered to speak with an African (Moorish) dialect. 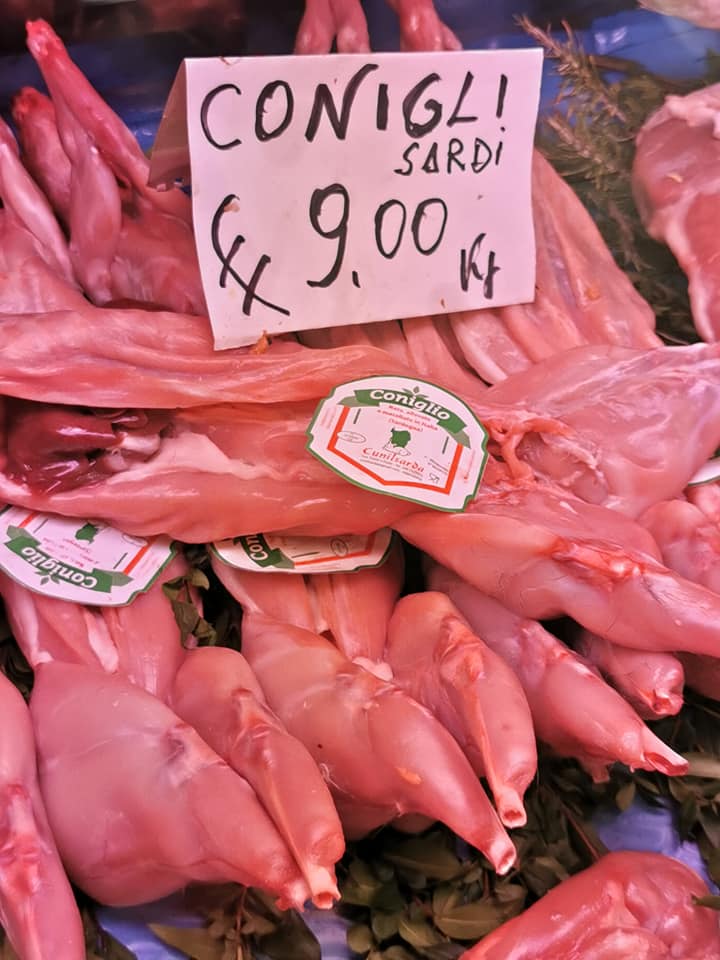 Sardinia - Cagliari - Pizzetta Cagliaritana - this is the most simple and most typical Cagliari pastry for coffee. It is salty with tomato sauce - Ata photo 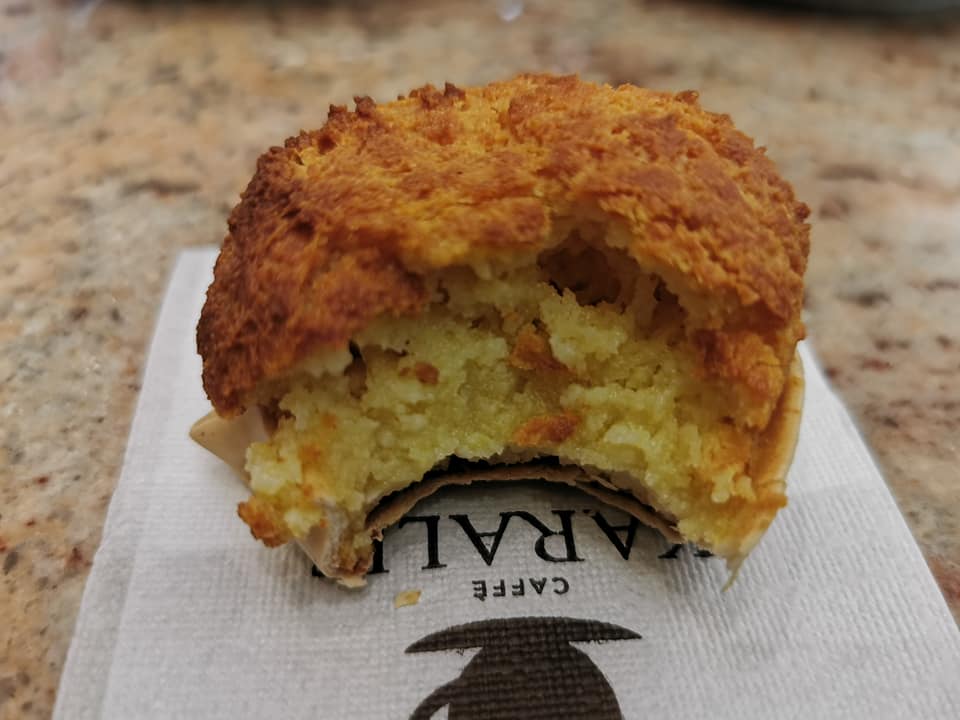 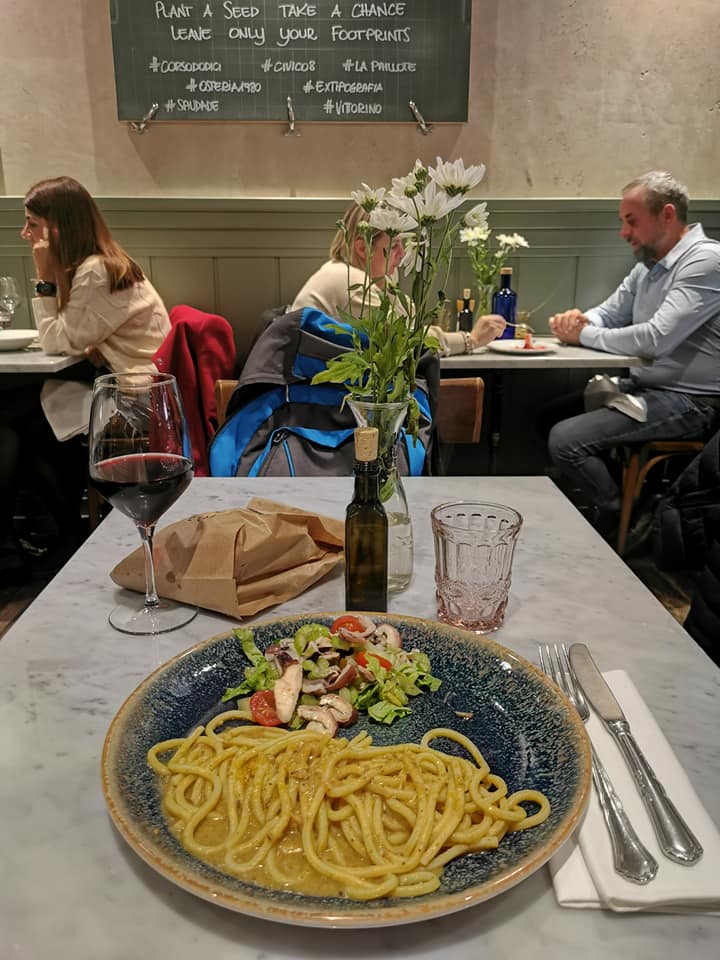 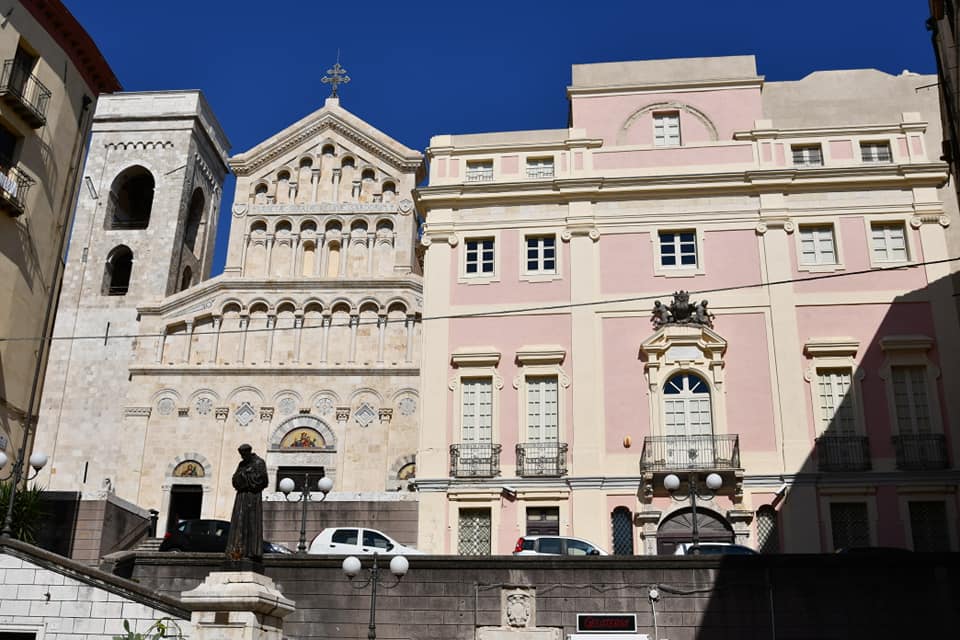 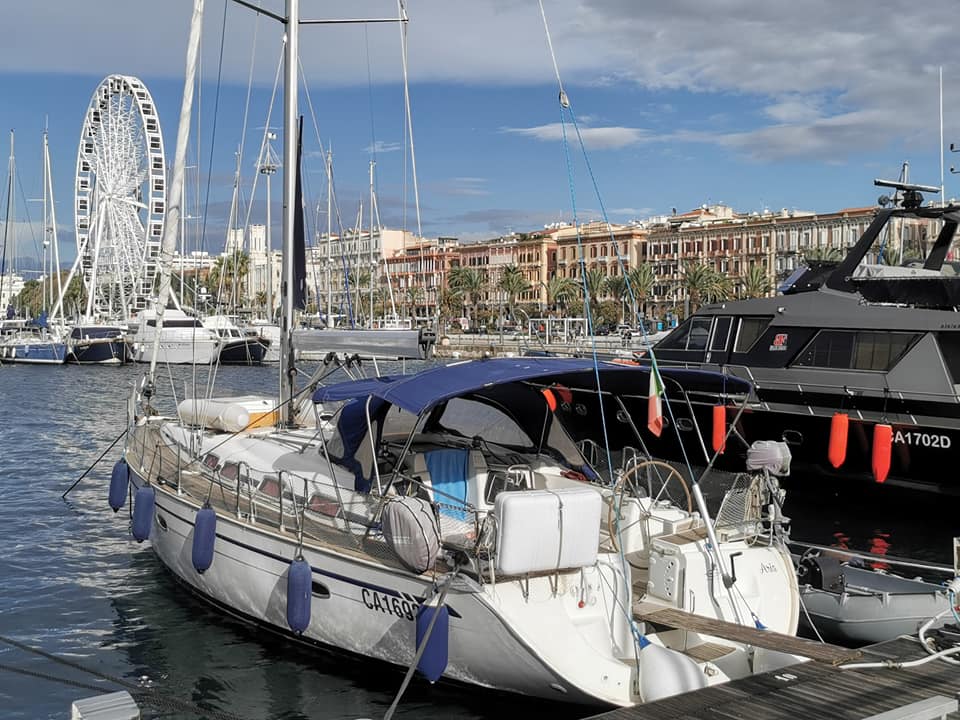 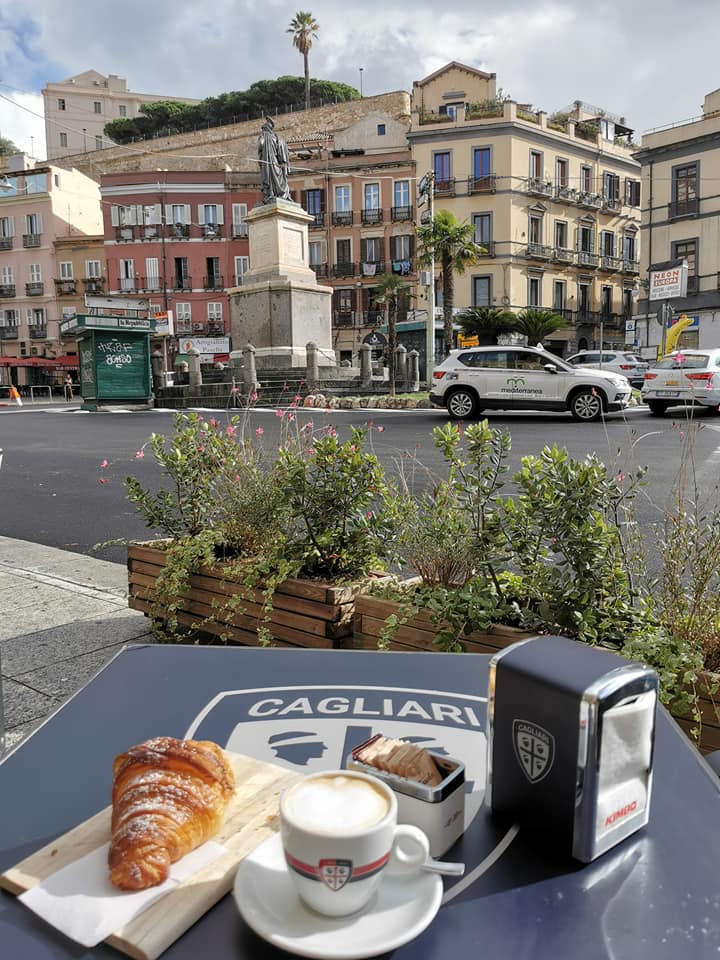 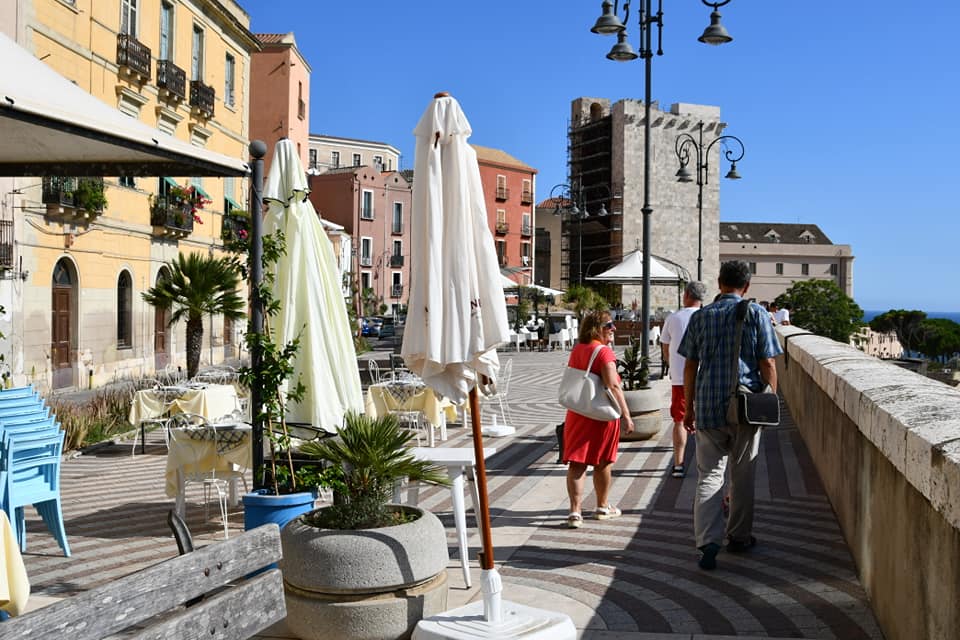 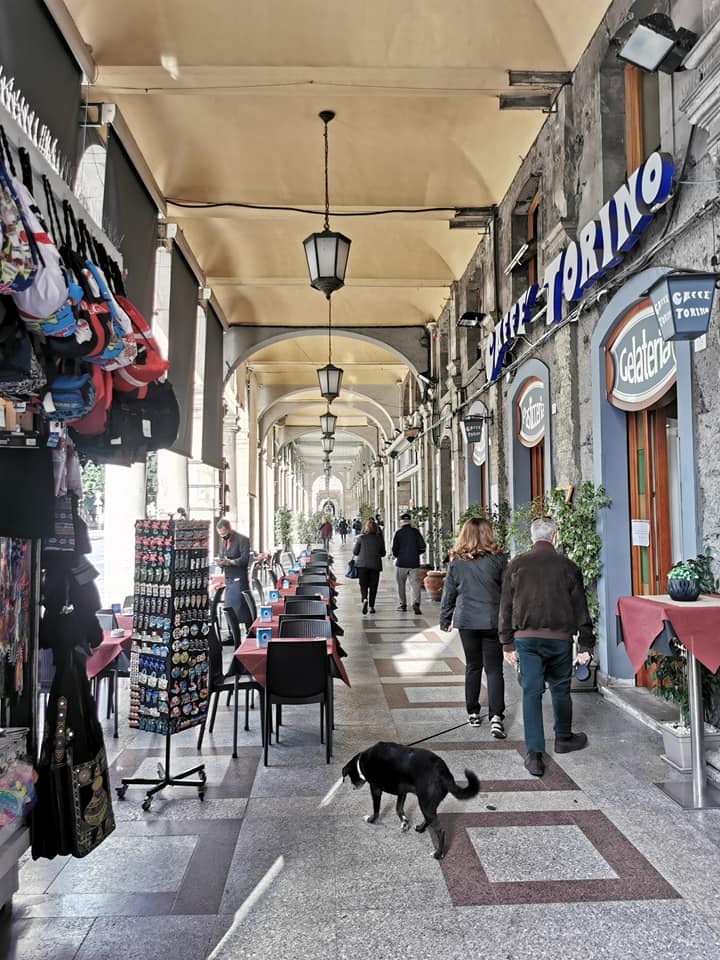 Sardinia - Cagliari - the arcade of Via Roma - Ata photo 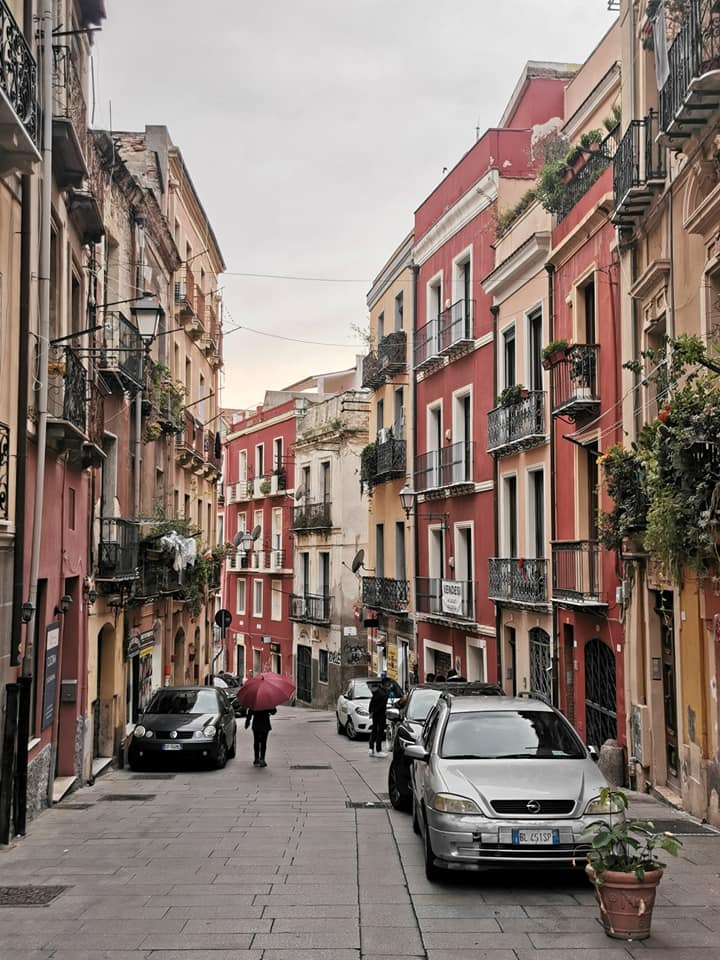 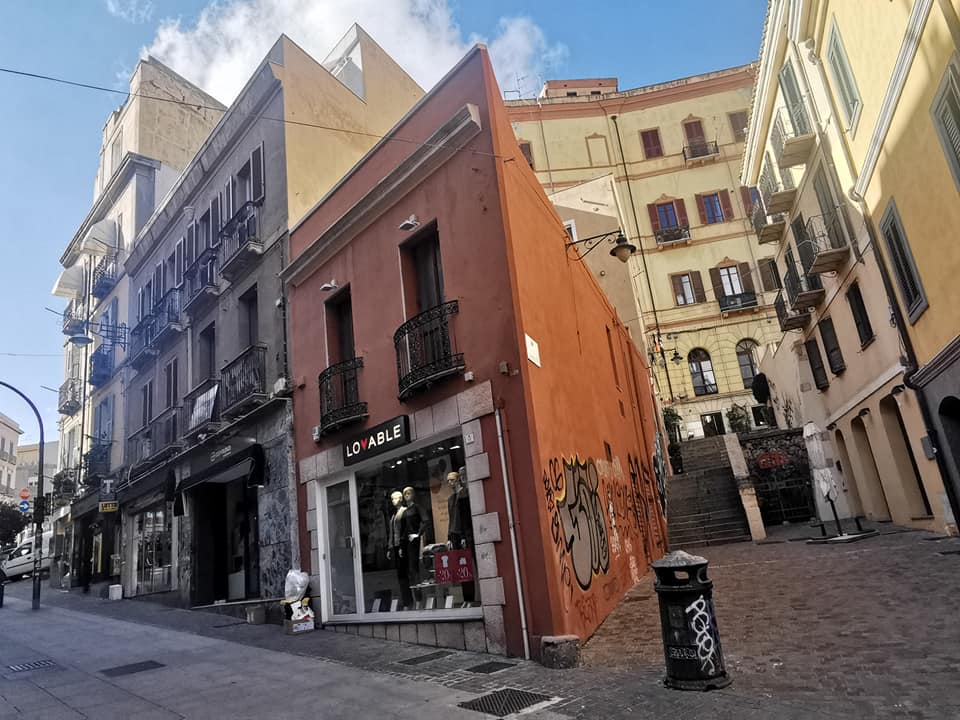 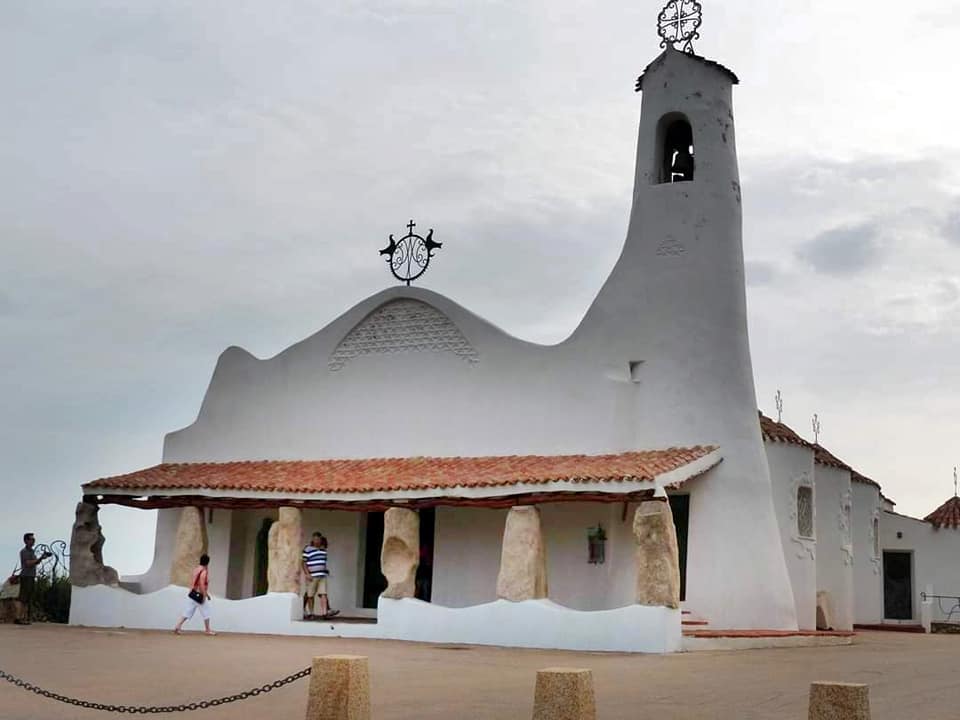