1. We did not follow those city visitors who unfairly downgrade the Duomo (Cathedral of Santa Maria Assunta) only because the Leaning Tower is supposed to be the star attraction. (After all, this deviant tower is just the bell-tower of the adjacent Duomo.)

2. In the Baptistry of St. John, I found it interesting to see the combination of the Gothic and Romanesque architectural styles.

3. In the evening, we returned to the Campo dei Miracoli, and without the daytime crowd, we've got a bit of time travel feeling back in the 12th century.  We were right to overnight in Pisa.

4. Luckily the Leaning Tower was not disfigured by building an elevator.

5. Inside the Leaning Tower, it was less uneasy climbing up the narrow stairs as we anticipated.

6. I happily skipped making the banal tourist photo (standing with your hands up pretending to use all of your strength to stop the Leaning Tower from falling).

1. The Campo dei Miracoli, the square where the Leaning Tower is, gets a terrible crowd in August.

2. Since my childhood, I was interested in the brilliant Galileo Galilei's story; still, visiting his birth house in Pisa was disappointing.

3. We made an unfortunate choice with a touristy restaurant - leave the tourist area at lunchtime

4. The Museum of San Matteo is an excellent medieval art museum, but we were a bit fed up to see so many paintings - side by side - depicting Christ on the Cross.

5. The Leaning Tower was not as tall as I have imagined.

“Apart from the cathedral square and the surrounding area, Pisa isn’t a very unique city, and the contrast between the genuinely breathtaking Square of Miracles (Piazza dei Miracoli) and the rest of the city is too great. We liked the Leaning Tower – it was both taller and more ‘lean’ than we expected: a pleasant surprise. I liked the Romanesque baptistry too – it’s beautiful and unique, both inside and out.

The stalls on the square sell too many kitsches, unimaginative souvenirs, but the square itself is in good condition.

Many tourists only come here on day trips, so it gets surprisingly quiet in the evening, but at the same time that also makes it a little dull. The African street vendors with their counterfeit designer bags don’t seem to have really taken to Pisa.

It was great to go back to the illuminated square in the evening, and admire it in relative peace and quiet. By day we liked Lucca much more than Pisa, and apart from that spectacular square, Pisa is characterless and nondescript. The only other thing worth mentioning is the Piazza dei Cavaliera, with its palazzi. On the other hand, there’s good food and good shopping. A one-day destination, then, but it’s definitely worth that. It may also be a good base for a touring holiday, as there are lots of interesting, attractive destinations nearby.” (Charlie, 2016)

“You can have a good laugh at the tourists, 90 percent of whom pose with the tower, holding it up – it’s not everywhere you can see several hundred people making idiots of themselves at once (but of course we did it too – probably peer pressure).

Alas, the truly stunning view of the Leaning Tower does steal the limelight from the beautiful, and in many ways more impressive, monuments that surround it. That’s a pity because the Duomo (Dom Santa Maria Assunta) and the Baptistery (or Baptisterium – the largest in Italy) are fantastic structures, and it is a great pity that in my experience the majority of visitors are only interested in the tower.” (2017)

You can get from Pisa Airport to Pisa Central Station on a smaller, fully automated train (PisaMover) in about 5 minutes.

It takes about 25 minutes to walk from Pisa's railway station to the Leaning Tower.

Pisa is an absolutely safe town; violent crime is non-existent. Even pickpockets are few. 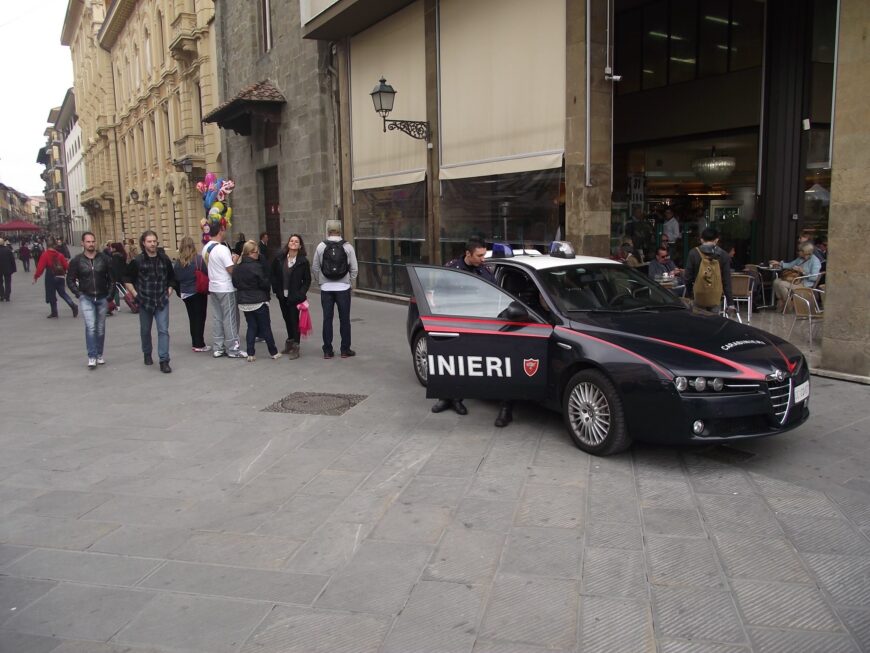 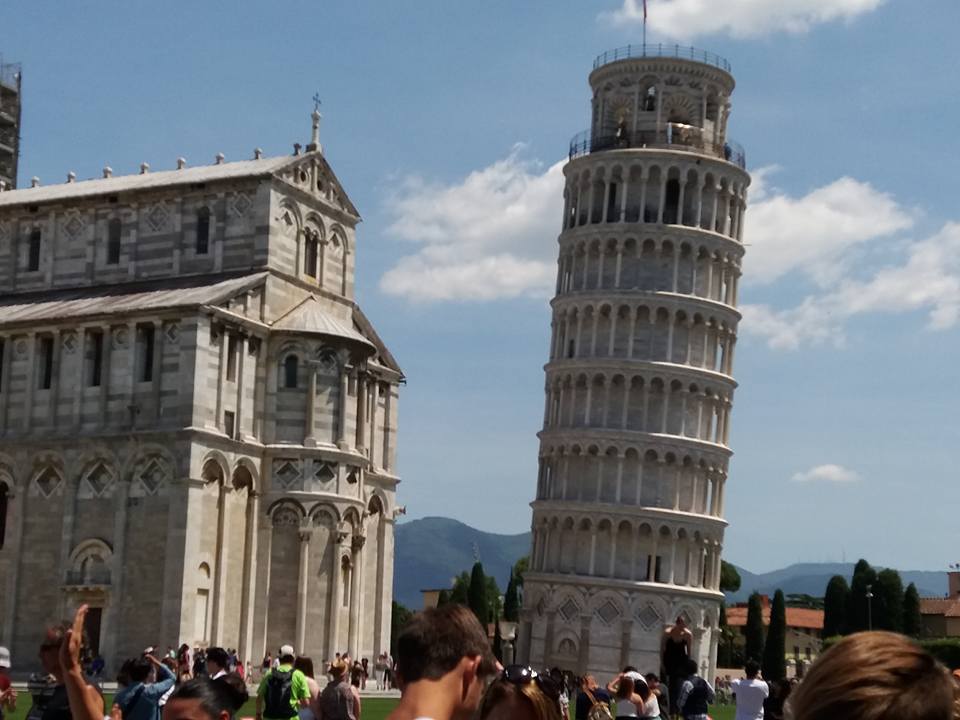 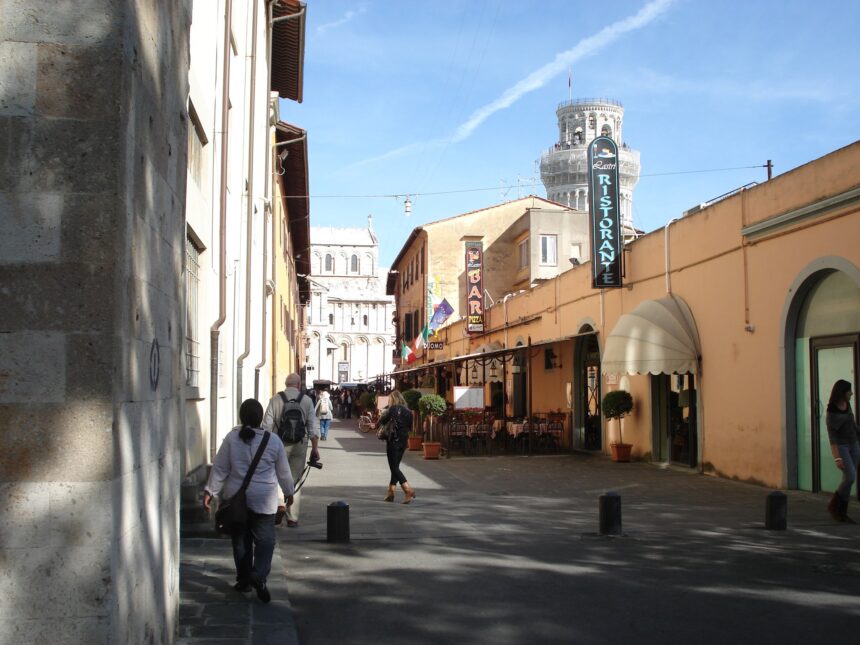 1. By no means think about any etymological connection between pizza and Pisa because there is no.

“This tower really leans. I mean to an unexpected extent, even though it’s already been pulled back a little, so it used to be even closer to toppling over. But I already know why it doesn’t lean over any further, and it’s not thanks to structural engineers, but thanks to the efforts of about fifty tourists a minute – or more – who hold it up...

We bought the tickets, the price is 18 euros/head to climb the tower, while the other buildings can be entered for 8 euros total. You can go to the latter at any time, but there are quarter-hour windows for the tower, and when you buy a ticket, it is also written how much space is available for which time.

The time for the dreaded task of climbing the tower has arrived. I have such a fear of heights that if I wanted to hang myself from a walnut tree I’d only be able to string up my lifeless body – vertigo would have killed me before the noose. I told my wife that I didn’t think we should buy two tickets and that I’d wait at the bottom.

Anyway, there is nothing else to see from above, since the only sight is this square, and I could already see that from the ground. All the same, though, it’s not as though you get to clamber inside a sort of giant pole stuck into the ground, which looks as though some passing giant has stumbled against it. I’ve already seen from the bottom that I’m going to be dead up there, there isn’t so much as a regular railing, and I’m going to need at least two feet of dead space to dare look at all. Courage ...

It's our turn, everyone gets scanned with a metal detector at the entrance, and here too there are soldiers with machine guns, the fearsome Ivecos, just like in Florence. Sometimes one of these gun-toting soldiers was standing right next to the metal detector, so that little sunburned Jürgen, all of ten years old, was standing at eye level with the barrel of a loaded machine gun. We can thank terrorists for allowing us to experience this kind of terror, even in their absence.

We enter the tower, which can hold around thirty visitors at a time, while at the entrance the tour guide saying some interesting things. Then you can begin struggling up the endless spiral staircase. I let everyone go in front of me, anticipating the possibility that I would have to turn back.

The stairs are just wide enough for two people, but I don’t want to have to squeeze past all these people, illuminating the stairwell with my white-as-a-sheet complexion. I set off, my wife reassuring me that it wouldn’t be scary and that I should just go.

When I got down, I fell to my knees in shame – can I really be such a goof? Like, I’m here now, but not really? I went inside again, but again, it was like bouncing off an invisible wall. So yeah, I can be such a goof, but I said that in advance. Goodbye, 18 euros!

Take care of yourself! The sight of the square was still worth it because with its very beautiful, ivory-colored buildings, the buildings in the glowing green square look as if they were the dried-out pieces of a dinosaur skeleton.” (2017)