1. Sightseeing from the shade of the many covered arcades on a hot day

2. Compared to its relatively small size, this city packs in a lot of interesting sights

3. The biggest square in Italy, the Prato della Valle, which is beautiful and relaxed, and most pleasant of all on a Sunday afternoon, when the market is held there

4. The enormous Basilica of Saint Anthony, with its unique style and beautiful frescoes

5. The Piazza des Signori, with its many friendly students – Padua is a university city

7. One of the better Italian cities for public safety

8. The old Jewish ghetto is relaxed and full of character

9. The Giotto frescoes in the beautifully restored Scrovegni Chapel

10. The police were very helpful; they even drew on a paper where we could park.

1. Trying to park in the city is a nightmare

2. When the students go home in the summer the city’s nightlife vanishes with them

3. Travelling straight from Venice, the city’s sights naturally don’t seem so spectacular
4. There are a few shady neighborhoods – the area north of the train station, for instance, or Via Venezia and the Centro Giotto. I wouldn’t say you’re at risk of being robbed, but still, the drug users and other odd-looking characters make you feel uneasy

5. For some reason it’s often foggy in Padua

6. Here too a lot of buildings are defaced with graffiti

7. After 8 pm on weekdays the city streets are essentially dead

8. The travel guide sang the praises of ‘one of Europe’s oldest cafés’, the Café Pedrocchi, but it turns out to just be a rather run-down old restaurant

9. One of the worst Italian cities for air pollution (only Venice, Milan, and Turin are worse)

10. some sidestreets are unclean, unkept

“Padua is a city of prohibitions, and tourists have to be aware of them. If you sit on the ground or lie down on a public bench in the street or in a park, you could receive a hefty fine. It’s forbidden to chain a bicycle to a tree or a traffic light. What’s more, claiming ignorance of these rules won’t help a foreign tourist – they’ll find you anyway. Begging is strictly forbidden, and in the downtown area it’s even forbidden to hang your clothes in the window to dry.”

Padua is full of young people and full of life! Between seven and nine in the morning the cafés are full of teenagers. This is part of their daily routine: before school, they get together for a black coffee and a (delicious) croissant, or a pancake stuffed with fruit and chocolate cream, then they sling their bags over their shoulders and head to school for about nine. There’s no sign of stress or annoyance – as though they’re going on some fun excursion, and not to school.

I love people-watching during this breakfast bustle: elegant ladies cycling by, with their pearl necklaces and designer sunglasses, the well-dressed gentlemen reading their papers and sipping coffee, the loud, cheerful groups of teenagers, and the polite waiters long accustomed to the breakfast chaos.

"Padua didn't disappoint. Although the short morning spent there was painfully little to look at everything closely, it was still enough to get a sense of the city’s atmosphere. Because it is close to Venice and was part of the Venetian Republic for many years, the Venetian influence can be seen and felt in many places. The many ornate colonnaded arcades also put me in mind of Bologna. I loved it. The city was just waking up when we arrived. Some of the market stallholders had already unpacked, some were still unpacking, but there were some who hadn’t even arrived, and there were practically no shoppers. Bathed in the rays of the rising sun, we crossed the square of Prato della Valle, ringed by statues and a wide circular moat.

Following the arcades, we easily reached Piazza del Santo. This square is an important part of the city in several respects, as this is where the Basilica of St. Anthony stands, named after St. Anthony of Padua, the city’s patron saint, who rests in a mausoleum within the church and attracts pilgrims. There are several statues by Donatello in the church, and the main altar was made by him, but since the mass was being held when we were there, we didn't walk around, but only went to St. Anthony's tomb, especially since we spent time in the belfry of the monastery. Since we were already late, we took only a brief glance at the huge Donatello’s huge bronze statue, Gattamalata, which stands facing the sun in front of the church. It is one of the sculptor’s principal works, and (apparently) depicts a Roman hero. From here we cut through the deserted street to Piazza Delle Erbe, where the Palace of Justice stands, and a little further on one of the buildings of the University of Padua.

As regards the university, it is definitely worth mentioning that this was one of the first European universities, that Galileo Galilei taught here for a while, and that the first autopsy was performed in his anatomy department in the 1500s, when it was still forbidden. There was a market in the square, of course, huge vegetable stalls occupied the whole square, so it was impossible to see at all, but the market was also very nice. Seriously! From here we were already turning back because we were pressed for time: we had an almost seven-hour drive ahead of us. By the time we got back to the square with the moat, it was full of market stalls, as well as buyers. So Italian.

It would be a wrong decision to enter the city center by car.  It isn't easy to drive in the narrow streets, especially during rush hours. You better find a parking lot a bit outside the center and start exploring Padua by walking. The tourist attractions are within walking distance.

Padua basically shuts down after 8 pm in terms of public transit. 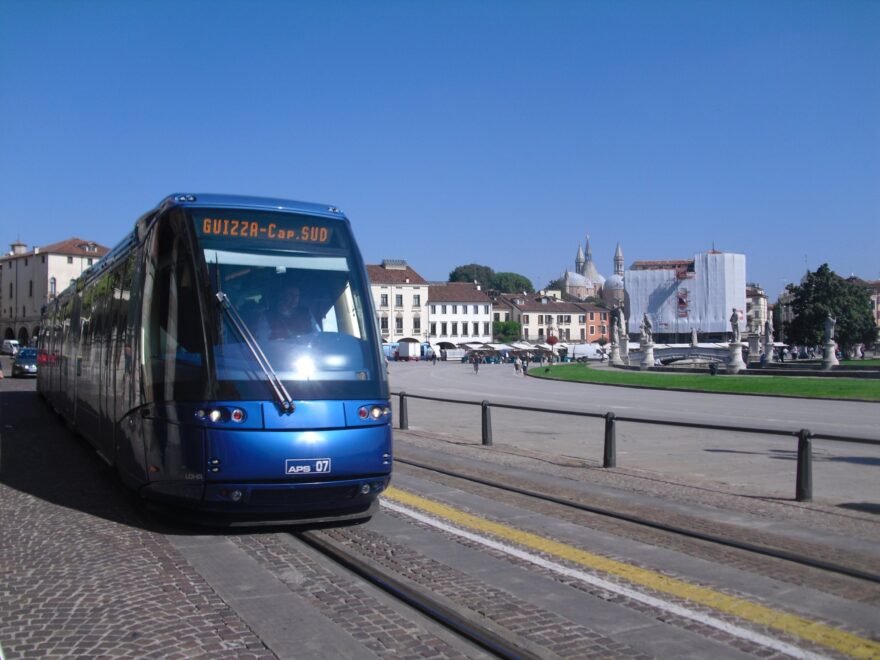 “In Padua, you can say that there is an ice cream parlor or a pastry shop on every corner, where you can go to chill in the company of a large helping of ice cream. In recent months, I’ve been trying to explore places that should by no means be missed when we’re in town. Gelateria Giotto is one of the most accessible places for tourists, about a 20-minute walk from the main train station and very close to the Scrovegni Chapel. The interesting thing about this ice cream parlor, at least according to a medical student I met in Padua, is that the ice cream is made by convicts who received education in the craft after their sentencing. Gelateria Gianni is also very close to Giotto, as well as the main university building (Palazzo Bo), and there are two such ice cream parlors quite close to each other, which in summer are still open even after eleven in the evening. The Italian teacher swears we can get the best ice cream in Padua here, but I found some that provide a more phenomenal experience even than Gianni.” (2019) 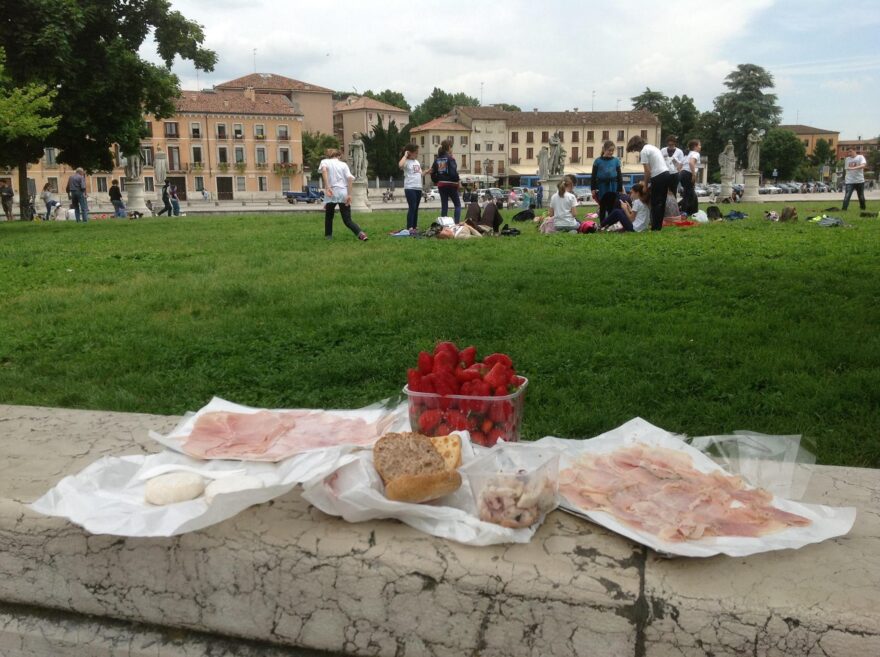 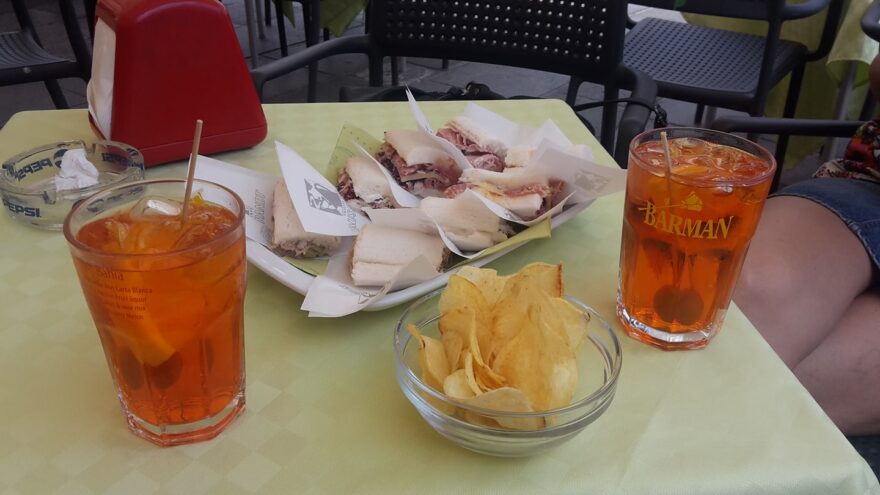 During the week, the markets start at 8 a.m. in Piazza della Frutta, Piazza dei Signori, and Piazza delle Erbe. On Saturday, worth it to walk through the market on Prato della Valle.

In most supermarkets, you can buy a full bottle of Prosecco for around 5 Euro. Make it cool before drink it.

Padua is everywhere safe daytime, but nighttime, some areas are gloomy, if not risky. After dark, avoid the surroundings of the Railway Sation. A lot of drug dealers and addicts hang around there. Even Prato della Valle can be a somewhat undesirable place in the nighttime. 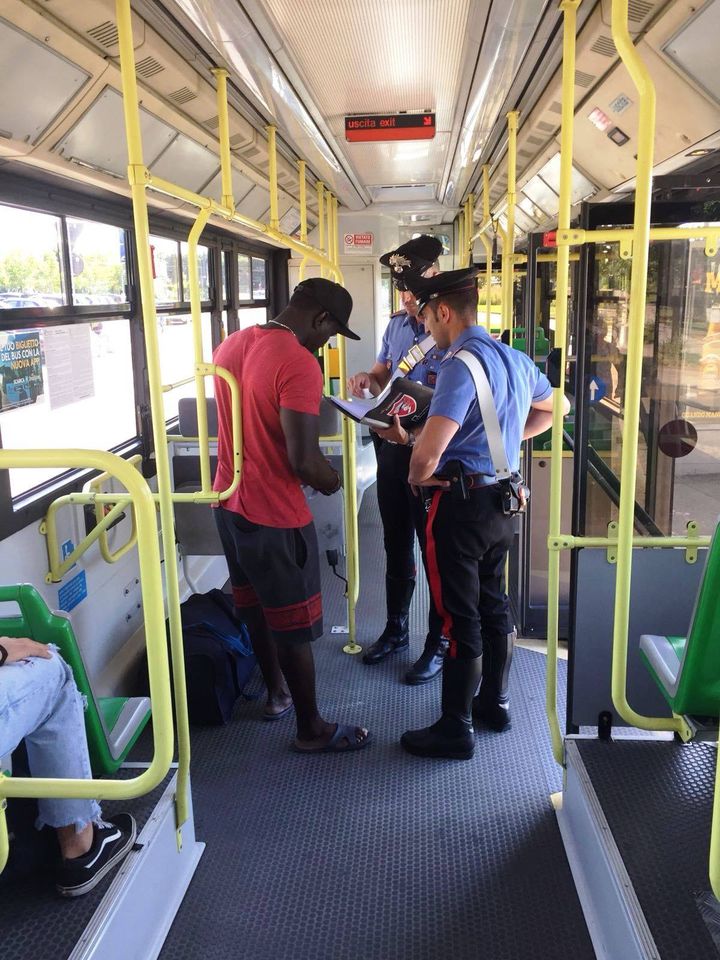 ,, In winter, the smog is very dense in Padua. In spring, pollen levels are high, so for people with allergies, March, April, May can be a problem.

One of the worst problems in Padua, that the pollution here is high, and the climate doesn’t help. Since it’s located in the lowlands of Italy, very large flat geographical areas, there’s not much airflow, and the wind is rare. It’s very humid year-round, and locals are afraid of the rain, and they have reason to be! When rain is coming, people close the shutters and lower the awnings, and hide in their homes, because it can be very intense.

Mosquitoes thrive here, so it’s good to be prepared for all these things in Padua." 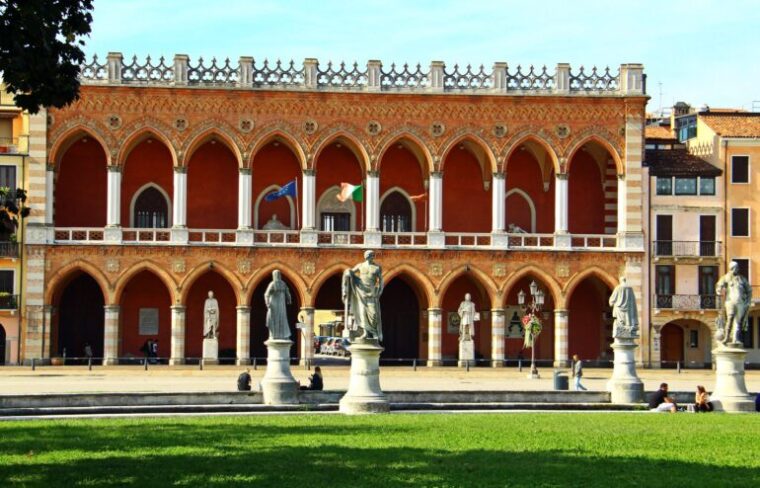 Optimal timing of a visit to Padua: May, June, September, and October.  (Bit, avoid the days around June 13, it is the feast of Sant’Antonio and there is a large tourist mass.)

Padua is the central location of William Shakespeare's comedy, The Taming of the Shrew (written 1590-1592).

The origin of the name Padova (Padua in Italian) is unclear. The Latin name of the town was Patavium, but that explains nothing. Maybe the reference was to the river Po (Padus in Latin). Some experts say that the origin of the name might go back to the original inhabitants' language, who spoke a Celtic language called Venetic.

The University of Padua was founded in 1222. It was the second university in Italy, after Bologna. Galileo Galilei was teaching here. Young boys from every corner of Europe came to Padua to study.

Padua is a rich north-eastern town. North-Eastern is one of Italy's wealthiest parts, and the cost of living is higher than elsewhere in the country. The ,, import" population (the massive number of university students) also contributes to the high prices of housing and food. 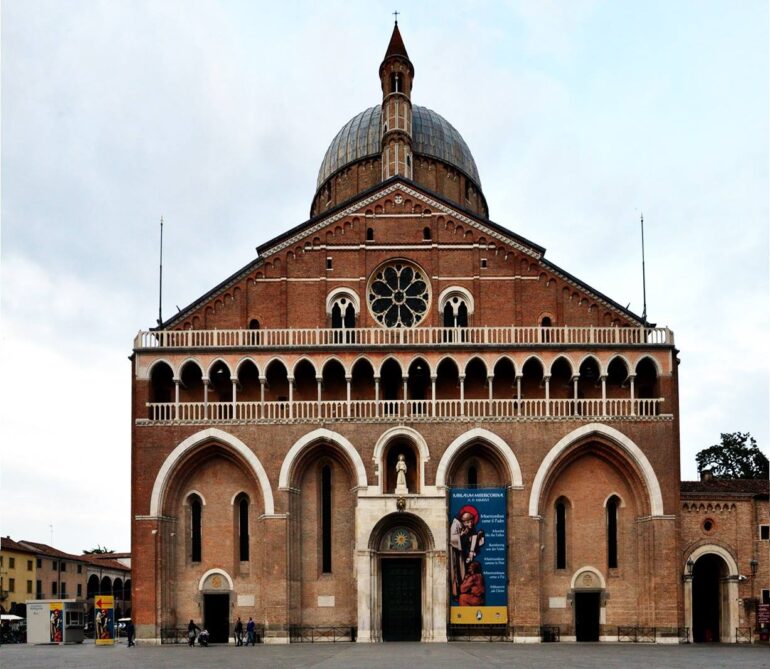 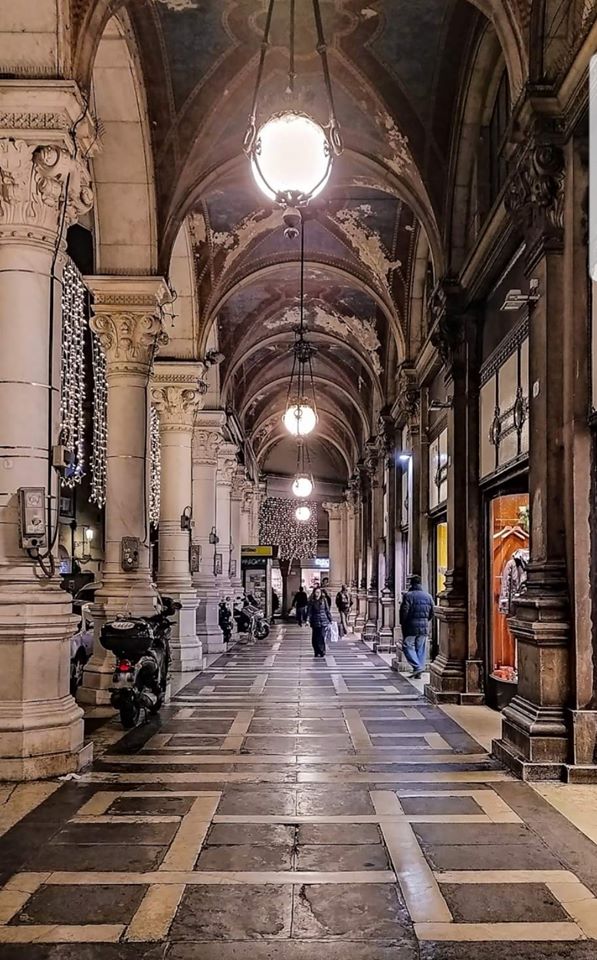 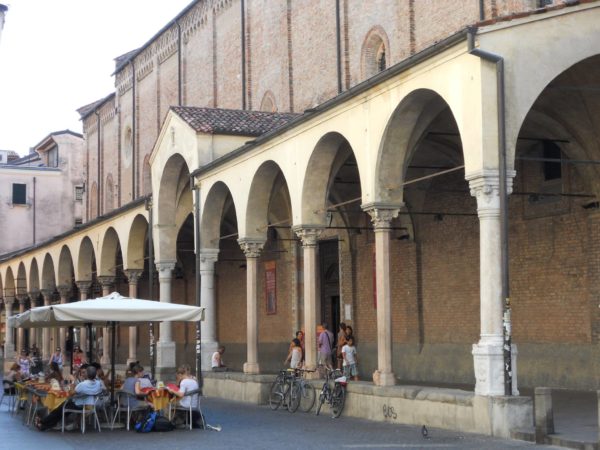 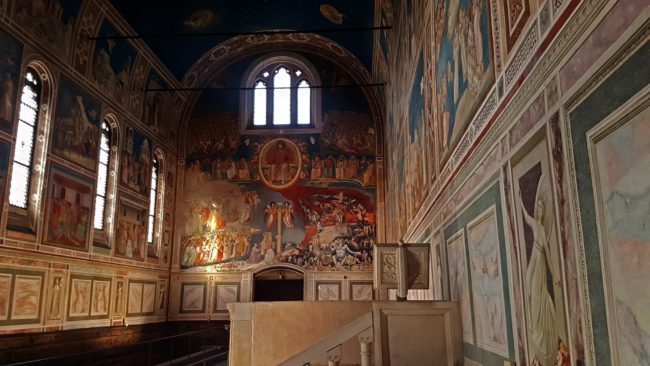 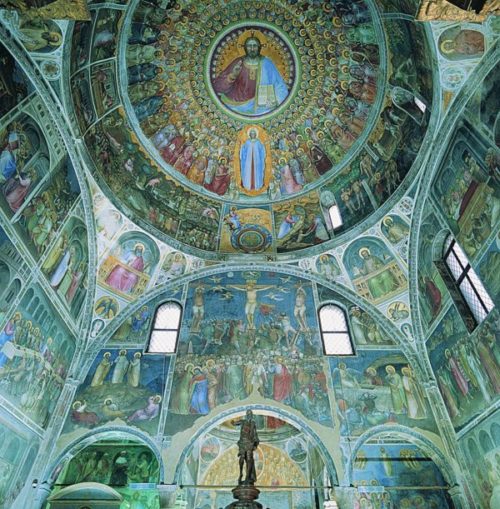 This is the third-largest square in Europe, after the Red Square of Moscow and the Place de la Concorde of Paris. 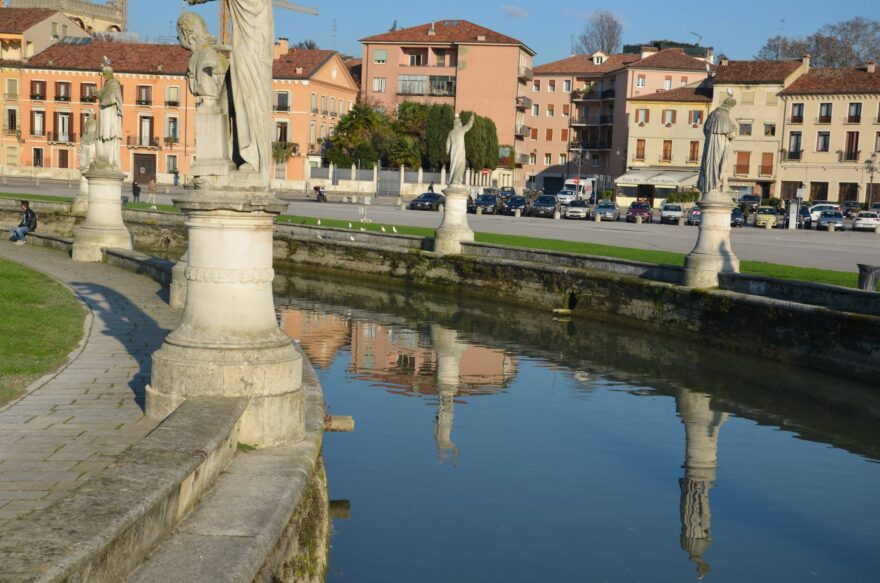