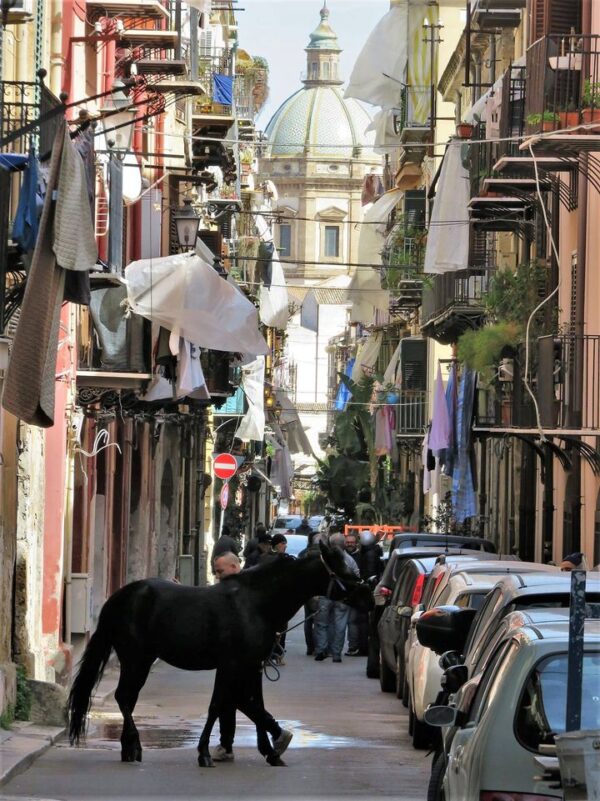 3. Stroll along Via Vittorio Emanuele

4. Eat Palermo canolli, which is the most delicious cannoli in the world (I've had it in many other places)

5. The cathedral is an exciting mix of architectural styles

7. Nearby Mondello with Art Nouveau villas

9. We took the local public bus, number 101 - we had the closest experience with the local people.

10. One day, at 8 a.m., we went to a close-by bar and had a cappuccino and a cornetto standing, like the regular customers - it was such an authentic milieu.

1. The catacombs depressed me

4. It is striking how many young local people are aimlessly hanging around on weekdays during the day, and we assume that they may not have a job.

5. We almost missed seeing the best art galleries because they are in hidden places.

6. We made the big mistake that we went out to the Mondello beach on a Saturday (in June) - terrible crowd (we were told that July and August is even worse)

7. Some street vendors are unashamed when proposing crazy prices to foreign tourists

10. At a market eatery, we had eaten very poorly cooked octopuses; it was quite stringy.

11. Palais della Zisa was a disappointment - its garden is not so attractive

12. Parking is a bitter challenge

“Walking through the streets of Palermo, you will be captivated by the beauty of the domes and churches, but at the same time, you will be amazed at the sight of the ghettos which cluster around the fish market. But that is what makes Palermo so unforgettable – every street tells a story, and we can only really experience it personally. Palermo is famous for its markets, its heady mix of aromas, and we can also taste the famous local street food (pane con la milza, sfincone, arancini, etc.), which is authentic and unmissable!”

“This is where I found everything I expected in a city in Southern Italy. I’d even venture to say that Palermo is the city I’ve most fully enjoyed being in, ever.

The large, shabby, bustling Palermo may not be to everyone’s taste, and in fact, I’m sure the mixture of horrendous traffic, poverty, and baroque splendor might even scare the timid off. This is a city of contrasts, where monuments recalling the glory of the past stand next to and between modern residential houses and crowded neglected streets.

Buildings are forever fighting for space in a city whose Arab bazaars, thriving harbors, miserable hovels, and bustling main roads sometimes offer a shocking contrast between the past and the present. As such, it was partly – but not exclusively – thanks to the local people that it felt so exhilarating to be here. It also feels as though the city itself exerts a kind of hum of excitement.” (2017)

Getting to Palermo from our accommodation entails a longish drive, but we make relatively quick time on the motorway. It is unbelievable what a good road network Sicily has. We approach the city from the port, so we get to see some of the less upscale parts of Palermo as well. Reaching the city center, we search for a parking space as we venture into increasingly narrow streets. We will soon be swallowed up by the alleys of the old town. The streets are getting narrow and getting narrower. We are reminded of an old French film where fleeing bank robbers drove somewhere to one of the similarly narrow streets of Nice in their small cars, and the pursuers could no longer fit and got stuck between two rows of houses. We are not being chased, fortunately enough, and the locals are very helpful – maybe mostly because they would be happy for us and our car to get out of there. It’s a good thing our car is Italian-made – with a German or American car we’d surely have suffered the fate of the pursuers in the film!

After our escape, we learn our lesson, and from then on prefer to visit the fountain of Pretoria Square and the group of statues that surround it on foot. Then, of course, we walk through the must-see sights of Palermo: the Norman church of Martorana, the Palazzo dei Normanni, and the former royal palace, which is one of the most beautiful palaces in Italy. It is a pity that we cannot get into the building that was once built as an Arab fortress because the Sicilian regional government is located here. The greatest experience is, of course, Palermo Cathedral, which was once a Muslim mosque and was not converted into a Christian church until 1185. Today's building no longer boasts a 12th-century exterior – much more characteristic of its overall style are the late Gothic features and the 18th-century cupola.

We try to get back to our car the other way, shortening the distance, and taking every shortcut. This is how we get involved in the less touristy districts of Palermo, wherein some houses and their surroundings could easily shoot a movie set in a bombed WW2 city. Hundred-year-old facades tilt alarmingly, and bushy weeds grow from the bricks of the walls that have lost their plaster. We stumble into a market a few blocks away. It doesn’t really feel like an Asian kind of chaos, but a more familiar, European kind of market. The scent of Italian ham and citrus fruit wafts through the tourist-free crowd. A real southern cavalcade! After a few streets of slums, we reach the Arab part of the city: the smell of a hookah, oriental spices, only the muezzin is missing. And this is Palermo too!”

"After the quiet, peaceful small towns, Palermo, where I arrived during the evening rush hour, was quite a shock. I explored with the help of a ‘use it’ map put together by local young people, so in addition to the sights known to everyone, they also listed their own favorite places, including small, hidden shops and cozy cafes. (A similar map has been made in several big cities, including Budapest). Palermo is not as simple as other major Italian cities, where it’s easy to know just where to go for immaculate and impressive sights. There are one or two priority, must-see sights here, but beyond that, you’ve just got to head out there yourself and find the treasure among the mounds of rubbish.” (2015)

You better leave your rented car somewhere in the city's outskirts, as driving and finding a park place is hard in Palermo.

Most of the locals complain about the public transport of the city.

Punta Raisi Airport is 35 km west of the city. You have to take the short A29 motorway to Mazara del Vallo to get there. The same route, buses, taxis, and private transfers connect the airport to the city center. There is also a local train, the Trinacria Express, which runs from the airport station to Palermo central station.

From the airport to Palermo you can take the official bus service. The return ticket costs € 10 and buses leave every 30 minutes. Taxi is expensive in Palermo, which is a shame, especially for out-of-season beach trips. In summer, the 806 bus takes you to Mondello beach in about twenty minutes.

When crossing, be careful, of course, but be aware that cars and scooters are much more vigilant of pedestrians than in many other cities in the world. Drivers even stop without flinching if you cross out of a crosswalk. 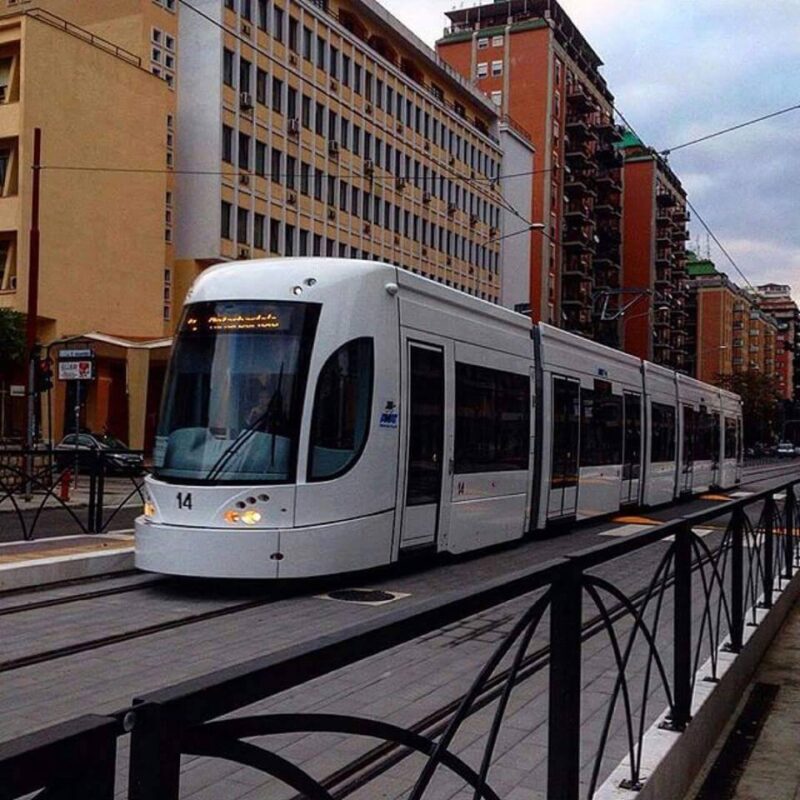 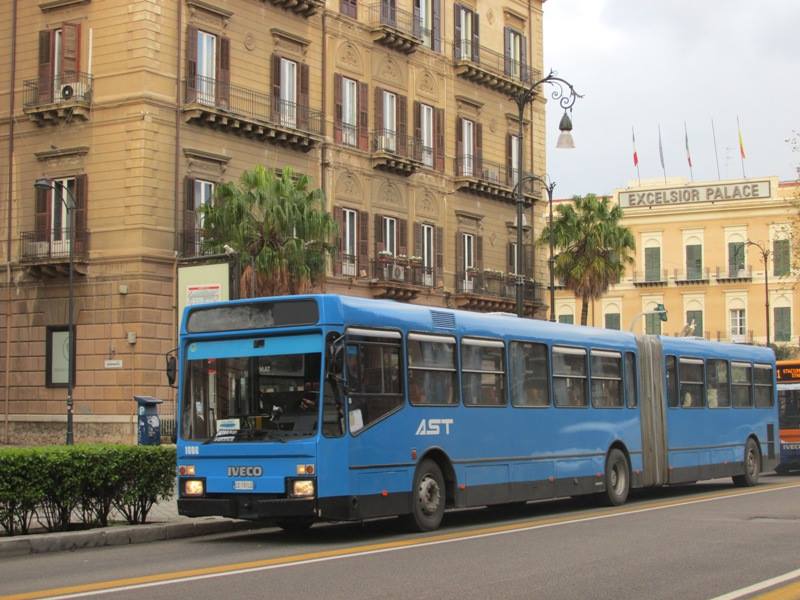 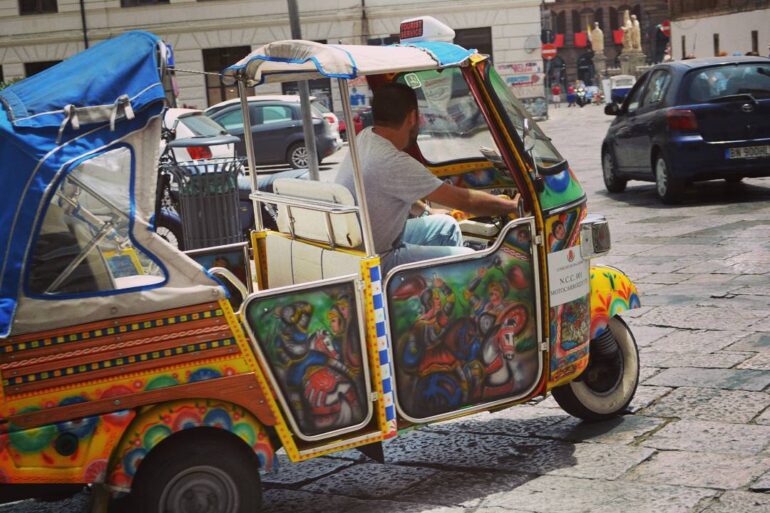 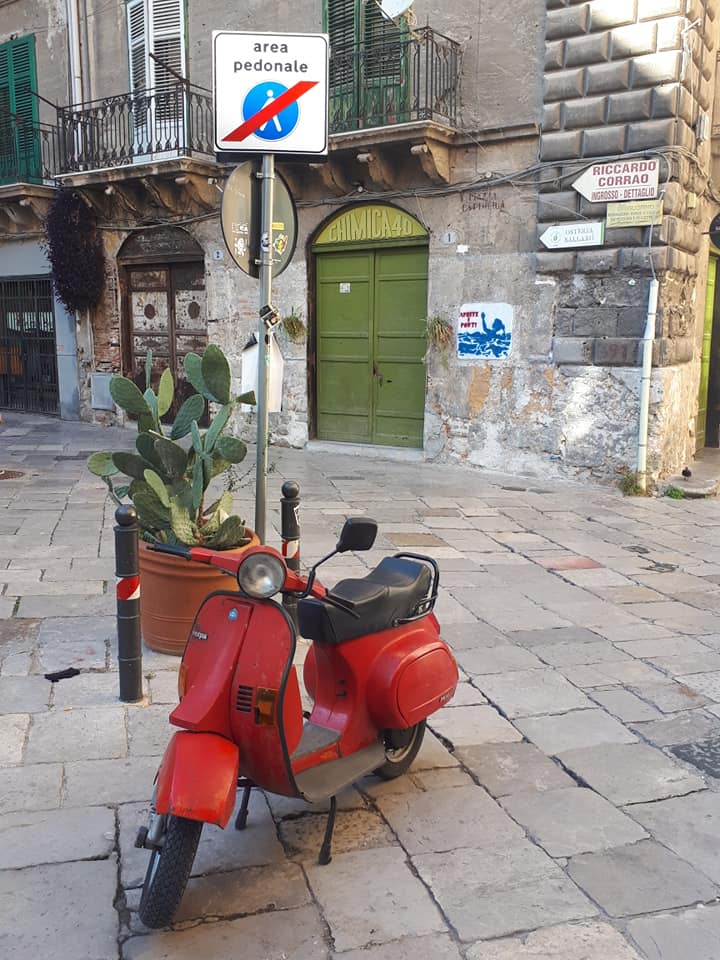 There is a chance to find good deals on Airbnb. To make the most of the city center, we would recommend staying between Via Maqueda, Via Roma and Via della Liberta, near these 3 points: Piazza San Domenico, Teatro Massimo, and Politeama. As the city center is small, you can choose accommodation in surrounding areas as well. The Kalsa neighborhood, for instance, is quiet, romantic, and lively at night.

One of Palermo's street food favorite is the veal spleen served in a sandwich or panini. 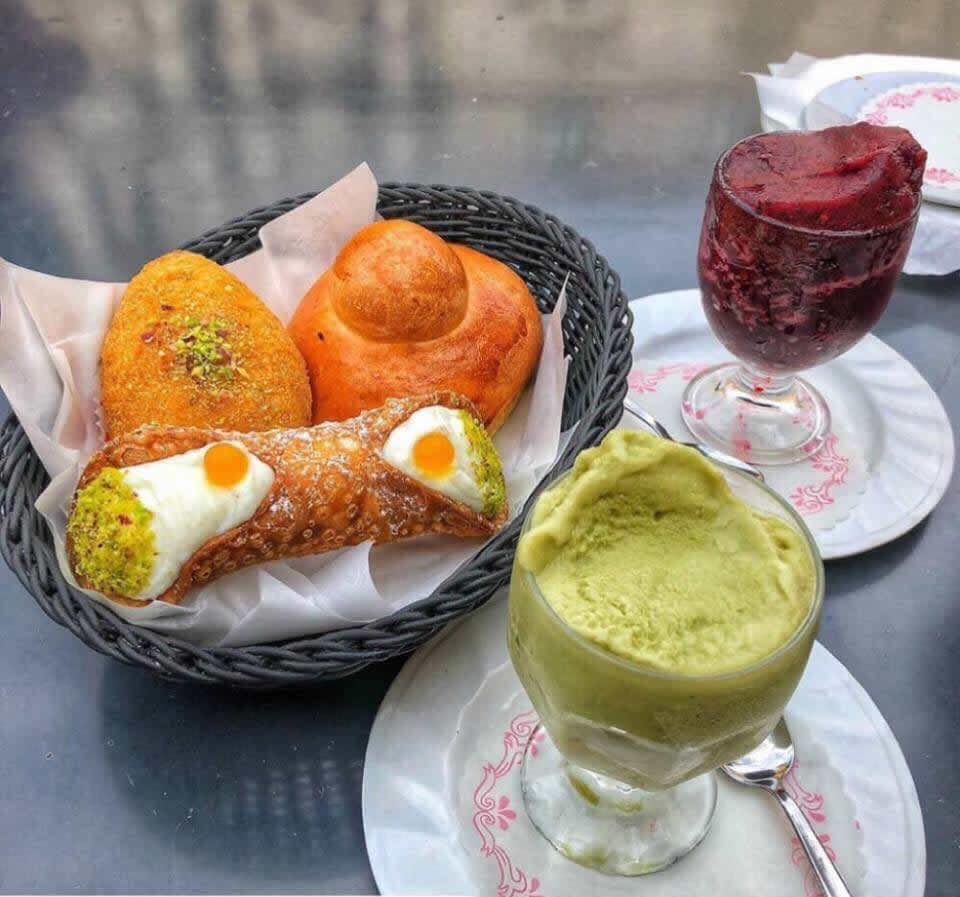 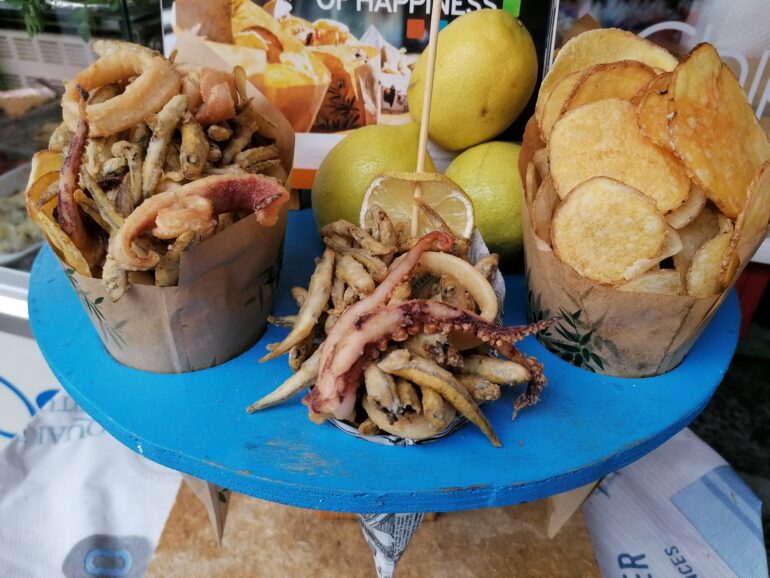 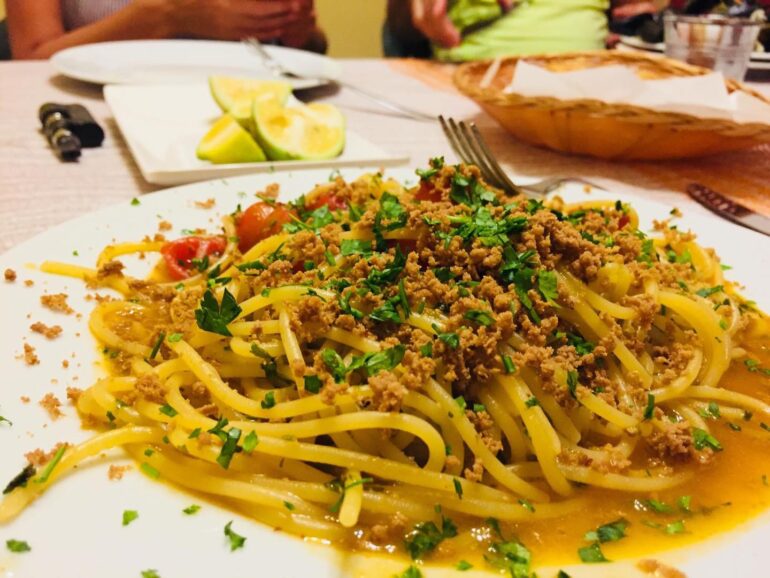 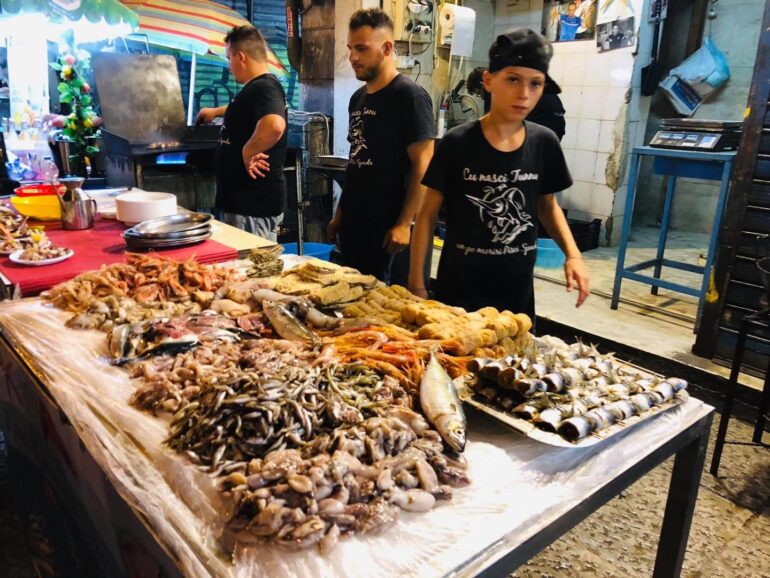 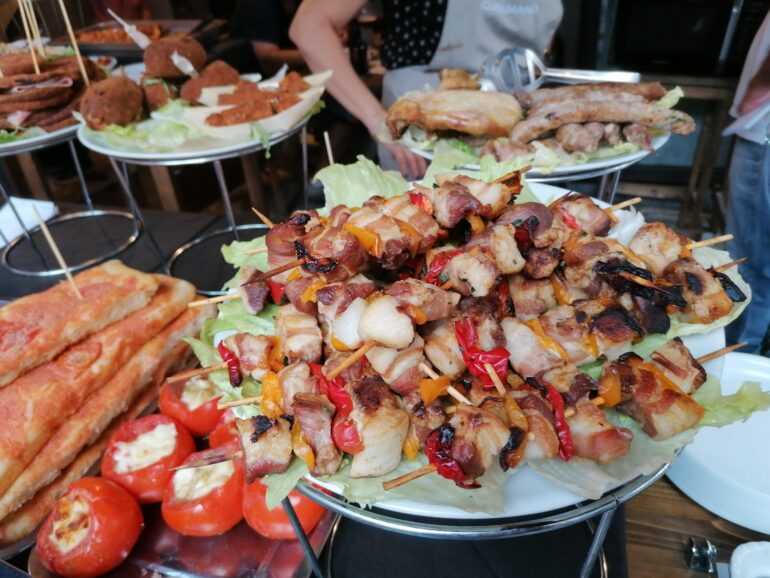 The fancy boutiques are concentrated around three streets:  via Libertà, via Ruggero Settimo, and via Maqueda). Almost all luxury brands (Versace, Dolce e Gabbana, etc.) or ready-to-wear chains are in this area.

In Palermo, three markets are open daily from eight in the morning, except on Sundays. Not that there are many buyers on a Monday – in fact, there are hardly any – and there is little movement on Tuesday either. But the sellers arrive in full force and with beautiful goods every morning. They unpack, lure buyers, joke, and feel good. In their own skin, in the market, in the world.” (2017) 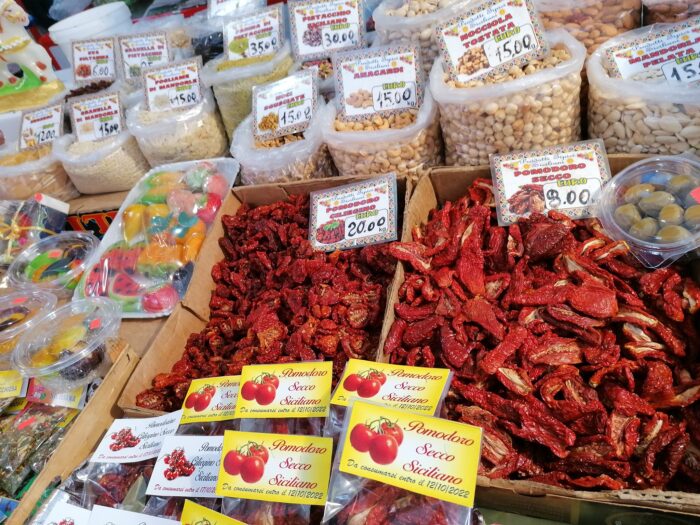 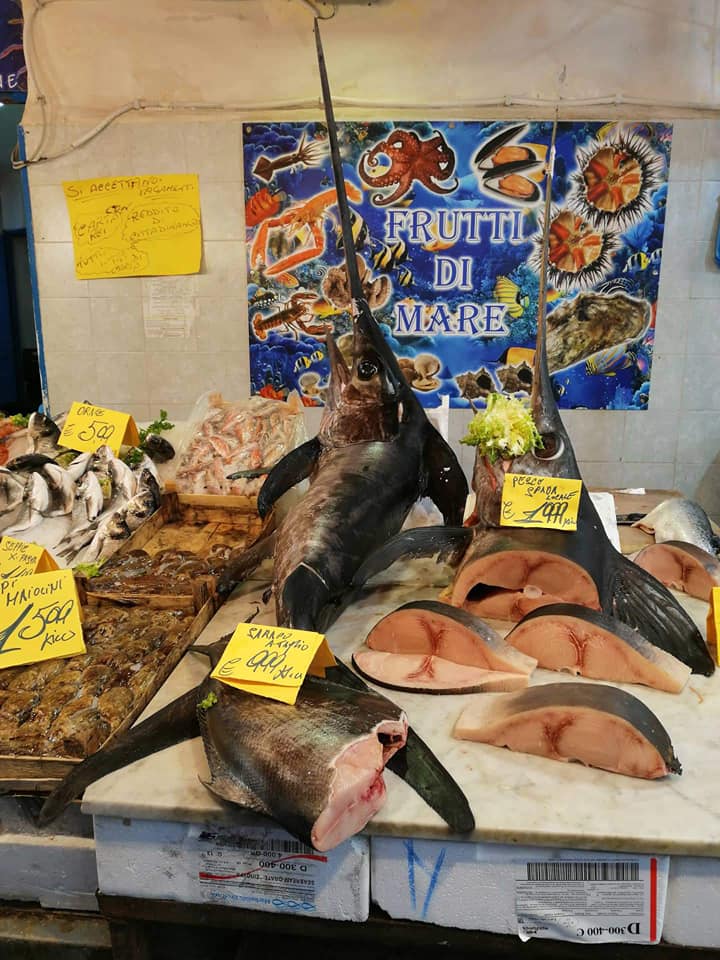 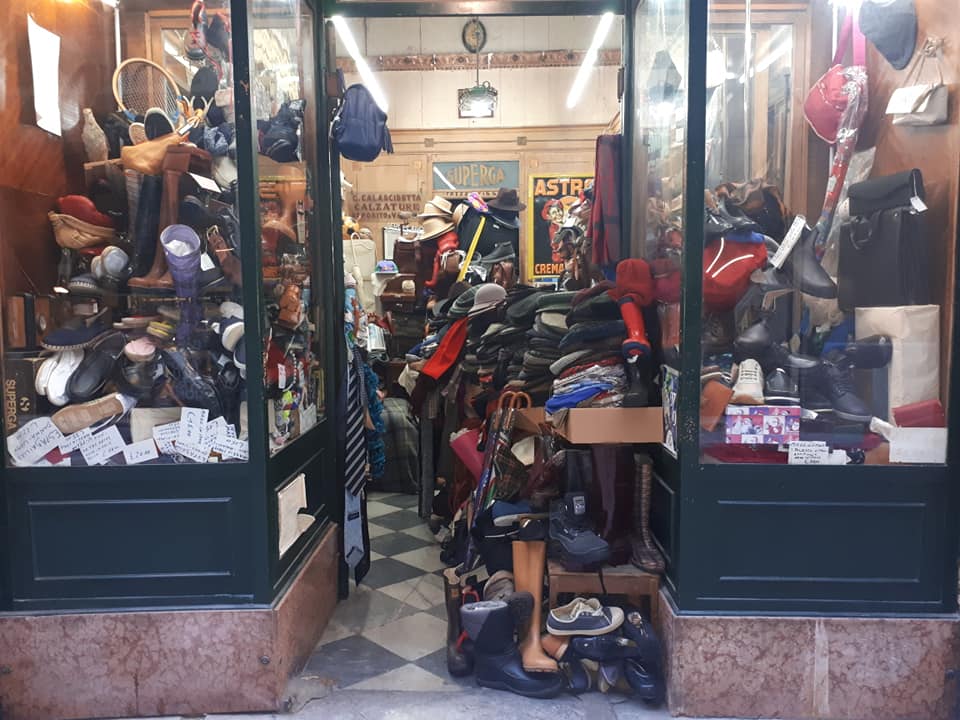 Palermo - Order is the soul of everything. - Ata photo

Champagneria is the liveliest part of the city in the early evenings. Tourists, cool locals come here to drink wine in one of the wine bars. 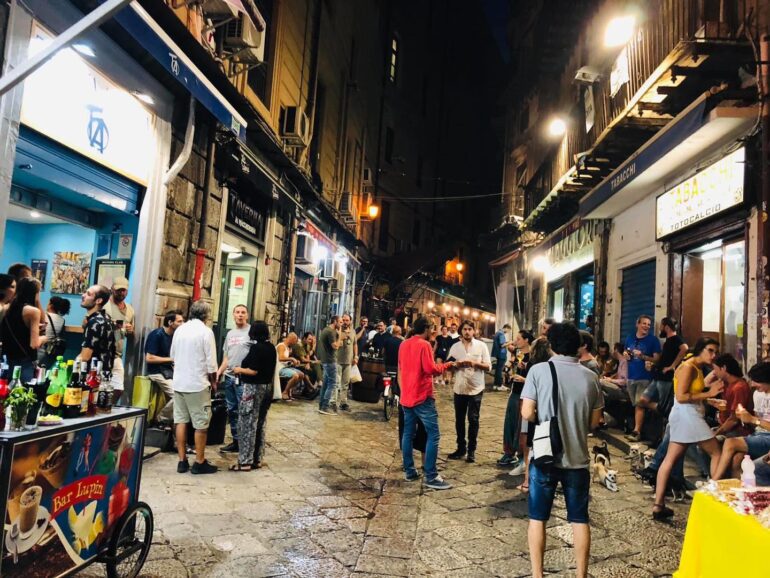 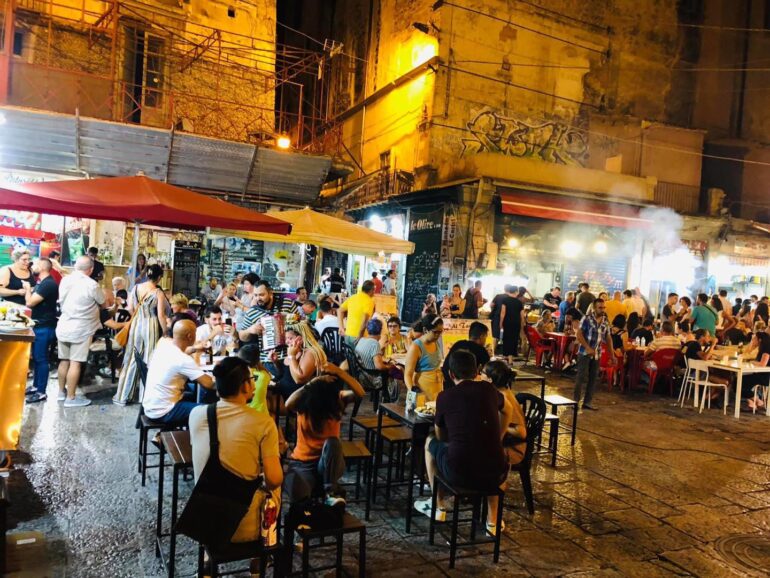 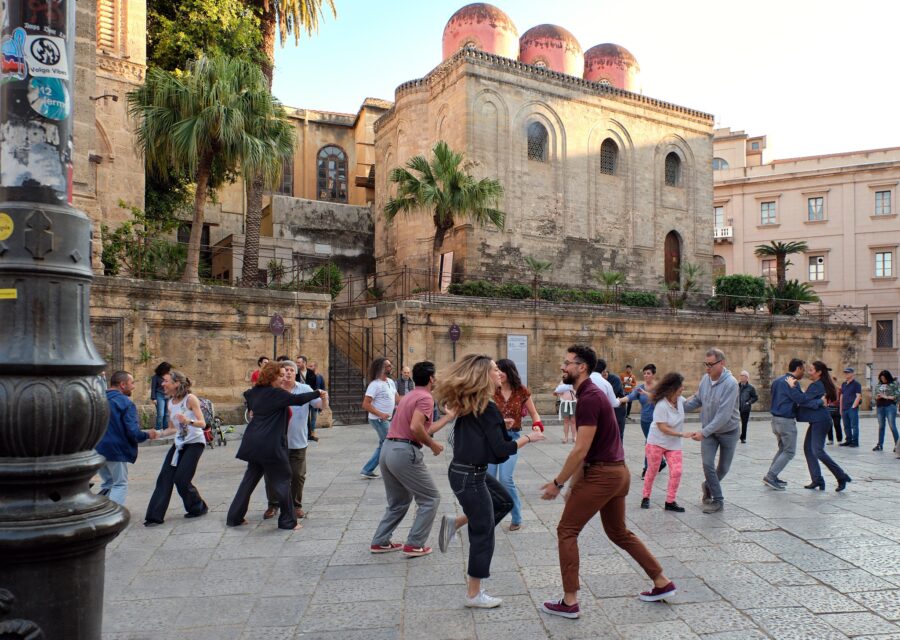 As far as security concerns, there are few risks - but still avoid the Ballaro district, especially in the evening because of the African gangsters. Then again the Mafia does not present any risk for tourists: its interest is drug trafficking, exploiting lucrative waste disposal business, and laundering dirty money by taking over companies. 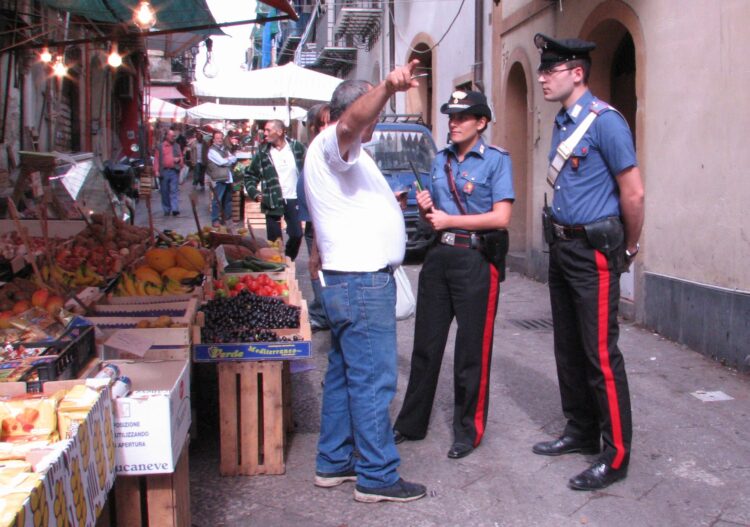 Bring sunscreen, mosquito repellent, and headwear, even the months before and after summer. 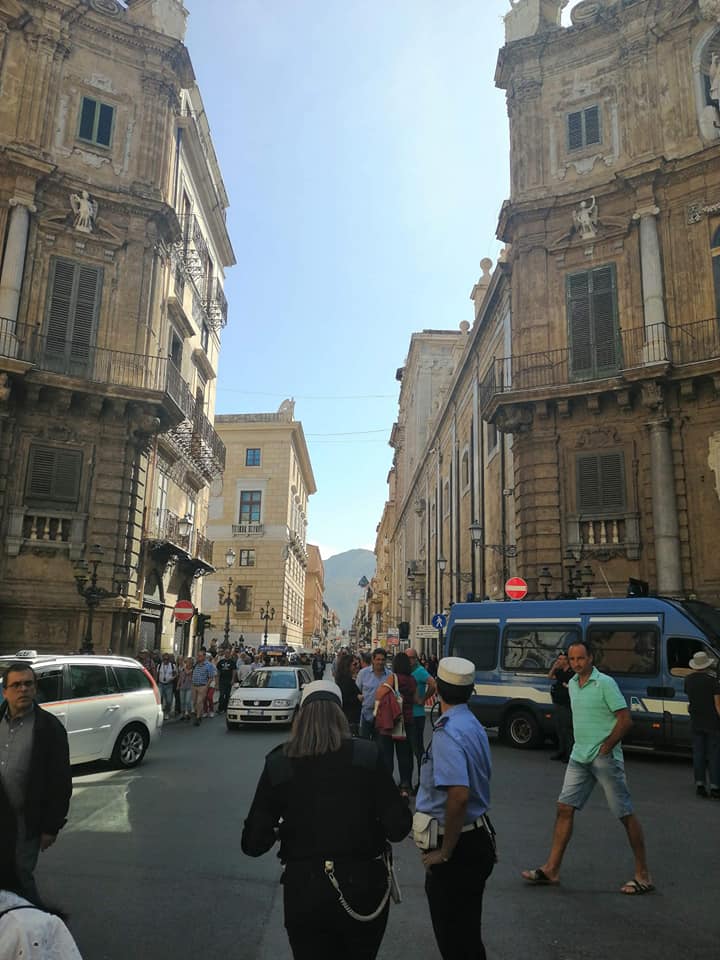 Palermo, the "capital" of Sicily, is in the northwestern part of the island, in a bay on the Tyrrhenian Sea.

Palermo got its name from the Greek Πάνορμος (Panormos).

From November to March, temperatures hover around 12 C (53F), so it is OK to wear a light sweater or jacket.

The optimal timing for a visit could be April to October. Spring is mild, and swimming in the sea is possible. In summer, sea winds moderate the heat. In autumn, rains are frequent, still OK to discover Palermo and its surroundings, thanks to the season's mild and pleasant temperatures! 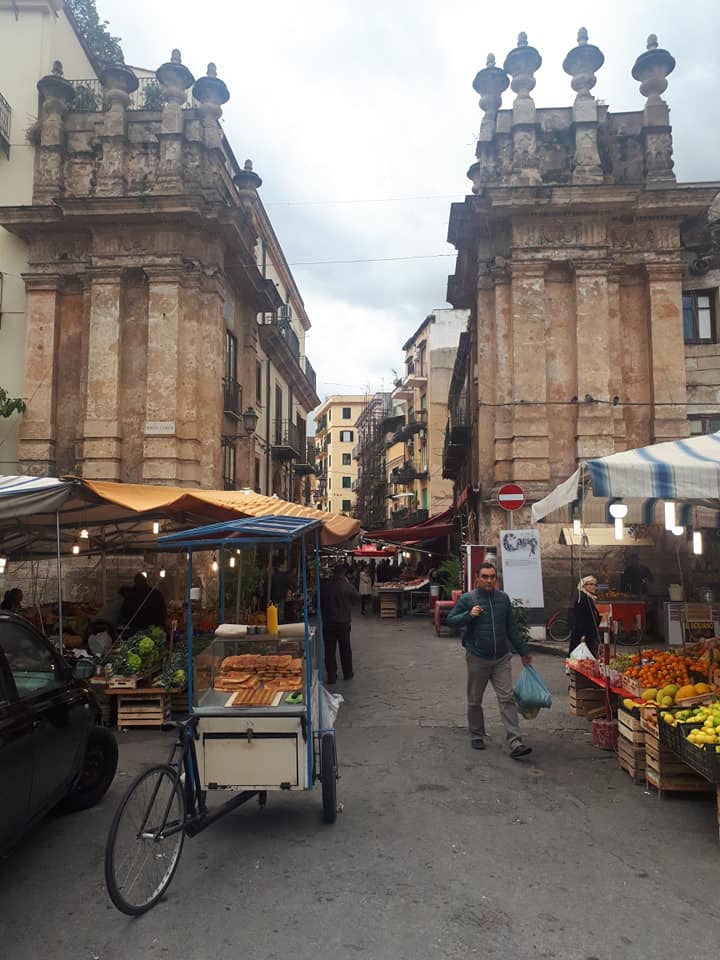 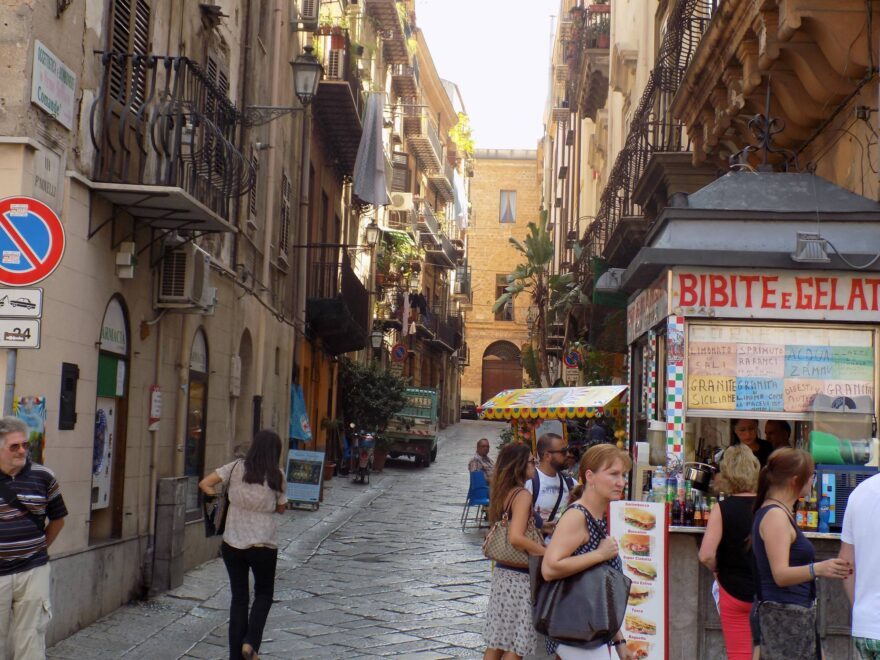 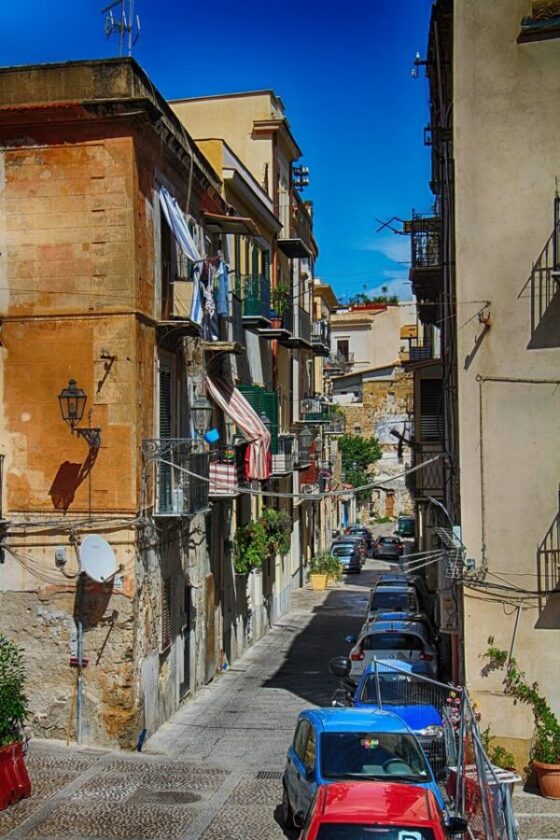 ,, It seemed to us that there was little room for such forms of politeness like thank you, see you again in the communication of the Palermo people. The situation might be different in the family or among acquaintances. (aji).

1. Don't force the Mafia topic during conversations with locals. Palermo people are bored with this topic, especially in the simplistic form that lives in foreigners' minds.

2. Tourist girls, women, can expect Palermo men's intense gaze if they wear,, minimalist" clothes. The good news is that neither physical nor verbal harassment is common. 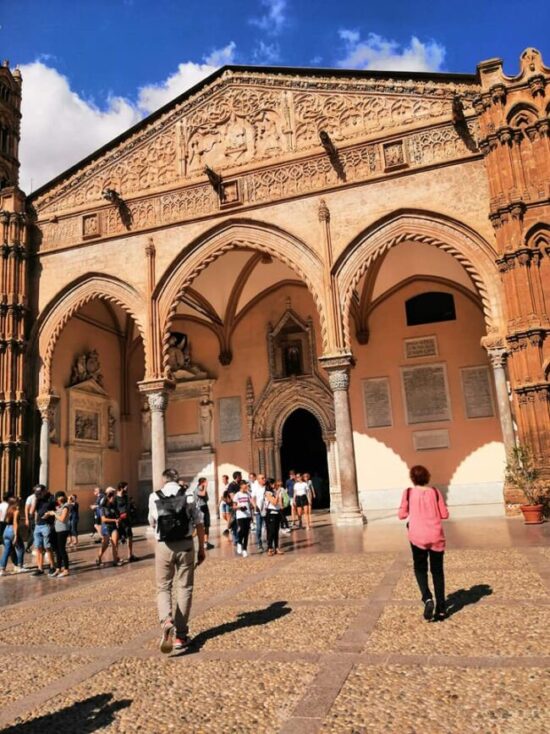 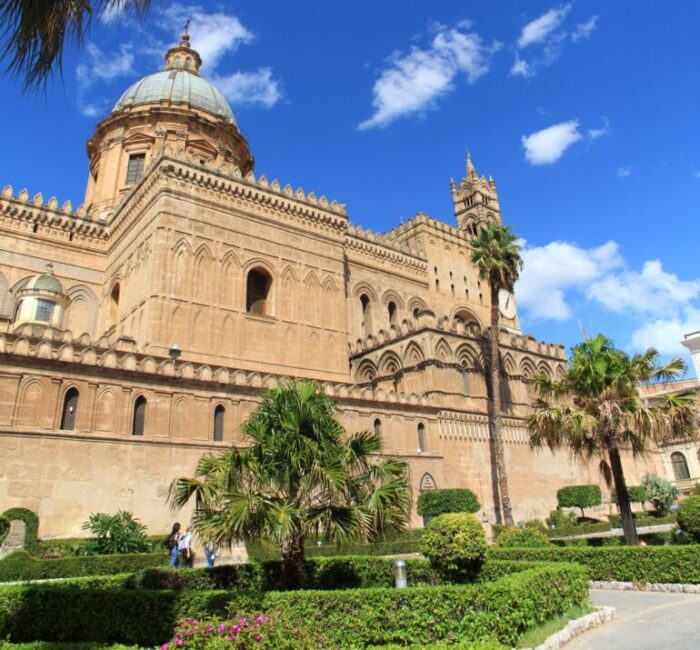 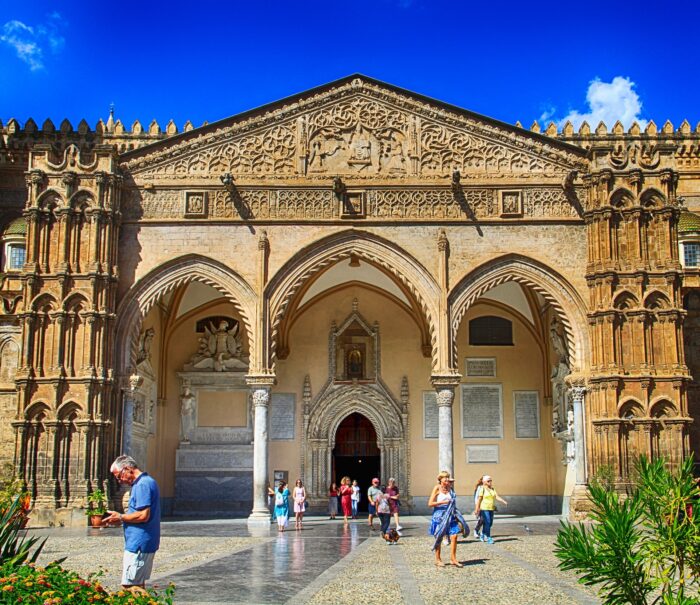 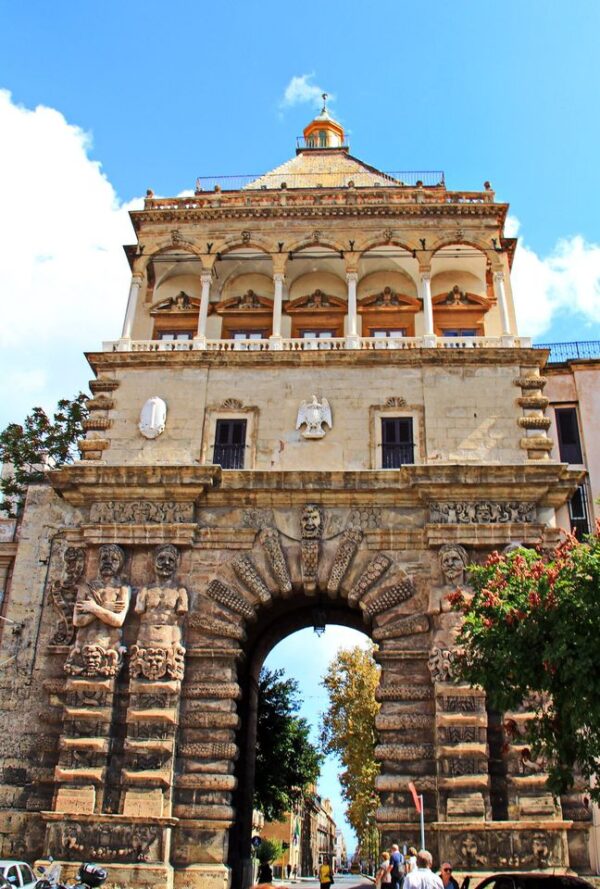 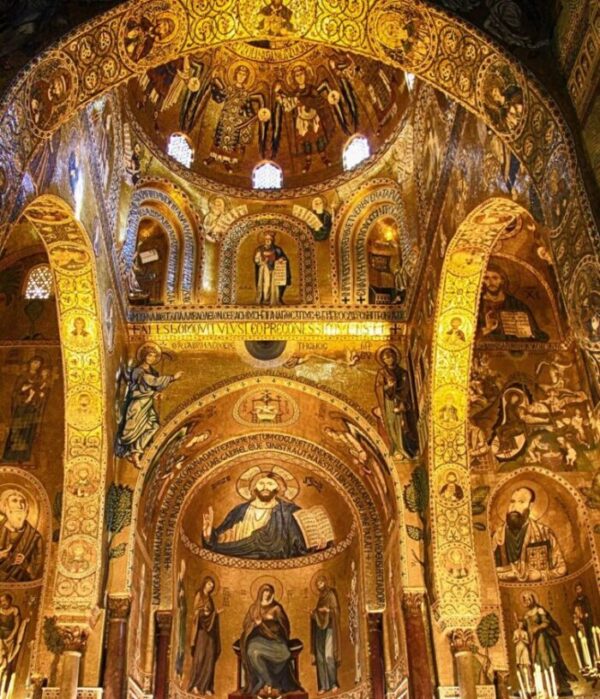 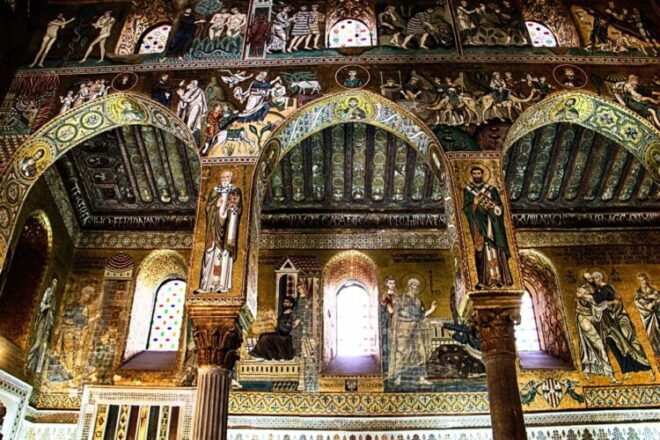 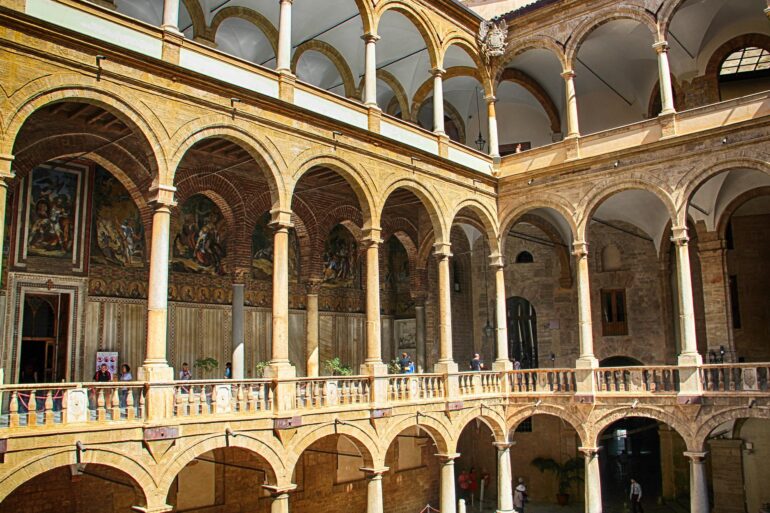 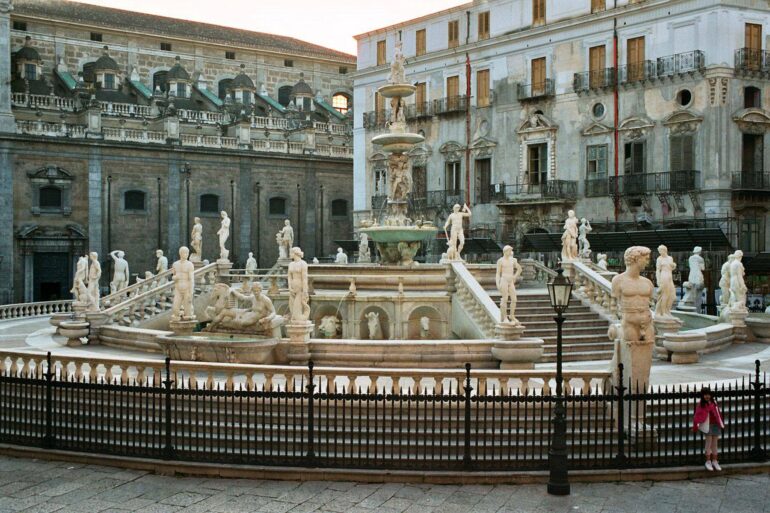 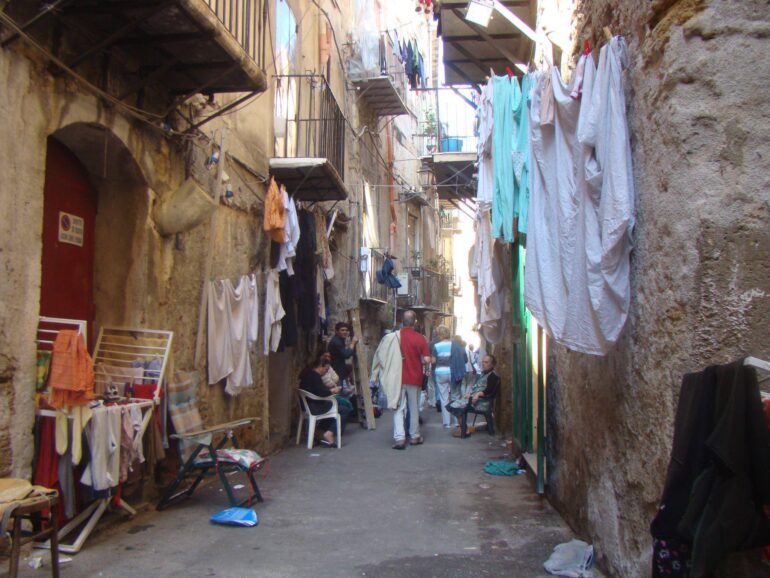