1. The vintage trade signs in the market of the Triana neighborhood

4. The divine Gambas al Ajillo, shrimp in hot garlic oil, served in a skillet along with some crusty bread

7. The facades and  wrought-iron balconies of the old buildings

1. The displeasingly loud gypsy beggar's ladies who almost block the entry in some churches

2. The obscurity of the tariff calculation (extra amounts added to what the taxi meter shows)

3. The stress of avoiding to step on the dog poops on the sideways

4. Senseless to take the hop on hop off sightseeing buses, because walking in Seville is far more enjoyable

5. Maneuvering with our car in the narrow streets of the Old Town

6. Find parking place in the center

“Guys! Seville was a massive (and positive) surprise for us. It’s a gorgeous city, with so many breathtaking sights on every corner. Definitely the highlight of our trip through Andalucía. I’d recommend two full days at a minimum, and probably three. (aji, October 2019)

“This is not the sort of city where it’s worth getting up at dawn, to be out eagerly seeing the sights by eight. During our short stay we found that life begins at about ten o’clock, then shuts down again at two in the afternoon, before shops begin to reopen at about five. People come and go, talk, shop, and walk around until almost nine the next morning. They sit in their favorite bars and watch the football, and if there aren’t enough seats they stand, beer in hand, and eat tapas or a cookie. Bars and restaurants are generally open until about midnight – the city gets gradually quieter after that.

“The city is divided by the Guadalquivir River, the slow current of which makes it an ideal place for kayakers. The riverside Is also very popular, with running tracks and cycle lanes that are busy in the evening. Some wider stretches of green have become little parks, with statues and benches. It functions as a pleasant, shaded, green promenade, and is perfect for a stroll. Set below the level of the nearby road, which runs along a retaining wall, the bars and bullfighting museum on the other side can be directly accessed through tunnels. Brass band concerts often lift the mood.”

“We encountered a serious hurdle in the subway when buying tickets. Luckily, a nice local lady rushed to our aid and punched the necessary information into the vending machine.
That is, she asked where we were going, and then if we were coming back by subway from there, and pressed the appropriate text on the screen accordingly, but I had already lost the thread at the third step. Eventually, the machine issued a small card, which, as the lady said, was valid for the two of us for a return trip. It really was, because the automatic gate let us both in. We went down the escalator and waited a minute or two. The Seville metro is very cool, anyway. In addition to the fact that, as I have seen, it’s pretty much impossible to ride without paying, it also stops anyone from ending up in front of the train.”

“Getting around by bus in Seville is easiest and fastest if you’re going a little further. The ticket costs 0.90 euros. Buses run daily from 6 a.m. to 11:15 p.m. The tour desk provides a map of the bus lines to help you find your way around. If you travel a lot by bus, you may want to buy a rechargeable card at a kiosk. If you are in the city for at least a month and use public transport frequently, buy a pass. The bus network consists of circular routes (C1, C2, C3, and C4) and other lines (north, south, west, and east). You can catch most buses at the following four nodes: Plaza Nueva, Plaza de la Encarnación, La Barqueta, Prado de San Sebastian.”

“For private transport, the car is the most popular, although I see a lot of moped riders in suits every day. Every square in the city has about 10-15 mopeds parked in it and as many bicycles. Despite being in a Mediterranean city, you feel like you’re in the Balkans when driving here, except on multi-lane, motorway-like roads. Although the red and green signs on the lights are followed, I soon learned from the locals that it’s not mandatory to follow the direction of traffic – at least if you’re on two wheels. For example, I go down five streets between the office and the workplace. Four of them I have to go against the traffic, on the road next to and between cars, as there is just no bike path and the sidewalk is generally only 50 centimeters wide – often only 30! – and is occupied by daydreaming pedestrians. Furthermore, many roads and streets are one-way, usually because they are too narrow for multiple lanes. Many times, even turning around is complicated and difficult. 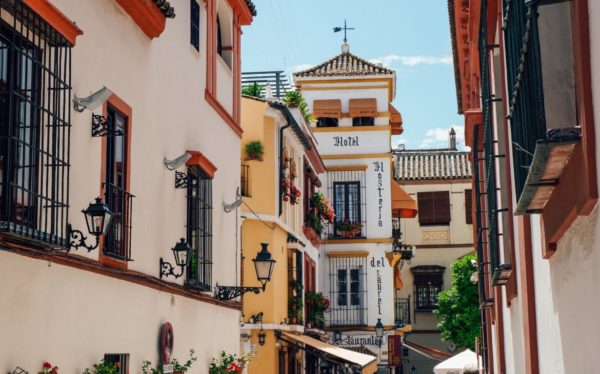 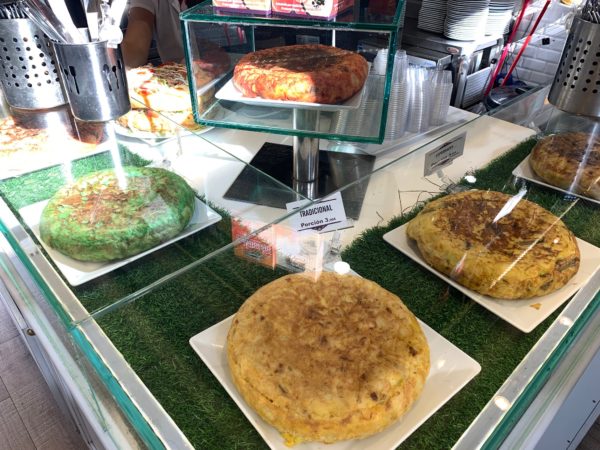 “The Triana bank of the river, the district of Calle Betis, is one of the city’s busiest entertainment districts and is especially famous for flamenco. It’s possible to listen to or dance the flamenco or the sevillanas (a variant of flamenco), sing, improvise, and spontaneously update old songs with new instruments, rewriting in a genre that in any case allows space for free improvisation. Professional musicians entertaining in the area are very open to this. You can also dance to popular music and there is also a rock bar here, sometimes with live concerts.

The riverside retaining wall connects to the street in the form of a single, long stone bench. In the evenings, people sit on virtually every inch of it, with drinks that were either brought from home or bought at one of the nearby bars. Towards dawn, a mood of self-forgetful cheer seeps into the surrounding streets, including ours, and breaks the sighing silence with sophisticated flamenco singing, drunken yelling, or just friendly laughter. Moped rodeo also goes on all night, roaring under our window every half hour through the night, and the one religious procession we encountered (or procesión in Spanish), didn’t impress us as much as all of the above.”

Sevilla is the largest city of Andalusia in Spain.

The Sevillanos are great local patriots. Their number one identity is Sevillanos, number two being an Andalusians, and number three only being Spanish. They don't care much about Madrid, while they think about Barcelona almost as a foreign city.

Sevillanos concede that their city is the real birthplace of tapas.

90% of Seville’s population is Catholic

Sevilla - The tomb of Christopher Columbus in the Sevilla Cathedral - the total weight of his remains is 200 grams - k.l. photo 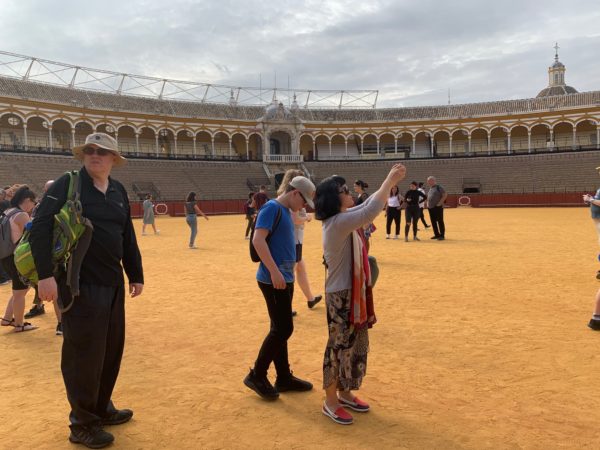