2. The lagoons and beaches of Jandia, especially Playa de Sotavento – really fantastic, the colors of the sea are just like in the Caribbean

3. Our hotel was in Corralejo, and we loved this casual small town, great for non-snobs

5. Walking or jogging on the deserted beaches in the morning

7. The excursion to the small island of Los Lobos

9. Fuerteventura has more beautiful beaches than any of the other Canary Islands!

10. Costa Calma is very nicely developed with a lot of man-made green areas and palm-tree gardens

1. When the wind blows sand in your eyes (sunglasses are a must)

2. We failed to appreciate the black sand beaches

3. Betancuria and Antigua were a bit disappointing – nice, but not must-see attractions

4. The sun can be treacherous – I didn’t feel the heat but my back and head got painfully sunburnt

6. The dunes at Corralejo are impressive, but not as fabulous as those of Maspalomas on Gran Canaria

7. I tried my best (and failed) to overcome my stereotypes about the esthetical shortcomings of the British tourists

9. We did not expect too much from the capital city, Puerto del Rosario, and we were right, it’s nothing special

10. Most of the landscapes in the island’s interior are dull 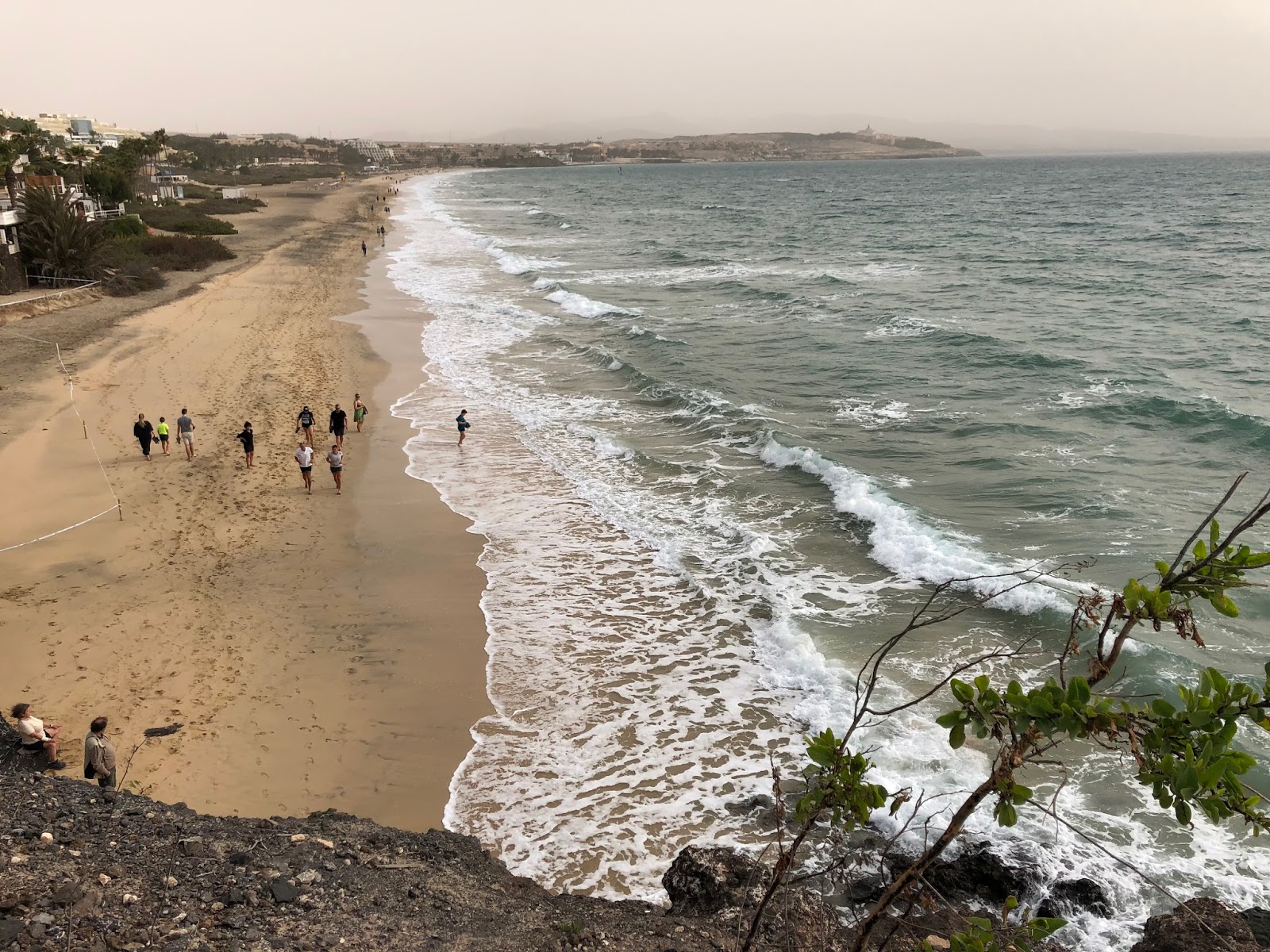 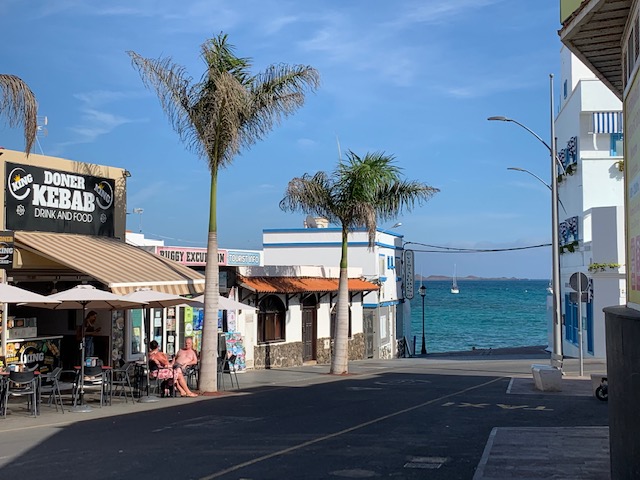 We were there in February (2017) so the experience is very fresh. The temperature was between 21-28°C, and though it was breezy practically everywhere, that never bothered us. During the first three days there were occasional showers, but only for about five or ten minutes. In shallower places the water temperature was also pleasant (e.g. El Cotilllo and Costa Calma – though I’d say the temperature difference the two could have been as much as 5-6°C, to the advantage of the more southerly Costa Calma.

We sought and found accommodation (Airbnb) in the island’s capital, Puerto del Rosario, because we wanted to see everything the island had to offer (or at least a lot of it) and it seemed a natural point of departure. We weren’t wrong. 😊 We rented a car, so in practice we were able to travel anywhere.

The car hire cost us €97 for the whole week (a Fiat Qube, which comfortably fitted four adults and two large suitcases). There were no additional costs or fees, and after touring the whole island our fuel costs came to about €50. We filled up the car with 95, which cost less than €1 at the gas station with the hummingbird logo.

•    The sand dunes at Corralejo are unmissable, and despite the wind, it was wonderful to walk in the fine sand
•    We found some spectacular coastal areas beyond Costa Calma, but even before Jania, the sandy beach that runs almost the whole way between these two cities was very tempting
•    We were captivated by the crystal waters of El Cotillo Lagoon

•    It’s also worth taking a boat trip to the island of Los Lobos. The journey takes about fifteen minutes, and costs €15 for a return ticket (which you can buy on the boat). We spent about three hours there, including the time we spent climbing to the highest point on the island. It took about forty-five minutes going up, and less coming back down. The wind was stronger here, and sometimes it knocked me and my daughter off balance, but my sons felt it too 😊. Near the fishermen’s houses there is a beautiful, shallow lagoon, don’t miss it! 😊
•    In Antigua there is a small, intimate church, and the old town of Betancuria was also a real experience – we loved the atmosphere, and you can find a lot of small shops here, where we were able to do a bit of shopping.
•    The black sand at Ajuy is also unmissable. You can walk on it in bare feet, while some prefer flip flops, but personally I recommend closed shoes. At the end of the ‘walk’ there’s a little cave too. Don’t be alarmed, even elderly people can safely explore it.
•    In La Oliva you can find ‘La Casa de los Coroneles’, the former residence of the colonels, who oversaw the island. We came across a lot of squirrels here 😊
•    Salines del Carmen – we were a little disappointed, because we didn’t see the whale skeleton which was our reason for going there in the first place. Visiting the salt museum (€5 per person) was interesting… but missing the whale skeleton. It was some compensation when, on the beach near Puerto del Rosario, we later came across an animal skeleton. True, it was a much smaller skeleton, but at least it was there 😊
•    The Oasis Park (€33 per person) can be found in La Lajita. It must be fun for small children, but for our teenagers the best bit was feeding the giraffes and going on a camel ride (€12 per person)
•    You can reach Cofete along a dirt track (if I remember correctly it’s about 17km long). Don’t be fooled: at the beginning of the road there’s a small car park with a sign which suggests you can’t go any further by car. Maybe 😊 In one or two places we had to pay more attention on account of the narrow road and oncoming traffic, but the spectacular view when you arrive is more than worth it – ‘coffee’ brown mountains run down to the sand, and the magical blue-green waves… There are a lot of jellyfish in the surrounding sea, and they looked a bit like washing-powder capsules (my daughter thought that’s what they were at first, and wondered how on earth they’d got there…)

We shopped in supermarkets several times, mainly in Mercadona and HiperDino. We preferred Mercadona, which seemed to have a wider selection. Compared to Central Europe, the prices here often seemed lower. One or two examples: An eight-liter bottle of mineral water cost €0.84, a 1l bottle of pure orange juice cost €0.60, three baguettes came to €1, a giant pizza was €3, and we were guilty of gorging ourselves on the irresistible little gum sweets they sell for less than €1 a packet 😊. A meal in a restaurant costs about €10-15 per person, and the portions are generous for both lunch and dinner. The seafood dishes were delicious, and we were never disappointed. As everywhere, it’s important to look for where the locals go, as it’s sure to be the place with good, fresh food 😊

All in all, I recommend the island. We’d go back any time. It’s extremely livable 😊 Absolutely not a disappointment – perhaps it was even greener than we had been expecting. (2017)

“I’d recommend the southern part of the island, as the beaches there are more attractive, and the sea is spectacularly transparent. I think the beaches on Fuerteventura are prettier than on Tenerife. Surfers also like the island.
The interior of Fuerteventura is comparatively unrewarding for nature-lovers: rather arid and barren.

We stayed in the Jandia area, where, besides the tranquility, there was some quiet, restrained life (bars and restaurants). The beach was nice there too.
The most beautiful beach on the island is at Playa de los Lagos, to the north of El Cotillo. The azure waters are spellbinding, and the dazzling white sands are unbeatable! A must-see, in other words.” (P. k. 2016) 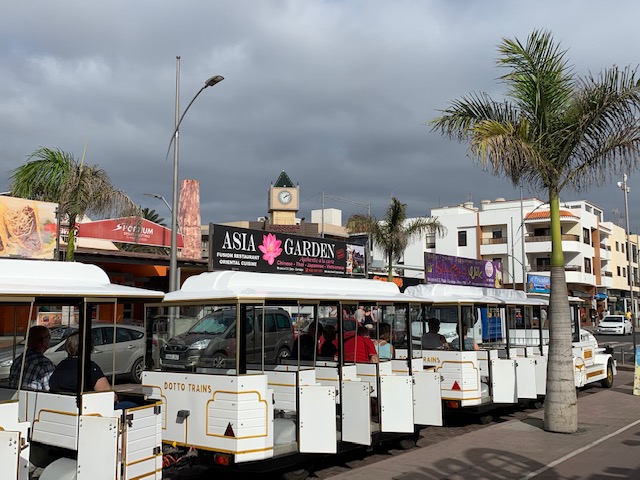 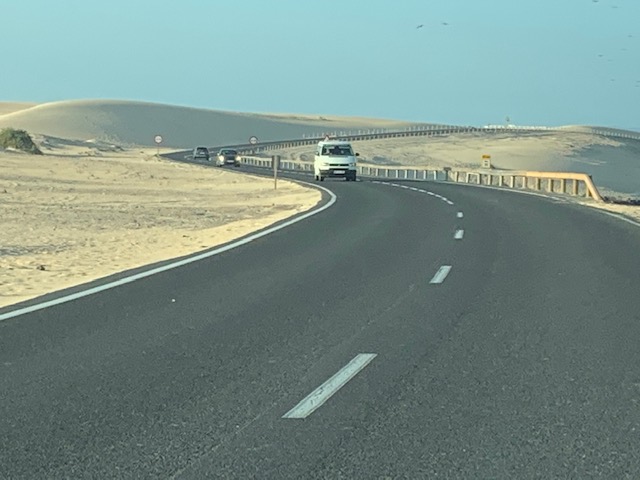 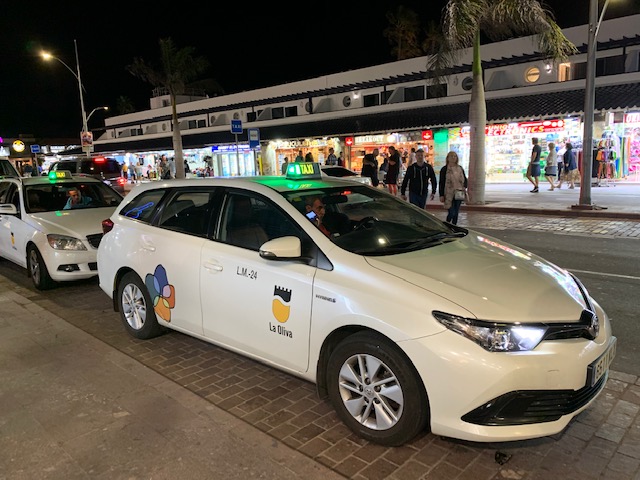 “The menus are essentially the same everywhere, and even the order of the dishes is often identical. We could order crabs, mussels, fish, and of could that quintessential Spanish dish, paella. We were surprised that each dish was cooked the same in every restaurant, but at least, in accordance with local custom, patrons waiting for their meals are given two freshly baked bread rolls, along with a delicious garlic and chili dip. At first we weren’t sure what to do with it – the other foreign guests around us didn’t touch their little rolls.

The best policy, however, is to abandon all shyness, and simply tuck in. That’s what we did, and it turned out to be a great idea! The house wine is excellent, though they were confused when we tried to order a spritzer, and we couldn’t explain it so they understood. In the end, we bought some white wine and sparkling water in a HiperDino (a convenience store) and went out to the empty oceanfront. There, under the starry sky, we delved into the indecipherable secrets of the universe, against the gentle splash of waves. It is such moments that make life worth living!”

The biggest supermarkets in Fuerteventura are Mercadona, Lidl, Hiperdino, and Spar. The best prices are at Lidl, Mercadona, and the larger Hiperdinos. The small Hiperdino express supermarkets are aimed at tourists and are quite expensive. 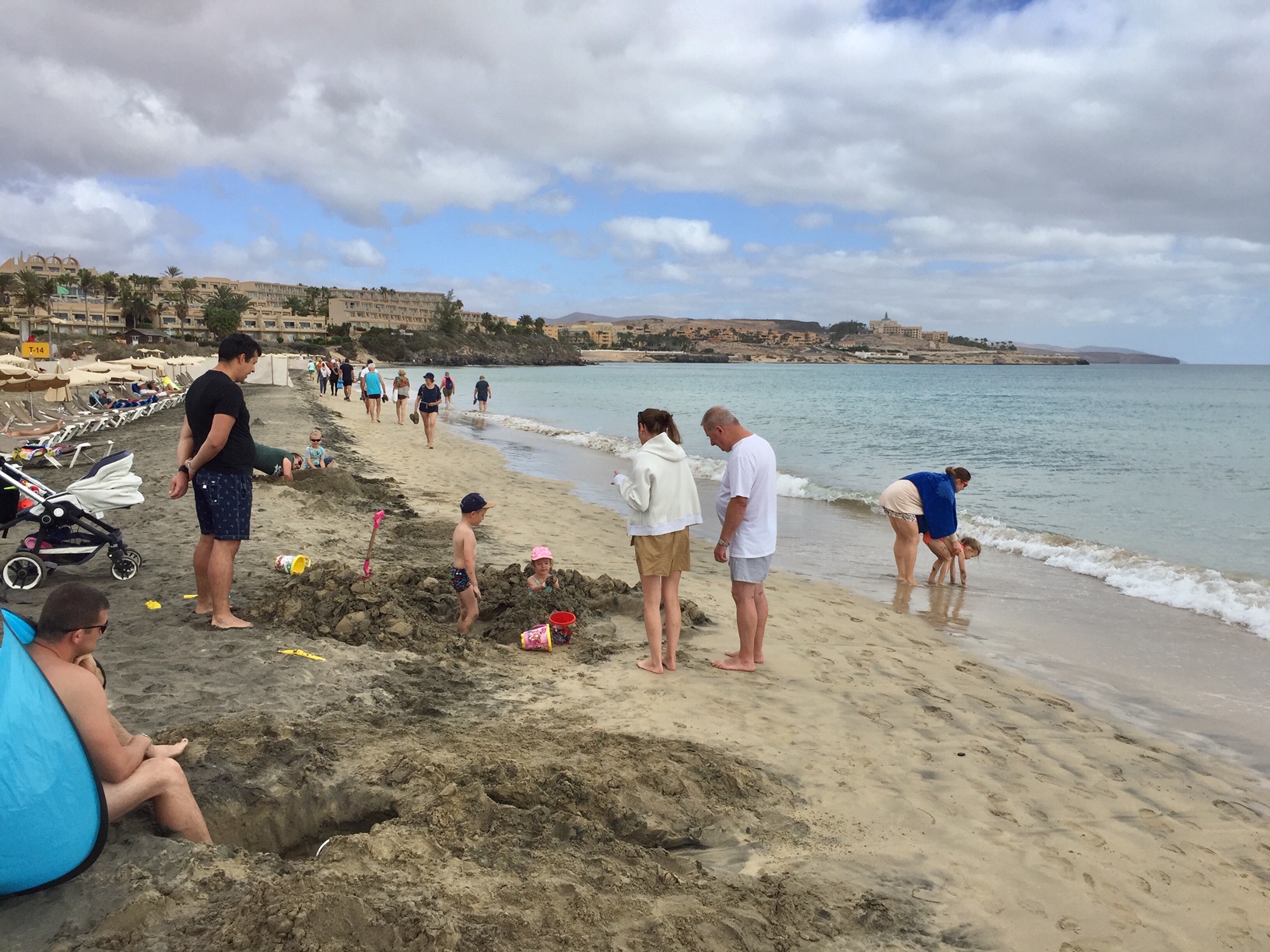 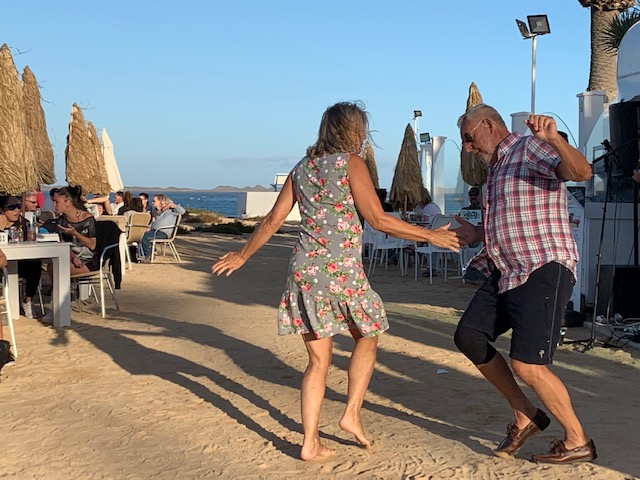 There are sharks in the waters around the islands, but the only sharks you may come close, are Angel Sharks, and they are docile. Don’t worry about seeing sharks when swimming, no others than this harmless specie. Anyway, there is a 0.1% chance of seeing them.

the catch of the day - kr photo 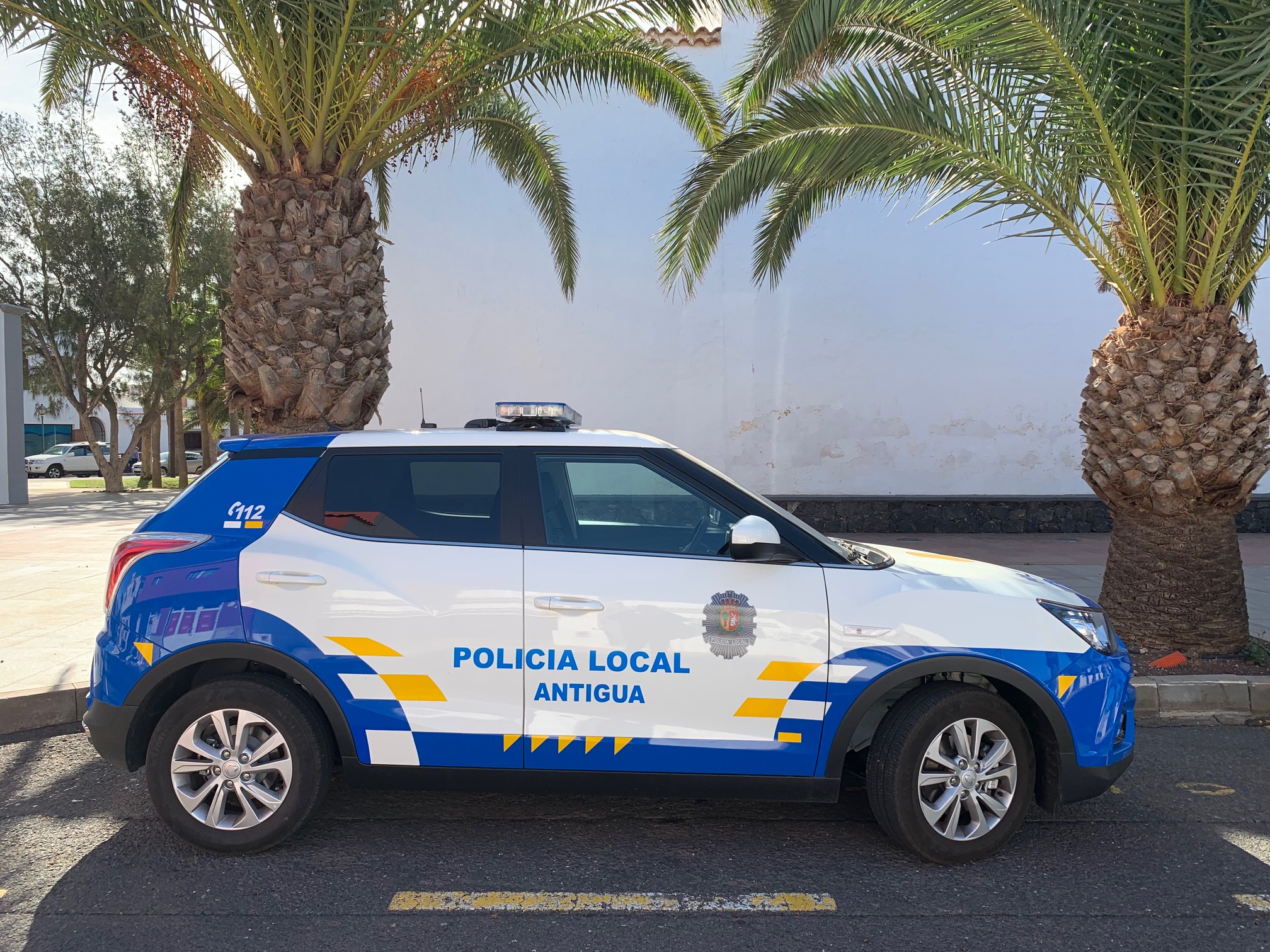 Fuerteventura is one of the Canary Islands located in the Atlantic Ocean, off the southern coast of Morocco, North Africa. Lanzarote island is the closest neighbor, north of Fuerteventura, while Gran Canaria is in the southwest direction. The shortest distance (by the sea) between Fuerteventura and Morocco is 873 km (542 mi). 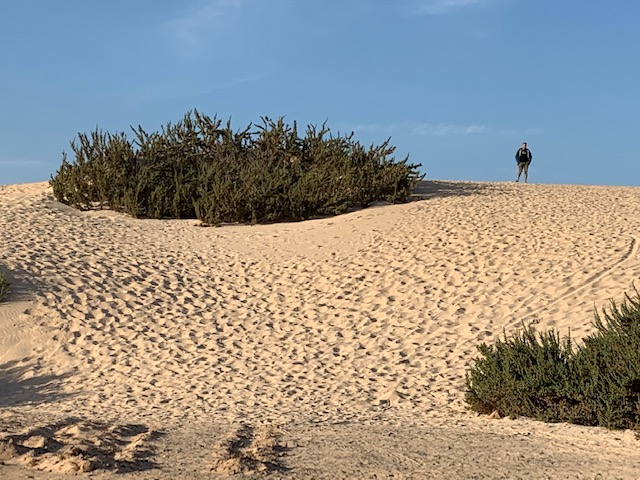 Fuerteventura means ,,strong wind" after all 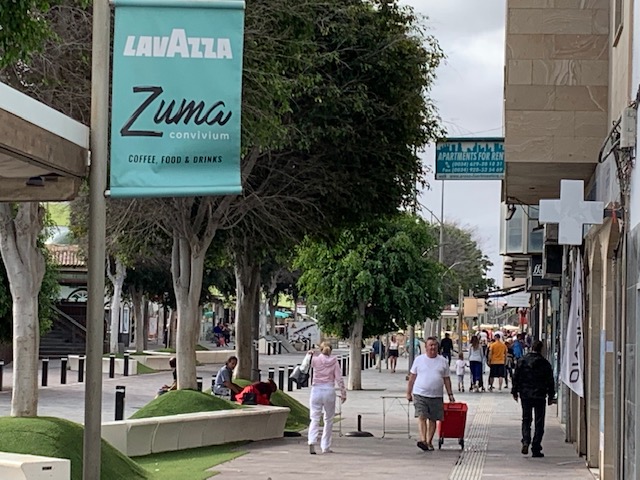 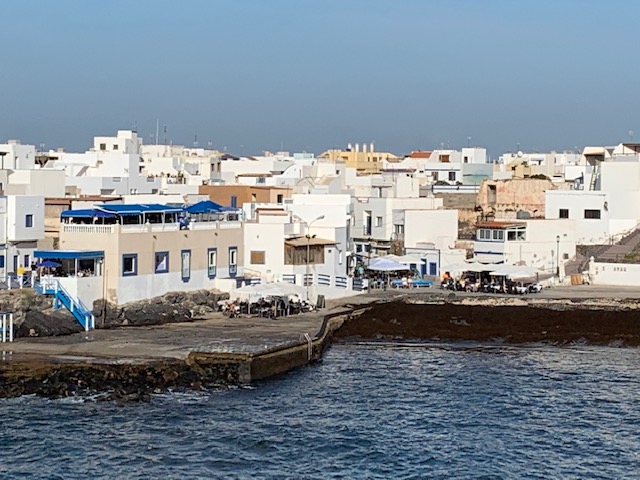 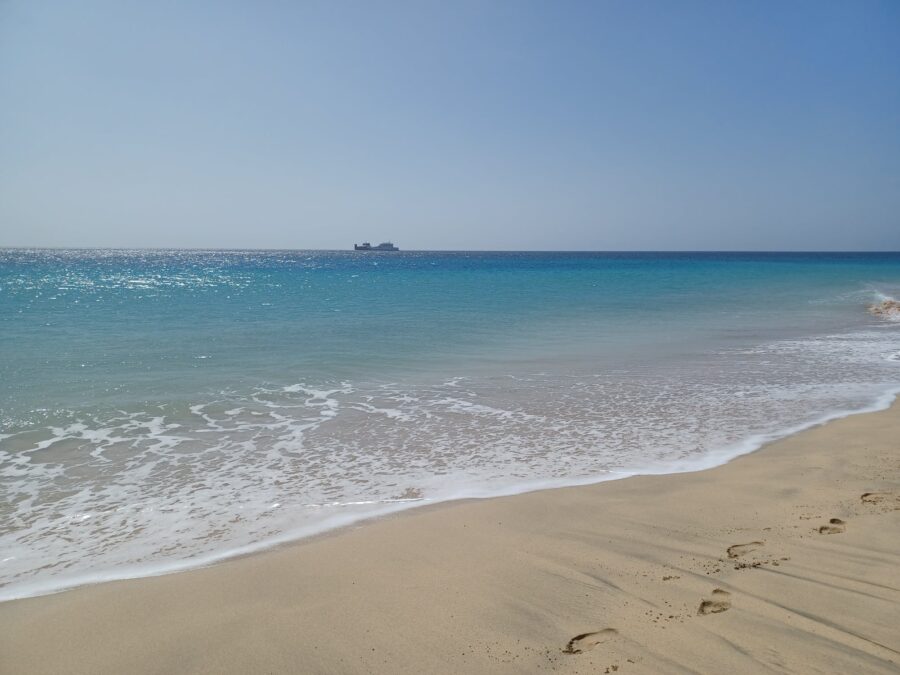 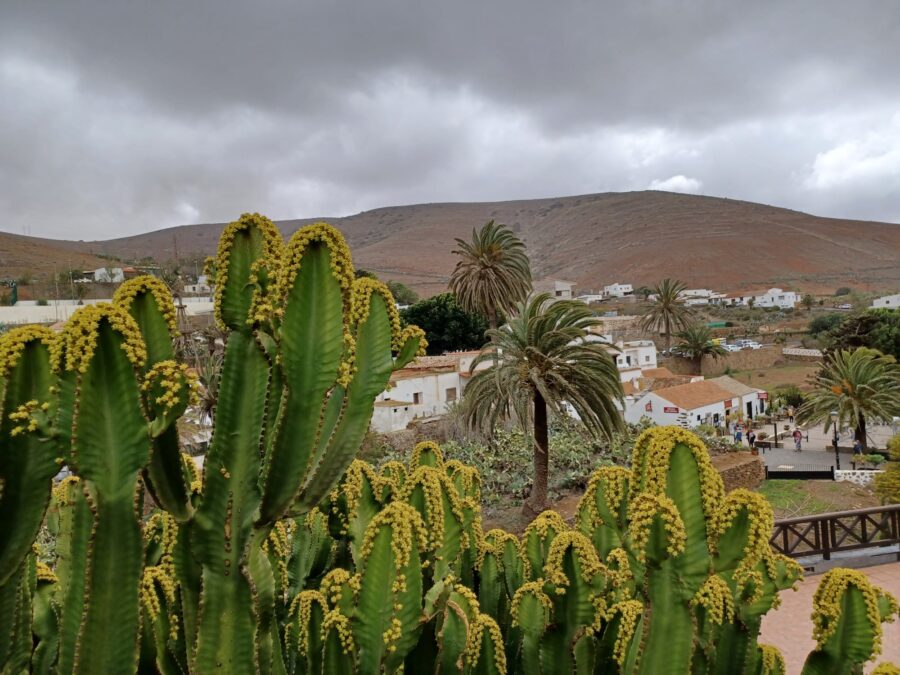 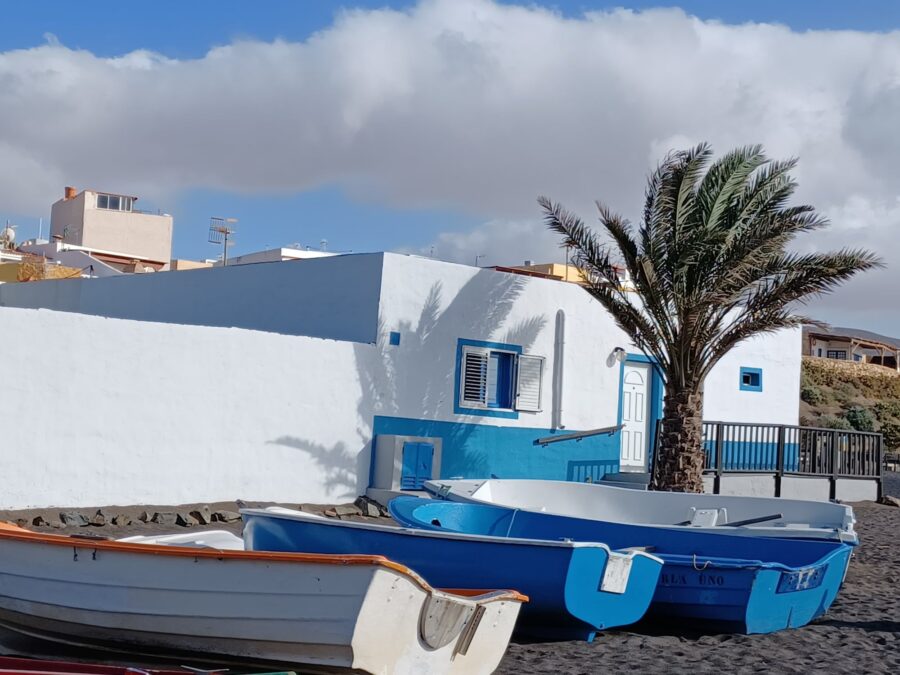