4. The international port and its surroundings are spectacular, the atmosphere in Fischmarkt, the refreshing sea air

7. Locals are kind, tolerant, helpful – you can feel that they appreciate their own city

9. Taking a lakeside stroll at Aussenalster

10. Speicherstadt, the “German Venice”, is a truly unique district

11. The relaxed Schanze and Karolinien neighborhoods

2. Hamburg was almost completely destroyed in the Second World War so its historical roots are painfully missing, making it somehow lack in authenticity, plus some of its suburbs are gloomy

3. Many beggars, homeless and drunken people on the streets

4. Spending 20 minutes in the red light district is more than enough for anyone who is not there to ,,counsume"

5. The impressions of the tourists are very varied - many do not like Hamburg

6. More expensive than many other German cities

7. Flat topography - no mountains, no hills

8. Too many construction sites, with their accompanying noises

9. Hamburghas no outstanding tourist sights, except for the port area

10. Drug dealers and other shady guys in some areas 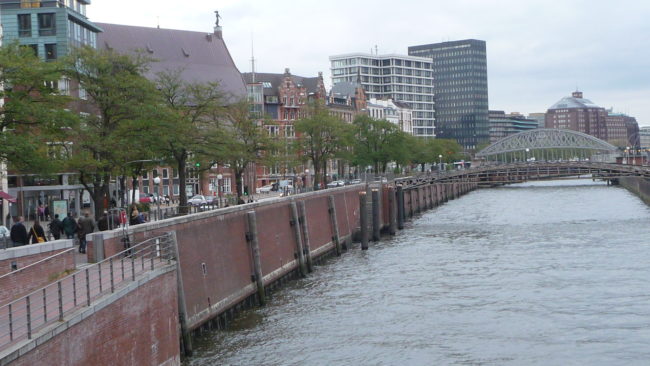 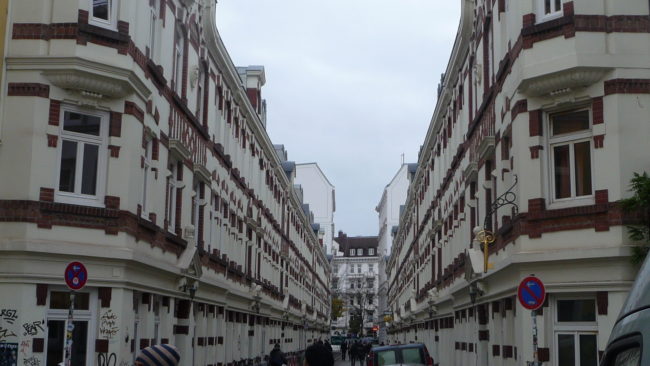 “Hamburg was a very pleasant experience for me, even though it was my first visit. I spent a lot of time in the city. My first impression was that it was that it seemed very quiet, and I was sure it was the sort of place where nothing ever happens. How wrong I was!

First there is the DOM, a travelling theme part that comes to the city center twice a year, and stays for a month. In terms of atmosphere, it’s a bit like Oktoberfest in Munich. In fact, there’s a parade of colorful festivals one after the other, all year round.

The city also has quite a noteworthy historic past, and the citizens of Hamburg (or Hamburgers, I suppose) are proud of it. As a major trading port and important center of the historic Hanseatic merchant alliance, Hamburg remains one of the richest cities in Germany, and a prestigious place to live.

One of my favorite districts is the Speicherstadt, which was once a merchant’s mecca. All goods were shipped through here, and this was where they decided the prices before sending them out across Europe. These days the old merchant houses have given way to office buildings, conference centers and museums. This is also where you’ll find the world’s largest model railway. It’s on three levels, and covers 5000m3! It’s a funny thing, but adults are harder to drag away from it than children!

In the part of the city which is bisected by canals, the easiest way to see the beautiful old brick buildings is by taking a boat trip. You can board one of these by travelling first to the Landungsbrücken S-bahn station, and from there heading not towards the Speicherstadt, but rather towards the shipbuilding docks. It’s interesting to see how they can cut a luxury cruise liner in half, insert a new section, then weld the whole thing back together again.

Hamburg’s ‘new kid on the block’ is HafenCity, which has been built on the part of the Speicherstadt that was obliterated during World War Two. This district is characterized by very modern, futuristic architecture. This may be the best symbol of Hamburg: a harmonious combination of the old and the new. On a pleasant Sunday afternoon it’s one of the best places to stroll, take pictures and relax by the many parks, promenades and piers.

Hamburg is now also one of Europe’s premier destinations for musicals. High-end productions of such famous shows as The Lion Kind and Tarzan are staged here, and the specially constructed theater can be reached from one of the shipbuilding docks, on stylized, lion-shaped boats. Hamburg also has a red-light district, similar to that of Amsterdam, called the Reeperbahn. Here everything is focused on entertainment, from theaters, bars and restaurants to discos and night clubs.

“One of my favorite parts of Hamburg is the Speicherstadt. This district is divided by numerous canals, each of which is lined by red-brick warehouses of the city’s merchants. This network of warehouses was once among the largest in the world, and goods from every corner of the world arrived here by ship, before being transported on to destinations across Europe. Today it is an architectural heritage site, and the warehouses have been transformed into galleries, offices, banks and luxury apartments. The HafenCity district was constructed on that part of the Speicherstadt which was destroyed during the Second World War. The modern architecture of this district, combined with the more historic appearance of the rest of the Speicherstadt, gives to this part of the city a unique atmosphere.” (2018)

“After unpacking our things, and despite the driving rain, we set off to explore the district. The rain didn’t bother us – we’re already used to the fact that in Hamburg, summer autumn or winter, the streets are almost always wet.

Hamburg is the most expensive city in Germany, and is home to the largest number of German millionaires. The shops are elegant, and the streets are clean. Unfortunately, certain ‘bad’ habits have begun to encroach. There are plenty of ‘disorderly’ young people, including many Arabs and Africans, who neither respect nor follow the ‘tüchtig’ (upstanding) habits of the city’s older inhabitants. The Germans themselves seem to be losing their former character, particularly in, for instance, their driving style. Germany used to be famous for following the rules of the road, but you can forget all about that, and cyclists are as willing as drivers to break the rules. Aggressive, selfish, horn-honking drivers, and no courtesy – and that goes for the native Germans as much as for the many rich Arab visitors.”

Do not buy a public transport ticket per person when you are traveling with companions. They have got an attractive group travel offer in Hamburg.  After 9 am, you can buy a group ticket that allows five (!) people to travel on that only ticket.

A three-course meal for 2 people in a mid-range restaurant: 50 Euro 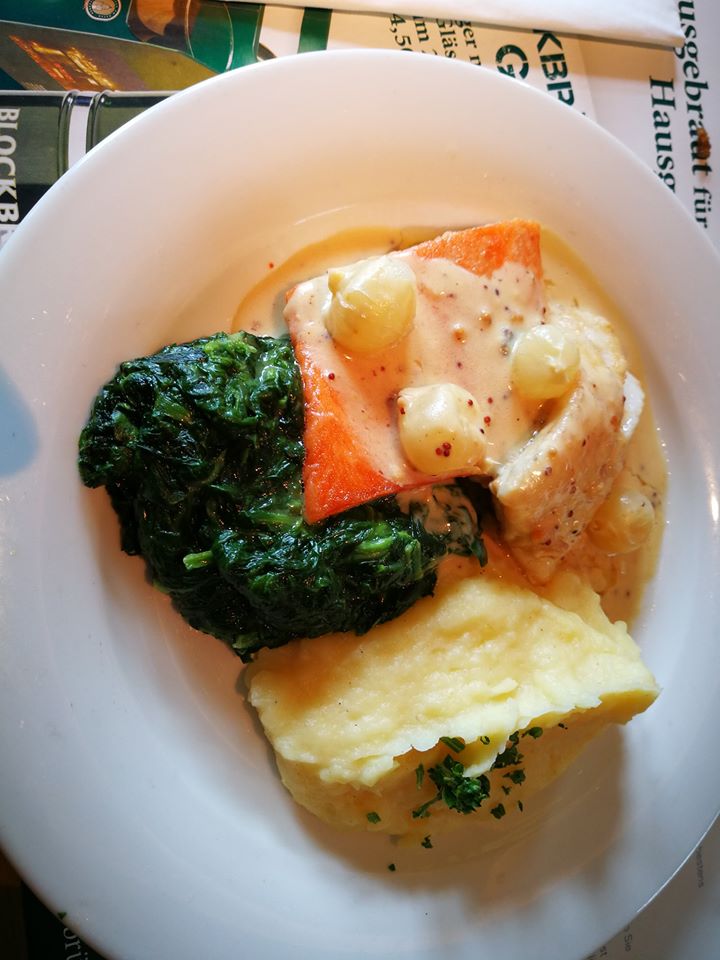 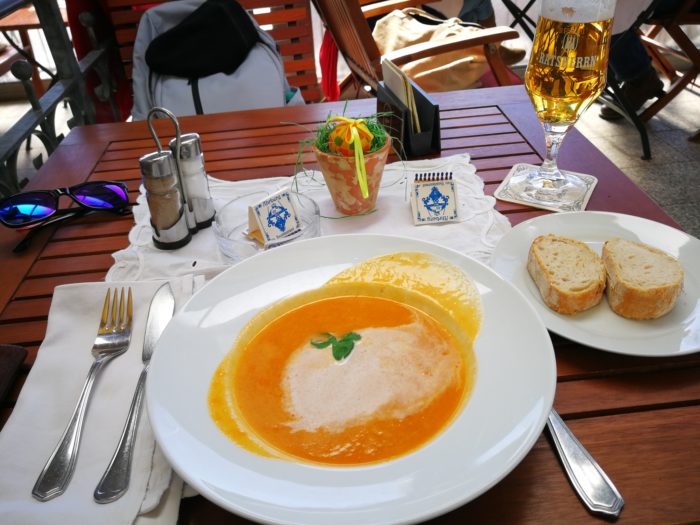 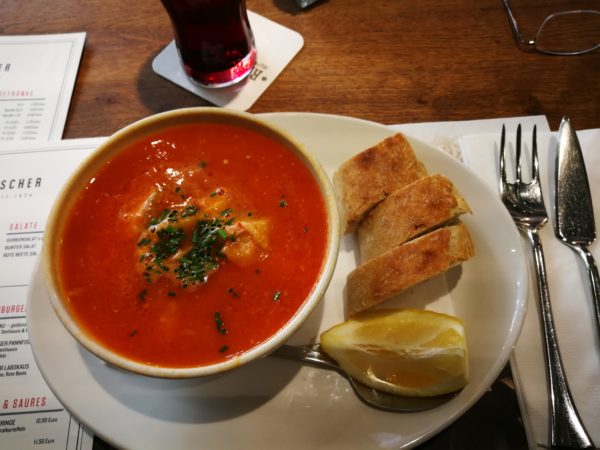 The oldest of all the shopping streets in Hamburg is Monckebergstrasse, with more than hundred shops. Three other streets are full of luxury boutiques: Neuer Wall, Grosse Bleichen, and Jungfernstieg. Das Stilwerk is an fancy shopping mall, a remarkable spot to buy or look at interior furnishings.

Nowadays, Alster Arcade is one of Hamburg's trendiest shopping area,  with a look inspired by Venetian architecture.  It is so atmospheric in the evening lights.  Luxury stores line up one after the other. It's worth doing some window shopping even if the price level may frighten you.

Avoid Stralsunder Straße, going off the Hansplatz towards the Turkish quarter around Steindamm. About 40% of the most severe crimes in Hamburg are committed here despite the permanent presence of the police. 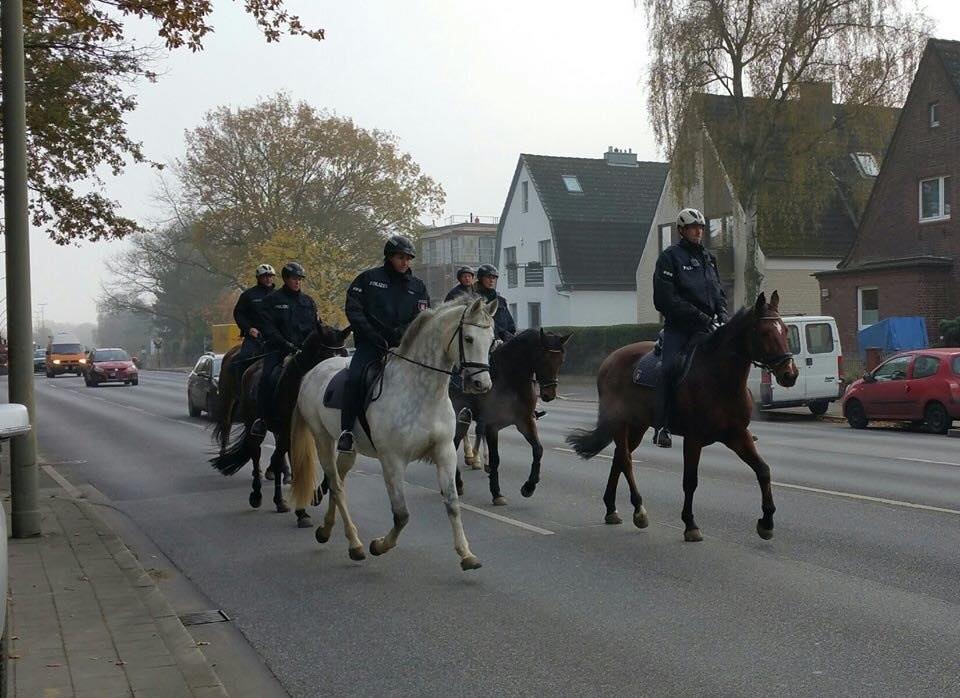 Hamburg - mounted police in a suburb 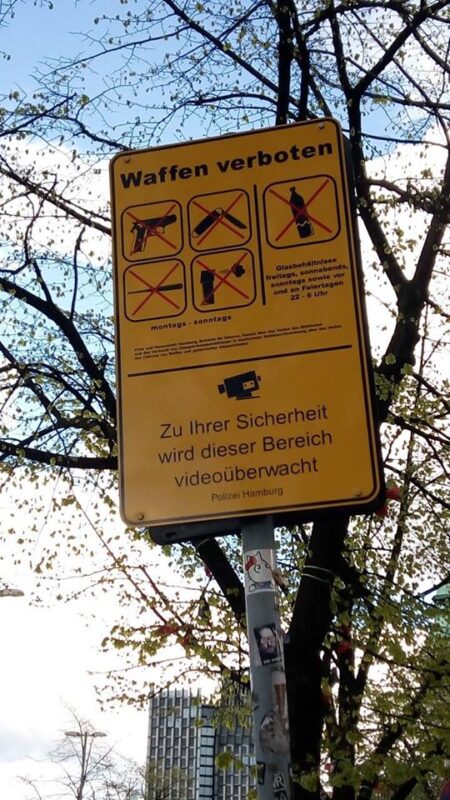 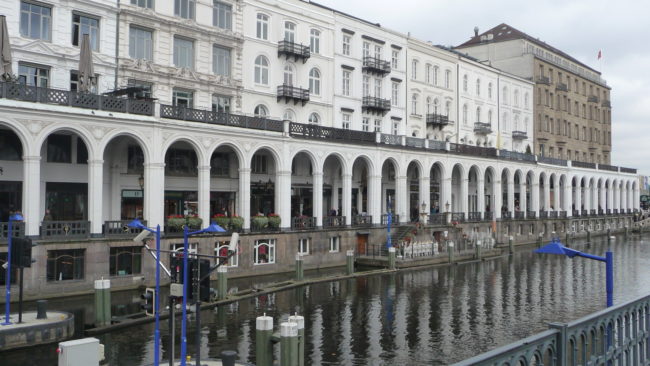 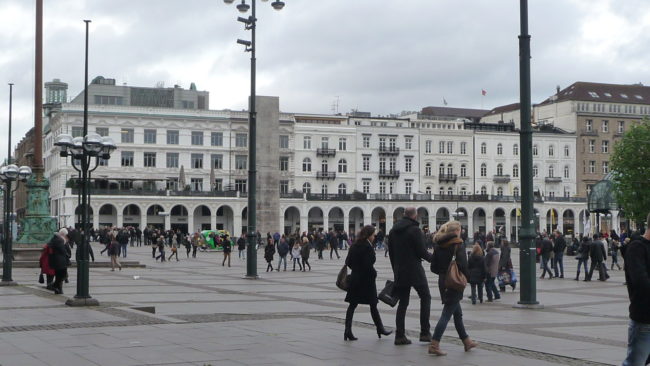 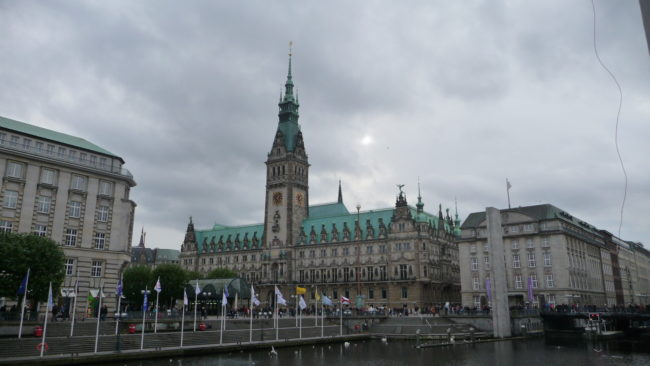 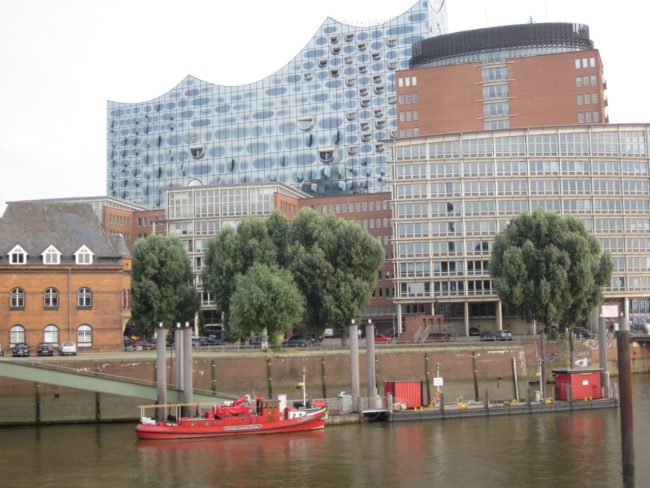 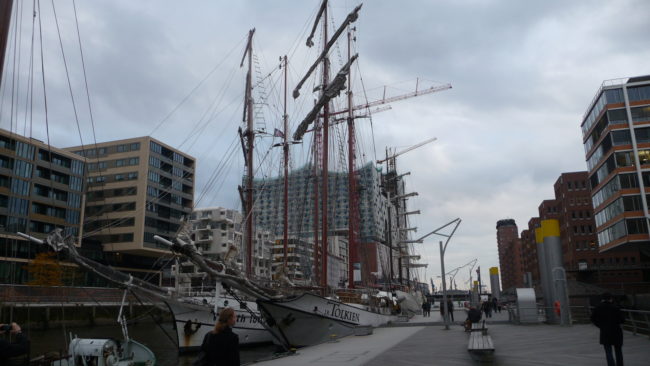 Hamburg is in the North of Germany,

Locals are proud of Hamburg's status as a "city state" and a "Free and Hanseatic Town."

About 70% of Hamburg inhabitants are German citizens. 27% have some migrant background (including about 100,000 Turks from much earlier arrivals) .

Speicherstadt and Kontorhaus District with Chilehaus' is on the UNESCO World Heritage List.

“Though Ringo Starr, the drummer, only joined the Beatles towards the end of their Hamburg period, this era, from August 1960 to December 1962, was a formative one for the band, in that they acquired experience in playing together on a stage, and matured as musicians. These Hamburg years are synonymous with legendary performances, and also certain ‘scandalous’ moments, such as Lennon in a pair of underpants, with a toilet seat around his neck, their acquaintance with various types of drugs, and much more. Today, both a ‘Beatles-Platz’ and a museum commemorate this legendary period. 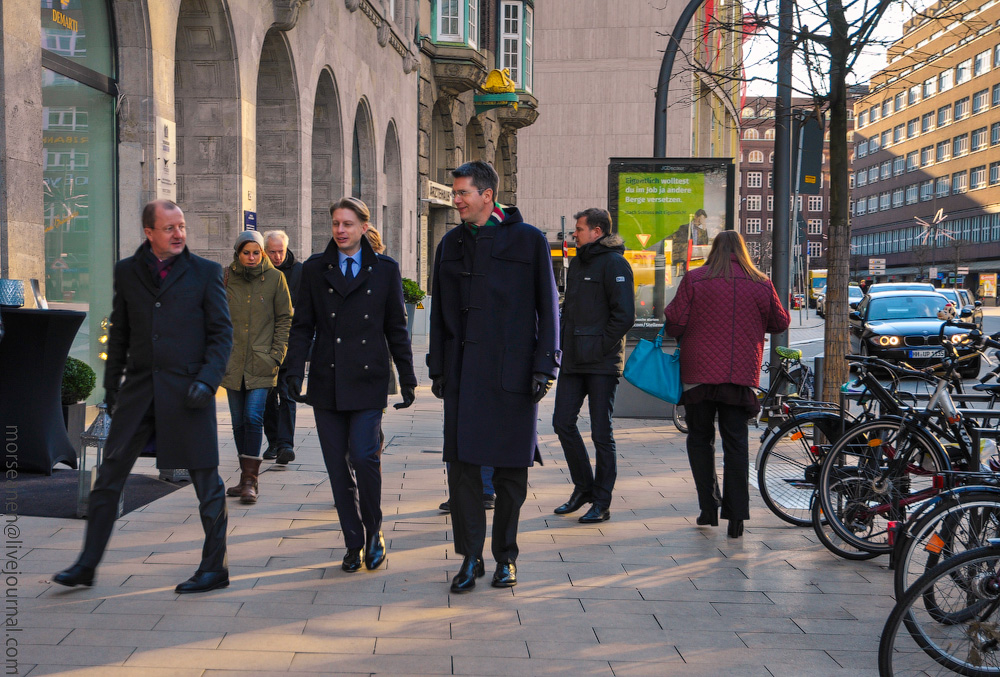 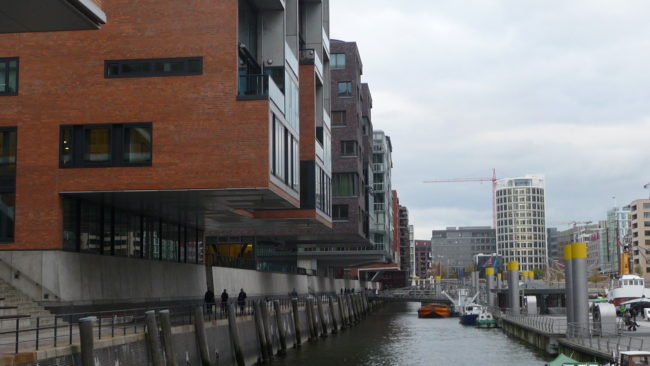 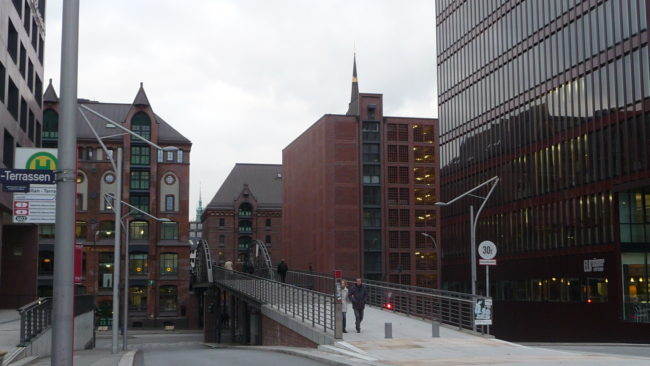 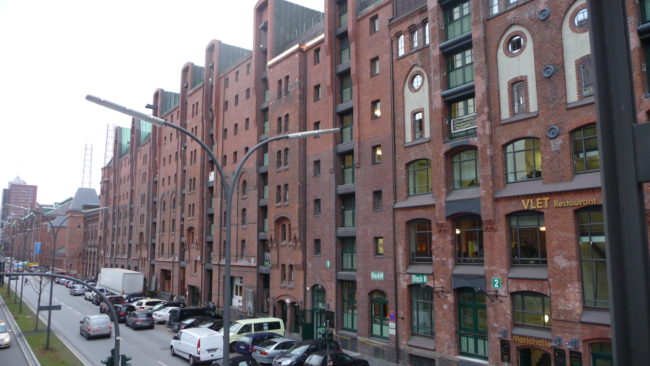 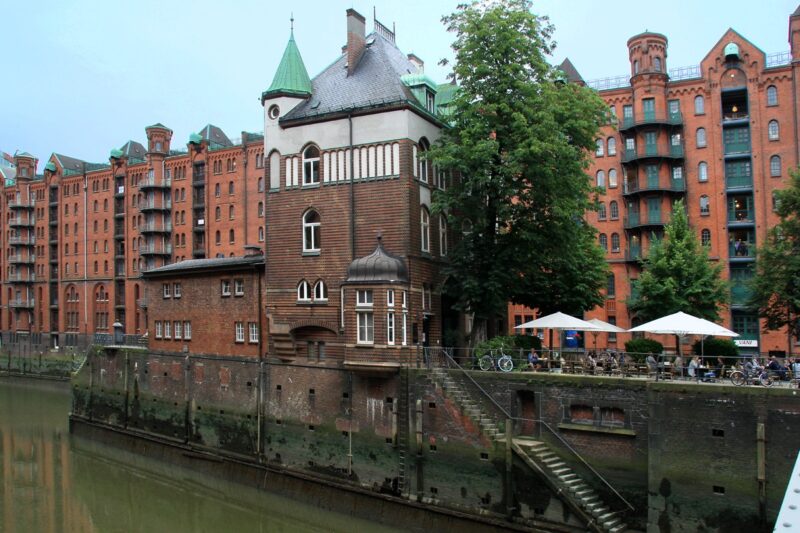 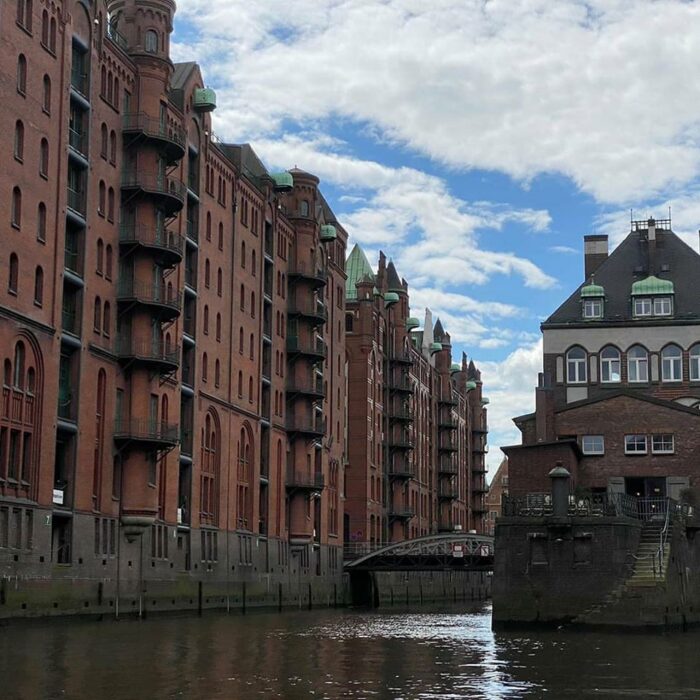 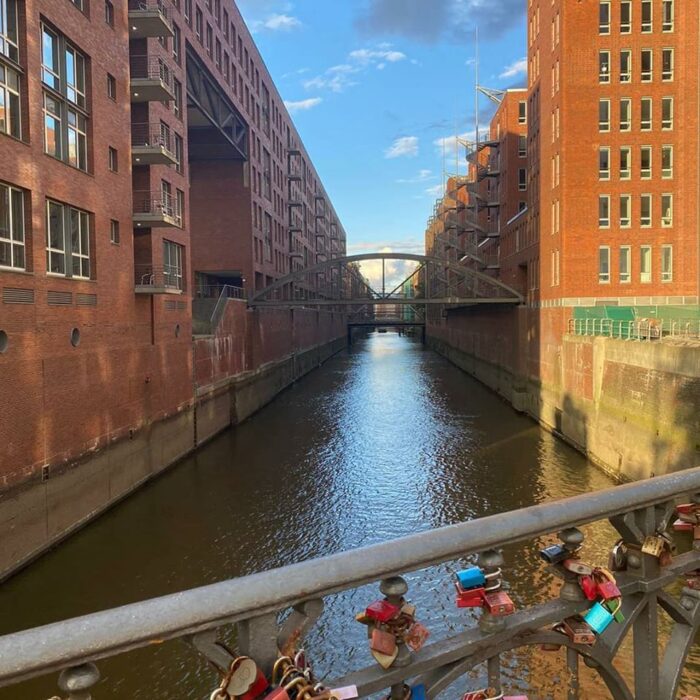 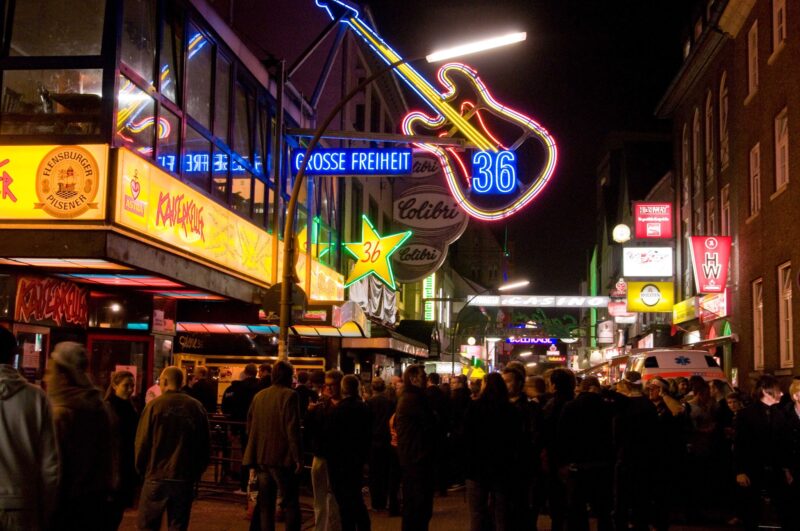 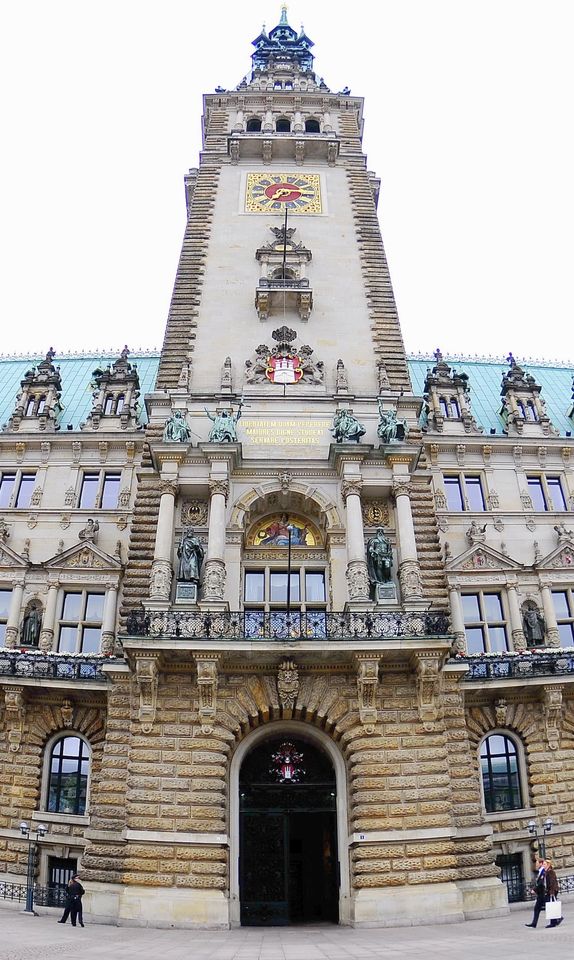