1.    Berlin has changed a lot over the last fifteen years – for me the coolest city in Europe
2.    I find Germans very intelligent, reliable and accurate
3.    Hamburg was a very positive surprise for us – thumbs up!
4.    Biking in Munich was very pleasant
5.    The Old Town of Heidelberg
6.    Cologne Cathedral – worth climbing to the very top!
7.    The Zwinger in Dresden
8.    The Romantic Road between Würzburg and Füssen
9.    Small towns like Goslar, Quedlinburg, Dinkelsbühl, Mittenwald, and Rüdesheim
10.   The weekend markets in Düsseldorf and many other German cities
11.   Rothenburg ob der Tauber in Bavaria – a fairy-tale (except for the Chinese tourist groups)

1.    Some Germans are unfriendly towards tourists


2.    No speed limit on German highways scares me!


3.    Too many services are closed on Sundays


8.    Those migrants who are unwilling to adapt themselves to Germany’s basic social rules


9.    You see how much heritage Germany lost through Hitler and the Second World War


10.  Half-hour delay on the Düsseldorf - Cologne train – not what I expected from German railways!

11. Neuschwanstein Castle is wonderful, but the conditions of its visit are stressful, and too few rooms are allowed to see, no garden or park, somewhat kitschy 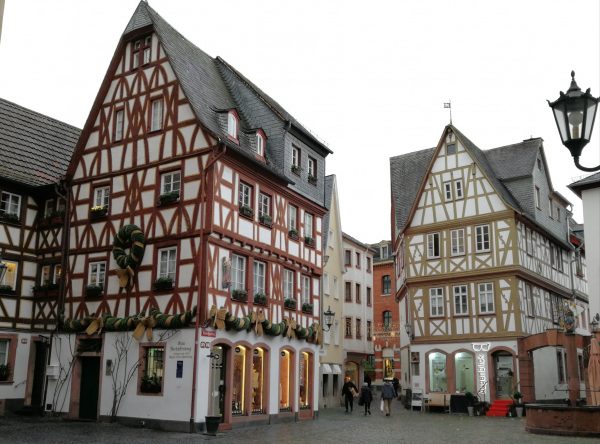 “It feels good to be a tourist in Germany. Service is reliable, public safety is good, almost all products are of a high standard, and the people are generally fair and sensible. The price-value ratio is excellent, though prices are of course still higher than in countries like Poland and Hungary. It’s quite an educational experience to spend some time in a really successful, cultivated country. We visited a lot of places in Germany, but there are still a huge number of cities and regions still waiting to be crossed off our wish list. Every German city we visited was a pleasant surprise: Berlin was great, Hamburg was surprisingly appealing, and while we weren’t quite so won over by Munich or Frankfurt, both were still interesting. Heidelberg is glorious.” (Aji, 2015)

Many Autobahn (highway) sections have no speed limit; some parts do have. Watch out!

“There’s neither rhyme nor reason to the big traffic intersections where the oncoming traffic is given a green light at the same time as you. Not a problem if you’re turning right, or else going straight, but if you’re turning left, forget it – you might as well turn back.  In the best case, five or six cars might get through each change of lights. In the meantime, though, they’re stuck in the middle of the road, and can’t go anywhere until there is no more oncoming traffic (or the lights have turned red).
Fortunately, a little time is given at this point. Of course, if the thing ahead of you is an articulated bus, it’s the only thing that will be turning on this change of lights…”

“I don’t think anywhere on the planet uses more ‘don’t stop’ signs than the Germans. A small white arrow indicates whether this prohibition applies before, after, or before and after the sign. There are streets where a don’t stop sign has been put up after every single side road. It seems excessive to me, but I suppose at least there’s some logic to it. The fact is, though, anywhere this sign is absent, they take it as a license to park, and leave their cars in any old place, with no consideration for traffic. I have seen numerous instances of streets designated two-way, and which are on bus routes, but where people have parked on both sides of the street, thus narrowing it to no wider than a single bus…”

“German drivers are real sticklers for rules – almost scarily so. They don’t accelerate when they see the yellow light, they stop to let buses out, and they don’t park up ‘just for ten minutes’ outside marked entrances. It is practically inconceivable for a German to relinquish priority when by rights it is his, since the rules on the matter are so clear and straightforward, and by the same token, anyone volunteering to give up priority when he has it is greeted with deep suspicion.

If I slow down at a junction, and indicate to the driver of the waiting car that he can go, he pulls out very slowly and grudgingly. Still, unofficial signs don’t get nearly the same level of respect. Only once were we able to park in the space reserved for families at the shopping center – the other times it was occupied by smart cars, pick-ups, twin-seater roadsters etc. Naturally, since there’s nothing in the official highway code about family parking spaces, and anyway, they have families too, somewhere.”

“Germany has Europe’s largest population of vegetarians and vegans. This means that the range of such food is much more extensive than elsewhere in Europe, especially in the countries east of Germany. Here you don’t need to explain the difference between vegan and vegetarian, and the waiter won’t raise an eyebrow if I order pizza without cheese, or bug his eyes at me as though I was some sort of alien for eating it like this. Most people are also clear about the reasons for this lifestyle choice, or at least a large proportion of them – and here comes the ‘but’: They are all aware of the environmental damage etc. caused by meat eating, but nobody wants to hear about it, or feel guilty about it. So if I dare say I’d like vegan food, someone’s sure to attack me with some stupid insult, or else give some pompous speech about everyone being entitled to eat whatever they choose. All the same, in the same situation back home I’d still be explaining what vegan even means.” (2017)

Germany - Reward your dog with diversity: Let him/her poop in front of your own door! - m.v. photo

“When you speak to a German and say in the most polite possible form – so polite that a native German would never use it – that your German is far from perfect, and you’d appreciate it if he spoke a little more slowly and simply, he will smile sympathetically and say no problem at all, then carry on exactly as before. Nightmare :D”

In pure geographical terms, Germany is a Central European country, but it is mostly labeled as Western European.

There is no speed limit on 70% of the German highways. However, about one third of car drivers never drive faster than 150 km/h (93mp/h) even on these highway sections.

Population: 83,7 million (2020) – 25,5% of the population has some sort of immigrant background, but – surprisingly - half of these are actually ethnic Germans coming from other countries (2019). Close to 3 million Turks live in Germany, half of them born in Germany (2018).

Germany is the most populous country of the European Union.

Currency: Euro – almost 2 decades after the introduction of the Euro, about 50% of Germans (especially on the former West German side) still tend to count inwardly in the old German Mark when the amount is significant.

If you look at a satellite image taken of Germany at night, you can clearly see where East and West Germany used to be. That’s because the majority of the streetlights on each side were installed before the wall came down, and appear in a different color due to the bulbs’ chemical makeup.

“Here in Germany:
Germans sniff. No matter if you have a handkerchief – why blow a booger out when you can sniff it into your mouth and taste it?
If I hear a snatch of conversation in my native language (Hungarian) it’s quite likely to be someone complaining about the sniffing :D
Asians, Middle-Easterners and Indians chew and talk with their mouths open. There must be exceptions, so please let me know when you find them.
There’s nobody quite like Asians for shoving and elbowing, and generally being impolite in a crowd.
Sub-Saharan Africans always talk at maximum volume on the train, so everyone can hear what a beautiful language Swahili is. Personally, it reminds me of the bubbling sound a person makes when shoved underwater unexpectedly, but I suppose that’s my problem…
Middle-Easterners, meanwhile shout at one another across crowded public transport, in a manner that sounds like a benefit concert for laryngeal cancer victims, without the music: a lot of guttural hawking.
In general, I would say non-Europeans, in their bodily hygiene and eating habits, fall so far outside the European norm that it becomes downright unpleasant.” 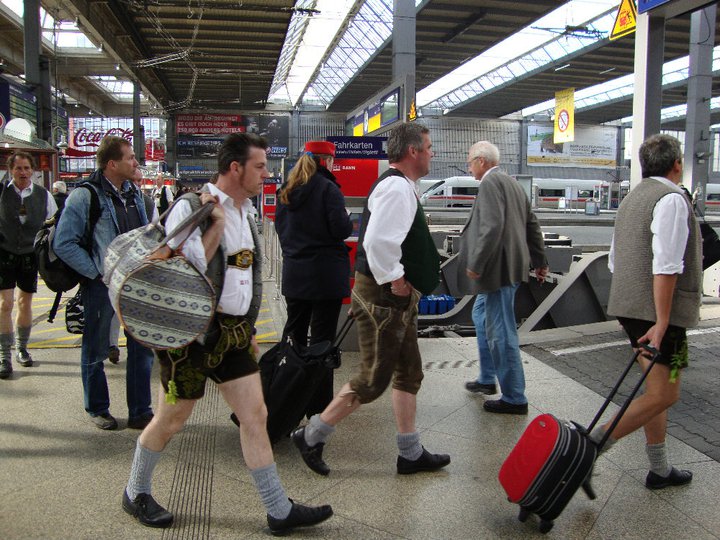 1. Do not raise your voice when asking for the menu or the bill from staff in the restaurants and cafes.

3. When traveling in public transport, offer your seat to pregnant women, disabled persons, or older people. Germans almost always do so.

4. Keep a secure distance from a large bunch of loud, boozed-up guys.

5. Germans are usually loud during a football (soccer) match; they otherwise prefer calm. Try not to be loud at the place you are.

6. Germans are friendly and open-minded, but they usually do not engage in small talk and therefore, sometimes come across as cold. That is simply the German behavior.

7. Germans hardly appreciate being addressed directly in a foreign language, as if it were obvious that they must speak it. But they will be happy to find their smallest memory of English to help you, if you take the trouble to ask them in German: "Entschuldigung, sprechen Sie Englisch?" (Excuse me, do you speak English?)

8. In Germany, it is customary to shake hands when meeting (even if your counterpart is a woman).

9. It is not customary for the Germans to bother anyone after 21:00 (for phone calls and visits) - this is considered indecent. But on weekdays, you can safely call from 7:00 in the morning, because in Germany the working day starts early.

10. You better not start a conversation about legal and illegal migration problems, since this sensitive, divisive issue in the country.

11. In Germany, it is not customary to tell any jokes about Nazi times.

12. It’s risky to joke with the cops because they can easily take you seriously.