1. It has an atmosphere similar to my second-favorite Mexican city, Oaxaca – it’s pretty, with one or two-story buildings, narrow streets and many fascinating churches. The climate is pleasant and there’s lots of good food
2. A wide range of modern cafes on the three main pedestrian streets (and a range of prices)
3. The view from the hilltop church of San Cristóbal in the early evening, and from the church of Guadelupe, which can be reached up a long flight of steps
4.The Spanish colonial buildings illuminated in the evening
5. A highlight! The gorgeous church of San Juan Chamula, not far from the city. The spectacle of locals praying by the light of hundreds of candles was unforgettable
6. A trip to Sumidero Canyon
7. The small exhibition on Maya textiles (Centro de Textiles del Mundo Maya)
8. Miramar Lagoon, amid beautiful, rolling green hills
9. Totally safe – we didn’t even see any strange-looking characters
10. The Native Americans in the town have arrestingly interesting, characterful faces

1. In a local bar I was finally persuaded to try an agave-based alcoholic drink called mezcal – it was absolutely foul
2. The sight of a bored beggar children from nearby villages, brought here by local hawkers
3. In the offices of local tour operators you usually can’t pay by card, and when you can, it comes with a 16% surcharge.
4. The thin air at this altitude may leave you a bit dizzy at times during the first day (less so if you’ve come from Mexico City)
5. The horribly cramped, claustrophobic bazaar of the Iglesia de Santo Domingo.

6. Though there’s a vast range of restaurant and café options (and different atmospheres) we never had a truly great meal and the service was often quite inept
7. The cathedral was closed when the a sign said it would be open, and it was impossible to find any information about when it would actually open (in the end, we never saw the interior)

8. We always had to watch where we were putting our feet, because the sidewalks are in poor condition, and steps are of various heights.
9. Everyone told us that the hot chocolate here is unique, but we didn’t taste much difference.
10. Some of the street musicians don’t have much of a singing voice, and their playing can at times be painful to hear

“San Cristobal is really a captivating city. Even the air, and particularly the deep blue of the sky, seem somehow different here than elsewhere in Mexico and the greens are definitely richer than anywhere else in this country. Anyone traveling here in winter should know that because of the altitude it can get cold, and freezing at night. Fortunately, it’s also generally sunny here in winter, and that quickly warms the air during the day. The Native Americans who come here from the surrounding villages to sell their handicrafts give the place an exotic air. If they succeed in selling anything then they buy one or two items and set off for home. Tourists are naturally interested in the places they live, so many visit the villages of Zinacantan and San Juan Chamula. If you don’t have a local guide then the villagers are likely to act in a stiff, suspicious manner; it’s not that they’re unfriendly, but they are rather reserved and don’t generally make friends with outsiders. This is something you have to accept.” (J.K., 2014)

“San Cristobal de las Casas is one of the jewels of Mexico! It’s a long way from any big tourist destination, but a favorite destination for domestic tourists and the number of international visitors is increasing year-on-year, thanks to the airport barely an hour away (in Tuxtla Gutiérrez)

San Cristobal sits on an elevation of 2200 meters, surrounded by dense forests, so the climate here is significantly cooler than in other cities nearby. The Spanish conquistadors founded the city in 1528, and their influence can still be seen in some colonial-era architecture. It isn’t as elegant as Puebla, but the simple, brightly painted houses make it a charming, attractive travel destination.

What makes San Cristobal fundamentally different is firstly the architecture, with colorful houses under wide roofs and planned, perpendicular streets in the downtown area, but it would be much better to show all this in pictures, because it’s difficult to describe. The other distinctive feature is the ‘Europeanness’ or perhaps rather ‘diversity’ which you can experience here.

This was the first Mexican city we came to since setting off from the far north where we found some culinary variety! (and not just local dishes). Of course, you can find any type of cuisine in Mexico City, but while San Cristobal is a city of just 200,000 people, still, we found a cheese shop (with both domestic and imported cheese) as well as a French bakery selling really good French bread (very rare in Mexico!) There was also a chocolate shop which not only sold handmade chocolate and candy but also delicious hot chocolate. It’s impossible to list all the things we found to tempt the eye or the lips.

The main attraction, however, was the coffee! I’m not really a coffee fanatic, but based on my experiences at home, I at least expect that my drink won’t be prepared from twice-brewed coffee (as in Indonesia), that the milk won’t be burned, and that I’ll get it at a drinkable temperature… But each to their own, everybody has different tastes. There are plenty of places in San Cristobal that know just how to brew a good coffee, so every day we were able to try a new café and taste the arabica coffee from the surrounding hills.

The city is an an interesting blend of Native American Indian influences, with their distinctive dress and folk art (even today, many tribes live in the surrounding villages) and the businesses which have been established to serve the growing number of visitors to the city – the large numbers of restaurants, cafés, souvenir shops, etc. Amid the colorful throngs at the market, however, it was heartbreaking to see Native American women out selling goods with tiny babies strapped to their backs, and sometimes very small children in tow.

The city has three pedestrian streets, which are all full of shops and restaurants (and pedestrians, especially around the New-Year holidays), but on the other streets there’s hardly anybody, and it’s possible to stroll more comfortably.

The three pedestrian streets meet on two squares. One of these is a large park, while the other changes in the evening into a market for handicrafts, where old women sell embroidered tablecloths, dresses, and all kinds of beautiful, colorful textiles.

We explored the city’s surroundings, and visited several native villages, including some local markets, and biked out to some nearby caves, where it’s possible to take a boat trip and picnic if you plan it in advance. The area is so mountainous and uneven that even in the ‘cold’ winter we were covered in sweat, and our kids were exhausted by the end of the day, but it was worth it. Then in the afternoon we lost ourselves in the crowds and tasted the delights of the streets. One pedestrian street leads to a viewpoint, and though it’s a bit of a slog to get to the top, it offers a fantastic panorama of the whole city below. Beyond that, we also discovered forests, running trails, paths, and even a miniature theme park in the area around the city.

Not far from one of the other pedestrian streets we came to the unique little handicraft market, where many kinds of handmade textiles were on sale, alongside beautiful amber jewelry. The shops of the market are ranged beneath a covered arcade, and among them stands a tiny church which is very difficult to find, even if you’re quite close – especially since it was being renovated during our visit. Still, it’s well worth seeking out! All in all, we found San Cristobal a very unique little city in the middle of a beautiful landscape! 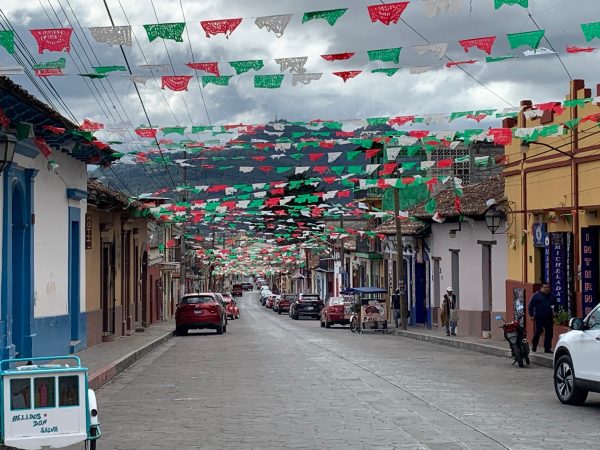 Being a small city, it is easy to walk everywhere.

The most common public transport means are buses and the or truck-like "combis." There are many routes in the city, but all of them leave from the central market.  It is easy to recognize where each one is going since it is indicated on the front. The "combis" ticket costs six pesos, and the hours are usually from 6:00 in the morning until 8:00 p.m. The frequency is about 10 minutes. On Sundays, fewer "combis" are circulating.

There are small bus "terminals" on the Boulevard on the sides of the OCC terminal (Av. Insurgentes, near the center, about 20 minutes walk from Central Park). There are usually several companies for the same destination at similar prices.

There is usually no problem finding taxis at any time of the day or night, and much less in the city center. The prices are around 25-30 pesos within the center.

Many visitors do cycle around the city. The city is in a valley and so biking anywhere is not complicated, except if you go to the Cerrillo neighborhood, which has its slopes. Car drivers are usually quite respectful to bikers. 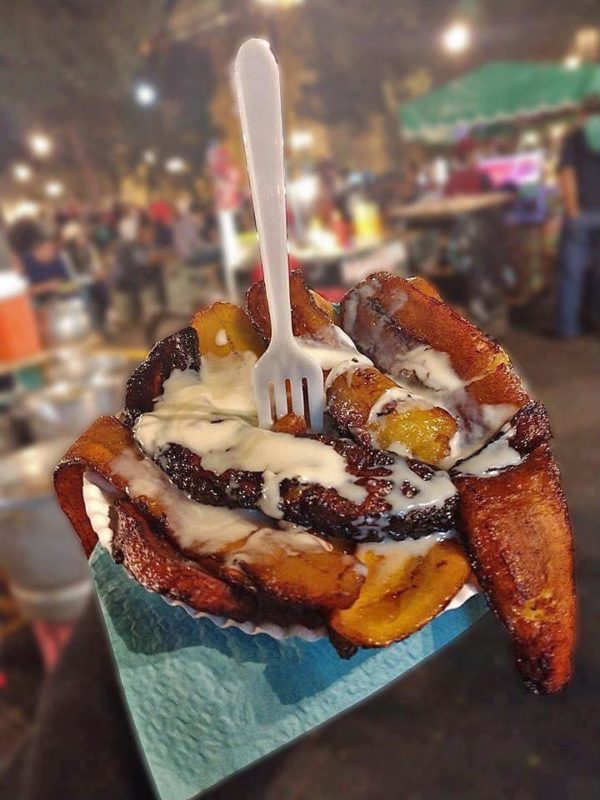 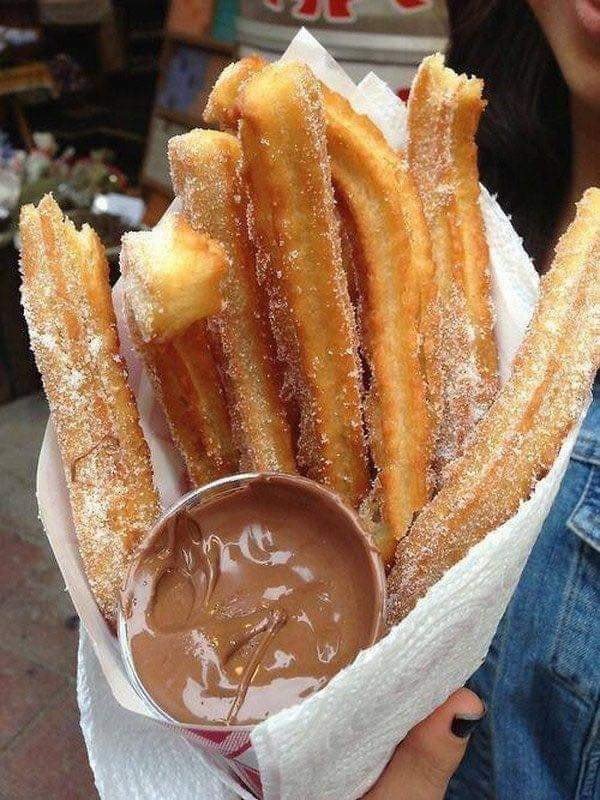 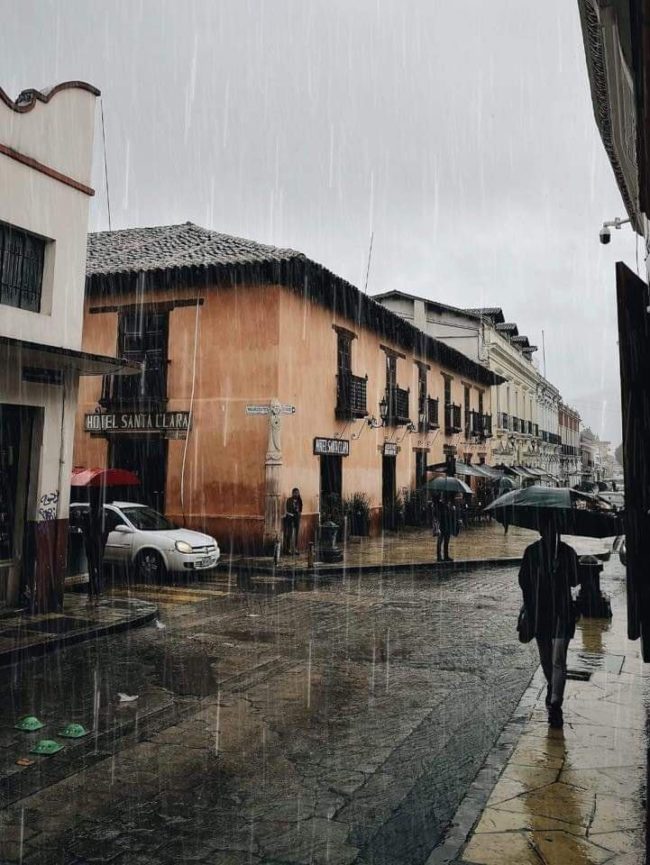 San Cristobal de las Casas - we were not singing in the rain - c.l. photo