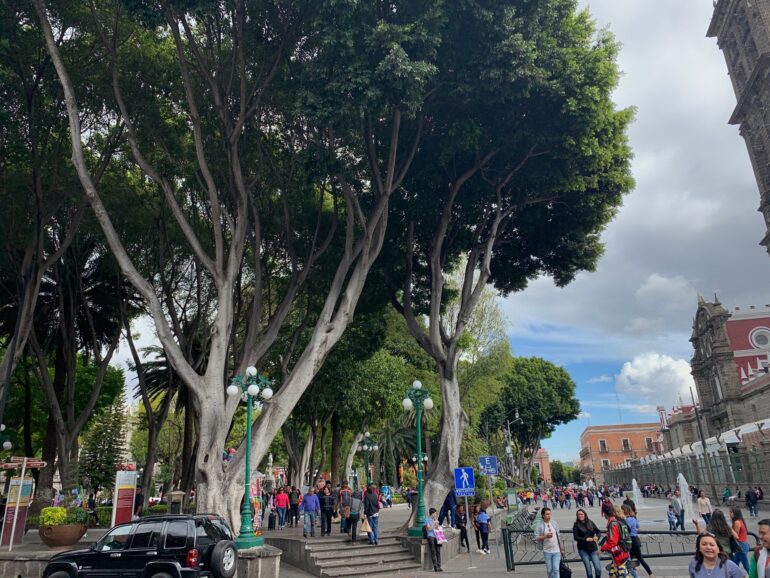 1. Many artistically designed wrought-iron balconies and elegant crystal candelabras
2. The main square, the Zócalo, is very atmospheric, especially when illuminated in the evening
3. The downtown area (cento histórico) with its cheerfully colored tiles and decorative facades, and the creatively designed little shops
4. Stumbling across gorgeous churches at practically every corner
5. The artistic quarter, or Barrio del Artista, is a wonderful place, especially on weekends
6. A very safe place, largely thanks to the significant police presence – we didn’t see a single suspicious looking person
7. Nearby Chulula, with its pyramid-shaped church
8. Many restaurants and coffee shops in pleasant inner courtyards
9. The pavlova in the Tarlets café was a heavenly slice of airy lightness
10. I loved looking up at the twisting branches of the banana trees which line the pedestrian streets and the main square

1. Apart from the historic downtown (centro histórico) most streets are either run-down or too anonymous to warrant much notice
2. The people here don’t dress with as much flair as elsewhere
3. Two disappointments: The Paseo Bravo wasn’t very interesting, and the Mercado de Sabores Poblanos was gastronomically plain and monotonous.
4. Impossible to climb the Popocatepetl volcano, because it was closed. What’s more, the continual fog made it impossible to even take a photo of it from a distance
5. Candy Street (Calle de los Dulces) was also a disappointment: the local taste for excessively sweet candy meant that we didn’t find a the single thing we wanted more of
6. Puebla is a beautiful city, but we found our previous destination, San Cristobal de las Casas, more exciting and exotic
7. From about 11 am on weekends, the streets are so crowded that it’s difficult to enjoy the experience of walking
8. There are so many beautiful churches in this city (at least from the outside) that we had to skip many, which was a shame
9. Restaurants here employ a strangely large number of waiters, which makes the slow service somewhat suspicious
10. It’s impossible to enjoy a relaxing meal or a drink on the main square, because every two minutes your table is approached by a peddler or a beggar (it doesn’t seem to bother the locals – they’re used to it) 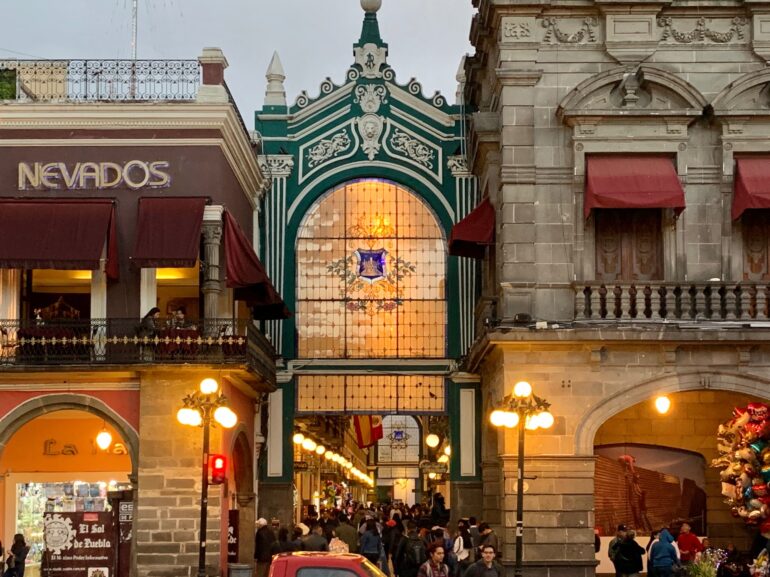 Puebla is a scenic mountains town just 2 hours east of Mexico City. It is as quaint, as it is charming, featuring beautiful colonial architecture and modern designs. The food in Puebla makes it a destination in its own right as gorging yourself on tacos Arabes and mole poblano will make anyone happy.

Puebla has a lived in feel that isn’t matched by anywhere else I’ve been in Mexico. The streets are packed with locals and the tourists, for the most part, are Mexicans visiting from other parts of the country. There aren’t tourist agencies on every corner and you’re left discovering things on your own — something that can be a very joyous way to travel.

It’s picture-perfect: a colonial city full of colorful street markets and backed by snow-capped volcanoes that’s hard to resist. On top of that, Puebla has a ton of history, culture, beautiful architecture, and some delicious, unique food. It’s even a UNESCO World Heritage Site.

We went with ADO which I’ve taken before in the Yucatan while visiting Cozumel, Tulum, etc and I very much enjoyed it. The bus runs hourly and costs 200-400 pesos one way depending on the time of the day. The bus ride is just over two hours and drops you off at the Puebla CAPU station. Alternatively, you can also take an Uber from the airport for roughly 1,000 pesos. If you are 3-4 people, this could be a no brainer as it is faster and more convenient. I was originally planning on doing this until I realized how close the bus station was. Make sure to tip the Uber driver some cash for going so far out of his way!

From Mexico City itself, there are very frequent buses from TAPO to Puebla CAPU. You don’t need to buy any tickets ahead of time. Simply rock up and choose the bus company of your choice and you will be on the next bus out! 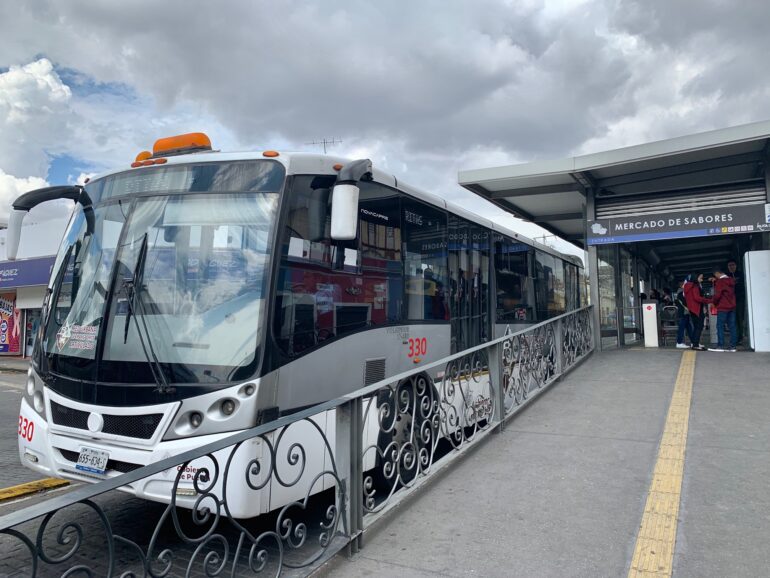 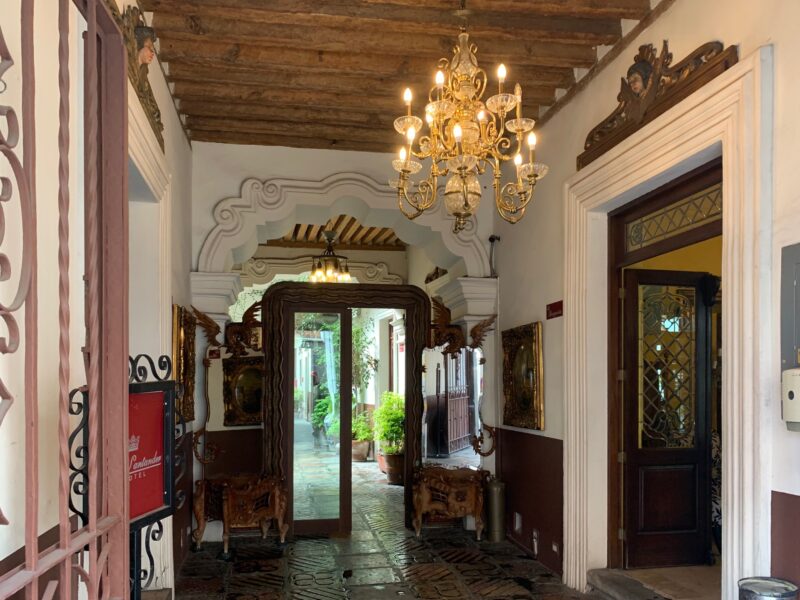 Be careful about eating street food as your body has different types of germs, and you may risk indigestion. 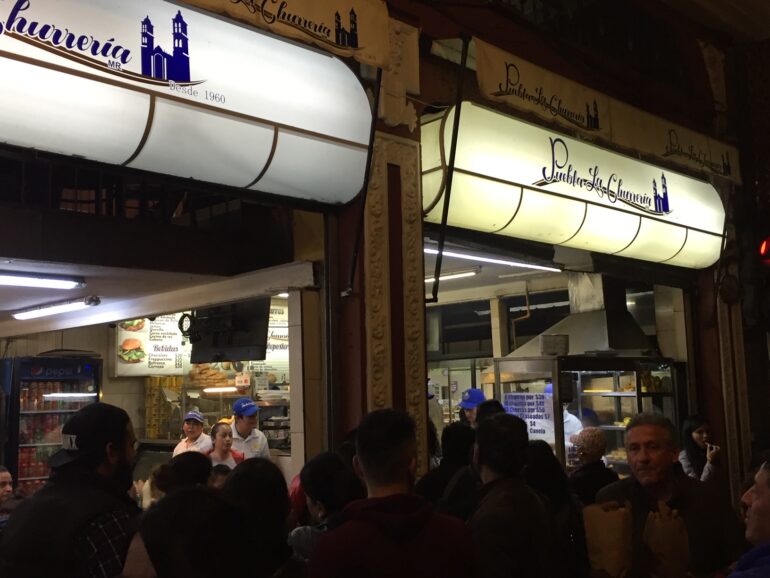 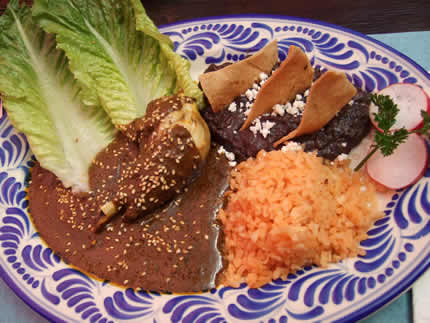 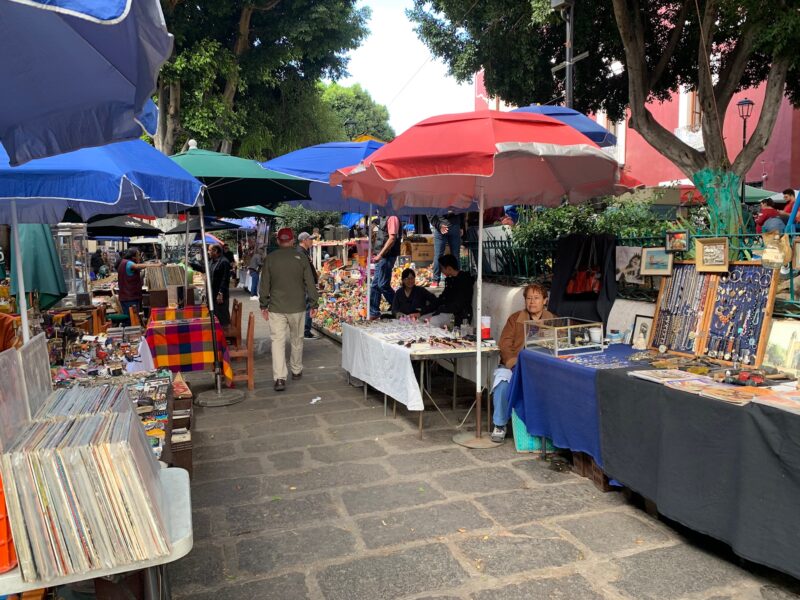 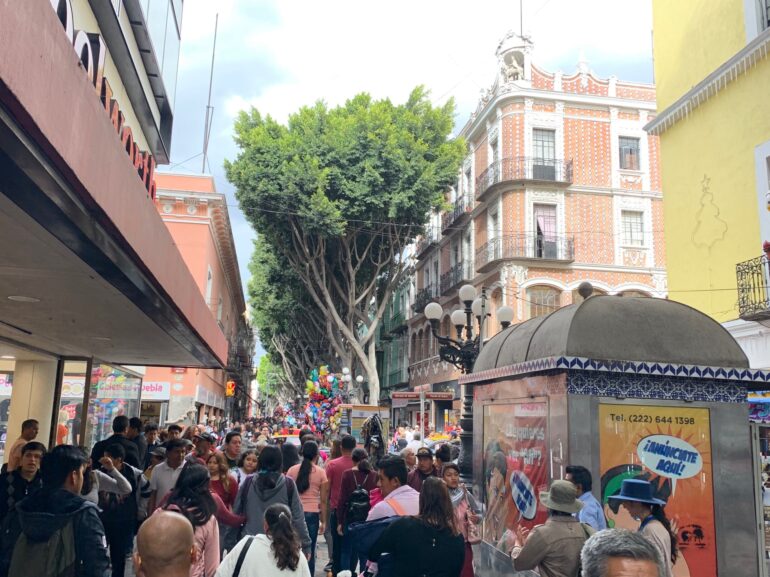 By Mexican standards, Puebla is a fairly friendly city for tourists. Even late in the evening, it’s safe to walk the streets. Of course, if you’ve got yourself blind drunk and you’re stumbling about in dark
alleyways, then you’re still asking for trouble, but if you keep your wits about you and show a modicum of common sense, then there’s no reason for alarm. It’s a clean, orderly city, and criminals
generally feel uncomfortable in such places. As elsewhere, though, it’s a bad idea to walk about with expensive jewelry or technology on display.
The country’s gang wars are not a danger to tourists, as these rival groups only target one another. Still, it wouldn’t be wise to wander in the city’s suburbs after dark.

Allegedly, Puebla is safe because the families of many drug cartel members live here, so there is a “truce” among the cartels for that city.

Tap water is not drinkable.

Try to avoid eating street food, as you are likely not used to its ingredients. Most foreign visitors get sick from eating than from any other cause. 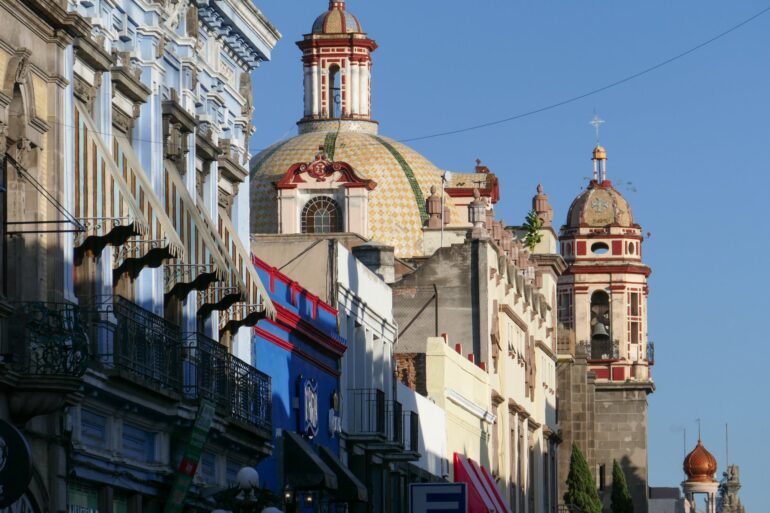 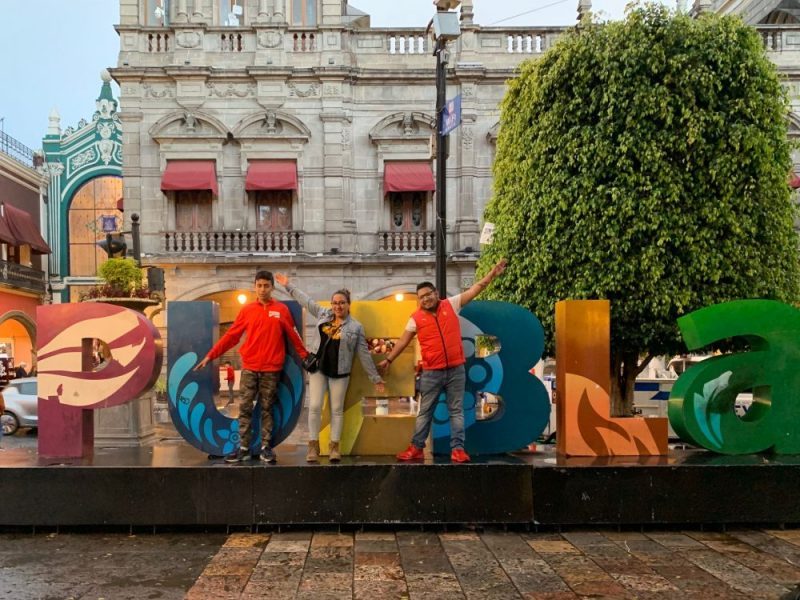 Puebla city is in east-central Mexico, about 110 km (68 miles) south-east of Mexico City. Puebla city is capital of a state of the same name.

Population (in 2020): 1.4 million in the city area, 3.2 million in the Urban area (agglomeration included) - Puebla is the fourth-largest city in Mexico. 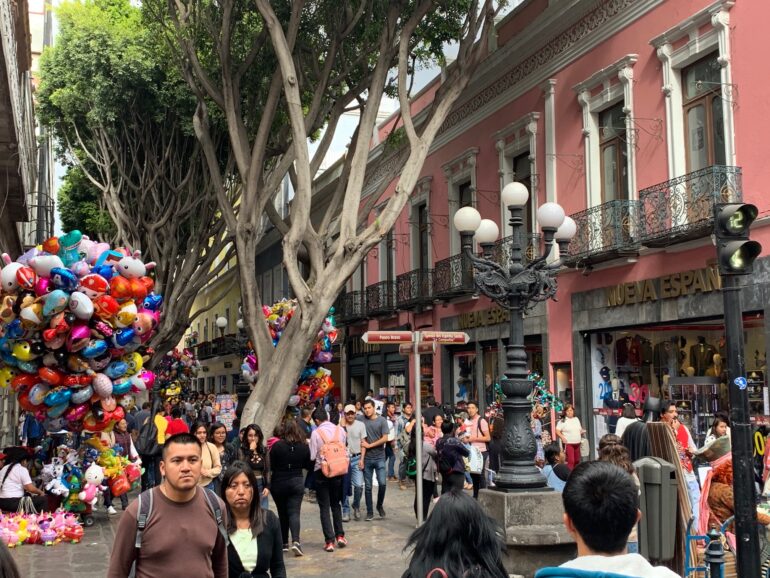 Puebla - a street in the city center - Krista photo 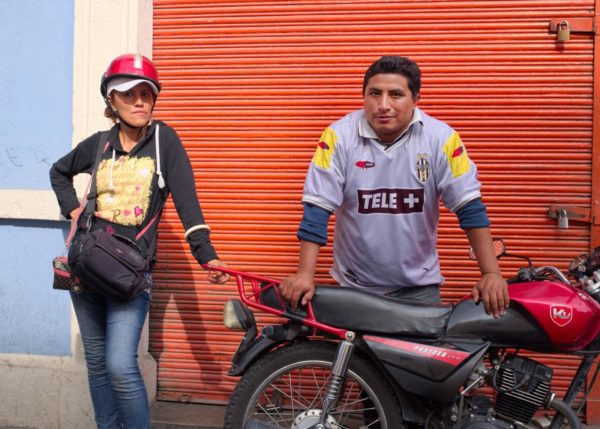 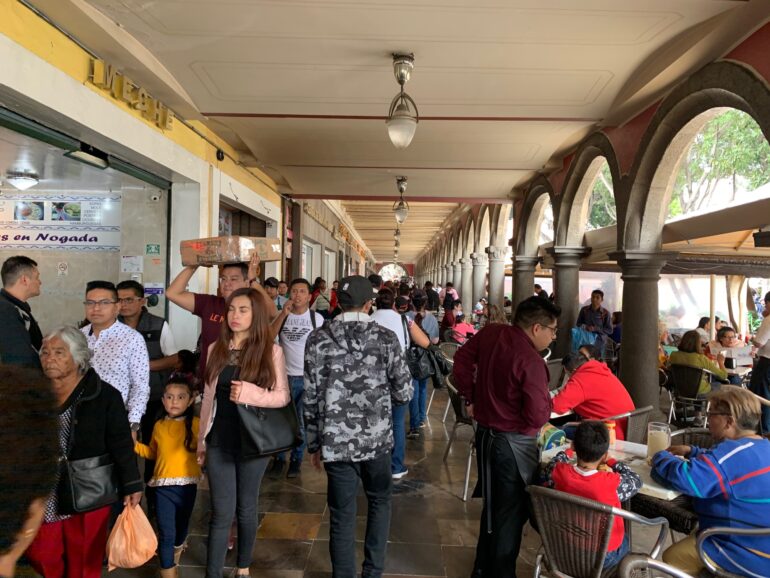 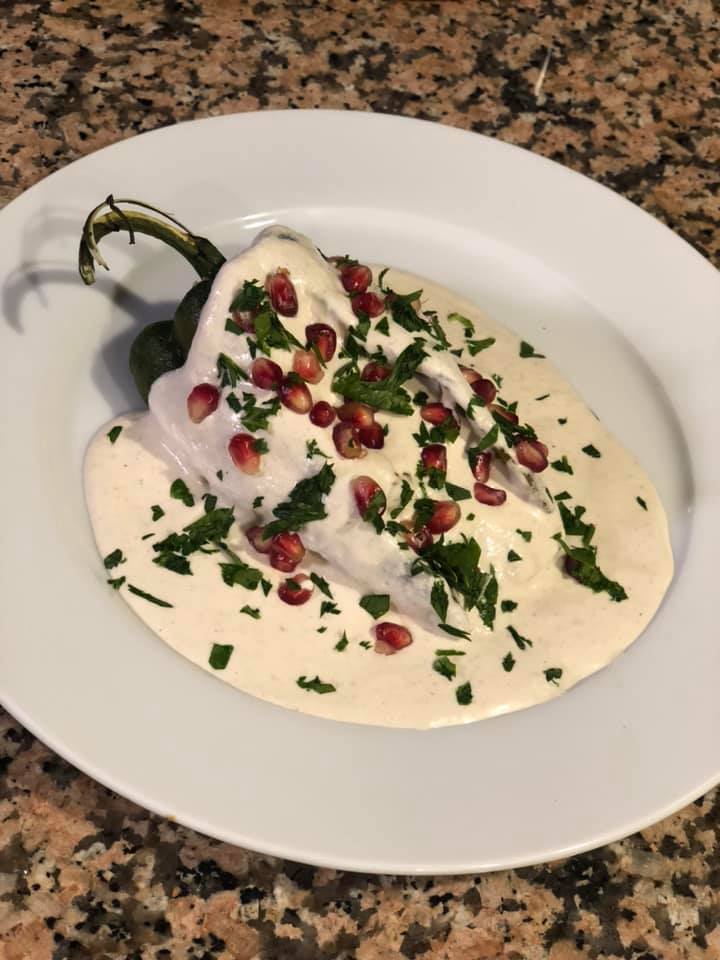 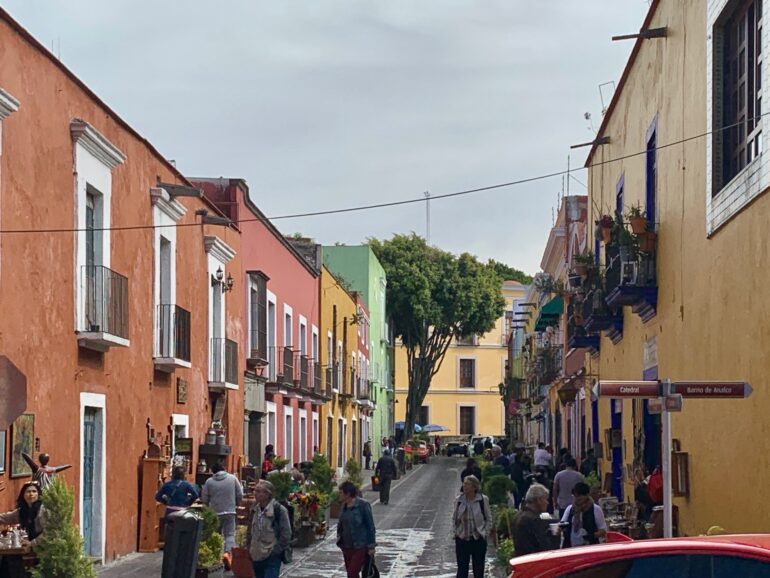 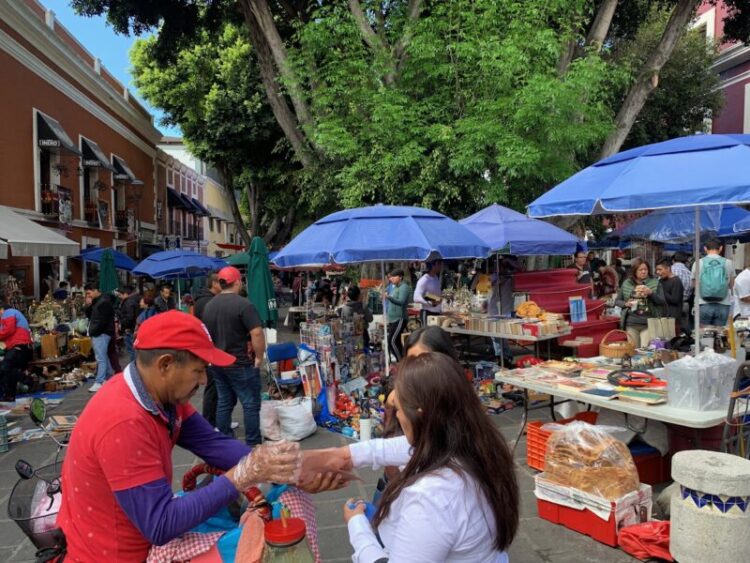 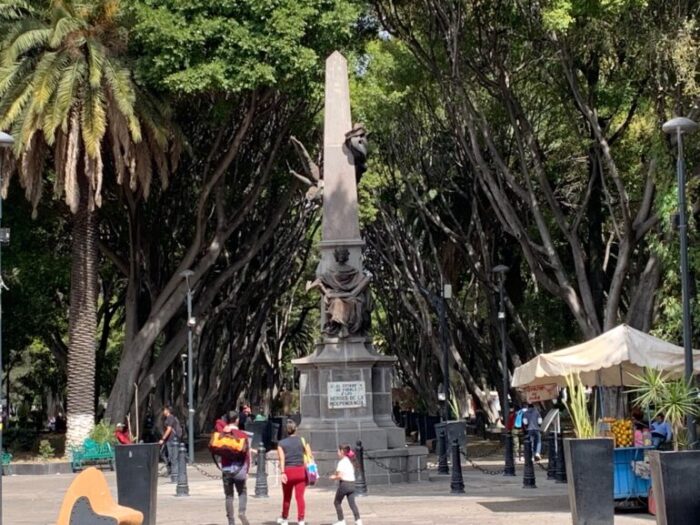