1. Great to drive on small country roads with little traffic and enjoy the calm landscape

2. Traveling in this region, we learned a lot about the interactions between French and English medieval history

3. Honfleur: the port and the small steep streets branching out from there, the seafood restaurants and pancakes

4. The impressive Bayeux Upholstery and the spectacular cathedral in this city

6. The beach of Etretat and the Falaise d'Aval rock formation

7. In Giverny, the house of Claude Monet and his garden (the birthplace of Impressionism)

9. Some lovely villages of Normandy:  like  Dinan, Fougeres, Beauvron, or Vitré

1. In the smaller cities, in the villages, it isn't easy to communicate without knowledge of French

2. On weekdays here and there life is too slow, you may feel somewhat isolated

4. Mont Saint Michel is often too crowded with tourists

5. The snobbery of Deauville

6. The locations of D-Day (Normandy landings) were a bit boring for us,  non-Americans

7. Villages in Normandy (and Brittany) are far from being as picturesque as in many other parts of France, say Provence 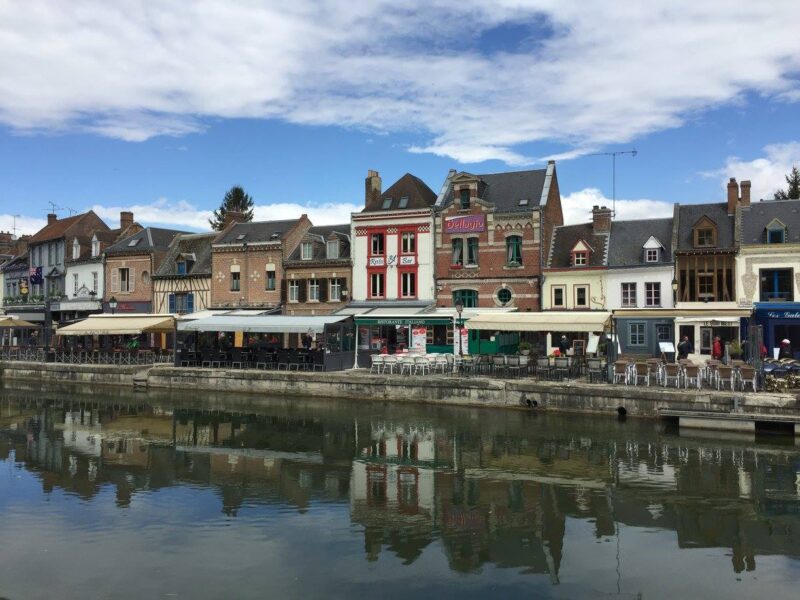 “Normandy is gorgeous! The French people here are friendly and cheerful. If they really have to, they can even speak some English. There are English-language menus in many restaurants.
The roads are of good quality. French drivers can be temperamental, but they’re generally obliging.
The agricultural land is well maintained. Norman cheese and butter are divine, as of course is their seafood.
Towns and cities are clean, but there are a lot of “little surprises” from the local dogs on the sidewalks. Normandy isn’t overrun with tourists, with the exception of Mont Saint Michel.
I finally understood why the impressionists were in the habit of painting the same building or landscape multiple times. The changeable weather always shows the landscape in a new light. Clouds come and go, the sun shines and rain follows, then the wind, etc.
(Regi, 2017)


The whole landscape of Normandy is studding, and thanks to the climate everything is extraordinarily green. By the side of the road, you can see ‘camembert’ cows grazing. From their milk is made both the famous Camembert cheese and Normandy butter.
Everything is very tidy and well-maintained – a striking feature for unfamiliar eyes.
Personal highlights:
-    The sight of the cliffs at Etretat
-    Excellent and delicious French cuisine (and an amazingly broad selection of sea scallops)
-    Mont-Saint-Michel was an unforgettable experience
-    The Saturday fair in the marketplace of Honfleur
(Leila, 2017) 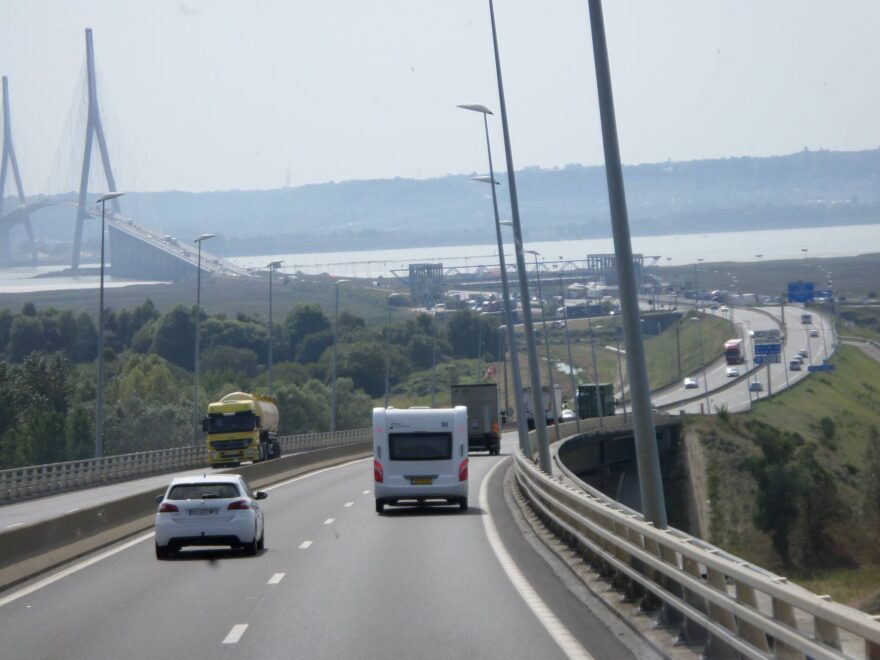 “One of the pillars of Norman cuisine is seafood: fish, shellfish, crabs, and all sorts of other poor creatures that can crawl and scuttle but can’t cry out in pain. Our route took us through Dives-sur-Mer, Honfleur, Deauville, and Trouville (along the coast, in other words), and we ate some unbelievable food along the way. I’m sure there are some travelers whose stomachs would turn if they had to use a small spoon to extract the greenish-yellow intestines of a crab while his pincers were still snapping, but I loved it! Alright, I’m pulling your leg slightly: the crab was already completely dead – the pincer snapping was just a function of the dying nerves.

The other famous gastronomic specialty of Normandy is the Trou Normand – literally the Norman Hole. The rural inhabitants of the region have a peculiar biological conviction: in their view, while eating, a small hole is formed in the stomach, and it is life-threatening to fill this hole with more food. Only alcohol is a suitable stopper. With this in mind, while you’re eating your main course (for instance, you might be embroiled in a losing battle with a 30cm-long ‘andouille de Vire’ – a kind of sausage) you should take a half-sip of calvados (local apple brandy) following by more eating. If you want to fit in with the local diners, raise an eyebrow towards the waiter and ask for a trou Normand (if he hasn’t brought you one already). You’ll see – from that moment on, everyone will look on you as a civilized human being.” 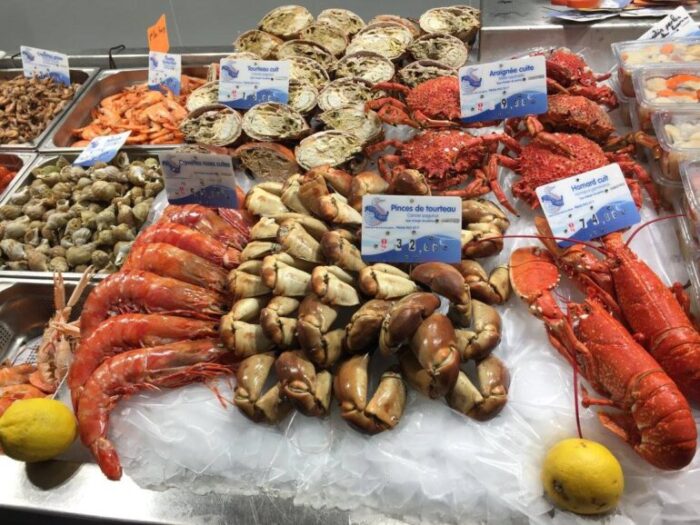 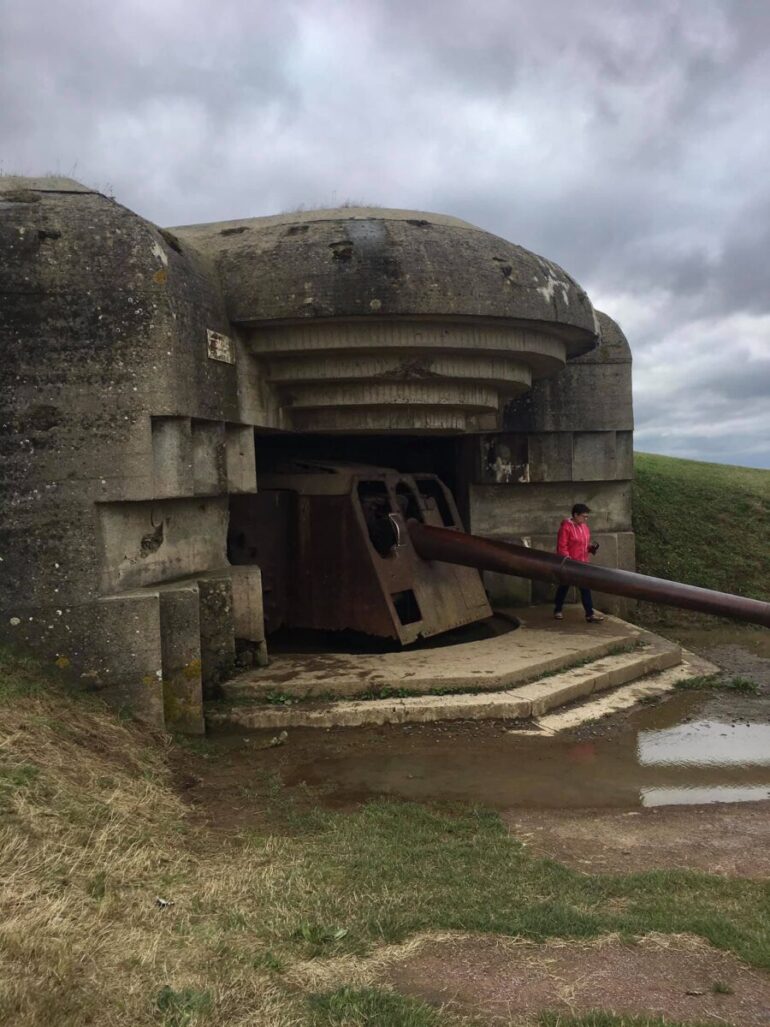 Mont Saint Michel is always crowded, but it’s a wonderful experience to climb the abbey’s medieval streets, with the sea surrounding it on all sides. Many restaurants, gift shops, cafés, and patisseries await the weary traveler.

"Let's say that the 1 km between Mont Saint Michel and the mainland is quite variable, and depending on whether it is low or high tide, you might be able to walk across from the continent. (However, this is not recommended to anyone, as the tide can come in so fast that the initial walk will turn into a run as you try to get across despite the rapidly rising water level. The peninsula quickly transforms into an island.)”


"The abbey of Mont-Saint-Michel rises from the surrounding plain on the border between Brittany and Normandy. Legend has it that the abbey was founded in the 8th century by the Archbishop of Avranches, in whose dream Archangel Michael appeared and asked him to build a chapel on the island. Over the centuries, an entire fortress was built around the chapel, then monasteries were founded here by Benedictine monks in the 10th century, and after the French Revolution, the building functioned as a prison. In 1979 it became a UNESCO World Heritage Site.

Tides are very high here and can rise up to 15 meters. A few times a year, Mont-Saint-Michel is completely surrounded by the sea, in which case you can only get there on a narrow road. The abbey can also be approached through the muddy estuary, but only with a guide because the tide and the sudden fogs can make it difficult to find your way around correctly. Lucky shepherds graze sheep on the nearby pastures. The price of their sheep is many times the average price, as their meat is particularly tasty due to the salt pastures. Mont-Saint-Michel's only downside is its popularity. In high season, huge crowds of tourists arrive here, making a relaxed viewing almost impossible. However, the spirit of the place is not diminished, and the visitor, while grumbling a little, is already trying to figure out how soon it will be possible to return.” 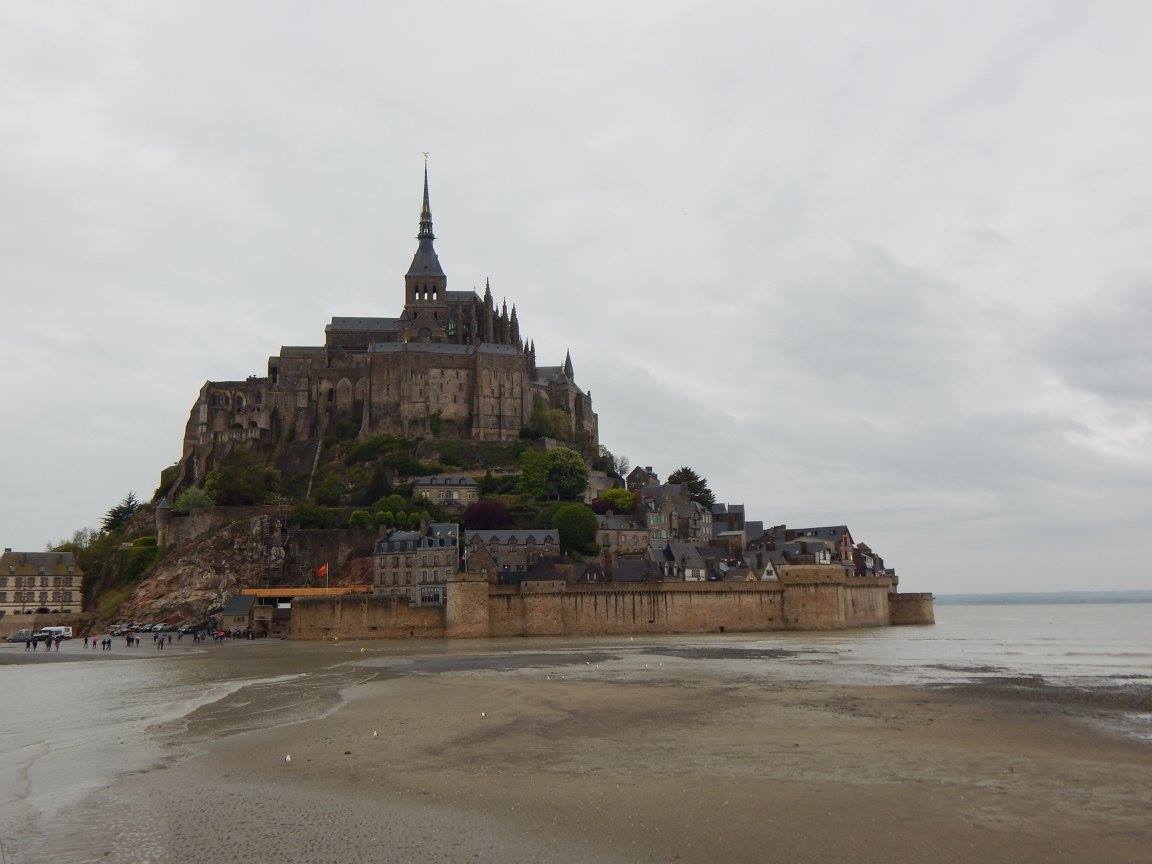 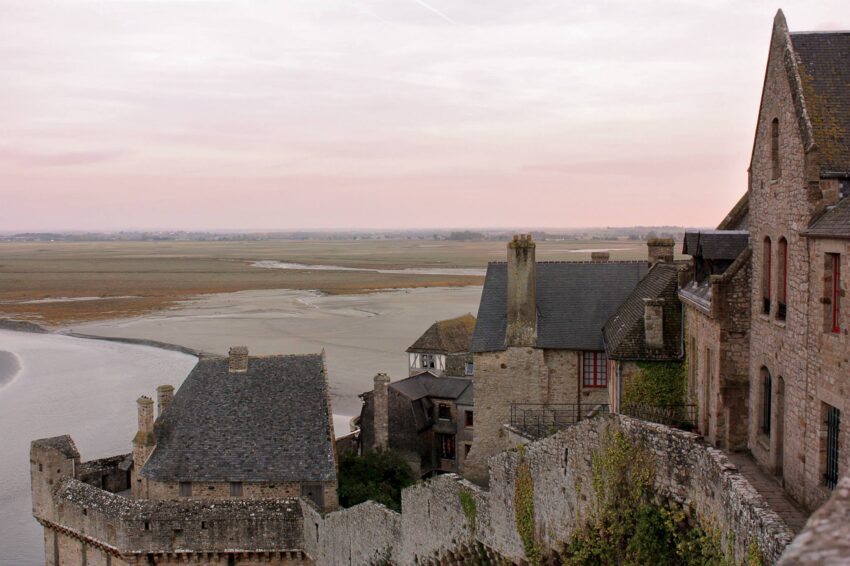 The rock formations along the coast of Etretat are spectacular.

Bayeux, and in particular its famous tapestry, is not to be missed! In the museum, the tapestry can only be viewed with an audio guide, so every visitor is told about the important moments in the Battle of Hastings and the victory of William the Conqueror. 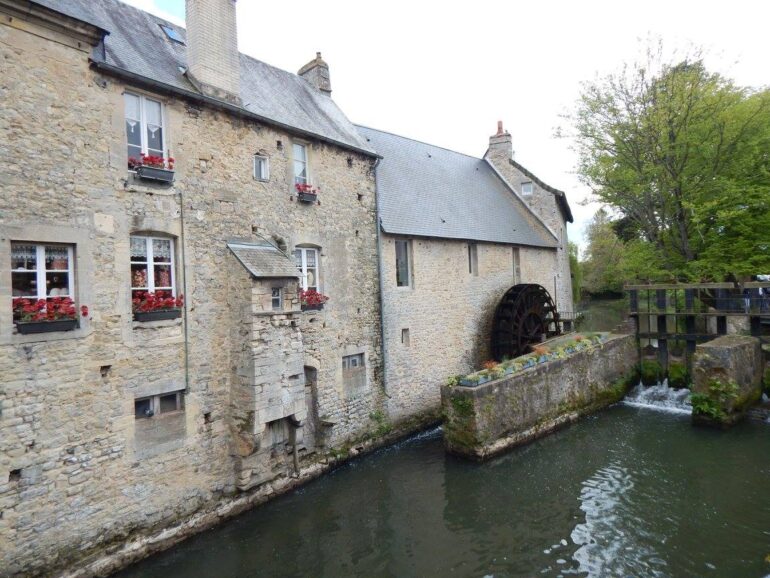 On one of the beaches where the Normandy landings occurred, the Americans established a World War II museum, where many artifacts bring D-Day to life. The display includes not only military vehicles and weapons but also many everyday items used by the soldiers. If you have even a mild interest in history you should definitely visit, and spend an hour or two at the museum and on the beach. 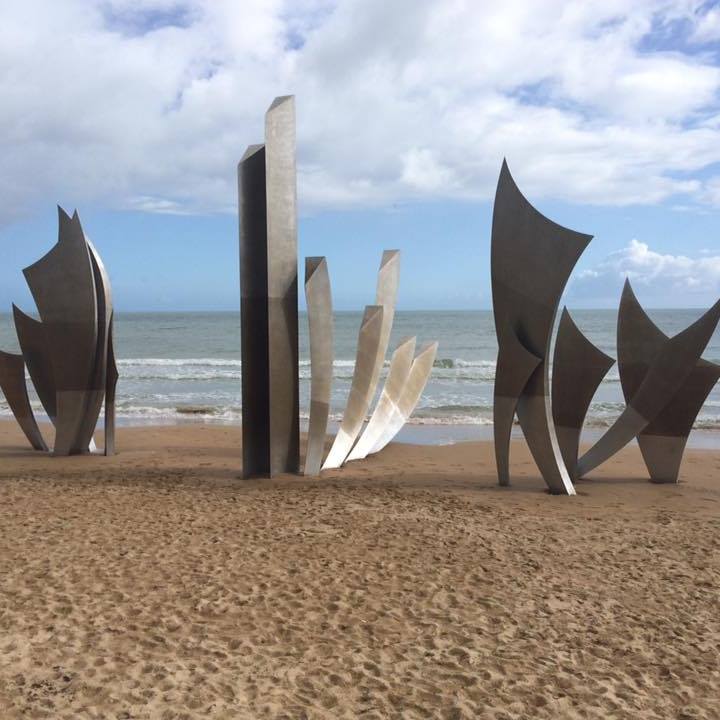 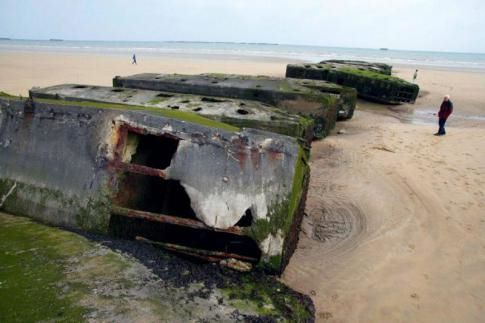 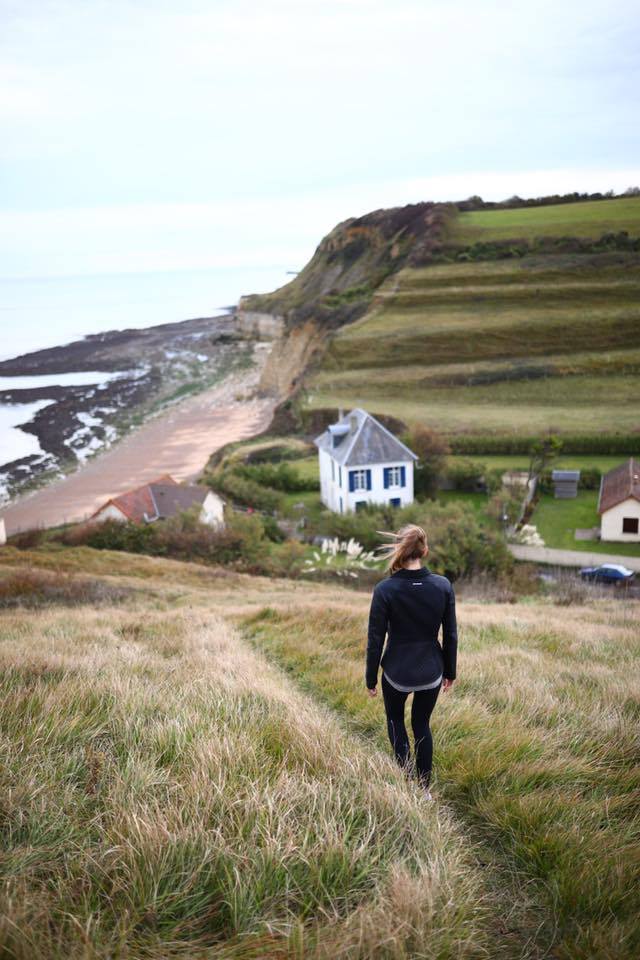 The port of Honfleur, with its many slate-roofed houses, boats, restaurants, and market, is a truly picturesque location. 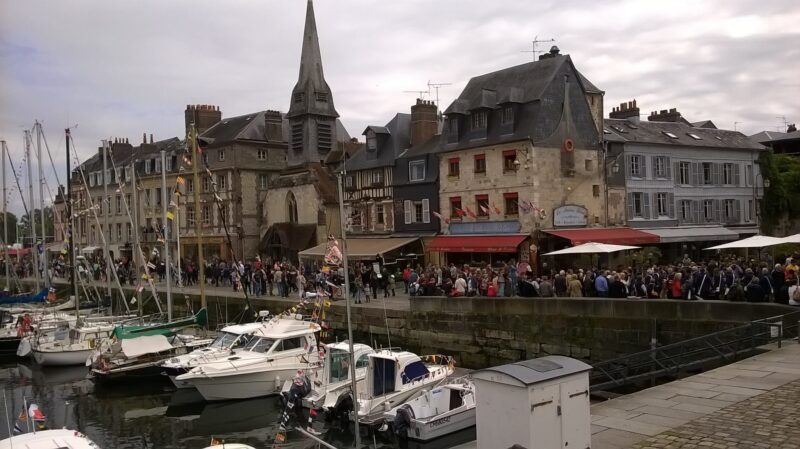 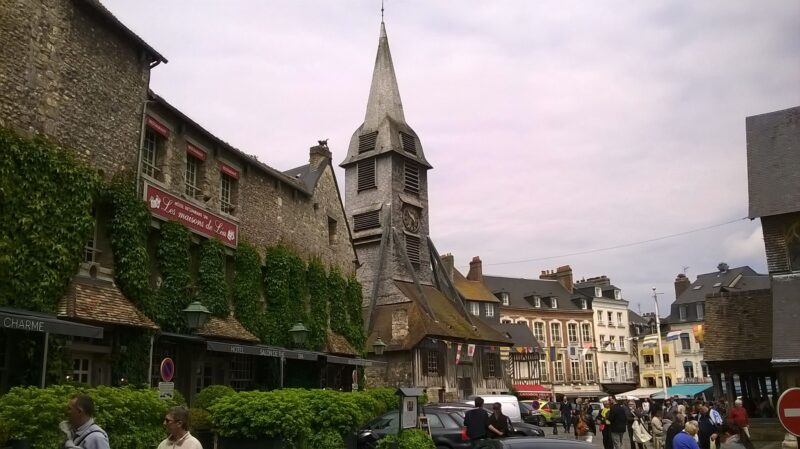 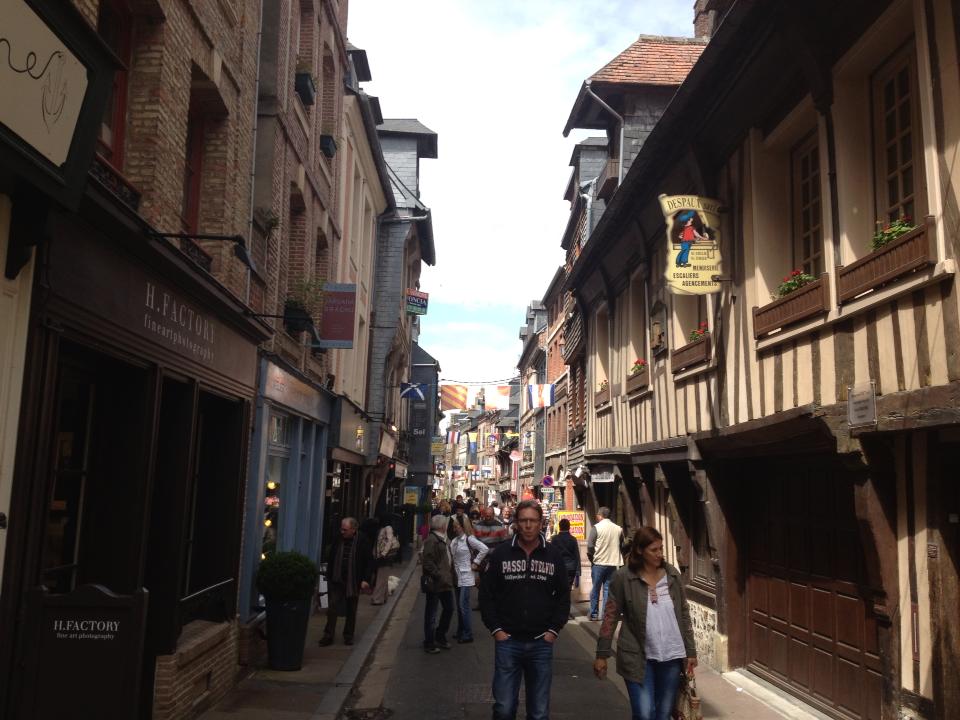 Le Havre is a modern city. It’s worth a walk to see the apartment buildings erected there in the 50s and 60s, as well as its neat green spaces and modern theater. 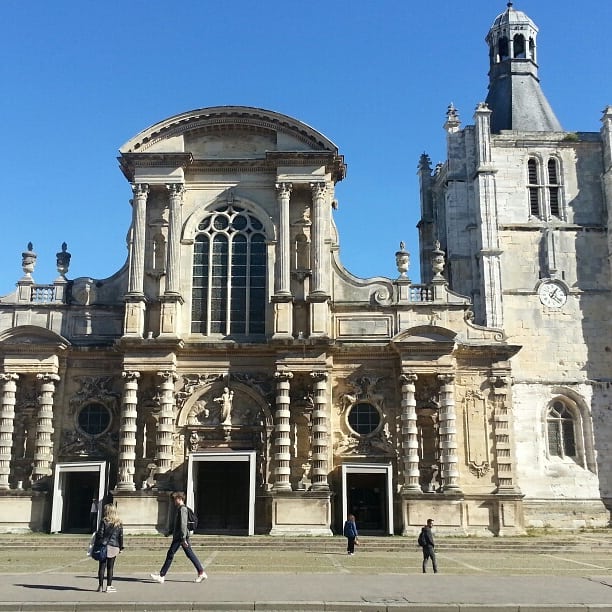 Douville’s sandy beaches: it’s no surprise that so many sun worshippers still flock to them. 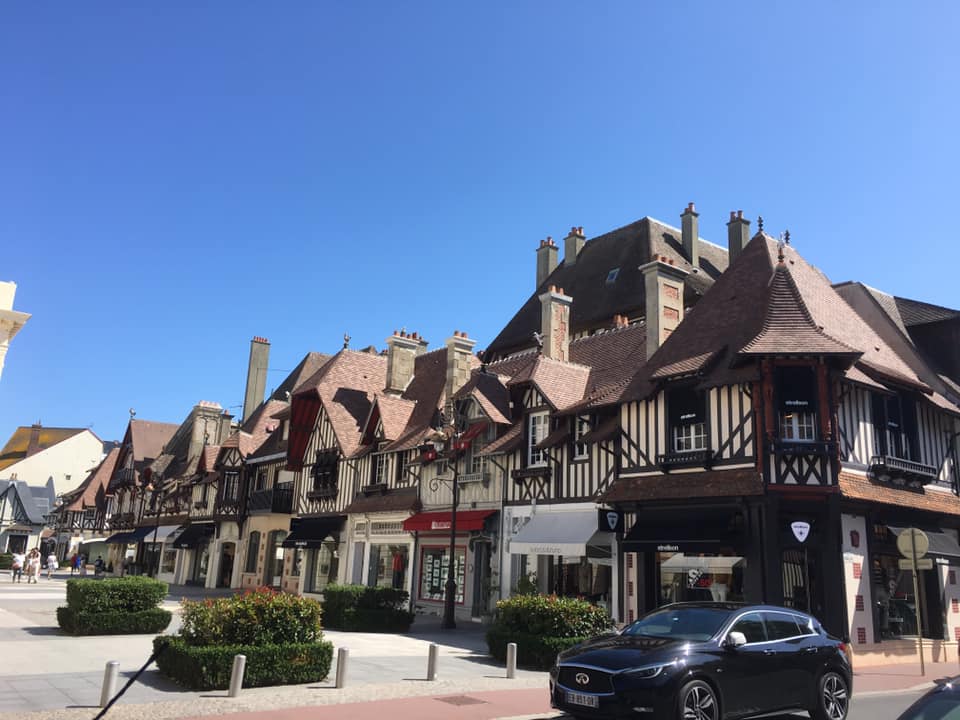 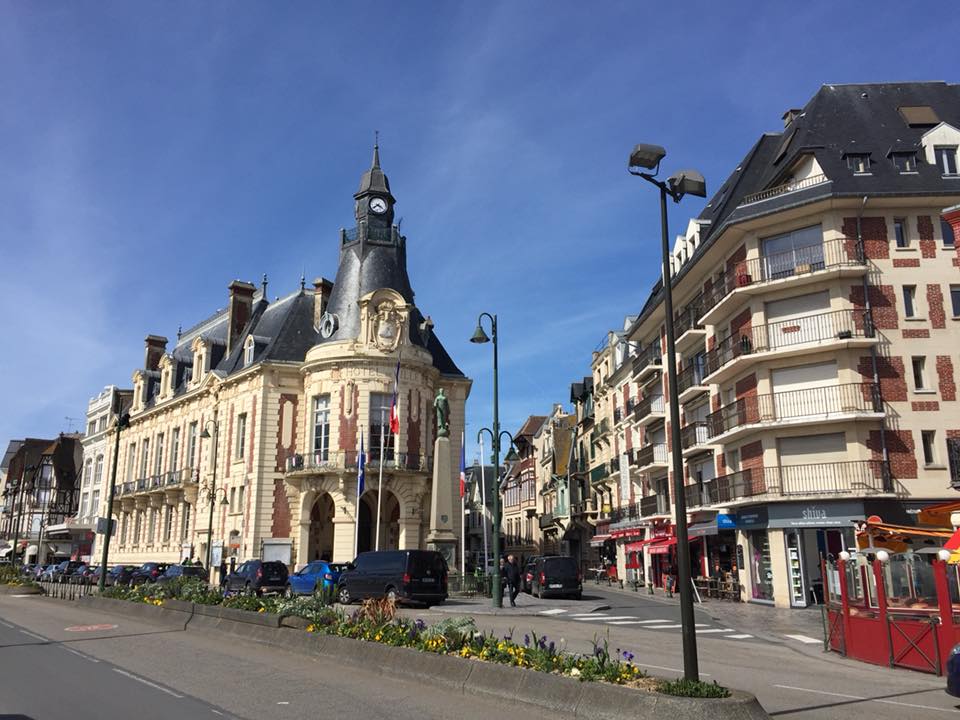 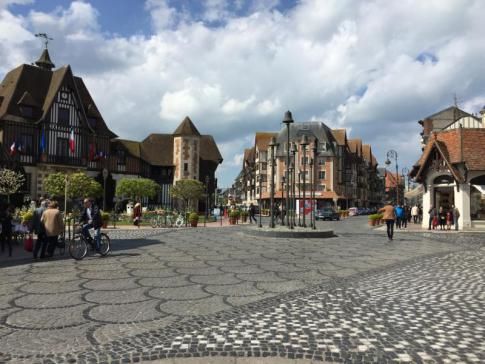 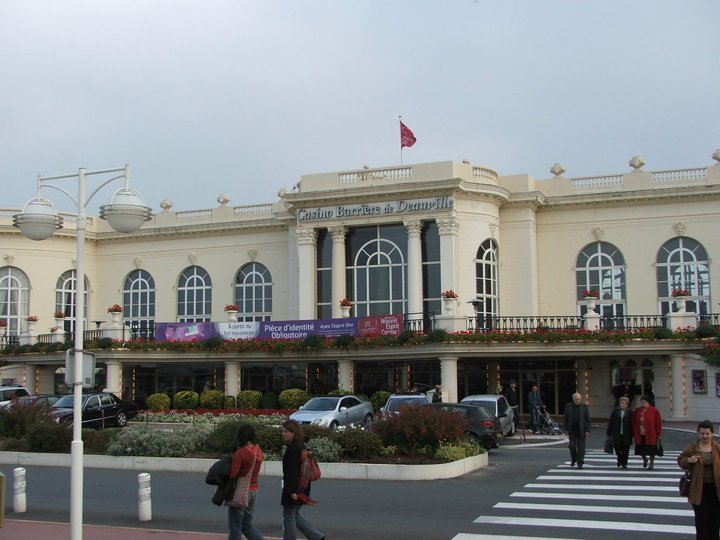 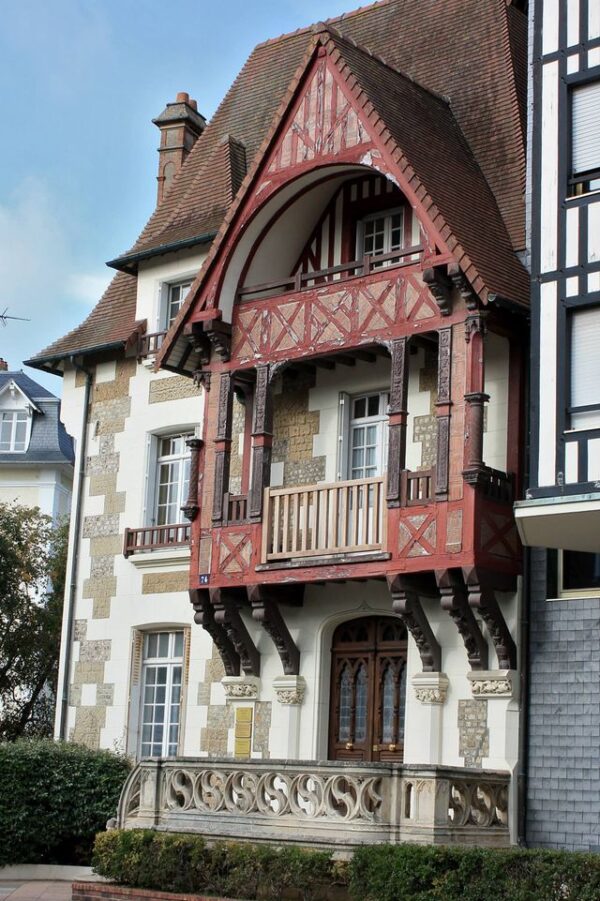 Rouen cathedral is the chef-d'oeuvre of the French gothic. No wonder it inspired Monet. 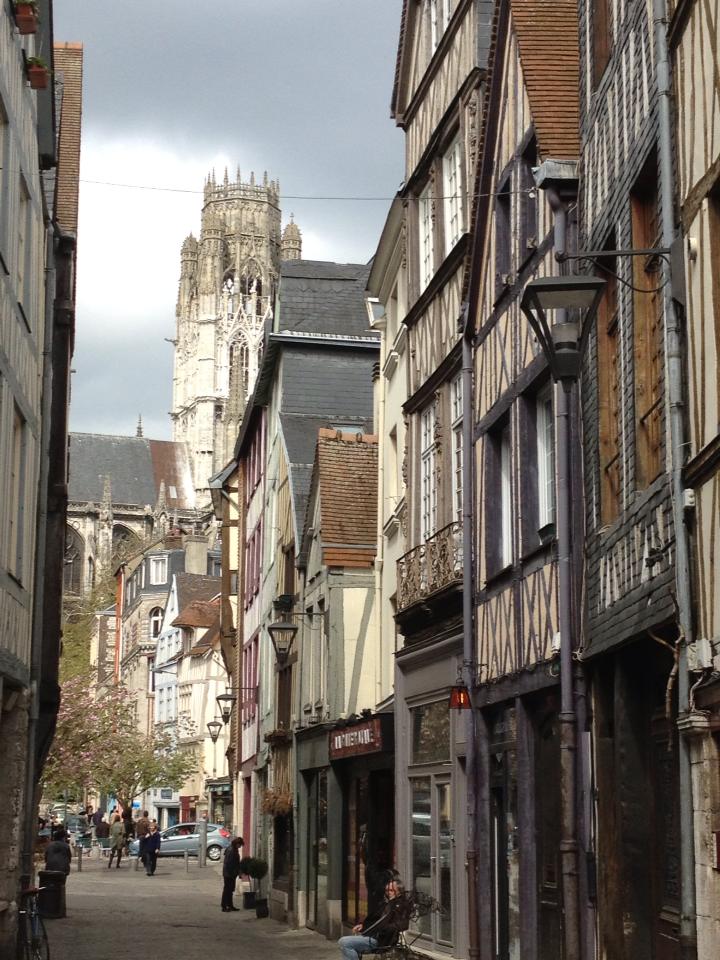 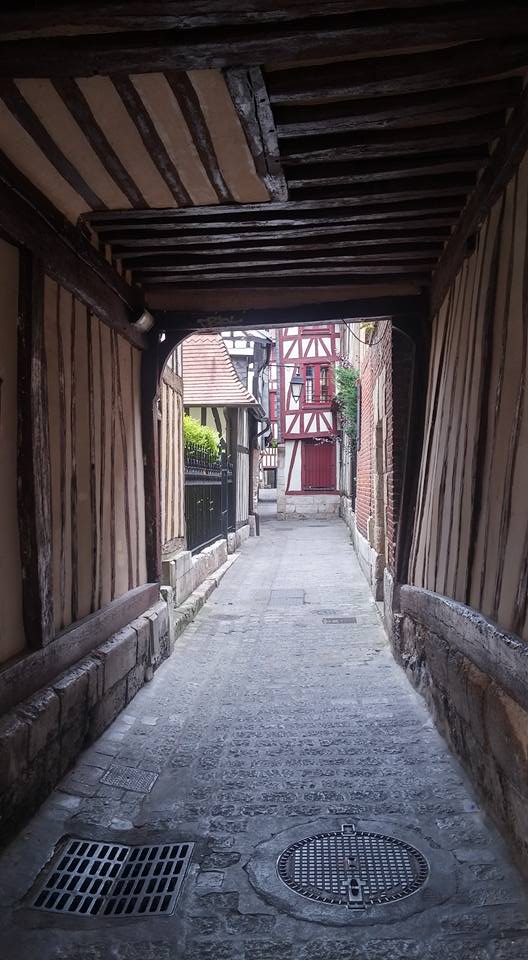 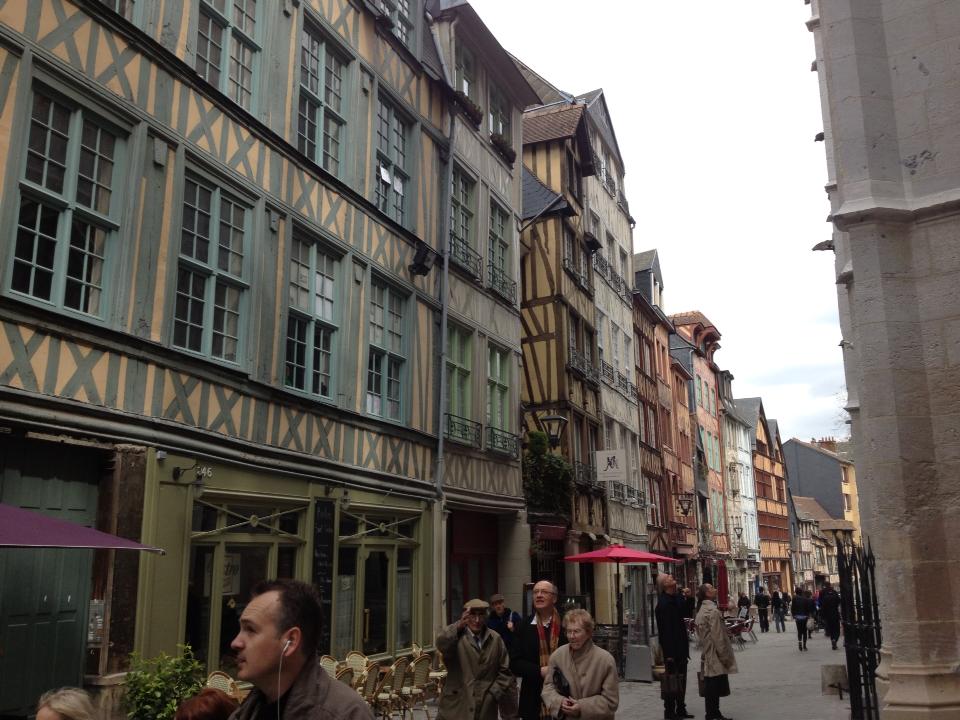 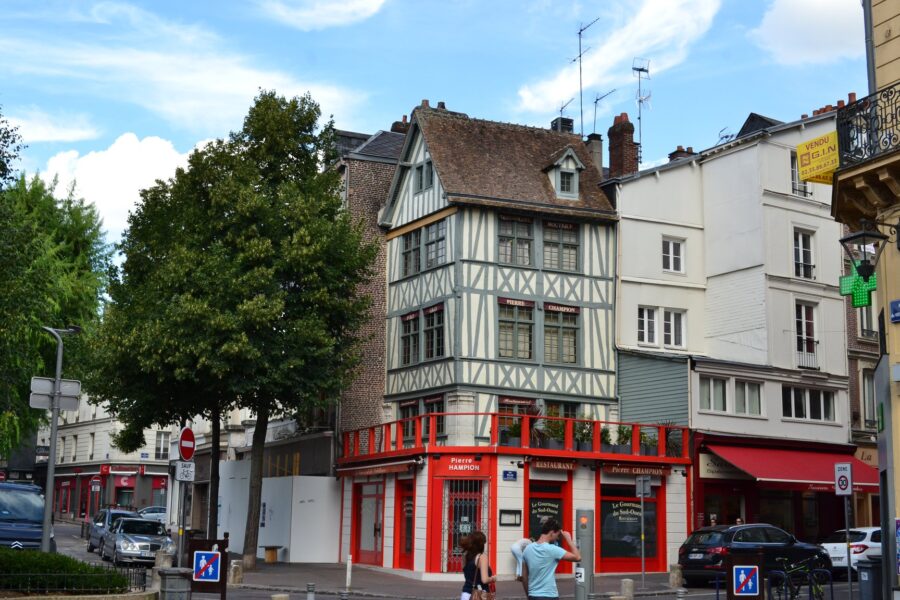 Amiens cathedral is spectacular! Jules Verne is buried in the city cemetery. 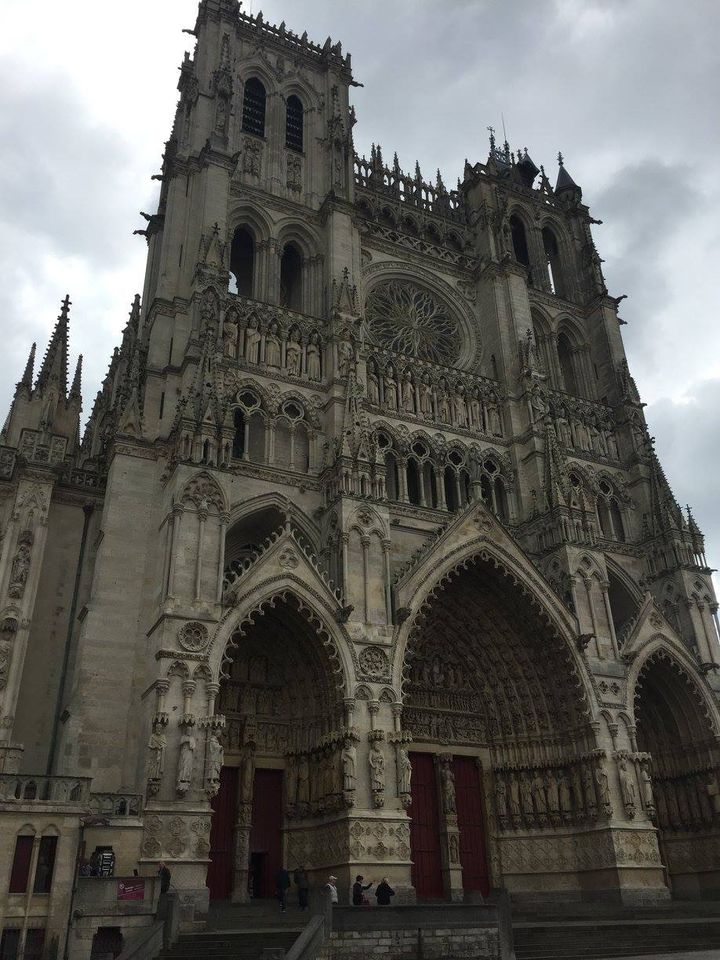 Normandy - Amiens - The Cathedral Basilica of Our Lady of Amiens - m.l. photo 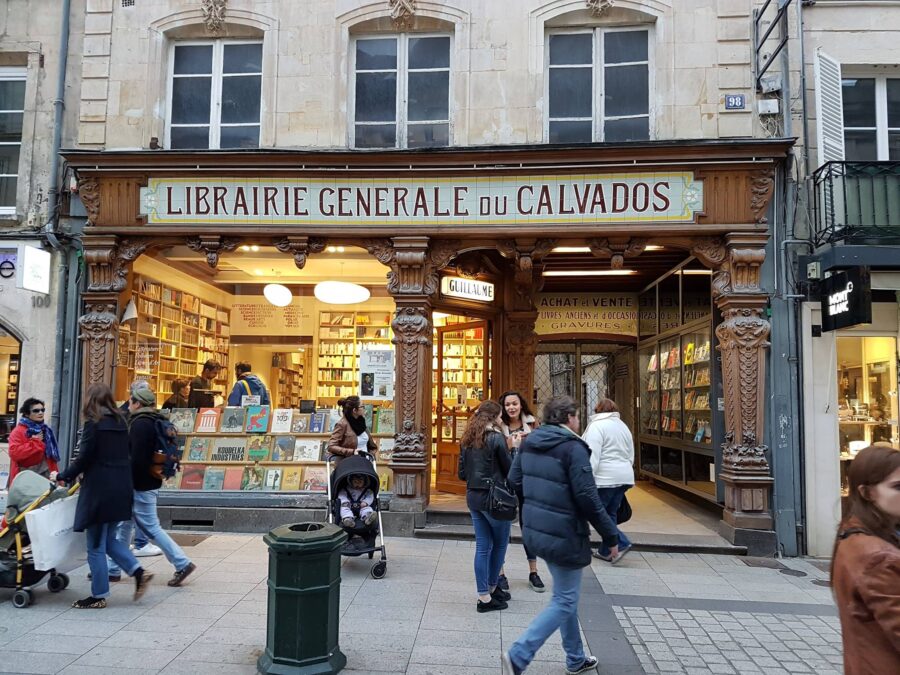 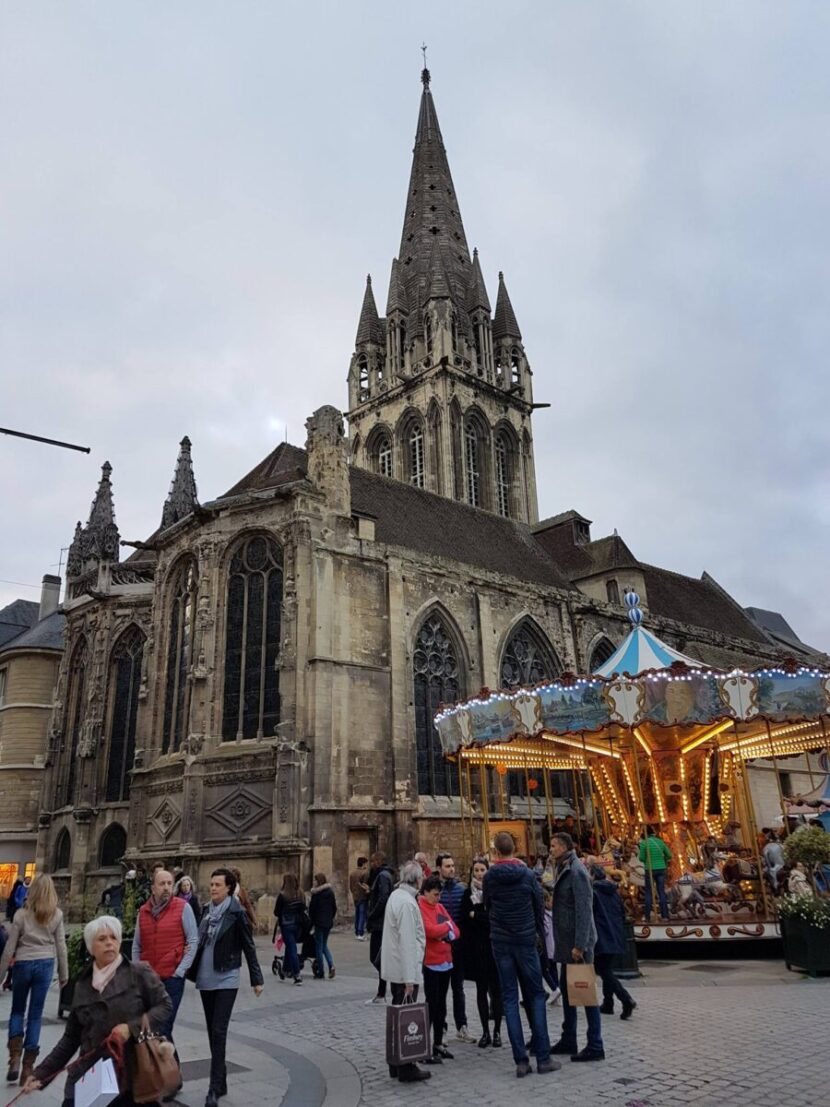