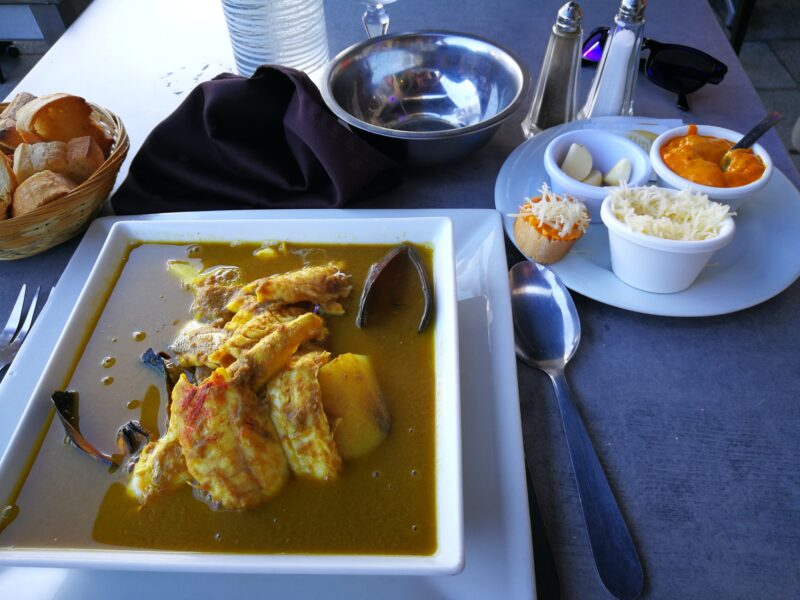 2. Looking down over the city from Notre-Dame de la Garde

3. This is the birthplace of my all time favorite food: bouillabaisse (a rich fish soup) – as it happens, I had the best one ever in Marseilles

4. The houses with their tall, narrow windows and distinctive shutters

5. The broad, comfortable sidewalks on the grands boulevards

6. The fantastic cake selection at the La Cure Gourmande patisserie

7. The pedestrian zone of the Vieux Port (Old Port)

8. The dramatic-looking rocky cliffs and bays (les Calanques) south-east of the city

9. The fascinating architecture of the Cathédrale de la Major and the Centre de la Vieille Charité

1. Due to the German and Italian forces bombing the city in 1940, there are few historical monuments left

2. The wind blowing from the sea is sometimes too strong (especially standing on the land bridge looking towards the Vieux Port)

3. Many homeless people and beggars

4. Trash, urine smell in some streets

5. It is not a safe city - you can even get mugged (we thankfully didn't) and there are many rough looking men and agressive North African youth gangs in the streets

6. Some beautiful buildings have been disfigured by graffiti

7. No other city in France has such terrible traffic jams

8. One day is definitely enough to visit Marseilles

9. The Mediterranean-style turmoil and messy atmosphere can become stressful

10. Traffic regulations are largely ignored by all 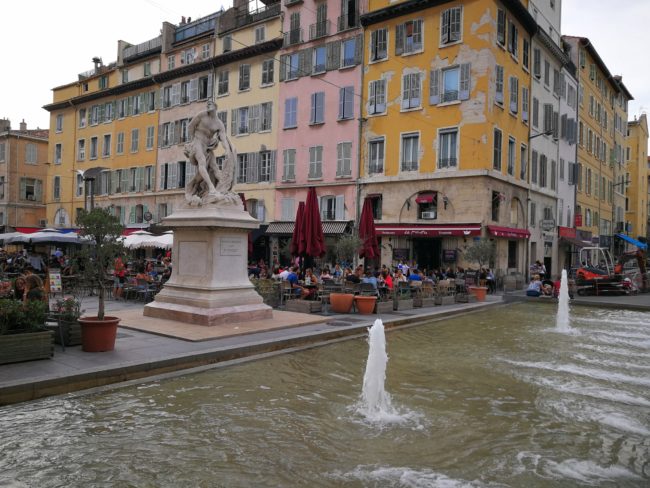 Marseille is the melting pot of the French Riviera: it accepts anything, though it never melds it into a coherent whole. It’s composed of many different neighborhoods, each with their own appearance and identity, just as the city’s inhabitants all appear very different. What links them all is the wild atmosphere of the Mediterranean, as well as a sort of disordered plenitude. There can be no question of polite restraint.

On the hills, traffic fluctuates according to the usual anarchic rules of the road in Southern Europe. Red lights mean nothing. After two days in Marseille, I got used to the rules: if a car is coming, don’t walk, if there’s no car coming you can hurry across the road – but hurry! Motorcyclists habitually drive on sidewalks too, and it doesn’t seem to bother motorists that they have to fight with both other drivers and the odd courageous pedestrian to win priority.

The central district is only a small part of this sprawling city of two million, and when you cross the imaginary boundary separating the center from the rest, you’re confronted by a starkly urban environment: rows of ugly gray apartment blocks, shop fronts and lines of neon lights, with one or two solitary trees the only signs of nature. Exhaust fumes and expressionless faces.

No matter how charming the city’s central core is, the picture sketched above represents the reality of Marseille, where the big, anonymous city is the defining element. It’s also a dirty city, swimming in litter everywhere. It’s not only the red lights they ignore, but also the municipal waste bins.
Flip through the pages of a local fashion magazine… Marseille, as one of the major destinations on the Côte d'Azur, naturally features prominently, with its proximity to the sea, and the famous basilica of Notre Dame de la Garde shining on the hill overlooking the Old Port, a old Provencal chapel transformed into a grand edifice. There are hotels and villas with beautiful hillside panoramas, and wide shopping streets in the city center, with countless Porsche’s and Minis. The littering is also more restrained in this part of the city.”

"Marseille might be familiar with the Taxi movies, which were big favorites of mine. At first, I didn't really like the city, and I had a hard time orienting myself, even though I had a map from the hostel.

The first place I ended up in was a place that looked like an artist's quarter. I wandered around there a bit, ate a sandwich in the square, then sat down for a coffee that gave me a little boost. I turned onto some major road where I saw the Basilique Notre-Dame de la Garde at the top of the hill and finally had a direction to go. Up there! The basilica is stunning, both inside and out, and it was worth going there for the panorama. Inside, it was interesting that small ship mock-ups were hung from the ceiling, and I also really liked the white-red-gold colors decorating the church interior. And on the church's tower stands a giant golden statue of Mary, holding the baby Jesus. That's when my opinion of the city changed. Marseille isn't such a bad place after all!" (2014)
-----------------------

"Marseille is the melting pot of the French Riviera: it accommodates anything, though it does not knead it into a uniform mass. It is made up of different districts, just as the faces of the inhabitants are different. The things it brings together are Mediterranean madness, tangle, and abundance. There can be no question of restraint.

Traffic on the hills fluctuates according to standard Mediterranean rules: red lights, for example, don't matter. Within two days, I get used to the system: if a car is coming, stop. If there's no car, pedestrians can cross the street any time, so long as they hurry! The sidewalk is also used freely by motorcyclists. And drivers don't seem to mind that they mostly only have to battle the other cars and some brave pedestrians to get ahead.

Tucked away on either side of the Vieux Port is the old town center, which exudes an atmosphere like a fairytale small Provencal town. Narrow streets climb the hill, flanked by sand-colored houses with lavender-colored shutters. Even when the shutters are painted green, it seems that lavender color has still been mixed into the paint. The Provencal countryside colors are borne by the houses here, melting humbly into the landscape, the color of the rocky mountains, and the lavender fields.
Markets are held in many squares, the real outdoor type, which back home has more or less died out, or at least becomes as rare as white crows (well, let's be glad we still have indoor markets). Here you can find fruit, vegetables, spices, and clothes.
Around the market, the crowds mingle, stand, sit, have coffee, and play cards. Whether in a store or at a market, the vendors don't have poker faces – they tease you if you don't speak French (sometimes self-deprecatingly, sometimes mockingly, expressing their French elitism); it is small-town Provence, not a supermarket.

But the small-town milieu is only a small part of this city of two million, and crossing the imaginary frontier unfolds before us a new metropolitan scene: the rows of ugly, colorless two-story houses, shop windows and neon lights, and an occasional tree which is the only a herald of nature.

The smell of car fumes and glum faces. And no matter how enchanting the small-town core is, the reality of big-city Marseille is still genuinely reflected in this picture – with the emphasis on a big city, not Marseille. Marseille is also dirty and swimming in the trash, everywhere. The observance of red lights and the use of public trash cans are strictly voluntary.
And the city still has another aspect. Marseille is the European side of Africa, Esther says, and she's right – this style also fits Marseille, no wonder, as Marseille is just a step away from the North African coasts, making it one of the easiest ways to get into Europe. North and Sub-Saharan Africans live in the city just like the indigenous French and with the same rights (at least those who have been granted permanent status). They set up a stand at the market, the bazaar, or whatever they find for themselves. Some have opened African-style design shops. They reinvent themselves, I think, one way or another. The cultures are mixed, and the skin tones draw a pattern on the cityscape."

Marseille International Airport is 19 km from the city. 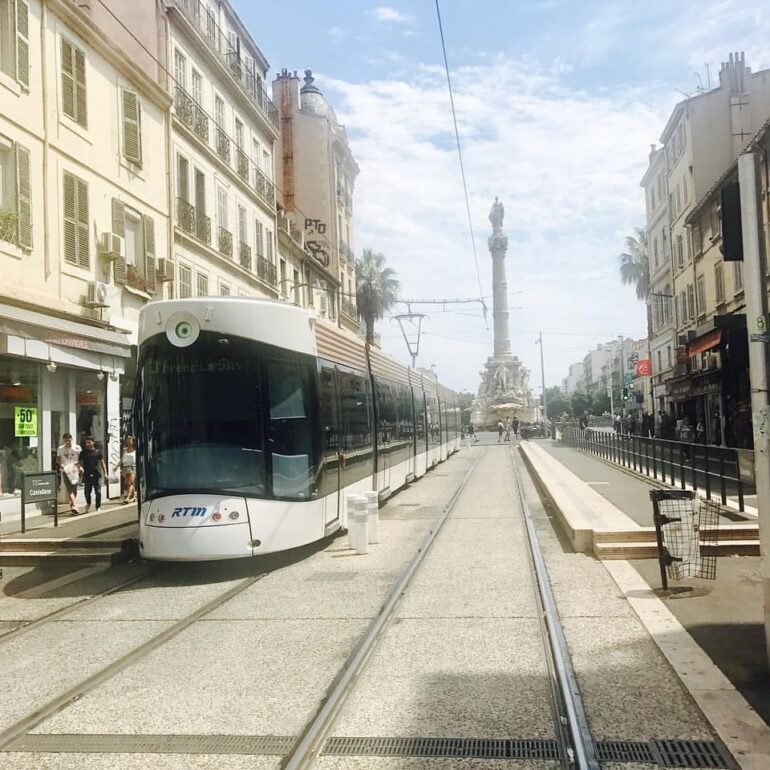 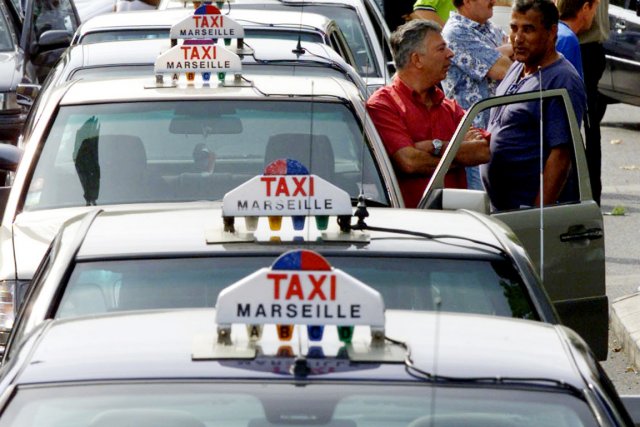 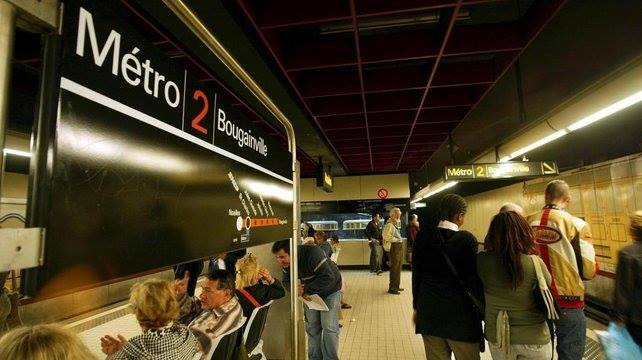 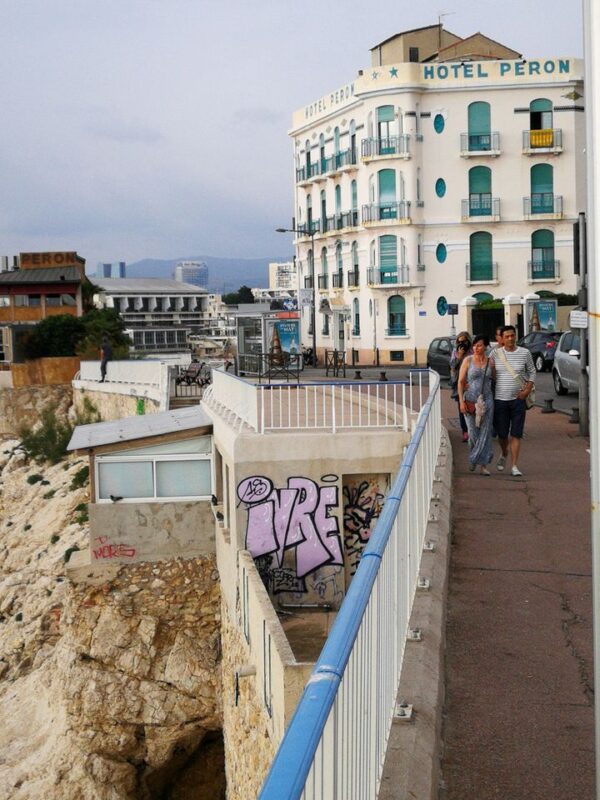 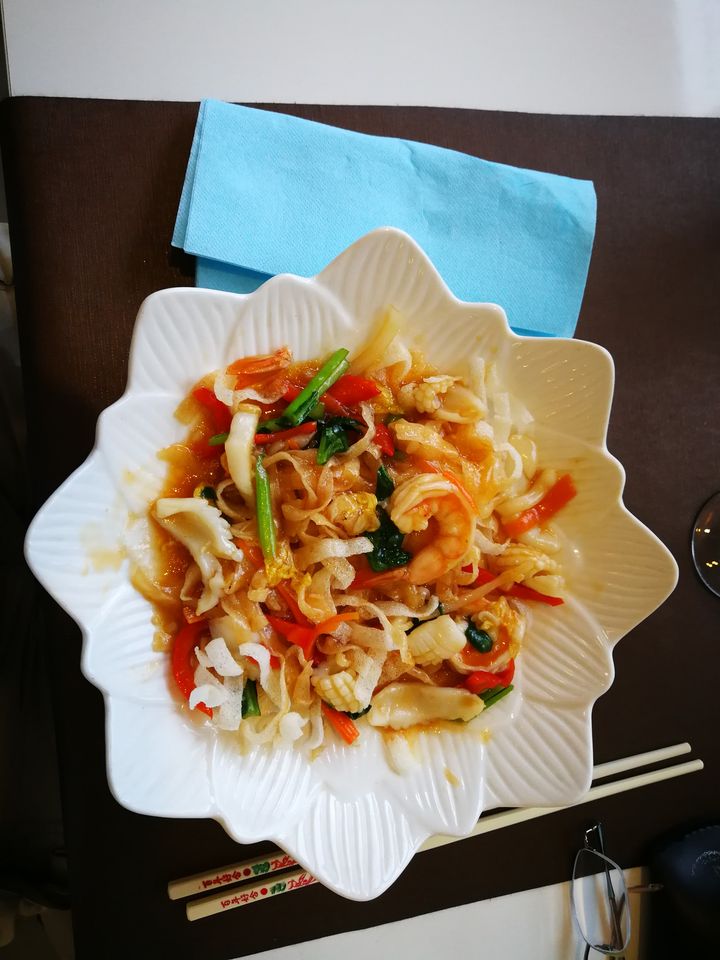 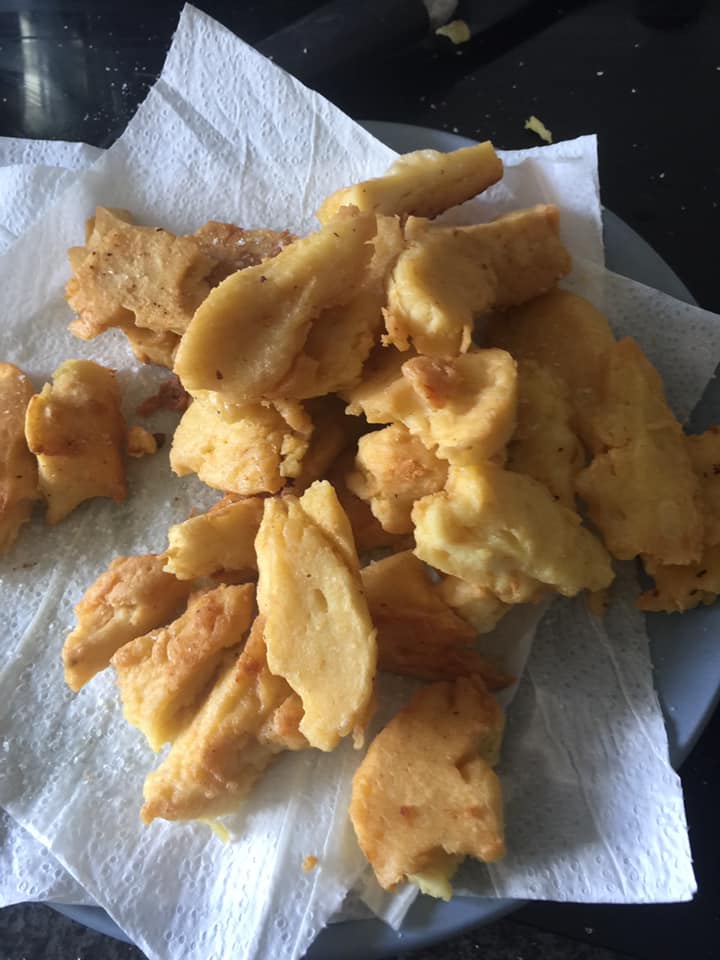 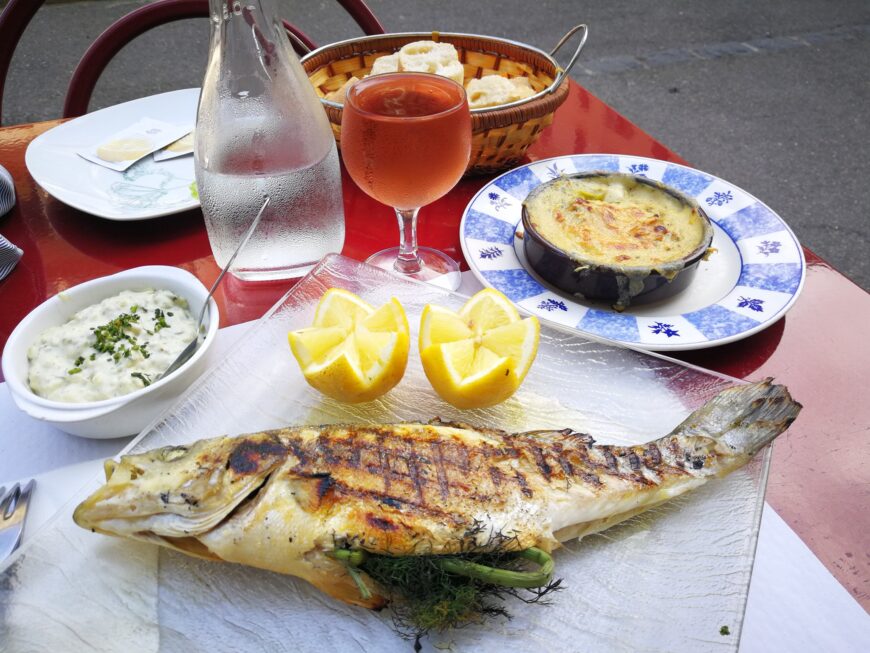 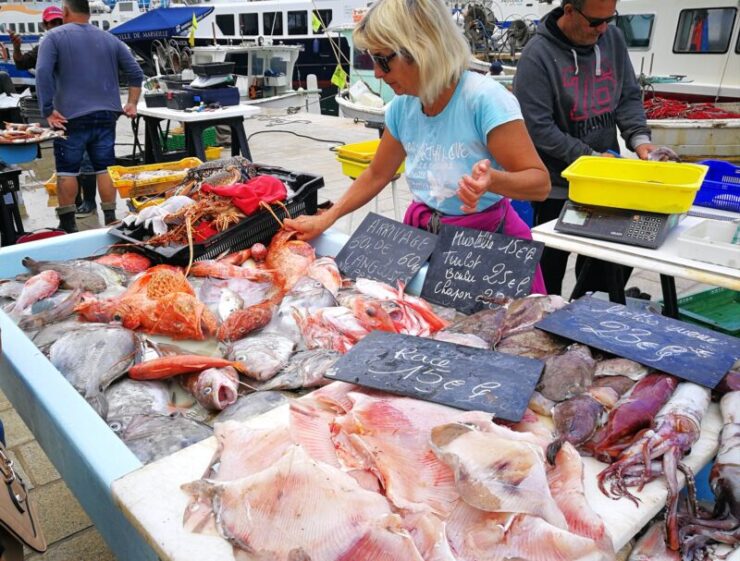 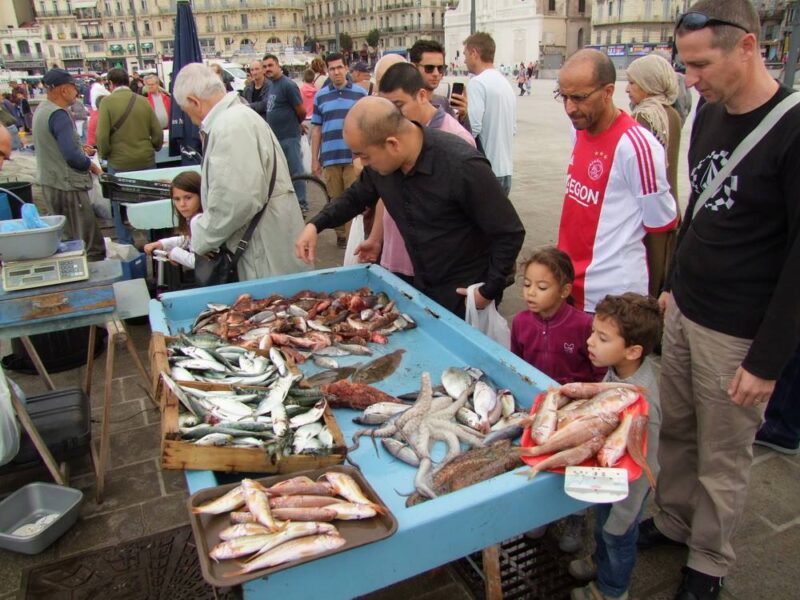 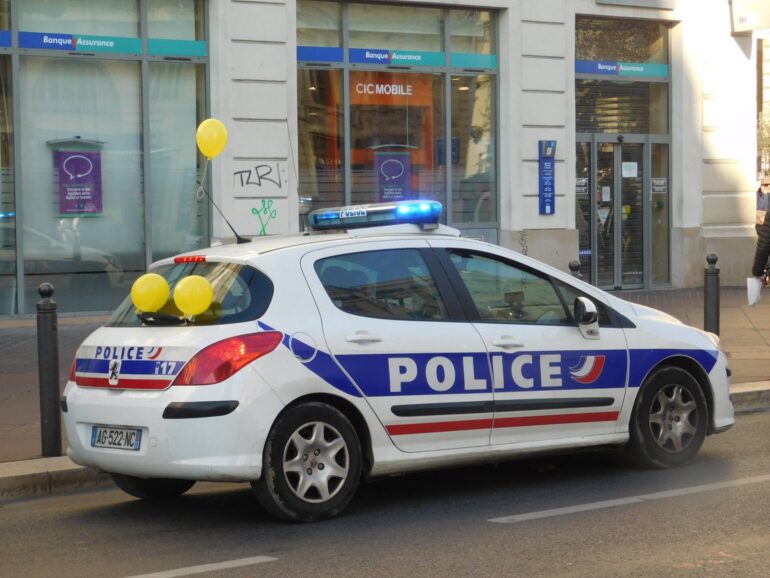 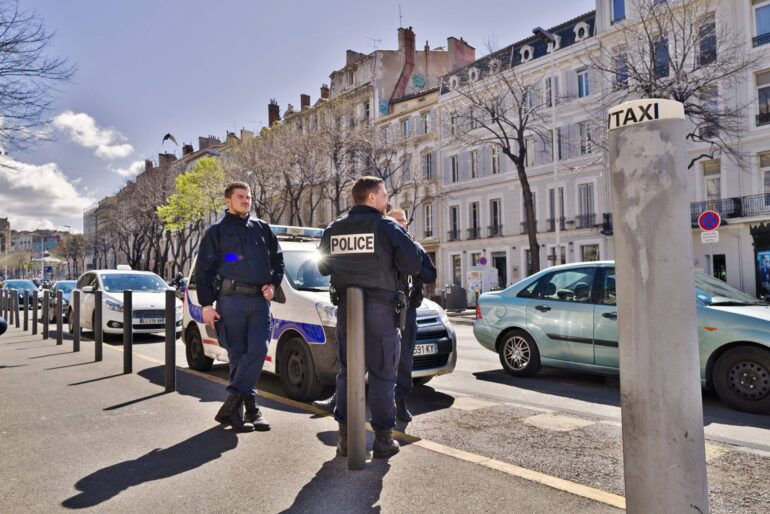 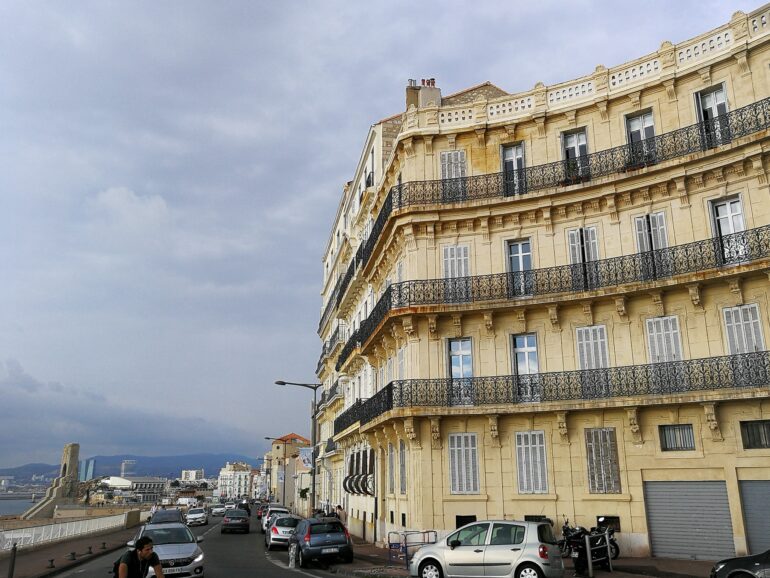 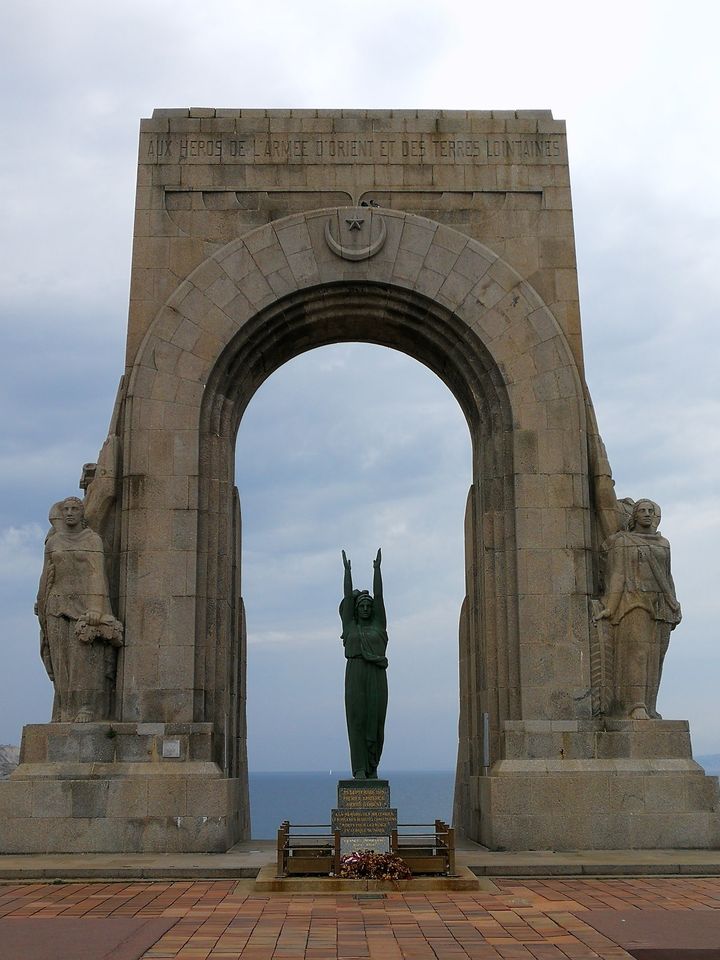 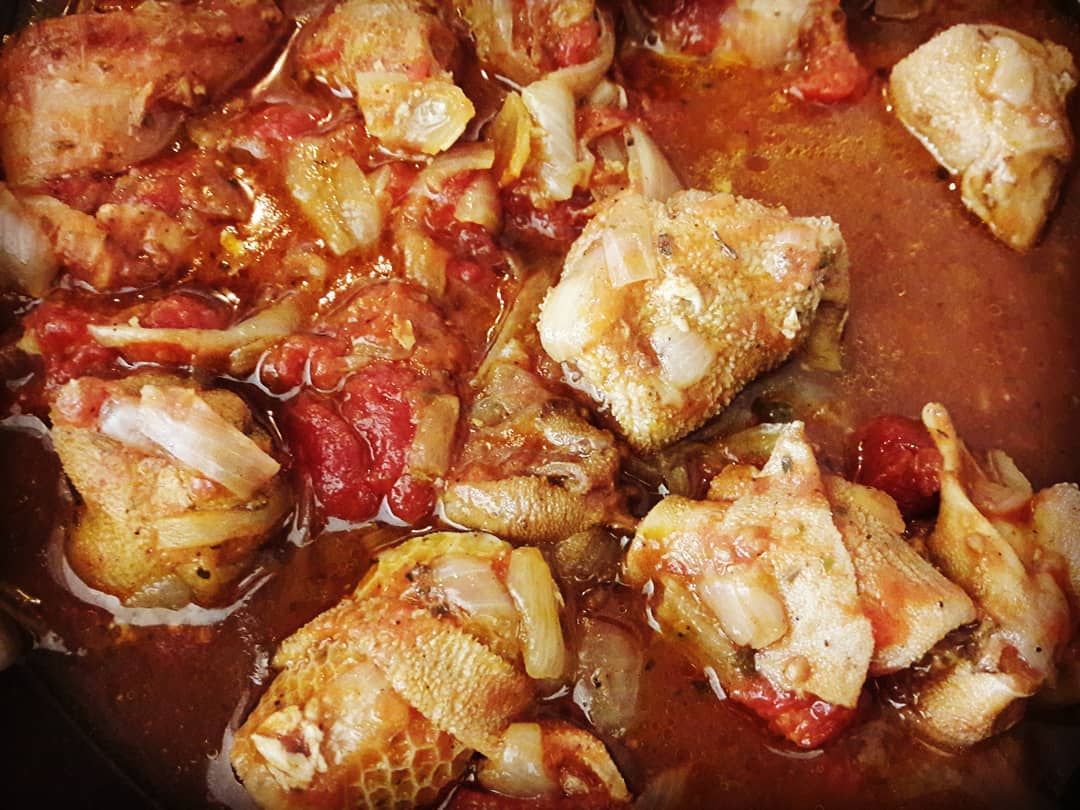 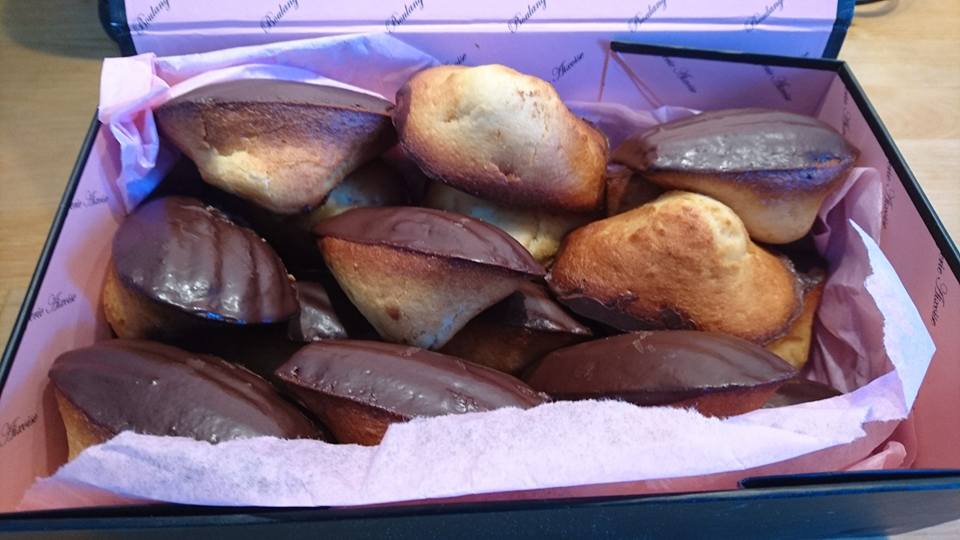 “Marseille has been a port city for thousands of years since the ancient Greeks first landed here in the 6th century BC. Port shipping outgrew today’s Vieux Port in the 1840s, at which time a larger port was constructed further away from the center to handle larger ships.
The Vieux Port has since become a yacht park and tourist attraction, but it is fortunate that it still plays an essential role in its old age and is always a non-negligible income source for the mother town.
The smell is still authentic; only the cacophony is no longer created by sailors but by tourists.
Speaking for myself, I don’t even mind the change – after all, what appeal could I find in an industrial port? Here, in this half living museum, I sense something of aroma and spirit of a bygone age.
Climbing the hill to the left of the harbor, we reached the bastion which protected the port. The church of Notre Dame de la Garde was built here, in a place where a chapel had stood since as early as the 12th century. The fortress that protected the city came later, and since the middle of the 19th century, the cathedral has stood there in its present form. It boasts familiar colors and styles, and as I rummage through my memory, I smile, seeing the similarity to the Duomo of Florence.” 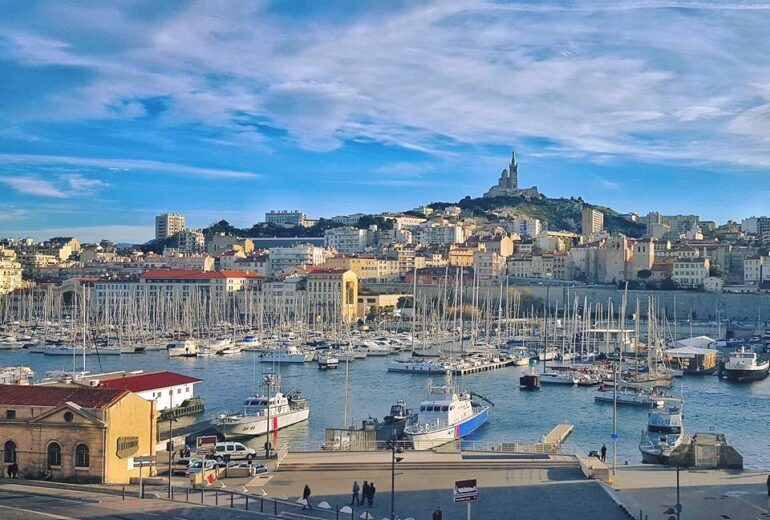 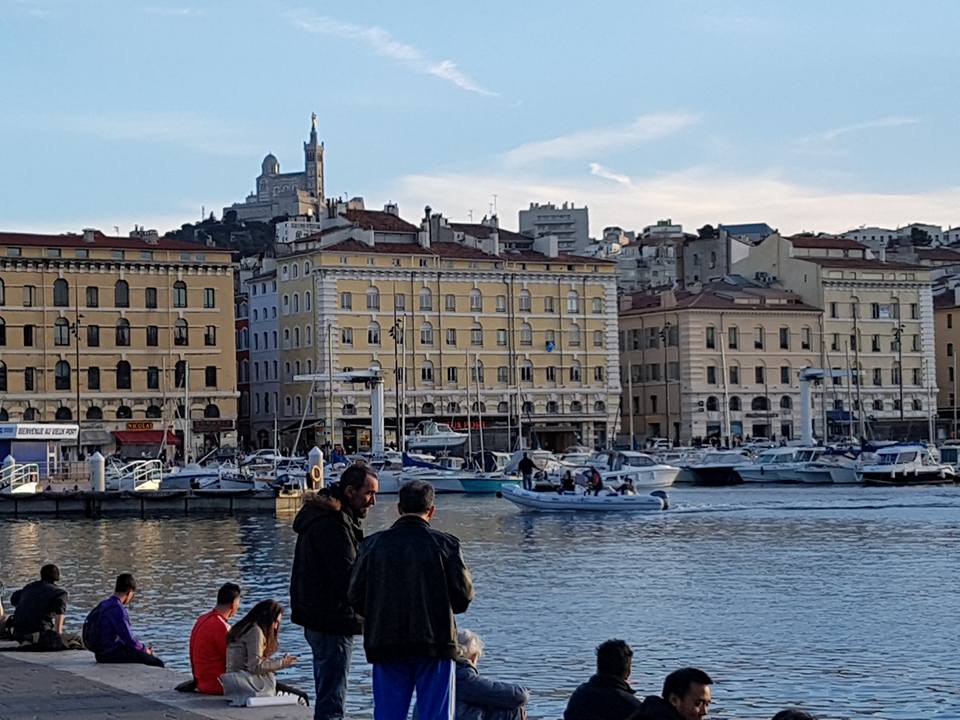 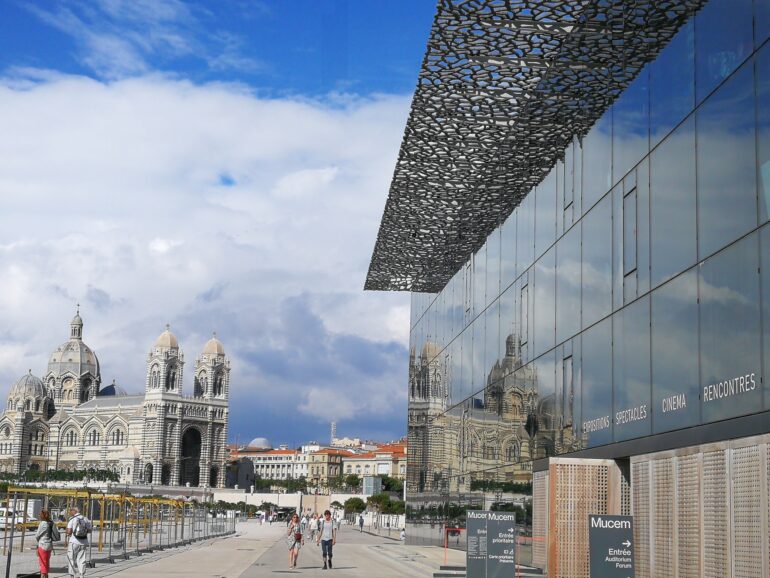 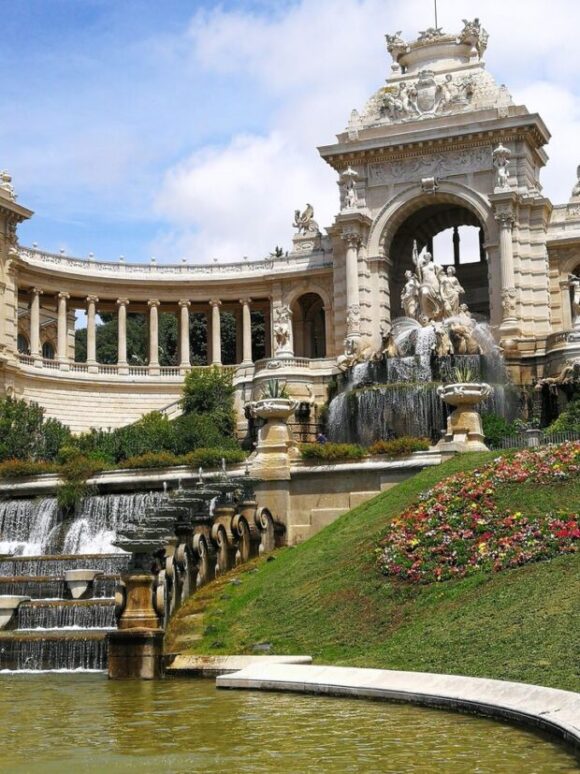 Marseille - The colonnade and fountain of the Palais de Longchamp - r.g. photo 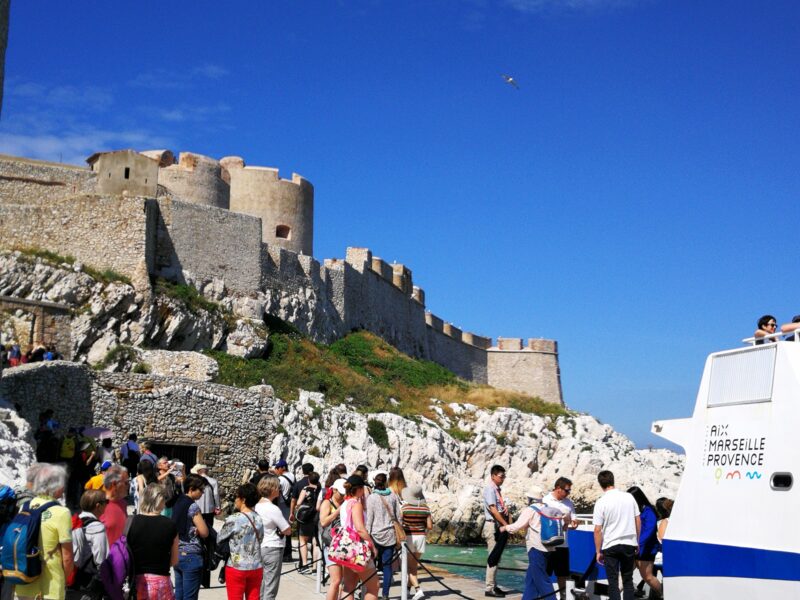 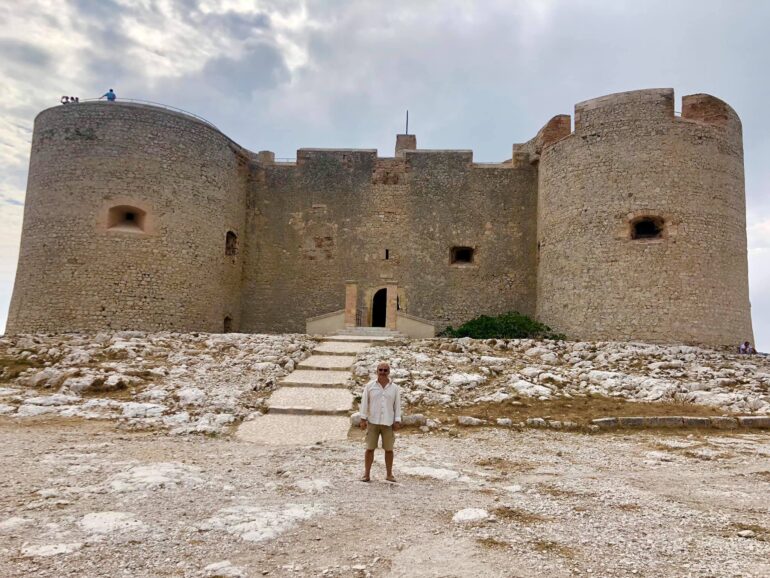 “Tucked away on either side of the Vieux Port is the old town center, which exudes an atmosphere like a fairytale small Provencal town. Narrow streets climb the hill, flanked by sand-colored houses with lavender-colored shutters. Even when the shutters are painted green, it seems that lavender color has still been mixed into the paint. The Provencal countryside colors are incorporated into the houses here, melting humbly into the landscape, the color of rocky mountains and lavender fields. And this is not just a cutesy exterior: children throng the squares of the Panier district, jumping in the fountains and sliding on stair railings, while moms turn their sunglasses face toward the sun and push strollers. A generation of grandparents looks on with a calm smile.

Many galleries have also moved into the Panier district, and artists have followed, bringing yet more galleries. It doesn’t seem a surprise, enjoying the clean Provencal atmosphere: life is slow, neighbors discuss goings-on, and everything is cradled within the landscape, which it also supplies its bounty. Yes, there are still neighbors and neighborhoods here.”