1. The city is full of university students, has a vibrant cultural scene and a great nightlife

3. Easy to discover just walking around - not too big, not too small, ideal for a city break

4. Interesting to see so many nuns, priests, monks (there many churches of course) – the memory of Pope John Paul II is highly respected (he used to be the Archbishop of Cracow)

7. Many tourists but no unpleasant crowds (except in July and August)

8. Locals are friendly, polite – Cracow has not been spoiled by tourism yet

9. The small side streets off the Main Square, the pleasure of wandering aimlessly through the city’s streets

10. Not once, but twice: flap mushroom soup (Poland is pretty good mushroom-wise)

1. Many monuments have not been restored yet

2. Most restaurants that specialize in non-Polish cuisines are mediocre, poor imitations of the real things

3. The many ugly concrete buildings from the Communist era – the Nowa Huta suburb is particularly unattractive

4. More expensive than most Polish cities

5. Many beggars, homeless and drunks

6. Many potholes on the pavements so watch out or you could easily stumble and fall

7. The Old Town is clean but many other districts are not

9. Some street musicians on the main square are a bit too pushy asking money from people seating at the café terraces around

10. One of the top 10 most polluted cities in Europe

12. The unfriendly staff in the tourist information, and an insolent ticket inspector

“Krakow. The last European city where hats are worn as a standard article of clothing, rather than as a style statement. Where the walls still carry the faint, coffee-rich aroma of the Austro-Hungarian Empire – though it’s fading fast. As time passes, the memory of those bourgeois old townhouses fades. Krakow’s unique atmosphere draws European tourists in their droves, which means the city can no longer be considered a budget destination, and most locals have moved out of the city center. The crowds, busy nightlife and, consequently, continual noise, all mean that it isn’t their Krakow anymore.

In fact, the truth is that downtown Krakow has turned into something of an open-air museum, and there are no intimate, ‘local’ areas left. How would a weekend stroll for a family living in the city center look today? Crowds, kebabs, pizza, Hard Rock Café, noise, people shouting obscenities – and of course horse-drawn buggies. These are a particularly quant feature of Krakow’s old town – tourists love them, they generate a lot of revenue and support the livelihoods of their drivers, but they cause a lot of problems too: the coachman is, of course, responsible for cleaning up the horse’s dung, which – more or less – they do. When it comes to the horses’ pee, however, responsibility is less straightforward: What should they do? Mop it up? And it frequently happens that horses stop to deposit several liters, straight onto the pavement on a hot summer’s day. I wonder whose window it will be under this time?

What’s to be done? The income they make is important to the city’s economy. We often hear it said that downtown depopulation is a global trend, and how you view the depopulation of Krakow’s old town is a question of perspective. People are occupying the apartments, after all, they just aren’t the same people as before. They’re tourists. Nor is it really feasible to sneer at the ever-increasing number of hostels that dot the city center, since after all their occupants are what the city lives from. Anyhow, a few locals are sure to remain – there will always be a few “last of the Mohicans” or in this case, Poles.

Five o’clock we arrive at the main station Kraków Główny. It is only 200 meters to our apartment Finger. The owner, Darek, is the archetypical Central European with his twinkling eyes. We take a refreshing shower.
At 19 h we walk southwards to change money. At the Rynek square, with its splendid Cloth Hall Sukiennice, the Tour de France cyclists are welcomed. Then via ul. Stradomska we reach the Jewish quarter Kazimierz and have dinner at Starka, Józefa 14. The walls inside show provincial paintings. It is crowded here. We take lamb, and cakes with spinach and berries. Four little glasses of wine cost us 24 euros: a typical Tripadvisor price.
On the way back home we meet many street musicians: an accordionist plays Vivaldi, a woman sings Purcell, pianola sounds, another woman croons Ipanema in a bar. Tania sees a shop with over a hundred ‘skalka’s’ (rolling pins) to beat me, but she forgets to buy one. We buy a few drinks for our fridge at home, and we are happy the tropical weather has ended.

We circle through the city. In Galeria, the station mall, we deliver our laundry at ‘5àSec’. We buy new batteries for both our watches and we brunch with kiszona kapusta (Sauerkraut) and pierogi (dumplings) with berries.
Planty is a very green ring around the old city, full of trees and meadows with benches. It shows an exhibition of uprisings in Poland and its century of independence. We also see Wawel, the second biggest castle in Europe, where Governor-General Hans Frank had his headquarters in WW 2.
At the little square before the Maria church, somebody paints portraits. An accordionist from Ukraine plays Piazzolla, Bach, Chatchaturians Sabre Dance, and Rimsky’s Bumble Bee. And we meet a family from Cyprus: he teaches Greek, she is a teacher too. On our way back we attend a wedding in a church, with a choir singing. Dinner in the basement of Chimera, Šw. Anny 3.

After a brunch of kiszona kapusta and omelet we head for the National Museum, Aleja 3 Maja, where we see Da Vinci’s ‘Woman with ermine’. This painting had been stolen by the Nazis, but some professors later tracked it down.
Because of the beginning diarrhea, my wife has to return in a quick cab to our address. After her recovery we walk to the station, take our laundry from ‘5àSec’, reserve our train to Bratislava, and dine in a vegetarian restaurant.
That evening we visit Rynek square again, and the Maria church with its enriched interior. In another square, we attend a public singing lesson. Men and women in traditional costumes sing on a podium, accompanied by a public of hundreds of others with a little cardboard hats on their heads. Elsewhere in a restaurant two elder men, a pianist and a Stehgeiger, play Hungarian music. We end the day with baklava, bought at the kebab shop next to our apartment.

A lot of good bicycle paths along the river Vistula and in the city.

“Anyone looking to eat well and enjoy themselves will find themselves right at home in the Kazimierz, the old Jewish quarter made famous in the film Schindler’s List. This district, which combines run-down charm with a certain hipster chic, is not only worth visiting for its synagogues (though these should definitely not be missed) but also for its bars and restaurants. Over the course of a few days I ate delicious Italian pasta, Thai curry, and Polish dishes, though sensitive stomachs should beware the latter. Almost free of sides or garnishes (maybe a few fries or a little pickled cabbage) the rest is a real meat feast, mostly roasted or fried in lard, and after finishing a meal I could hardly move.

Polish beers are pleasantly light, and in their range of vodkas they can almost compete with the Russians. The Jewish market (Plac Nowy) is a cheerfully ramshackle flea-market with food stalls (try the pierogi) and in the evening the whole quarter buzzes with nightlife.” (2018) 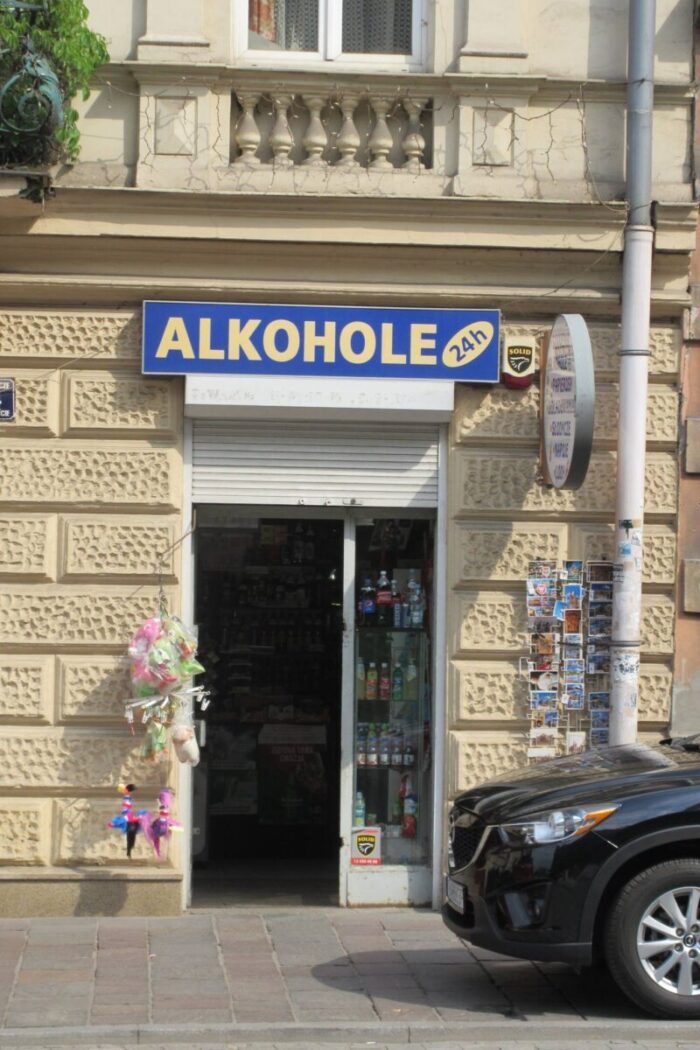 Cracow is pretty safe in the tourist areas at any time of the day or night. There may be drunkards (tending to be English youngsters), but is not too embarrassing.
There are some pickpockets in the tourist crowds. Outside the well-lit places, in darker alleys, there are muggings heard of rarely, so stay away from them. 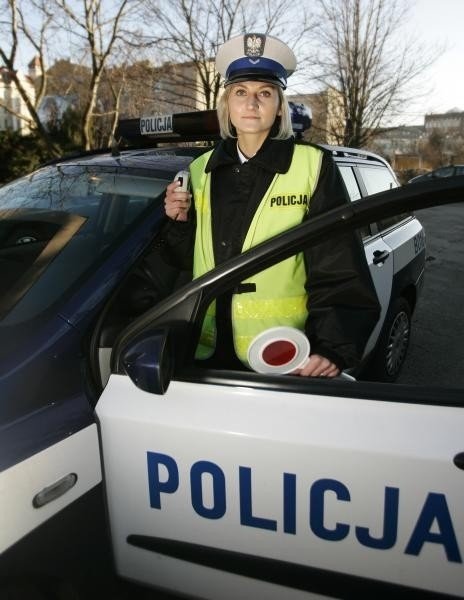 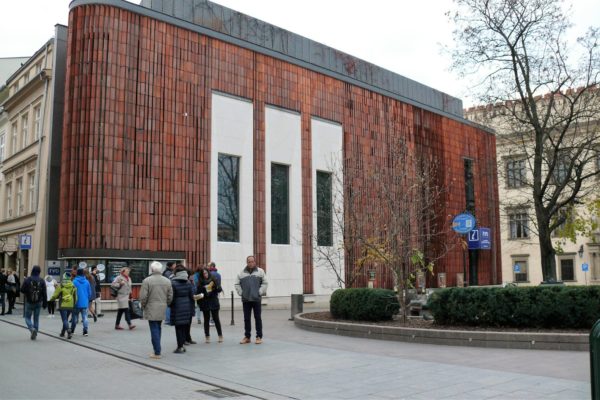 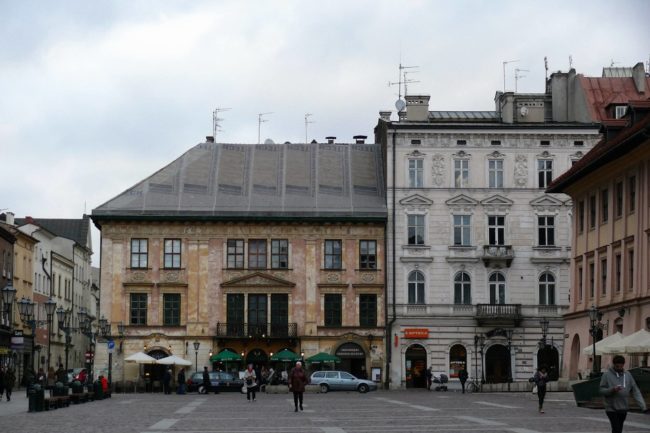 Surnames come in two variants - they are practically the same, but the suffix depends on whether the person in question is a man (e.g., Kowalski) or a woman (e.g., Kowalska). The others (e.g., Nowak) are not gender-inflected, meaning the form does not change depending on the person's gender.

It’s forbidden to feed pigeons in Cracow. Locals loathe them, no wonder why. They are dirting on the balconies and snatch food. 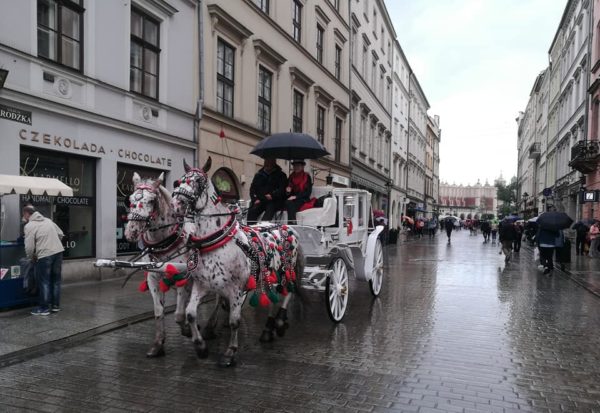 1. Do not drink alcohol in the streets other than designated seating area outside a bar/restaurant, 25 USD fine otherwise. 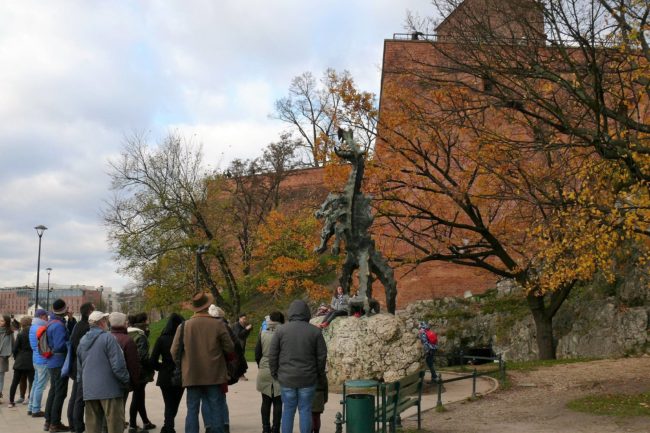 Krakow - Wawel Dragon statue (at the foot of the Wawel Hill) - z.k. photo 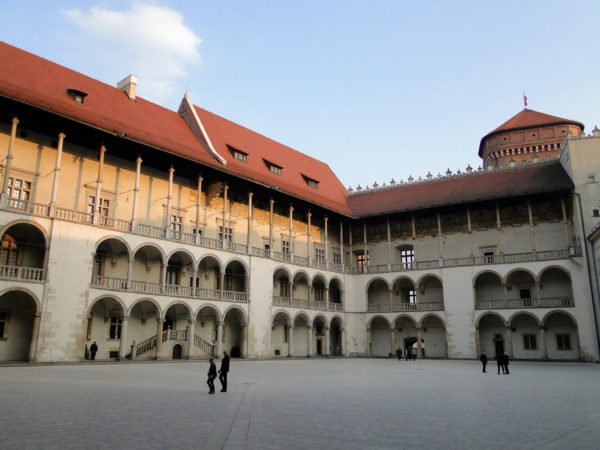 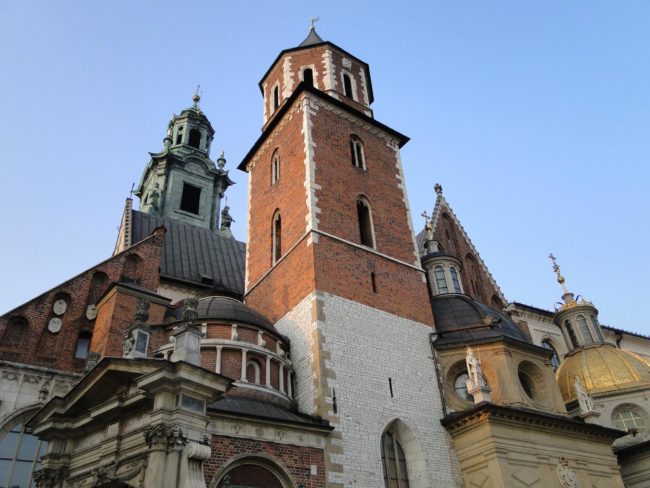 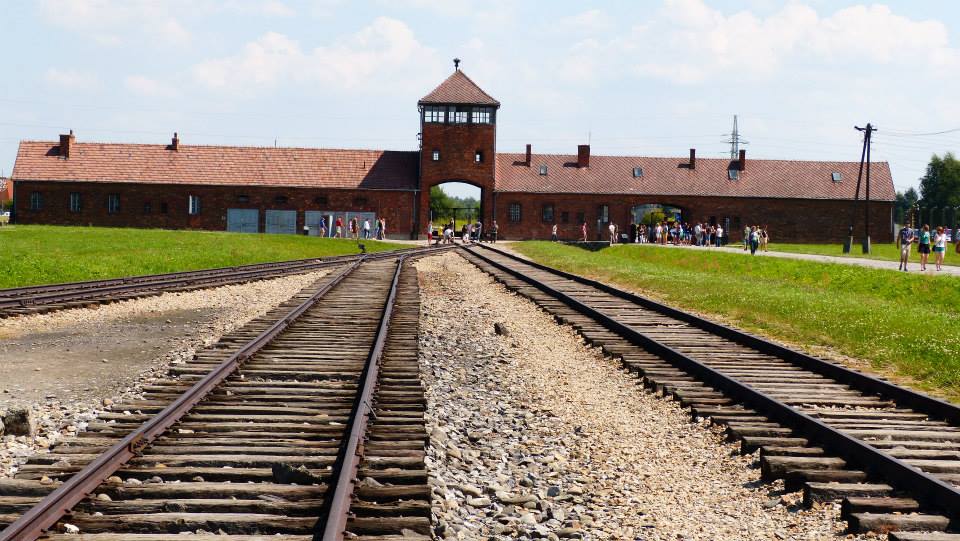 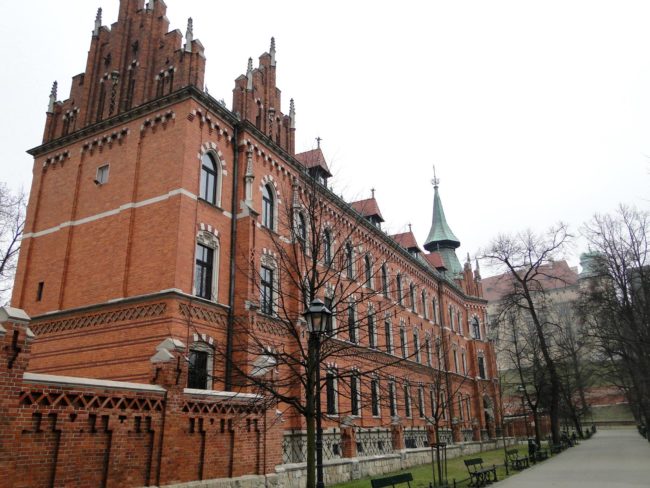 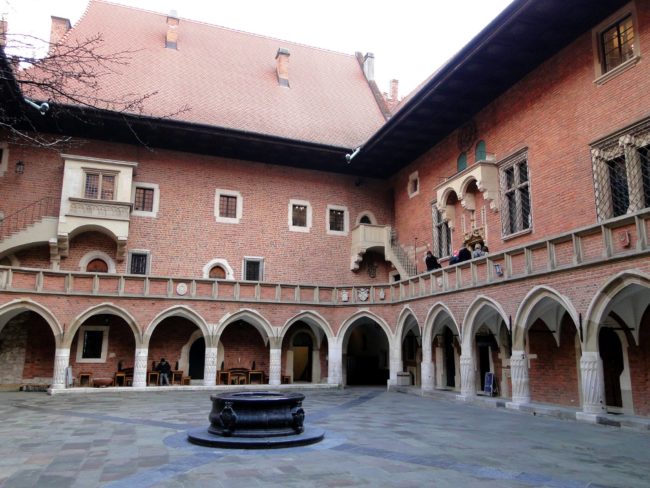