1.    When it comes to seductive cafes on the Main Square (Rynek Glówny) of Krakow you’re spoiled for choice
2.    Malbork brick castle
3.    The beautiful red-brick walls of St. Elizabeth's Church in Wrocław
4.    Brilliant reconstruction of old Gdansk (around ul. Duga)
5.    The joyous ways Poles celebrate
6.    The beauty of Polish girls and women, the traditional gallantry of Polish men
7.    The Wawel in Krakow
8.     Retro milk bars
9.     Fun to see locals drink beer with a straw
10.   The very interesting photos in the Galicia Jewish Museum in Krakow

11. I met the challenge of correctly pronouncing the famous Polish jawbreaker line (originally from a children's poem): W Szczebrzeszynie chrząszcz brzmi w trzcinie (means: In Szczebrzeszyn, a beetle buzzes in the reed).

1.   Every Polish city is ungraced by the huge, concrete housing estates from the 60s-70s (,,commie blocks")

2.    The ill-mannered service people (especially train ticket inspectors and shop sales clerks 3.    The unchanged ugliness of The Palace of Culture and Science in Warsaw
4.    Infrequent sunshine and unpredictable weather
5.    I was not won over by the delights of Polish cuisine
6.    Too big a country to discover in one visit
7.    The stink of cigarette smoke in too many places
8.    In spite of significant progress, Warsaw is still a bit charmless
9.    Streets in many cities are deserted after 9pm
10.  The sight of Poles eating pizza with ketchup

1. Going to church is unbelievably popular in Poland! Not only old people, and not only on Sundays. I’ve been to church a few times back home, of course, but in most parts of Europe the ‘congregation’ is just a few elderly ladies, and most of the pews are empty. Here, by contrast, if you decide to attend a mass, you have to consider whether you’re likely to get a seat, or whether you might just have to stand, even on a normal weekday.
Young people, couples in their twenties and thirties, groups of friends, young groups of girls and boys, and families with small children, all go to mass together. For them, this is a normal activity before/after a movie, excursion, shopping or meeting friends.

2. It’s also striking how often Poles go to the cemetery. At first it surprised me that they go to see their deceased loved ones several times a week, always with candles and sometimes with flowers. After staying a few minutes and saying a quick prayer, you can go on your way.

3. Poles like to get married, and so far as I can see they do so at a much younger age than elsewhere in Europe. The normal age to get married seems to be about 25, but these are not hasty decisions, as many couples have been together for five or six years by this point.

4. If you think the British drink a lot of tea, wait till you see the Poles! They stop for a cup of tea at least three or four times a day – I think sometimes just out of boredom. Always black, and they don’t seem to go in for green tea or herbal teas.
If a visitor arrives, they’re never offered a soft drink and a cookie, like you might see back home, but always tea or maybe coffee with a little plate of assorted sweets. Oh, and the tea is served so hot that to this day I still haven’t learned how to drink it with them without burning my tongue.

5. I can state with confidence that the most popular food in Poland is the sandwich. The breakfast sandwich is such a staple that they don’t seem to consider any other option, and dinner is often the same.
Every single breakfast, every single day… So if you’re going to be spending some time in Poland, and you’re not the world’s biggest sandwich fan, it might be a good idea to bring along some muesli or porridge oats, just so you can work in a little variety.
I haven’t worked out the reason for this yet, as there are lots of great bakeries selling great, tasty pastries.

6. Poles love to walk, and interpret a distance travelled in this manner quite differently to how I usually would. If a Pole says “it isn’t far, we can go on foot”, I interpret that as meaning a 5-10 minute walk, but in reality I shouldn’t be surprised if the walk takes at least 30 minutes.
This is healthy, of course, and it’s good to walk in the fresh air, but I had to get used to the fact that they often choose to walk 2-3 tram stops rather than wait. After all, it’s good to walk, sometimes for hours, which is maybe why they’re also so fond of hiking in the woods and picking mushrooms.

7. If you accept an invitation to visit a Polish family and are offered a slice of cake (or whatever else) upon arrival, be careful how you thank your hosts. If you:
a) would like some cake, then first take it and only then say thank you.
b) if you don’t want cake, just say “thank you”.
Yes, it sounds a bit illogical, but just saying “thank you” is interpreted as “thank you but no thank you”. If you want some, you have to wait until the item in question is safely on your plate before expressing gratitude.
I often broke this rule out of habit, saying “thank you” when food was proffered, and then seeing it whisked away, my hostess saying she wasn’t very hungry either…
-->

Refuse to drink alcoholic beverages offered to you for free in front of nightclubs. These drinks may contain drugs causing temporary memory loss, enabling easy theft of your money and credit card. 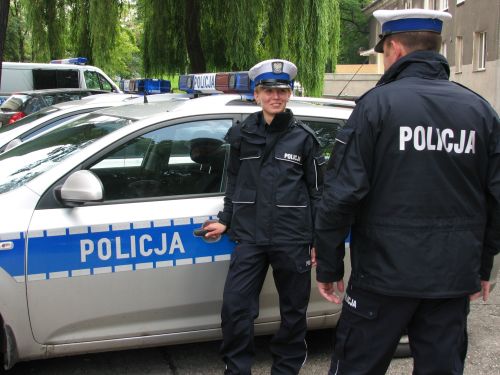 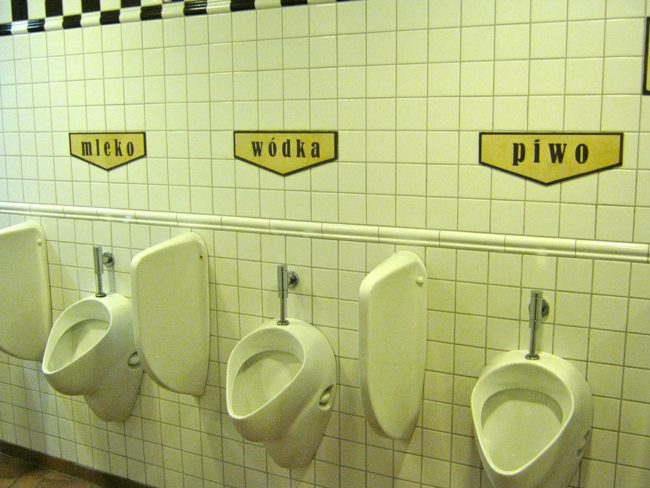 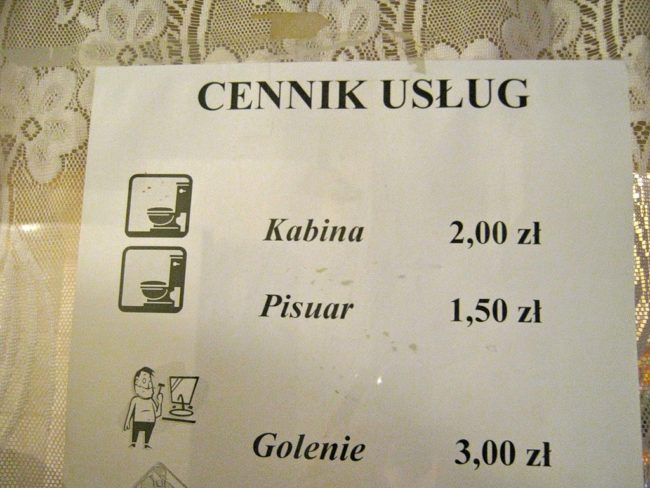 Poland - Public toilet prices for cabin, for pissoir and self-shaving 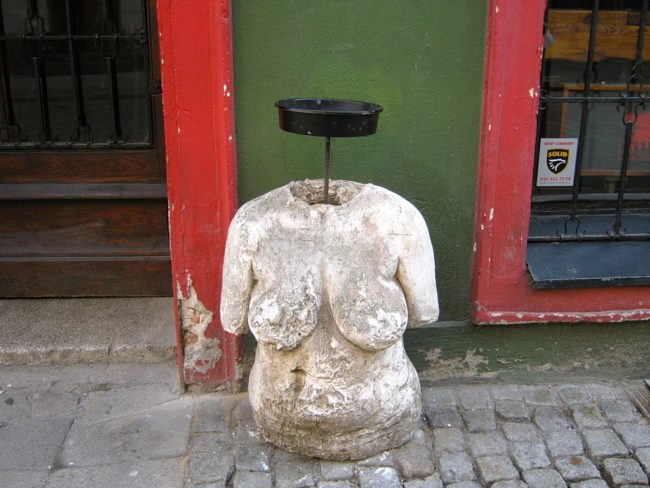 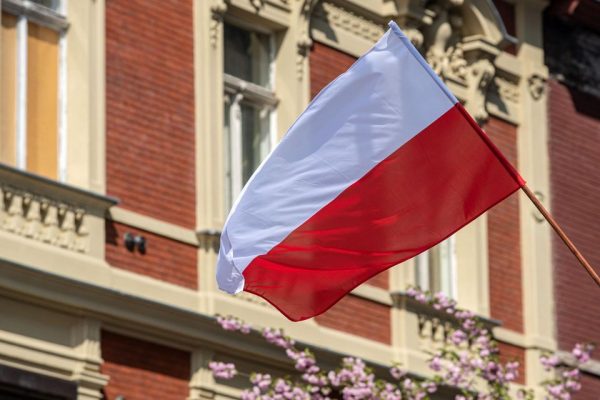 Population: 37.8 million (2020) – Polish people put ketchup on their pizza, which is considered an absolute sin for many non-Poles.

Poland is member of the both the European Union and NATO.

Currency: zloty (PLN) – “Zloty” is the masculine form of the Polish word for “golden”.

“’ Are you a Pole?’
The Poles had a king who grew to be very short in stature. In addition to his height, he was also associated with cruelty, so as in mockery he was known (behind his back) as “Bloody Elbow-High.” He introduced the pleasant custom (many Germans being then resident in the country) of compelling anyone encountered to say four words in Polish, from which, based on the pronunciation, it could be determined whether one was dealing with a true Pole or a German. Those who failed the test were put to death. About 12,000 people were executed in this way. We also took the test on the spot, and while some people failed miserably, my pronunciation was apparently quite acceptable.

The cemetery next to the Kraków Cathedral has done well by those who were put to death in this way (among, of course, many others) – today there is a small square here with a chapel-like structure. The large church is Polish and the small one is German. At least that’s what everyone thinks, our guide says: in reality, it's the other way around.”

“Going to church in Poland: It must feel amazing to go to church! Not just on Sundays, and not just among the elderly. I also went to church a few times back home in Hungary, where one or two older ladies made up the ‘congregation’ and most of the pews were empty. Here, however, if one decides to attend a Mass, expect crowded benches, and sometimes there are no free seats, even on a weekday.

Young people, couples in their twenties and thirties, groups of friends, young girls and boys in groups, and families with small children, all go to Mass together. For them, this is an average casual program before/after a movie, a trip, shopping, or meeting with friends.” (2019)

Southeastern Poland is by far the least developed part of the country. Lubelskie is the poorest region, and the central-eastern Mazovia Province (Mazowieckie), around and in Warsaw is the richest.

"We Poles really like the Czechs because they’re good-humored, have good food, and are just generally good people. We find the Czech language funny, as they do ours. We don’t have any particular attitude towards the Slovaks. We don't like the Russians because they are scoundrels and drunkards (although many According to Russians, Poles drink even more.) We no longer hate the Germans, but we’re not overly fond of them either. We acknowledge them as our neighbors, but don’t take much notice of them, though we respect them to a degree for their economic achievements. Sometimes we hear from older Poles that, all the same, when the Germans were here during World War II they brought order. That's always a bit embarrassing to hear. The Germans come to Poland because it is cheaper for them to get a haircut, visit a doctor, or just drink in a pub, and they are allowed to smoke in more places. We go over to Germany to buy used cars more cheaply. Given all these mutual benefits, there isn’t as much animosity in our hearts, on either side. Anyway, we have a lot of jokes that start with “A Pole, a Russian and a German walk into a bar…” In these jokes, it always turns out that the German is the dumbest. Which is weird.” (Witold from Poznan, 2017)

1. Do not litter! One of the exemplary qualities of the Poles that they are disciplinary about that. There are trash cans everywhere. If you litter in public spaces and anyone spots you doing that, you can expect rude reactions by the passers-by.
The law is strict. A typical fine is 200 PLN (about 53 USD), but much more if someone litter in a forest or national park. 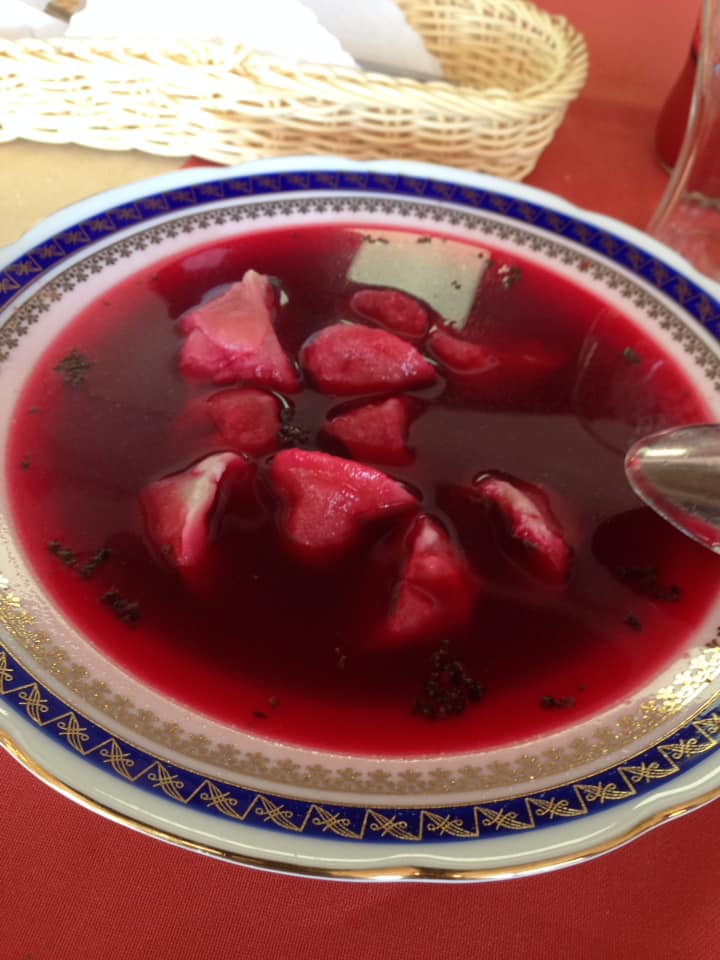 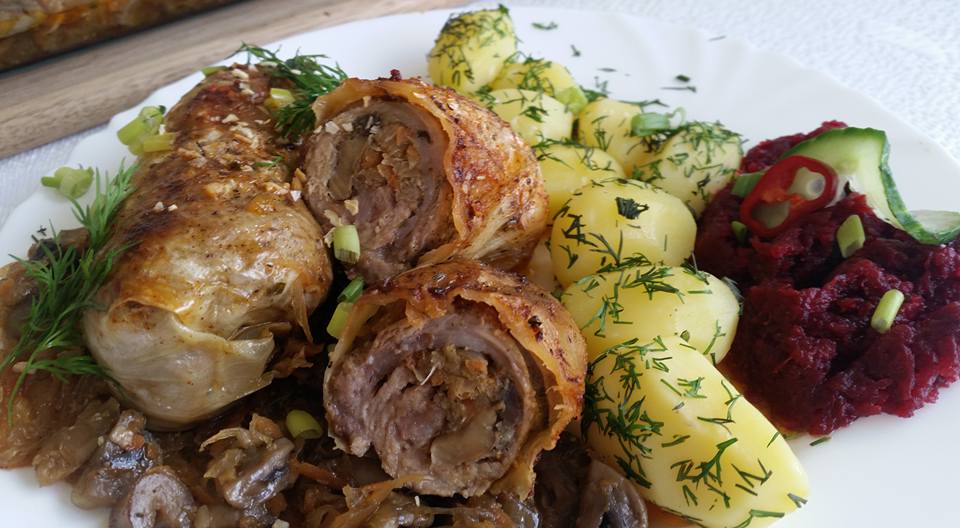 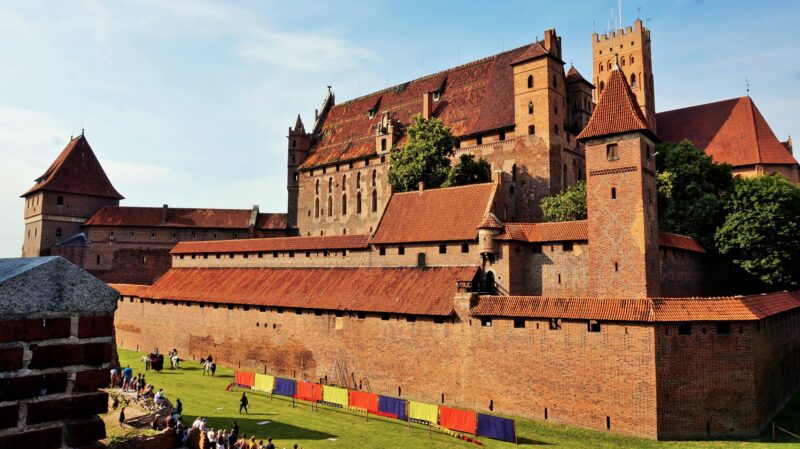 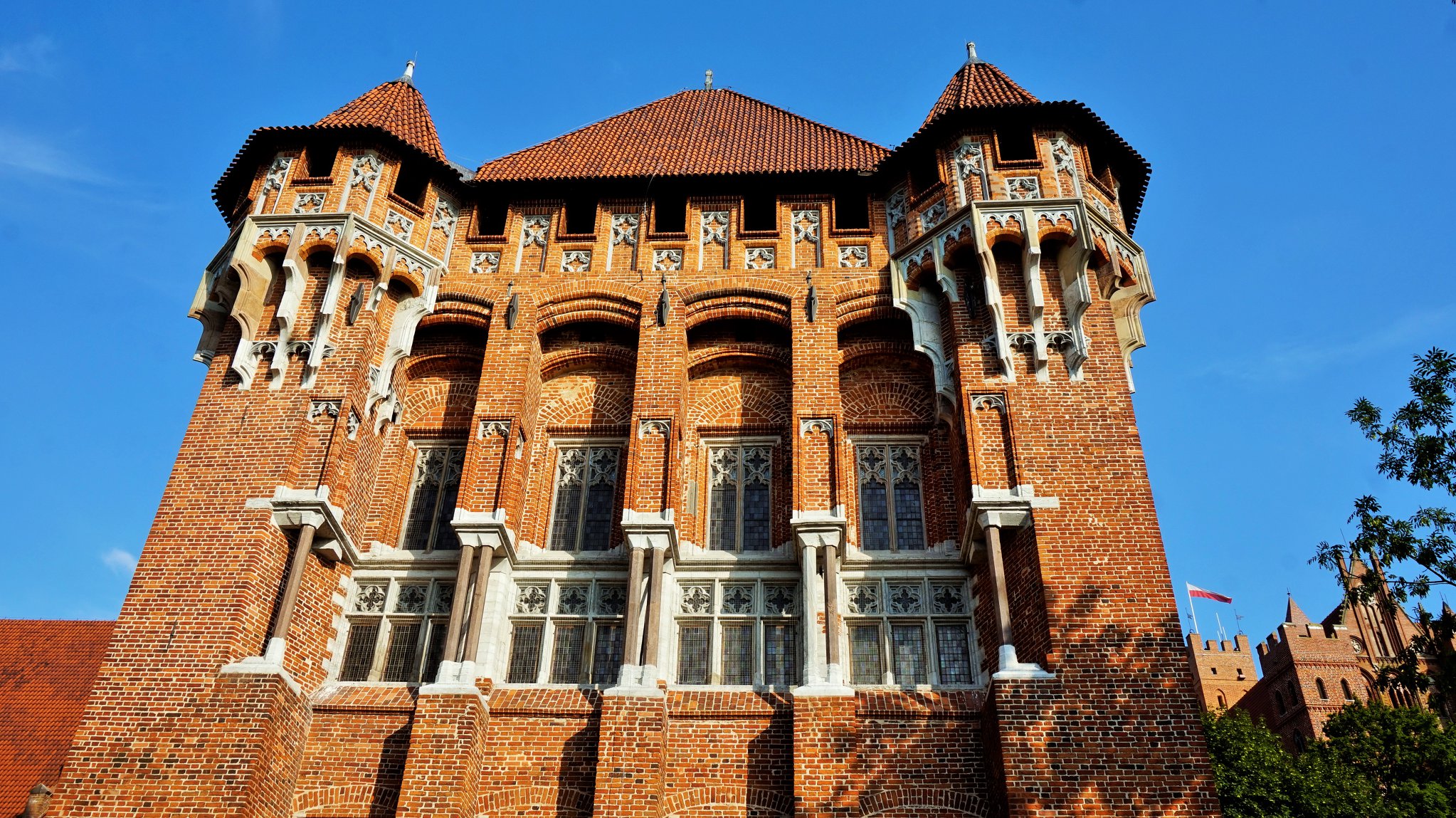 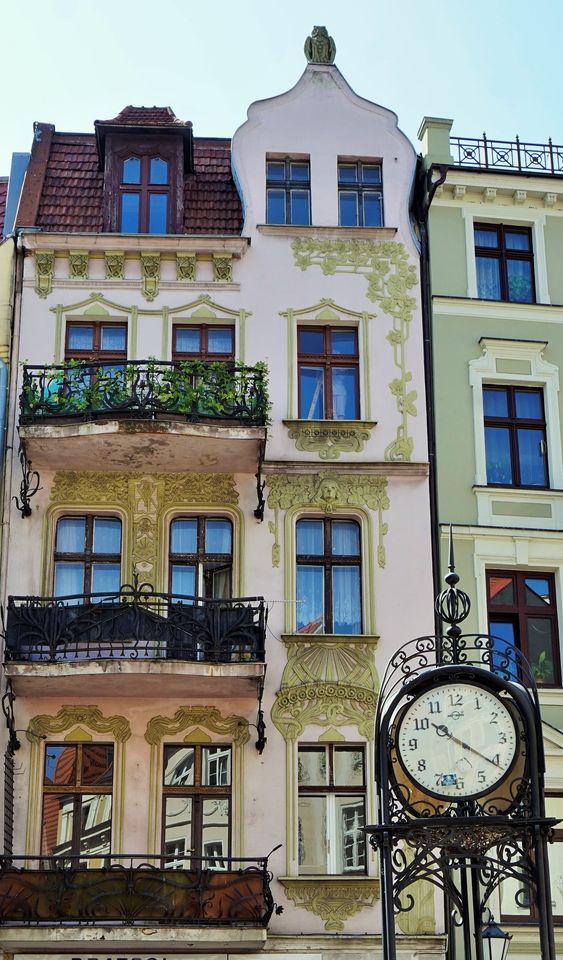 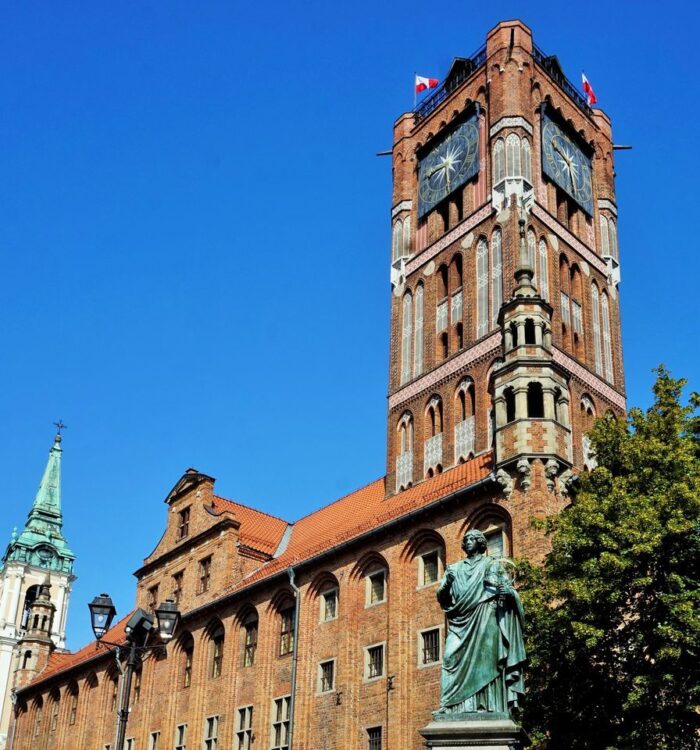 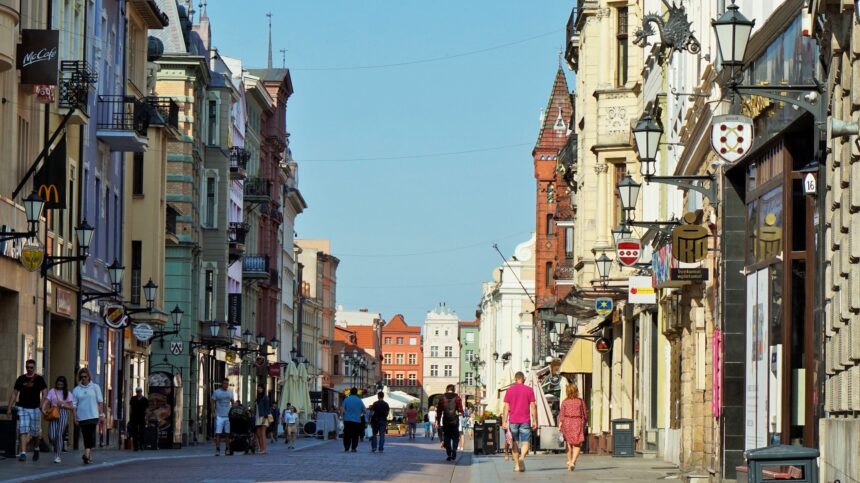 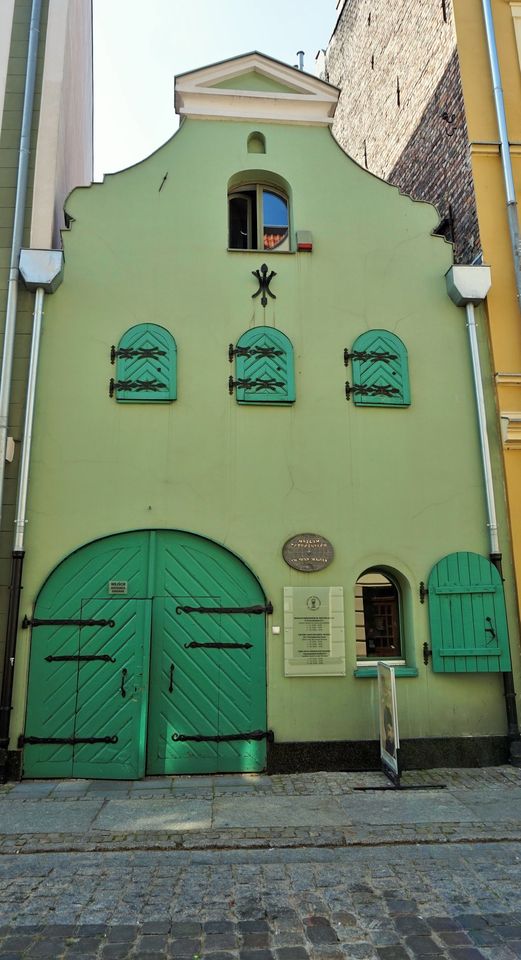 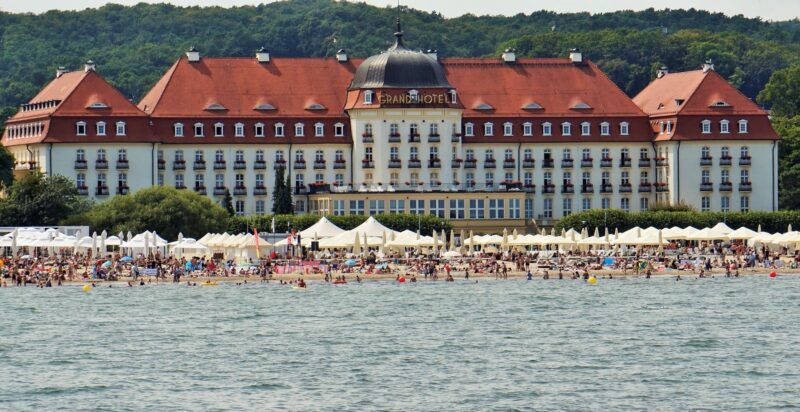 Sopot - beach along with the Grand Hotel - a.t. ma photo 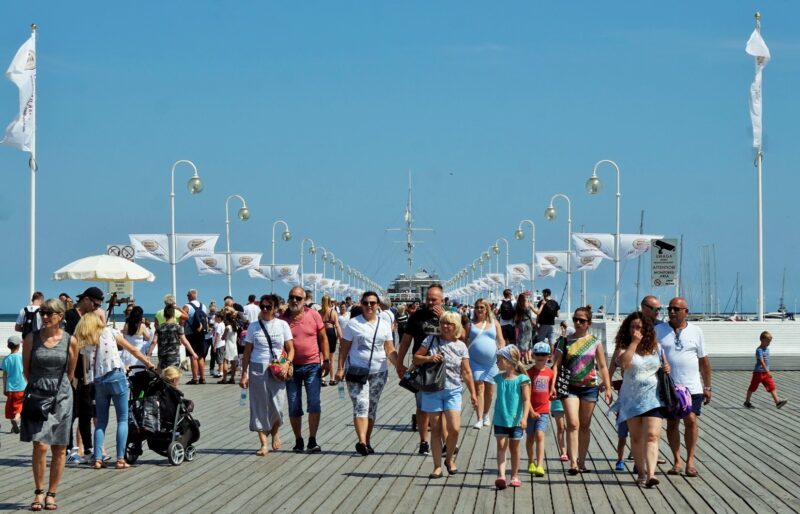 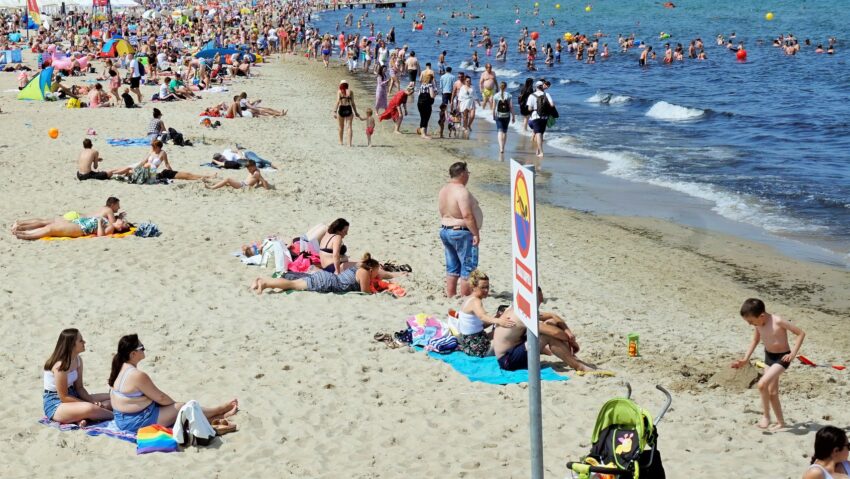 Sopot - beach - at the end of the summer