1. at arrival, having a high expectation and then see wrecked cars, wasted fridges along the road from the airport to Fira (you don't see such things if you come by boat)

2. In Fira, donkey shit piled next to supposedly romantic stairs - it has no rose scent 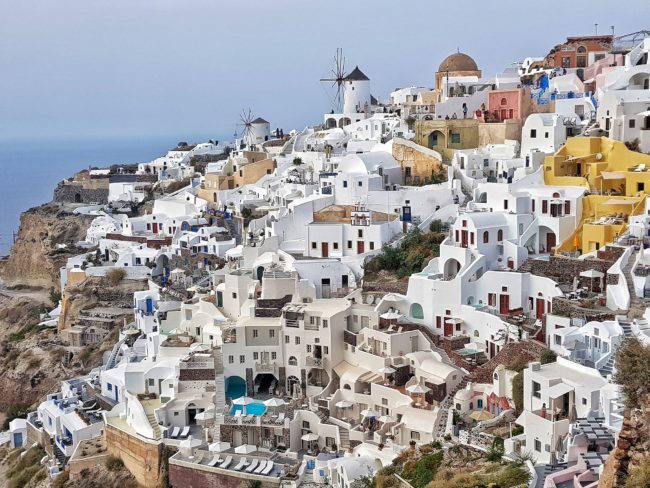 The strong contrast of the dazzling white houses built on the edge of the black volcano is softened by cyclamen-colored flowers and blue domes. It’s like being dropped into a fairy tale. The coasts are not sandy here, but lava rock and the volcanic sand mean that the beaches are black and rather narrow. The streets of the island’s capital, Fira, are lined with shops, restaurants, bars, and nightclubs. Prices in shops and restaurants are twice as high as on Crete. Hotel prices are also very high, and there are few bathing places – only a few hotels have swimming pools.

There’s a lot of traffic at all times of the day. The city is characterized by endless floods of tourists arriving by bus. Buses take tourists up from the port, but on the way back down you can also choose to take a glass cable car or ride on a donkey.

The beautiful town of Oia on the northern tip of the island is especially famous for its sunsets. Many visit to enjoy dinner with a spectacular view. The views are spectacular at any time of day, however, and from almost every point on the island! (2017)

“Santorini - the incredible nature
Our boat reached Santorini at 8 in the morning, it was a fantastic sight as we sailed into the partially sunken caldera of the former volcano. From the boat, it didn’t look as though people could live in such a barren, volcanic landscape, let alone grow grapes, though the archipelago is famous for its wineries.
As we drew closer, we could see ever more clearly the many white buildings, indeed whole settlements, stretching along the top of the cliff.
Even the new port is unable to accommodate ships the size of ours, so instead, we dropped anchor in the middle of the bay, alongside two other cruise ships of a similar size, and from there they were taken ashore on small boats. Since there was a strong swell at the time, our little boat swayed a lot as it sailed towards the shore.
The new harbor has been constructed at the south of the island, and from there a bus took us up the dizzying switchback road cut into the almost vertical cliff face. Many did not even dare look out the window.
As we reached the top, we saw that the outer half of the once gigantic crater was a huge sloping hillside with many smaller settlements, vineyards, and even an airport.
Our bus took us across the top of the caldera to the north of the island, which is almost entirely built up, with a multitude of houses all painted bright white.
It was dizzying as the huge buses raced along the narrow streets, passing one another with just centimeters to spare.
At the top of the caldera, we stopped in two places and could walk through the narrow and charming streets of the villages, where there are plenty of shops selling souvenirs for tourists. Almost everywhere there was a fantastic view of the sloping hillside and the more distant islands on one side and on the other side the rest of the giant caldera, with a few barren islets in the middle of the bay. From up here, even the giant ships waiting in the bay looked like toys.
According to our guide, this was once a large island that collapsed about 3-4,000 years ago due to massive volcanic activity. The sea flooded the volcanic crater which formed in the middle, engulfing much of the other side. It is said that archaeologists have even found the remains of settlements under the sea ...
The bus trip ended in the old capital of the island, from where we wandered on foot between the shops and cars, then made our way on foot, down through the narrow streets to the old port, where little motorboats were waiting for us. To get down, you could choose from two options, either line up at the seemingly endless queue for the chairlift or go down the 600 steps on foot. Those of us who chose the steps didn't get down much faster, however, and sometimes we have to avoid donkeys and their stinky poop on the steps. A more civilized solution might be to clean the steps regularly.
While we were still at the top of the steps  (at a section the donkeys don’t walk past) we went into a small restaurant where we were charged about €100 for some grilled fish, a salad, and four glasses of white wine.” (D. A, 2018)

What should you look for in Santorini?

1: Be aware that in some parts of the island (such as Oia) it’s not enough to find a hotel with a sea view. You also have to make sure that the view isn’t looking in the wrong direction.
Simply put, accommodation is generally along the crest of the caldera, so it might have a view in precisely the opposite direction – so not in the direction of the sunset, the bay, and the blue-domed churches, but in the more “commonplace” direction. Be careful, check the pictures thoroughly before you book, and read the reviews!

2: Think about how you will get to your accommodation. Do you need an airport/harbor transfer?
(Buses and taxis also go out to all boats and planes, so don’t worry, you definitely won’t get stuck there, but if you travel with a lot of luggage, it can come in handy if there is a transfer to the accommodation)

What are the pros and cons of getting a beautiful view?

1: Accommodation on the caldera side is at least double the price elsewhere on the island
2: You can ‘only’ swim in the pool (and they certainly don’t change the water every week)
3: If you don’t rent a car, transport can be a problem
4: If you do rent a car, you have to park it somewhere when you’re not using it, and not all hotels have their own car park (of course there are exceptions, see below 🙂)
5: In places with really good views, hotels and hotel rooms are usually crammed on top of each other. (see image below)

1: For the price, you get a view you will remember for a lifetime!
2: Hotels on the caldera side are generally much better.
3: These are small hotels, mostly family businesses, and for the most part they take great care to ensure that guests leave satisfied.

Are there any that have both a great view and a beach?

There are no, or at least very, very few hotels that face the caldera side and yet are within walking distance of a beach.
The coexistence of the superb panorama and a beach is not common, because the side facing the volcano is basically a cliff all the way around. The volcano erupted thousands of years ago and its center collapsed, which is what makes Santorini so special. 🙂 (I know of only one place that has the super view + beach combo – see below)

Are there any hotels that have a great view and are not too expensive?

There are! While you won’t usually get the full panorama and probably won’t have your own jacuzzi on the patio, it may be in a secluded location, so you need to make some slight compromises. Of course, you might also be lucky enough to get top-class accommodation for a low price. 🙂” (2018) 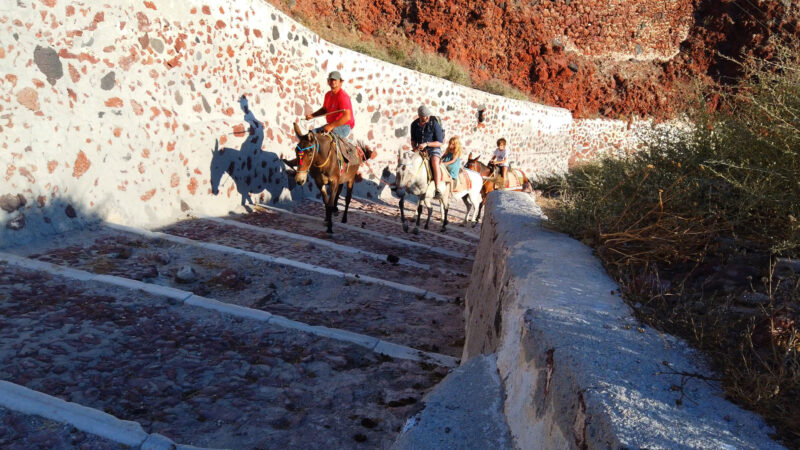 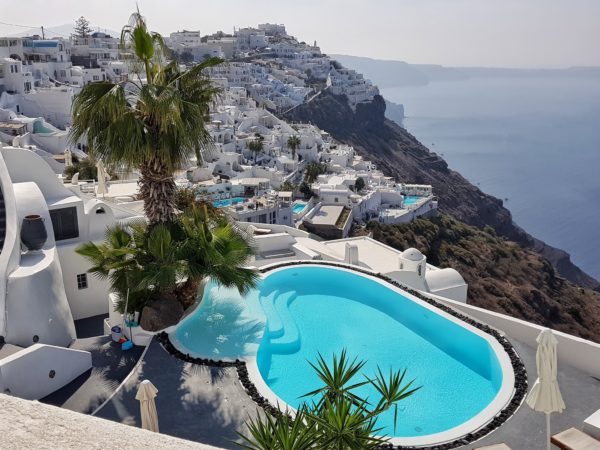 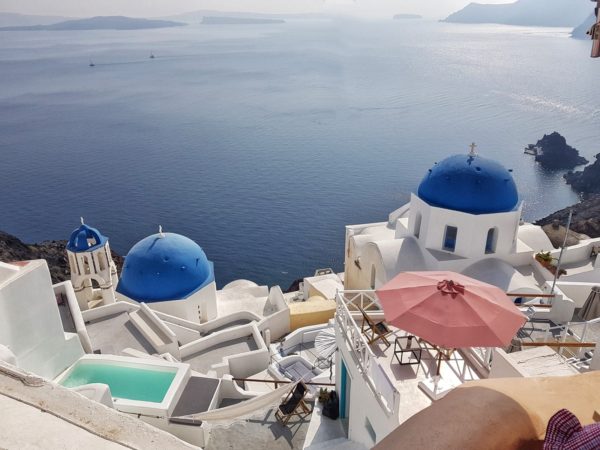 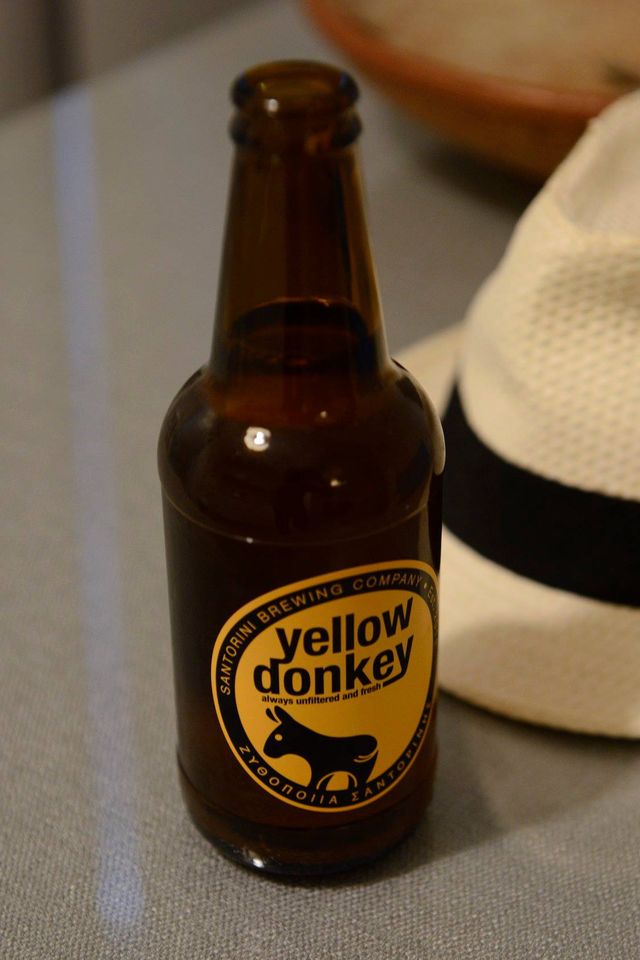 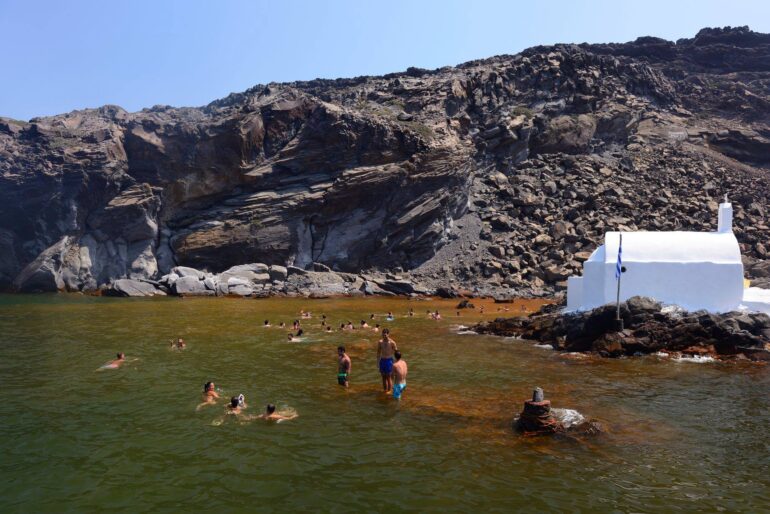 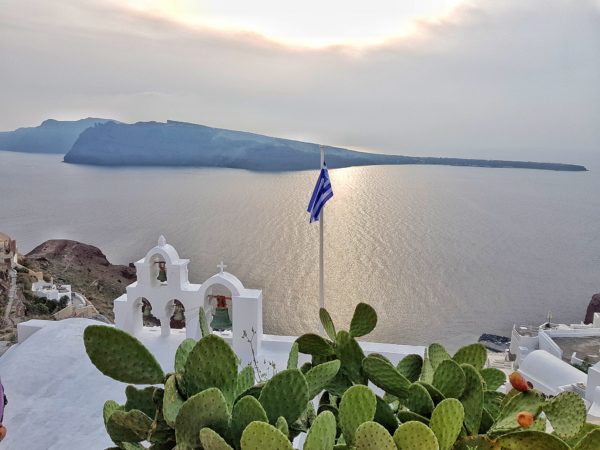 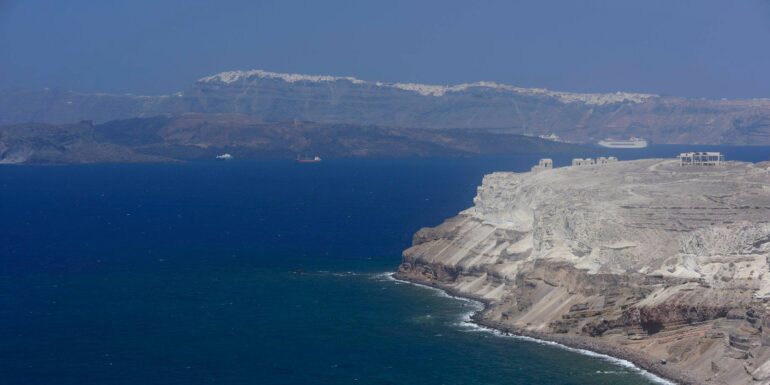 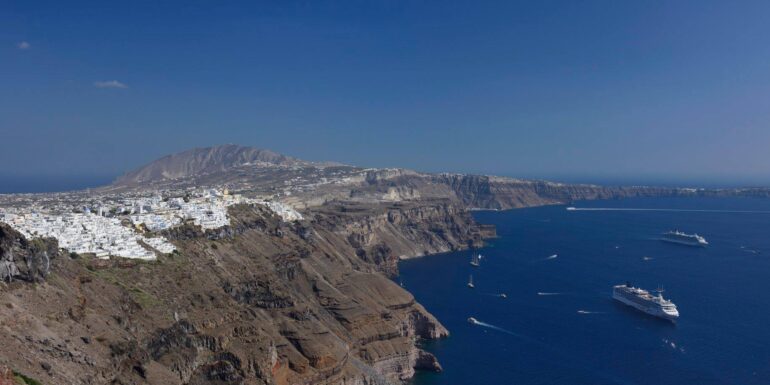 “I am horrified to read people’s experiences of horrendous crowds on one of the most beautiful islands in the world. Back when I was young, in 1981 – good heavens, 40 years ago! – I was lucky enough to spend a few days there. After an adventurous cruise (waiting for hours on the high seas for the passengers to transfer from a defective boat) we arrived at night, in the only way possible for a young Hungarian traveler at that time: with a backpack, a tent, no pre-booked accommodation, and of course with very little cash. Even around midnight, the inhabitants of the village came to the port, offering accommodation in their tiny white houses, and this was already an experience (there was no campsite). Nor were there luxury hotels, swimming pools, supermarkets, car or motorbike rentals. There was no airport, no glass elevator to get on and off, only the dilapidated bus to take you up that spectacular, twisting mountain road, the engine revving on every bend. But the island itself was a natural wonder. There were no tourist groups in July – I read with horror about the appearance of 8,000 tourists a day, more than a million in total during a summer season, the roar of airplanes, the honking of car horns, the bumping of elbows, and the overall noise. What has become of a wonderful corner of the Earth! Wherever we walked around the island, talking to the locals, or communicating through gestures (snow-white streets, snow-white little houses, blue shutters, bougainvillea/waterfalls of cyclamen running everywhere) and trying coffee offered by two old men who had put up a handwritten sign saying ‘café’, to tempt wandering visitors. Since there is no fresh water on the island, it was brought by ship once a day, from where it was carried to the houses by truck with a water tank – in a kitchen, we were shown the whitewashed cistern where freshwater from the tank was poured. It was an experience to walk into Kamari on that black, foot-burning, lava-rock ‘grit’ which covered the shore, and which, though it had little in common with the true sandy beaches that some people miss on the island, was nevertheless a unique sight I’ve seen nowhere else. Captain Cousteau also searched here for the ruins of Atlantis….
Walking back to Fira, up the steep hillside to the top, was perhaps the only thing I don’t remember with pleasure – our eyes were blurry with the heat and incredible as it sounds, when we got to the top we each drank more than a liter of water.

It’s good that we didn’t go back for nostalgia’s sake – it would have been a disappointment. Because at that time the silence, the sea breeze, the cavalcade of azure and snow-white colors, and the spectacular panorama surrounded us, so that time seemed to stand still… So long as I live, I will never forget it.” (Agnes, 2021) 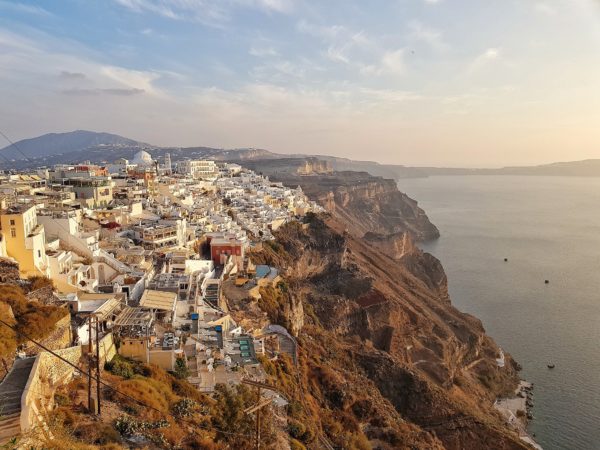 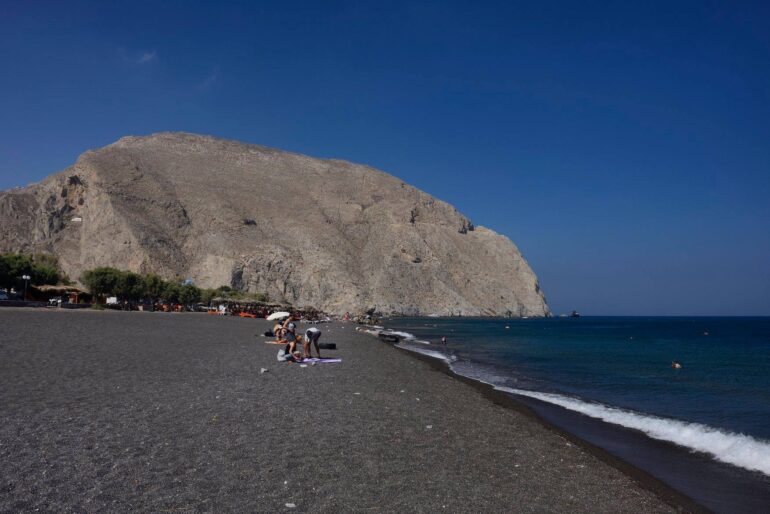 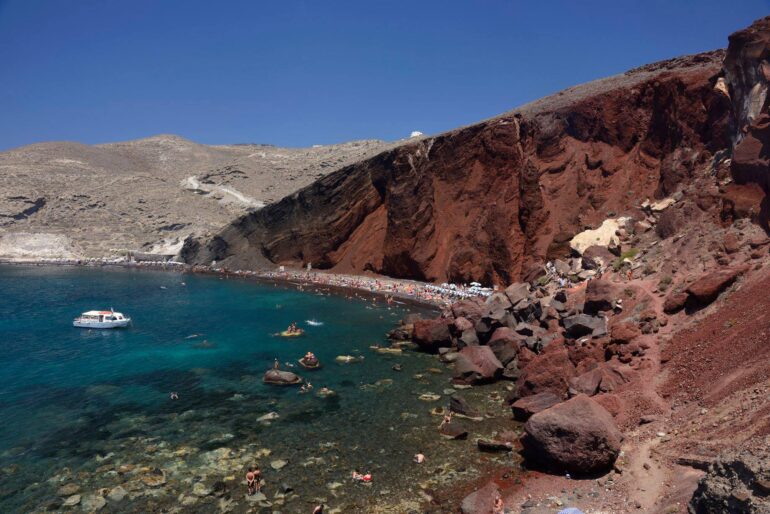 “The iconic little village is located on the northern tip of the island, and really is like the postcards. The narrow pedestrian streets are beautifully maintained, the dazzlingly snow-white walls are constantly cleaned, and order and cleanliness prevail despite the many tourists. The whole village looks as though a team of professional designers combined traditional Greek buildings with state-of-the-art interior design trends. Down the hillside, there is a mix of top-class accommodation and cafés and restaurants with fabulous panoramas. Of course, the prices include the view, so everything is terribly overpriced. The main course starts at € 30, but if we don’t insist on the panorama, you can get the same up the street for as little as €10 (our favorite kebab was made at a place called PitoGyros).
At the top of the village, a huge crowd gathers at sunset to admire and photograph the sun dropping into the sea. The sight is really stunning, and tourists always applaud it. It is worth arriving at the best places on time, otherwise, you can only photograph the backs of those in front. Generally speaking, if you want to take photos without big groups of Chinese tourists, you have to visit in the morning when the tourist hordes are still asleep.” (2018) 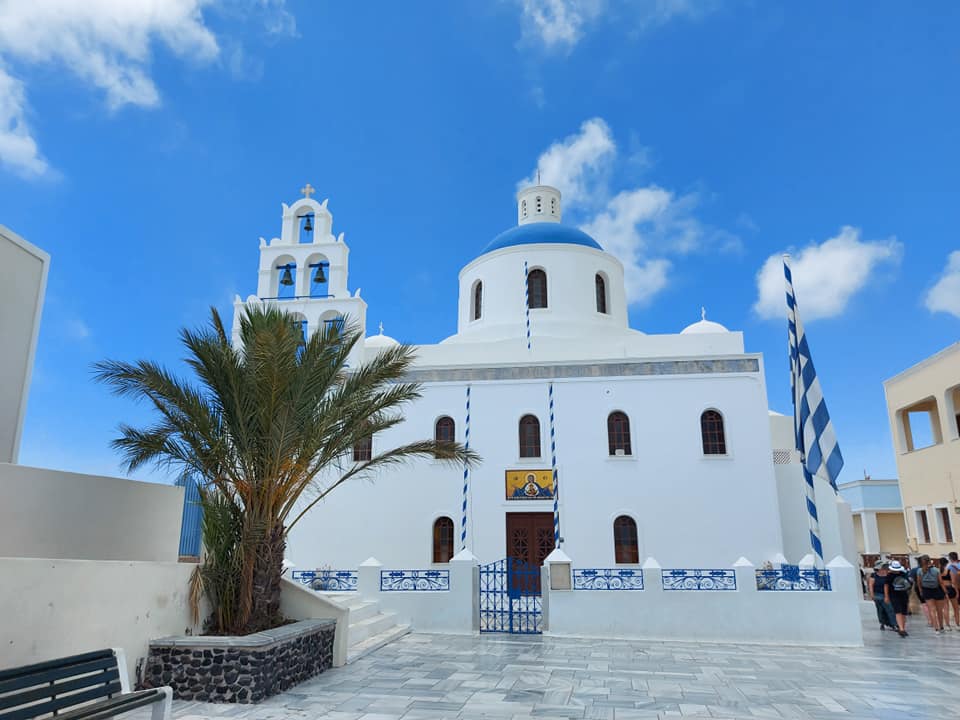