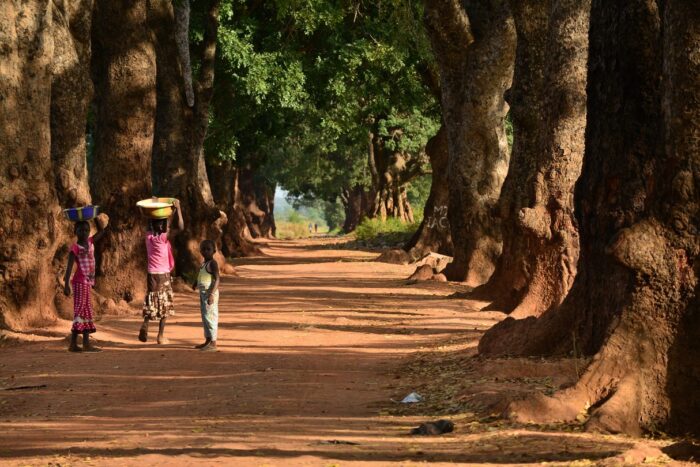 1.    Buying two Dogon door imitations at a market in Bamako

2.    The joy of being a guest at my friend Seyba’s and his family’s home

3.    Mali has a vibrant and diverse cultural heritage

4.    Dozens of kids welcomed us each time we entered a village

1.    We could not visit some northern parts of the country because of the terrorist and kidnapping threats 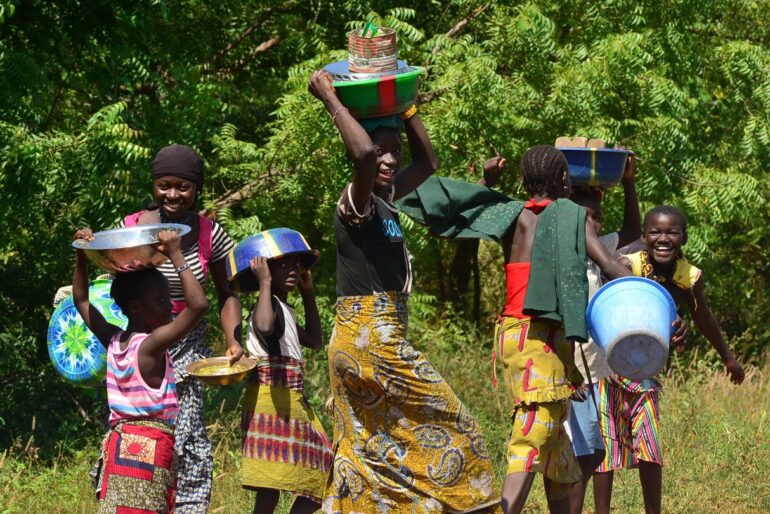 “Tourism has declined in Mali in recent years, because the security risk is significant. There are no administrative obstacles to visiting Mali, but if you travel into the north of the country then you’ve no idea who might think it worth their while to kidnap you – good money is paid for hostages. Kidnapping has been an occupational hazard in that part of the world for millennia, and while it has existed since ancient times, it has only begun to attract international attention in recent years. For desert people, it is simply a source of income. We can afford to ignore it only in those countries with enough central authority to stamp out these ‘traditional occupations.’ Central authority is weak in Mali, so it has not been stamped out.

Every region of the country has its own, characteristic occupations: cotton weaving, wood carving, forging, felt and cloth making, etc. There are no tourists now, so everything is transforming. On a ‘finders keepers’ basis, anything that might stave off hunger for another day is fair game. It’s a period when the role of the family and tribe is becoming ever more important – it’s very difficult for anyone to face such challenges alone.” (2016)
-------------------------
“An hour and a half before sundown we still had 70 kilometers ahead of us, and decided to spend out first night in Mali on the outskirts of an unknown village. We still don’t know the name of the village, unfortunately, as we didn’t note it down, and it doesn’t seem to feature on any maps, though at least 300 people live there. We stopped at the edge of the village and made our presence known to the first man we met. That was when the struggle for survival began. About 40 kids immediately appeared and began staring at us, first from about ten meters away, but steadily closer.

It isn’t easy to cook dinner when you’re crowded around on all sides by children, and we hoped for relief when we saw the elderly lady approaching us. She was wearing an elegant dress, with tasteful jewelry, and all the teeth in her otherwise impeccable smile were gold. We could understand nothing of what she said, however, and our own courtesies were evidently not satisfactory. In the end, the children had to explain to us that the woman was a griot, and that it was appropriate to give her a gift. After brief hesitation, we handed her CFA500 (about $0.80). She was very pleased with this, and promptly departed. Of course, at this point the kids all started clamoring for gifts of their own. We tried to solve the situation with a little football, but only managed to get about half of them involved. Some bored kids wrote Messi, Neymar and Jobe in the dust on the side of the car. (2017)

Thoughts on Mali in mid-trip

Though the army of child beggars in Nioro du Sahel indicates widespread poverty in Mali, still the people did not seem quite so destitute as in Mauritania.

It was disappointing that in Bamako well-dressed, clean, fashionable and healthy adults would stop and hold out their hands to us, saying ‘money, please.’

When in Mali there are signs around the ‘horizontal policeman’ or speed bump instructing you to slow down, your first response is to offer a crisp salute. In practice, though, you either slam on the brakes or else you’re sent flying through the roof of your car and into the wild blue yonder.

Every member of the Malian government should be sentenced to a life of driving up and down the Didieni – Bamako road, and even that would be a light punishment for having the gall to call this a highway.

You might be able to speed through a Malian village at 50km/h once, but afterwards you’ll have to drag your wheelless, shattered wreck to the nearest scrapheap.

Along the way you’ll only come across a few giants trees which have been spared to remind travelers that not long ago the Niger valley was one vast, contiguous rainforest.

The economy of rural Mali has been shifted into second gear by the mass spread of Chinese scooters.

It is a tragedy for visitors that fresh, fried fish is no longer to be had in the fishing village of Danga Pécheur – all you can fish out of the Niger river these days is red sand and gravel.

While boys and men ride motorbikes alone, women and girls do so with a baby on their laps and a sky-high jar balanced on their heads, as they roar off into the red dust.

While men gather under the few remaining trees to listen to music, play dice, pray, and discuss the problems of the world while holding hands, the women, girls and grandmothers gather under another tree to work.

I doubt there’s a single teenage cowherd in the whole country, who doesn’t wear a red and blue Messi soccer jersey as he drives his semi-wild herd along.

In the evening, on the red sand road which leads into the village of Sognebougou, you’ll pass barefoot grandmothers with improbably high bundles of roses on their heads, fading into the dusty night.

In the village of Siby your stomach may grumble, you may in fact starve to death, but between morning and evening your pleas for a hot meal will all be in vain – there’s simply nothing to eat. You might, at most, be able to gather some fruit, so long as you pick it yourself.

Driving in Mali in the countryside in the dark, wherever you decide to stop and sleep, you’re sure to discover in the morning that you’ve actually spent the night parked in someone’s yard or garden, or are blocking the traffic because you’re parked in the middle of the ’road’. 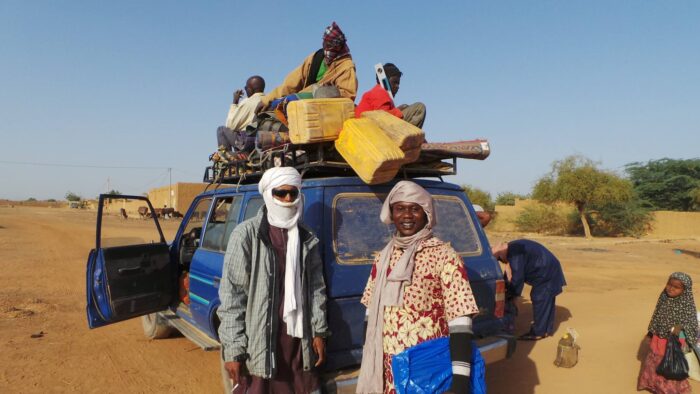 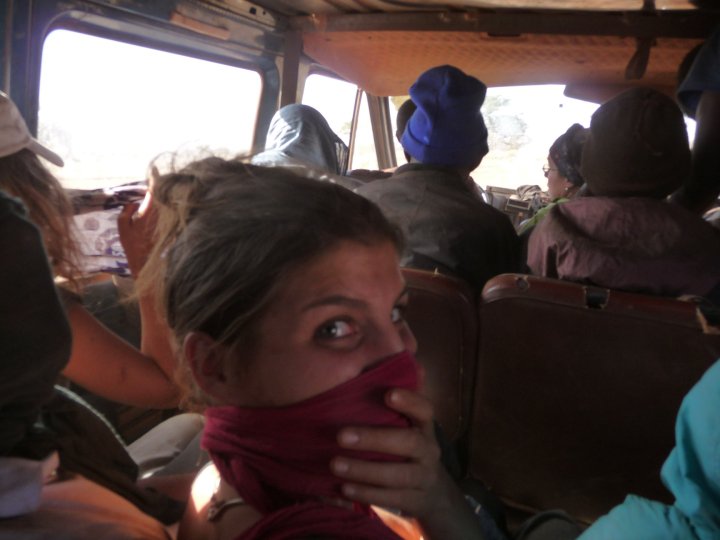 Mali - inside a taxi brousse on the way to Koro - s.s. photo 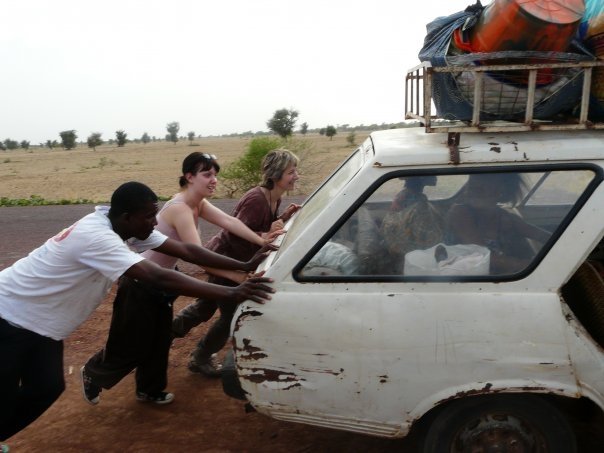 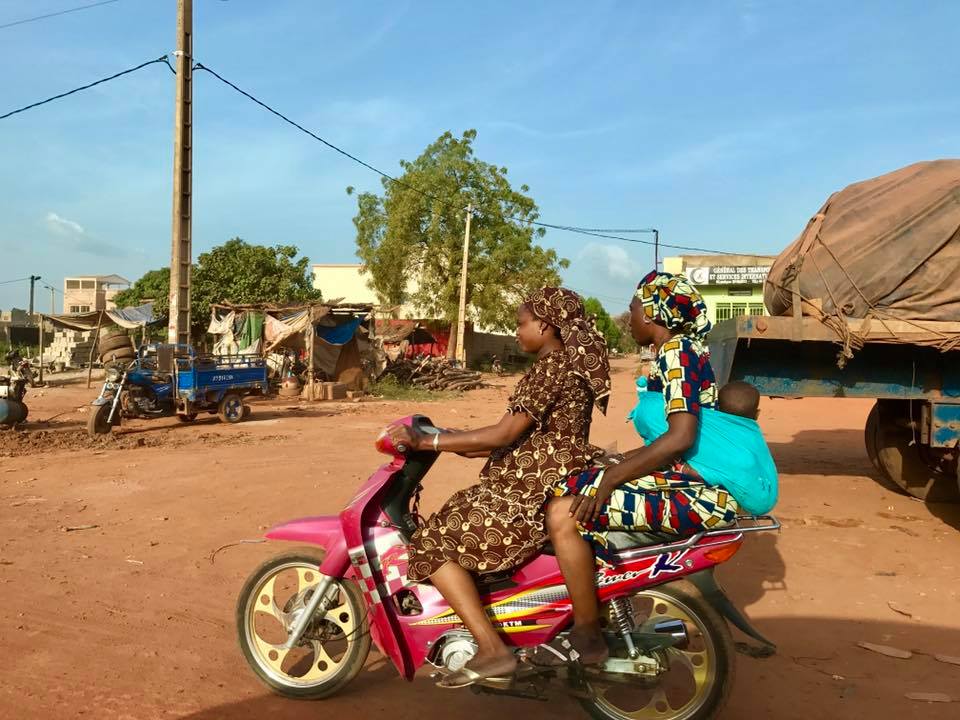 Mali - ladies + a baby on a scooter - Alexander S. photo 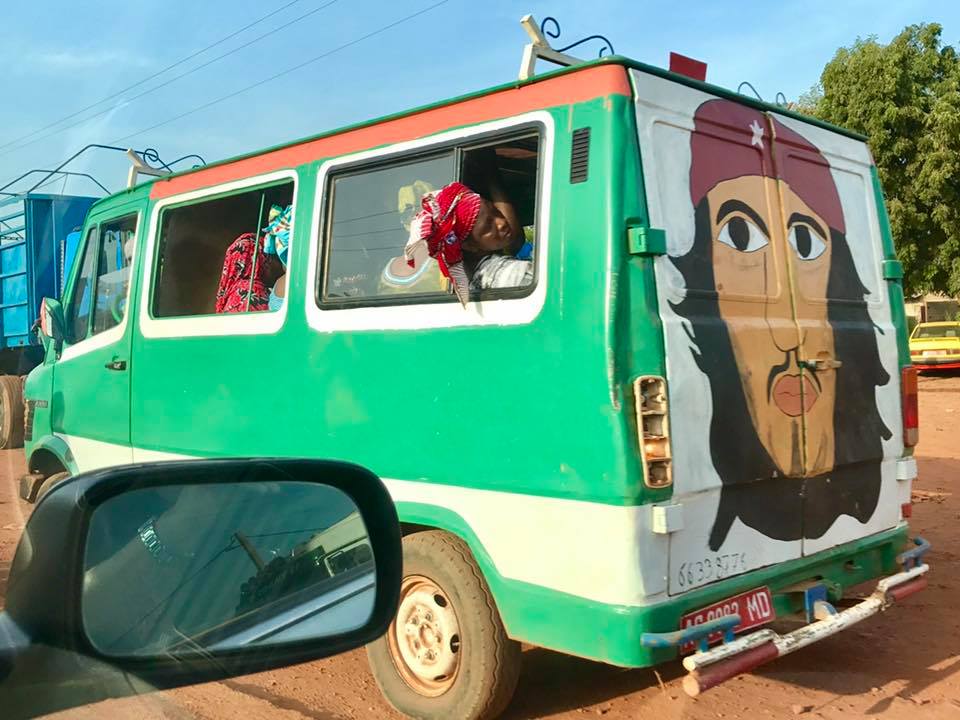 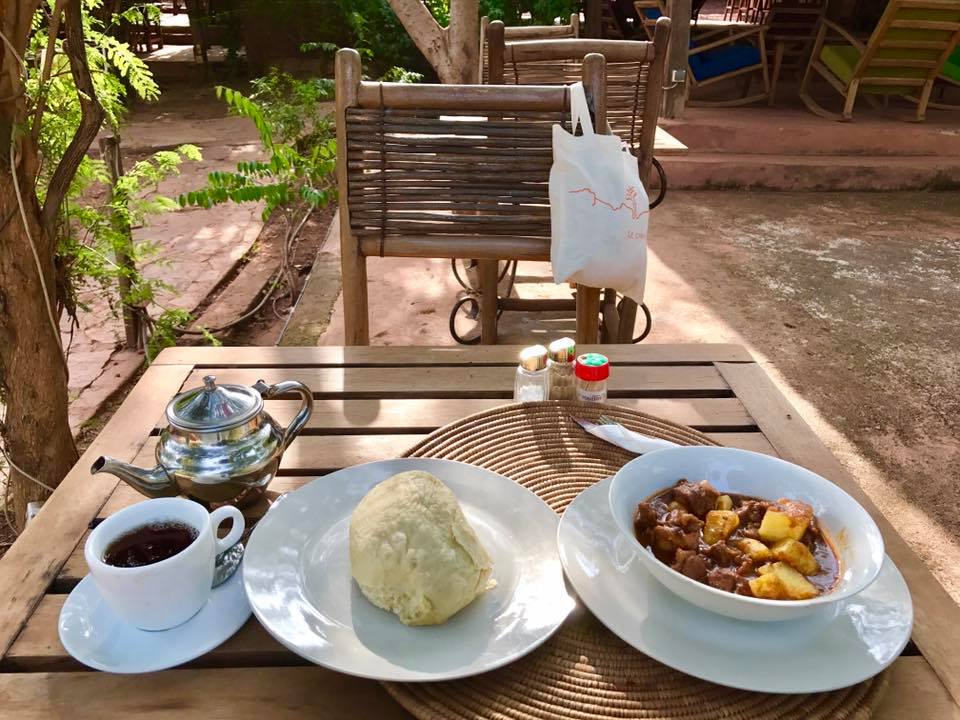 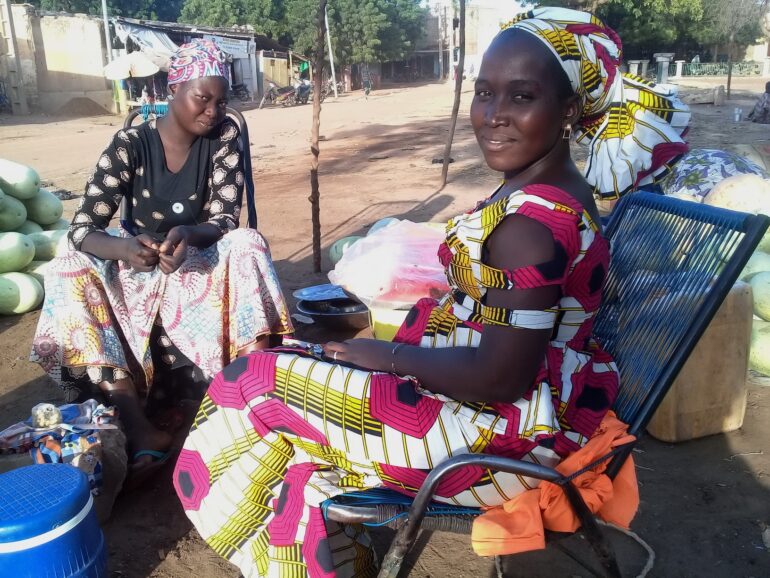 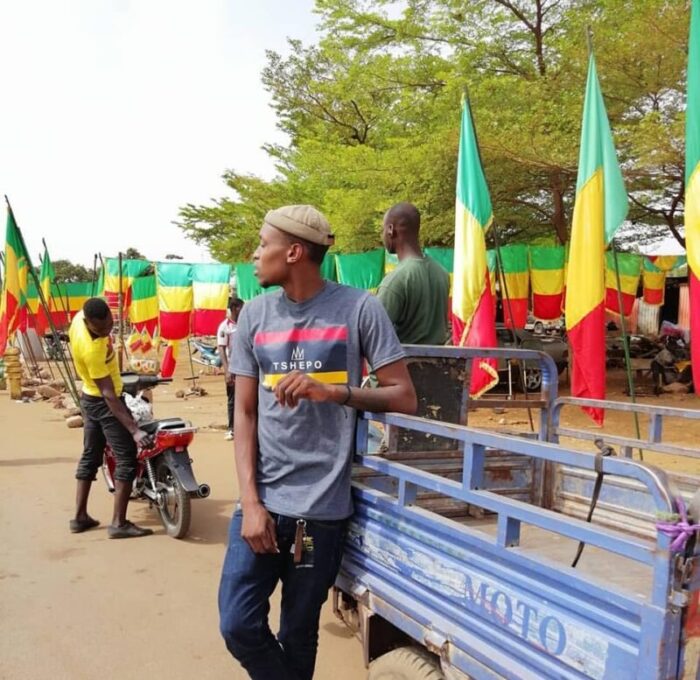 Mali was a French colony before it gained independence in 1960.

Capital city: Bamako - The name Bamako comes from the Bambara word meaning "river of the crocodile." The crocodile used to be the fetish of Bamako and, in the old days, she was given a virgin maiden to eat each year. The disappearance of one of the two necessary ingredients to this ritual, namely the crocodiles in the waters of Bamako, might have contributed to its abandonment…

Population: 20 million (2020) - Half of Mali's population belongs to the Mandé ethnic group, comprising the Bambara, the Malinké, and the Soninke.

Most of the population lives along the Niger River.
Among the Dogon, a staunch traditionalist tribe living in the central plateau region of Mali, harmony in social relations is firmly emphasized. Harsh words are considered dangerous, sometimes even lethal, and accusing someone falsely can have profound consequences. In such a case, the accuser must ask for forgiveness and can remain at the victim's mercy indefinitely.

Languages: French is the official language, but about 40 local languages are spoken – Bambara is the most widely spoken local language – Only about 7-10% of Malians speak fluent French, mostly urban dwellers.

Muslim religious authorities are trying to increase their influence in Mali's political life. There are concerns, both within Mali and abroad, about the growth of militant Salafist Islam in the country.

There is a long-standing security crisis (arguably a civil war) in Mali because of terrorist activities in its northern areas. The armed hostilities between a regional jihadist offshoot of Al-Qaeda and the Islamic State and the Malian army (with the backing of UN and other international forces) make the security situation very fragile. The areas close to the shared border with Mauritania, Algeria, and Niger are dangerous, but there have lately been some promising prospects for peace with some non-Jihadist separatist groups. In the central part of Mali, the Malian government is unable to guarantee the population’s security, and civilians suffer greatly from the ongoing violence.


The country’s principal exports are cotton, gold, and livestock.

Safety: It is quite irresponsible to visit Mali as a tourist at the moment. Even Bamako is not safe. Foreigners can be the targets of both kidnappings and terror attacks.

Old towns of Djenné and Timbuktu, the Cliff of Bandiagara in the land of the Dogons, Tomb of Askia in Gao, Boucle du Baoulé National Park, the National Park of Mali in Bamako 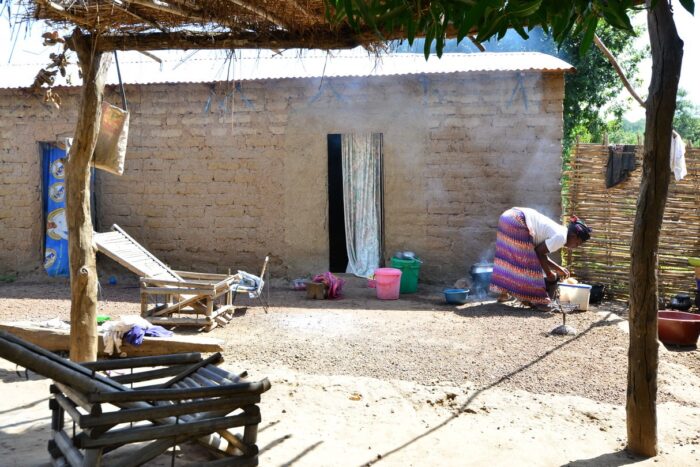 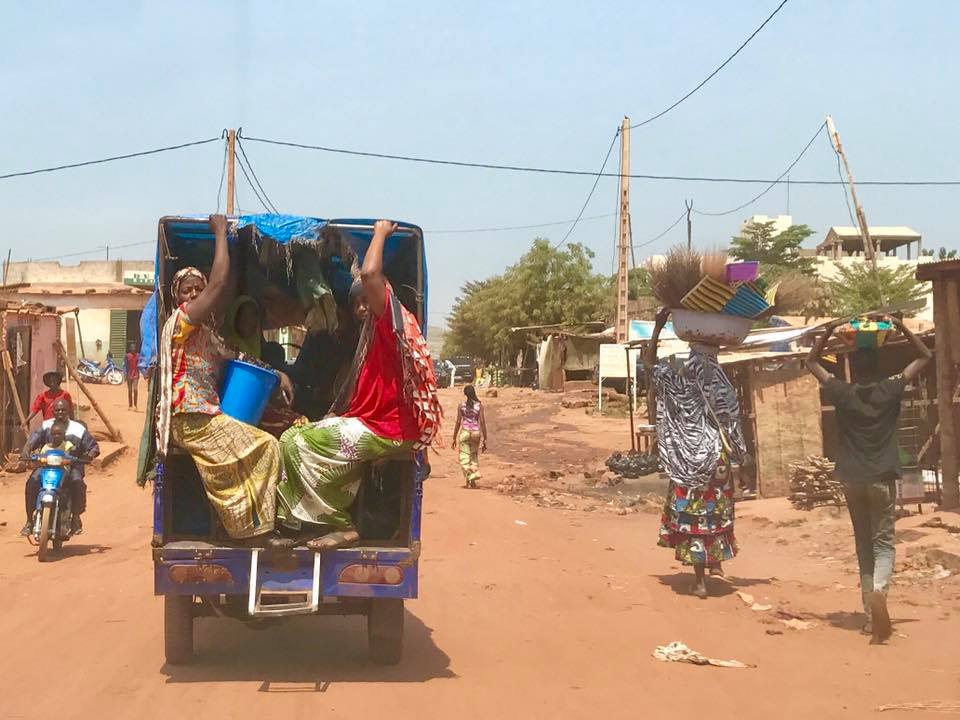 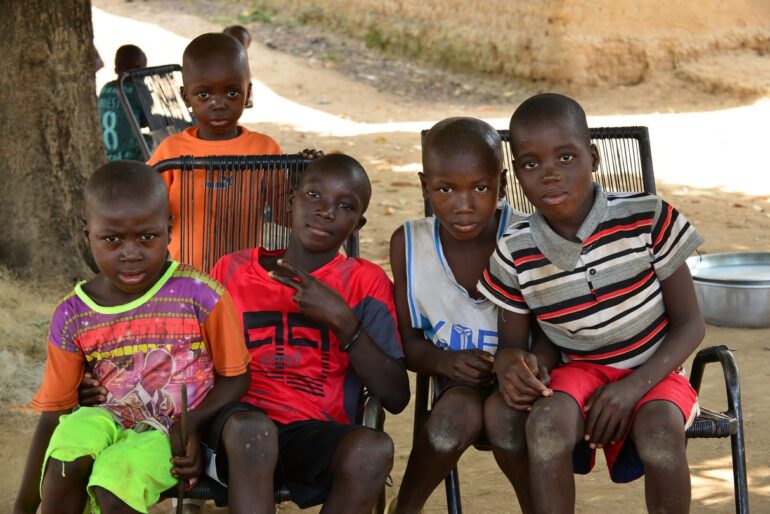 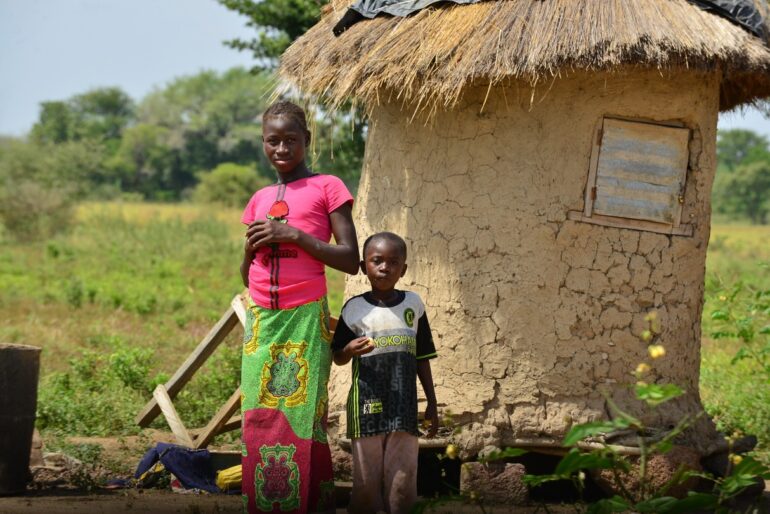 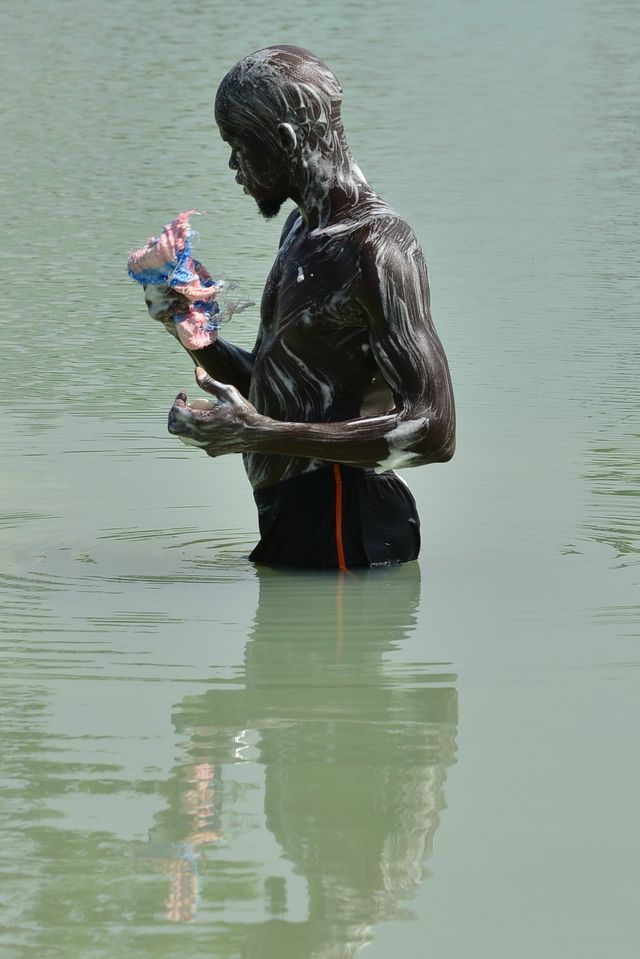 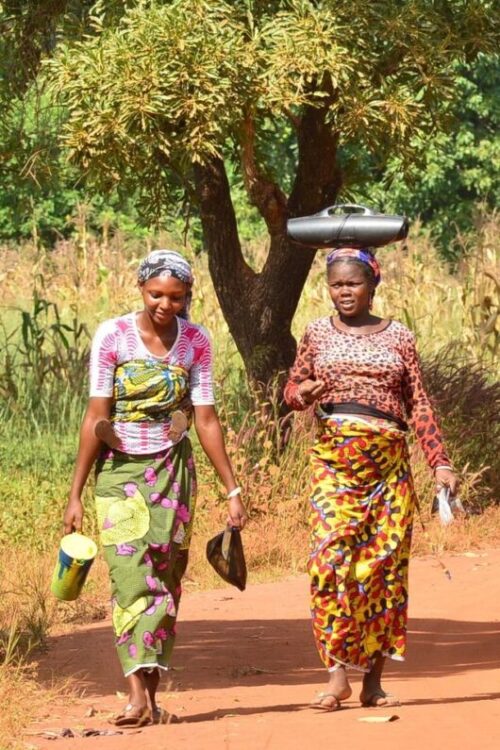 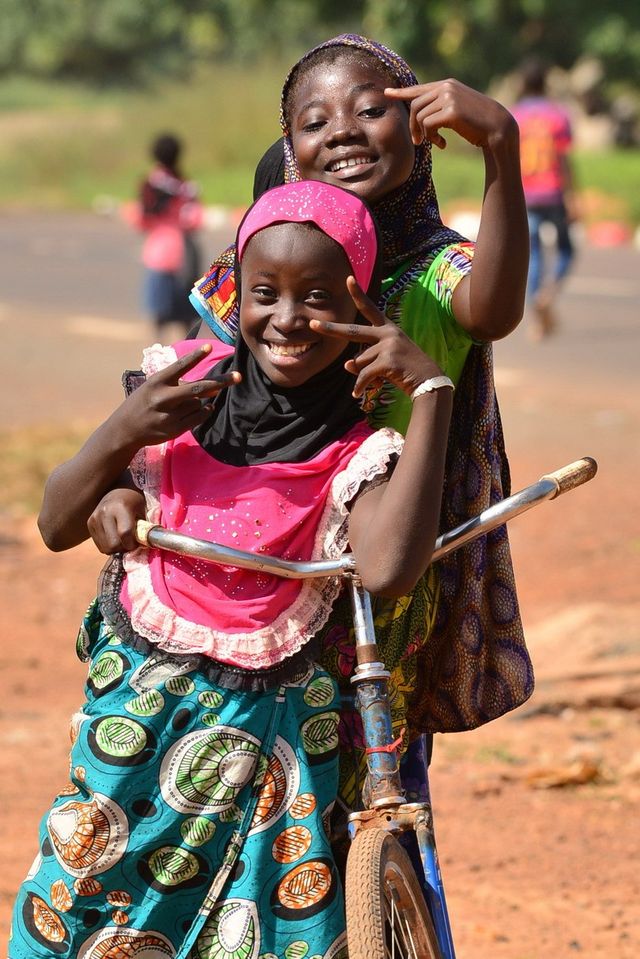 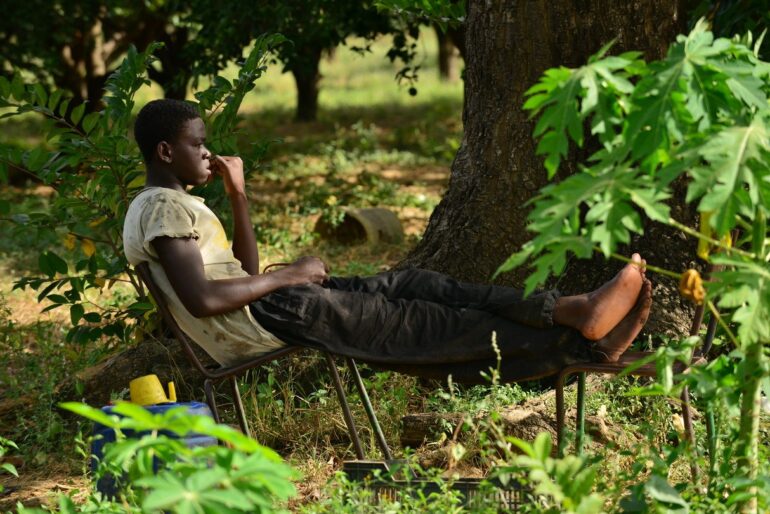 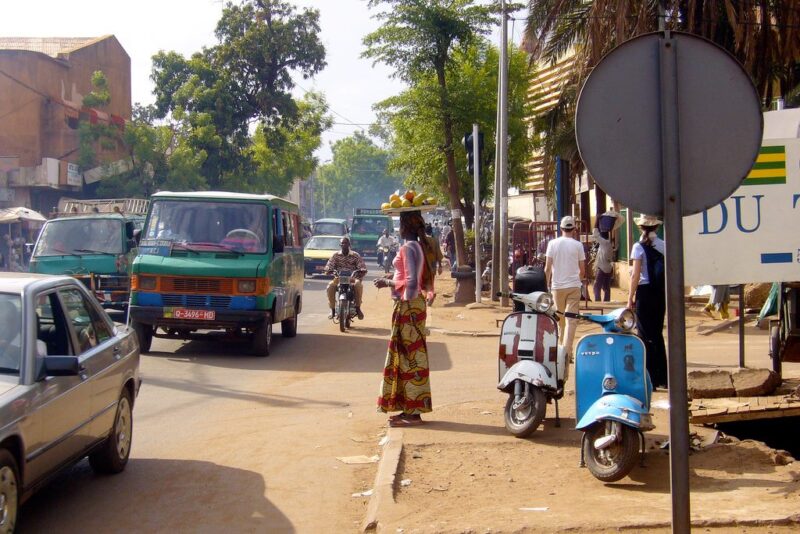 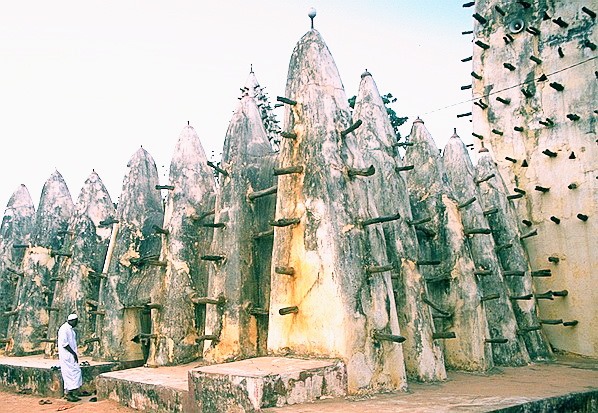 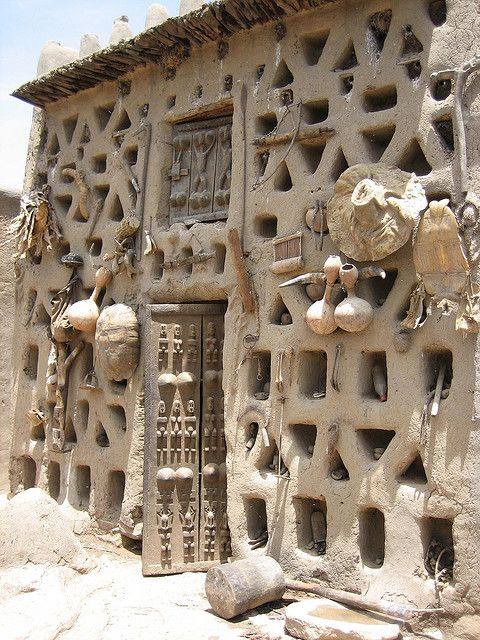