1. Krabi Town is an excellent springboard for superb sea excursions

2. There are a lot of good, simple, and cheap eateries

3. To admire the wonderful sunrises and sunsets from the beaches of Krabi

4. The natural environment of the Railay Beach

7. Local people are amicable, not yet spoiled by tourism.

8. Cheaper than Phuket and Koh Samui and not that overhyped

9. Massage on the beach of Ao Nang 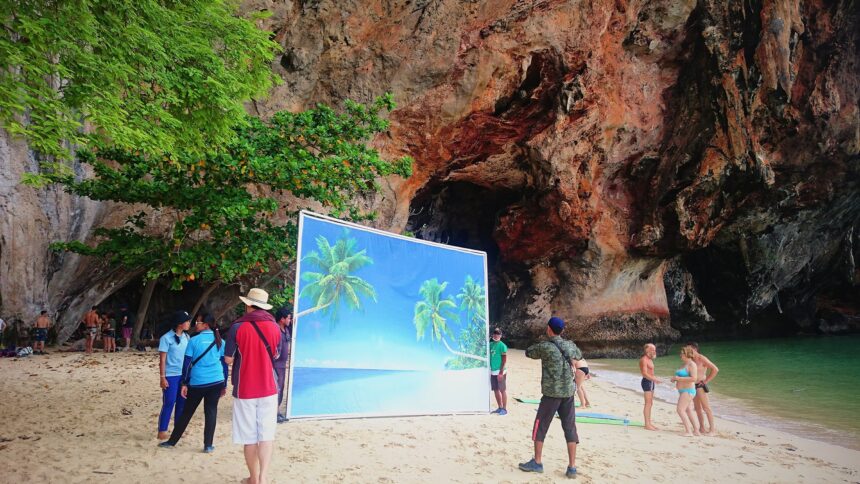 1. Ao Nang is very touristy, yet far less shopping and entertainment options than in Phuket and Samui, not to mention Pattaya.

2. It becomes crowded in high season (November-March), the noise is constant

3. At the beaches, the terrible engine noises of the longtail boats

4. Rubbish, dirt, oil-spots in some parts of the coast

8. Need to adapt to the low tide and high tide

9. The cheeky monkeys on the Phra Nang beach

10. Better hotels are in too isolated places 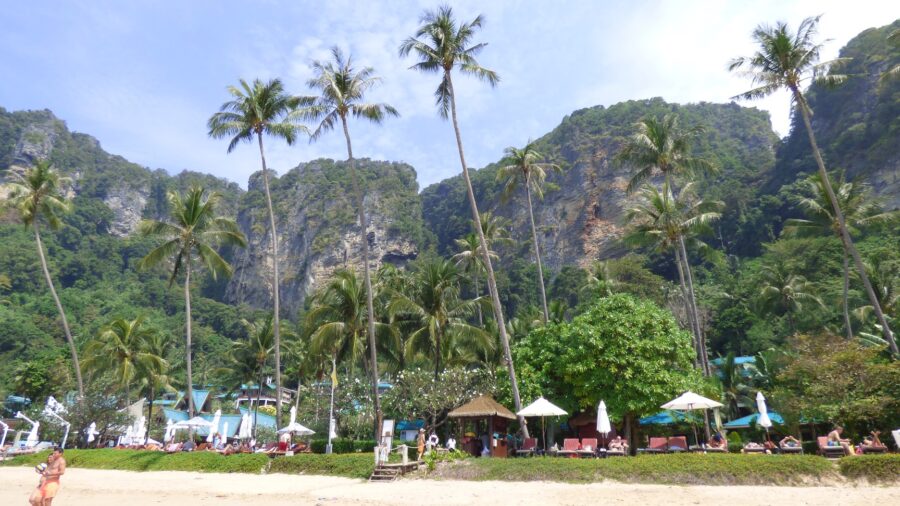 “There is plenty to see and do, and for the most part, it’s a lot cheaper than in more upscale parts of Thailand. (For example, I went on a two-hour horse ride that cost half as much as a half-hour ride would have cost in Hua Hin). I’d never been on a horseback tour before, and I also tried rock-climbing and rafting for the first time, but I had as much fun (if not more!) on the days when I set off on my own and discovered, for instance, a rocky stretch of coast inhabited by a pack of monkeys, and the mini-jungle just five minutes from my hotel.

I also liked the public parks in Thailand, where children in uniform play games together, and the seashell-covered beaches – not to mention the narrow, pretty streets of Krabi itself… All in all, it was love at first sight, and ever since I visited I’ve missed my favorite beach, my favorite cliffs, and my favorite sunset.”

“I took a look round the town, but to be honest, there isn’t a whole lot to see besides the evening market on weekends. Krabi town isn’t a tourist destination, and the tourists generally go to Ao Nang or Railay Beach, where most of the four- and five-star hotels are to be found.

I visited Ao Nang on my first afternoon, and that was also the first time I ever traveled by songthaew. The songthaew, which is generally a pickup or some other small truck converted into a large taxi, isn’t the most comfortable way to travel, but the views more than made up for it – there were high green cliffs and palm trees all along the route, and the only thing that spoiled the picture slightly was the huge number of overhead cables. The journey took about half an hour. That night it rained and the wind picked up, so the water wasn’t as clear as I’d expected. Still, I’m not saying it wasn’t beautiful – in fact, it was one of the most beautiful beaches I’ve ever seen! There were plenty of those ‘longtail boats’ as well, and you can hire one to take you to the nearby islands.” (2018)

“The prices are higher here than in Northern Thailand. You can see that tourists have already inflated prices here, but I suppose it’s a seaside destination, so it’s hardly a surprise.

As a cultural destination, Krabi doesn’t have much to recommend it; there’s nothing exciting going on here. It’s a good place to chill out, though, or as a base for exploring some islands. There are a few good live-music pubs (I particularly recommend the Full Moon bar! They do fantastic fries).

The islands (Phi-Phi, Koh Lanta, Kho Phi Phi, Poda, etc.) can be reached from two harbors. The harbor to the north of Ao Nang beach was kind of far for us, so we sailed from the nearby beach.

Be careful with the longtail boats, especially in rainy weather, when the seas can get quite choppy. Still, these boats do handle the waves well and get from point A to point B relatively quickly.

One piece of advice, though, if you’re traveling on a longtail boat in windy, rainy weather: try to avoid the front row – it isn’t covered by the roof, and you’ll catch most of the spray, making it a fairly wet and cold experience.

One place I’d particularly recommend in the vicinity of Krabi is Railay Beach, where there are also plenty of longtail boats. It’s a very pretty little beach and a great place to try Thai pancakes, which I also recommend!

Honeymooners may be interested in a secluded little hotel between Railay Beach and Ao Nang (Centara Grand Beach Resort & Villa). It can be reached by longtail boat, which may seem tricky with a lot of luggage, but don’t worry, they’ll figure it out!
One more interesting thing: we saw a crocodile roaming freely in the river/canal at Haeng. (Dora, 2018)

“Ao Nang is the most popular beach in the area and is also a point of departure since boats leave from here to all the local destinations. The beach is actually a bay surrounded by high cliffs and mountains. It’s a long beach, and the water is beautifully clear.
Most tourists here are either holidaying couples/families or retirees. Travelers come from all over the world and are no overwhelming numbers of Chinese, Russians, or any other nationality which predominates.

Prices are by no means extortionate, and by Thai standards, it’s a relatively cheap place. It’s possible to eat both at markets and at restaurants. It’s a very calm, friendly place, but there are also plenty of life-music bars for those who like a little nightlife.” (2019) 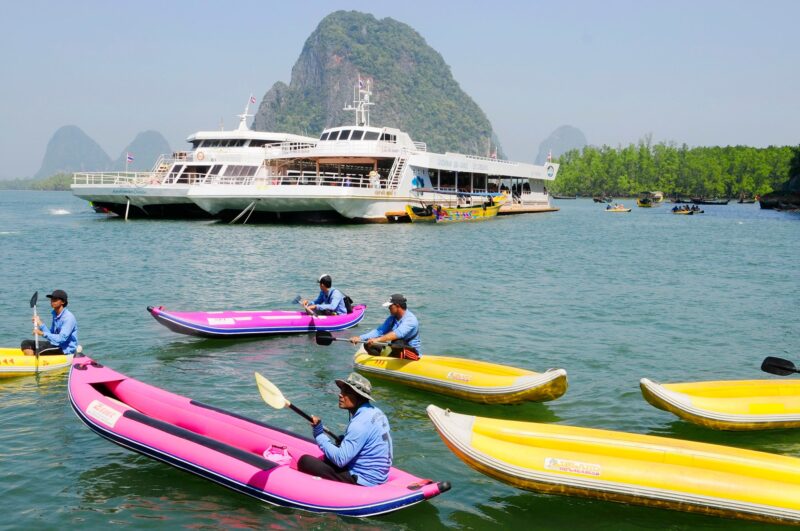 We stayed at the CENTARA ANDA DHEVI RESORT & SPA 4-STAR hotel. It would easily count as a four-star hotel in Europe, too, or perhaps even five-star. It has a medium-sized pool, and while the rooms aren’t particularly large, they’re perfectly adequate for two people. The beds are enormous. Breakfast is generous, good quality, and varied. It’s worth asking for coffee separately, though you have to pay extra for it. 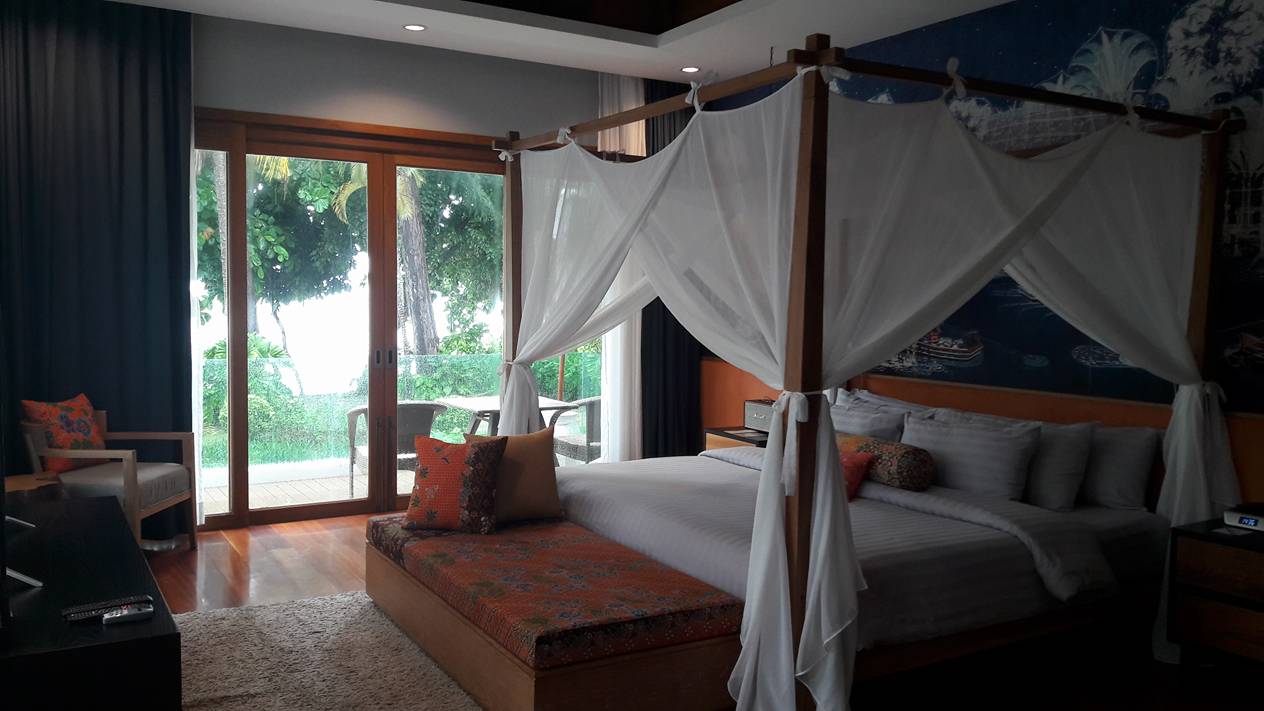 “There are a surprising number of Muslims in this part of Thailand, which in turn means the food is a little different. This is no bad thing – we generally love Muslim cooking, which is tasty, but also damned spicy.  In Krabi we found it tricky to find places which served cheap and tasty food – or rather, we found them, but we couldn’t get a seat. We almost always had to book in advance, which shows the attractiveness of the place, and its increasing popularity.” 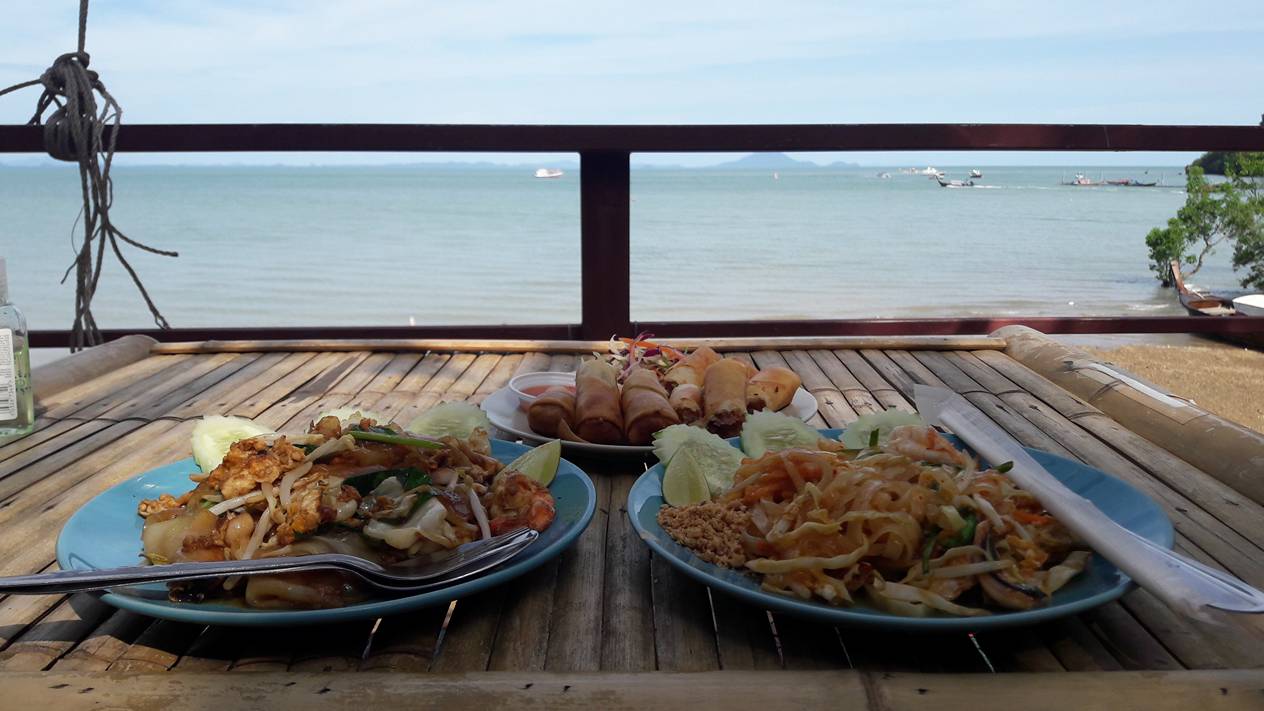 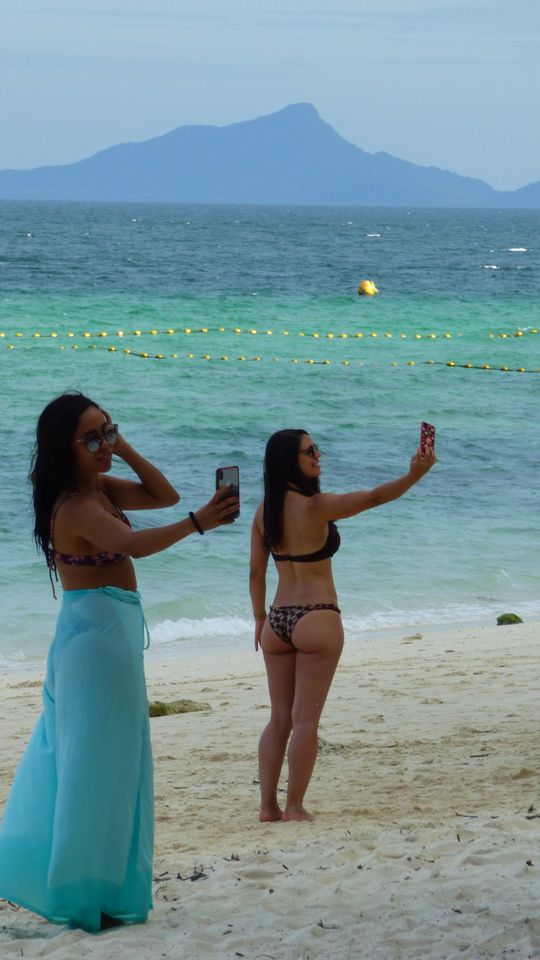 Public safety is excellent in the province of Krabi.

When you read about sporadic aggressive or terrorist actions of radical Muslims in southern Thailand, please note that these areas are far more south of Krabi.

“Ao Nang Beach: the promenade is beautifully constructed, with lots of restaurants and massage parlors along its length. However, this is less a beach and more a busy harbor. It’s about one kilometer long, half of which is occupied by boats. The other half would be perfect for swimming if it weren’t for the thirty diesel boats constantly in motion.
This is where boats sail to Railay Beach from since it’s impossible to get there overland (it costs a few dollars, and takes ten minutes one-way) and also where boats depart on trips to the nearby islands.
These island trips cost at least $30, plus an extra $13 for entry to the maritime national park. This always has to be paid separately, and I think only one or two islands don’t charge an entry fee.
Many on these tours say that both the boats and the islands are overcrowded, meaning you can’t enjoy the beauty of nature (except perhaps on Hong island), and during snorkeling, the guides throw bread into the water to attract fish, while the snorkelers bump and kick one another.” (2020) 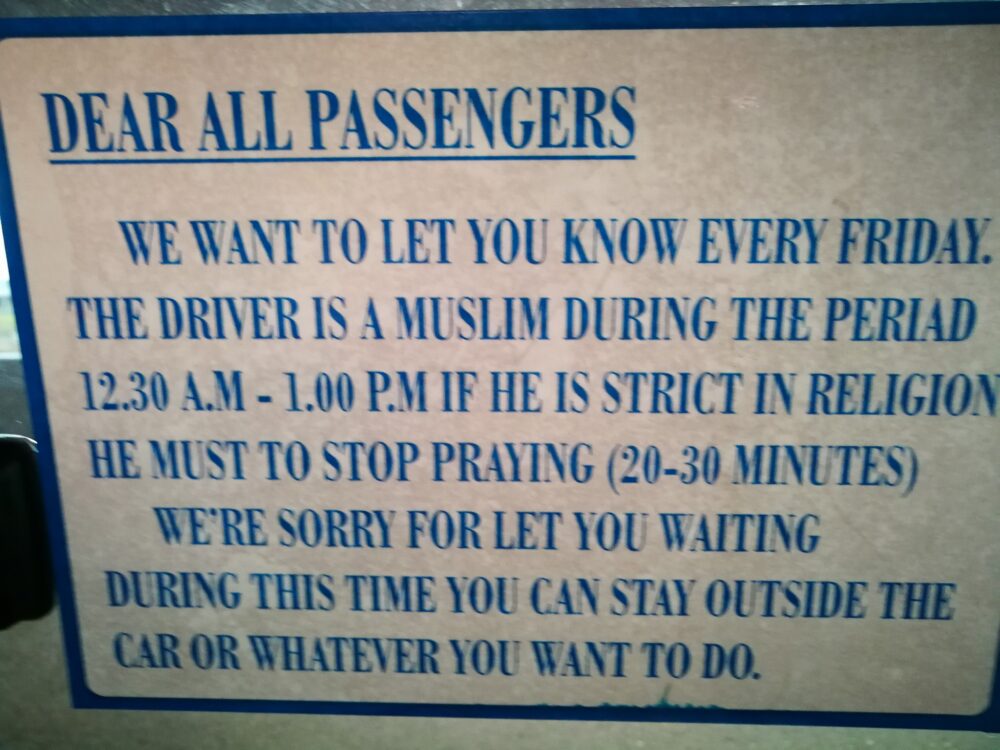 Krabi - The population of the area is Muslim - r.g. photo

Krabi is a province in southwestern Thailand and also the name of its central city (Krabi Town). Krabi is 814 km (505 mi) south of Bangkok. 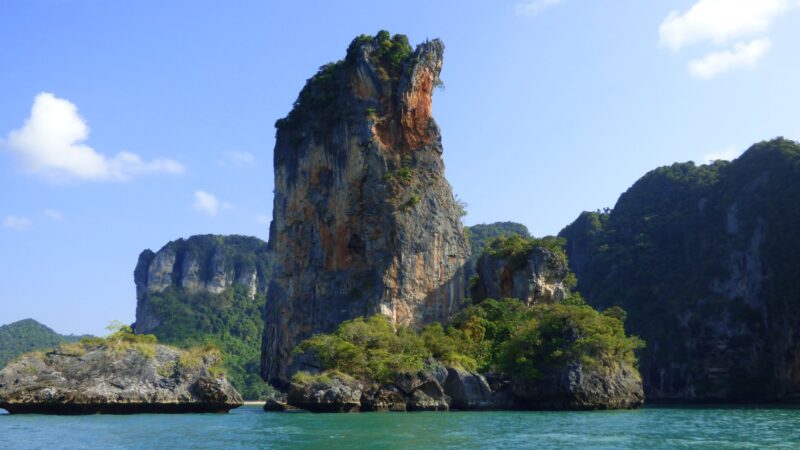 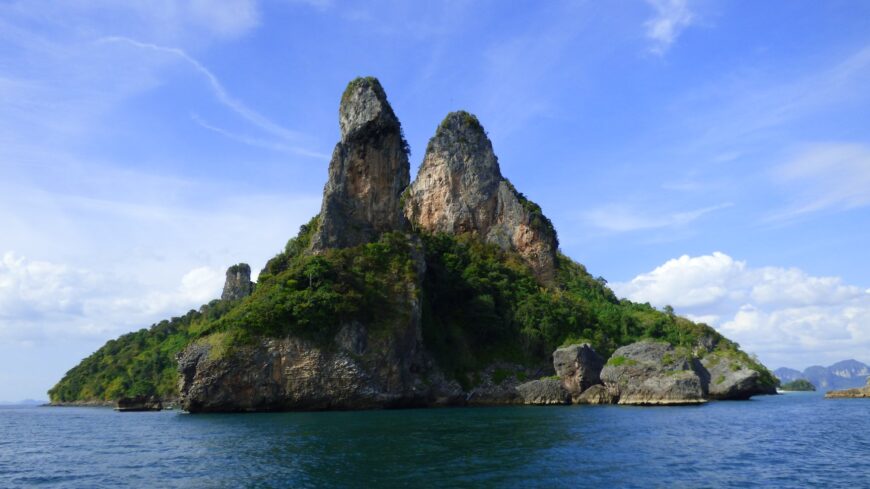 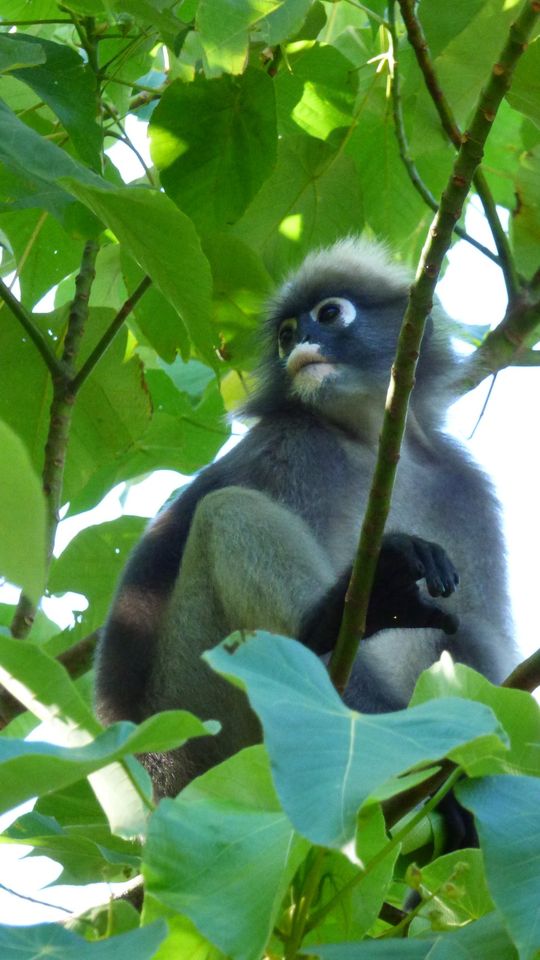 January is high season here, but it rains almost every day. Not for long, admittedly, but it’s still an inconvenience. These are tropical showers that soon pass. The better hotels are prepared for the weather, and umbrellas are already supplied in each room. If they aren’t, just ask and the hotel staff will supply you with one. It’s also easy to get a sunburn, even after just five minutes outside, so make sure to wear a high factor sunscreen. 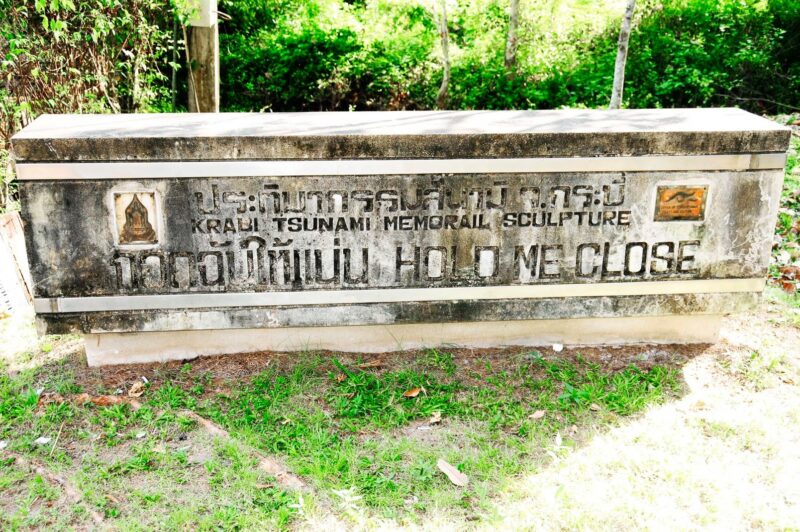 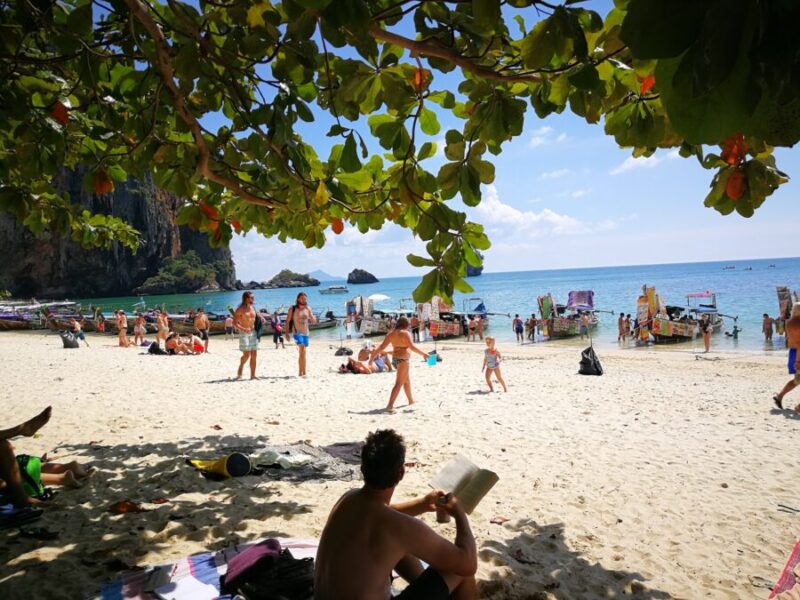 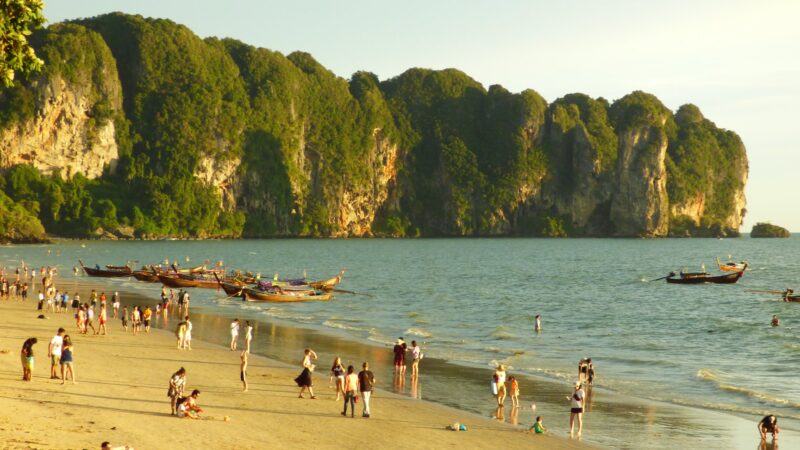 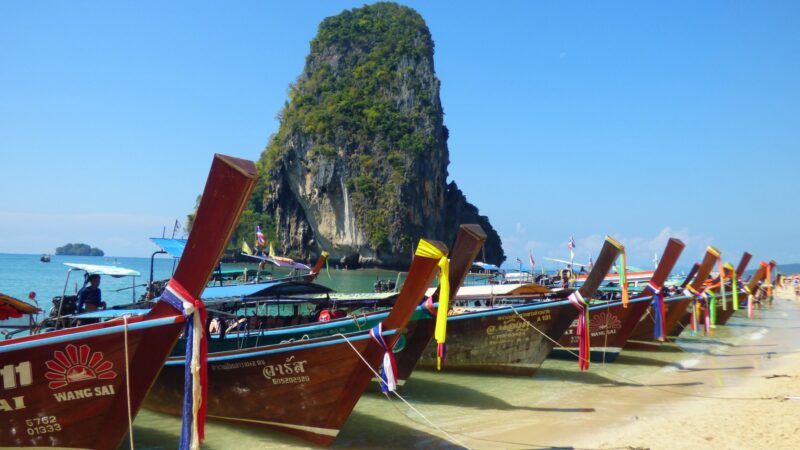 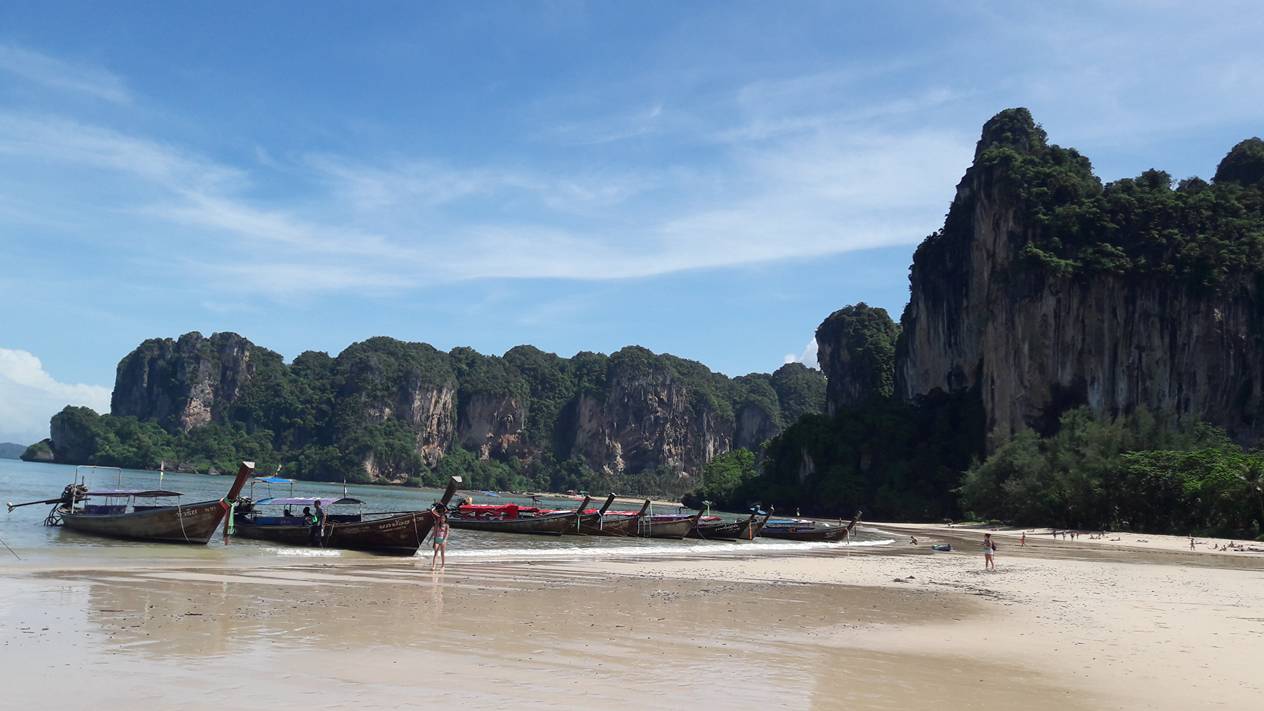 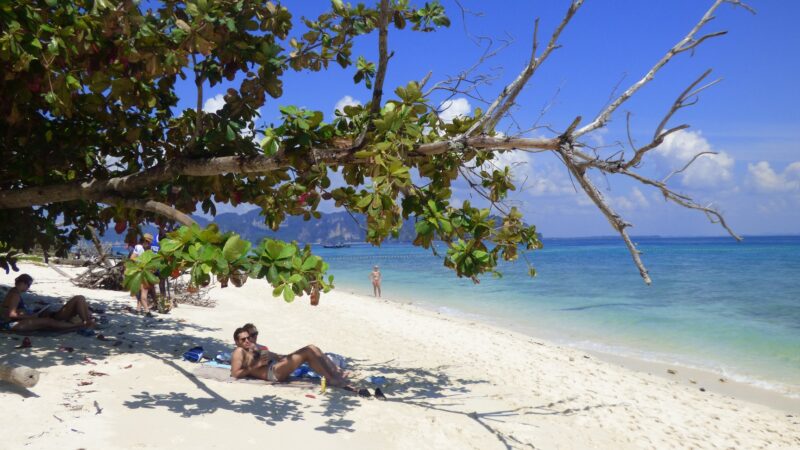 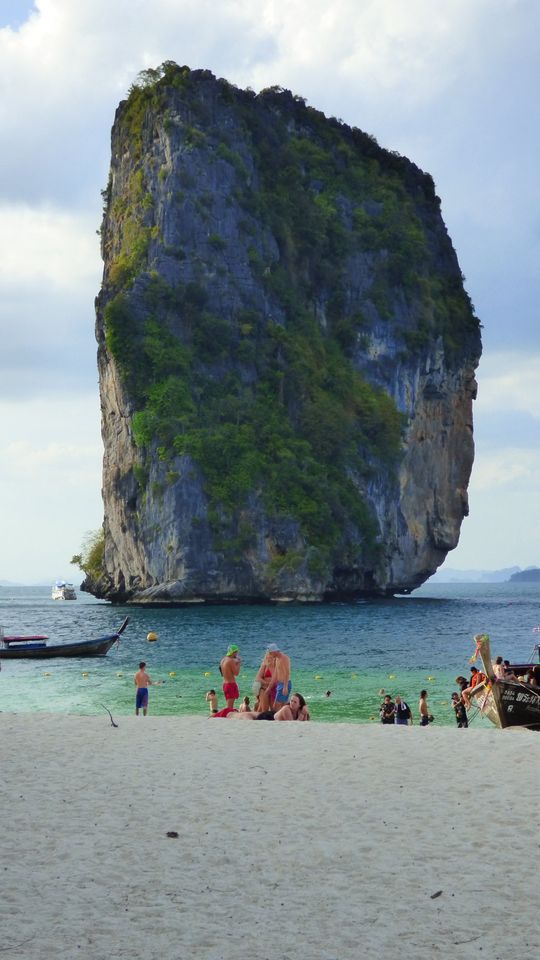 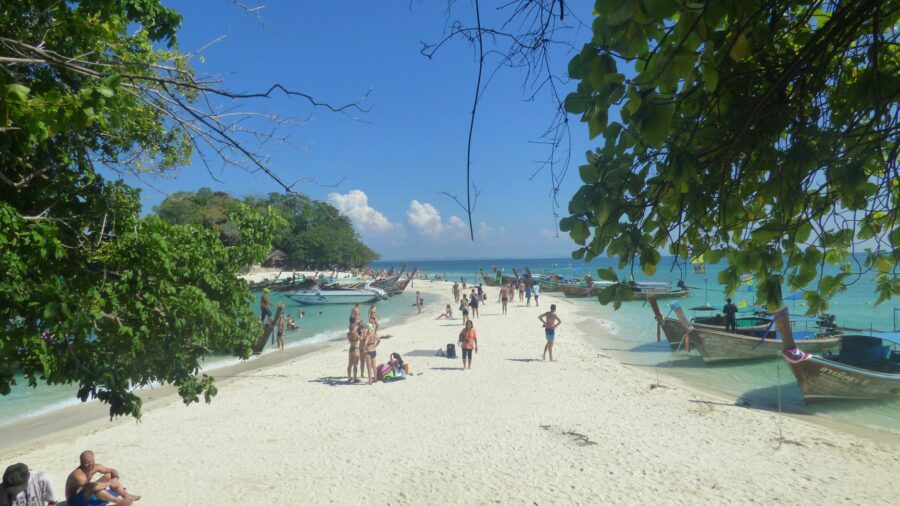 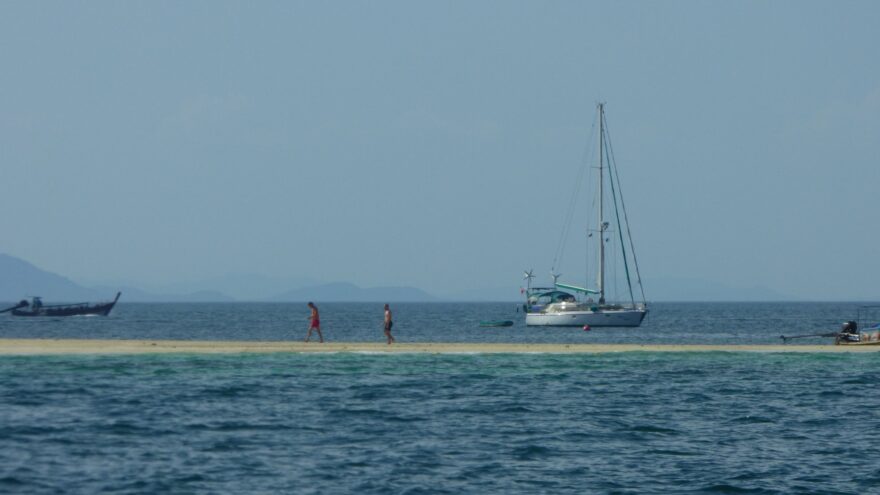 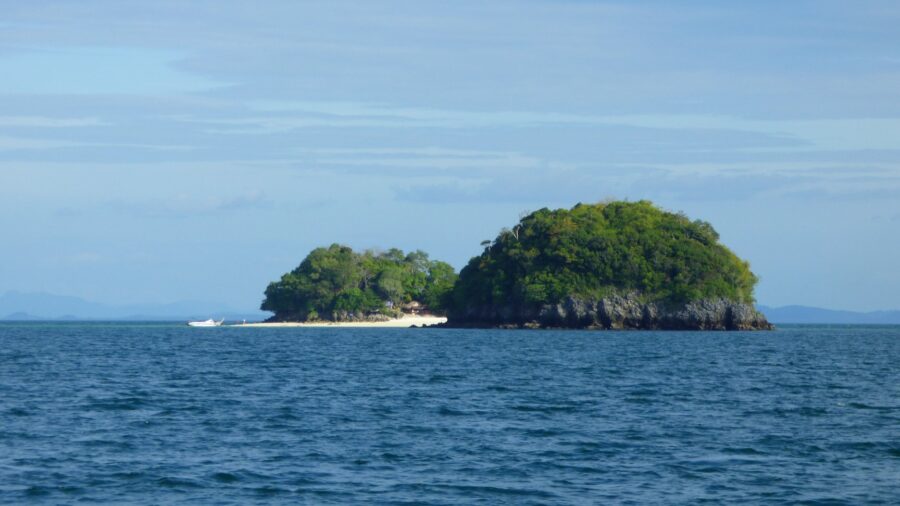 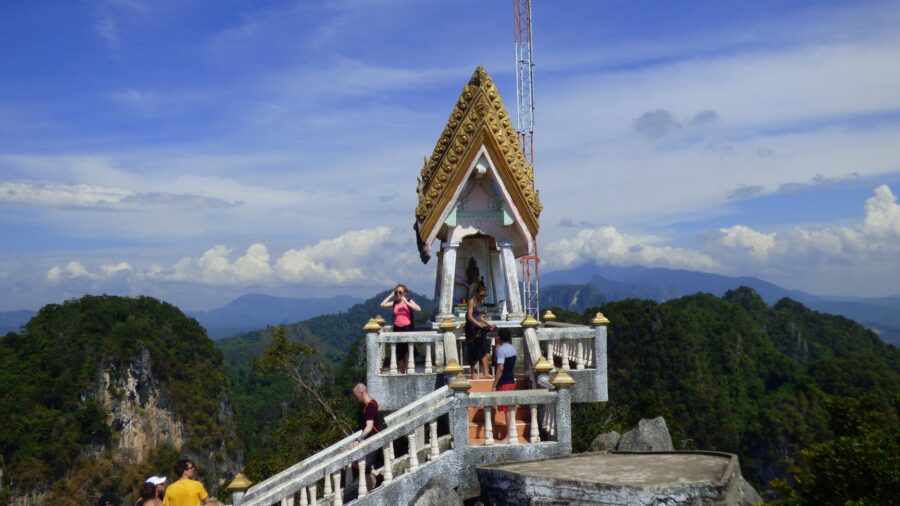 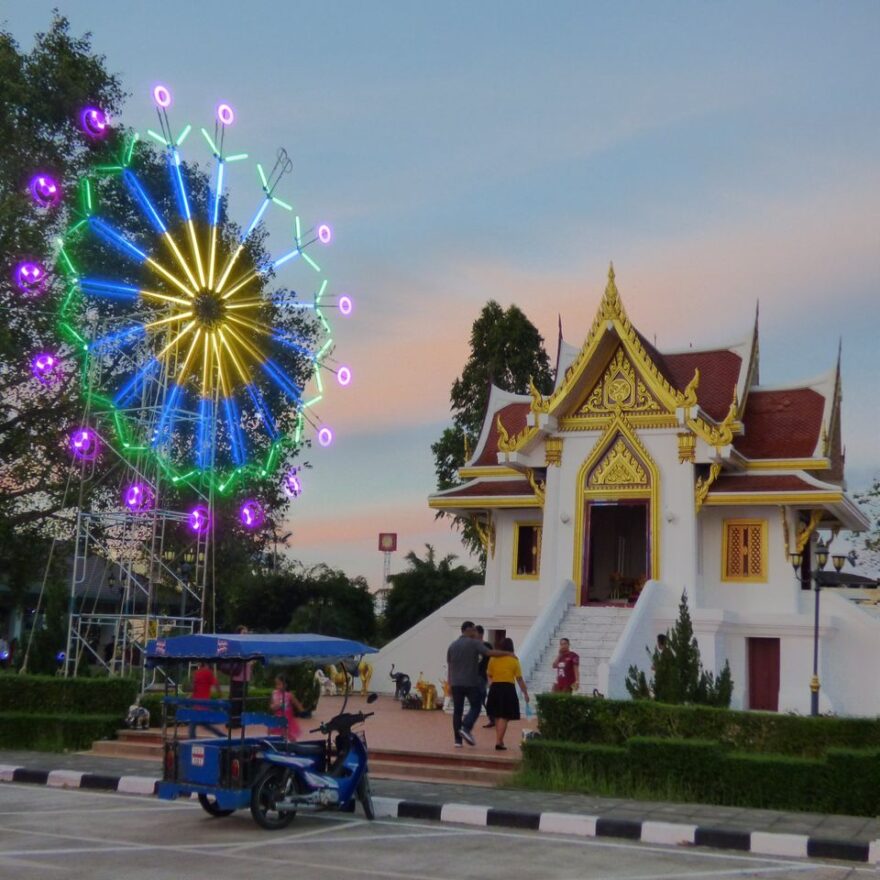 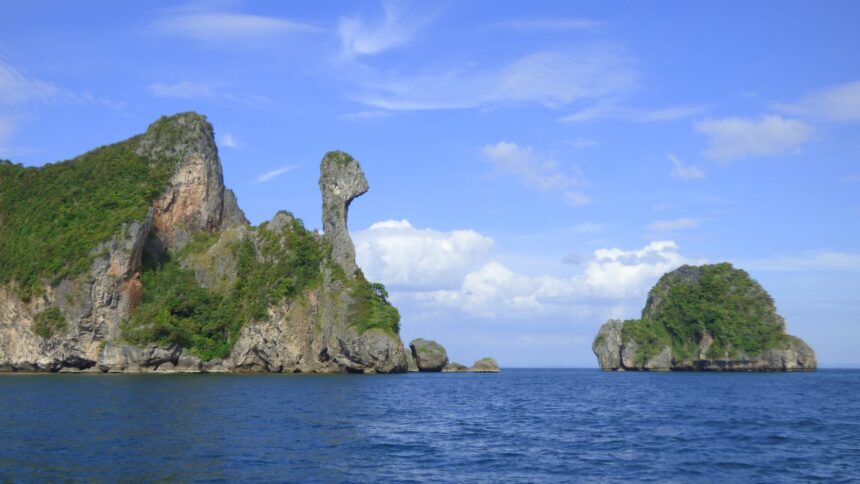