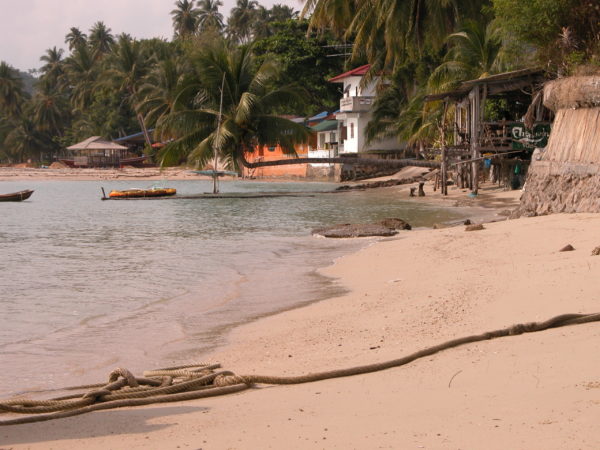 1. For first-timers of a Thailand beach vacation, Koh Samui could be one of the most suitable choices

2. Not too small, not too big, there are many activities, at the same time easy to find romantic spots.

3. In the evenings, the lovely atmosphere on the shore of Chaweng Beach with cafes, bars placed on the sand.

6. Hire a tuk-tuk to tour the island as a one-day program

7. Cross to Koh Phangan for a day

8. The cutest airport in the world

9. The small Silver Beach at Lamai, perhaps the most beautiful beach on the island

10. The interior of the island is also beautiful, unlike in Phuket.

1. On Beach Road of Chaweng Beach, the narrow sidewalks, or lack of sidewalks annoyed us in crowded evenings

2. There are no such excellent boat tour destinations like from Phuket

3. The excessive ticket prices for the major Thai boxing shows

4. The tides often wholly wash away the shore.

6. Overtourism, overdevelopment, less and less free space, nature, so the island is on the way to lose its original attractiveness.

7. In high season (late December to late February), the congestion is too high.

8. Action is too much concentrated to one place (Chaweng)

9. When there is heavy rain, moving around is getting too difficult

10. There are dirt, rubbish, empty plastic bottles in many places (including at the tourist attractions - Thais ignore rubbish bins 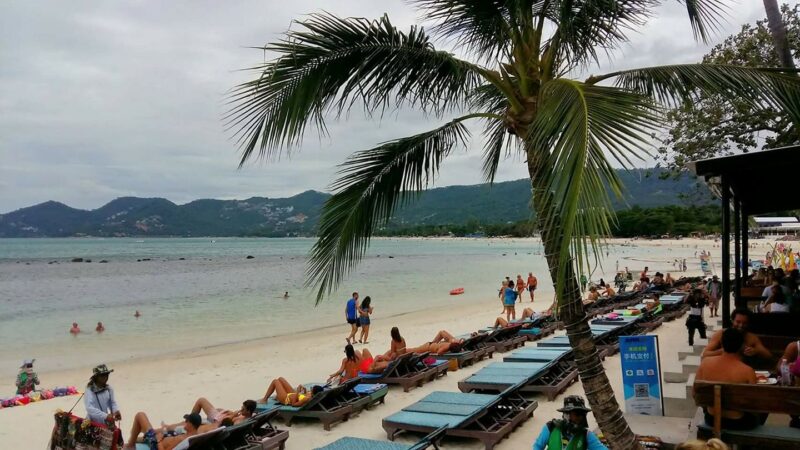 “The biggest disappointment for me was Koh Samui, which was damned expensive. Wherever there’s any life, there are so many people you can hardly move, and where the resorts are, it’s indescribably boring.”
-----------------

“I always shake my head whenever I read some tourists complain that there were lizards crawling on the walls of their hotel rooms on Samui. They’re referring to geckos, which in my opinion are charming, decorative creatures, and entirely harmless. They are afraid of people and only stray into their proximity by accident. Anyone who chooses to vacation in the tropics ought to accept that in principle, it’s simply impossible to keep the wildlife entirely outside the four walls of a hotel. Yes, you might find some bugs in your room, but no venomous spiders, snakes, scorpions, or the like – just harmless little creepy-crawlies.

I do accept, however, that the stray dogs on the streets and beaches of Samui are a nuisance. They are, for the most part, miserable and neglected-looking mutts, covered in oozing wounds, so I wouldn’t pet them if I were you. All the same, believe me when I say that they don’t bite. In fact, they’re a very cowardly bunch, and have a well-founded fear of humans (the locals frequently beat them).” (Bubi, 2018)

,, Scooter is the cheapest way to go around.  Rent for one day is 200 Bath, for three 500 Bath.  Taxi is very expensive. Even a short distance, you pay  500 Baths.
I was stunned that no one drives too fast on the island. The average traffic speed is 35-40 km /h, and if we deviated from the main road, we could see almost no other vehicle." (2019)

“We’ve been obliged to spend a disproportionate amount of our spending money on transport. Samui is a large island (the coast road runs to some 50km) so you really can’t just walk – or perhaps only if your hotel is right by the beach, and you have no interest in seeing anywhere else. Taking advantage of this, a taxi monopoly was established, which then displaced all other forms of public and private transport, including the tuk-tuk and the usual Thai buses – there is no public transport whatsoever. Taxis are, accordingly, quite expensive (for example, a short drive from Bophut to Chaweng, which is around five-six kilometers, costs 300-400 baht). The only other option is to hire your own vehicle, for instance, a moped. I don’t recommend this on Koh Samui, however, even for experienced motorcyclists: tragically, foreign tourists die on Thai roads almost every day, in accidents caused by bad roads, chaotic driving standards, alcoholism, and so on. Of you aren’t confident on a motorbike in Thailand, don’t risk it, and even if you are, do so only with the utmost caution.” 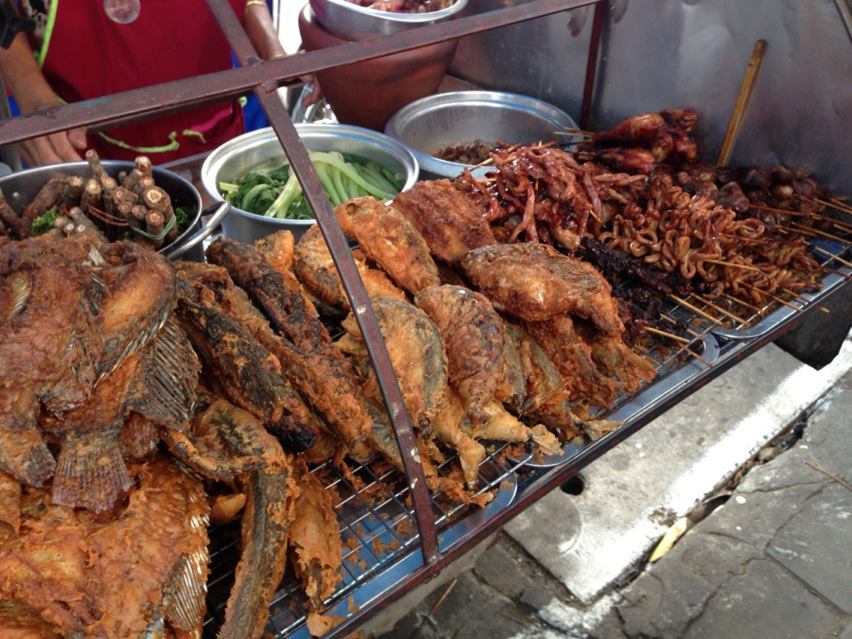 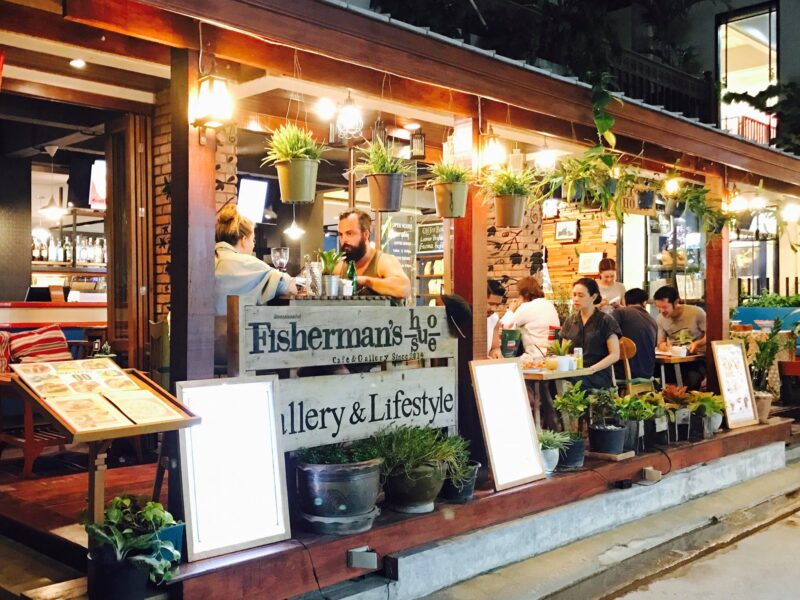 “The beaches in the north aren’t very wide, and the sand is a disconcertingly yellowish color. On the beaches of Bophut and Maenam, meanwhile, the sand is very coarse. They are also quite steep, and you can’t walk along with them comfortably. The advantage here compared to Chaweng is that the sea deepens sooner here, and you can reach swimming depth more quickly. This is good for adults, but not really for young children, or for adults who only want to paddle. The most beautiful part of the beach is located at Santiburi  Beach Resort. Bophut’s waterfront is worth visiting for its attractive dining options.

At the northeastern tip of the island, the palm-fringed beaches of Choeng Mon are beautiful, and it’s no surprise that so many hotel complexes were built here. In the south, most of the beaches are covered in rocks or pebbles. In the south, it’s easy to take beautiful pictures, but the shallow water makes swimming impractical.

In the east, Chaweng Yai beach is the longest (approx. 6km) and the broadest, and it curves beautifully around a natural bay. Again, no prizes for guessing why so many hotels were built here. The beach and nightlife are a lot of fun, but it’s not a very calm, relaxing kind of place. From December to March, and again in July and August, there are big crowds here. In the evening, when the sands are illuminated by torches lit around the cafés and bars, the effect is very pretty. The biggest problem with Chaweng is the big difference between high and low tides at different times of the day.

Chaweng Noi (Small Chaweng) is quieter, yet still very beautiful. It’s also much shorter, however, at only one kilometer long. Some consider Chaweng Noi even more beautiful than Chaweng Beach. Others particularly recommend the beach at Lamai, which is also very beautiful, and quieter than Chaweng. Lamai Beach is the second-longest on the island. It’s good for bathing and swimming, has fine white sand, and at low tide, it’s also broad enough. The palm trees look good, too. On the west of the island, there are very pretty private beaches south of Nathon. The most beautiful is Taling Nga Beach (often written as one word: Talingngam). Sunsets here are spectacular.”

“Between June and October, box jellyfish pose an appreciable danger to bathers. It’s very rare, but one or two people have died on Koh Samui from box jellyfish stings. More usually, however, the stings ‘only’ result in agonizing pain. The tendrils of the box jellyfish can be up to three meters in length, and the poison affects both the nervous system and the heart. In fatal instances, the bather was badly stung, and subsequently drowned.” (K.J., 2016) 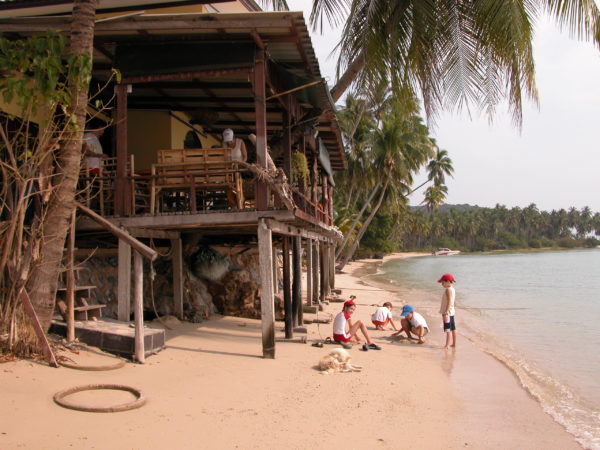 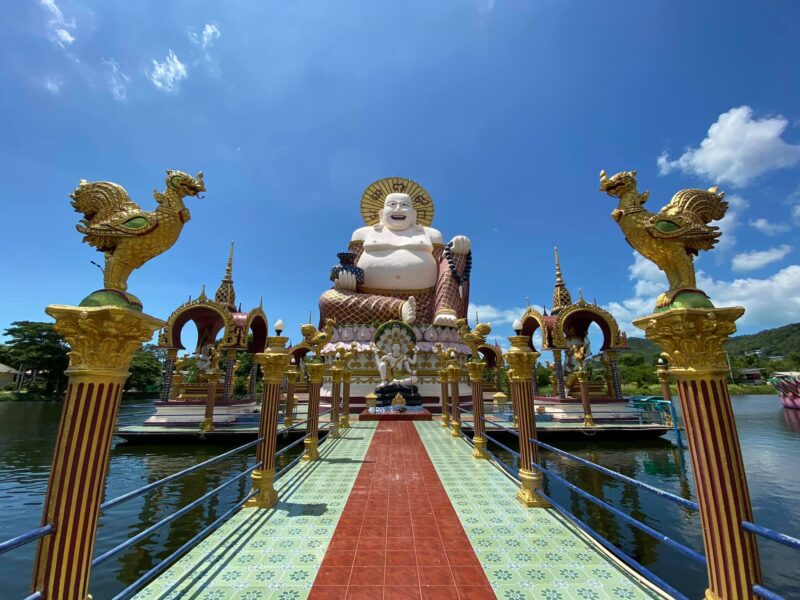 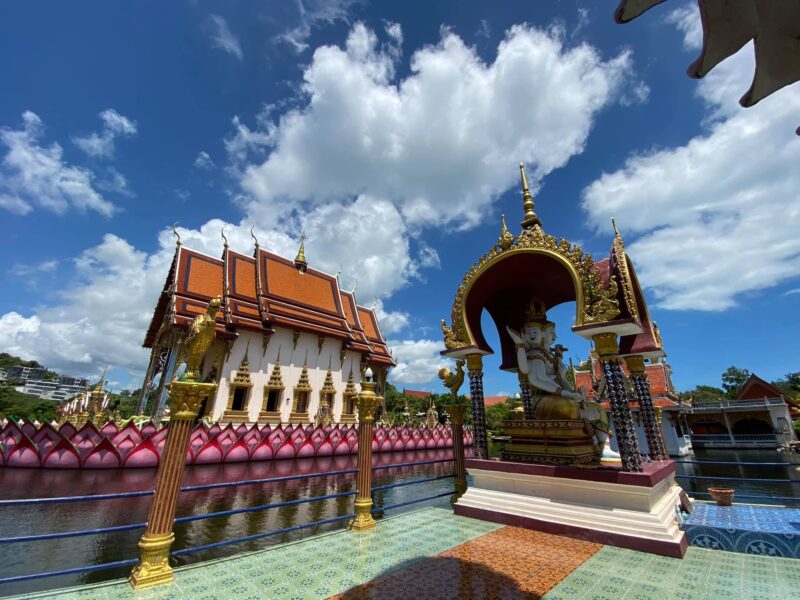 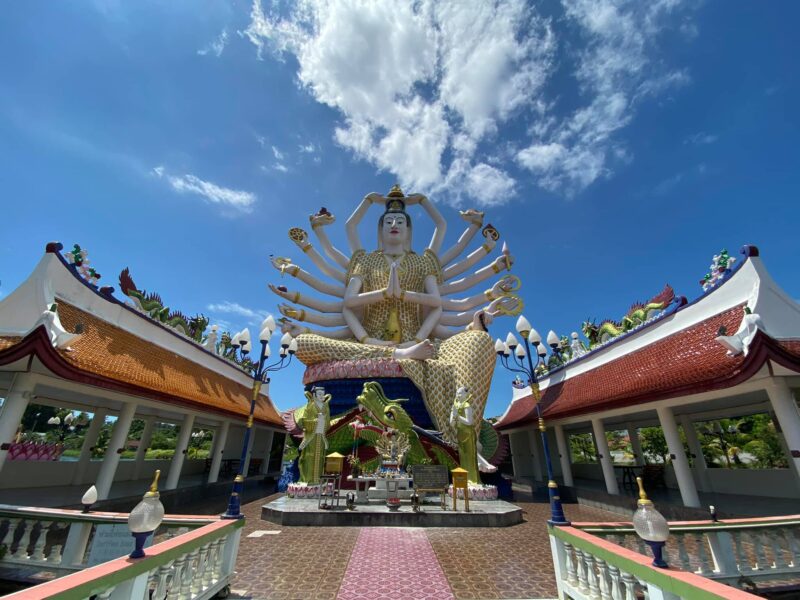