1. For the time being, it is still a relaxed, youthful, party-filled island, but for how long?

2. The island has an optimal size, not too big, not too small, easy to discover

3. The tourist clientele is sympathetic

5. Not as overdeveloped, touristy, and crowded as Koh Samui

6. The island is beautiful, and most of its coastline is downright dreamlike, with beautiful sunsets from Bottle Beach, lots of palm trees

8. Cheaper than Phuket or Samui (although many disagree with this statement)

11. Beaches are nicer than the ones of Phuket and Koh Samui 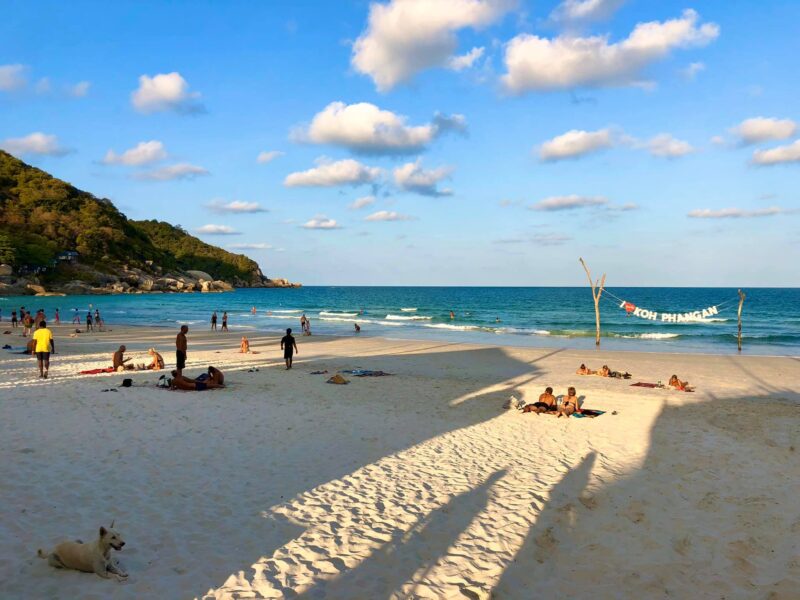 1. During the Full Moon parties, especially in early January, all accommodations are totally full

2. There's a lot of rubbish in the party places and the totally drunken men

3. The roads inside the island are too adventurous due to their condition (many unpaved sections)

4. It is often difficult to get to the island and from there back to Samui

5. There are few 3-star hotels

6. Lots of pseudo hippies (they have more money as they pretend) 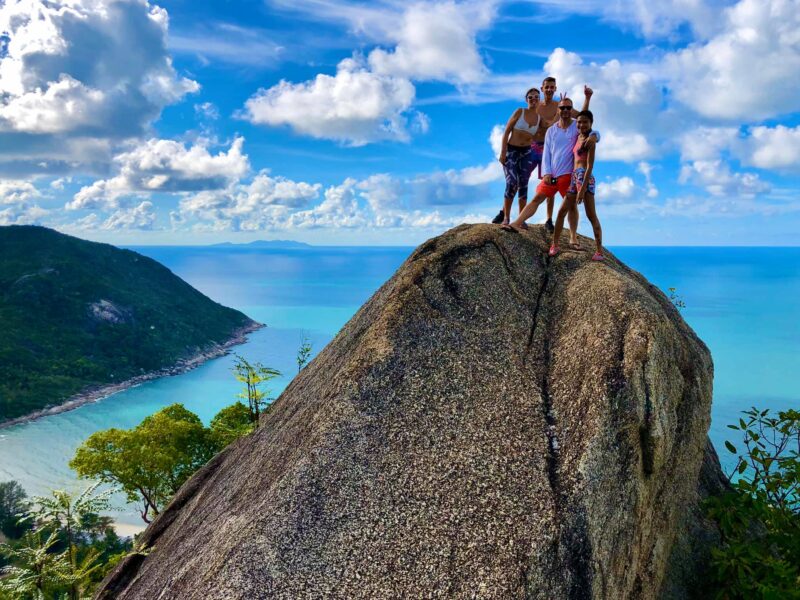 “Koh Phan Ngan is like Koh Samui was fifteen or twenty years ago. Even a few years ago, Ko Phan Ngan was ruled by young backpackers, who stayed in cheap accommodation, amid the most beautiful surroundings. The island is currently undergoing a transformation, in that it’s still dominated by backpackers, but there are more and more four- and five-star hotels, and it’s very apparent that it is being developed with richer holidaymakers in mind. All the same, it’s still a quiet, idiosyncratic island, where the silence is only broken by the occasional monster party.

The most beautiful part of the island is the northeast coast, and particularly the beaches of Thong Nai Pan and Thong Nai Pan Yai. These are places that could, without exaggeration, be called corners of an earthy paradise. This is also where the island’s best hotels are located. Thong Nai Pan is a pleasant little village, in idyllic surroundings. There are lots of restaurants, bars, and grills.” (2016)

“We loved Koh Phan Ngan. One thing’s for sure: this place has its own special magic. Some argue it’s like Koh Samui was twenty years ago, while others simply say that one visit to Koh Phan Ngan is more worthwhile than any number of trips to Koh Samui. I’d agree!” (2017) 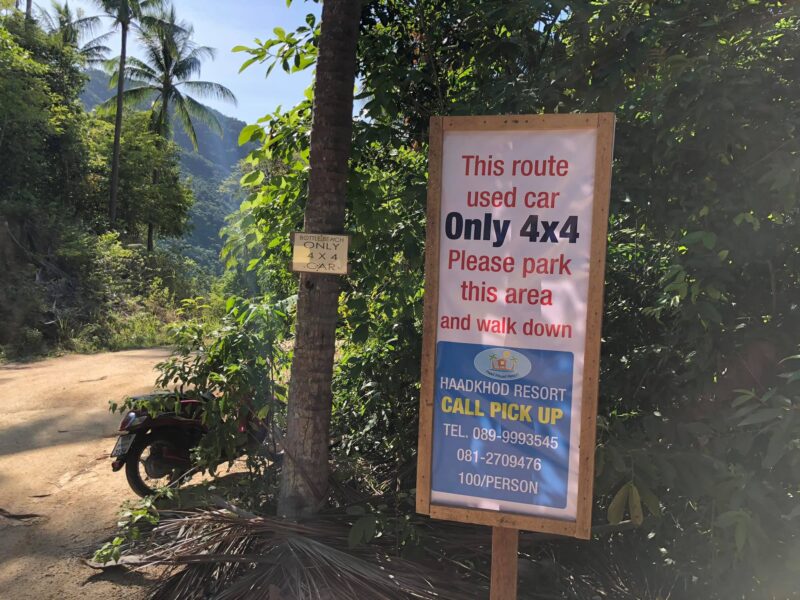 We mostly used our mopeds to travel between the port city, Thong Sala, and Salad beach. One of our favorite restaurants, called Restaurant Sunshine, was also in this area – they cooked the best food we ate during our whole month in Thailand: Tom Kaa, green curry, red curry… yummy! Everything, in fact, except for Tom Yam, which I didn’t like.

Wherever I went on Koh Phan Ngan I never found tasty Tom Yam. (If you’re curious, the restaurant is opposite the Nice See Resort, on Hin Kong Street).

There were several markets around the harbor, each open at different times of the day:

Phanthip Market – Good for evening meals. Everything can be found here, from bugs to fish and sushi.

Walking Market – every Saturday from 5 pm Chinese Street is flooded with vendors selling food, drink, and clothes. I don’t have many pictures, because not only did we arrive after dark, but specifically the moment when the power went out all across the island. We walked for an hour, by the candlelight of the vendors, trying to decipher what we were eating and to navigate it to our mouths.

And if we ever felt like eating street food by daylight, we went to the Big C Market, which is also close to the harbor.” (2017) 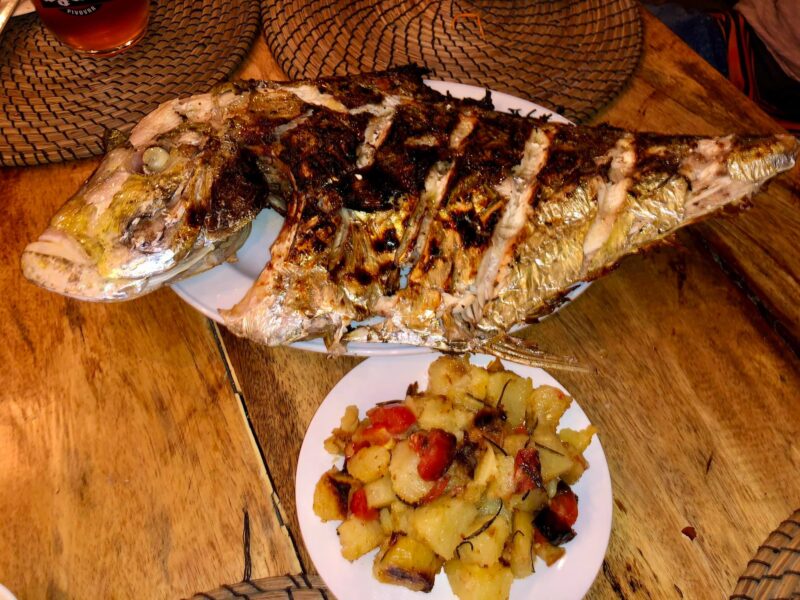 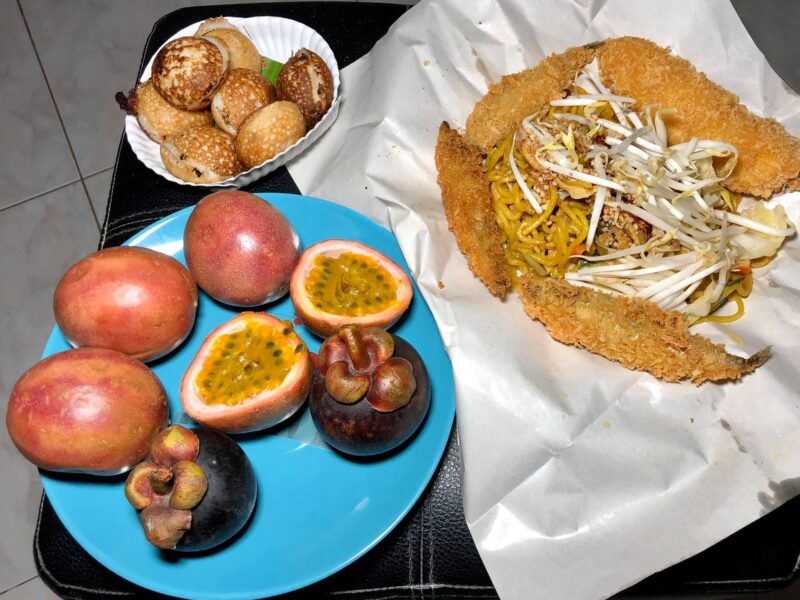 1. “For the first few days it was strange to encounter so many animals – especially bugs, spiders, ants, and lizards. Then we got used to them, and they didn’t bother us anymore. All the same, I was still a bit nervous about the mosquitos – a friend of ours picked up a roundworm infection from a mosquito bite last year, and it took him a month to get back on his feet.

If the windows in the bungalow don’t close properly, seal the gap with a towel to prevent anything coming in at night. When it comes to ants, there are at least ten varieties: little ants, fast ants, red ants, giant ants, two-part ants… we had time to observe them and gave them these names. 😊

Once, hundreds of bees suddenly appeared on the flowers of the palm tree directly in front of our terrace. These don’t bother you, but a couple of 5-inch killer hornets also appeared. When they did, we retreated to the safety of our bungalow at lightning speed.
In the morning there were so many animal noises it was as though we had woken up in the middle of a concert – or perhaps a zoo. You could set your watch by the time you first heard some of these animals. Whenever hundreds of ‘dunnos’ started singing, we always knew it was six thirty in the evening.

One day I was lying in the hammock when, all at once, a snarling monkey appeared beside me. I was so surprised I hardly knew how to act. I’m sure he didn’t want to hurt me, but I still knew I’d feel a whole lot safer behind the door of the bungalow. 😊

What I loved most were the palm trees, the flowers, and the fact that everything is so green. Sometimes it was nice just to lie back, think of nothing, and enjoy the sight of the sea and the palm trees. 😊 At first, we didn’t pay much attention to where we were sitting, but after seeing a coconut thump down right next to a sunbather (lucky man) we started paying attention to that, too.”

----------------------------
2. “Every six months or so, some idiot thinks it will be a good idea to sell drugs on Ko Phan Ngan since there are a lot of parties and a lot of people, but the drugs are more expensive and of lower quality than those sold in Europe. These efforts are always short-lived and end badly. First, they take all the dealer’s money, then he’s imprisoned for between five and twenty years, and finally, he’s barred from entering Thailand again for a further ten years! It’s something that the Thai people and their justice system have zero tolerance for. Don’t think of trying anything of the sort, since, after 20 years in Thailand, I’ve still never heard of anyone succeeding in that game.

Psychotropic substances that grow naturally in nature (weed, mushrooms, leaves, nuts, etc.) are more tolerated, and cannabinoids were legalized for medical use in November of 2018. It’s rumored that it will be fully legalized within a year! It’s already being grown on a large scale so that the situation won’t be the same as in Canada – there will be a large supply available on the day of decriminalization.” (o.a., 2019)

The largest and central town is Thong Sala.

Significant life is concentrated in coastal areas, especially on the west coast. The southern tip of the island (Haad Rin Nai) made the island famous for its Full Moon parties.

The island doesn't have an airport yet. Most people get to the island from Koh Samui by ferries. The journey time is only 20-30 minutes,

The monsoon period runs from September to mid-December, and the most pleasant weather is from January to April.