1. Ethiopia is an immense, open history book for visitors – fascinating past, rich cultural heritage, almost a non-African country in Africa

2. We did not expect to find such a diverse fauna

4. We bought some exceptional paintings in Addis Abeba’s main market 5.    The coffee is excellent, tasty, strong – after all, Ethiopia is the homeland of coffee

6. The air is noticeably fresh in Addis Abeba at over 2300 meters’ altitude

7. To see the throne and tomb of the late emperor Haile Selassie (killed in 1975), revered as a quasi-god by Bob Marley

8. Most locals seem hard-working and dignified

9. Good food, not too spicy – delicious fresh fruits (even strawberries)

10. Accommodation is not too expensive

1. We had to give tips to all the different local guides although we had already paid a main guide for all the programs

3. Some terrible housing blocks built during the country’s pro-Soviet regime in the ‘70s and ‘80s

4. Market ladies strongly warned us not to take any pictures of them

5. We could not visit many churches because they were closed

6. Deep poverty even in Addis Abeba outside the city center

7. We could not visit areas close to the borders of most of the neighboring countries, as they are dangerous

8. At the airport when leaving the country, we could not find any way to spend the local currency we had left

“In 2017 I was lucky enough to spend a little time in Ethiopia, where I met a lot of very kind, decent people. I salute them. Poverty is widespread, but they’re working to improve the situation, one step at a time. They don’t immediately rush up to every white person they see to ask for money.

There are a lot of young mothers who carry their children on their backs.

The food is extremely good, with herbs and mild spices. The fruit is also delicious – usually they’ve plucked it off the trees that very morning: oranges, melons, strawberries, pineapples, mangoes, avocadoes…

The hotels are comfortable and well equipped, and comparatively cheap: $70 a night, including a buffet breakfast. (La. 2017)

Addis Ababa is a rapidly developing and growing city (current population seven million) and is also the headquarters of the African Union and the UN’s African offices. At the airport the current terminal is being expanded, and a new one is under construction.

There are countless buildings under construction in the Bole neighborhood (each at least ten stories tall) and new metro lines paid for with loans from the Chinese government.

The city sits at an altitude of between 2300 and 3000 meters, and the sight of middle-aged Chinese ladies dizzy from altitude sickness is already a common one.

The Bole neighborhood, next to the airport, is a totally modern area with malls, restaurants, entertainment centers and new hotels.

It’s a one-day sort of place. All local DMCs (destination management companies) offer a 4-5-hour city tour taking in the university museum (ethnography, crosses and icons, Haile Selassie’s bedroom and bathroom, etc.), the National Museum (Lucy and other prehistoric humans and primates found in the country, as well as the imperial crown), the view from Mount Entoto and a visit to a church. There’s a large market too, and apparently it’s great (I wasn’t there).

For me, the highlight was the 2000 Habesha restaurant – buffet food accompanied by a traditional music group, with singing and dancing, to showcase the country’s regional diversity (there are eighty separate regions).

In the Bole District you can stay in a very satisfactory four-star hotel for around $80-100 per night.

The locals are very pleasant and agreeable, and most people working in tourism speak English to some degree.

Public safety seems ok. In many places there are electronic gates, and there’s a security check at some museums. (bono, 2018) 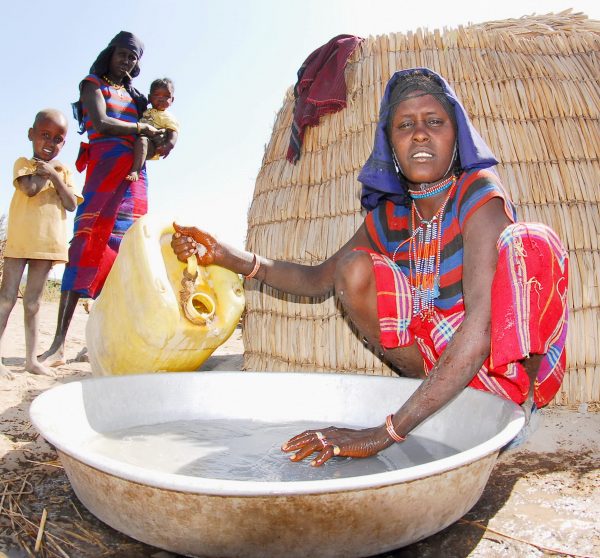 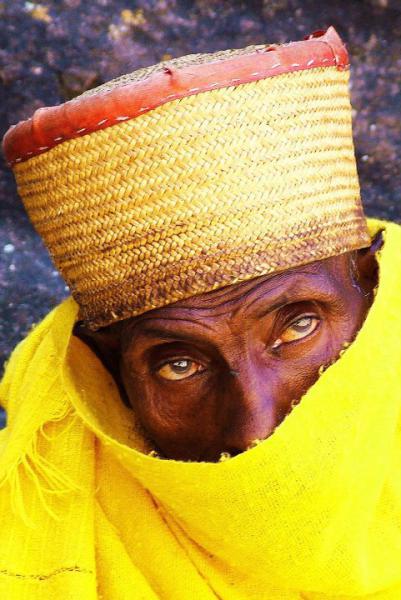 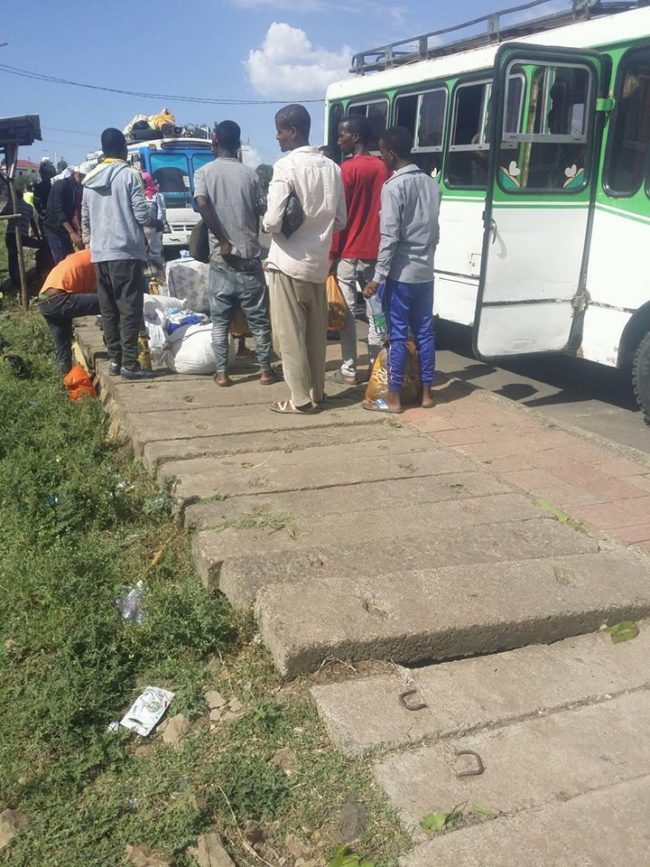 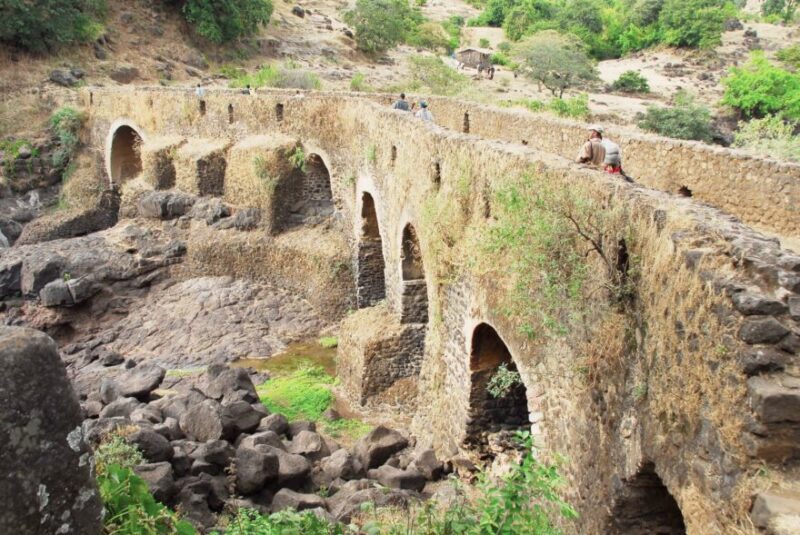 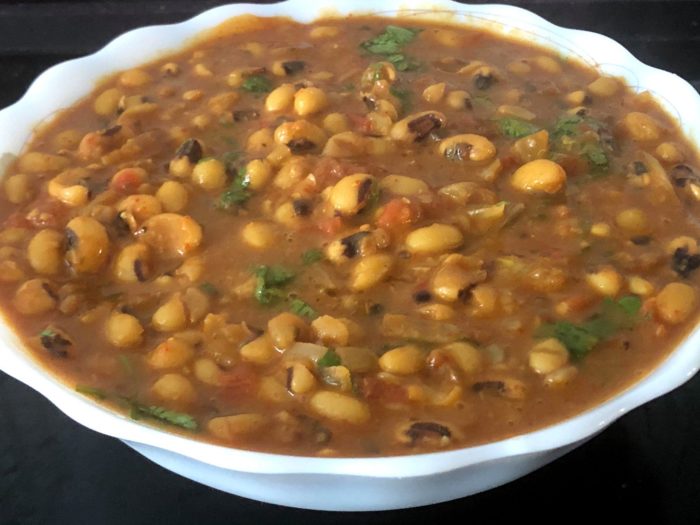 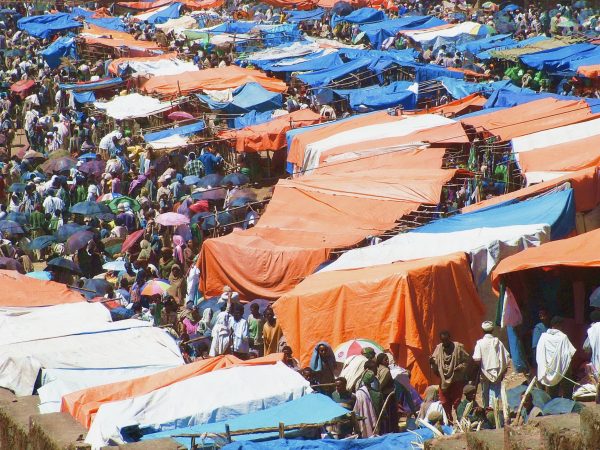 2020 November update: War in the Northern part of the country. A period of consolidation and progress came to an abrupt end in the ancient African country while millions of middle-class people were considering emigrating. 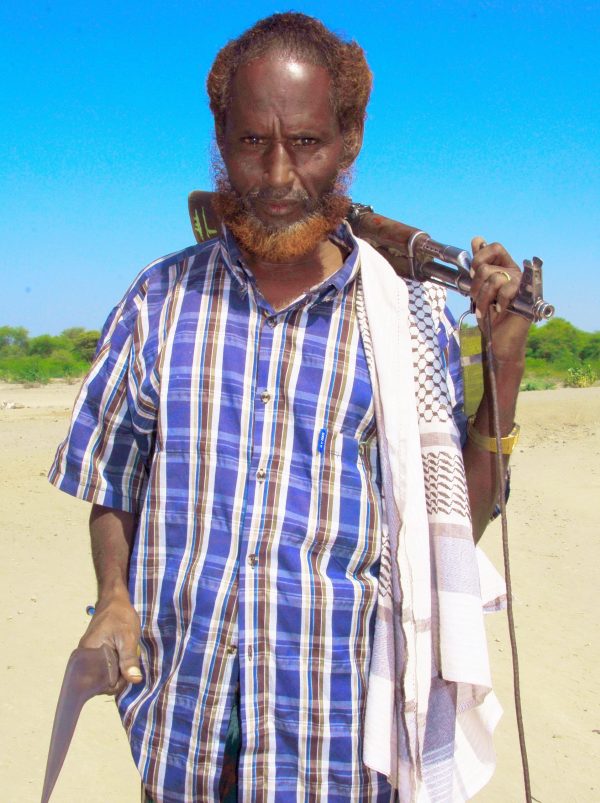 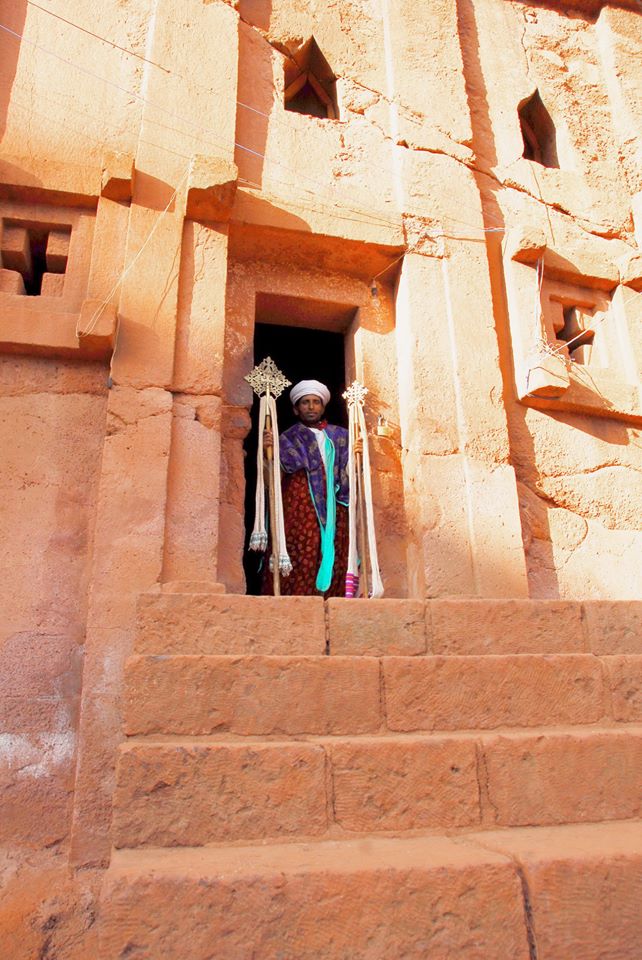 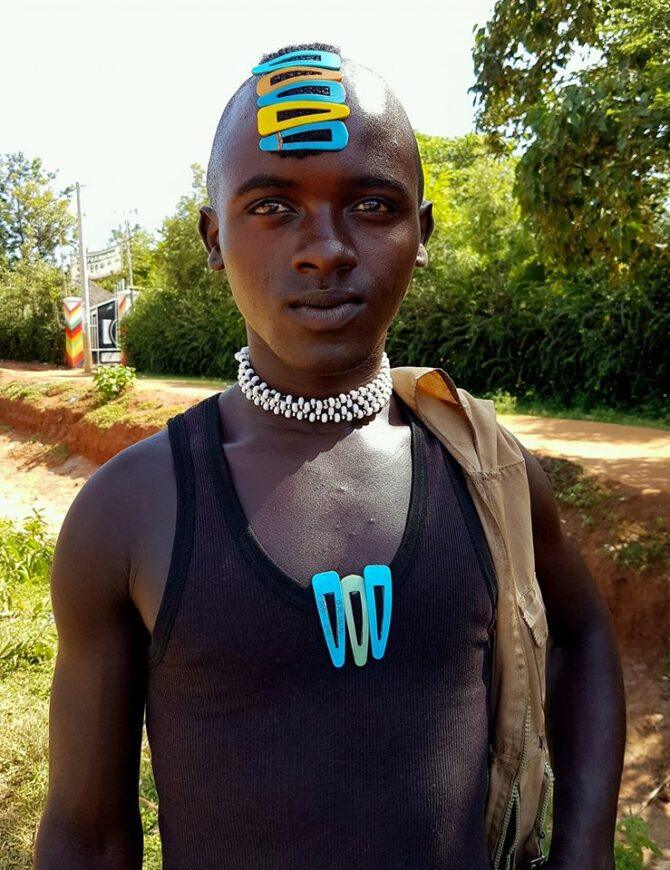 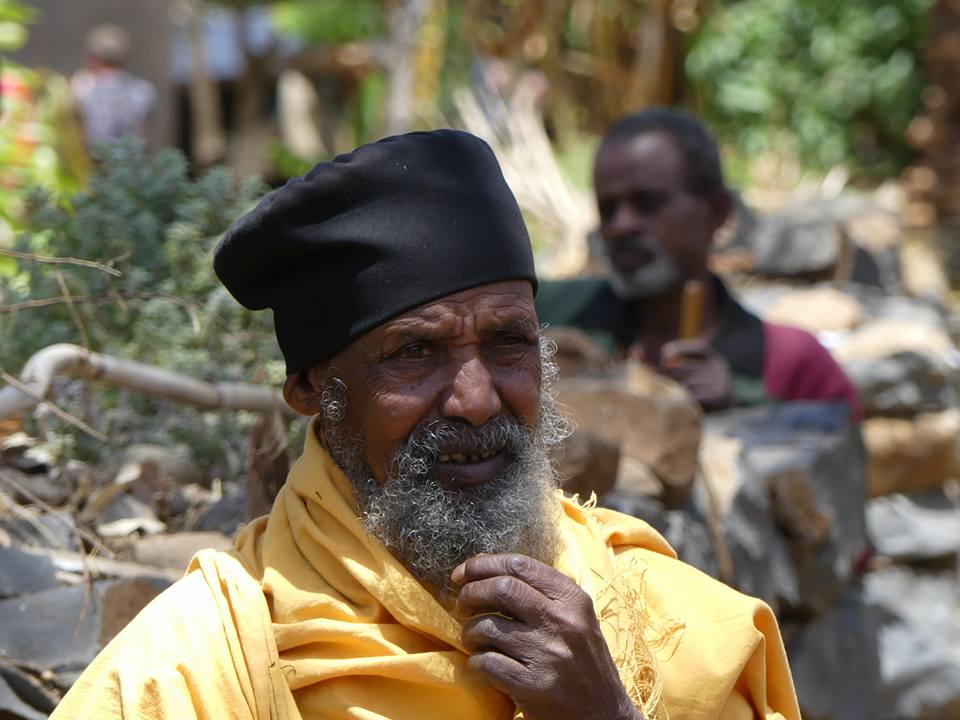 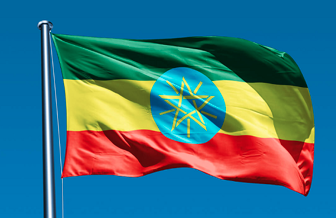 Between the 3rd and 5th centuries A.D., significant parts of the present-day country belonged to a powerful kingdom that ruled upon one the great civilizations of its time. Ethiopia is the only African country that was never colonized!

Capital city: Addis Ababa – Located at an altitude of 2,370m (7,775 ft) above sea level – Mercato, the market in the heart of the city, is the largest in Africa.

Population: 113.8 million (2020) – The Amhara, Oromo, Somali and Tigrayans make up more than 75% of the population, but there are more than 80 different other ethnic groups.

Language: Amhara, Tigrinya, and Oromo are the official languages – 81 other local languages exist  - English is not spoken well outside Addis Ababa.

Many Ethiopian languages use the Ethiopian, or Amharic alphabet. Although it has been tried, there is no standardized method of writing down the Amharic language in Latin letters. Apart from the Arabs, the Ethiopians are the only people in Africa to use an indigenous alphabet.

Religion: 60% Christian (Eastern Orthodox) (you can meet many people with a tattooed cross on the forehead or on the hand), 30% Sunni Muslim

A “divine” emperor ruled the country until 1975. A Marxist regime followed until 1995, when an almost democratic system was established.

Ethiopia is the 5th most malnourished country in the world (Haiti is number one) - Nearly 8 million people do not have the food they need, including 4.2 million children.

Ethiopia is the only country in the world to have 13 months in a year. This is because the Ethiopians continued using the original version of the calendar that the Roman church amended in 525 AD.

Safety: Ethiopia is a moderately safe country by African standards. There is a permanent terror and robbery threat, especially close to some of its borders. Tourists should be on alert because of the pickpockets.
According to the Ethiopian legal system, the minimum age of criminal responsibility is 9.

Ethiopians regard their country as the real homeland of coffee. Some locals salt their coffee or add spice to it. It is actually said that coffee was discovered in Ethiopia when a goat herder found his flock running restlessly after eating the coffee plant. 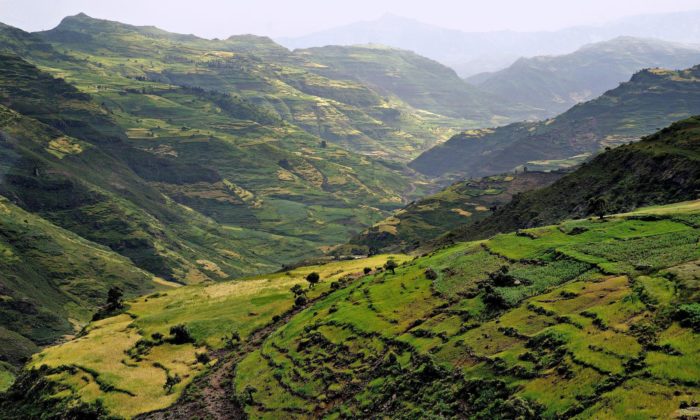 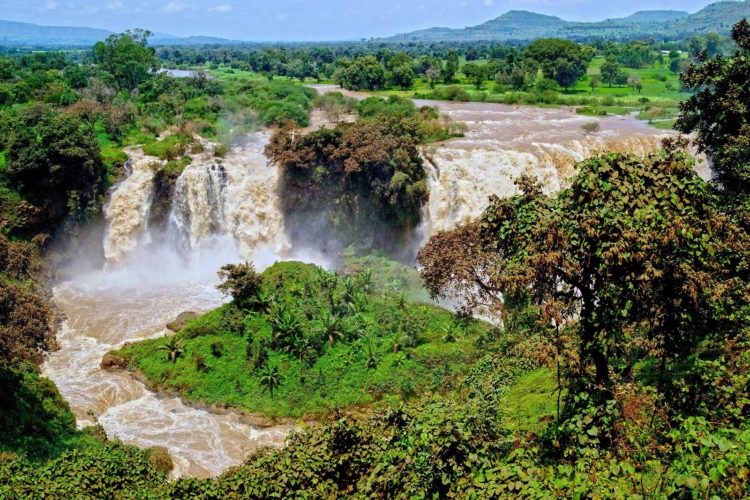 “In other parts of Africa, grown men have been known to fight over an empty plastic water bottle, but in most Ethiopian households, except perhaps for a few dirty t-shirts and a gasoline cannister used to sore water, there is practically nothing which was not manufactured in that same village. Most Ethiopians only encounter money when they succeed in getting some from a tourist; otherwise they get what they need through barter. 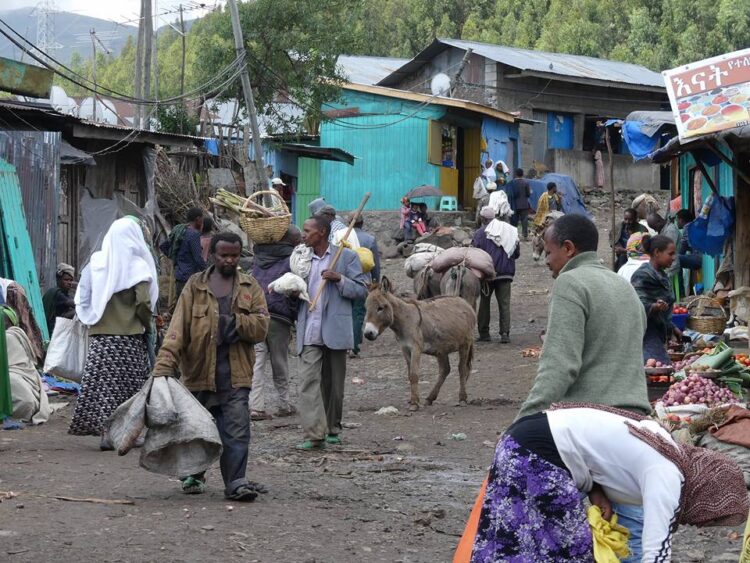 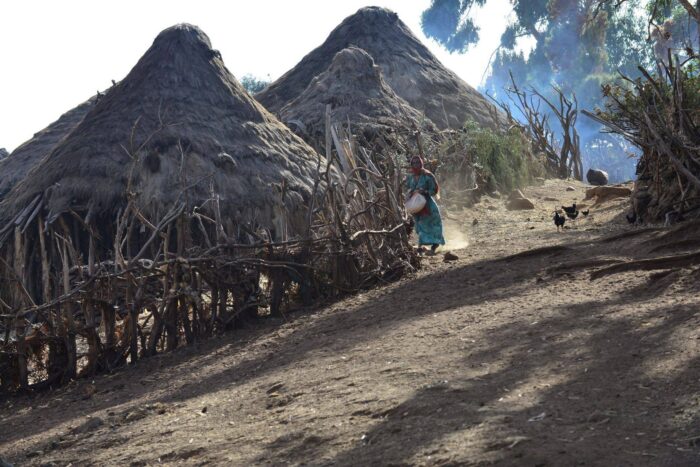 “Ethiopians from the highlands seem to have a ‘chosen people’ complex of which even the Lubavich Hasidim would be proud. The generally accepted explanation for this attitude is that the great preoccupation of the priests and emperors of Ethiopia, during their centuries of virtual isolation, was to survive, since they were the true Christians, and, later, the true Africans. One of the consequences of this is that highland Ethiopians hate the neighboring village (which they advise tourists not to visit, since they are certain to be robbed), the neighboring tribe (uncivilized savages, and nothing there worth seeing) and, if they know about them, neighboring countries too (warmongers, slaves of the West.)

From the perspective of the traveler, however, the most uncomfortable fact is that these highland Ethiopians, even if they do not exactly hate tourists, at best only tolerate them, because they see them as potential sources of money. If the Western tourist hesitates to play the role of unquestioning dispenser of moolah, he can expect a reaction more hostile than perhaps anywhere else in the world.

The tourist menu in Ethiopian restaurants is perhaps twice the price the locals pay, and taxi drivers are not content with a simple fleecing, but charge as much as ten times what they’d ask of a compatriot. Highland Ethiopians do not even seem to see anything particularly the matter with agreeing a price with a handshake, then changing it later – the kind of behavior which would quickly see you strung up by the neck in any self-respecting Arab bazaar.

By far the worst of all, however, is the constant begging. Other countries – let’s take India as an example – have a pretty bad reputation in this regard, but at least in India the begging is concentrated in the larger cities. Nobody begs in an Indian village. In Ethiopia, by contrast, it’s virtually impossible to escape from beggars, though they aren’t, strictly speaking, actually beggars. Instead, it’s that a significant portion of the population simply see it as quite natural to demand money from every white person they see, and can react quite aggressively if refused – spitting and stone-throwing are not uncommon.

Many studies have been written, examining the historical reasons why begging and charity have always been such an important part of Christian Ethiopian culture, but with the rapid spread of Western aid agencies over the past twenty years, the impression has only deepened that the purpose of white people is to give food and money in exchange for nothing. 100% of children in small villages try to extort money from tourists, and their favorite catchphrases are ‘I never eat,’ ‘I am a student, give me pen’ and, my personal favorite, ‘my mother and father are dead, please help me.’ Given the rather limited English instruction in the schools, this is generally shortened to ‘motherfather’. After hearing this for the twentieth time it’s a rare tourist who can manage anything besides a cynical laugh, but in many cases it may be true – there are few tragedies which Ethiopia’s destitution could not encompass.” 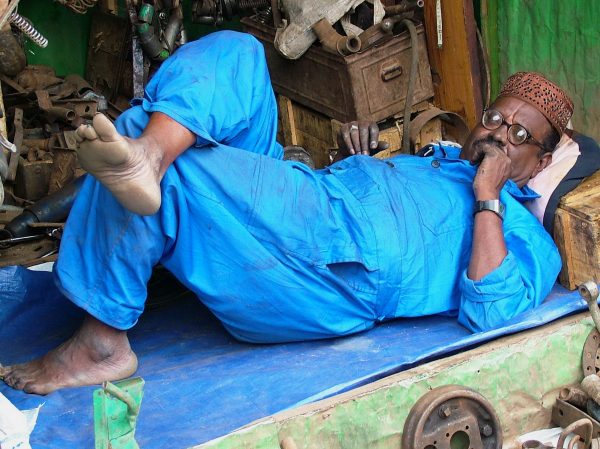 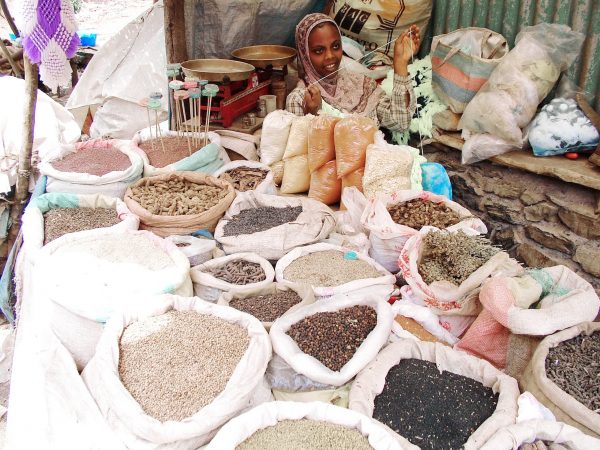 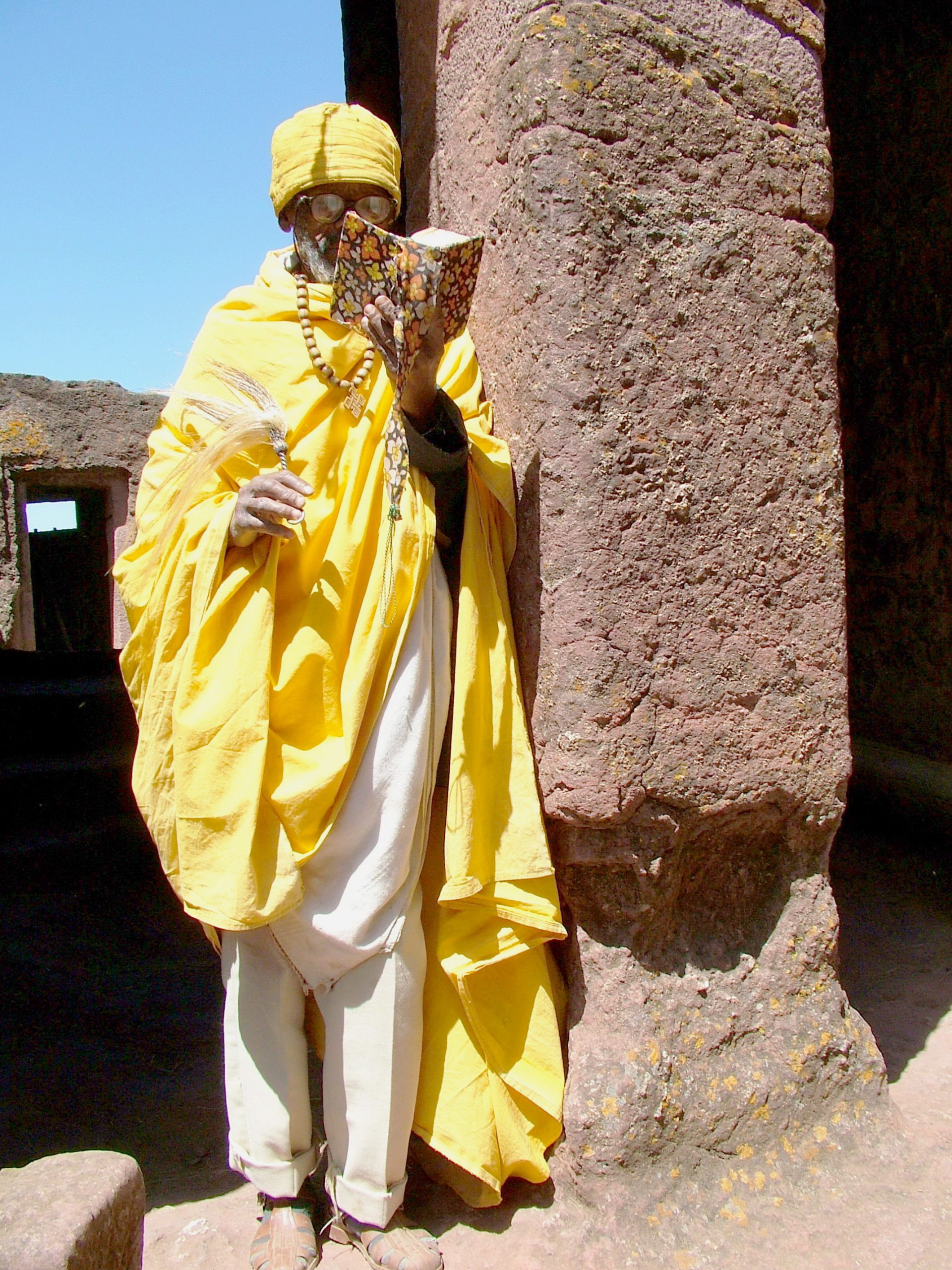 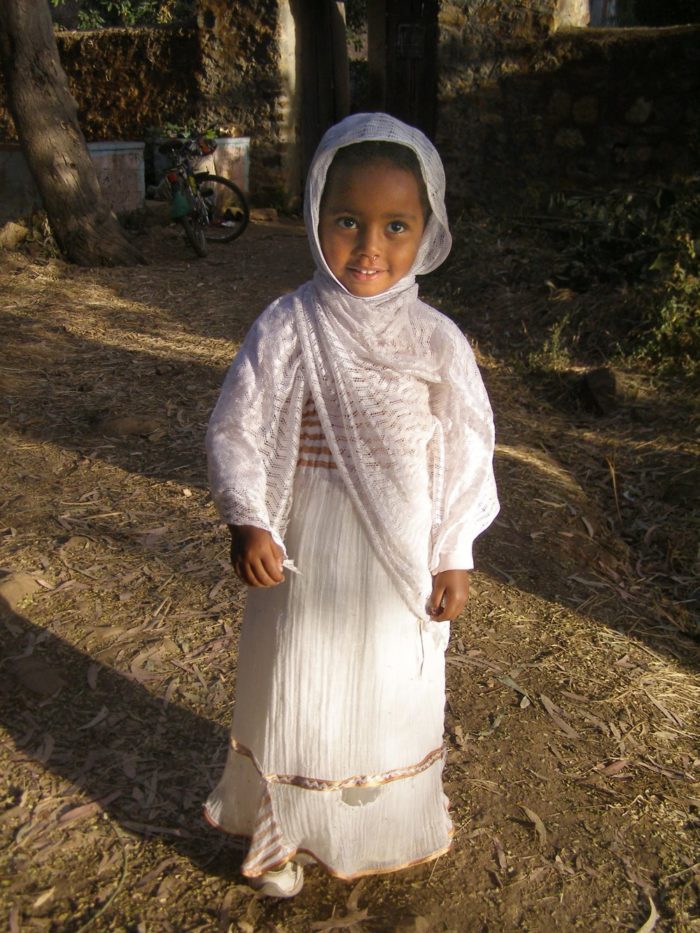 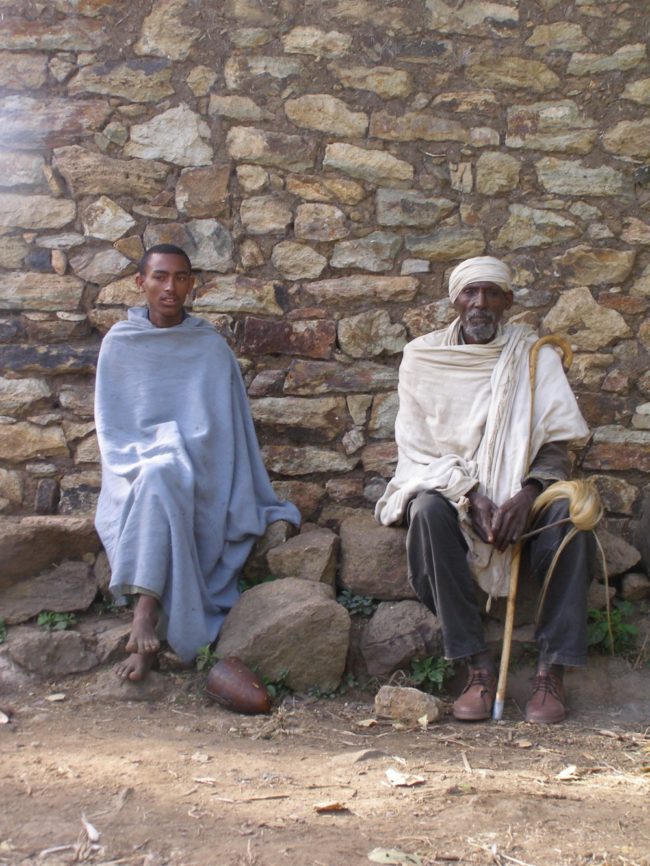 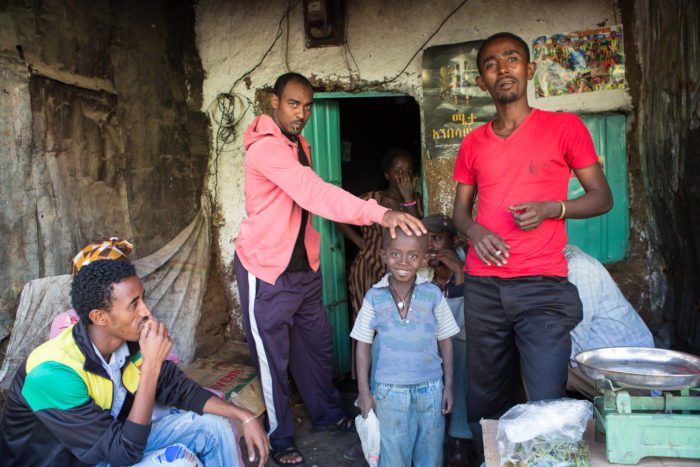 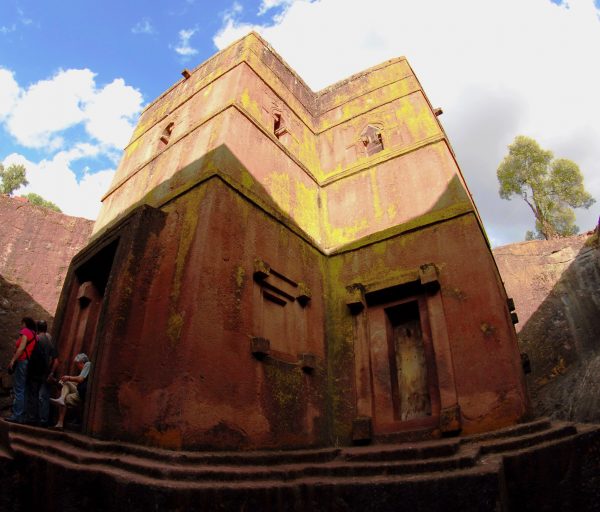 Ethiopia - Lalibela - a Bet Giyorgis from below - Elter photo 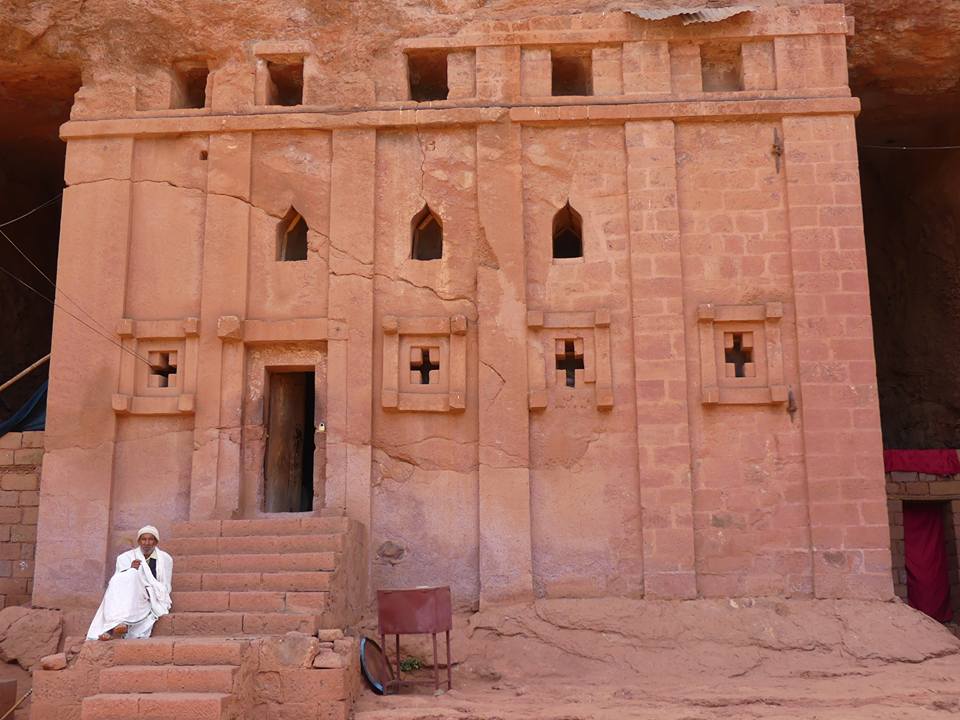 Ethiopia - Lalibela - one of the rock-cut monolithic churches - r.h. photo 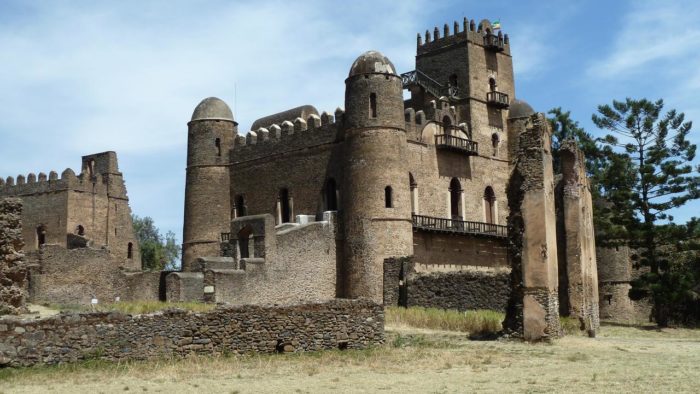