1. Abha city where it makes sense simply strolling on the streets, plus there is a fascinating market on Tuesdays

3. The bookshop of Radisson SAS in Ryadh

4. In Jeddah, I ate some delicious, exclusive dates (Ajwa, grown in Medina), the best tasting date I have ever had in my life

5. The view from the (almost) top of Al Faisaliyah (a skyscaper)

6. The magnificent view and the brilliant architecture of The Kingdom Centre Tower in Riyadh (went both in the daytime and nighttime)

7. Al-Balad, the quasi Old Town of Jeddah (far more original and authentic than the artificial Old Town of Dubai

8. Riyadh is a stunningly bustling city (eminently the Olaya Street), except on their weekends when almost all services open at 4 p.m. only)

9. Witnessing the trend that locals do not take a dim view of tourist women when they walk on the streets without any companion (by the way Saudis do not even stare on foreigners)

10. The excellent news that Saudi Arabia ends flogging as a form of punishment (it is to be replaced by jail terms, fines or a mixture of both)

1. The paining lack of visiting Mecca and Medina, which are forbidden destinations for the infidels (we happen to fit into this classification) - to my knowledge, there is no historical (not even a sacral) attraction in the world which bans Muslims (Am I wrong?)

2. All roads of Ryjadh are strictly straight resulting that the whole city has a kind of rigid, artificial character (I admit though, the main avenues look splendidly in night floodlights)

3. A bit of unsettlement for us, as a couple, when in a food court we approach the separated queues for men and women

4. Very complicated to take a photo of a Saudi, as most of them fervently protest

5. We felt that Saudis look down on foreigners, deeply on Asians, moderately, not as openly on Whites

6. To be on the Deera square, knowing that this is the very place where public beheadings happen on some Fridays after the noon prayer (before lunch?)

7. The crazy driving style of the ostentatious Saudi playboys

8. The cigarette smoke and the dirty toilets in the King Abdulaziz International Airport

9. The smog in Riyadh

10. Sitting cross-legged when having dinner in the Najd Village restaurant in Ryadh - a torture for me

11. The bad-mannered tourists in the ruined city of Mada'in Saleh (otherwise a great program) 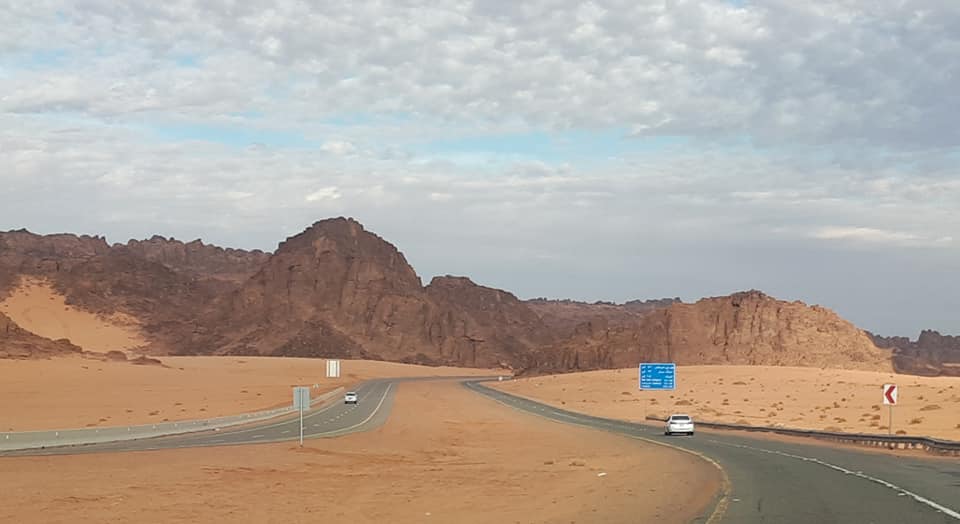 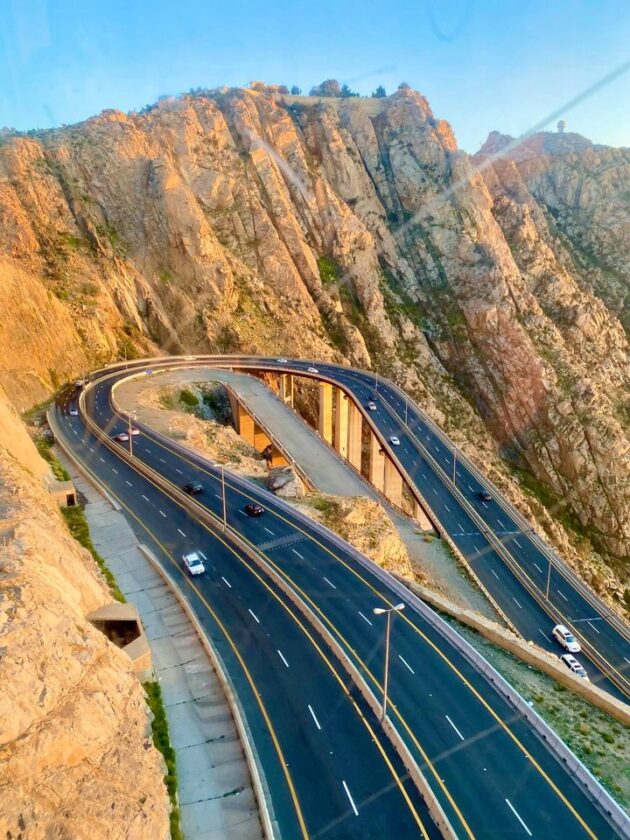 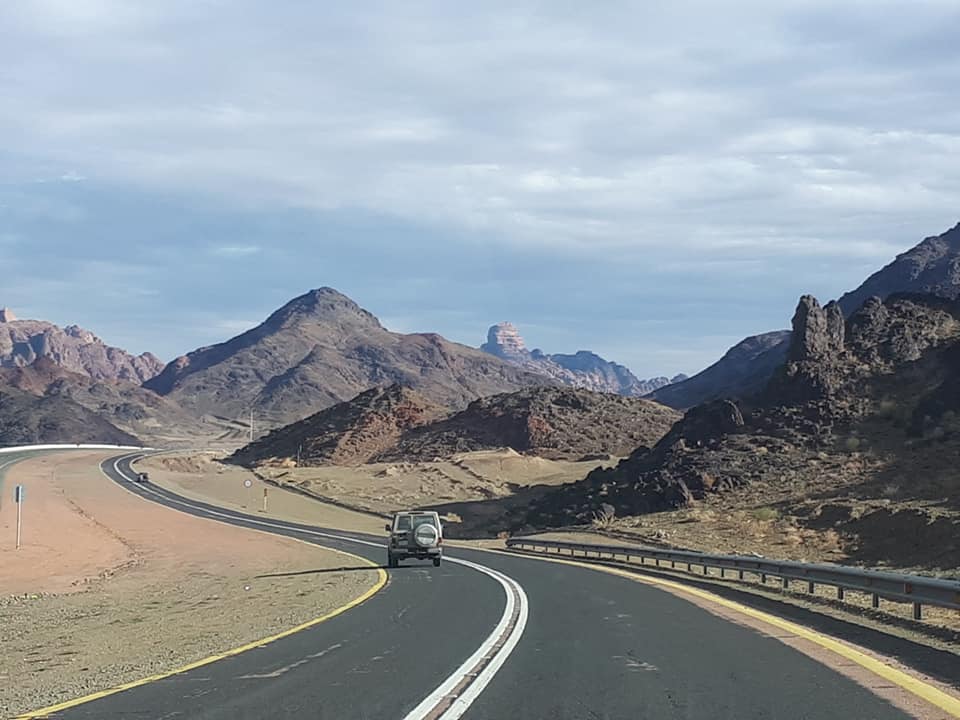 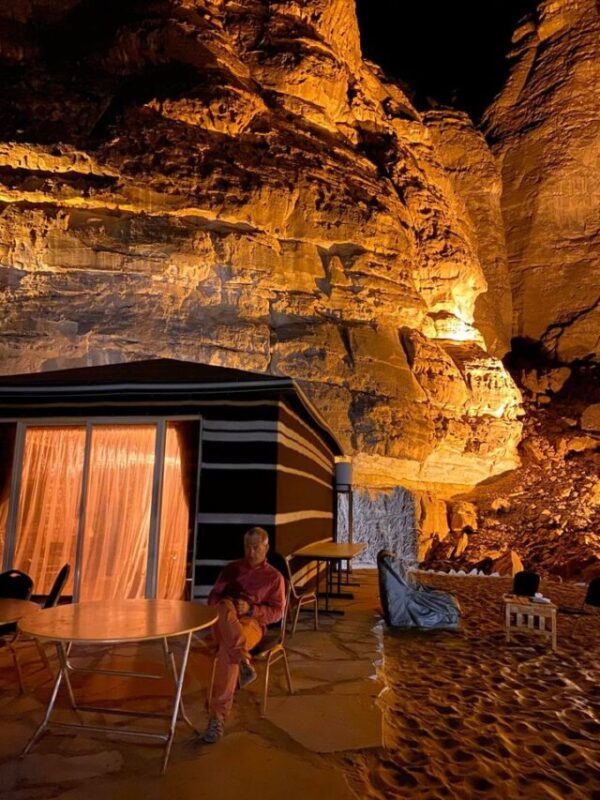 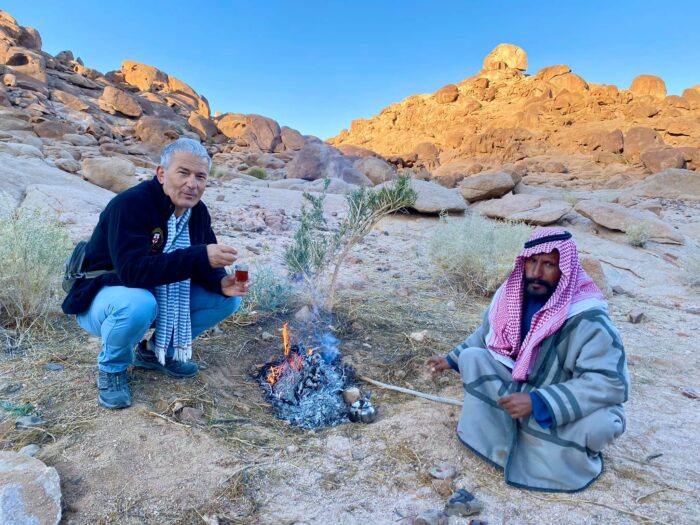 The highest point in the country is Jabal Sawda – it peaks at around 3,000 meters (9,843 feet) high. Saudi Arabia is the largest country in the world without a single natural river.

Population: 34,7 million (2020) – 32% of the country’s habitants are not Saudi citizens, but immigrant workers, many of them from India, Pakistan, Bangladesh, Egypt, Syria and Sri Lanka.

Religion: 100% of Saudi citizens are Muslim – Most of them are Sunni Muslims (in its Salafi version), and about 10-15% are Shia Muslims. Islam is the official state religion. The rulers of Saudi Arabia follow an ultraconservative (Wahhabi) interpretation of the Quran.

Political system: absolute monarchy. The King is both head of state and head of the government. There are no general elections, only municipal ones.

Saudi Arabia is considering ending beheadings as the traditional form of execution in favor of firing squads because of a lack of executioner swordsmen to be found in the country.

Saudi Arabia is one of the world’s safest countries. The country has very harsh laws and the police are practically omnipresent.

When to visit? April, May, September or November - forget about June, July or August, when temperatures often reach 50°C (122°F).

Non-Muslims (infidels) are not allowed to visit the two holy cities of Islam, Mecca and Medina, where the infrastructure for receiving visitors is well developed.

Proper tourist infrastructure in other parts of Saudi Arabia is lacking.

In Saudi Arabia, a liter of drinking water is more expensive than a liter of oil. 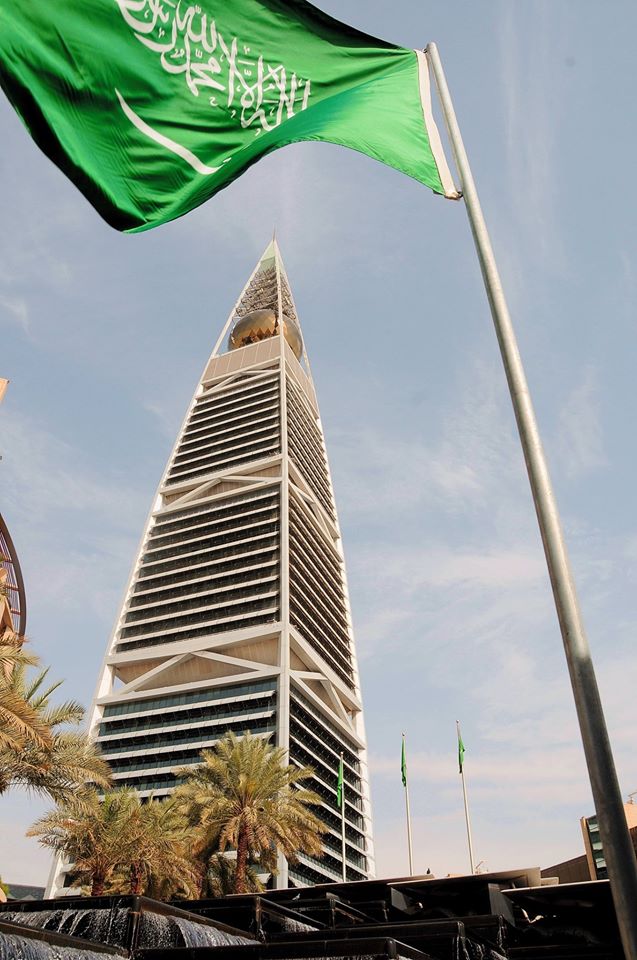 Saudi Arabia is the largest country in the world without a river.

95% of the country is a desert or semidesert. 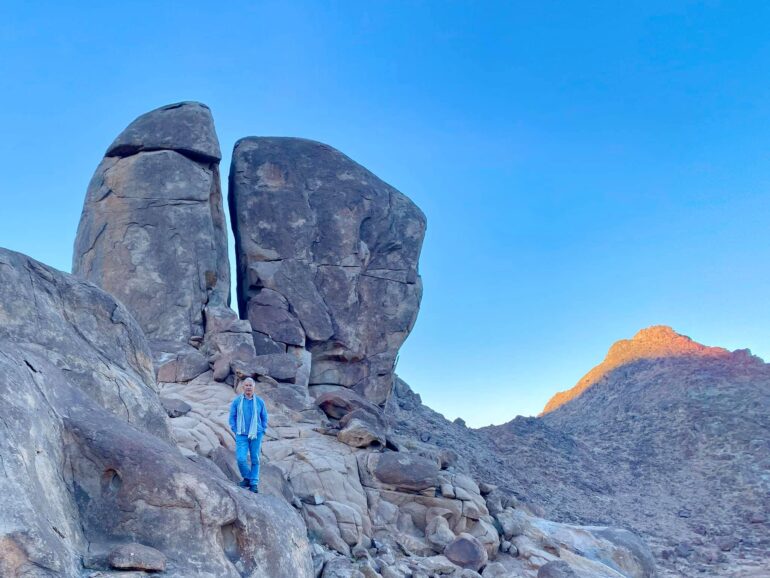 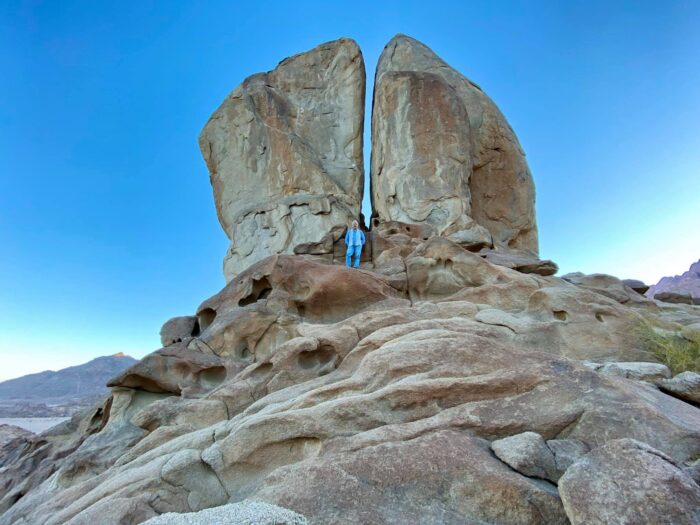 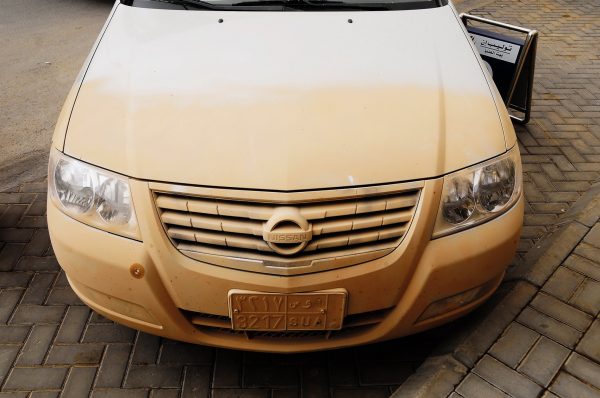 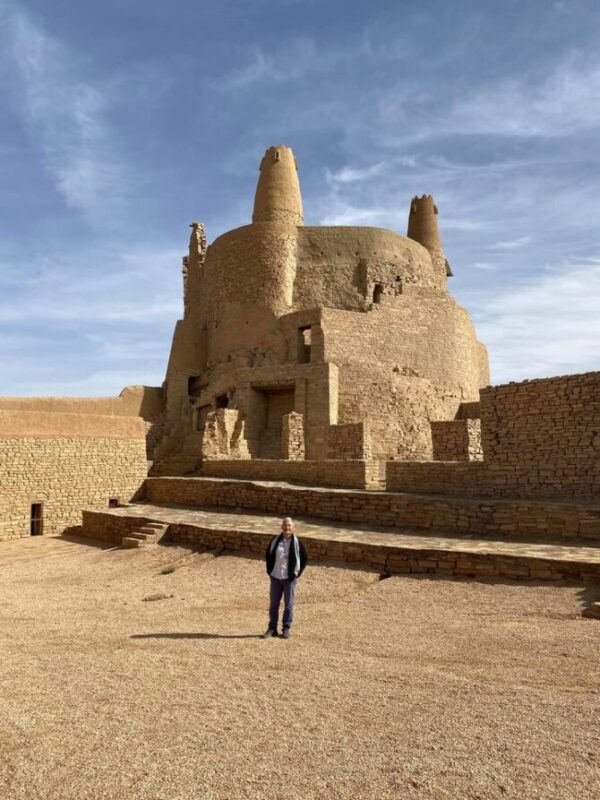 The Saudi Arabian Supreme Court has ruled that from 2020 flogging will no longer be used as a punishment. From now on corporal punishment will be replaced by fines, imprisonment, or some combination of the two. Flogging has to date been used to punish drunkenness and sexual harassment, among other crimes.
This decision forms part of a process of human rights’ reform. Other forms of bodily punishment, such as amputation for theft and beheading for murder and terror offences, have not yet been banned.

This Muslim kingdom, which adheres to the fundamentalist Wahhabi branch of Sunni Islam, implements a strict interpretation of the Islamic legal code, the Sharia. In the absence of codified criminal law, individual judges interpret Sharia according to their own understanding. (April 2020)

Fridays are unique to all Muslims, even more in Saudi Arabia. At around 10 AM, men start getting ready for the Friday prayer, and women start preparing for lunch, making Fridays unique. Some families have a tradition of having the same meal every Friday; for example, having seafood for lunch is in both Western and Eastern provinces is crucial to most families!  Other provinces usually stick with Kabsah or other dishes that consist mainly of meat and rice.
Since most shops don't open until 5 PM, young people tend to go out at night with friends to shop or watch a movie, however; more mature people tend to gather at home, grab some Arabic coffee, and chat." 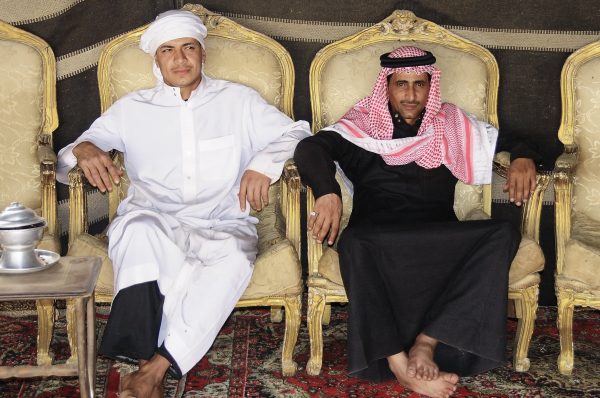 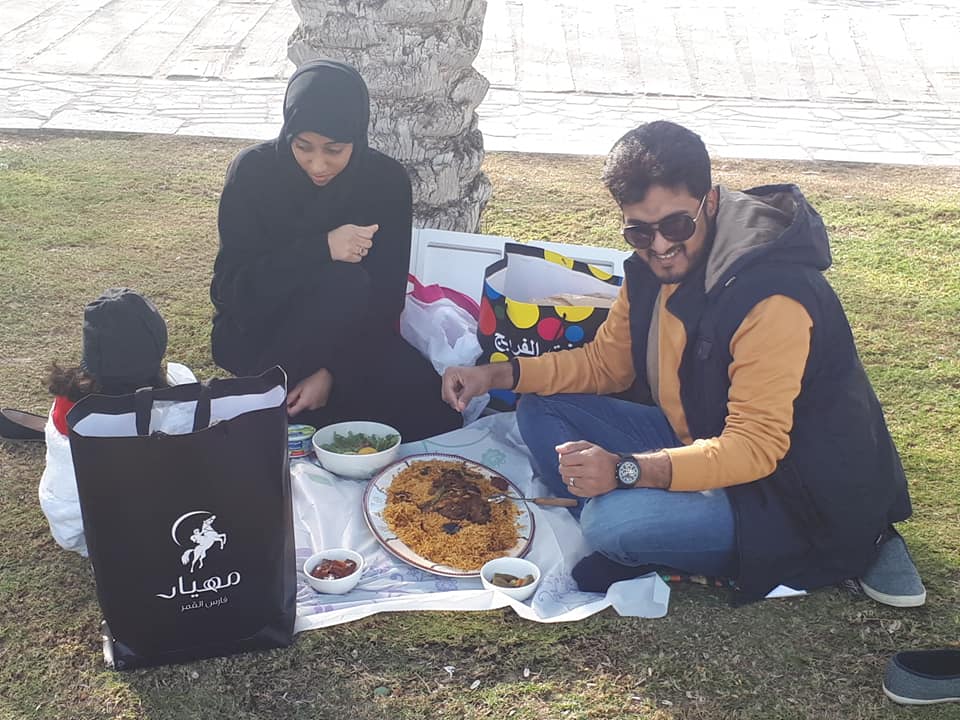 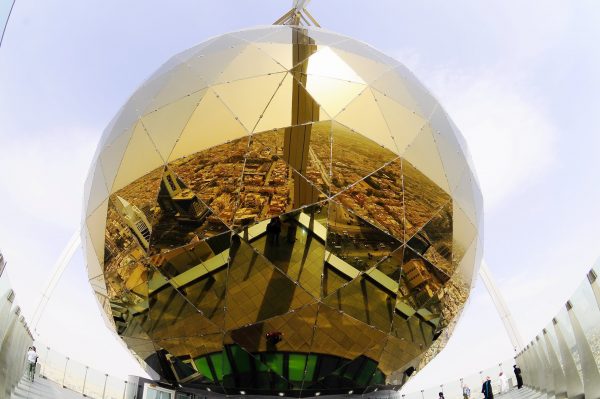 Edge of the World (Jebel Fihrayn) 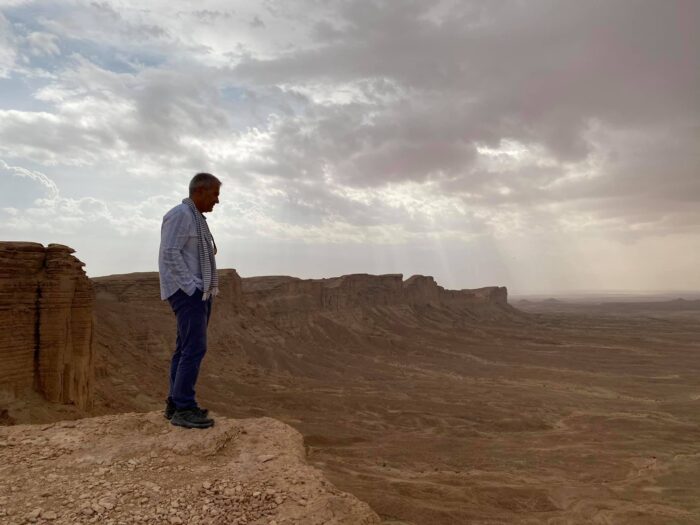 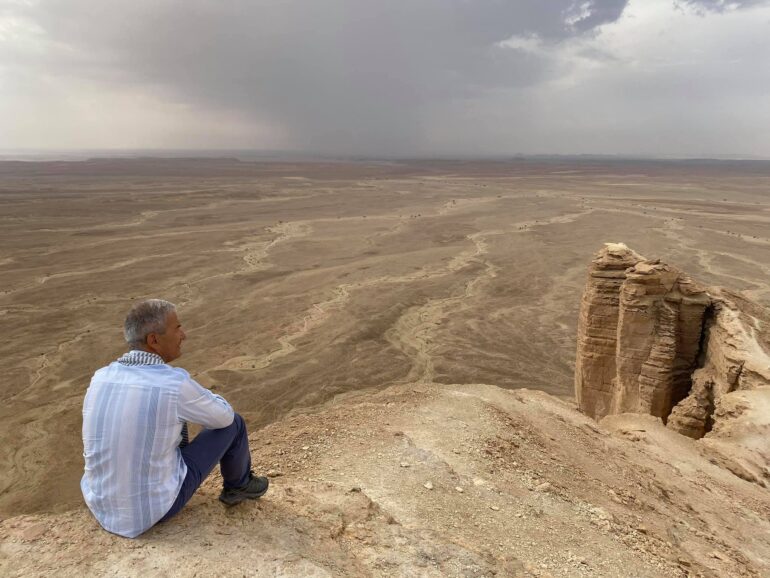 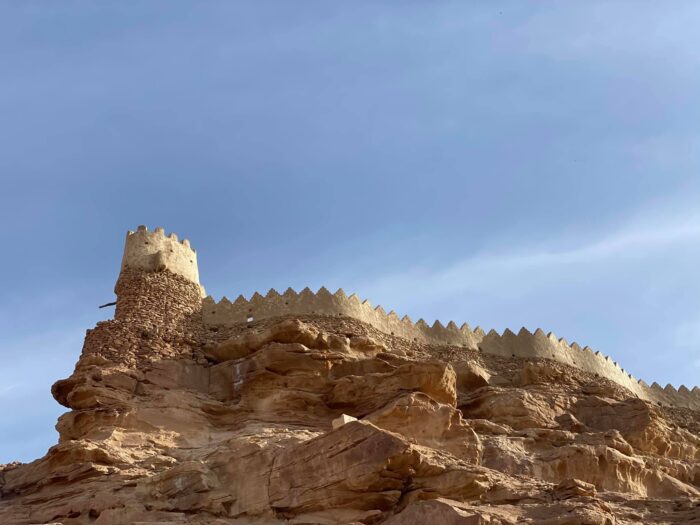 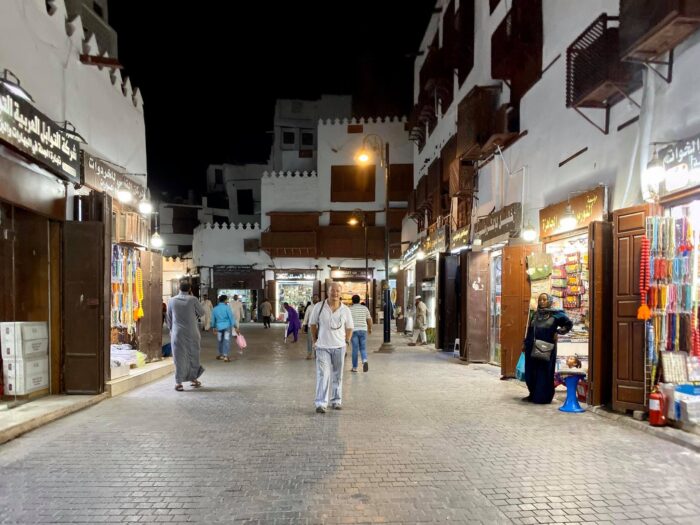 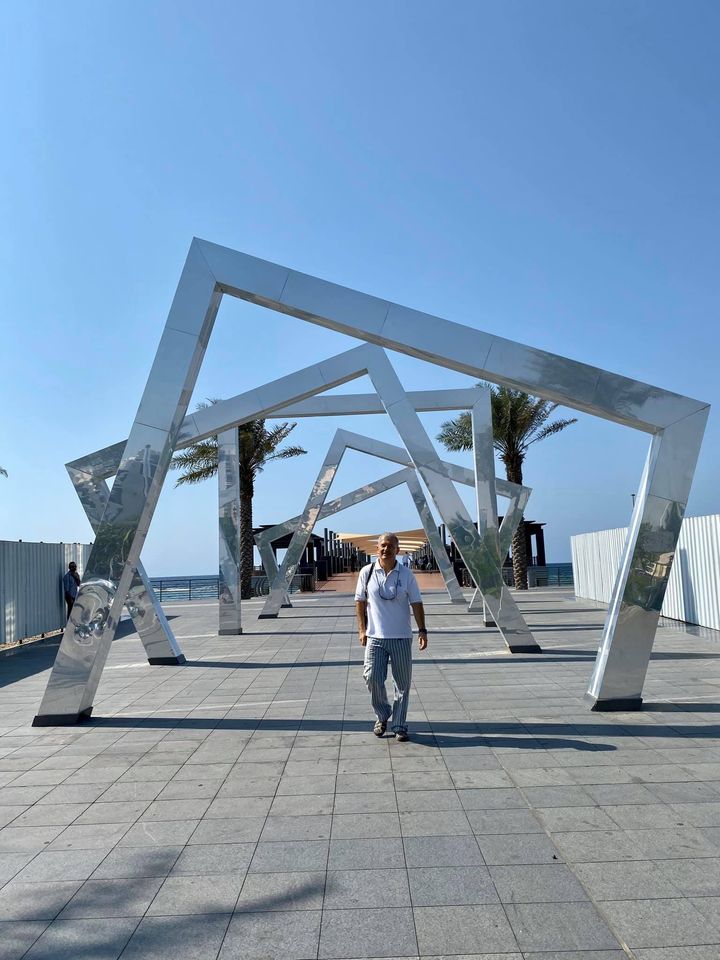 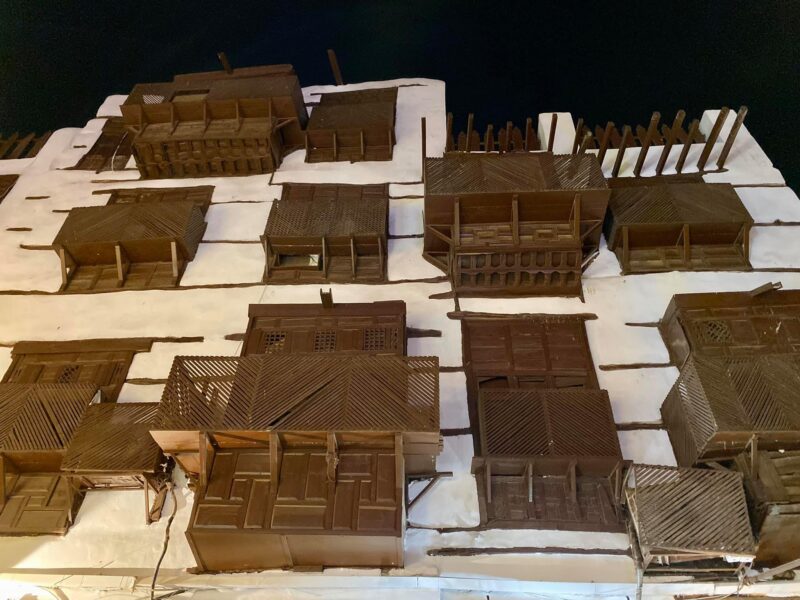 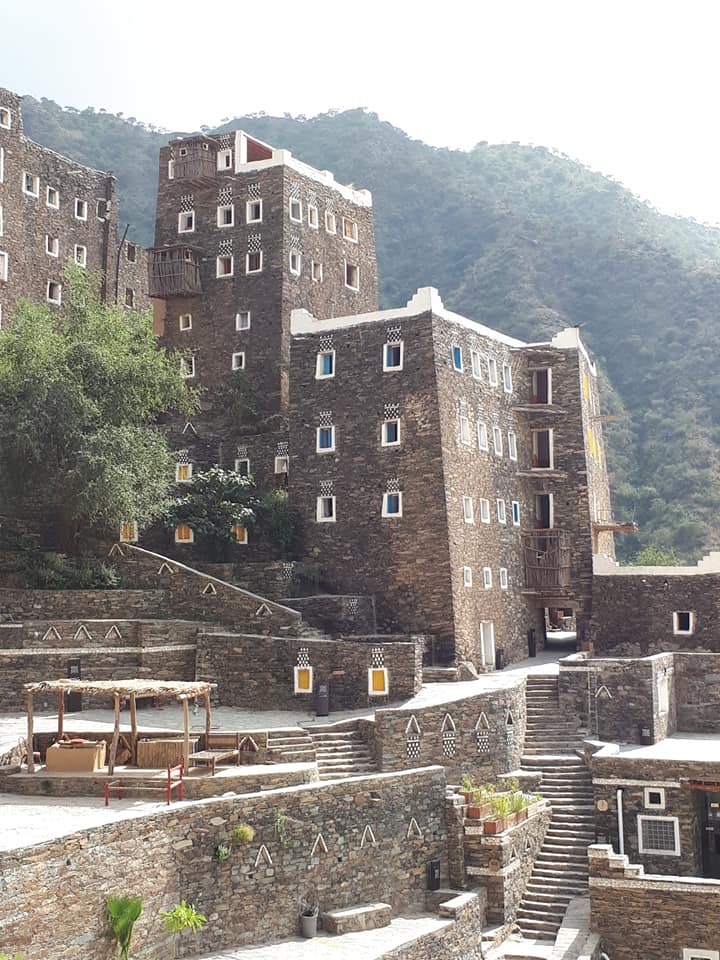 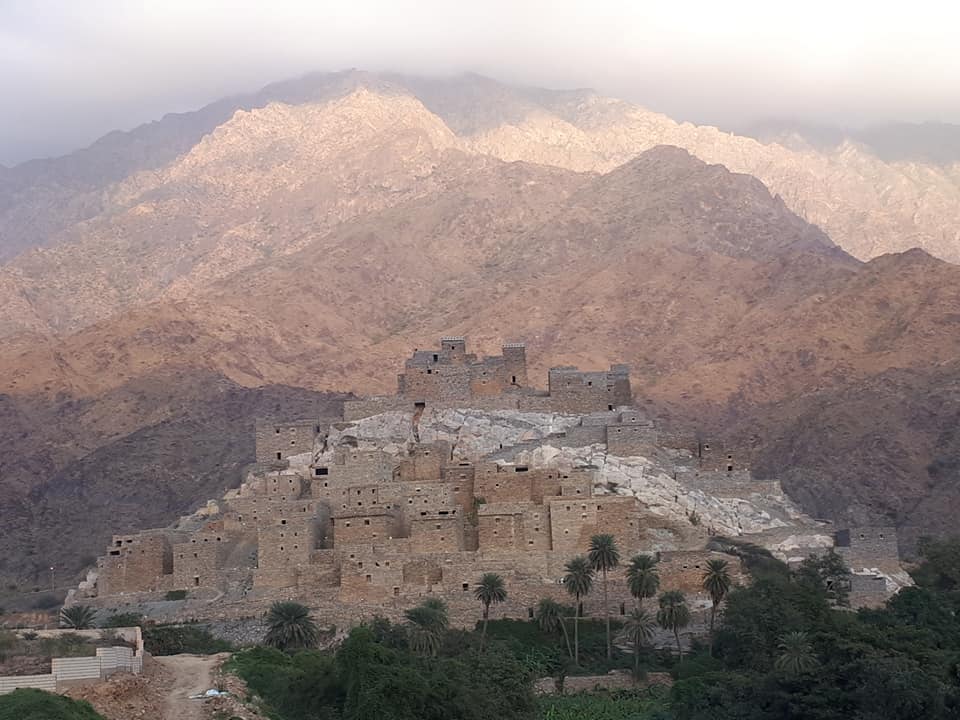 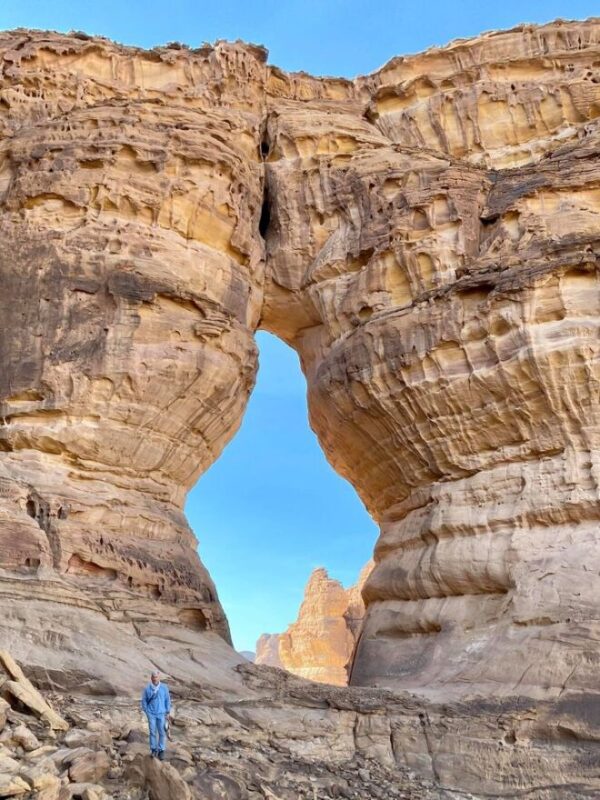 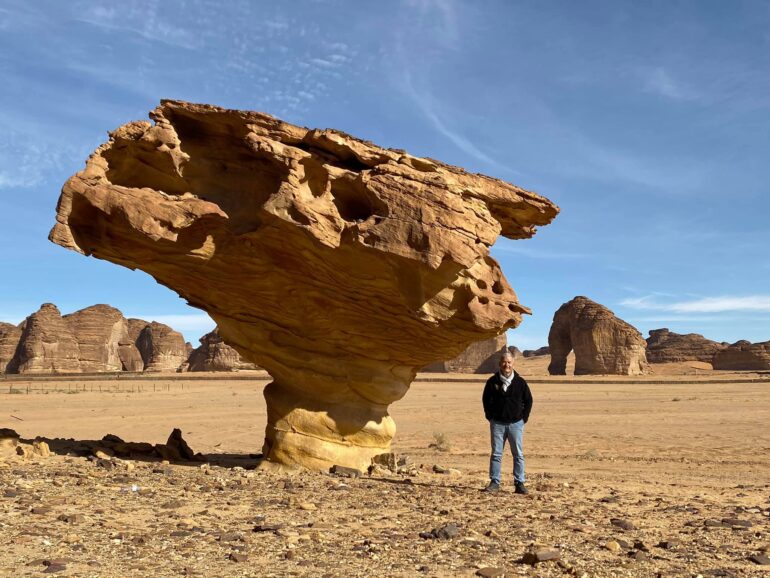 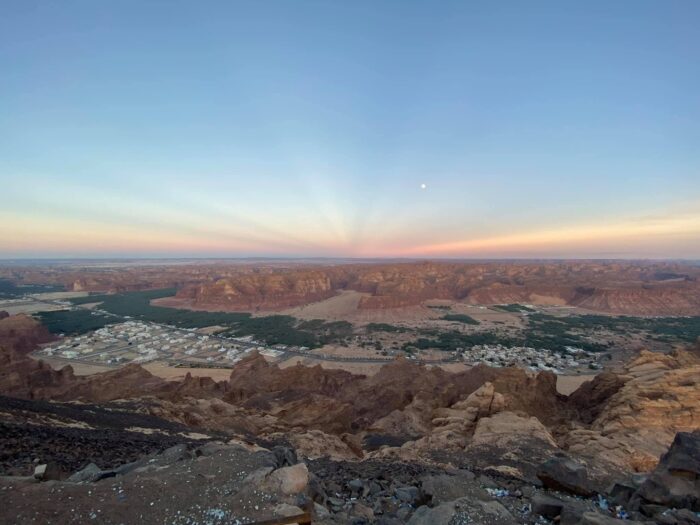 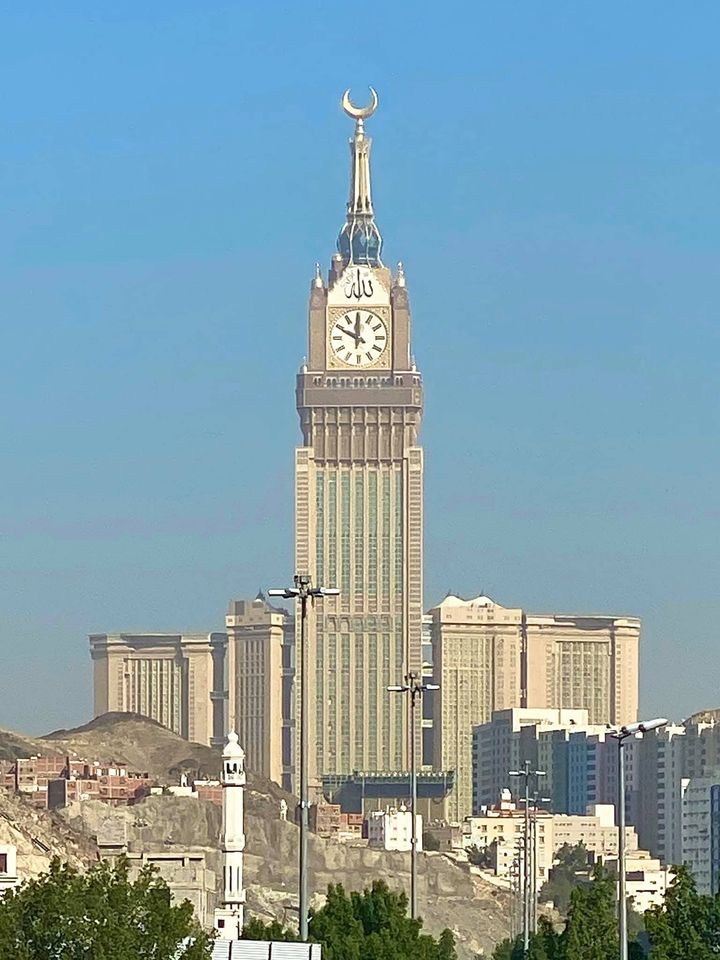 Saudi Arabia - Mecca - Makkah Clock Royal Tower - As an infidel, this photo was only taken from the distant highway - Viktor Ohotin's photo