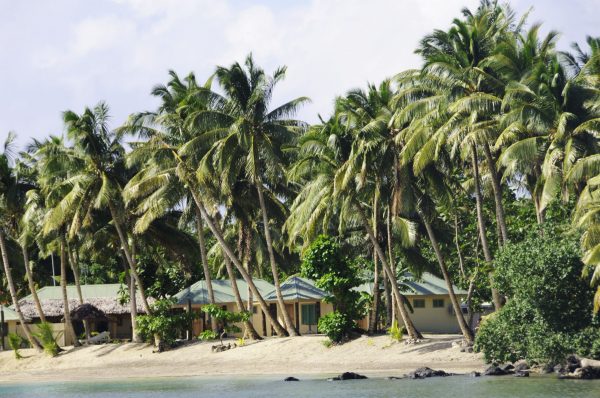 1. Observing the simple countryside life on Opulu, the main island, with its villages, huts, and unassuming, interesting churches

2. Lalomanu, a beautiful, paradisiac beach on the southeastern coast of Opulu

4. The natural friendliness, hospitality, lovely curiosity of the locals

5. A relaxing splash in the water of the To Sua Lagoon (its color is a fantastic green)

6. The mystical view of the rainforest-covered mountains

8. Taking a ferry to cross over to the easily accessible and even more relaxed Savai’i Island

9. The colorful bustle on the Fugalei Market in Apia and the warm welcome we got from the salespeople

1. We were horrified to see all the low-quality, Made-in-China souvenirs in the shops in Apia

2. The sun is quite treacherous – we got painfully sunburnt

3. Struggling with the left-hand driving and the farm animals crossing the roads

4. The ear-splittingly loud music played on the local buses

6. Hotels are overpriced - the price to value ratio is not good.

8. Beaches are not extraordinary. 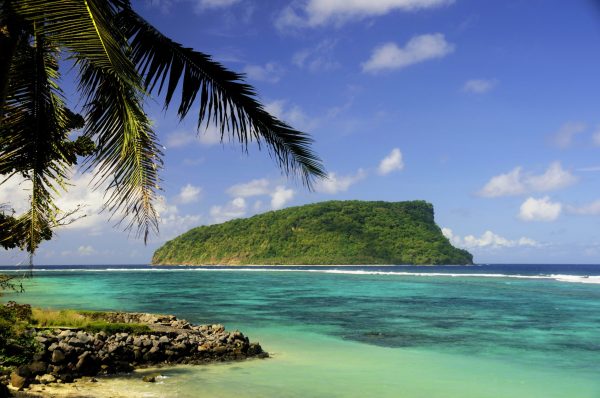 Samoa is undoubtedly not a holiday destination like Fiji is.

The westernized towns of Apia and Pagopago are not authentic Samoa.  If you limit your stay to these cities, your visit will be a waste of time and money.  Discover the villages, immerse in the traditional local milieus. By watching touristy dance shows only, you won't learn much about Samoa." 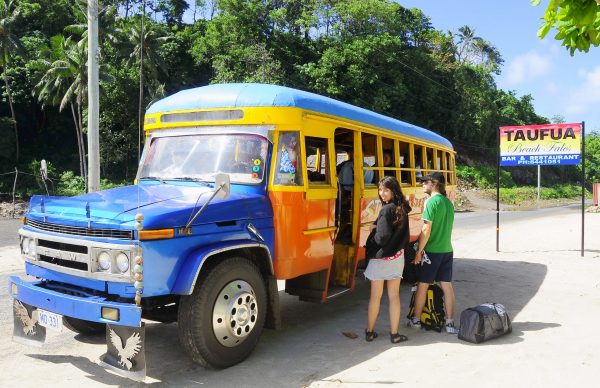 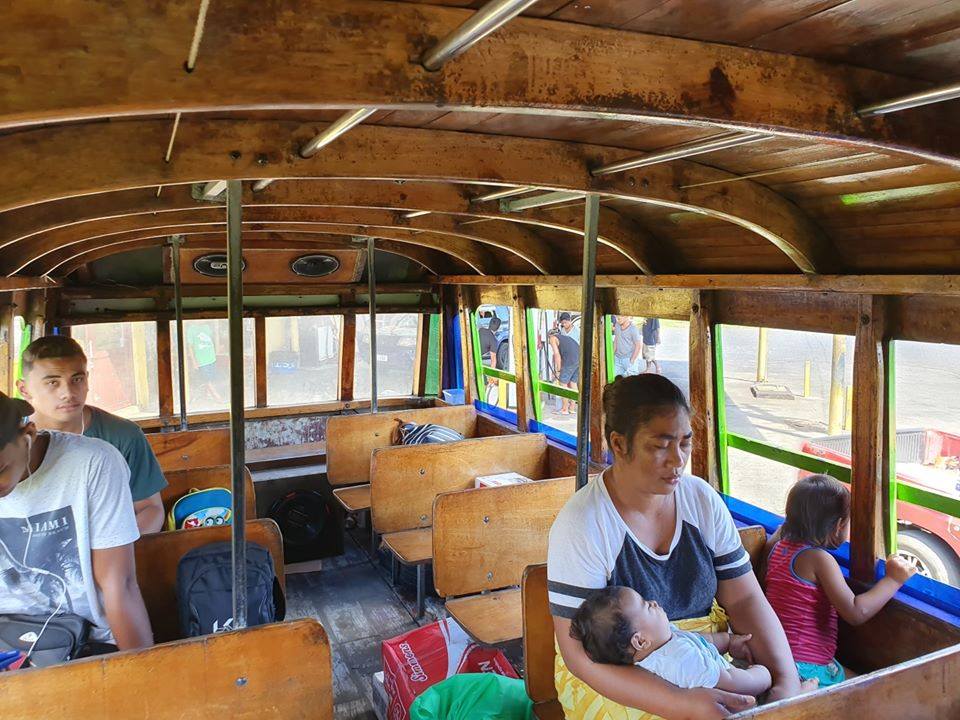 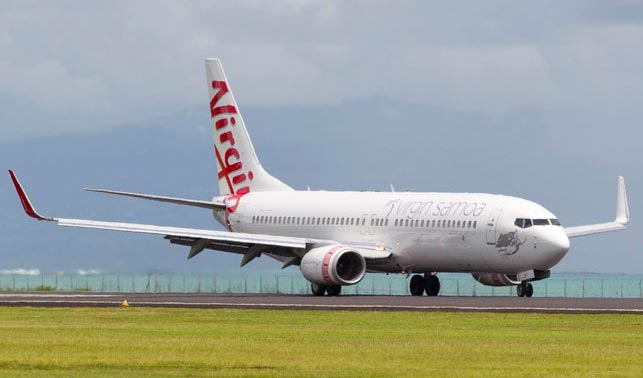 The local food has an unprocessed, natural flavor that can be unexpected for visitors used to the industrially produced meat, fat, sugar, and flour.

Unfortunately, healthy local food is replaced by imported products from New Zealand.  The negative effect is visible on the overweight shape of local people. 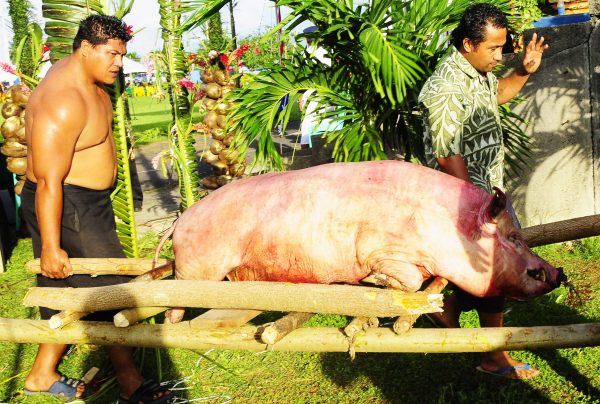 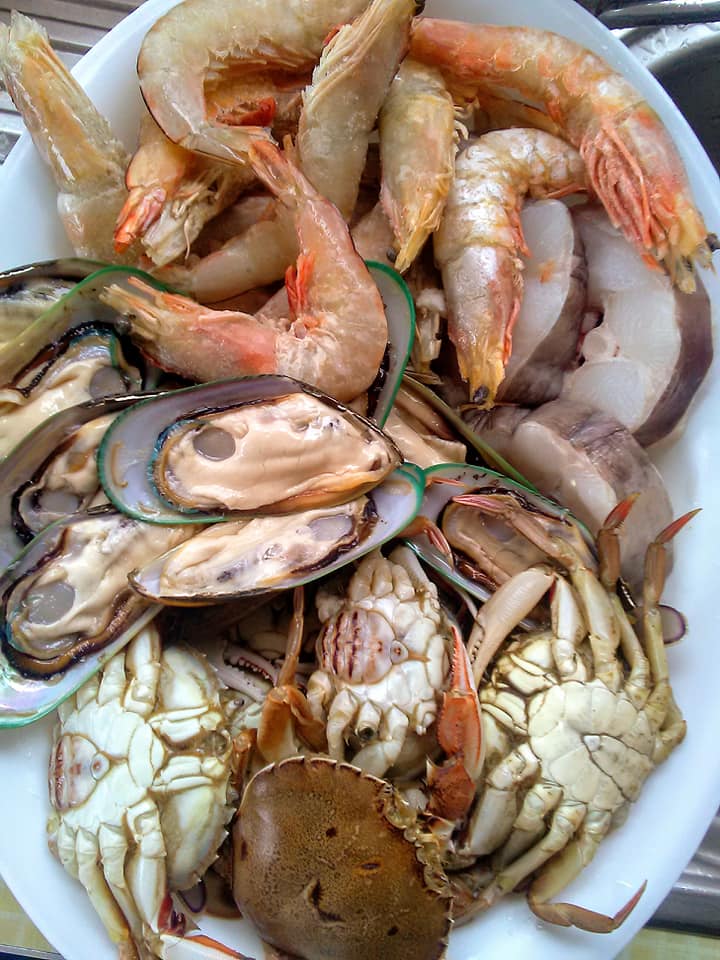 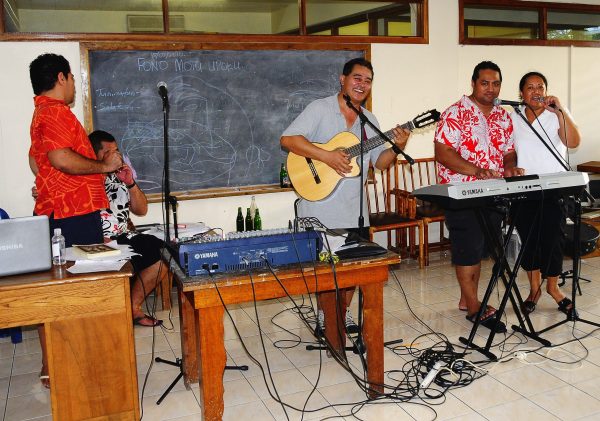 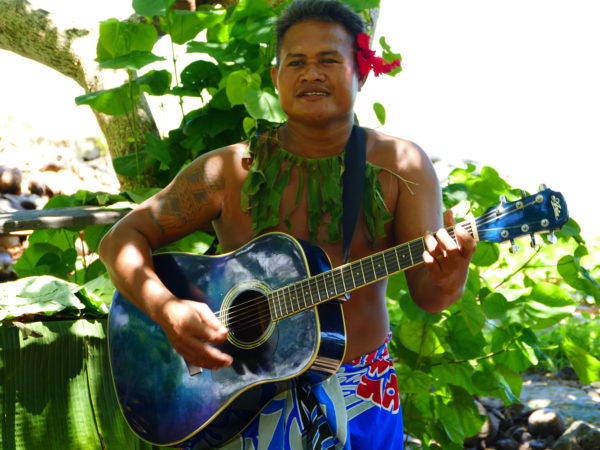 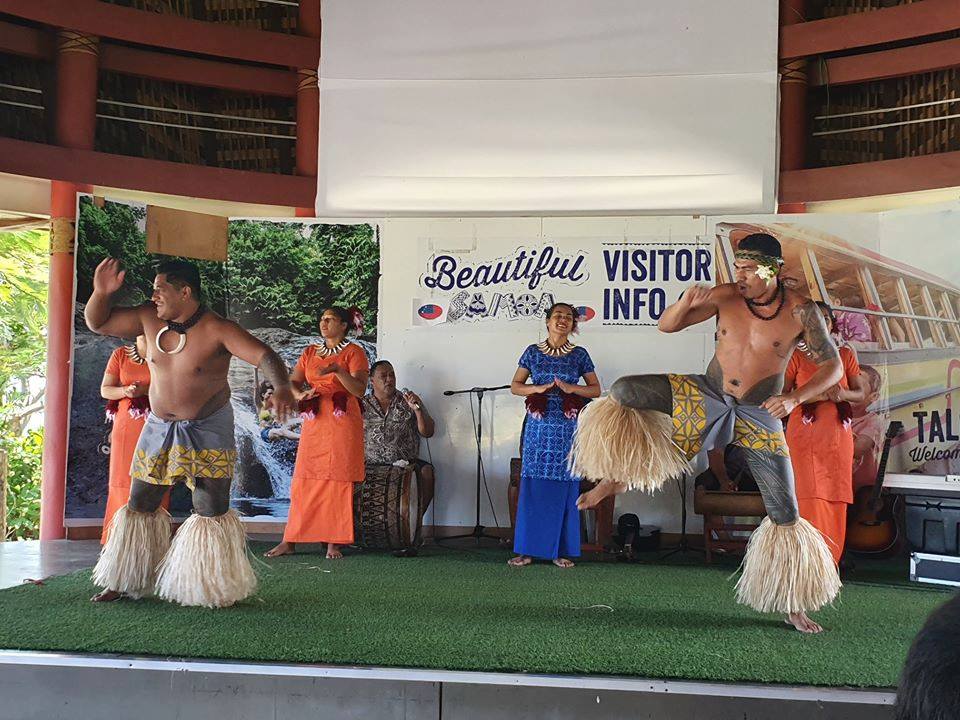 not a bandit, but a performer of a tourist show 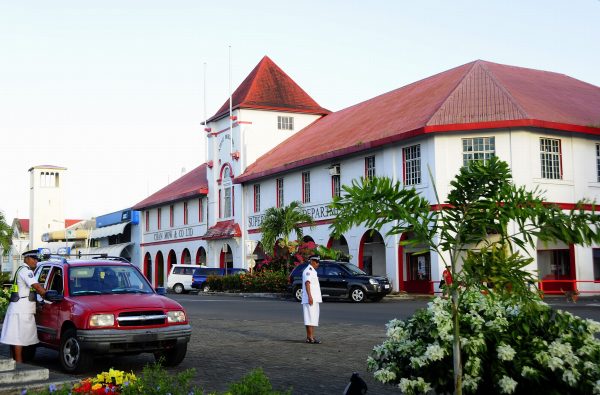 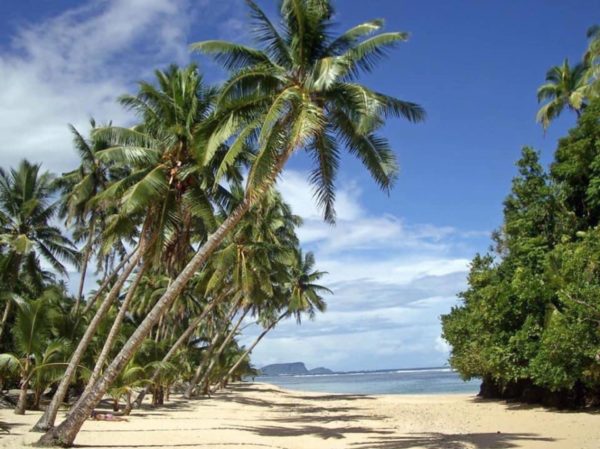 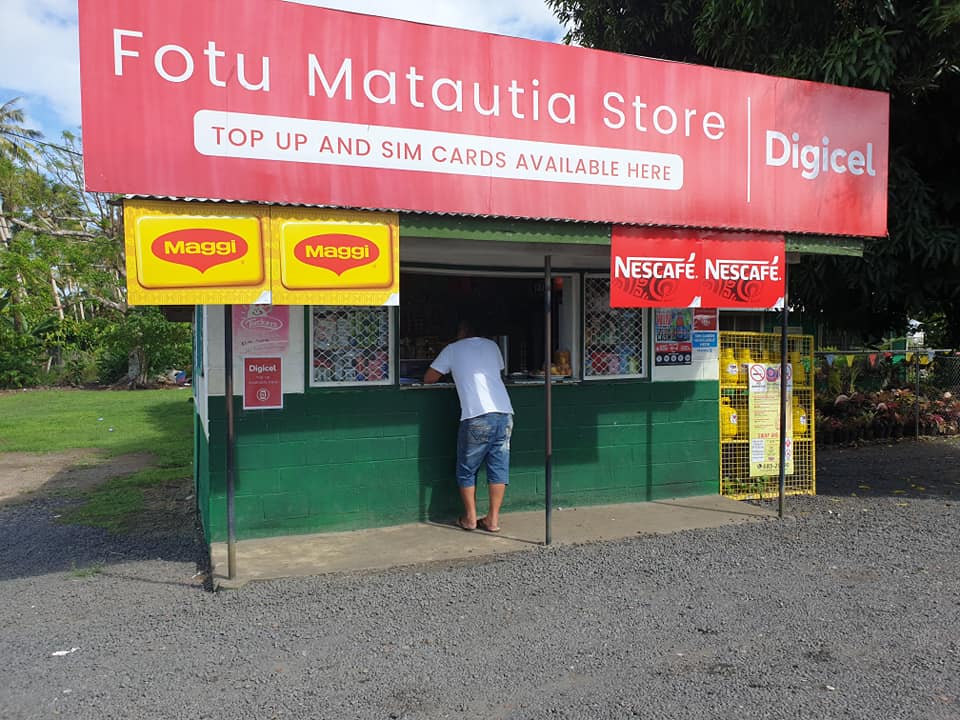 Samoa (formerly Western Samoa) is an independent country in Oceania, in the Polynesian region of the Pacific Ocean, about halfway between Hawaii and New Zealand, northwest of American Samoa.

Languages: the native Samoan and English are the two official languages

Samoa, as Western Samoa, gained independence from New Zealand in 1962.

The standard of living in Samoa is lower the in American Samoa. Samoans don't feel so poor as long as they own some piece of land. Many of them do have some size of plantation. 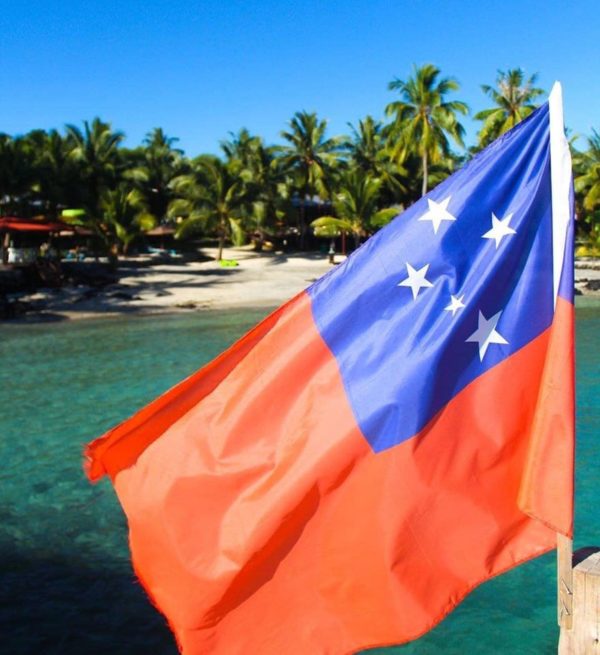 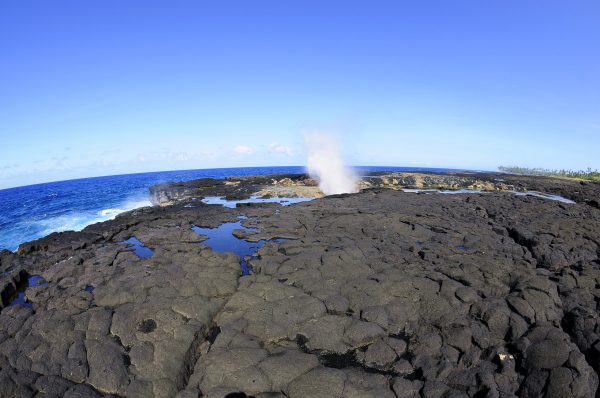 The first Samoans arrived here about 3500 years ago.  Nobody knows from where exactly they left and whether they found these islands incidentally or intentionally.

One thing it may seem sure: they came from the west, from the direction of today's Philippines. In today's Philippines, the so-called Lapita culture of pottery was common, and archeologists have found remnants of precisely such ceramics at the first settlements on Samoa. They must have been brought here because such art of ceramics could not be practiced in Samoa due to a lack of the corresponding raw materials. The totally volcanic islands have no clay to make ceramics.

In recent years, migration research has brought astonishing new findings to light thanks to genetic engineering studies (DNA analyses). All these studies showed that the inhabitants of the entire Pacific region, including the Samoans, descended from the indigenous people of Formosa island (today's Taiwan). Modern linguistical researches support this conclusion.

“The most respected historical figure in Samoa is Robert Louis Stevenson. The world-famous Scottish novelist, suffering from ill health, moved to Samoa in 1890 on medical advice. Bloody battles were then being fought between the European powers for possession of the islands, but he chose to side with the Samoans.

At that time, the Palangis (white people) were beings who were believed to have come from heaven because an old legend foretold the coming of special people and the new god they brought. That’s why white aliens were so successful among the indigenous people at the time. They were all a novelty to the Samoans, and one of these Palangis was R. L. Stevenson. He visited the country, got to know it, then fell in love with the inhabitants whom he was greatly influenced by. For that reason, he has always been regarded as a highly esteemed person.” 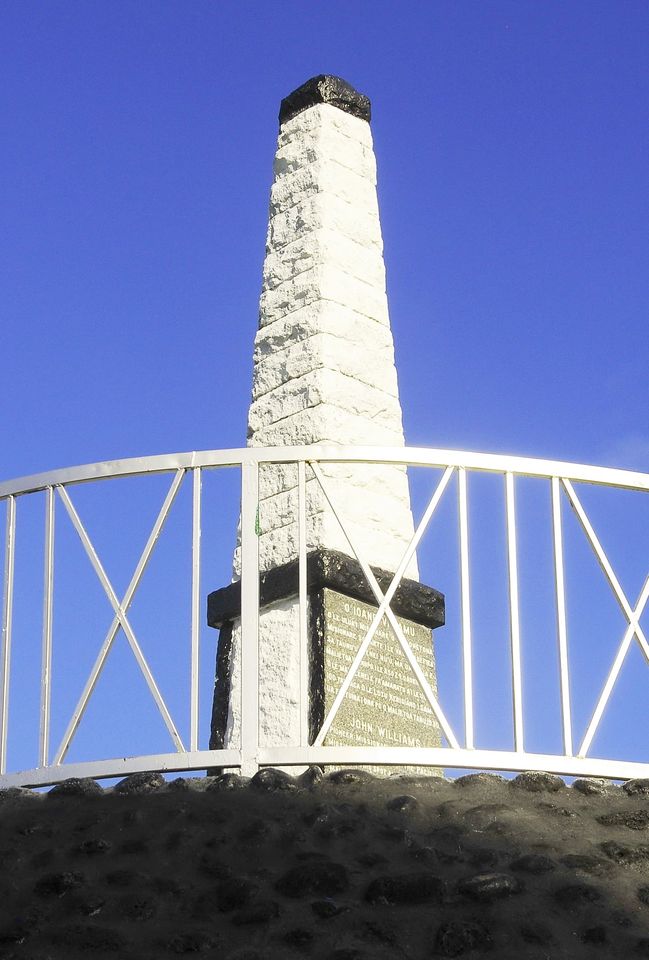 Western Samoa - Apia - the monument of John Williams, an early missionary who was killed and eaten in 1839 while evangelizing in Vanuatu - Elter photo

The villages are much more impoverished than the cities. Still, the social and family solidarity helps villagers live decently, as long as cyclons and natural disasters are not destroying much of what they have.

The main export is taro, cocoa, and coconut products. Tourism is also vital for the economy.

All Samoans live in their extended, multigenerational family.  No one is left alone. No one lives alone in a house or a flat.

The strong community ties give stability, a specific identity for each individual. Each person has a well-defined position in the hierarchy of the community. There is little space left for individualism, egoism.

Western-type consumption has powerfully penetrated, but the Samoans managed to protect their traditional cultural values and civilization. They selectively absorbed foreign influences.

More than three-quarters of the population still live in the countryside, in the villages of both main islands. All villages have electricity, water supply, and at least one small convenience store.

More than half of the population is under 20 years of age. Only 6% are of retirement age, over 65 years old. The population growth is staggering - more than 2.5%/ year. Contraception and birth control are not widely used, despite intensive official propaganda. Five to six children are still the average for a woman, and the infant mortality rate is relatively low.

Kids over 5-6 years of age have to participate in the tasks of the household. Over 14, children get more serious tasks within the division of domestic labor.

In the village communities, each adult has a rigorously defined position, status.

“Samoans of both sexes pay a lot of attention to the purity of the body. In this regard, they could compete with any cleanliness-obsessed European. The chivalrous Samoan man allows the woman (his wife) to do only the easier housework, thus preserving her physical integrity. However, by winning the heart and grace of his wife, he has not yet won final rights over her. The offended, sleepy, tired diva (wife) needs to enjoy an endless string of conquests.
Compared to the number of adults in Samoa, there are a striking number of children. Half of the population is under 15 years old. Young people need to learn the main guidelines of Samoan life at an early age, for instance, to respect to the rules made among the ainga (the extended family), the matai (the bosses of these families), the pules (the leaders of each settlement), or indeed the wider community.

The inhabitants of Samoa are very religious. Half of the population is Congregationalist, a quarter Catholic, 12% Methodist, the rest are mostly Mormons, and Upolun even has believers in the unique Bahai religion.

Despite the inroads of the churches, many Samoans still secretly keep records of their aitui (totem), which can be a fish, a bird, or any other animal revered as a saint. The beginnings of a temple ceremony or evening devotion, called the Sa, are announced in Samoa with gong beats. The stranger (Palangi), if he then gets lost in a settlement, must stop and wait for the end of the daily prayer with a quiet setting, the end of which is also signaled by gong beats. One of their customs is to wear the most beautiful lavalava (a scarf worn by both sexes) for masses or ceremonies, which is returned to the place of honor in the family cloakroom at the end of the ceremony. 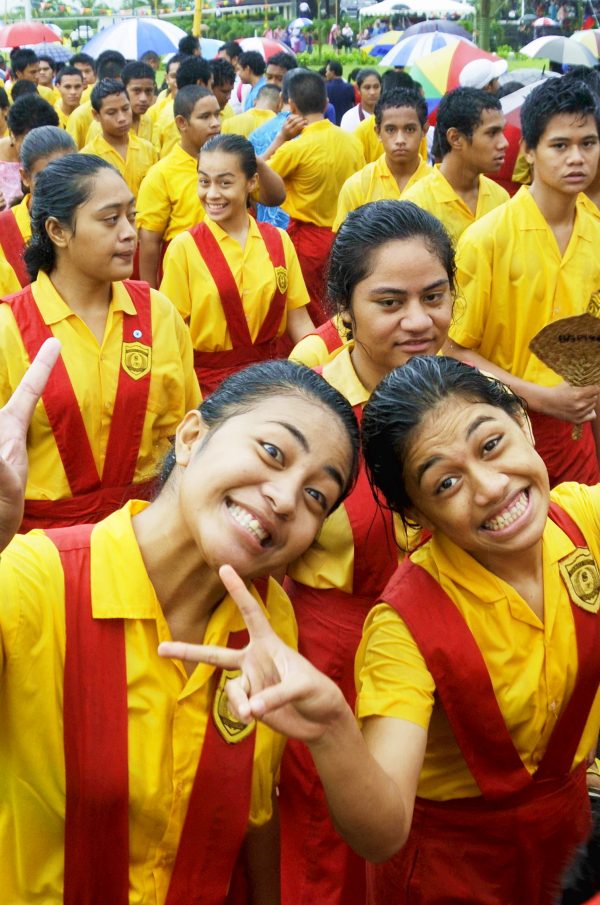 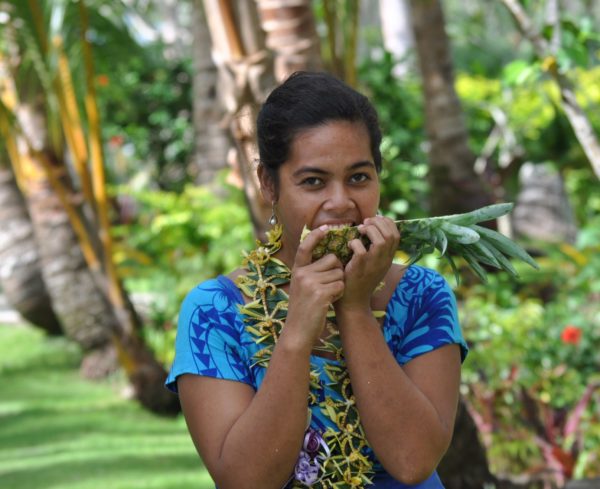 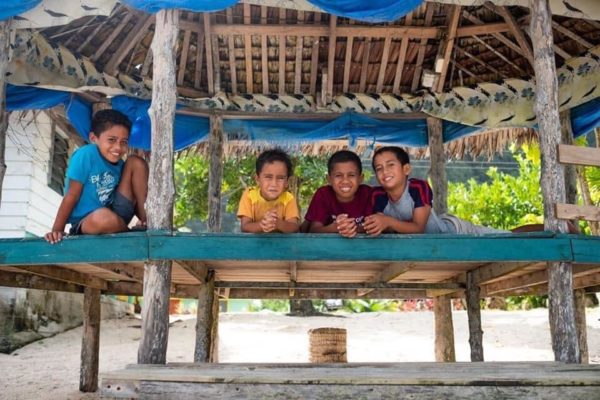 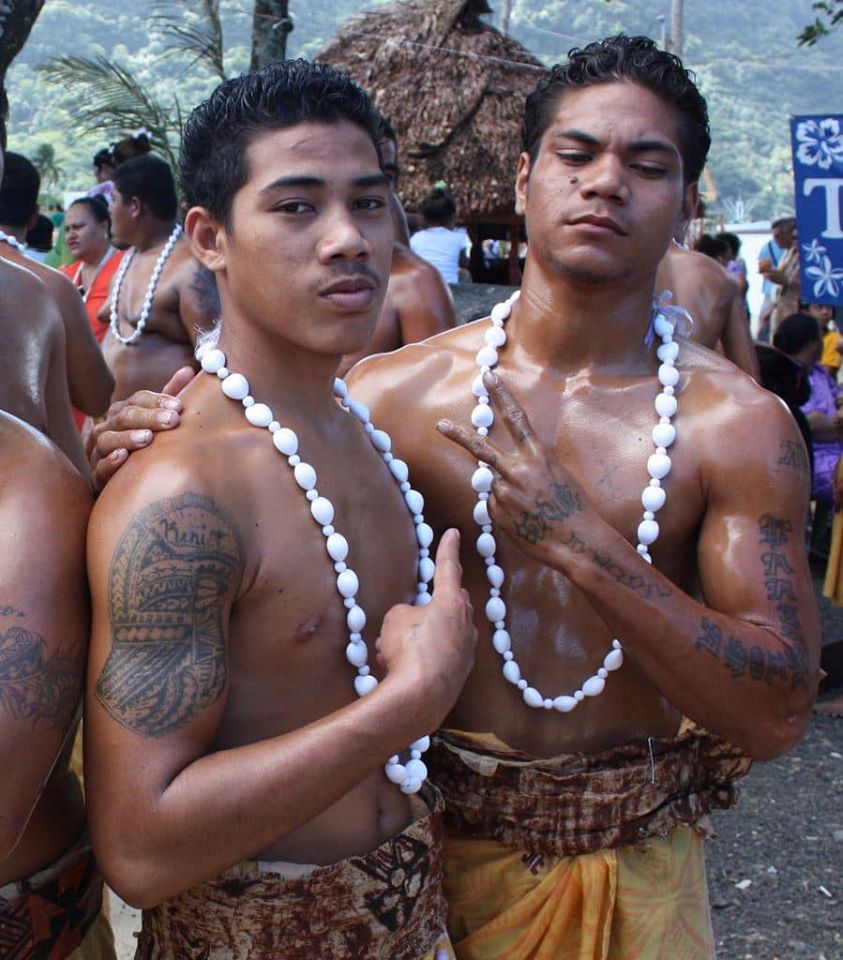 1. Slow down, don't rush.  Do as the locals do, that is, walk at a leisurely pace.  Don't be upset about unhurried services.

3. The people of Samoa like to joke, laugh almost all the time. They have their own peculiar, scathing sense of humor. Enjoy that, and don’t try to compete with them with your home-style humor because they may not appreciate it.

4. Samoans are profoundly religious and strictly expect foreign visitors to respect the quiet during the church services.  Do not make anything noisy because local civil authorities may react aggressively. Do not disturb the prayers; behave in a low key.

5. Do not display an arrogant attitude; do not picture yourself as a superior person to the locals. Don’t expect the locals to be humble to you only because you are a foreign tourist. Samoans are proud people.

The traditional range of food in Samoa was always very limited in variety (not in quantity).  Four fruits have clear dominance: breadfruit, plantains, taro, and tamu.
There is no grain or rice in Samoa, but the four fruits mentioned above are highly nutritious, much more than potatoes. So locals feed themselves well; breadfruit is exceptionally high in vitamins and minerals.

So, no potatoes, no grain, no flour, no bread and cakes, no milk, no cheese. Instead, breadfruit, plantains, Tamu, taro, and coconut cream, some are labor-intensive foodstuffs.  Strenuous work is needed; that's why cooking in Samoa was traditionally the men's job. 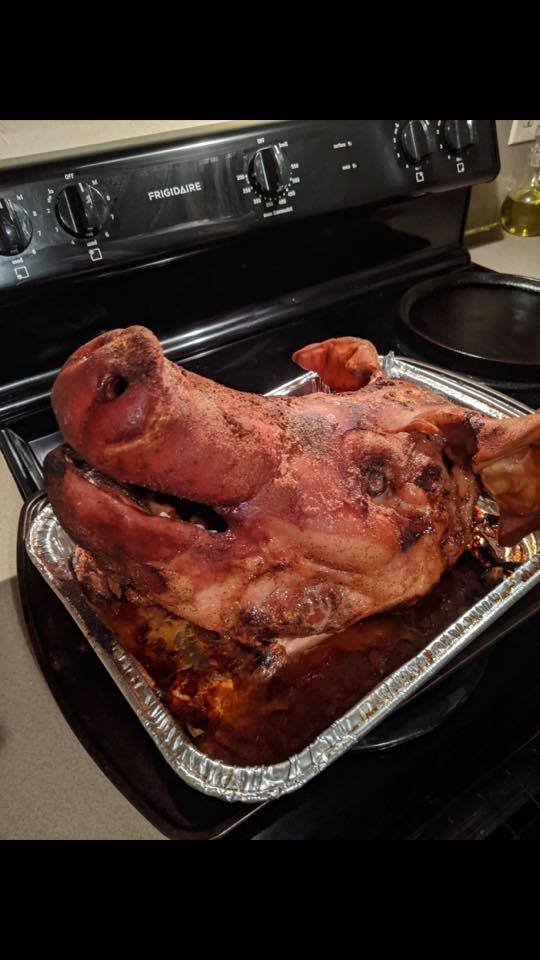 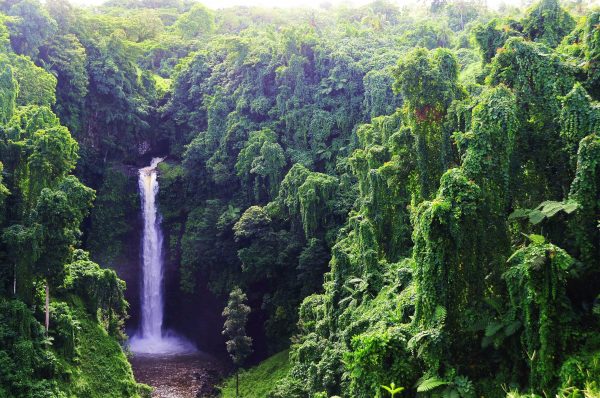 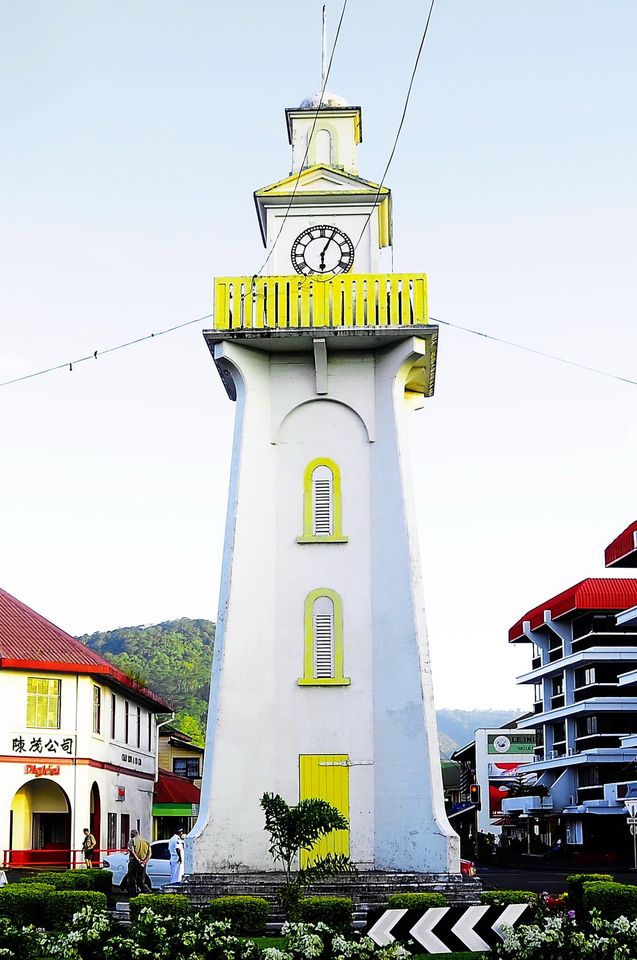 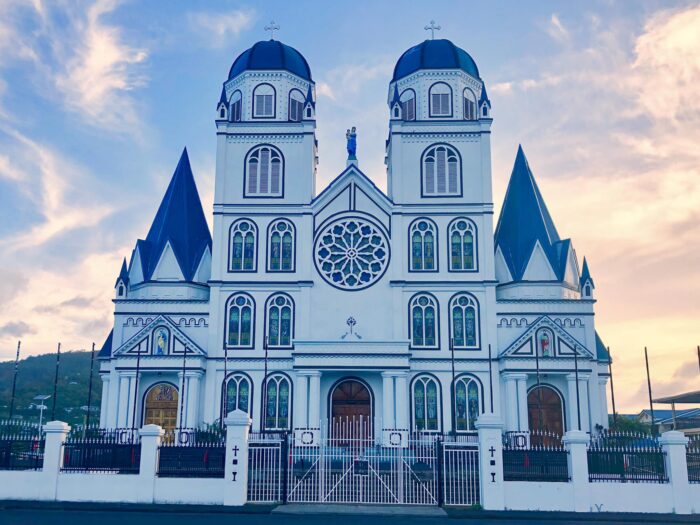 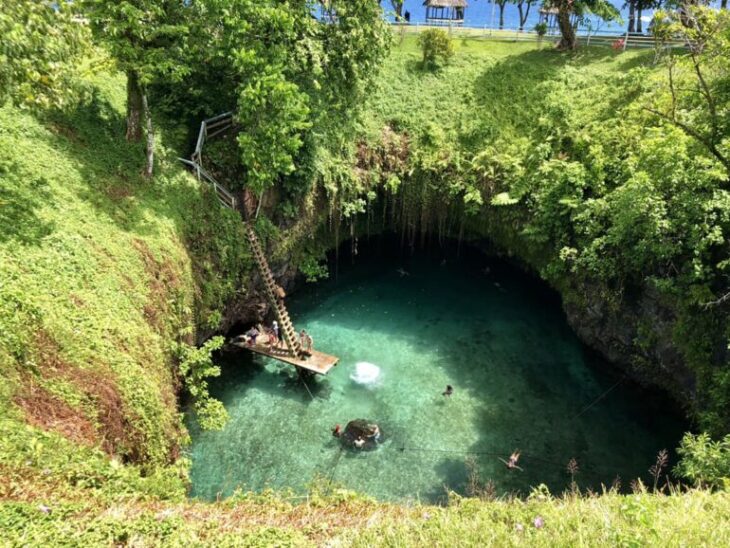