1. Interesting and revealing to see the marked differences between the two parts of Kosovo, the one where the Albans live, and the other were the Serbs

2. Though Mitrovica is ugly but at least not dangerous

3. Both the Albanians and the Serbs were hospitable to us when it cleared up that we are tourists, they were flexible in helping us, and that selflessly

4.The inner core of Pristina is developing visible fast.

5. The passport control in the airport was surprisingly smooth and fast

6. Kosovo has spectacular mountains and gorges

7. Worth to visit these two smaller cities: Prizren and Peja, where the Oriental character of the architecture is preserved, not globalized as Pristina

8. The Ottoman monuments are well-restored, financed by Turkey

1. Erratic water supply and heating defects in our hotel

2.Excessive pledging of the allegiance to the West, the US, and European Union - a statue of Bill Clinton, avenues named after Bush and Clinton, European Union flags (Kosovo is not its member), etc.

3. The level of hatred between the Albanians and the Serbs - when will that be over?

4. The systematic destruction of the Serbian cultural and sacral heritage is a disgusting shame (and I am not telling that from a pro-Serbian stand)

5. A lot of half-ruined buildings right next to brand new ones

7. Some Kosovaran children got the first names like Bill Clinton, Tony Blair

8. The Bill Clinton statue has absurd long arms (had a long arm to help Kosovo to exist)

9. Some locals used various tricks to squeeze money out of us, and that made us upset after a while

10. Permanent, stressful pressure to bargain for almost everything

“Spectacular nature, friendly people, good food, and low prices. The standard currency is the euro, which makes lots of things much easier. It’s worth bringing plenty of change since a coffee (which is very good) or a soft drink will only set you back between €0.50 and €1.

Many people asked us whether we’d felt nervous about visiting Kosovo, but it felt completely safe. People generally speak quite good English, and even if they don’t, they do their best to help.

There is Wi-Fi in restaurants and cafés (and even hairdressers), but there were a few things we didn’t like. One was the amount of litter – the river was full of plastic bags and glass bottles. There’s work to be done in this regard. And the smoking… I’ve gotten used to smoking being prohibited in restaurants, but in Kosovo, you could cut the cigarette smoke with a knife in many places. These are just two negative points, though, so I’d definitely recommend Kosovo.” (2019)

“From a tourism point of view, you could see everything worth seeing in Pristina in a couple of hours. The real interest starts outside the capital. The frescos in the Serbian Orthodox monastery of Gracanica are absolutely worth seeing – don’t skip them! We heard there’s another Serbian monastery that’s even more beautiful. It’s also worth visiting the city of Prizren, which is interesting both for its partly Turkish population and its Ottoman-era architecture.
There are mountains, rivers, a fortress (the site of the famous Battle of Kosovo in 1389), caves, and hiking trails.

Kosovo deserves at least three days, and five would be needed to get a decent overview.
Incidentally, we were surprised by the number of tourists – though not in large groups – we met Western Europeans, Turks, Israelis, and Asian tourists as well. Locals are friendly and helpful towards tourists. Many can speak English, German, and French. (b.d., 2019) 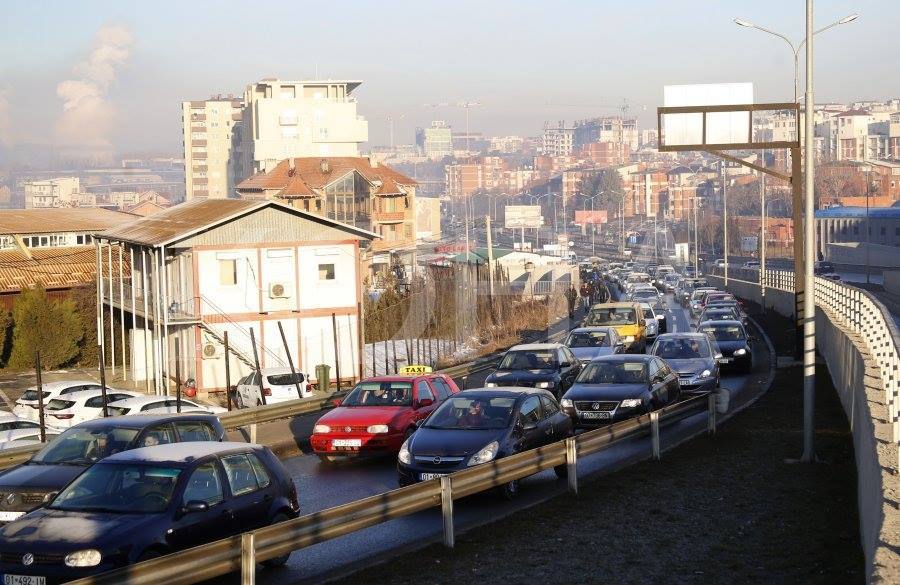 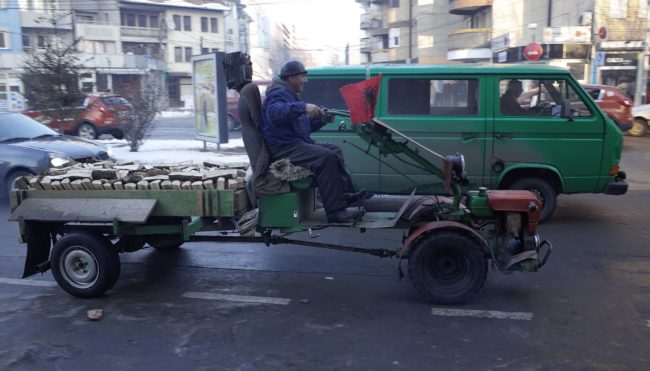 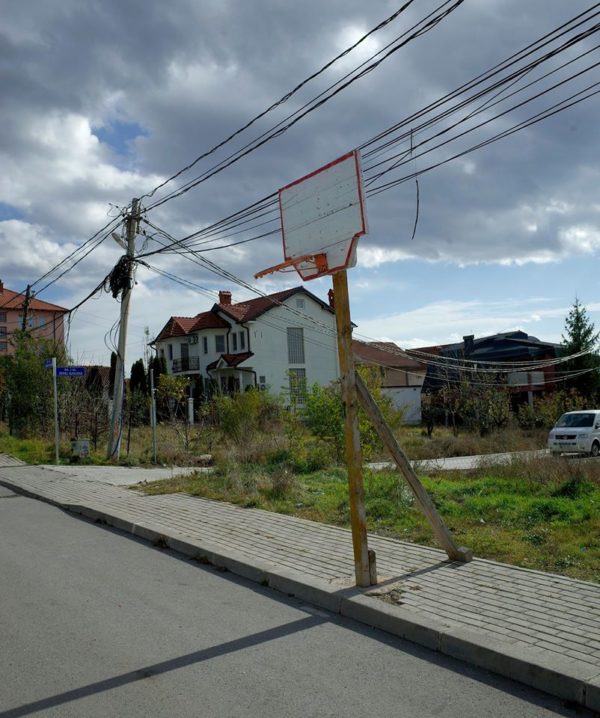 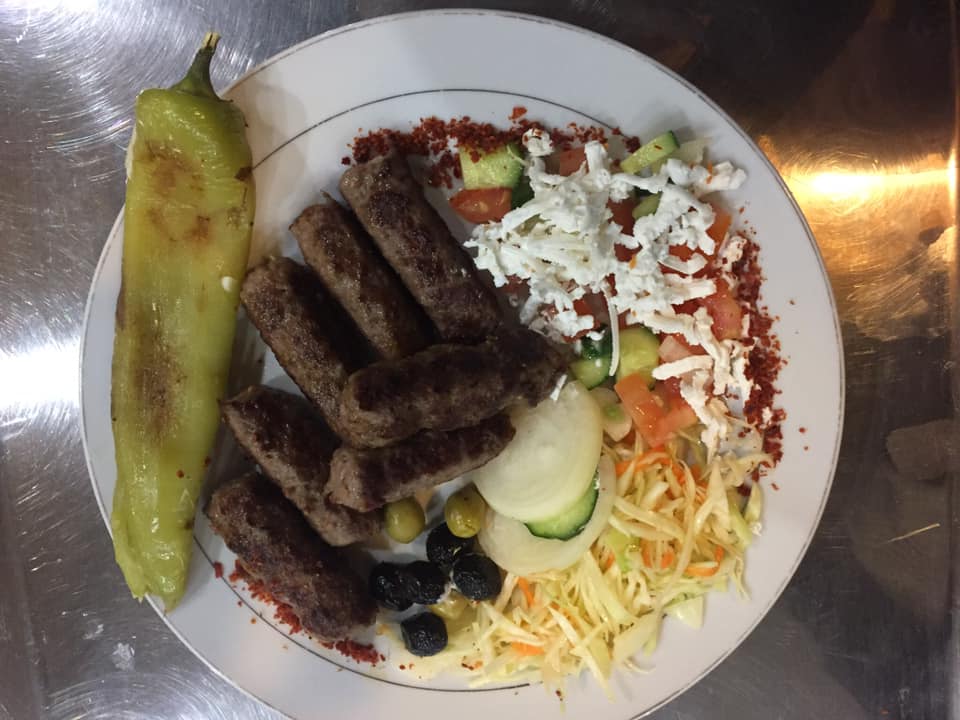 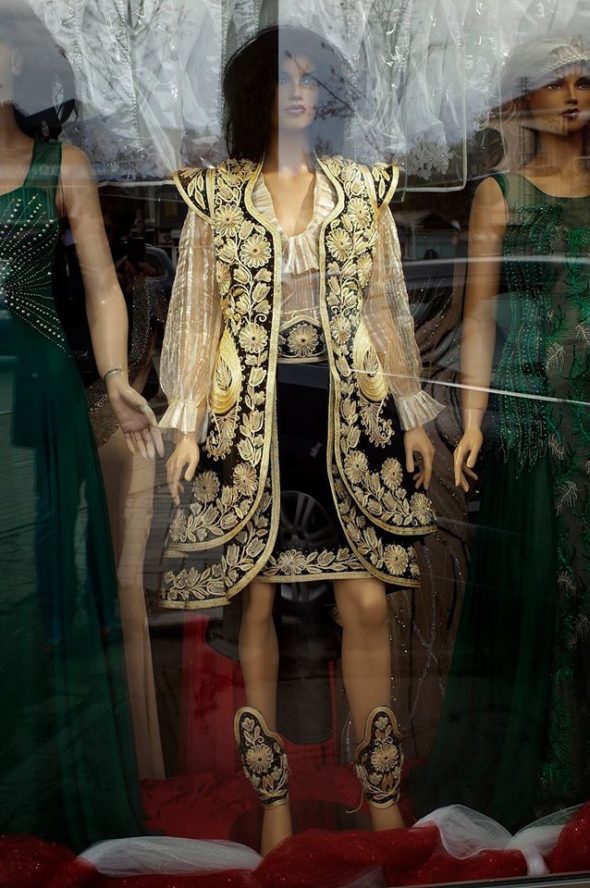 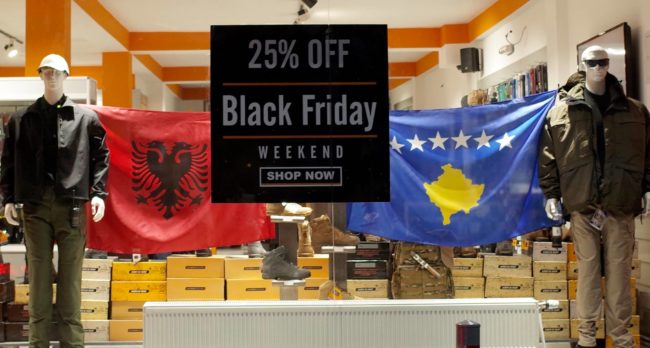 Kosovo - Black Friday in Pristina with the Albanian and the Kosovar flag - e.v. photo 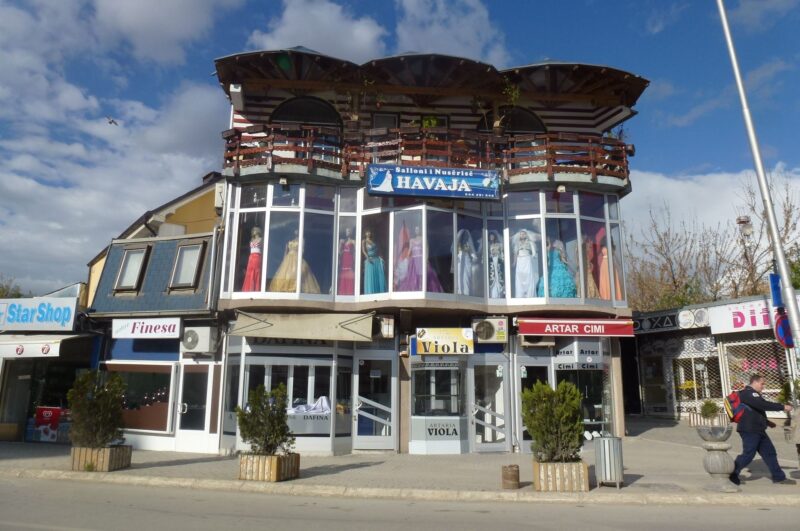 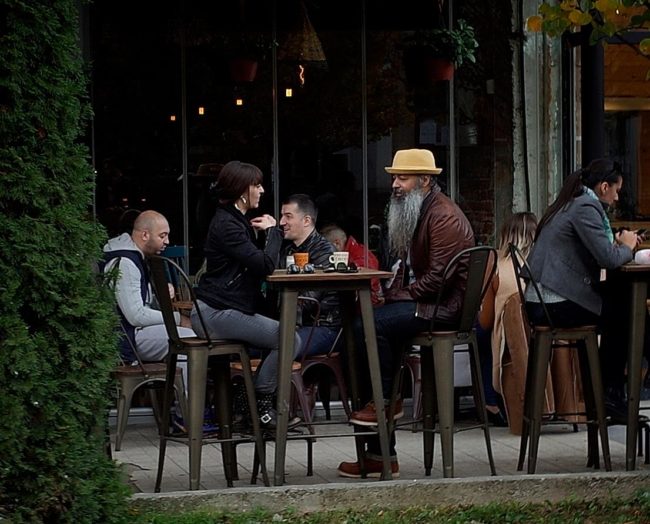 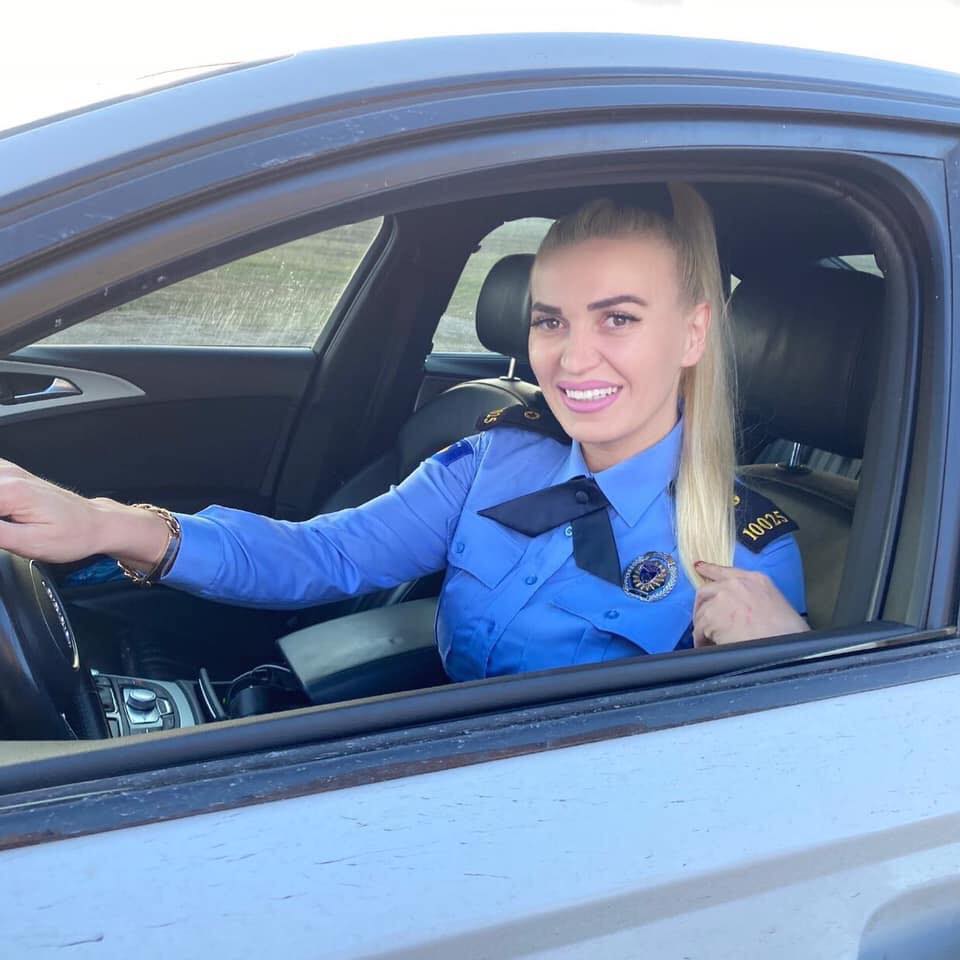 In Pristina, the air is often polluted, especially during the winter heating season.

We do not recommend drinking tap water. 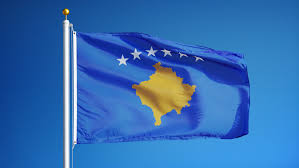 Kosovo - national flag - flamuri kombëtar kosovë - The flag is unusual by using a map as a design element; the flag of Cyprus is the only other like that 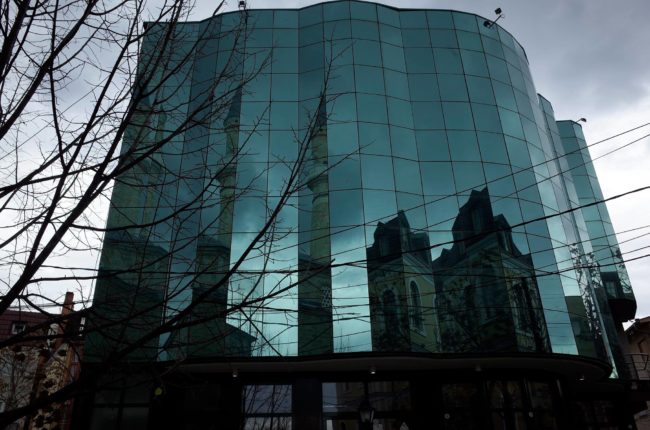 Kosovo is a self-declared independent, Western Balkan country. Since 1999, Kosovo has been under the supervision of a special United Nations body for matters of law and order, and NATO for peacekeeping. The UN and NATO are present to this day, but the main supervisory role shifted to the European Union in 2008. The UN and some EU member states recognize Kosovo as an independent country, unlike Russia, Serbia, and many other countries in the world. Serbia insists that Kosovo is part of its territory but may give up this position if it wishes to become a member of the European Union (which it does).

As a consequence, Kosovo has a disputed border with Serbia (north and east). Its other neighbors are Macedonia (south), Albania (southwest), Montenegro (west). Kosovo is a landlocked country.

Population (in 2020): 1,8 million – 92% ethnic Albanians (Kosovars), 5% ethnic Serbs (who live in a quasi-state in northern Kosovo, and in other, mostly Serbian populated small enclaves, and reject Kosovo’s authority). Many Kosovars live and work in Western Europe (mostly in Germany, Italy and Switzerland), the rest are minorities, like Gorani, Bosnians, Turks and Roma groups of various names .

The relation between Albanians and Serbs in Kosovo is full of mutual distrust (if not hate). Caught in the middle of the Balkans’ strife, the Roma (Gypsies) of Kosovo (about 2% of the population) have the absurd privilege of being “the most unwanted” in this land of ethnic hatred.

Official languages: Albanian and Serbian – Albanians in Kosovo speak a dialect of the Albanian spoken in Albania

Religion: Kosovo Albanians are Sunni Muslim – There are some also Slavic-speaking Muslims.

Official currency: Euro (although Kosovo is not part of the eurozone)

Public safety is good for visitors.

Kosovo is not an established tourist destination, but has some attractions, like the Gracanica Monastery, the cities of Prizren and Peja, and some beautiful mountains and gorges in the south and east.

Kosovo is one of Europe’s cheapest countries.

Summers are hot and dry, winters are rainy and cold. 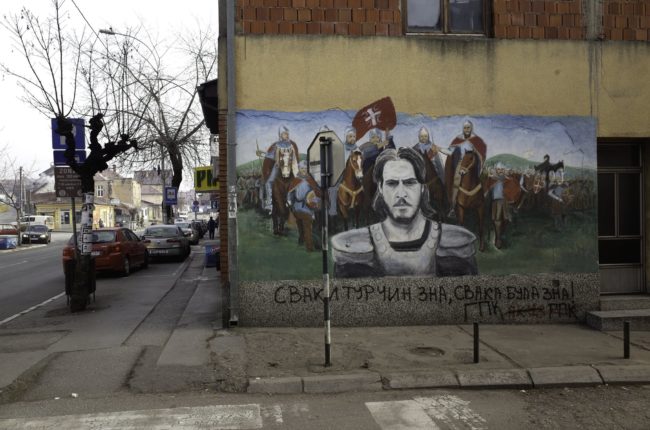 Kosovo - history-related graffiti - The quote on the wall is a reference to the 1389 battle of Kosovo where Turkish sultan Murat was killed. The tune is being sung also by Serbian soccer fans Grobari (Gravediggers) on matches with Turkish teams. And yes the quote means "All Turks and all Turkish women know... that Obilic, the son of a Serb has killed Sultan Murat." - e.v. photo e.v. photo 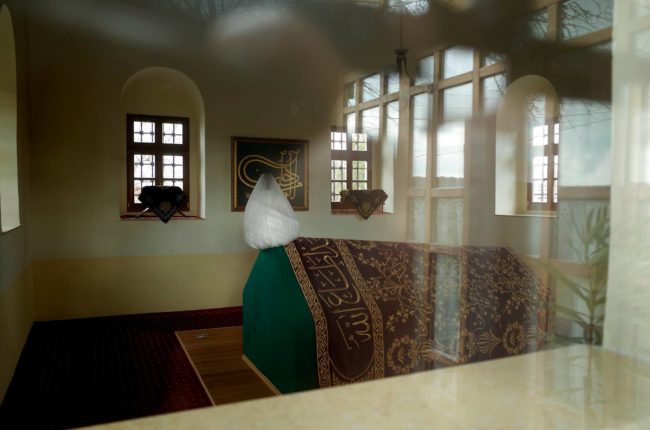 Kosovo - The turbe of Sultan Murat near Gazimestan where his heart and internal parts were buried. He was the only Turkish sultan to die in a battle. - e.v. photo 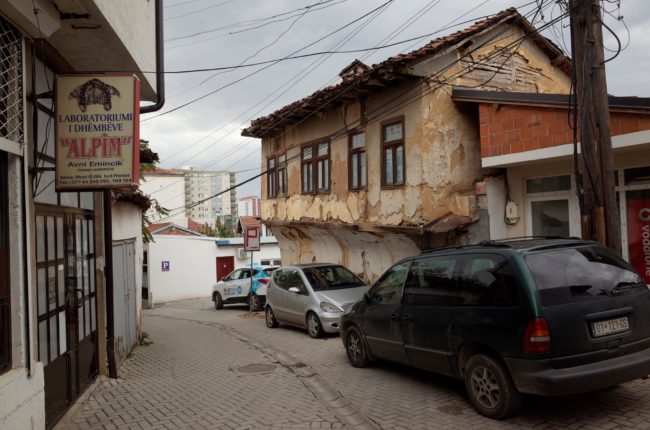 “What is the state of democracy in Kosovo? The government holds at least half the country’s media outlets. Corruption, bureaucracy, and cronyism all run rampant.

When it comes to Serb-Albanian relations, it’s worth remembering that twenty years have passed since the war, and both groups have acclimatized themselves to the status quo, living inside an artificial country. Still, there’s always the danger that some politicians and/or irresponsible individuals will again stir up trouble between Albanians and Serbs.” (bédé, 2019) 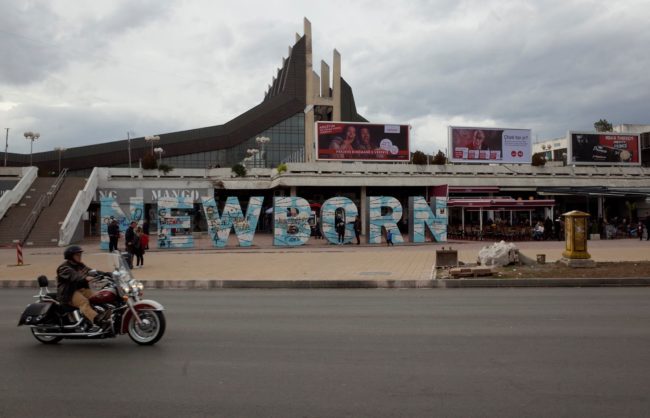 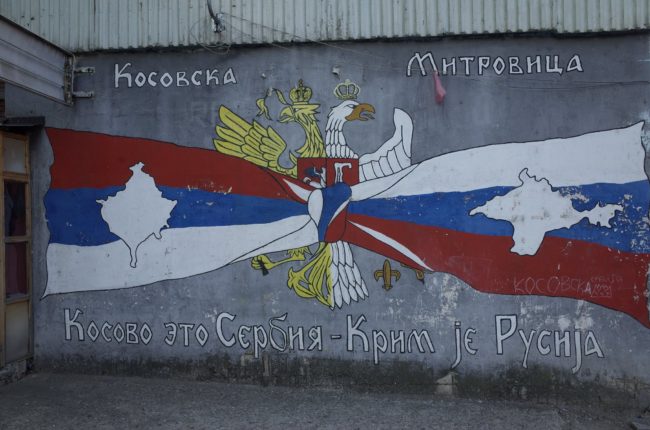 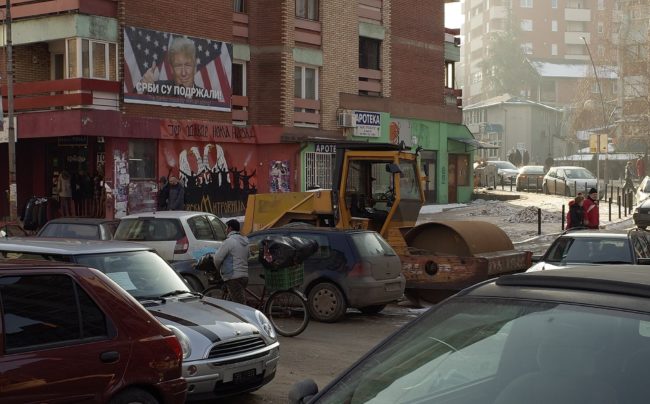 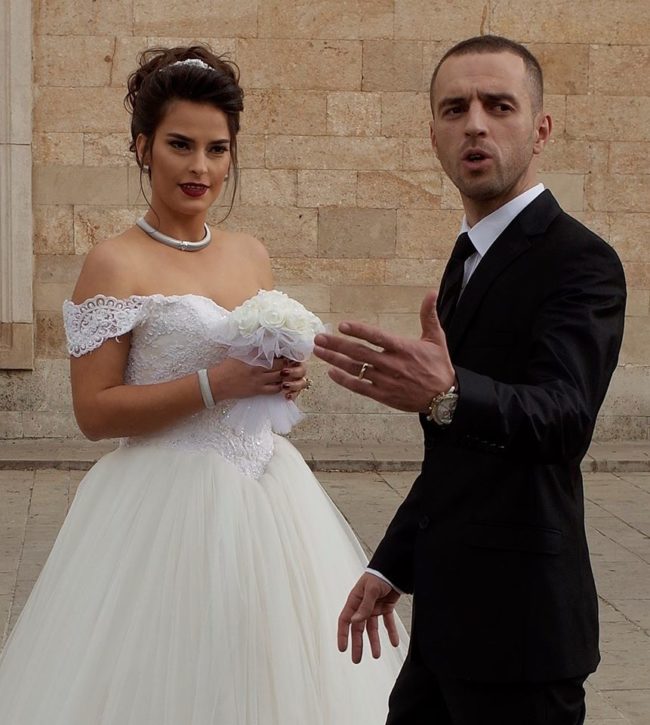 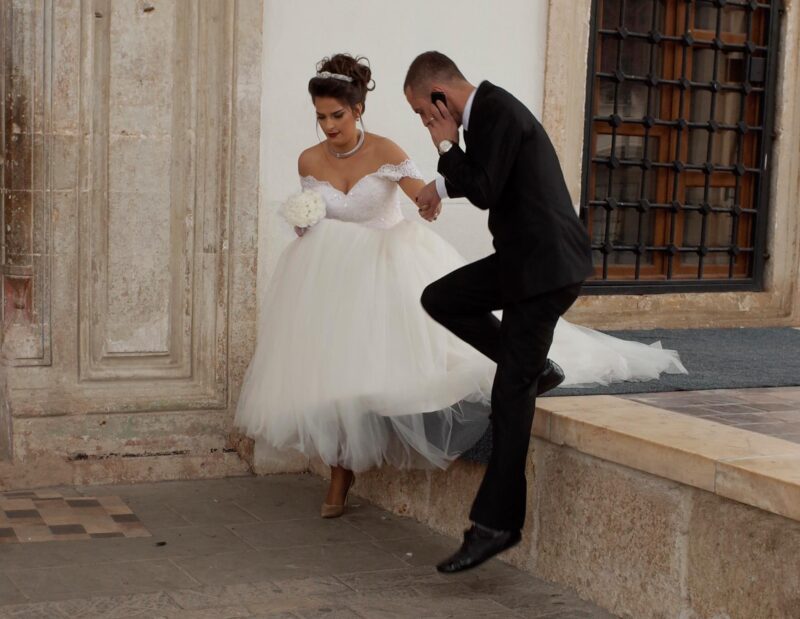 Kosovo - Pristina - what could be such an important phone call? - e.v. photo 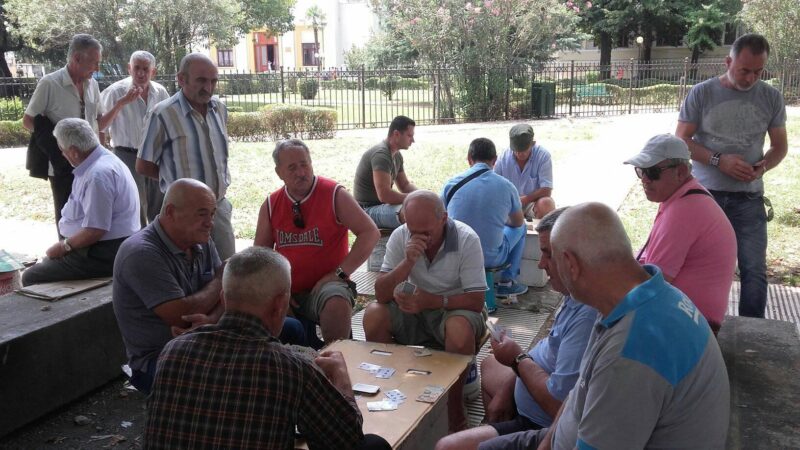 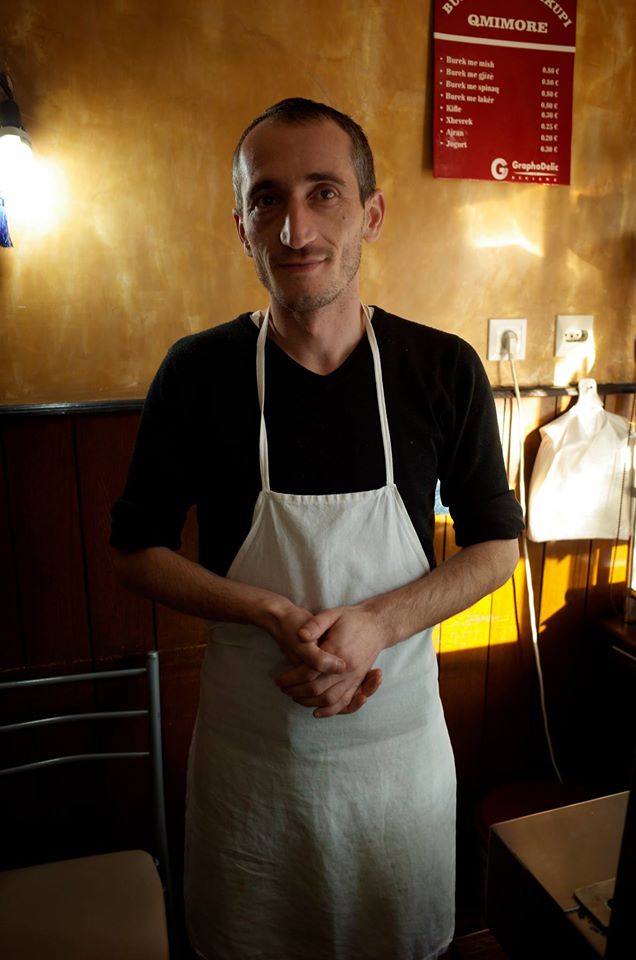 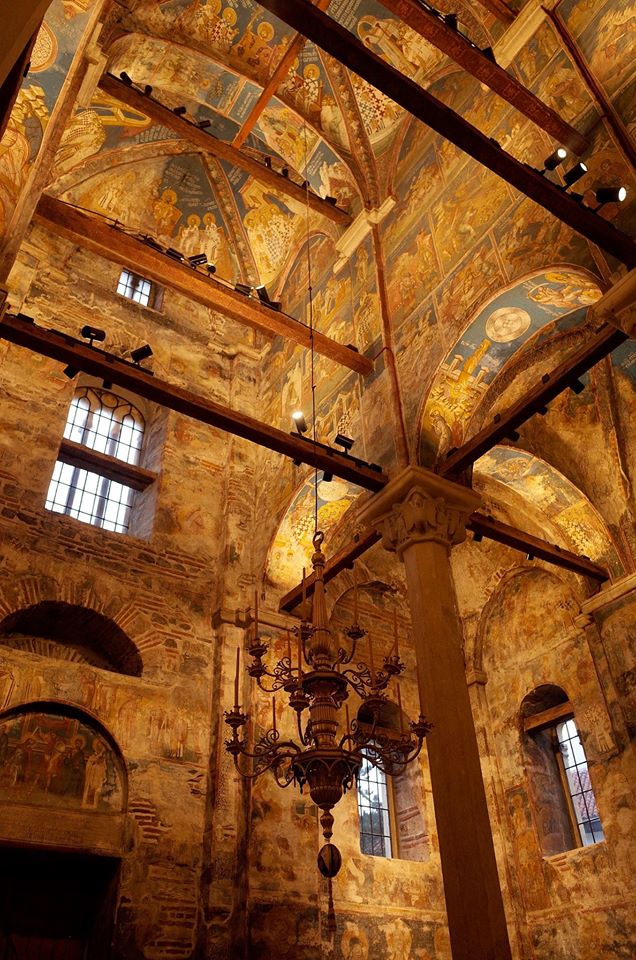 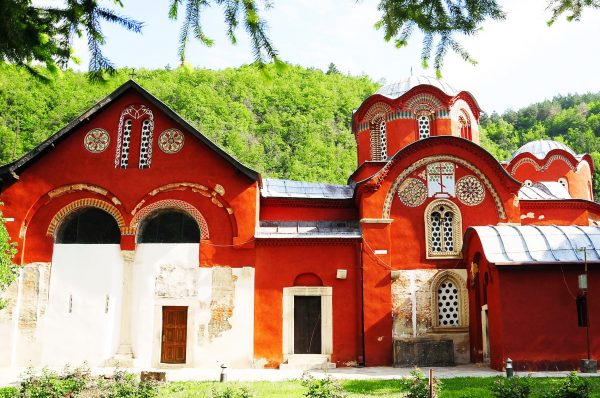 Kosovo - Peja - the monastery of the patriarchate - Elter photo

“The capital is, architecturally speaking, a total mess, and there aren’t a lot of tourist attractions. What there is can be seen in about three hours. There are one or two mosques, churches (one with a view), and the brutalist spectacle of the National Library, as well as one or two smaller museums.” (2019)

It’s nice, at least, that you can spend maybe four hours pleasantly strolling through the city. The thing you really have to see is the National Museum – it’s a strange and interesting building, both inside and out, and even after visiting it, neither of us are sure whether we like it or not. The main thing, though, is that it made a big impression, and whenever I think of Pristina, it’s the library that will come to mind. It may not be a conventionally pretty building – indeed an internet poll voted it the 9th ugliest building in the world – but it definitely captures your attention. Everyone has an opinion about it, and it evokes emotions from everyone who sees it. Perhaps that’s the most important thing, which makes it a masterpiece of its kind.” (2019) 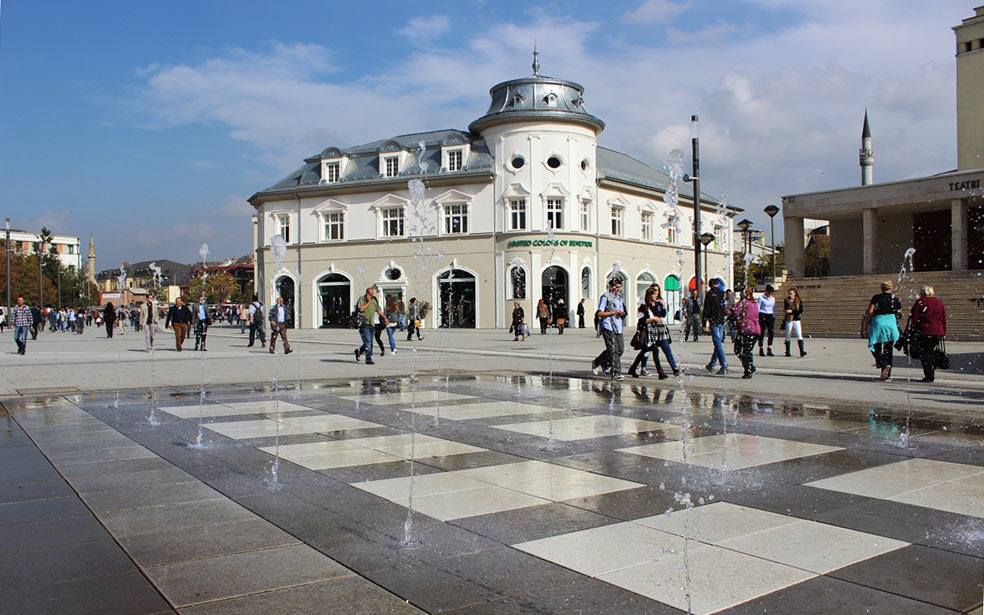 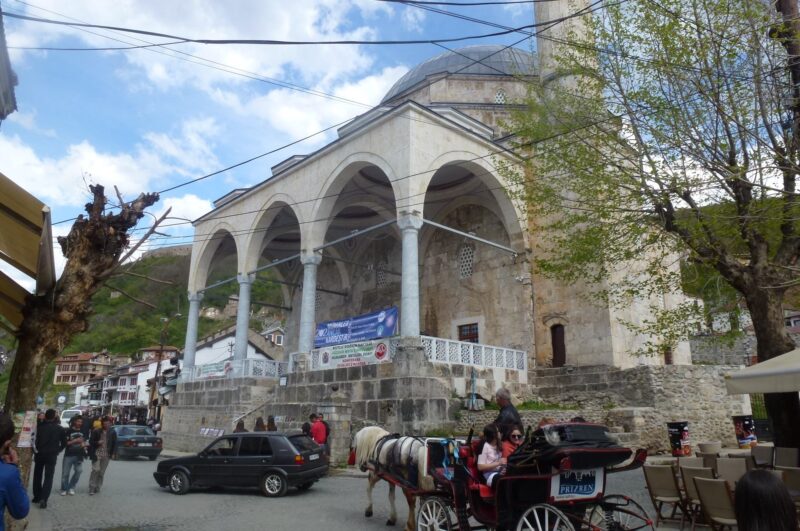 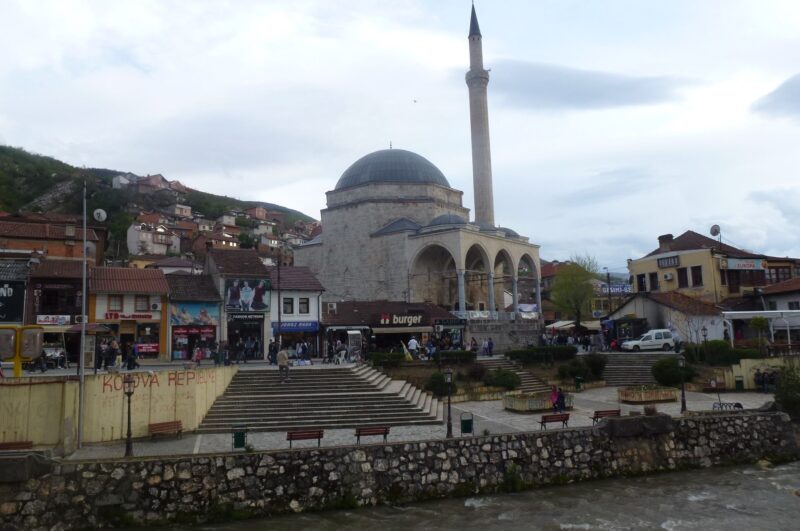