1. Even if very brief, our close encounter with the silverback gorillas in the Virunga National Park was an experience we will never forget

2. My friend observed that the local beer is top quality (learned from the Belgians?)

3. The gigantic market of Kinshasa

4. The northern part of the country has the most exciting tourist attractions

5. Free accommodation at a Christian monastery

6. Most of Kinshasa is surprisingly clean, especially in African comparison.

1. The tourist infrastructure is dreadful

2. The inflated price of the tour in the Odzala National Park: 1500 euro/day!

3. When we were organizing the trip most of the local contacts did not even respond to our e-mail

4. The once splendid houses are now in a terrible shape in Kisangani (former Stanleyville)

5. Any dealing with the authorities is cumbersome and accompanied by invariably stern faces

6. In cities, people don’t like it when a tourist wants to photograph them.

7. Accommodation in Kinshasa is much more expensive than in Brazzaville, in the,,other Congo"

“We soon realized that the gorilla families were not operating by the same rulebook as ourselves. The gamekeepers had told us not to venture closer than seven meters, but some of the young males, otherwise known as blackbacks, interpreted this seven-meter rule somewhat flexibly, and charged towards us whenever they felt like it.

We were under the impression that the most important thing was to keep a safe distance, and avoid any sudden movements. The head of the family, meanwhile, glanced up now and then as he chewed leaves and branches, and whenever he did we all pretended we weren’t looking in his direction. (2016) 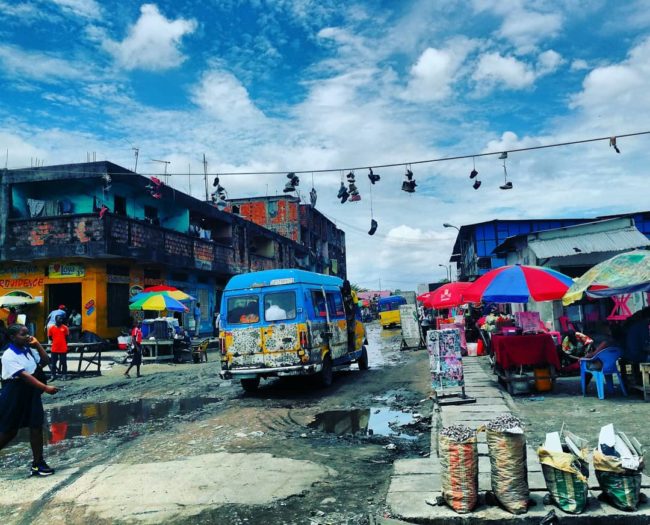 “Many kinds of crab and fish – including the tilapia, which does not enjoy good PR – are common in Congo cuisine. They also serve nutritious carb-rich garnishes, including fufu, which is made from manioc flour, and served with meat, smoked fish or vegetables.

Another common source of carbohydrate is the plantain, or cooking banana, which is traditionally fried in oil and eaten like potato chips. Of spinach and sorrel alone there are dozens of varieties, each completely unique, and very good. There are also endless varieties of exotic fruit, with passion fruit, mango, and various bananas. Of the traditional donuts we particularly liked the mikate, which is served with peanut butter.

,,Public safety in Kinshasa? Non-existent. Still, it has apparently improved a lot since the gangs of aggressive kids were rounded up (and those who resisted were shot). You constantly have to be on the look-out, and your sunglasses will be stolen from off your head through an open window if you’re not careful…(2017)

,, Kinshasa is the third most populous city in Africa. It lies on one side of the Congo River (on the other side lies Brazzaville, the capital of a separate state, the Republic of the Congo). For that reason, and in contrast to other destinations I have visited in the area, malaria is common even in the city, and there are plenty of mosquitos. " 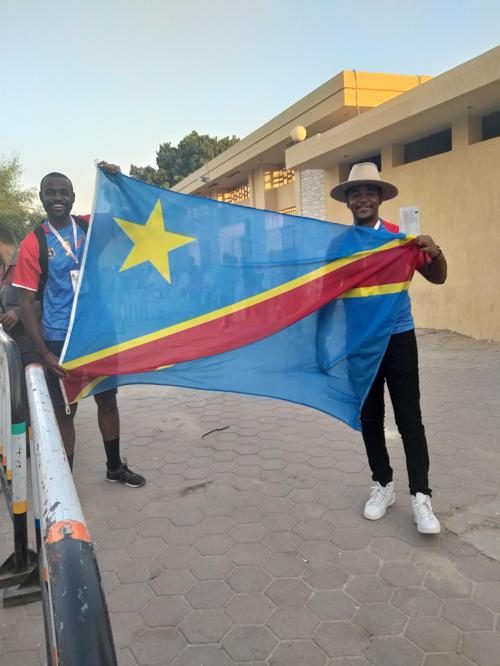 Democratic Republic of the Congo in brief

Democratic Republic of the Congo (henceforth: DC Congo) is a vast country located in Central Africa. DC Congo should not to be confused with the neighboring, much smaller Republic of Congo (Brazzaville Congo), a former French colony.

Neighbors: Republic of Congo (west), Central African Republic and Sudan (north), Uganda, Rwanda and Burundi (east), Angola and Zambia (south) – DC Congo has access to the ocean through a short, 40-kilometer (25 mi) stretch of Atlantic coastline (just enough to accommodate the mouth of the Congo River).

The country was a Belgian colony (named Belgian Congo) until 1960, when it became the independent Republic of the Congo. It was called Zaire between 1971-1997.

Capital city: Kinshasa (formerly Leopoldville) with a population of 7.7 million!  (2020) – This is the second-largest French-speaking city of the world (the total metropolitan area of Paris being the first).

Kinshasa and Brazzaville, in the next-door Republic of Congo, are the closest capital cities in the world. A bridge across the Congo River still needs to be constructed to connect the two cities.

Tourists should be cautious about taking pictures of locals as many believe that “capturing a person’s image” removes his/her spirit.

Languages: French is the official language, but about 240 local languages are spoken - Four indigenous languages have been recognized as having official status, namely Kikongo, Tshiluba, Lingala, and Kiswahili.

Many local languages exist in the country, so French makes it simple for the Congolese to talk to other citizens. By speaking French, they avoid conflicts about which native language should be a lingua franca.  French also faciliate the Congolese to communicate easily with people of other francophone countries of Central and West Africa.

Belief in witchcraft is common. Even children are often accused of being witches. Some of these kids get beaten, and others are even killed. But most become homeless after their families cruelly abandon them in the streets.

The political and security situation of DR Congo is fragile. The state is weak and presidential power has not been used efficiently enough to guarantee the internal stability of this vast country. Militant armed groups regularly terrorize civilians in some eastern parts of the country. Many of these groups are actually criminal organizations that use the profits from sales of minerals (tun, tantalum, tungsten and gold) to wage ruthless intimidation campaigns.

DR Congo is a country that has an abundance of natural resources and is home to some of the largest reserves of the most sought after mineral deposits on earth (gold, tantalum, tungsten, and tin – all minerals indispensable in electronics such as cell phones and laptops). Despite all this wealth, its population is still strikingly poor, mainly because of the continuing economic and social crisis resulting from the civil wars that hit the country in the 1990s.

Average net monthly salary for urban employees: 850 USD (2020) – but most people earn less than 60 USD/month. Almost 65% of the population has an income that falls below the poverty line.

The local beer, the Simba, is not only trendy, but its bottle is nearly twice the size of most beer bottles around the world.

Safety: Safety is terrible in some eastern and northern parts of the country. The big cities are safer than most countryside areas. Luckily the tourist attractions happen to be in reasonably safe regions. Military checkpoints along the roads are widespread.
Some eastern areas of the country are Ebola-stricken.

Optimal timing of a tourist visit: December-February for the north, May-September for the south

The top tourist attraction of DR Congo is visiting the mountain gorillas. There is no way to make such a visit individually. It is highly recommended to book an organized tour through a reliable tour operator or a local travel agency.

1. The vast majority of the people live in poverty, despite the country’s abundant natural resources and the second-largest rainforest in the world. Only 20 percent of the population has access to safe water, 70 percent has little or no access to health care, 16 million have critical food needs, and the country has the highest infant mortality rate in Africa. Very few social services are provided to the population by the government.

2. There is no dominant or dominated ethnicity. Likewise, no ethnic group has an advantage over others. However, people continue to do each other favors according to their ethnic affinities.

1. The Congolese are very open and curious about almost everything. 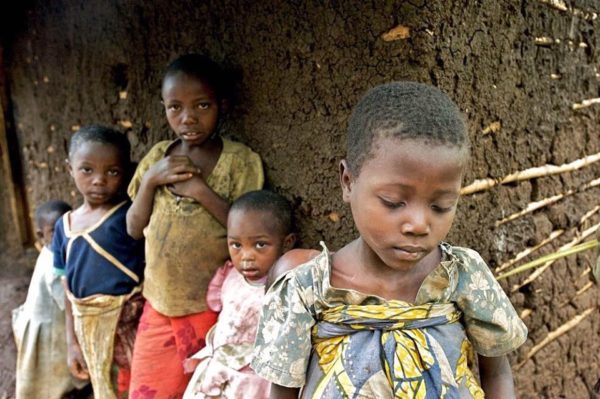 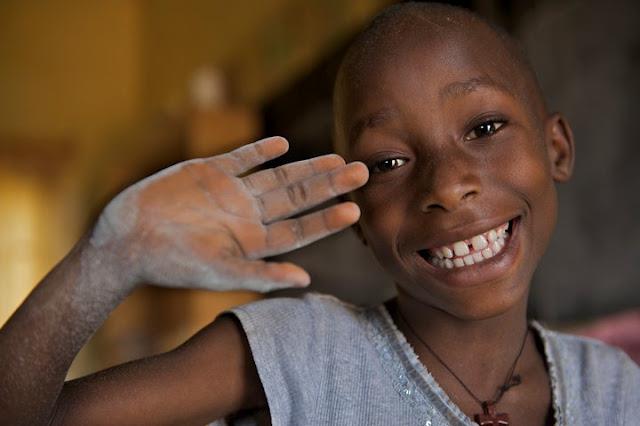 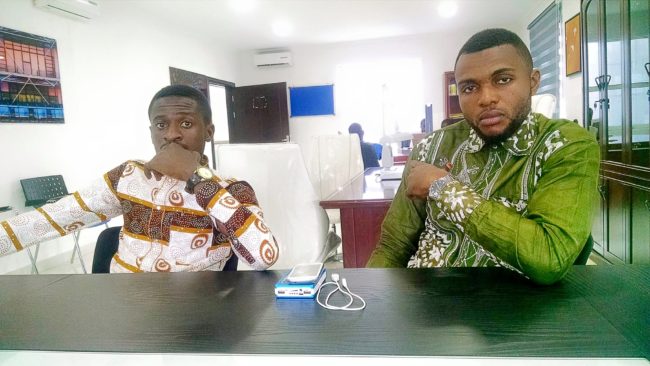 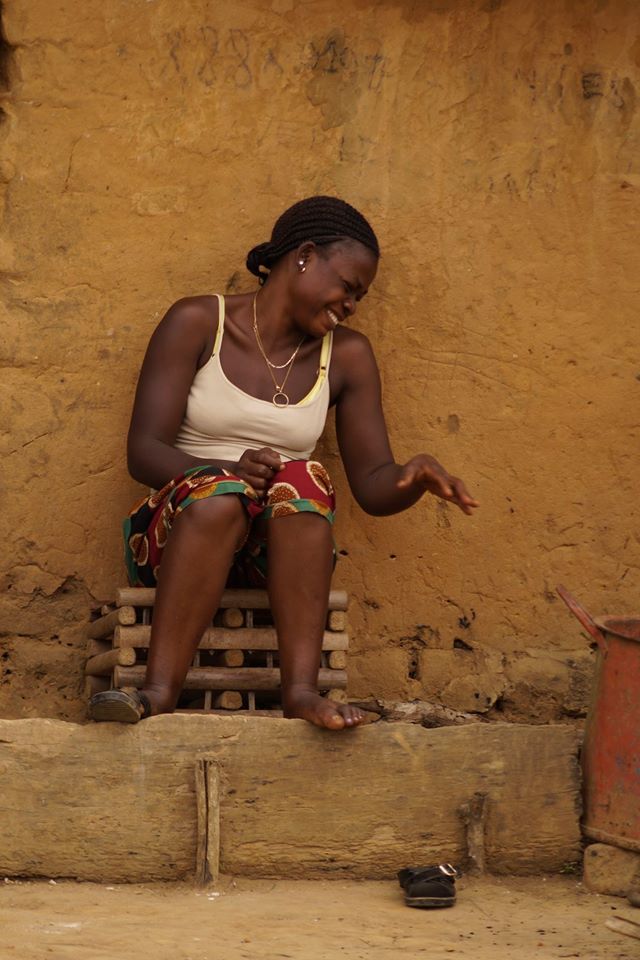 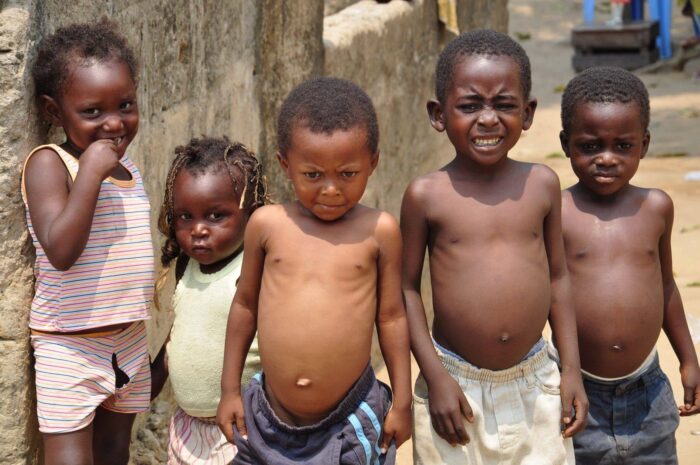 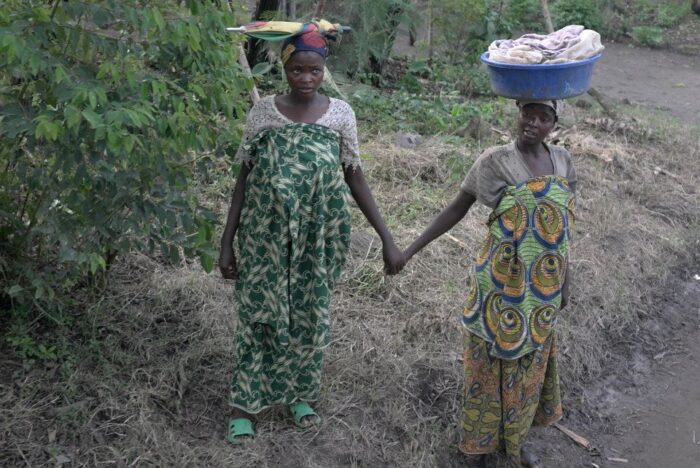 Democratic Republic of Congo - Women carry all what they can on their heads, even an umbrella - o.v. photo

,, This is a damned big city, so we hop on a bus to take a look around. Another characteristic of Kinshasa is the difficulty of taking photos. A few years ago they passed a law, allowing tourists to take photographs, but local taboos mean it’s still risky – people almost always refuse if you ask.

Unfortunately, there isn’t much of great interest to be seen in the city. Slums, broad boulevards, some more up-market neighborhoods (Gombe) and a few bigger squares (Place Victoire and Matonge). We took a look at the parliament, where photography is now permitted, and a mausoleum which looks not so much socialist-realist as positively North Korean. This is the monument to old Kaliba, who liberated the country from the dictator Mobutu – a bondage symbolized by chains on fists the size of houses.” (2017) 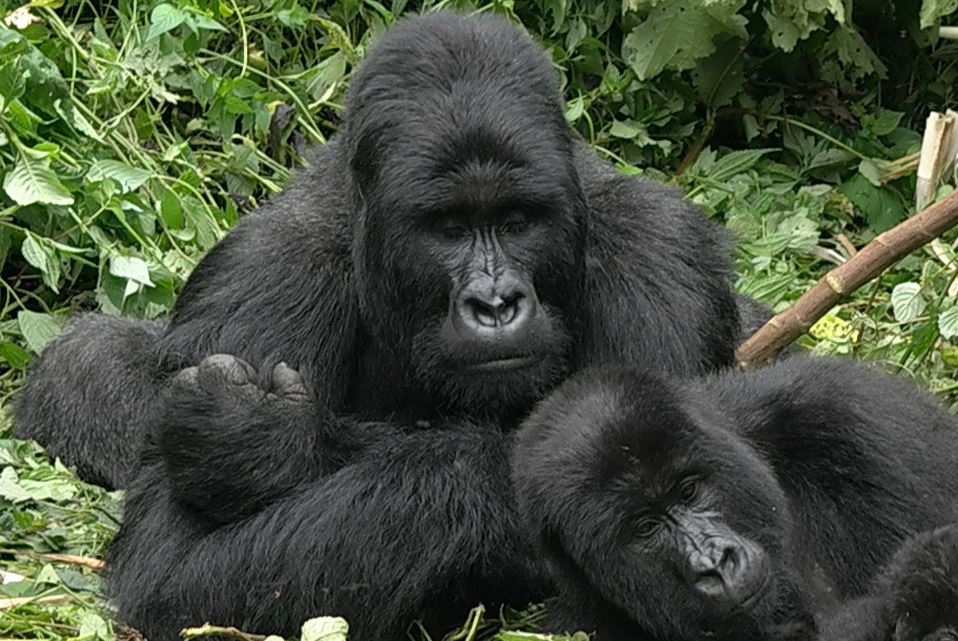 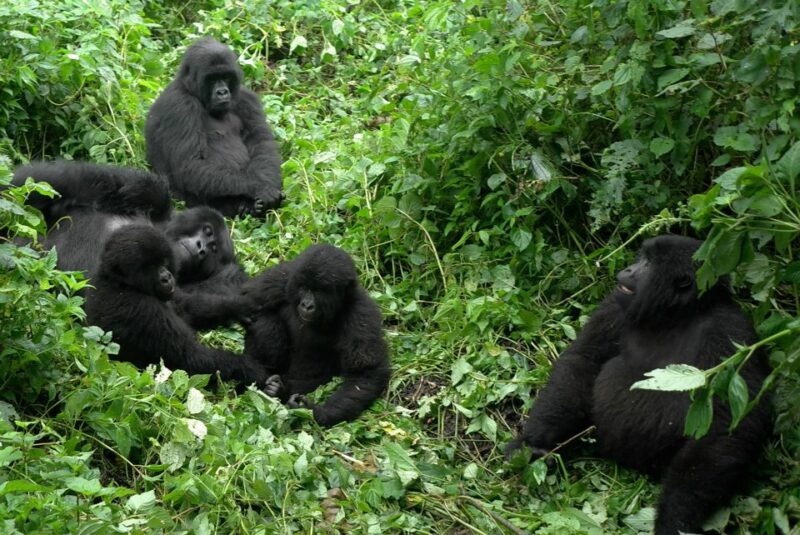 Democratic Republic of Congo - gorillas - Thank them for their patience :-) Sometimes they just condescendingly stopped paying their attention to us. - o.v. photo 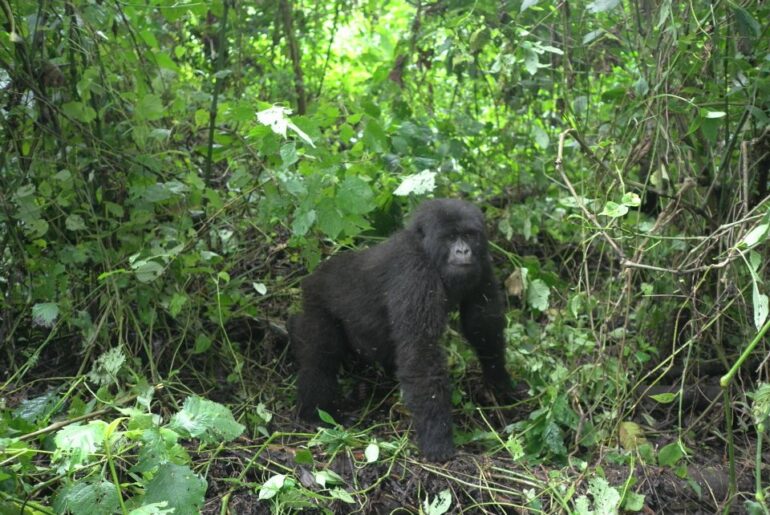 Democratic Republic of Congo - gorillas -After an hour of our stay as guests, some young gorillas seemed to understand what we expect from them and happily came up to pose for the photos - o.v. photo