1. The country’s unbelievably rich historic and cultural heritage, and the opportunity to learn a lot about one of the major pathways of human civilization, as well as seeing the background to what will soon be the world’s most powerful nation

2. Seeing the Great Wall is an unforgettable experience

3. If you’re smart, you can buy cheap and spend relatively little money

4. Discovering the many different, exciting styles of Chinese cuisine

5. Spending some time exploring the more obscure corners of the Forbidden City

6. Exploring the hutongs, or alleyways, in the few parts of Beijing which have not been modernized

7. Cycling by the city walls of Xi’an on a rented bike, and of course the Terracotta warriors

8. The surprise, when it turns out that not every Chinese person scowls at foreigners

9.The Bund in Shanghai, with its colonial-era buildings, and the French quarter

10. I really liked the fact that in China, tipping is not the norm! (Both at home and abroad, I always stress about how much to give)

1. The pollution, both in the air and on the ground, is appalling – the smog in big cities

2. At this density, the crowds of people become a real headache, especially when travelling by bus or metro at rush hour

3. Hawking and spitting on the street, constant cigarette smoke, the loud way locals talk, the begging, shoving, jostling and general lack of manners

4. The disgusting public toilets, and the fact that the tap water is not drinkable

5. The linguistic difficulties of communicating with locals, especially outside of big cities

6. The size of the country makes it impractical for tourists to see everything of interest

8. A lot of serious problems and complications for tourists travelling individually

9. For some reason Chinese food tastes better outside of China

10. They don’t just stare at tourists, but sometimes even follow you (unless that was the secret police)

11. China is getting more expensive, and you notice it! 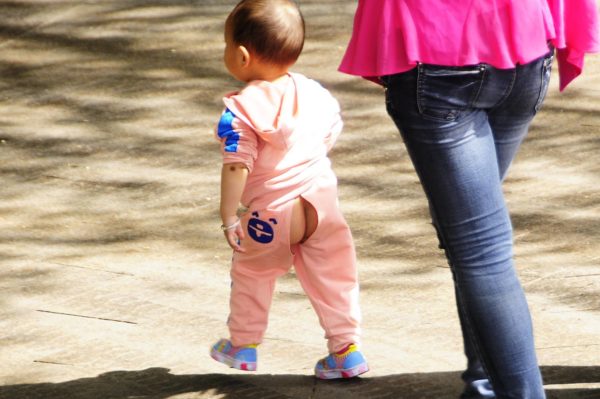 China – Likes&Dislikes
Likes
1. It’s a wonderful feeling to be positively surprised by the locals – they really are friendly, and even if they don’t speak a word of English, they still try to help
2. The Great Wall near Beijing
3. The Terracotta Army in Xi’an
4. Lingyin Temple, Hangzhou
5. The contrast between the bustle of the bazaar and the calm of the Great Mosque in Xi’an
6. Eating street food in the bazaar of Xi’an
7. Looking down from the 118th floor of the Shanghai Tower (I understand why most people now go there for the skyscrapers)
8. Travelling on the Super Express
9. Climbing up to almost the highest point in the tea plantation (Meijawu) and looking down over the landscape
10. Stumbling upon a food court in Shanghai, with loads of local and street food
11. Strolling along the Bund in Shanghai, looking at the people and the skyscrapers
12. The West Lake Show, Hangzhou
13. An introduction to Chinese calligraphy at the Great Wild Goose Pagoda, Xi’an
14. Looking over Hangzhou from the top of the Six Harmonies Pagoda
15. Taking the metro in Beijing and Shanghai
16. All across the country they’re making efforts to keep things clean and tidy
17. The tourist attractions are well maintained
18. There is English-language information at all the major sights
Dislikes
1. Why do they have to do that gross spitting thing while eating?
2. The constant surveillance, and the CCTV and other cameras everywhere (even in taxis) can be very oppressive
3. It’s a little disappointing when even the receptionists at a four-star hotel don’t speak English
4. A lot of tourist attractions are cordoned off, meaning you can’t really get close to them, and this does reduce their interest somewhat (of course, this excessive protection is somewhat understandable on account of the people.)
(Sophie, 2018)

“Ask anyone who’s been to China whether they liked the country, and – more importantly – what they thought of the Chinese. Travelers are sharply divided on China and Chinese people, and the majority probably leave with a negative overall impression, especially after a short visit: You’ll find a lot of people saying that the Chinese are crude (they spit, they litter) and this leaves an impression on visitors. I’ve even heard some say that China would be a great place if it wasn’t for the Chinese. I don’t think it’s a good idea to generalize in this way: I know a lot of Chinese people who behave just like Europeans, but it’s a fact that these instances of ‘bad manners’ seem to make a very strong impression on Europeans. There are people at home who litter, of course, but perhaps China’s huge population makes these instances more visible, and leads to the deeper impression it makes on us. (2017)”

1. Hotels require a permit by the authorities to host foreigners, so not everyone can. We recommend making your reservations in advance through Booking or Airbnb to avoid arriving at a hotel at midnight and being rejected.

1. Most restaurants do not have western cutlery. Learn to use chopsticks!

2. In the restaurants, no tip is expected. The cheques include the service charges.

3. Avoid street food for at least the first few days! 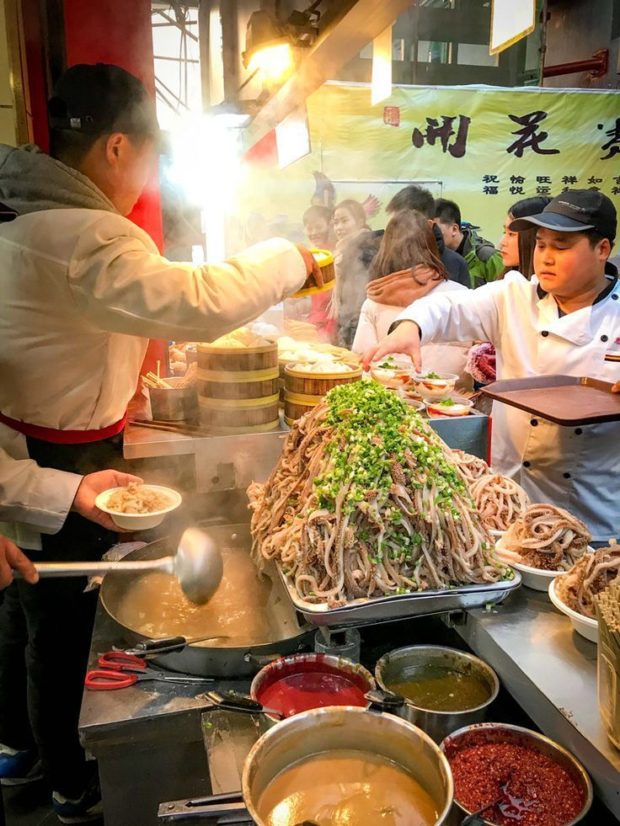 1. You can practically go anywhere without carrying cash. Recently, there was a reform that allows linking international credit cards to Wechat and Alipay to make international payments with your credit card and avoid carrying cash. From restaurants and taxis to street food, everything can be paid for with these two applications. And they are very safe, don't worry.

1. You can't and shouldn't bribe the cops. Do not even try.

1. Many restaurants and public restrooms do not have napkins, toilet paper. We recommend that you stock up on disposable towels before you get a nasty surprise. They are sold at any convenience store, and they are usually on one side of the counter.

1. It depends on where you go, but most people don't speak English. It is not so much a problem in big cities, but the further you go, you will have to rely on dictionaries and translation apps. Google Translate does work (but download the Chinese dictionary before you start the trip, so it works without being connected to the internet), and it does a decent job. We also recommend Pleco.

2. Facebook, Google, Gmail, Google Translate, Twitter, Instagram, Youtube, and many of the social networks you know are blocked (not in Hong Kong). There are ways to access them in China, such as by using a VPN. If you plan to use a VPN, we recommend that you use a paid service. If it's free, you may have security concerns.

WeChat is excellent, yes. But it is not for all cell phones. It is a giant program (like 100 megabytes) that almost eats away the memory of any low or medium-range cell phone.

China - national flag - the four smaller stars that surround the big star symbolize the four social classes (the working class, the peasantry, the urban petite bourgeoisie and the national bourgeoisie) - what about the fifth class?

China is in East Asia (some say the Far East).

Some behaviors that you absolutely have to avoid in most countries in the world are totally acceptable in China: spitting, yawning, grunting and burping are all standard while eating in China.

Religion: Due to the huge population of China, almost every religion of the world is represented there. The most prominent are Taoism, Confucianism and Buddhism. An interesting fact is that there are more Christians in China than in Italy. However, about 55% of the population is unaffiliated with any religion.

China is a Communist country with a one-party system but has gone a long way towards becoming a market (capitalist) economy. China’s economy is the second largest in the world and will likely overtake the U.S. sometime this century.

Currency: yuan (CNY) - Locally, it's called the renminbi, which means "the money of the people.”

The 3 most popular tourist sites are: The Forbidden City, The Great Wall, The Terracotta Warriors 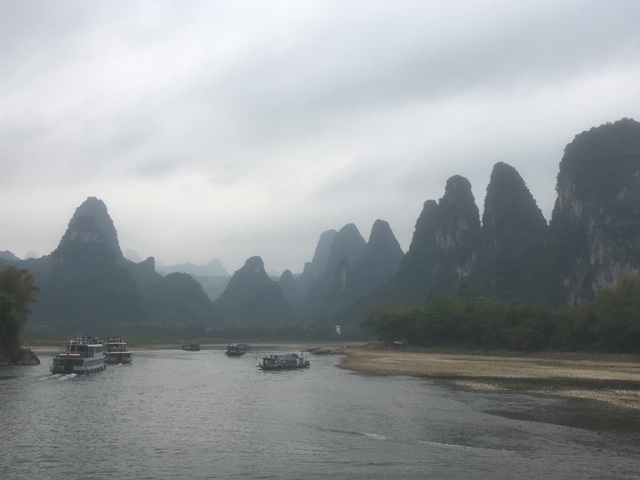 1. Although it is not common to talk to strangers on the street if you get lost, the Chinese will be more than willing to help you.