1.    Cleanliness (Riga is one of the cleanest capitals in Europe) and fresh sea air
2.    The Art Nouveau buildings of Riga

3.    Beautiful Jürmala
4.    The unspoiled Baltic coastline
5.    The divine raspberry and blueberry cakes
6.    The fall colors in the countryside, and the lovely wooden houses in the villages
7.    Gauja National Park a good example of successful environmental protection
8.    Rundāle Palace, the Latvian Versailles
9.    Ventas Rumba, the widest waterfall in Europe
10.  Liepāja town

1.    Latvia’s boring topography (the highest point is just 311m!)
2.    Many roads are in bad condition
3.    Weak tourist PR
4.    Bad value for money in many Latvian hotels and restaurants
5.    I’m not a fan of their cabbage soup and smoked fish
6.    Not many must-see signts outside of Riga and Sigulda
7.    Latvian people are either unfriendly or shy with foreign tourists
8.    Sea temperature too cold to swim, even in summertime
9.    The toilets on Latvian trains
10.  Rainy climate

“Batlas Majas. This isn’t the name of a dish, but of a restaurant in Jūrmala, which was our home in this country for one week. It’s a pretty good feeling to have a sandy beach just a minute’s walk from your front door, and a huge pine forest right behind it. Latvian cuisine is a mixed bag – some of the stuff we ordered was unfit for human consumption, but on the other hand, the 36.Line Restaurant would be a tempting proposition anywhere in the world. We already suspected as much when we saw the ‘line-up’ of cars in the parking lot: Bentley, Maserati, old-timer Mercedes, and Lamborghini – mostly with Moscow license plates. We ran into plenty of examples of ‘Moscow chic’ during our stay.

The Latvians are generally friendly and courteous, though of course, a smattering of the local language doesn’t hurt.

“The fact is, Riga is the only real marvel in the country, but there are a few scattered medieval ruins and plenty of Soviet ‘curiosities’ everywhere. The prices are a bit higher than in the former Eastern Bloc countries of Central Europe (is anyone still surprised by this?) but at least accommodation can be found very cheaply, and public transport is excellent everywhere.

Riga is an unbelievably beautiful city, but otherwise, the country as a whole didn’t particularly impress me.

There are some natural attractions. Two days is enough for Riga, plus another day for Sigulda, though if you want to go for a hike, you should probably add on an extra day. Everything can be reached easily, either on foot or by bus, and directions are clear, so you shouldn’t have any problems. The seaside is nothing special – there are a few interesting war relics, and some leftovers from the Soviet period, but it isn’t worth spending a lot of money to see these, and if you’ve only got, say, a week in the Baltic I’d recommend heading south to Vilnius instead.

As for the Latvians themselves, I can’t say I was particularly charmed by them. I could hardly communicate with anyone, and they weren’t especially friendly. I tried to talk to a lot of people, but it didn’t really lead to anything. Not many people speak English, and when they do, they have such a strange accent that a few times I wasn’t at all sure I understood what they were talking about.

As for the local cooking, I wouldn’t place Latvia in the top category of international cuisines. Potato is king here, but they do cook some good meat dishes. There are plenty of expensive (and bad) restaurants in the center of Riga, so it’s worth going a few streets out of the center, where the food is both cheaper and better. I saw a few very cheap dining establishments, but none of them looked altogether inviting, so I stuck to the slightly more expensive places.

Would I go back? Probably not. Riga is spectacular, and if it was closer to home I’m sure I’d go back more often, but I feel as though I saw everything I wanted to see, and beyond the sights of Riga, Latvia didn’t have much of interest for me.” (2016)

“The Latvians are very friendly, open, and hospitable. There’s no language barrier – everyone speaks English, even the conductors on the Riga trams. Likewise, anyone with some knowledge of Russian won’t find themselves tongue-tied in Latvia.

Latvia is an exquisite little jewelry box on the Baltic. The hotels are comfortable and reasonably priced, and the local gastronomy is worth exploring. It’s also a good spot for a company team-building getaway. Among the activities, I’d particularly recommend are, for the boys, the ever-popular military games, with bunkers and tank tours. There are also tasting sessions for Riga Black Balsam, pub crawls, baths, or even an Air Baltic flight simulator at the airport.

Those more interested in culture have plenty to choose from, depending on their particular interests. The National Museum is housed in a beautiful building, and those interested in art will find its exhibits extremely stimulating. If a traditional museum experience isn’t your thing, there’s also the Riga Motor Museum.

The most spectacular place in Latvia is probably the Rundale Palace, known as the Versailles of the Baltic. (About 1.5 hours from Riga by bus).

For summer travelers, it’s also possible to enjoy a beach holiday in Latvia. Bathing, however, is more fun for locals and Northern German tourists, as the water temperature rarely rises above 20°C (68F). The most upmarket town on the coast is Jūrmala. Apartments belonging to wealthy Latvian and Russian businessmen can be found here, as well as a  wide range of wellness hotels and excellent seaside barbecue restaurants. (Anette, 2018) 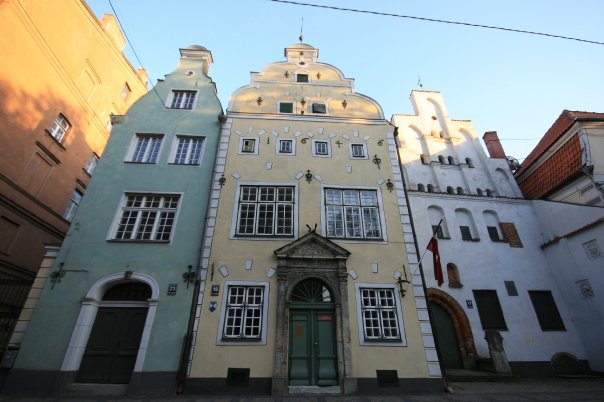 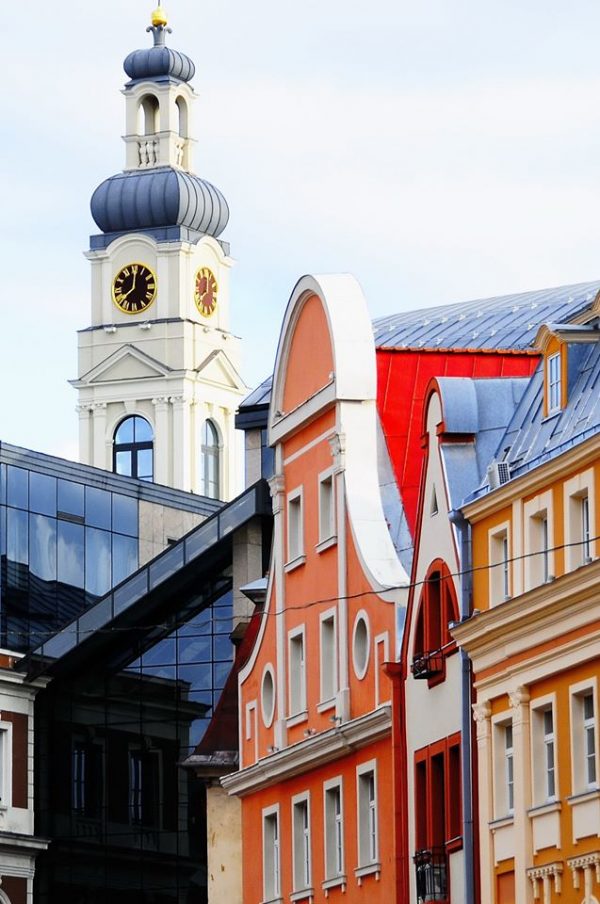 Nowhere in Riga is more than 15–20 minutes by bicycle

A three-course meal for 2 people in a mid-range restaurant would cost about 37 Euros.

“Don’t miss out on the local dumplings, or the stinky (but tasty) herrings. It’s also worth having a glass or two of either local liquor (Riga black balsam, for instance) or Russian alcohol (i.e. vodka), as part of a quest to rediscover this lovable corner of Europe. Do sample the above with caution, however – legend has it that even Napoleon’s combat- and drink-hardened troops were knocked sideways by the locals’ frequent offers of Riga black balsam – resulting in their failure to fully conquer the Baltic. In other words, when the waiter’s eyes gleam and he asks you whether you’re sure you want a glass of the local poison, beware lest you retreat from the Baltic having suffered the same fate as the Grande Armée. (2019)

Service managers do not seem to care about office time, and very often, you will find shops closed half an hour before the closing time, or open half an hour later, even in the center of Riga. 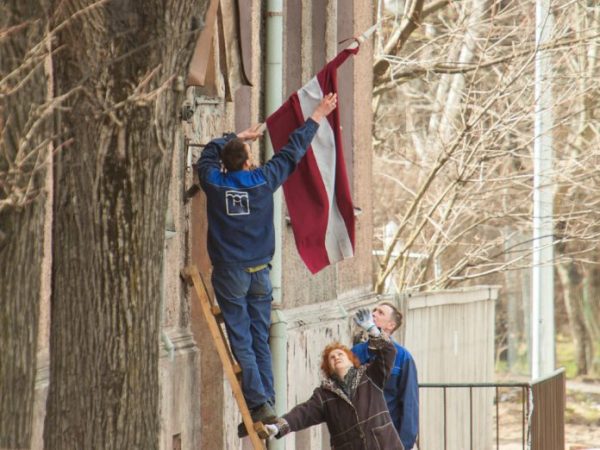 Latvia is in Eastern Europe, is one of the three Baltic States (besides Lithuania and Estonia). Neighbors: Estonia (north), Russia (east), Lithuania, and Belarus (south). Latvia has a coast along the Baltic Sea.

Latvians as an ethnic group are not Slavic!

Language: Latvian is the only official language

Russian is not an official language

Religions:36% Lutheran, 19% Roman Catholic, 19% Orthodox - According to some estimations, 50-60% of the inhabitants don't practice any religion.

Latvia is one of Europe’s least religious societies.

Latvia is member of the European Union and the NATO

Public safety: very good - in larger cities visitors should watch out for pickpockets working in public places, such as on crowded public transport or in markets and other touristy spots.

The winter is long and cold. 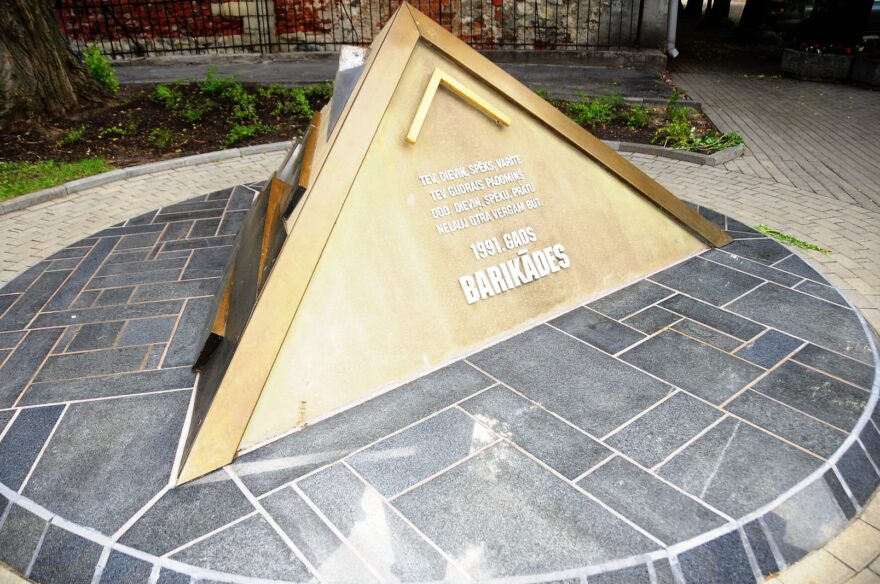 Latvia - Riga - Barricades Memorial - remembering those who died on January 20, 1991 during confrontations between pro-independece Latvians and Soviet forces - Elter photo

The Latvians are very proud of their folk songs, of which there are plenty (estimated at 30,000). Folk song festivals are held very often, and there are plenty of choirs. They sing whenever they can.

A few loose, not entirely serious generalizations (stereotypes) about the Latvians:

•    The Latvians seem not to be particularly strongly bound to their native soil, and are able to up sticks and migrate to a new country with a light heart. This stereotype is contradicted by another, which holds that they are excessively nationalistic.

•    Latvian women are beautiful, while the men are taller than the European average, and often quite handsome. In light of this, it’s strange that the Lithuanians call the Latvians ‘dog-headed’, and the Estonians believe Latvians have six toes on each foot. Russians, meanwhile, say that Latvians are bad-tempered and withdrawn, though tourists often say they found Latvians to be open and hospitable. The citizens of neighboring countries often claim that Latvians are gullible and narrow-minded, but also – in direct contradiction – cunning and untrustworthy.

•    Latvians love nature, and many like to go mushroom picking. Latvians generally have a good sense of humor and are capable of laughing at themselves

•    Many Latvians can speak at least three languages (Latvian, Russian and English) and apparently 30% of Latvians speak Russian as their first language.

Many claim that the Latvians hate the Russians, but this does not always appear the case, at least in everyday life. It does, however, offend Latvians that foreigners, and particularly Russians, are quick to accuse them of fascist tendencies since many Latvians are not inclined to see the Soviet Union as having been a liberating force in 1945. Likewise, Latvians are not at all satisfied with the fact that Russian speakers in the country show little inclination to learn Latvian properly, though it is the national language of the country. What’s more, native Russian speakers have to speak Latvian if they want to work in a job in the public sector, e.g. as a police officer. Otherwise, Latvian shopkeepers are happy to serve Russian-speaking customers – business interests generally trump national pride. Incidentally, the Latvian language is peppered with Russian words, even today.

In general, Latvians are law-abiding, disciplined, and hard-working. They are also very committed to providing care, meticulously accurate information in their communication with one another. Latvians generally have a high degree of respect for private property, and city-dwellers wax lyrical on the attractiveness of rural life and the natural environment. Many people claim that Latvians take order and cleanliness extremely seriously! For example, traffic regulations are followed to the letter, and those who break them are looked down on. 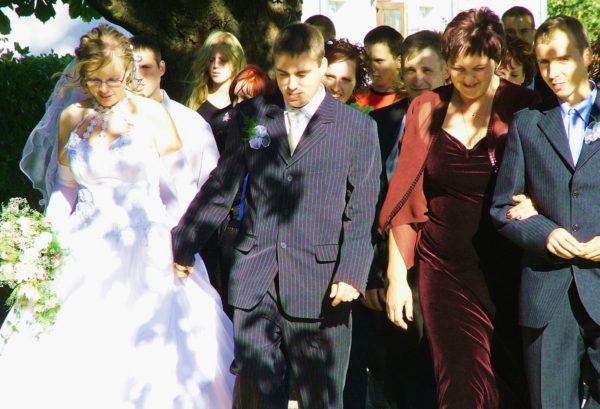 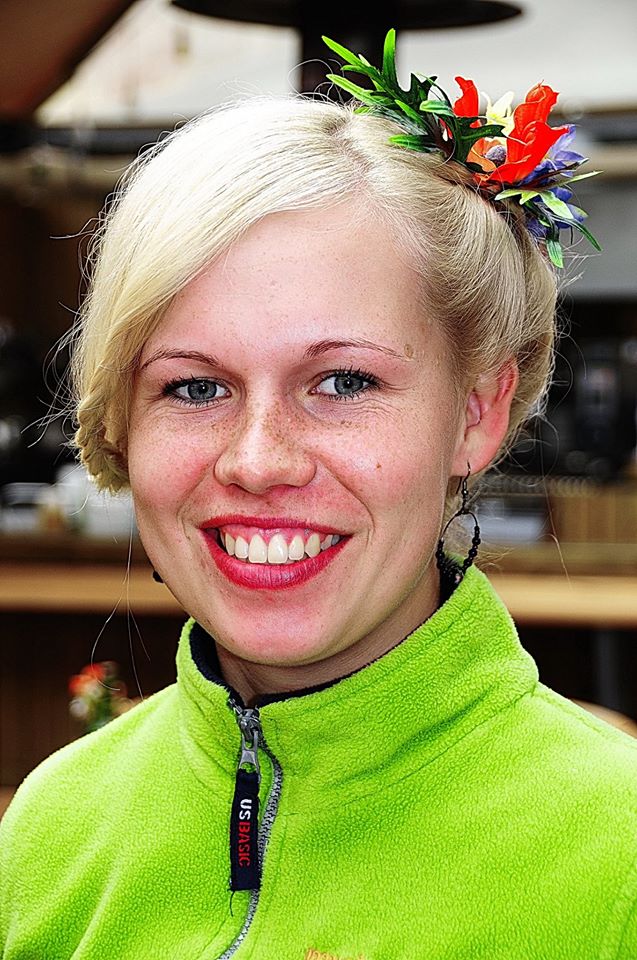 1.In Latvia, it is unusual to discuss religion or someone’s religiousness between colleagues, even between friends, let alone between a Latvian and a foreign tourist.

Smoked or marinated fish is particularly popular, and herring is eaten in different forms in salads with potatoes or beets, marinated, smoked, salted. Cabbage soup is a traditional winter staple. Among the specialties, we can also mention the piragi, a small turnover with onions and bacon, the klingeris, a sort of brioche with raisins and spices, or the Alexander cake,  a pastry filled with raspberries or cranberries.

The gastronomy of Latvia has been influenced by its neighbors: in the north, it resembles Estonian cuisine, in the west, it is more like German cooking, and in the east, it is more like that of Lithuania and Belarus. Cold cuts, sour milk products, and home-made cheeses are the basis of Latvian cuisine. The classic main course is the so-called putra, which is a mix of vegetables and grains, served with bacon, smoked meat, fish, and, again, sour-milk products.

Putels is another traditional dish, and consists of sour oats and peas in a blueberry soup further soured with curds and oat milk. In addition to beetroot salad, meat and fish appetizers, eggs, cheese, cottage cheese, and skimmed milk, cold dishes include salted and marinated herring and smoked fish. Onion and mustard are also frequently added. The lack of hot soups is ‘made up for’ with sponge cake and shortbread cookies, which are very popular among Latvians.” 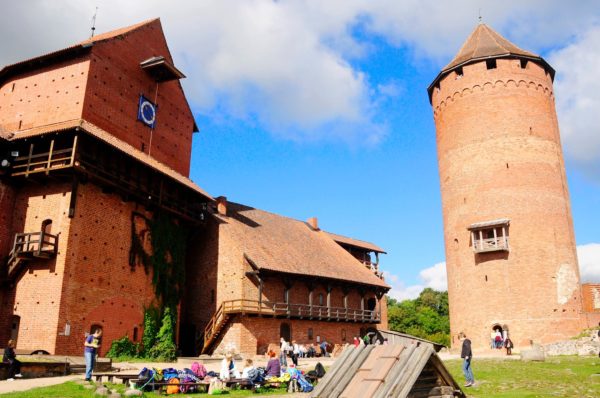 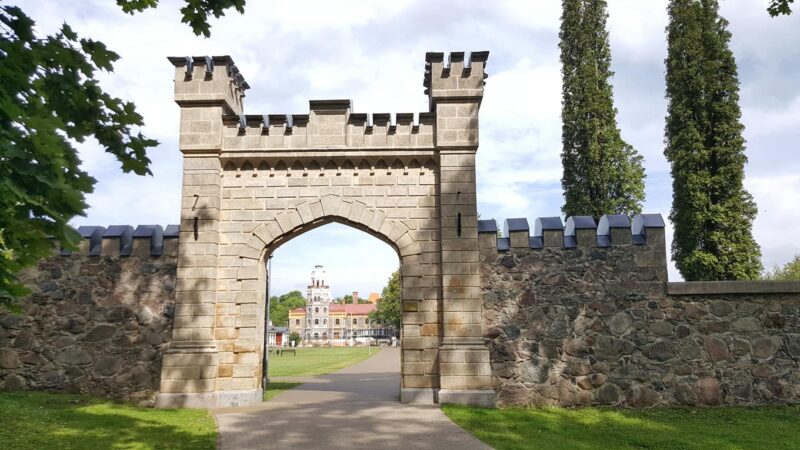 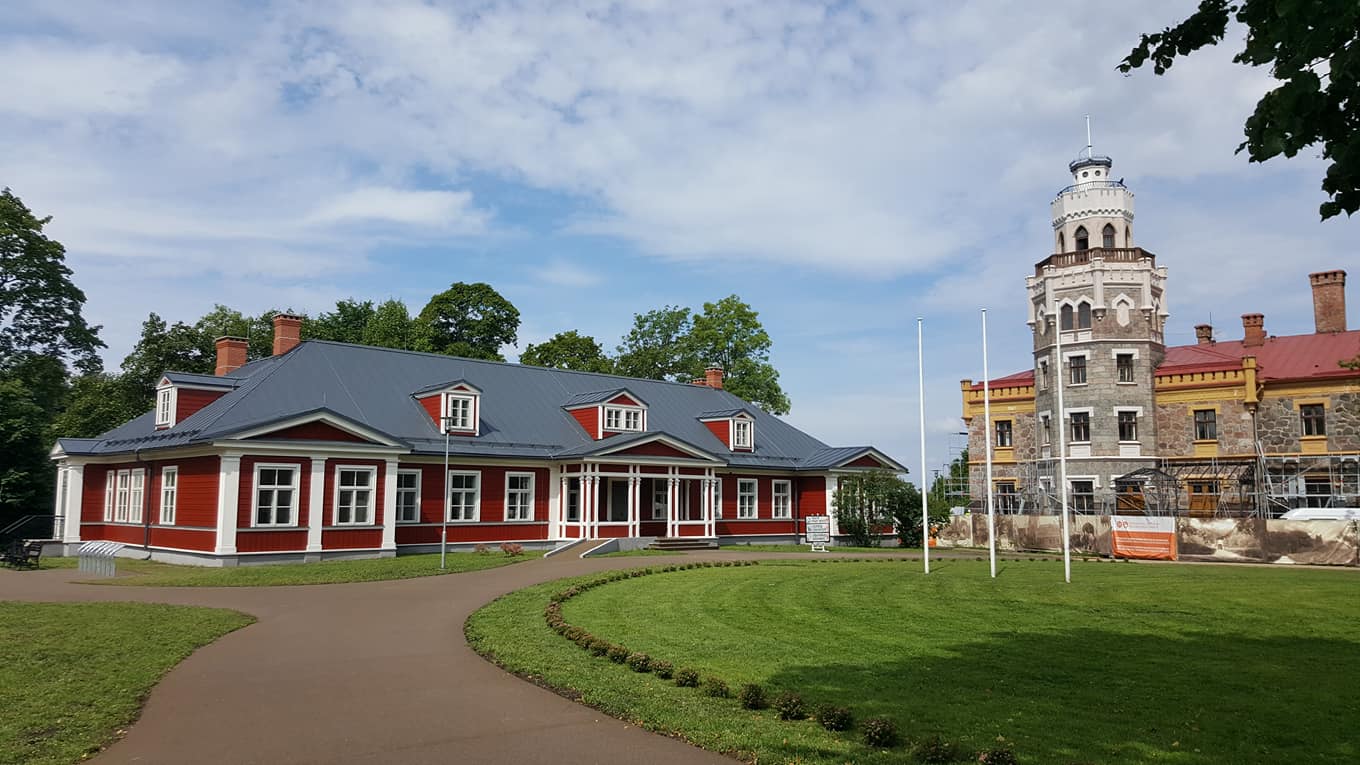