2.    The Sahara is surprisingly diverse, Algerian deserts are among the most diverse deserts in the world

4.    Tourism has not yet spoiled the locals, so those few visitors can enjoy a great deal of hospitality, many locals help tourists selflessly

5.    The almost 1000 years-old Ghardaia oasis city and its pyramid-shaped houses

7.    The Notre Dame d'Afrique and the main post office in Algiers

8.    The moor houses in Kasbah, a legendary neighborhood of Algiers

10.    The splendid landscapes of Kabila and the Aurés mountain

12.    The Moorish architecture of the Northern cities

1.    The safety situation is volatile, we had to get fresh information to consider the itinerary

2.    Hygiene and sanitation issues, water shortages here and there, using the public toilets is quite an outlandish experience

3.    Tourist infrastructure still underdeveloped, not much information is translated into English

4.    The tradition of violence is always in the air

5.    The long-distance transfers in the countryside are rather time-consuming

6.    Frequent identity controls, you must be very disciplined at military checkpoints

8.    We did not risk visiting Kasbah without a local

9.    Desert accommodations are shabby (though there has been some improvement lately)

10.    Few visitors, which results in some embarrassingly hard stares from some locals

No tourist infrastructure, and in the countryside it’s hard to find so much as a café or shop that inspires confidence
Souvenirs aren’t a thing, though you can find some local products here and there
Bathroom facilities leave a lot to be desired
Huge amounts of litter, which the locals seem to view as quite natural

We were there in January and it was very cold – we hadn’t expected this in Africa. There was even a big snowfall.
The locals don’t speak English, which made communication difficult (French and Arabic are the widely spoken languages)
Some people stares at us as though they’d never seen white tourists before
It’s a vast country, so you have to drive a lot between different sights
Getting a visa is fairly difficult process, and the officials at the other end don’t seem to have had a lot of practice
Some local buses are on the verge of disintegration
There’s an enormous difference between official and unofficial currency exchange, so it’s worth seeking out the unofficial places


Extraordinarily diverse landscapes – from the sea across the mountains to the desert
Good quality roads with regular upkeep and maintenance, which aid in quick travel
Fine architectural remains from the French colonial period
Many date palms, and the best dates are grown here (Gedlet Nour)

The ruins of Balcons de Ghoufi, an abandoned city in a superbly atmospheric canyon location
Many ruins from the Roman period – sometimes even whole ruined cities remain, covering large areas, and can still be visited today
We travelled as part of a tour group, so we had continual police protection, which was very reassuring
Very few tourists visit Algeria, so the locals were very curious and interested

The food is excellent, with a rich blend of spices

The country is very diverse and has some wonderful landscapes. You can go from the beach, across the high mountains, and right to the edge of the Sahara Desert. Like the landscape, the local economy is also very varied. Alger, for instance, is a big, expanding city, where they’re in the process of building the third largest mosque in the world.

Travelling deeper into the countryside, by contrast, you come across more and more ruined houses and trash. In addition, there’s a lot of construction work going on – Algeria’s population has quadrupled in the last forty years, and they all need somewhere to live. This means that development in the country is generally concerned with the necessities of life, and they’re less focused on the comfort of tourists. This makes it a wonderful destination for travelers looking to escape from mass tourism and find a unique, special destination.

For me the desert was the most interesting part, even if we only saw the very edge of that enormous expanse. Within a few kilometers the plans disappear, and the red, fertile earth gives way. In the space of a single day we saw snowy mountains and the barren sands of the desert.

One other surprise was the sheer number of Roman ruins in Algeria. We hadn’t expected so many, and in their scale and impressiveness they can compete with any of the more famous sites in Europe.

We didn’t meet many street vendors, but we were at least able to buy some ceramics. We got some very beautiful dishes at an extremely good price, and they’re ideal for cooking tagine or couscous. I’d

recommend exploring the local markets, and seeking out in particular the olives, baguettes and herbs. (2017) 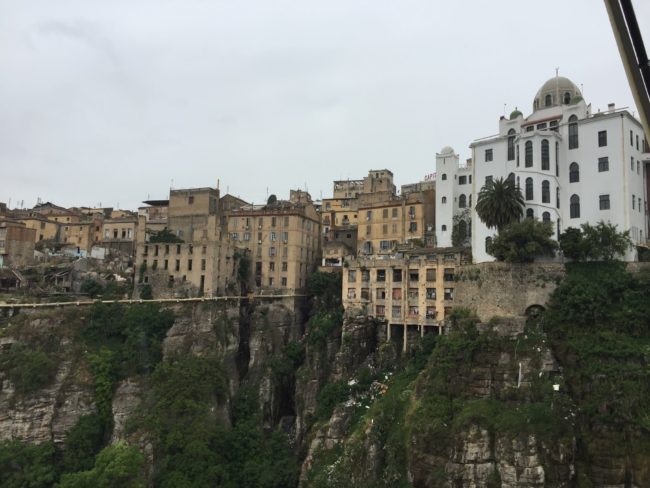 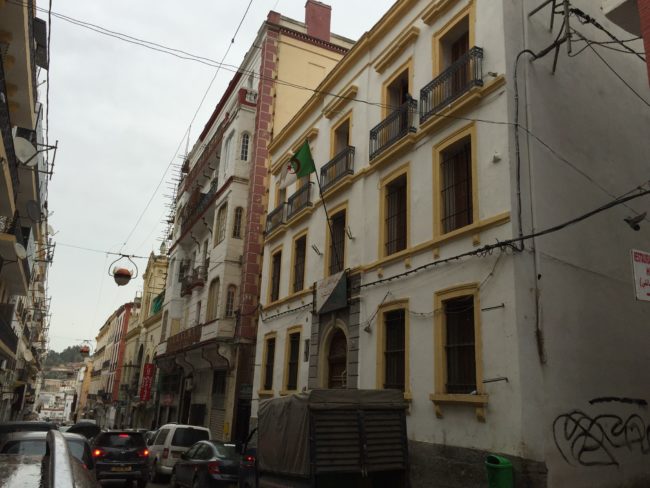 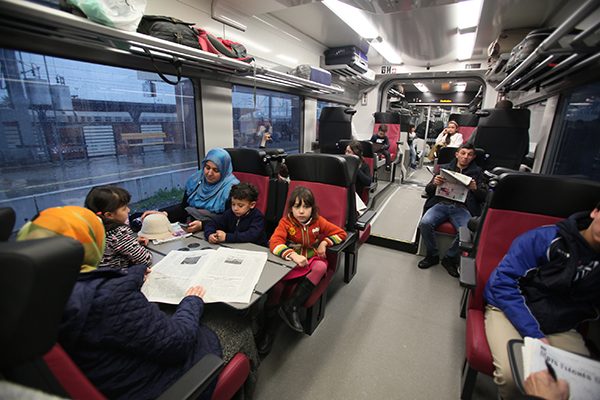 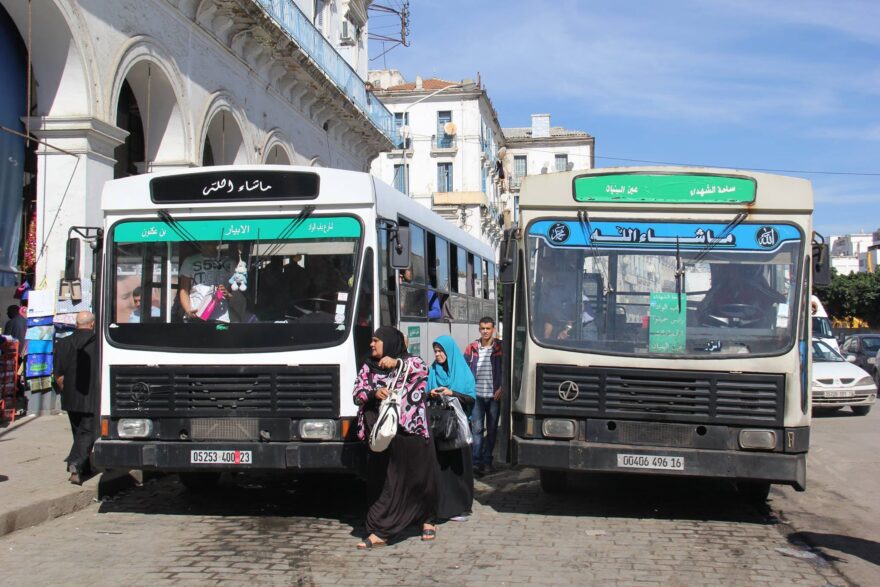 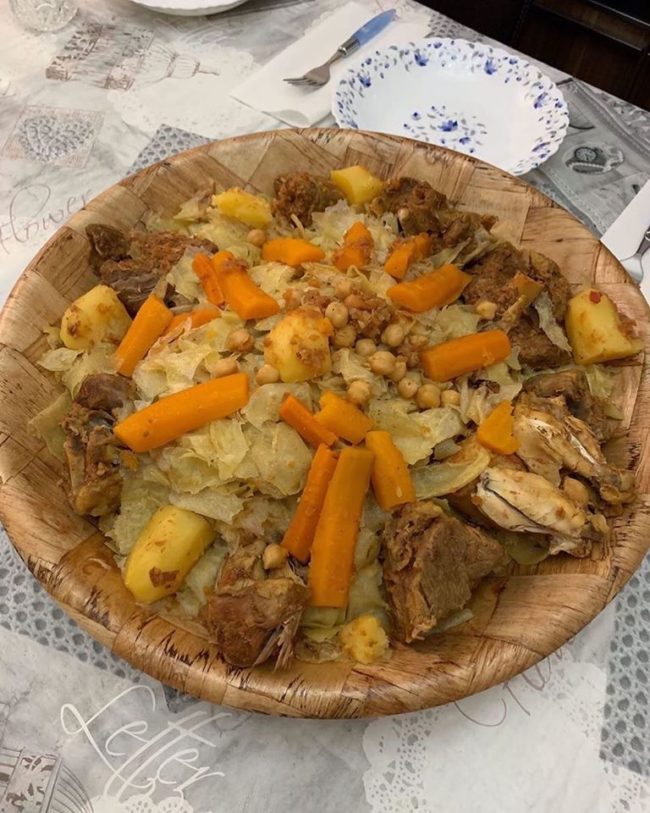 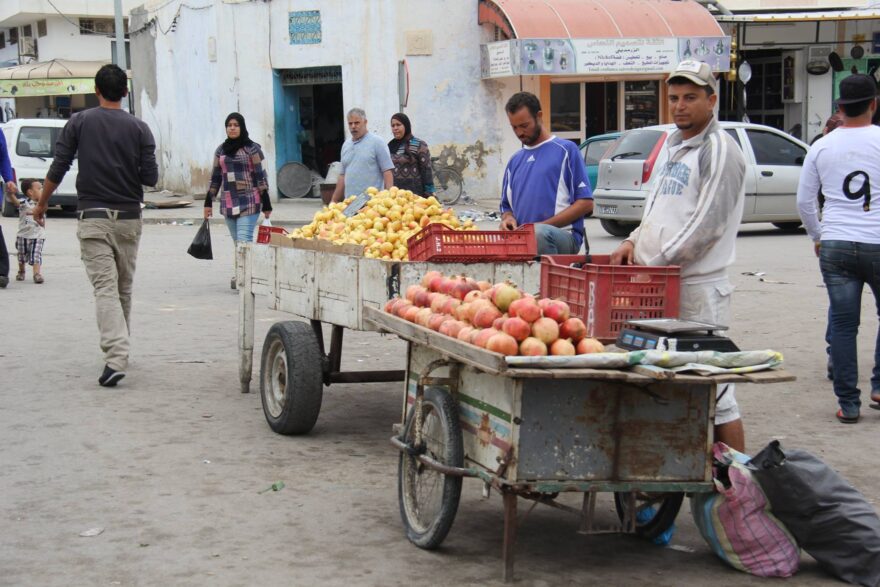 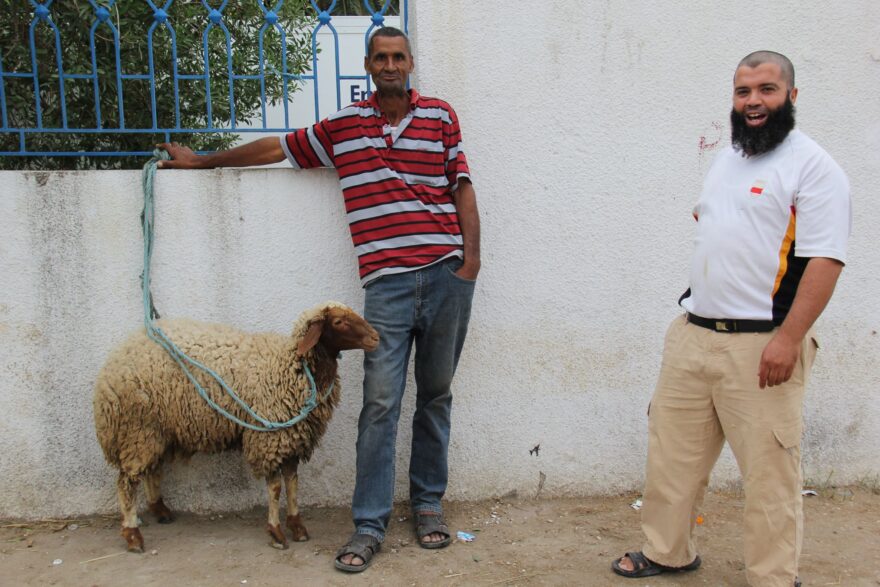 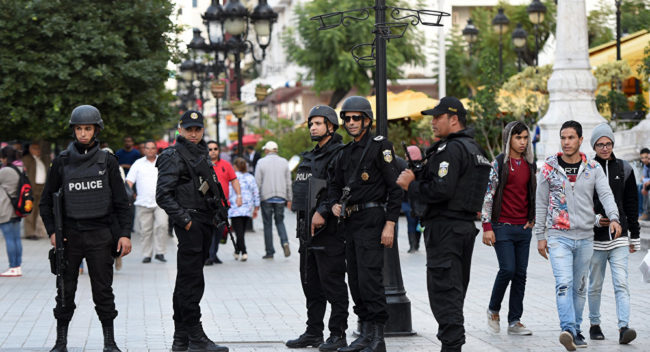 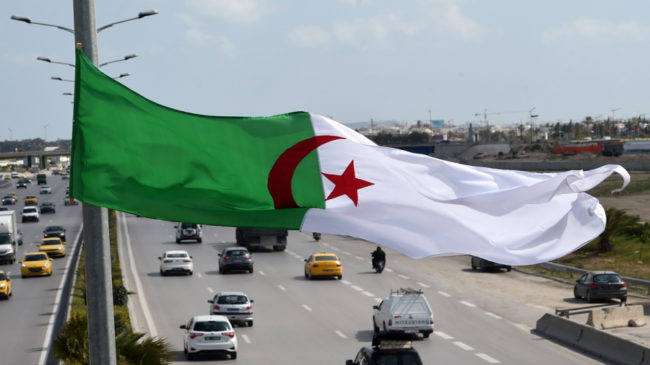 Algeria, an Arab country located is in the eastern part of North Africa, is one of the so-called Maghreb countries (the others being Libya, Mauritania, Morocco and Tunisia). Neighbors: Morocco (northwest), Tunisia (northeast), Libya (east), Mauritania, Mali, Niger (south). Algeria has a long coastline on the Mediterranean Sea.

Capital city: Algiers – 2.7 million – The city has a metro system.

Population (2020): 43.6 million - Algerians generally identify as being of combined Arab and Berber ancestry - Berbers are the indigenous inhabitants of the North African littoral – Most Berbers look like Europeans
Only 12% of Algeria’s land area is inhabited. The northern coastal area is home to 90% of the population.
Women in Algeria, unlike those in most other Muslim nations, make up 60% of the student population. They also have considerable prominence in society as 70% of Algeria’s lawyers and 60% of its judges are women. Algerian women make a larger contribution to household income than their male counterparts!

Language: The official languages are Arabic and Tamazight (Berber) -– About 25% of the population speaks Berber - French is widely spoken  - Many Algerians speak a colloquial Arabic that mixes an Algerian dialect of Arabic and French.

Religion: 98% Sunni Muslims – Islam is the official religion – it is forbidden to promote any other religion.

The national dish of Algeria is couscous, often served with lamb, chicken and/or cooked vegetables.

Safety: The bigger cities are pretty safe for tourists, thanks to the strong police presence, but the border areas are hazardous.

Optimal timing for a tourist visit: May-September, November-April for tours in the Sahara

Top tourist attractions:
The Old Town (Kasbah) of Algiers, Djémila and other ancient Roman cities, Beni Hammad Fort, M'zab Valley, city of Ghardaia, the oasis of Djanet and Tassili N’Ajjer
Useful to know:
Traditionally when you have a meal at an Algerian home, you should leave a little of your food on the plate at the end as it shows your host was able to amply feed you.

Algeria culturally is not profoundly connected to the Arab nations. Algeria is more blended to Moroccan, Turkish, Tunisian, and French culture. Some Greek, Italian, and Spanish influence are also traceable. The Arab aspect mainly exists by the Islamic doctrines, the language, the historical ties, slightly by genetics. 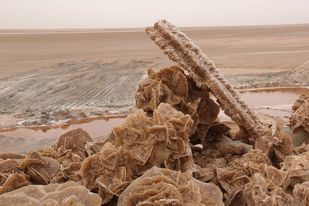 The people of Algeria are originally Amazigh (Berber). In 670 AD  Arabs immigrated to Northern Algeria, and while initially there were small tribal wars against the Arabs, finally a coexistence prevailed.

Algeria seems to decide it didn’t need revenue from tourism, nor agriculture. The economy was entirely geared towards oil, gas, and industries. As a consequence, few hotels were built if at all in places that could accommodate tourists. 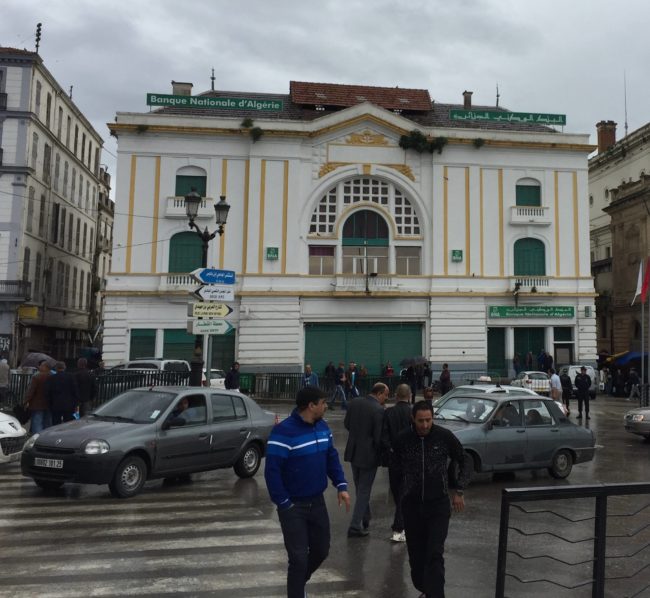 Most of the Algerians harbor negatíve feelings (racism) about Black people, about Africans South of Sahara. People (especially in the North) are only hospitable to light-skinned visitors.

Familial bonds (as in 'family') are so strong that real friendships scarcely exist: tittle-tattle, insincerity, and backbite are the norms. (It's not like Algerian families are perfect or anything; broken families are not uncommon.)

If you follow any religion other than Sunni Islam, you are an enemy, even thou traitor, though most Algerians are Muslims by birth, they hardly know or practice their religion. If you show tolerance towards others, you’d be disliked and may be called Atheist, Christian or whatever...

Algerians talk loudly, and foreigners often mistake it as quarreling. 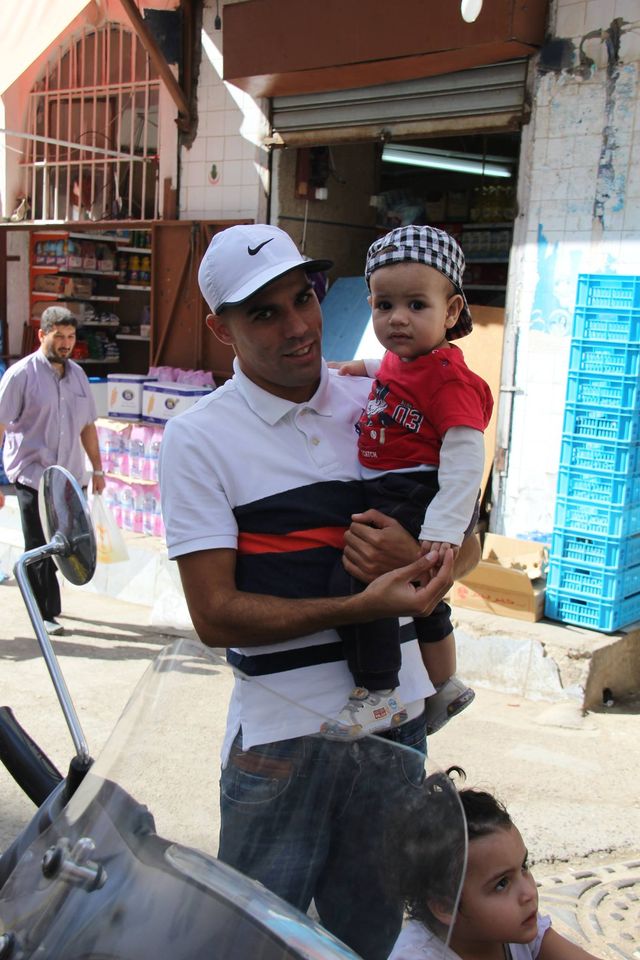 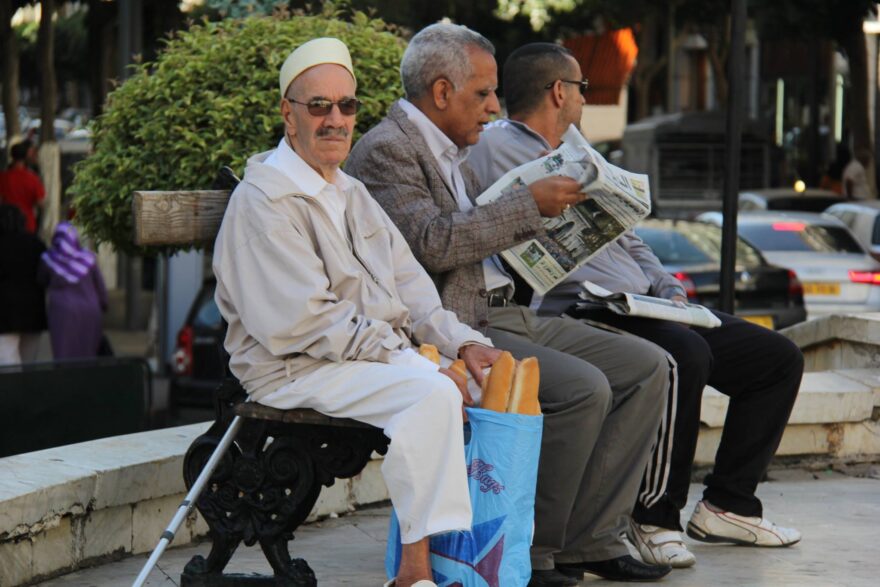 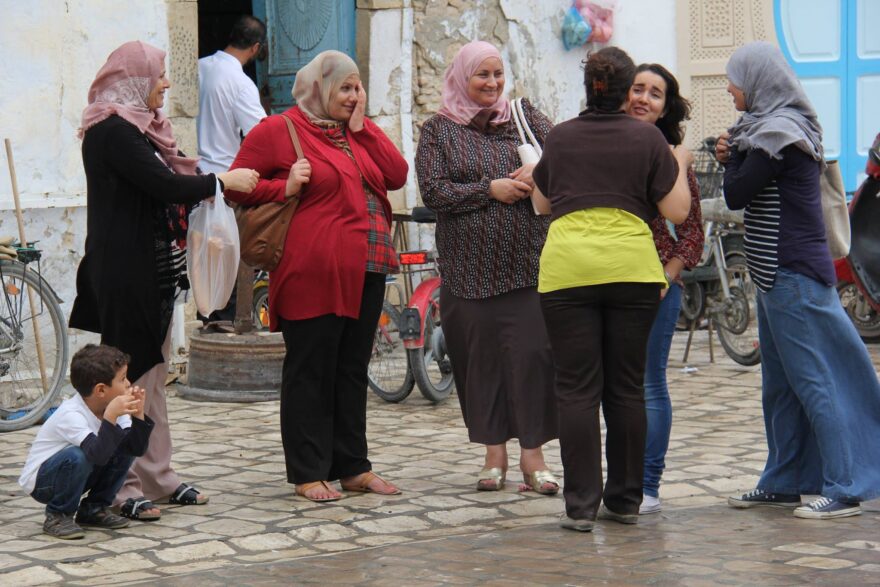 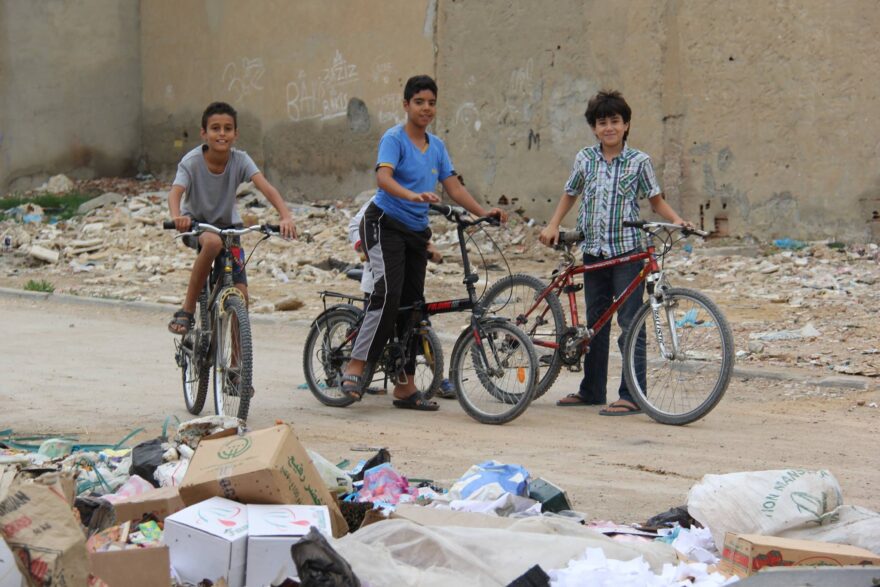 Algeria - kids guys who, of course, get used to the mess of the street environment - s.v. photo 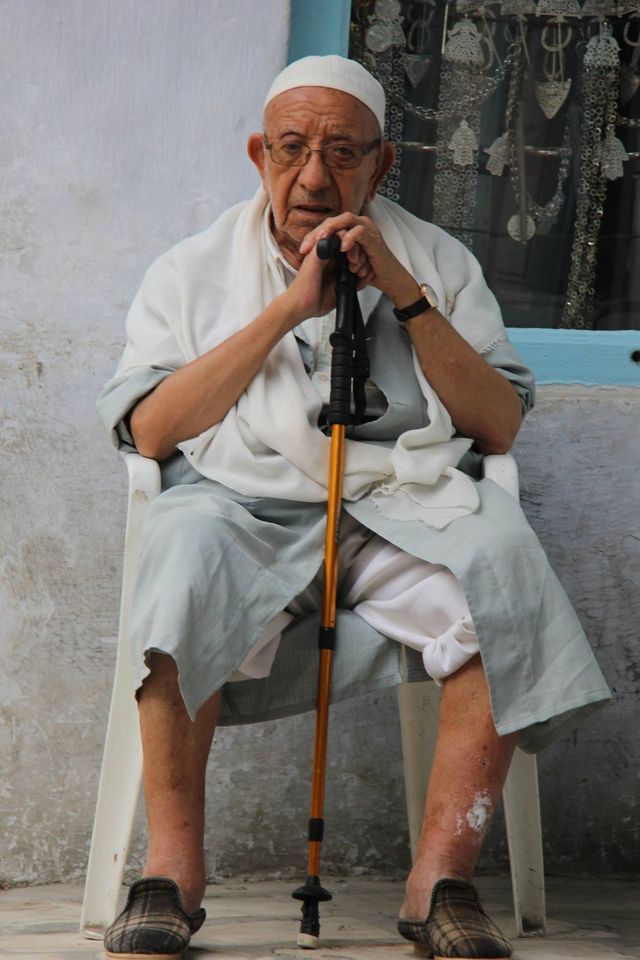 1. Many Algerians feel somewhat offended if a foreigner emphasizes Algeria being an Arab country. These locals prefer to hear that Algeria is a Maghreb country.

2. Don't admit that you are an atheist when asked about your religion. Thuswise you can avoid some inconvenient reactions.

3. Do not drink alcohol, even if you are offered it. Instead, ask for fruit juice or mineral water. This will be positively noticed.

4. Avoid all physical contact (pat on the shoulder, arm, etc.). That is only accepted in a very close friendly relationship. But it will take a long time for the Algerian to feel confident with a foreigner. 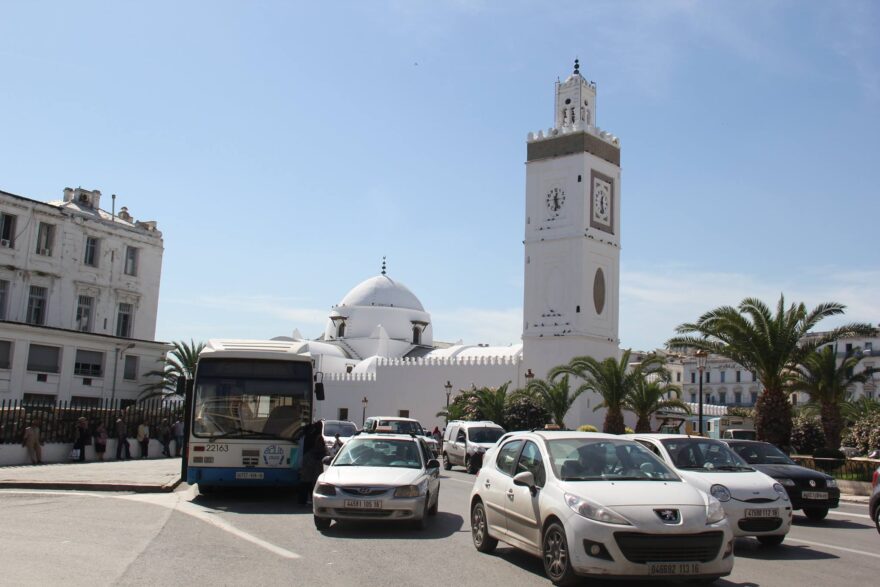 Algiers - traffic - in the background The Great Mosque (or Djama’a al-Kebir) - s.v. photo 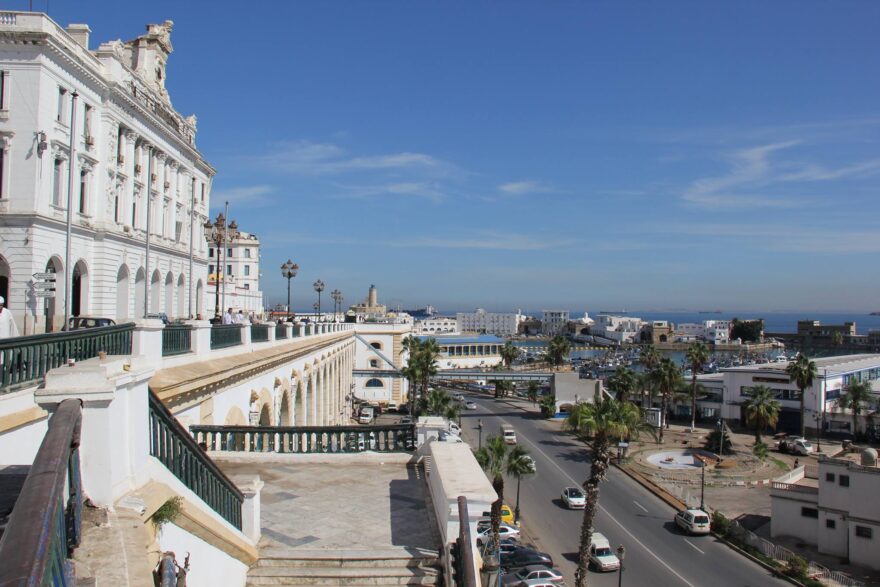 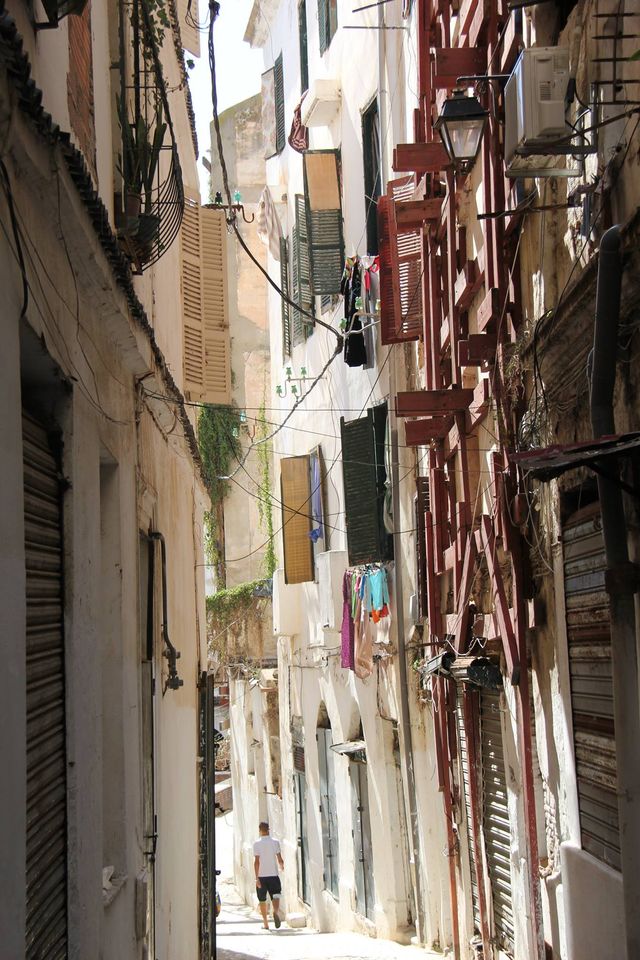 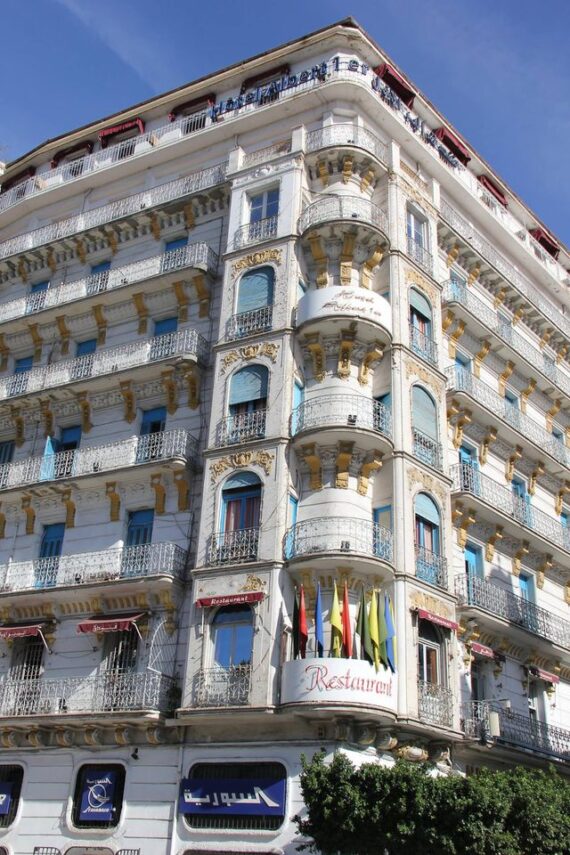 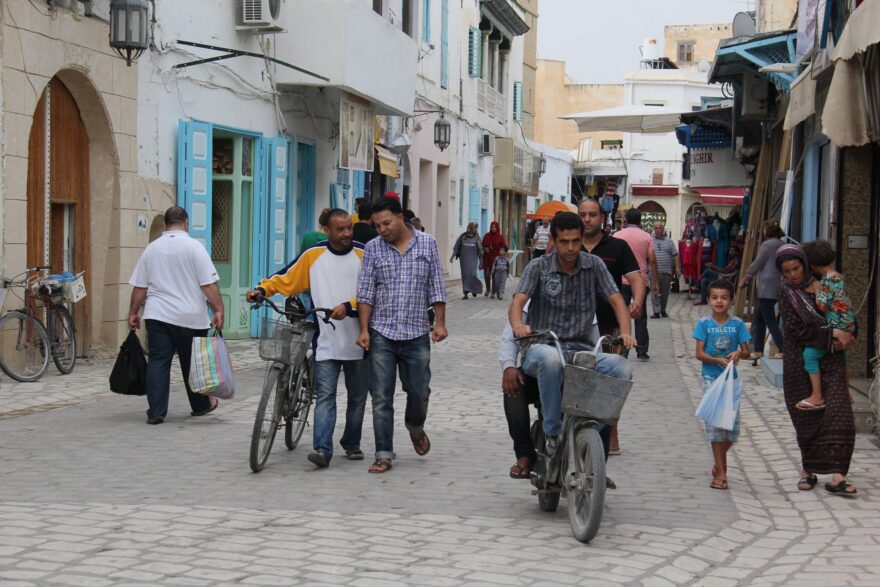 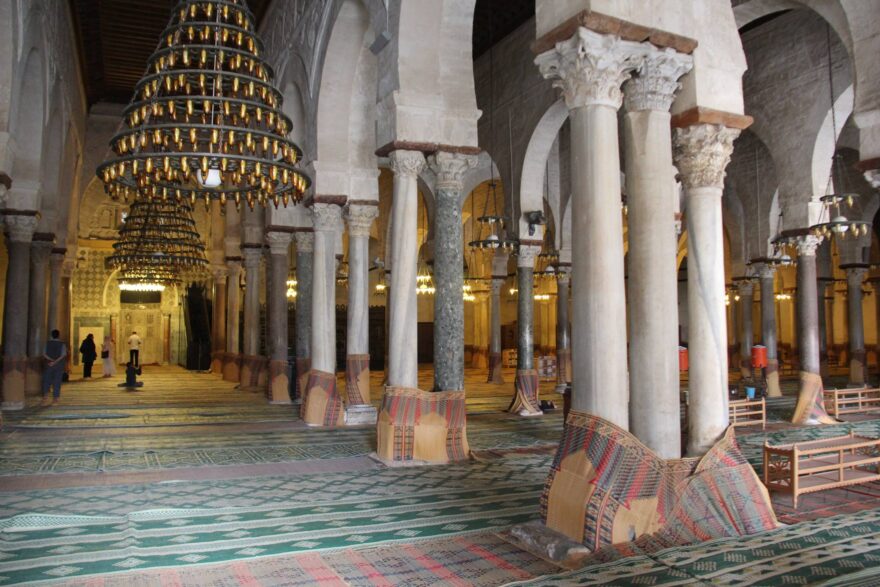 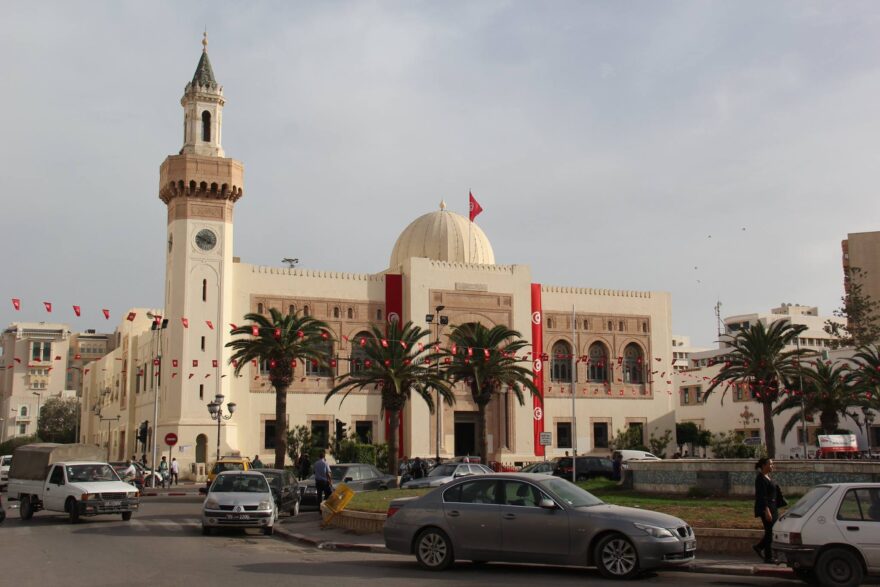