1. The Great Minaret of the Kalon in Bukhara

2. Locals readily struck up a conversation with us on the streets and squares, if a common language was available.

3. The stunning mosaics of the Shah-Zinda necropolis in Samarkand

4. The theatrical, flashy subway stations of Tashkent (or Toshkent) - our favorite: Mustakillik Maydoni (full of marble)

6. Relaxing in two alone in a 16th-century bath

7.The complex, photogenic view of the walls of Khiva with the surrounding desert

8. "golden smiles" of the Uzbek ladies with their golden teeth - a popular photography subject

1. Tashkent is interesting, but not particularly attractive

4. Concern about ticks during outdoor excursions

7. Endless queues with an anarchic crowd in the Tashkent international airport

9. In the bazaar, two vendors almost mobed us when we aimed our camera on them (in fact approximately only)

10. In the same bazaar, fruits were handed over with dirty hands

Uzbekistan - Uzbek lady with golden smile - Weird as it may seem for Westerners, the unibrow is a symbol of female beauty and purity in Uzbekistan - Elter photo 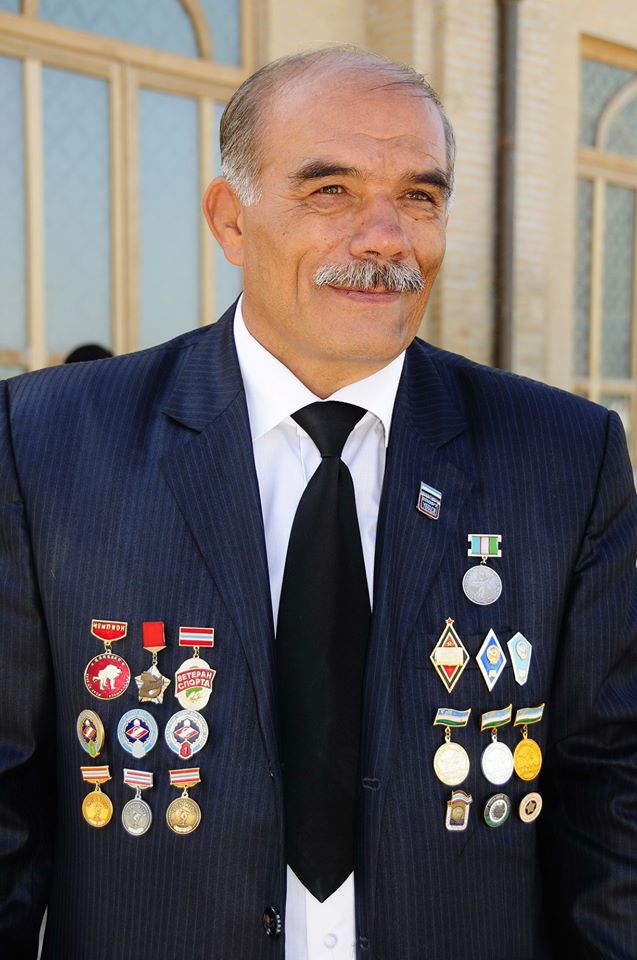 “At first glance, the Uzbeks seem friendlier than the Turkmens. Of course, making grand statements like this after just a few days in the country is pretty irresponsible, but I’m just describing how they struck me. I wouldn’t swear to it. Maybe it’s because the local dictator holds the reins of power just a little looser here. The borders of Uzbekistan are much more open, and not only do they, welcome foreign visitors, with open arms, but Uzbeks themselves are also free to move to Russia for work if they think they can make a better living there. For the past few years, it has even been open to outside investment – before long it will be a regular capitalist state!

The Uzbeks don’t differ much in appearance from other Turkic ethnic groups, and even follow the regional fashion of gold teeth, but to be they seemed much more cheerful and direct.
The tourist is, of course, a special kind of animal – you can stare at it, or try to sell at an outrageous price some item you’d never find a local buyer for nobody wears Cossack caps anymore, and the trade in Quran book holders isn’t what it used to be. Well, we were certainly exposed to a lot of curious looks, because though all the talk is about Uzbekistan becoming a popular destination, over the course of the day we saw only three tourist groups as we walked a circuit of Khiva’s walled old town. (phica, 2019)

“Local and intercity travel was well organized and comfortable. I really liked traveling on the high-speed train, and the local minibusses ordered to transport the group were also in good condition, clean, and comfortable.

The local guide took the group to quality restaurants serving local specialties, where you could have lunch for 7-10 US dollars per person. They were delicious!

Half-board dinners: Tasty food was served in upscale restaurants, and we were never disappointed (although the plov served for dinner in Samarkand was, according to some, too fatty, and with too little meat)

Sights: Fantastic! The itinerary was fine, though the old madrasa building in Tashkent was unfortunately omitted. It would have been interesting to see it, as it survived the 1966 earthquake. The earthquake memorial was just being renovated, so we missed that too.

Currency exchange: Well, there was a bit of a problem here. At the official currency exchange places, they are only willing to exchange currency in perfect condition (I would say mint condition, actually, preferably not folded).  They won’t accept older vintage or more tightly folded notes. They will not buy back their own currency (the som) for foreign denominations.

99% of their ATMs only accept VISA cards. During our trip we found only one ATM accepting Mastercard, which is hidden in the Ulugh Beg Madrasa on Registon Square in Samarkand.”

“Digestive problems. This is the result of a slightly different bacterial flora than in Europe. We didn't drink the tap water, and only used it for brushing our teeth, but maybe even that was daring on our part.

You have to be very careful and disciplined when buying fresh goods in the markets (fruit, dairy products), and most things are best avoided... Even fruit washed in local water can cause problems. Cakes and dried fruit are offered for tasting in the market, and this can also have consequences (especially if one's stomach is not in order).

Although the local tour guide was kind, courteous, and helpful, he did not really have the requisite professional knowledge. During our tour, he kept talking about many uninteresting things, and when it came to the main attractions, he presented what he had to say incompletely, in rather broken English.”

“It was a well-organized, memorable trip, with most comfortable, high-quality accommodation, delicious local food, and world-class scenery.

The helpful presence of Mr. László Mari and his outstanding knowledge provided significant added value during all stages of the journey.” (2018) 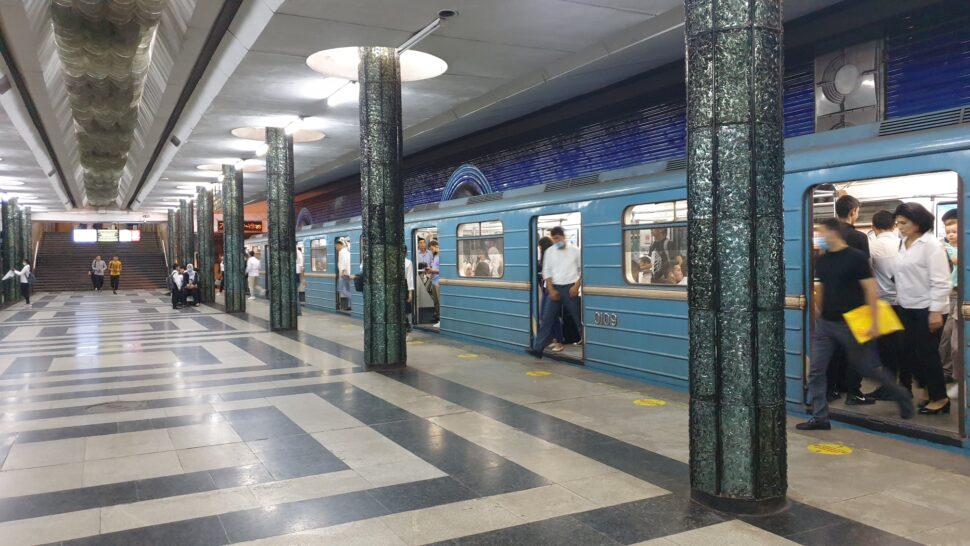 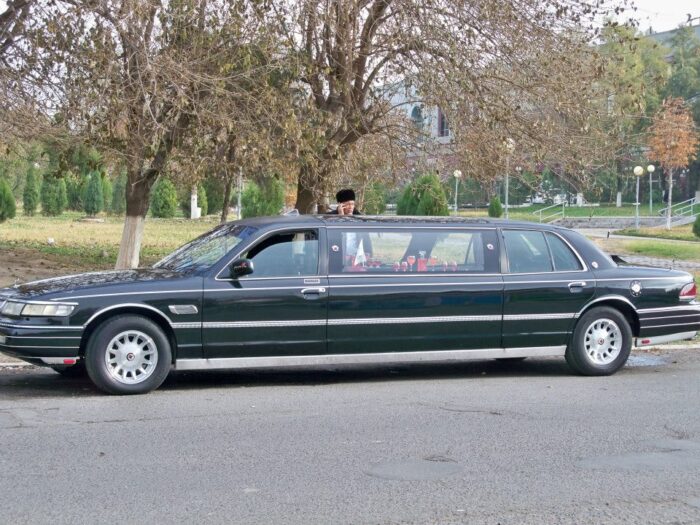 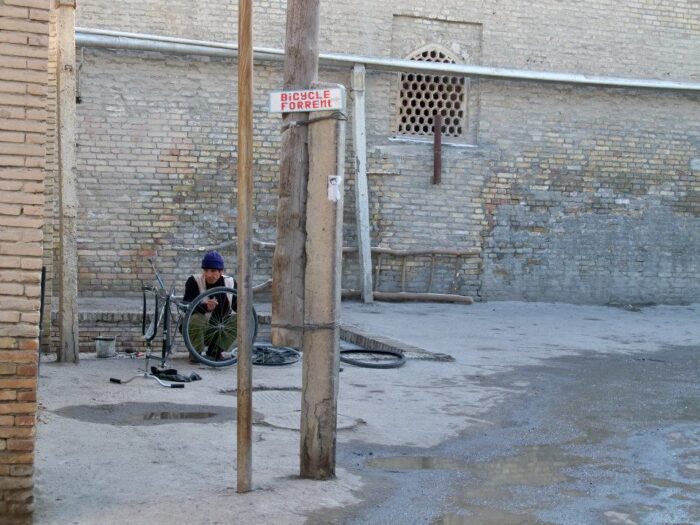 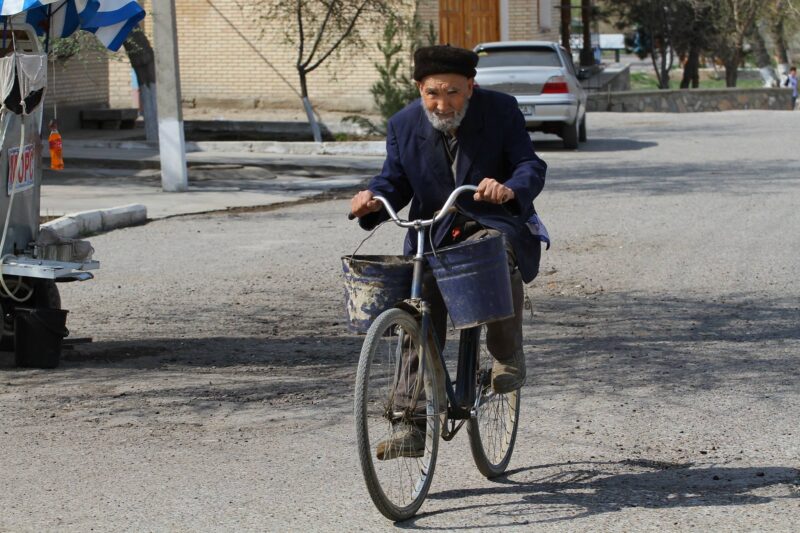 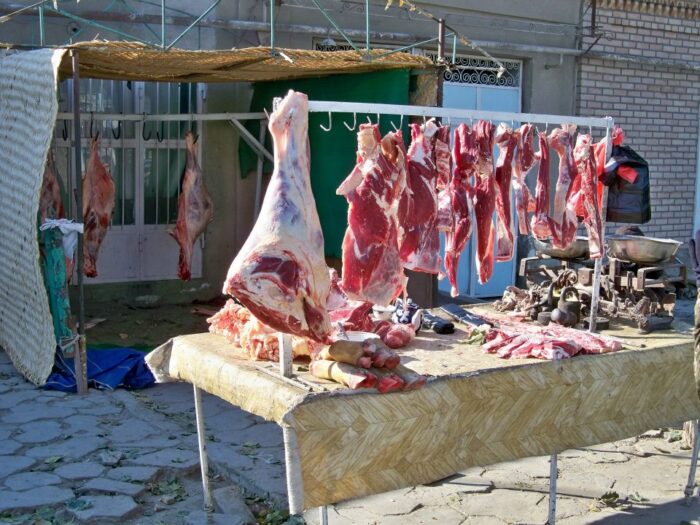 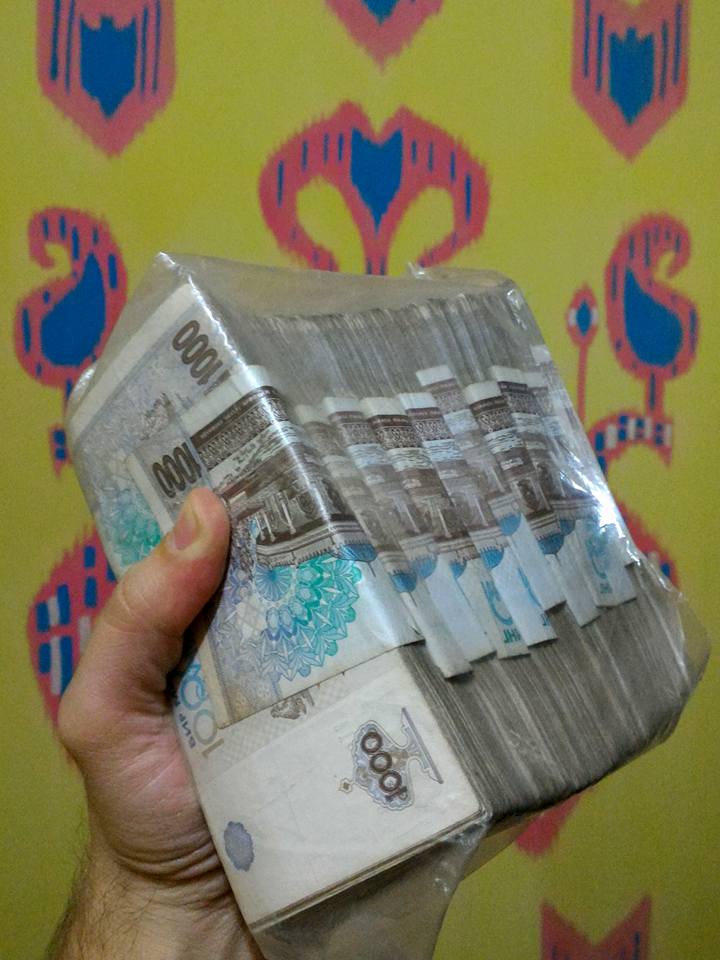 Uzbekistan - This is one million Uzbekistani soʻm - about 96 USD - n.e. photo

Uzbekistan - Bukhara - You can also buy such a special gift in Bukhara: Soviet officer uniform with lots of decorations - g.s. photo

"Around noon, we stopped at a roadside diner to eat and enjoyed the mutton shashlik with raw onions. Then, however, while looking for the WC, we made the mistake of looking into the kitchen. Well, all I’ll say is it certainly wouldn’t pass a health inspection back home. However, it works better than castor oil, because, despite precautions (50ml of 50% proof spirits before and after every meal), travelers must be on their feet here if they want to keep things together. Now it occurs to me that I shouldn’t have called it a WC because that means a water closet, and there was no water here. Only good taste keeps me from brushing off what I had to endure in that little room while I was doing my business.” (2017) 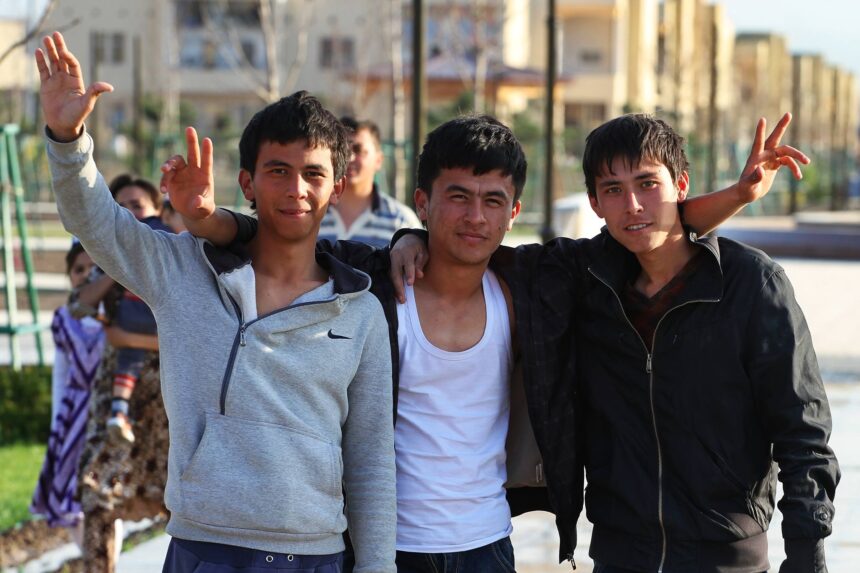 Language: Uzbek is the official language – About 80% of the locals speak some Russian.

Religion: 93% Sunni Muslim - Uzbekistan is trying to take advantage of its many ancient shrines to attract religious tourists to these holy places and become a sort of second Mecca. Uzbek women do not wear the veil but dress quite conservatively. The stricter rules of Islam are typically not applied in everyday life.


Political system: presidential constitutional republic, whereby the President is both head of state, and head of government – The country’s regime is authoritarian.

Safety: Uzbekistan is a safe tourist destination – no war, no riots, no mugging tourists

When to visit? May-June, September-November

“One first impression is that the peoples of Uzbekistan are friendlier than the Turkmens. Of course, saying such things after staying here for a day or two is quite irresponsible, but I feel I can confidently say I don’t think I’m wide of the mark. Maybe it's because the local Führer does not hold the reins of society quite so tightly. The borders are much more open, and not only are foreigners welcomed with open arms, but Uzbeks can also go to work in Russia if they want a better living. In fact, for a few years, it has been possible to start a business here, and in the end, even capitalism will have its place! The appearance of the Uzbek people is not much different from other Turkish ethnic groups – they follow the local mainstream even in the fashion for gold teeth, but they seem to be much more direct and cheerful. Of course, the tourist is something else entirely, something to be admired, and you can even overcharge him for some junk the locals don't buy anymore, because nobody here wears a Cossack fur cap anymore, and even the foldable Koran stand doesn't sell like it used to. We were certainly exposed to curious stares, because even though Uzbekistan is becoming a popular destination, during the day we saw only three groups of tourists on the streets of Khiva's walled old town.” (2017)

"People are kind and helpful, though not as direct as we are used to. Here too, gold teeth are very popular. We also noticed that people here age ‘faster’. Many young people around 20-25 look 30-35 or even older. We thought everyone was at least 10 years older than they actually were. Men wear European clothes, and women wear long tunics and trousers. Most of the population is Muslim, but this country is not like Iran. The people here wear their Islam more “lightly”, if I can put it like that, than elsewhere. In the city, both men and women wear European clothes.” (2015) 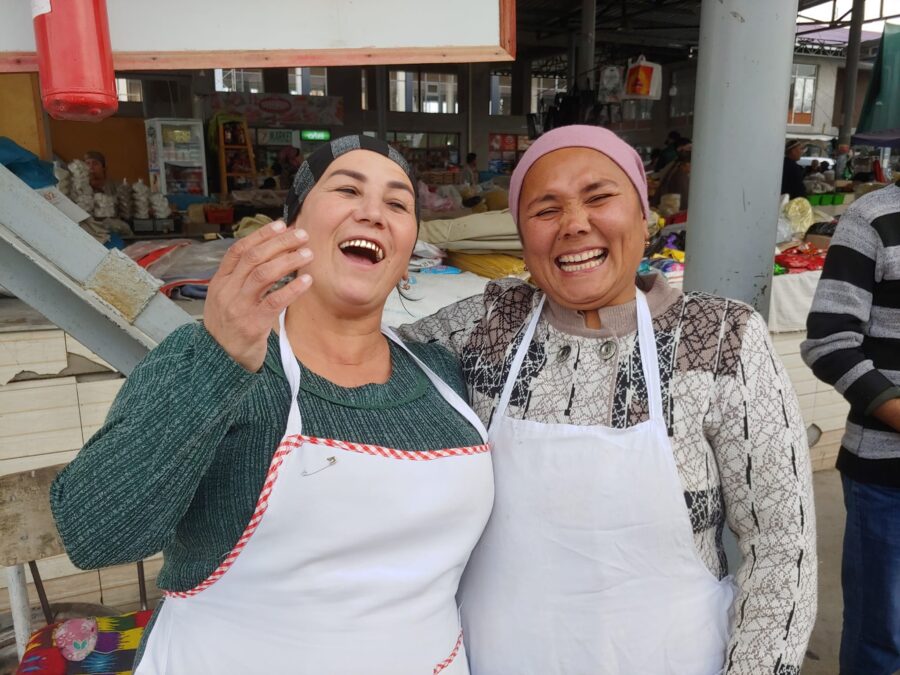 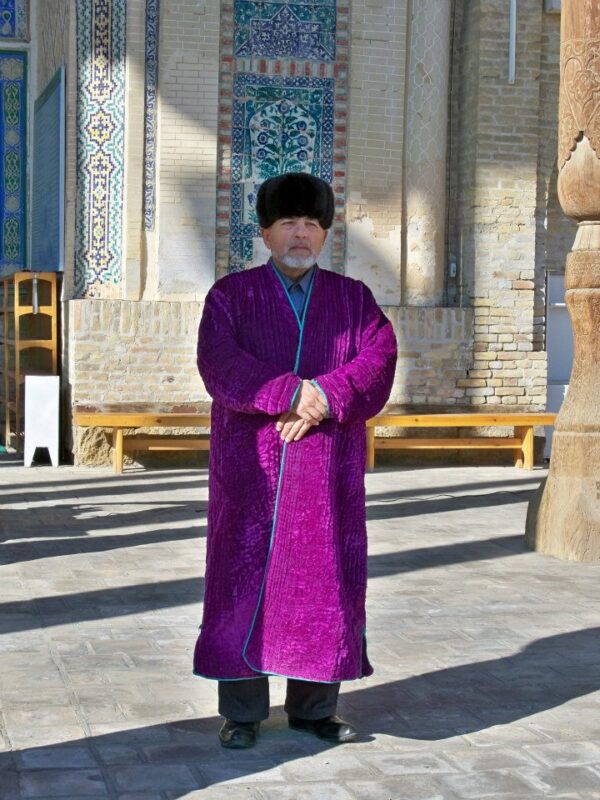 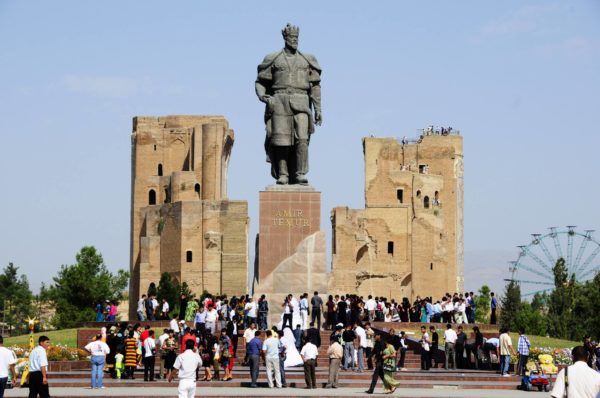