1. A range of contrasting landscapes, from the endless steppes in the west to the vast mountains in the south, and the Charyn Canyon to the south-east

2. The well-maintained roads through the Aksu-Jabagly nature reserve
3. Good public safety
4. If you speak some Russian, as I do, it will come in very handy here
5. The Park of 28 Panfilov Guardmen, and the fun of watching couples get their wedding photographs taken here
6. The museum of traditional musical instruments in Almati – surprisingly interesting
7. The central mosque in the city of Karaganda, and the KarLag museum documenting the horrors of the Soviet Gulag Archipelago
8. The Hazret Sultan Mosque and the Baiterek Tower in Astana
9. The new and absurdly inexpensive metro in Almaty

1. Sensing the assumption that as a European tourist you must be rich, and therefore ripe for fleecing in service and transportation
2. Poorly developed tourist infrastructure
3. The vast official bureaucracy, which can afflict tourists as well as locals
4. Difficult to manage with just English
5. Rip-off taxi drivers (at the airport too)
6. Getting cheated at a currency exchange office (from then on I changed money exclusively at banks, though I was frequently bombarded with offers on the street)
7. The smoked horsemeat sausages
8. The disgusting public toilets

“The Kazakhs superficially seem quite similar to the Mongols, but in fact they’re separatist Uzbeks who long ago took to the saddle and became equestrian nomads. Nowadays many of them speak Russian (at least in the north of the country, where large numbers of Russians and Ukrainians were settled in the 1950s under the ‘Virgin Soil’ program, to till the earth and grow grain on the Steppes). When one Kazakh is getting to know another, a typical question is: “What zhuz (tribe) do you belong to?

The Kazakhs who live in Astana are generally young, upwardly-mobile professionals who have moved there from elsewhere, and who might typically follow a lunch of horse or mutton steak with an afternoon of shopping, then a trip to the trendiest and most fashionable bars in some newly erected skyscraper, to dance to techno music until dawn. Some of them are ‘employed’ in their family business, but don’t actually go to the office, and instead occupy themselves spending vast sums of money. Those Kazakhs who work in shops/restaurants/museums are cheerful and friendly, but levels of service aren’t always quite at western levels, and to communicate it’s often necessary to resort to either Russian (if you speak it) or hand gestures.

There are a lot of Russians in the country, and it’s likely that President and national leader (a title he invented for himself) Nursultan Nazarbayev (who has ruled since 1989, after winning a series of elections which western observers have deemed neither free nor fair) was seeking to reduce their influence when he declared Astana the new capital and moved his government here in 1997. The process of switching the written Kazakh language from the Cyrillic script to the Latin script (due to be finalized in 2025) is likewise no accident, though signs are bilingual (KZ/RU) everywhere. The new capital has been under continual construction since 1997, and there are buildings by any number of famous architects. The result is a big, futuristic but as yet somewhat sterile urban core, often downright kitschy, occasionally beautiful, but always interesting, and a real hit on Instagram ;) What’s great is that aside from the oil industry, lighting technology companies are also doing top-quality work (most new buildings have some kind of flashing, multi-colored LED decoration). There are a lot of imposingly named new institutions (the Palace of Peace and Reconciliation, the Palace of Creativity, and the Khan Shatyr Entertainment Center, to give just a few examples).

The Khan Shatyr Entertainment Center is an event center, visual arts college and big shopping mall, but for all that it would be a stretch to say that cultural life has taken very deep roots yet here on the steppes.

Four nights would be more than enough to see Astana, but there are also some interesting excursions in the surrounding area.
For example:

1. A labor camp for "wives and children of men who were interned elsewhere as 'betrayers of the motherland'" (Akmol Labor Camp for Wives of Traitors of the Motherland, abbreviated as ALZhIR).

2. Burabay National Park, two and a half or three hours from Astana, is a landscape of woods, lakes and mountains.
3. Flamingos and other birds in the Korgalzhyn State Nature Reserve
4. Easy to take an onward flight in any direction, e.g. to Almaty in the south, or to other Central Asian capitals

To enter the country, you must fill out a short questionnaire, then you’re photographed at the passport check and the immigration official asks you a few questions, but it’s all fairly straightforward. There are no queues at Astana airport, and flights are generally well below capacity. For transfer to the city I’d recommend either a taxi or an Uber; the latter is particularly good value, as a journey downtown will only set you back a couple of dollars, but in fact the taxi would probably only be double that at most. The most exclusive restaurants in the city only charge what you’d pay in a mid-range establishment in Prague or Budapest. Gas costs about forty cents a liter, and a room in a four-star hotel is between sixty and ninety euros a night. Central Asian food is good – they don’t just eat horse and sheep meat – and in fact you can find almost any type of food in Astana, from McDonalds to Russian and Georgian cuisine, and everything in between. Even a master Italian baker wouldn’t be able to improve on the pistachio cookies in the Sato restaurant. Hotels are clean, and the four- and five-star establishments also have pools and saunas. The St. Regis in Astana and the Rixos Borovoe in the Burabay National Park are two particularly attractive examples.” (2019, Bono)

We don’t recommend tourists to sit behind the wheel in Kazakhstan, not even the experienced drivers.
Secondary roads are in a catastrophic state. Because of the potholes, bumps, driving at night is risky even on primary roads.

Avalanches and landslides are a danger on mountain roads. 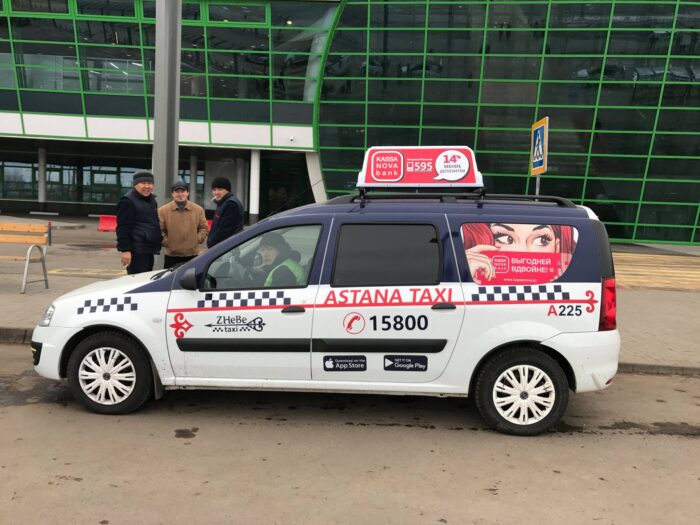 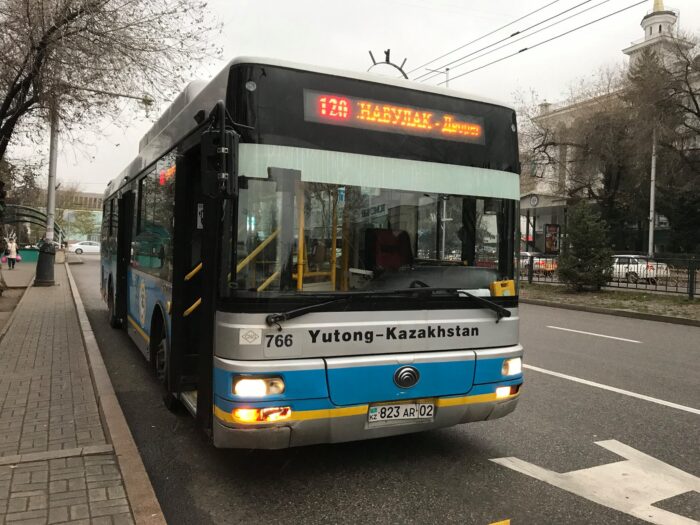 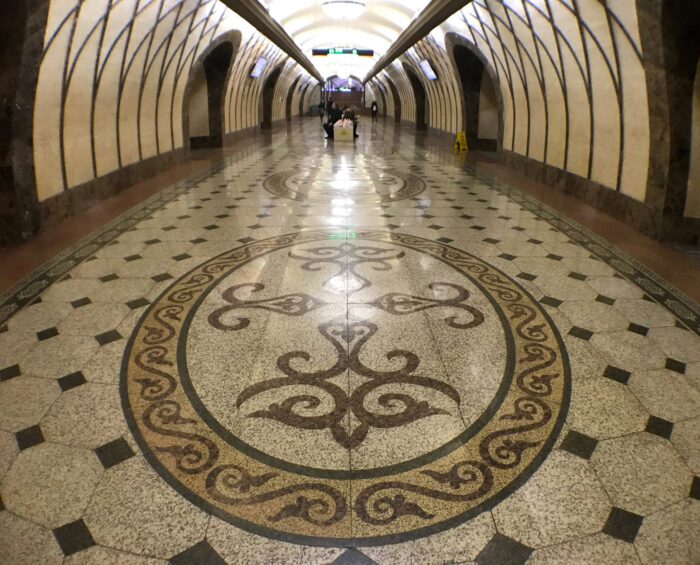 “Even the pickiest eaters won’t starve in Kazakhstan. True, there are a few oddities in Kazakh cuisine, but on the whole, it isn’t particularly bizarre. Those with a more adventurous attitude can try horsemeat – I admit I was skeptical at first, but it turns out to be perfectly edible, and even delicious when cooked well – but those who prefer to stick to what they know will find plenty to their liking. What is more interesting is the range of options available in bakeries. There are sausage rolls, chicken drumsticks baked in buns, and they love to stuff the pastry with fried cabbage and mashed potato.” (2018) 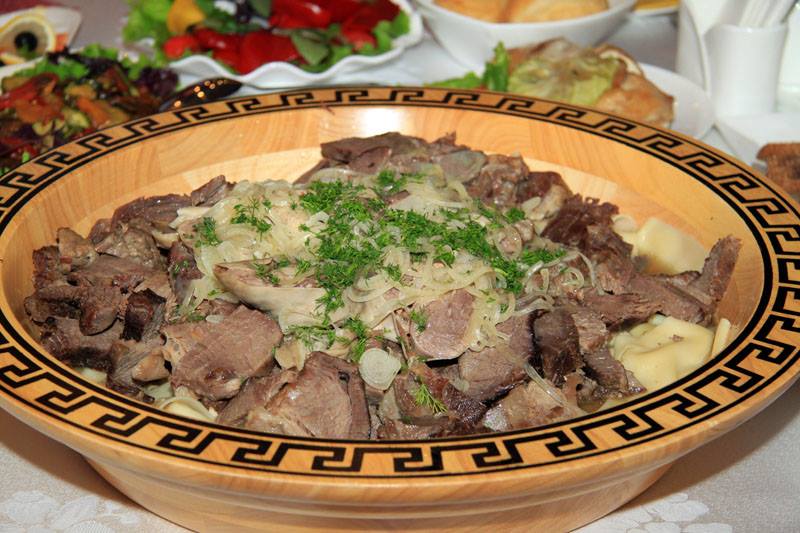 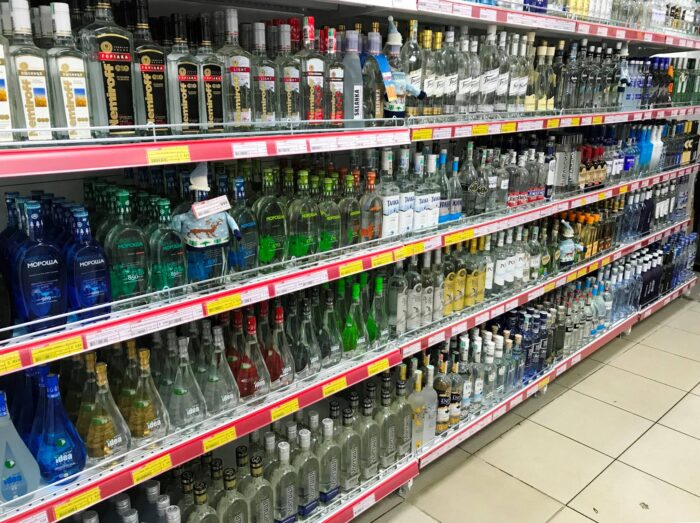 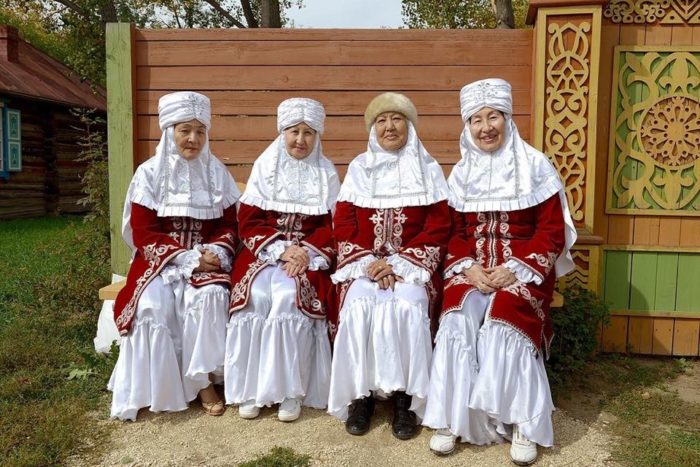 Don leave any valuables in the visible areas of your parked cars.

Kazakhstan - police - he looks at the photographer suspiciously 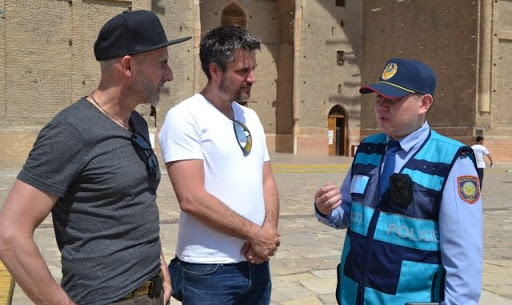 Medicines are available in a wide range, even without a prescription.

In big cities, tap water is usually of good quality; still, we recommend that you consume bottled mineral water. 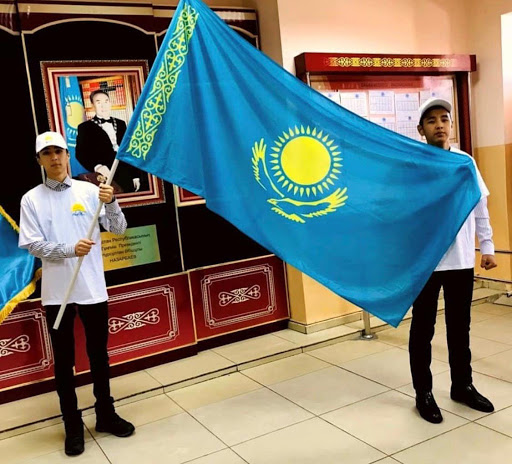 Kazakhstan has a coast on the Caspian Sea (west), which is actually an inland sea (or a saltwater lake, according to some). This means that Kazakhstan can in fact be considered the world’s largest landlocked country.

47% of the population is Muslim and about 44% Russian Orthodox.

Official languages: Kazakhstan is a bilingual nation where both Kazakh and Russian are widely spoken. Kazakhstan's Constitution gives Kazakh an official status and stipulates that the President of Kazakhstan should be able to speak Kazakh.

Kazakh is a member of the Kipchak branch of the Turkic language family (Uzbek, Kazakh, Kyrgyz, Turkmen).

The country is strategically located between the large and fast-growing markets of China and South Asia and those of Russia and Western Europe. It has a growing middle class, fast economic growth and an abundance of natural resources (including oil & gas), whose profits have been used, in part, to build the futuristic city of Astana/Nur-Sultan. However, it is also considered one of the world’s kleptocratic autocracies and, as such, post-Soviet life has been far from a democratic dream.

Public safety is excellent, with no dangerous regions.

Prominent tourist attractions: Almaty, the lakes and steppes of Saryaka (north of the country), Singing Dune of Altyn Emel National Park, Charyn Canyon, the Mausoleum of Arystan-bab, one of the Muslim shrines of Central Asia and a pilgrimage site, Western Tien-Shan

The landscapes are as stunning as they are diverse. Charyn Canyon looks like the Grand Canyon. Lake Issyk is a mountain lake paradise. The Tamgaly Gorge has inspired human creativity for thousands of years. Whatever kind of outdoor adventure or Eden you are craving, Kazakhstan offers up a taste.

Basically every car is a taxi. There are not many official taxis and even those do not have fixed prices. You just wave on the street, a car stops, you discuss the destination and price and hop on. No calls, no waiting, no hustle. Perfect. But it’s easier if you can speak some Russian. 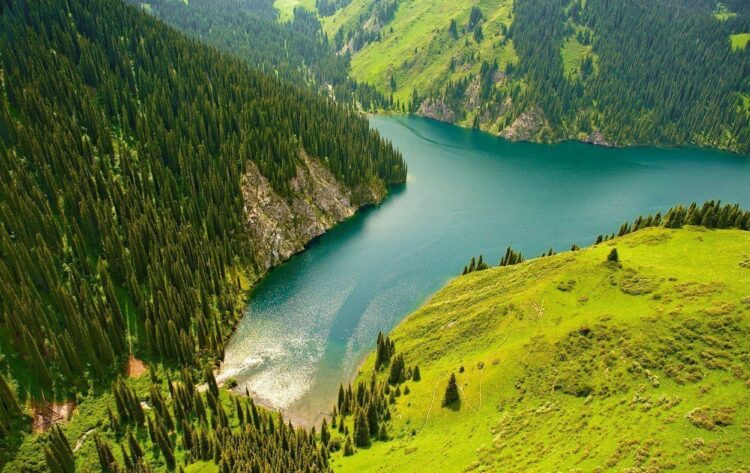 Kazakhstan is the ninth largest country globally, which is why the weather conditions are different in different parts of the country. Its climate is predominantly continental, with uneven distribution of precipitation. The average temperature in January is -4 ° C to -19 ° C, and in July, it is between +19 and +26 ° C. Almost the entire country is characterized by strong winds, which in some places exceed speeds of 140 km/h.

“If you’re visiting Kazakhstan in order to really explore the country, you’d better be prepared for some extreme weather – especially if you’re visiting the east in the colder months! This is no joke: it’s strongly recommended that anyone visiting the country in winter should come with, in addition to the usual warm clothes, a good winter coat, and padded boots.

The climate can vary wildly from one region of the country to another. While Astana might be in the grip of a snowstorm, and you’ll have to shiver through the cold in a warm winter coat, a few hundred kilometers south, in Almaty, you might already be able to enjoy the spring sunshine in nothing but a decent pullover.” 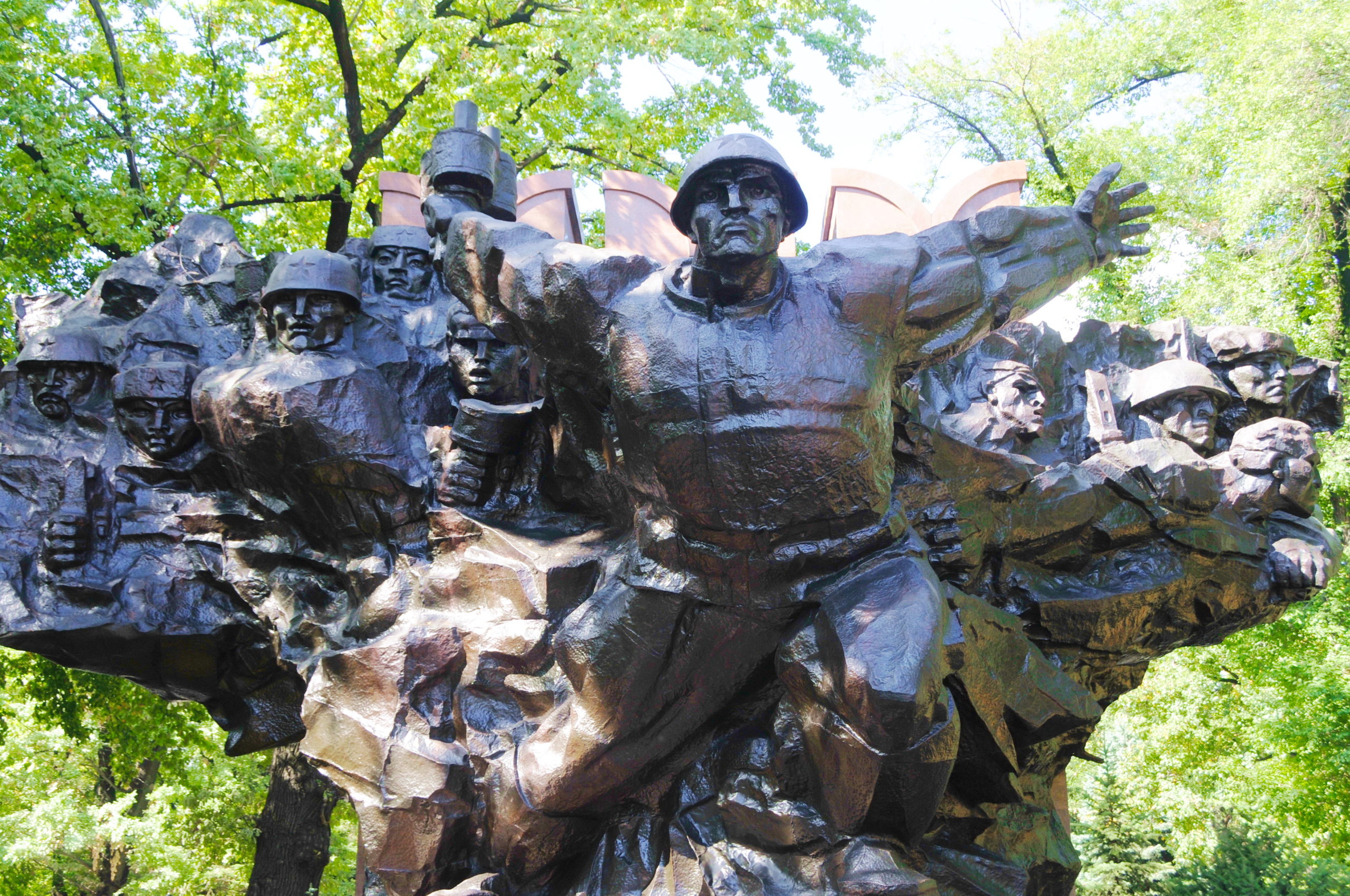 Kazakhstan is nothing like it appears in the movie Borat! It bears no resemblance to the real Kazakhstan and is much wealthier and richer in culture than depicted in the film. (2019)

“The locals say that tribal identities are still very much alive here – not only will Kazakhs not countenance marriage with a Russian or an Uzbek, but they’ll also pay close attention to which tribe their prospective spouse hails from. Even from a kilometer upwind they can tell a Kazakh from an Uzbek, and despite the seventy years of Soviet rule, the thousand or more years of Muslim tradition are much more strongly evident. Still, there’s no trace of fundamentalism or Islamic extremism. 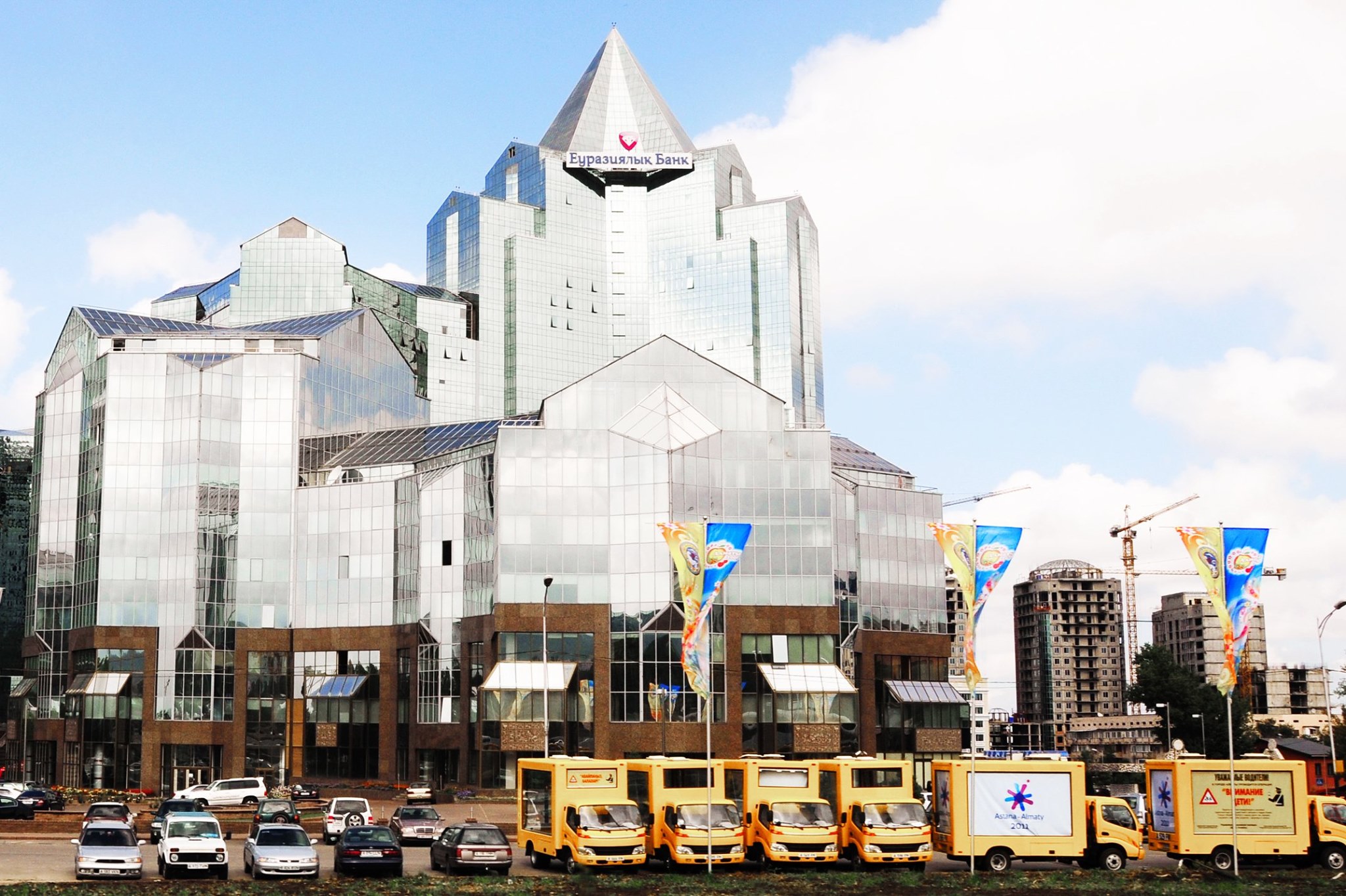 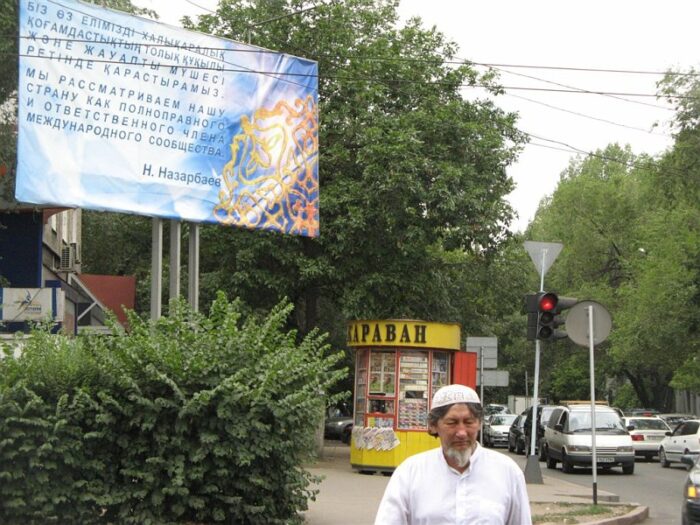 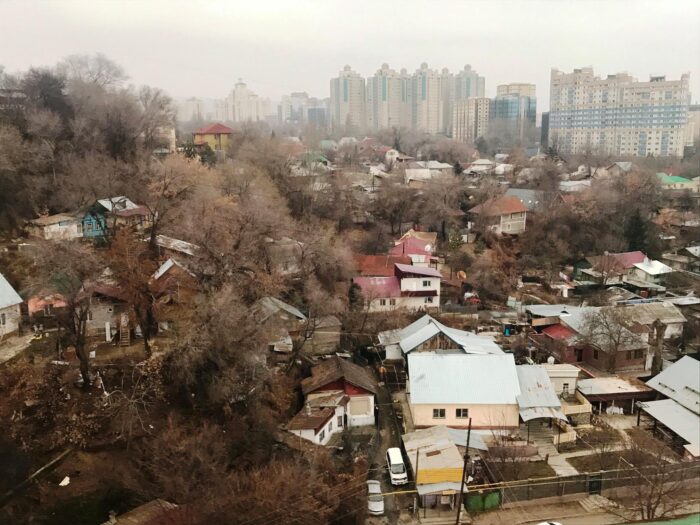 Kazakhstan - lady with her iPhone - h.i. 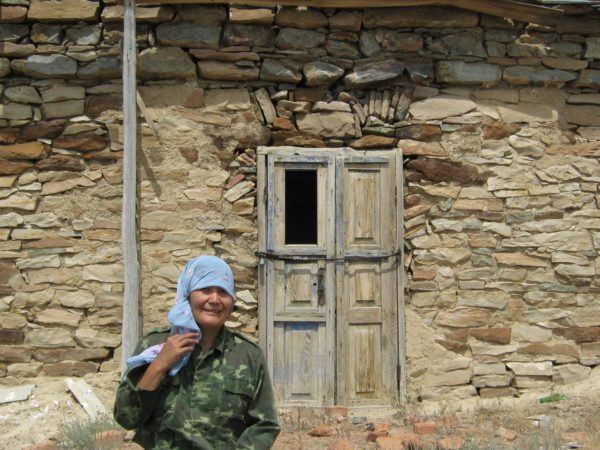 1. When greeting each other with a local person, extend both hands.

Kazakhs claim that the apple spread to the world from the territory of Kazakhstan. 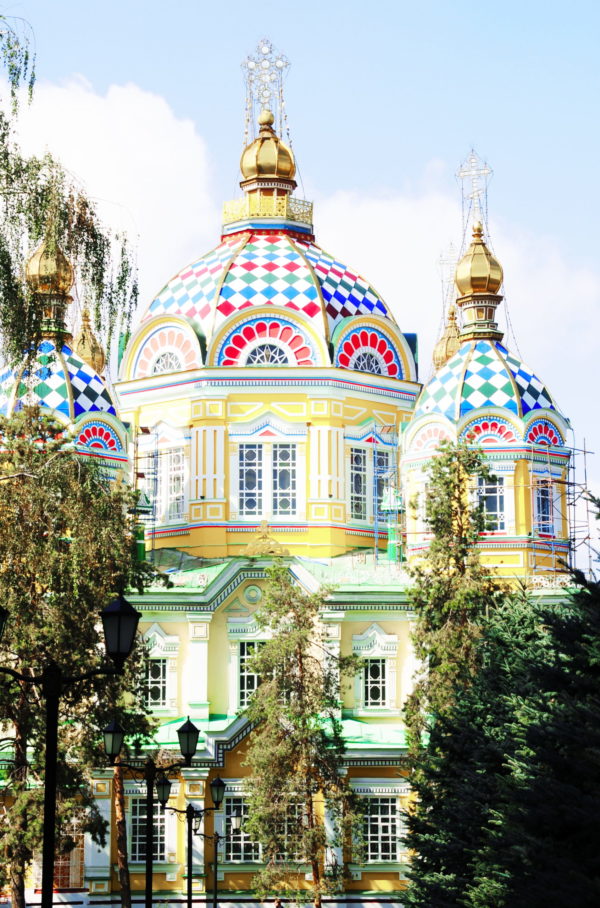 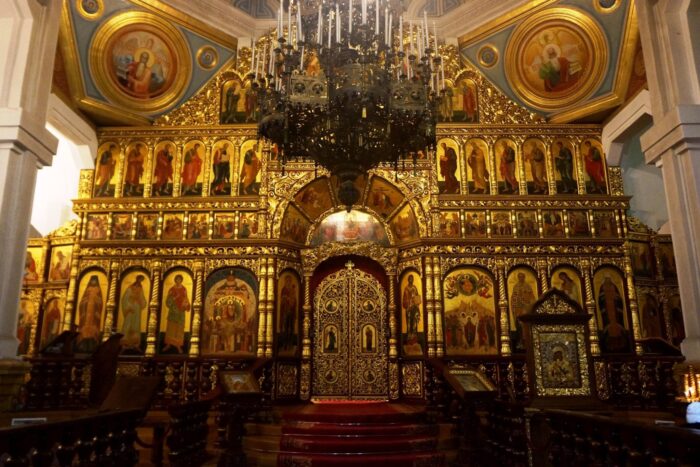 Nur-Sultan is the second coldest capital in the world (after the Mongol capital, Ulaanbaatar).  Isim, the city's river, could freeze as early as November. 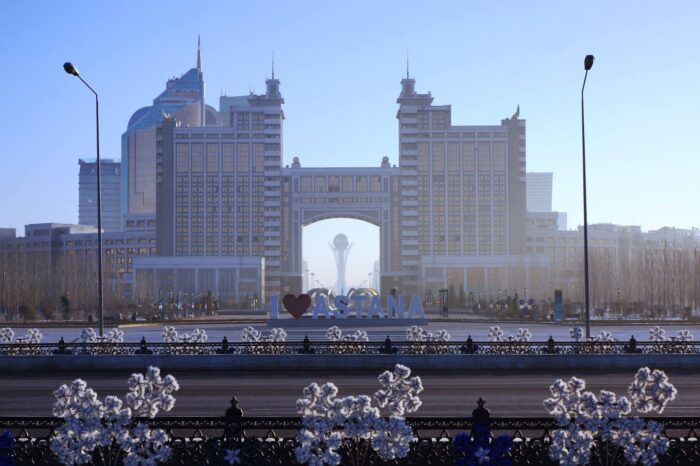 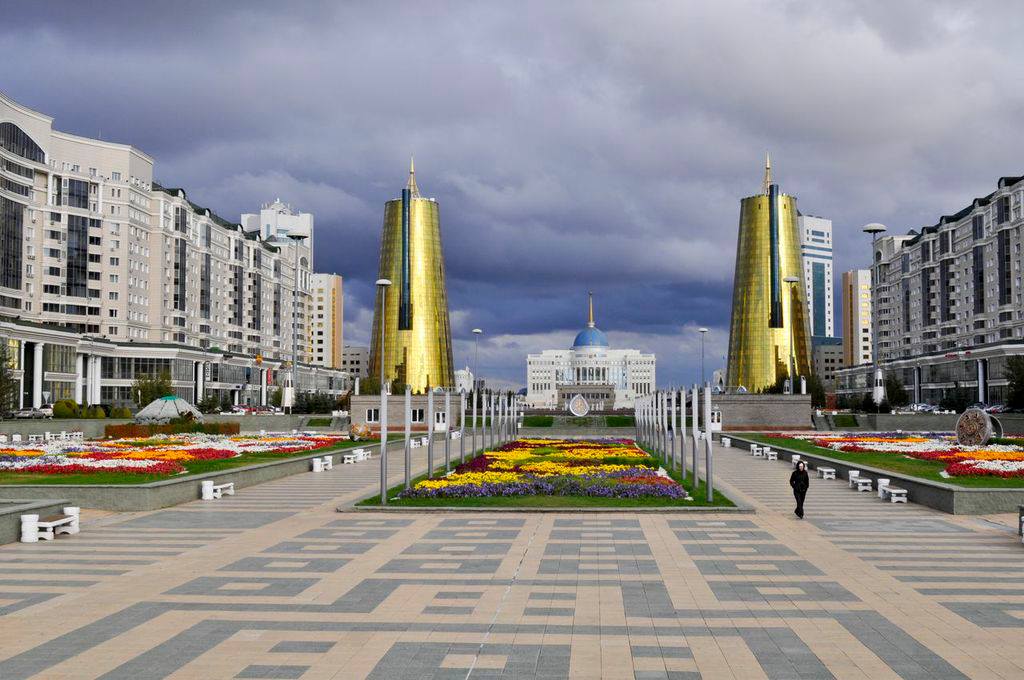 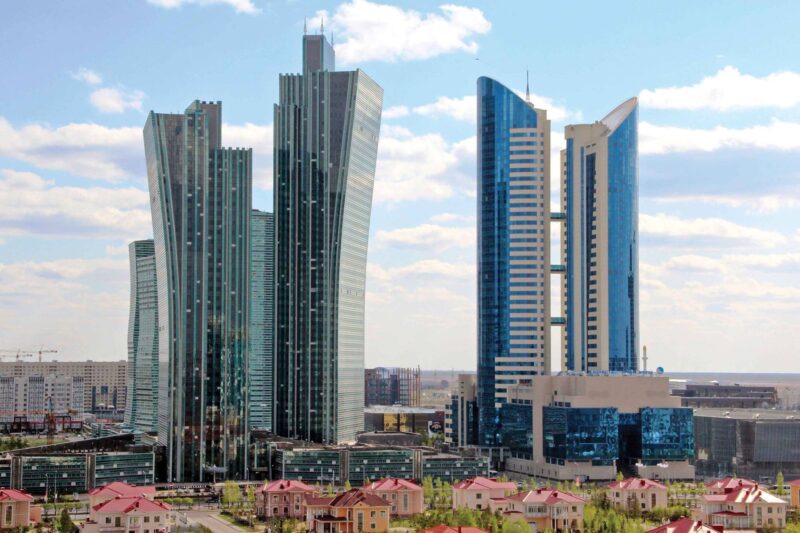 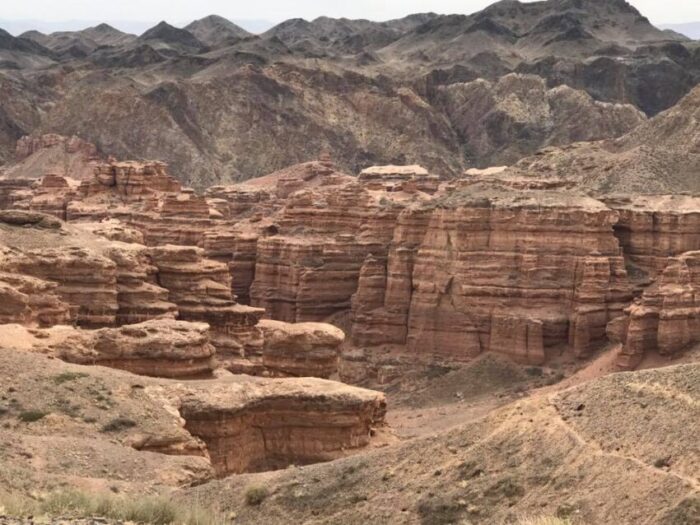 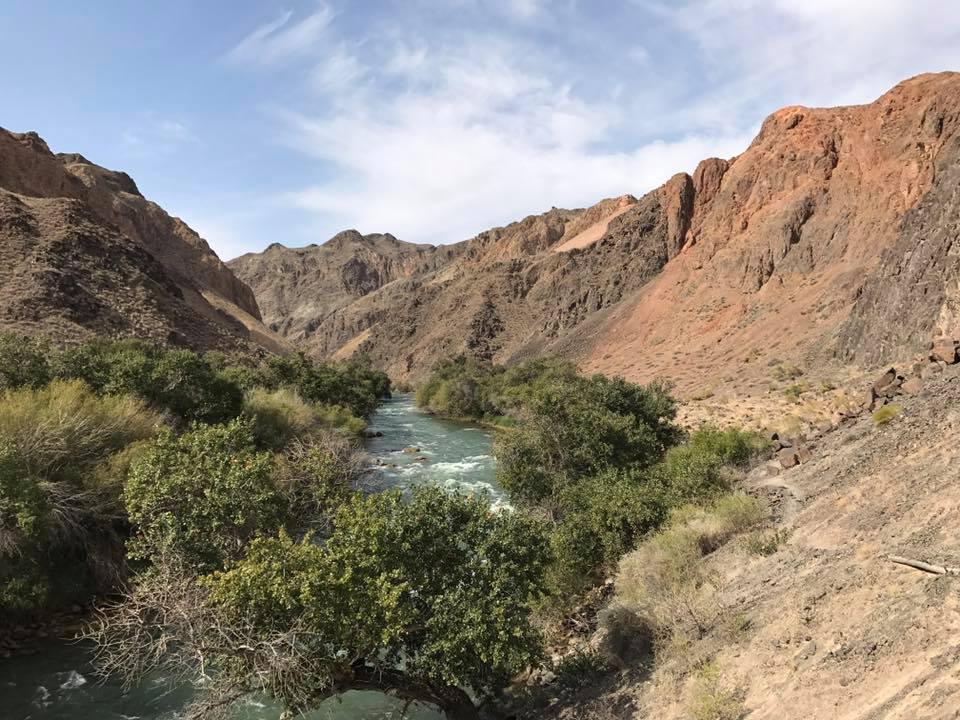