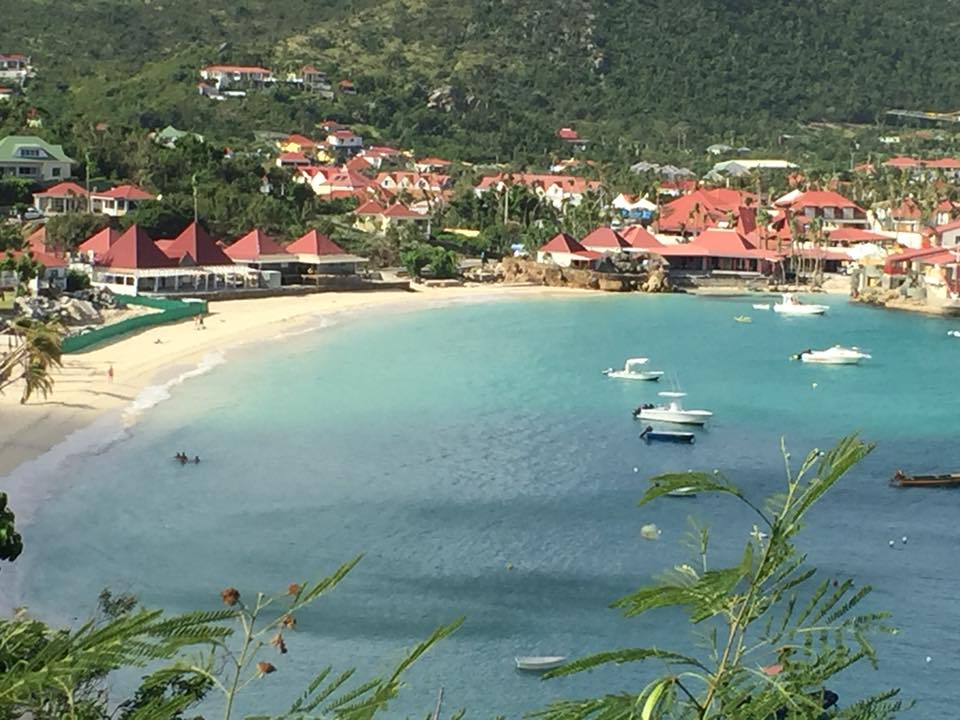 3. The quality of services, restaurants, bars are definitely over the Caribbean average

4. Enjoy being on an exclusive beach destination, see how the wealthy people enjoy hedonism

5. The safety is perfect

6. The blessed impact of the French gastronomy - a piece of France in tropical robe

1. Most of the beaches do not offer any services (toilet, shower) and coastal restaurants. unwelcome people trying to use a loo

3. Many of the French locals working in services are as repulsive as their lookalikes in the motherland.

4. Taxi drivers ask outrageous price (about 160 USD) for driving visitors around an island that has 39 kilometers of public road only

5. The island is more expensive than Paris - the alcohols are particularly costly

6. The way the locals and the long-stay vacationers look down on the ,  cheap" cruise passengers

7. Mosquito-repellents are badly needed in the evenings on the restaurant terraces.

8. The beaches' perfectness is only hazarded here and there by those large brown seaweeds that float in island-like masses on the surface of the sea. 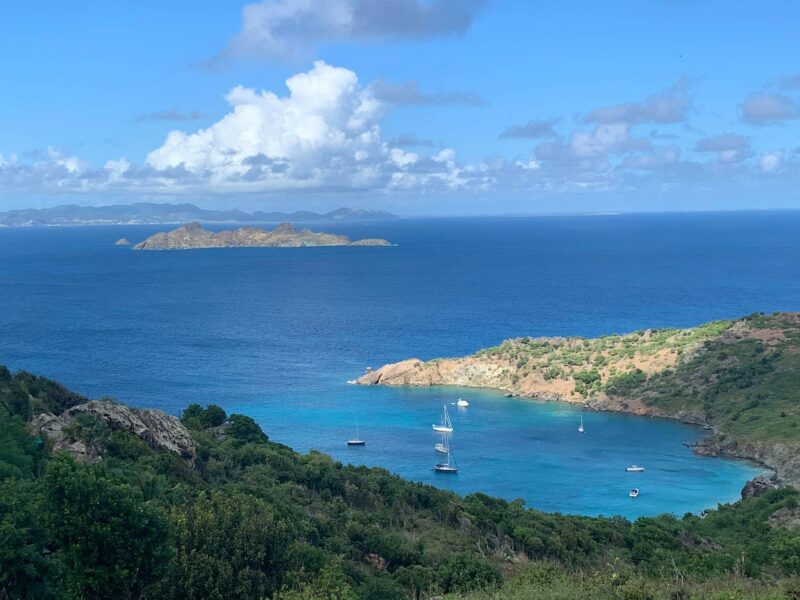 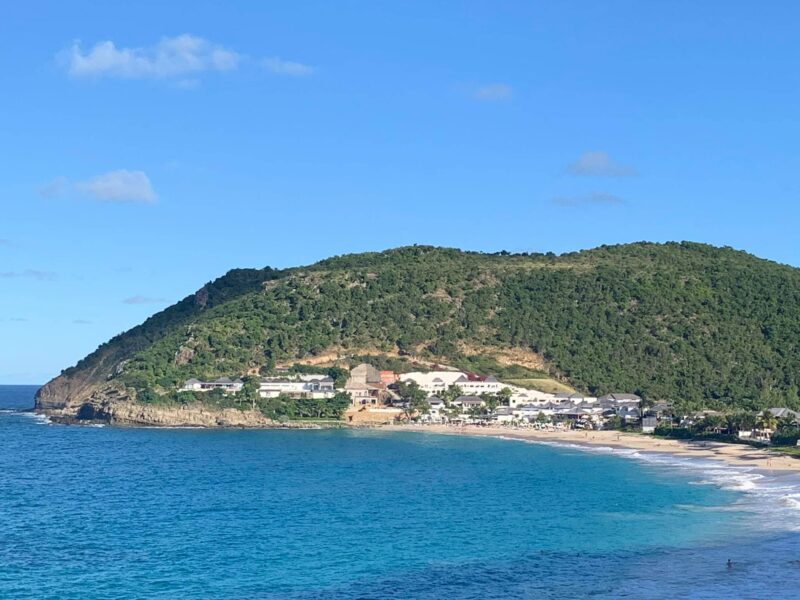 St Maarten is a 40-minute ferry ride away.

There is no public transport on the island. The car and the scooter are basically the only way to circulate. The choice of a scooter is risky for the inexperienced, as there are a lot of steep slopes, roads are narrow, bumpy here and there, and very slippery during and right after a rain.

Traffic is dense, with slowdowns during rush hour in Gustavia, towards Saint-Jean and Lorient. The speed limit is 50 km/h (31 mi/h) in all inhabited areas.

If you rent a car, choose a smaller model, as it will be easier to park and maneuver. A dozen rental companies have a counter at the airport, including the major international brands. The rates go up in the high season when it is imperative to make a booking.

You can find a few at the airport or the port of Gustavia.  Some offer tours to discover the island: 60 Euro a 30 minutes tour to see the north-eastern half of Saint-Barth (Gustavia, Corossol, Colombier, Flamands, Anse des Cayes), and 80 Euro to discover the rest of the island in one hour. A 90 minutes full tour costs about 100 Euro. Not per person! Prices are for up to eight people. 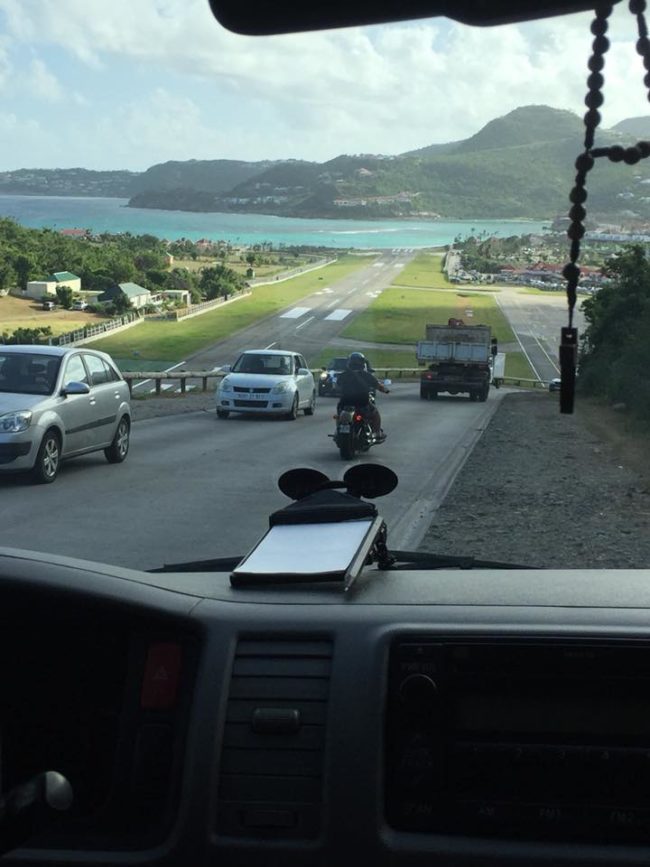 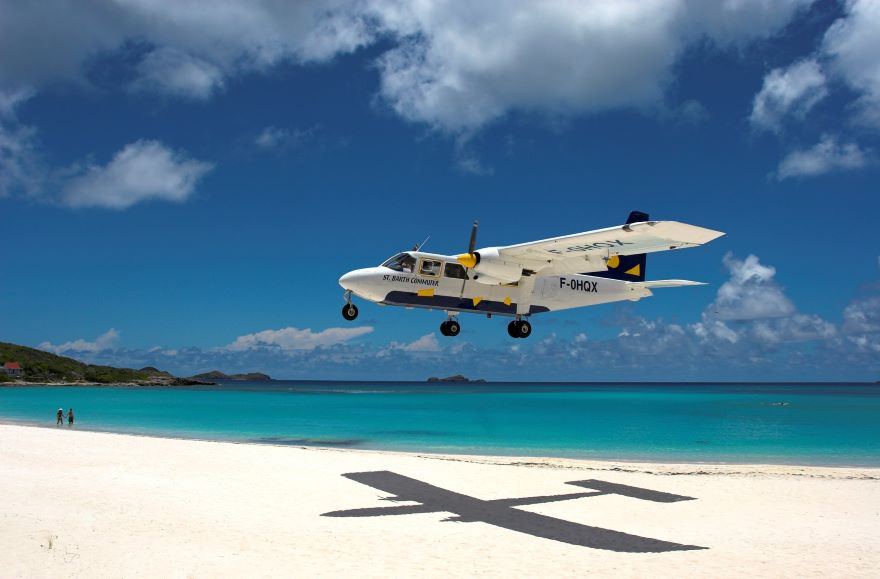 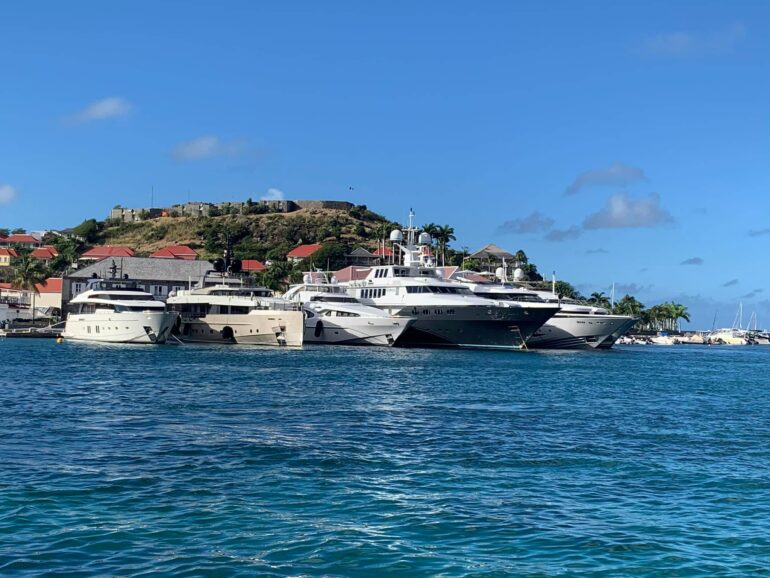 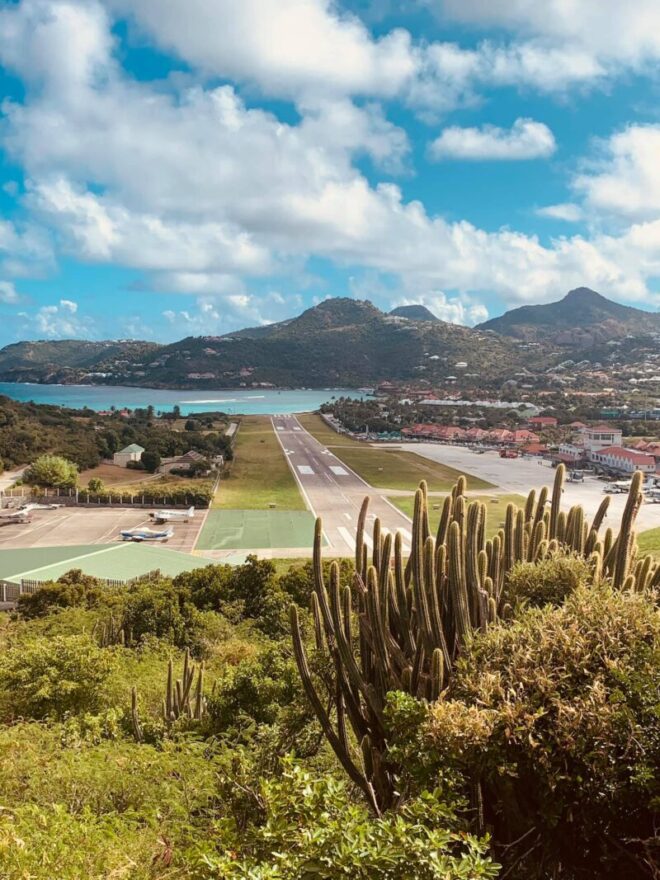 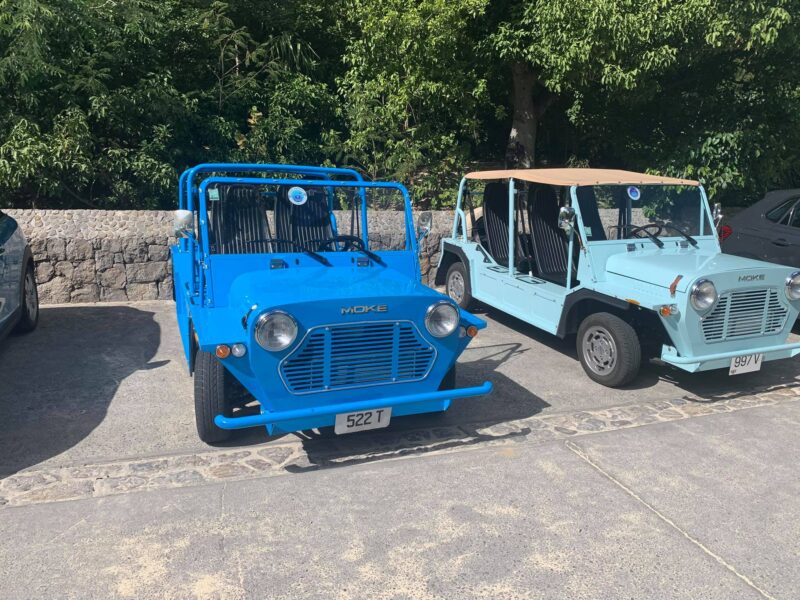 If you wish to rent a villa with a spectacular sea view, the price of 150,000 USD for a week should not scare you off. 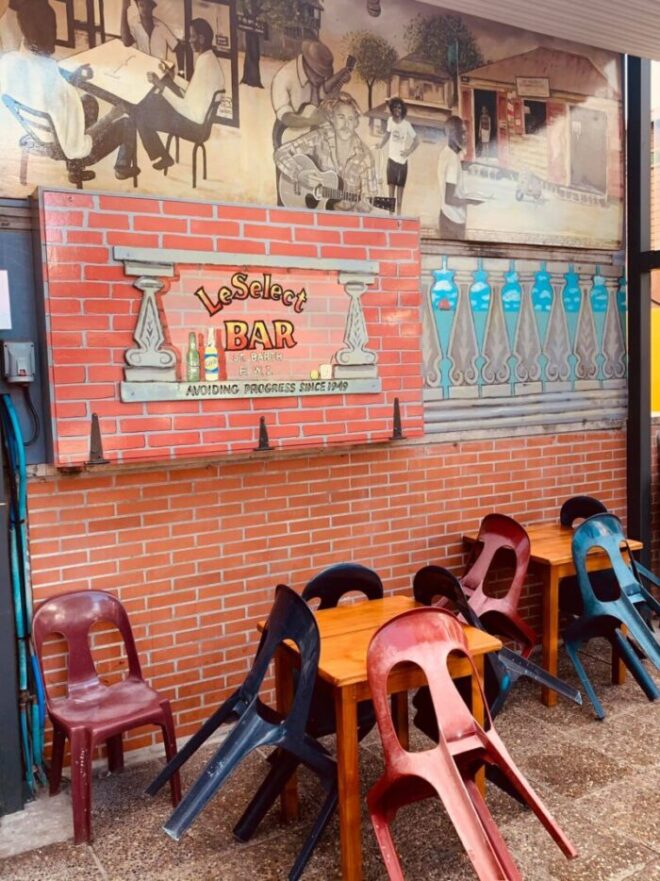 “Generally, all the parties end at around eight or ten in the evening, but every day you can find somewhere to dance from three in the afternoon. On Fridays at La Plage Club there are famous DJs and musicians performing live.

Every Saturday: Bagatelle. The barmaids all dress up in Marie Antoinette style costumes and wigs.
The Bagatelle is also famous for its truffle-flavored pizza. On the day of the French national holiday, it’s virtually impossible to reserve a table. Everybody gathers here to watch the fireworks.

Sunday is Nikki Beach. You can come here for free and – if you feel like it – dance on the table. Young and old come here to party, and whether you’re eight or eighty, you’re welcome to get up and dance. All the most famous DJs perform here.
Pizza sushi is also on the menu!
Champagne runs from €270 (Taittinger Brut) right down to €30 (!!!) (Mathusalem Cristal Roederer) You can even order Mathusalem Dom Perignon Rose Gold, but this is so inconceivably expensive that they don’t even list the price on the menu.
Crazy-rich tourists go through top-price champagne by the crateload. During the fireworks, they bring crates of champagne out to the tables and these big-shots drink it straight from the bottle, not bothering with glasses.” (Judy, 2016) 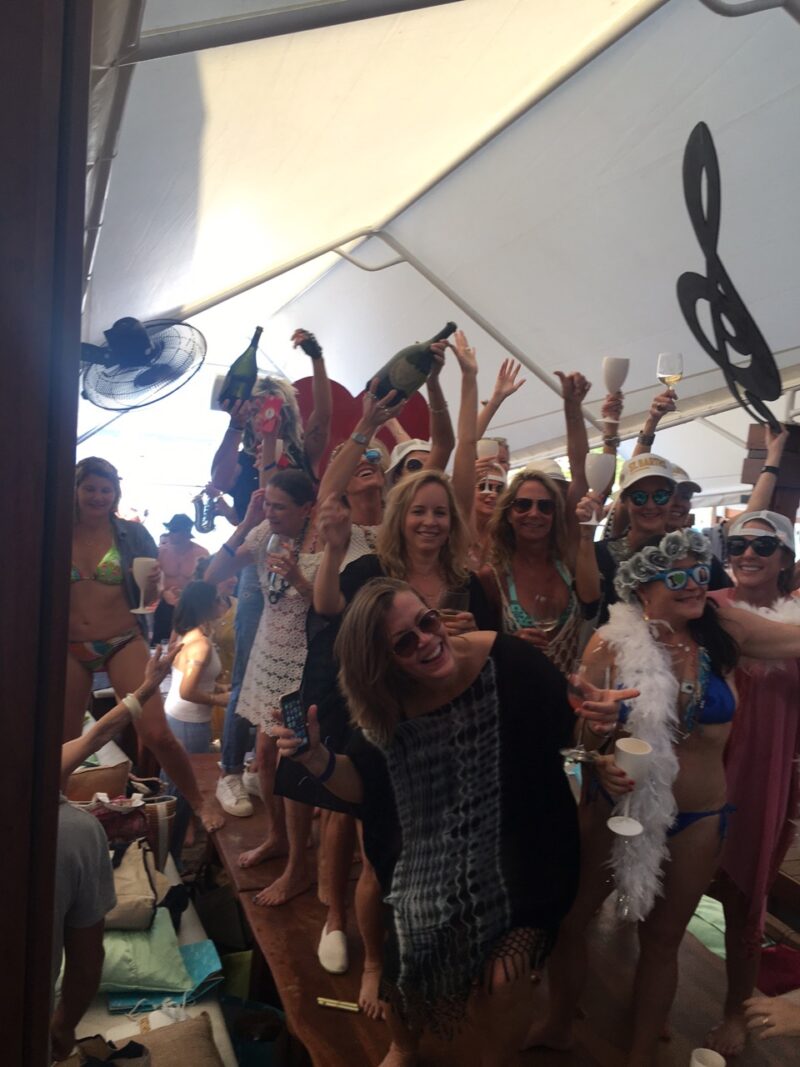 “• Public safety is very good, though of course you still shouldn’t leave valuables unattended on the beach. Still, there’s a greater chance that the tide will wash away your stuff than that a thief will purloin them.
• On the island, unlike in more materialist cultures, there are no strikes, no unemployment, no racial tensions.

"There are only two police officers on the whole island. They also work alternately. No crime. If someone is pulled over for drunk driving, as a rule, they are required to rest for half an hour, then they can continue their journey. No theft. You can leave your bag or wallet even in an unlocked car.” (J.K., 2018)

The manchineel tree is part of the family of Euphorbiaceae. Even the Latin name, Hippomane mancinella is threatening, as hippo means horse and mane means crazy – it can’t be a coincidence, right? It is very rare in Europe, and you’d be lucky to encounter one of the few artificially imported specimens. However, it is not uncommon in the southern tip of the United States, the Caribbean, and the northern coast of South America. Everything about it is toxic. Its fruit, leaves, and juices – everything. In many places they display warning signs so that tourists do not taste the fruit - unfortunately, the plant also makes a tempting souvenir, so foreigners often steal them. In such cases, the only thing that gives them away is the red ‘x's often painted on the trunk. Don’t believe that its danger is overstated: the milky juice produced by the manchineel can cause severe skin damage as if hot embers had fallen on the body. Inflammation is accompanied by swelling – it’s for good reason that the locals tell tourists not only to avoid eating anything from the plant but even to avoid sheltering under it in the rain because the toxic juice can be harmful to the skin even when diluted in rainwater.” 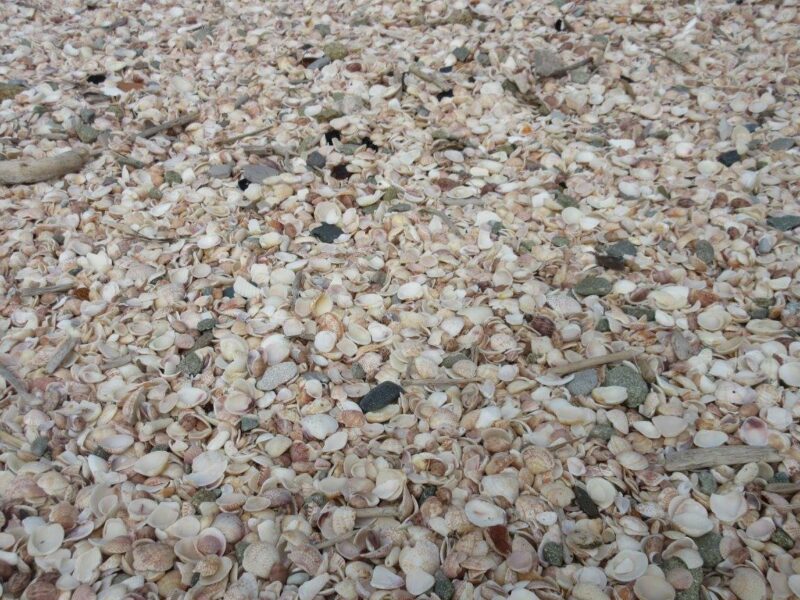 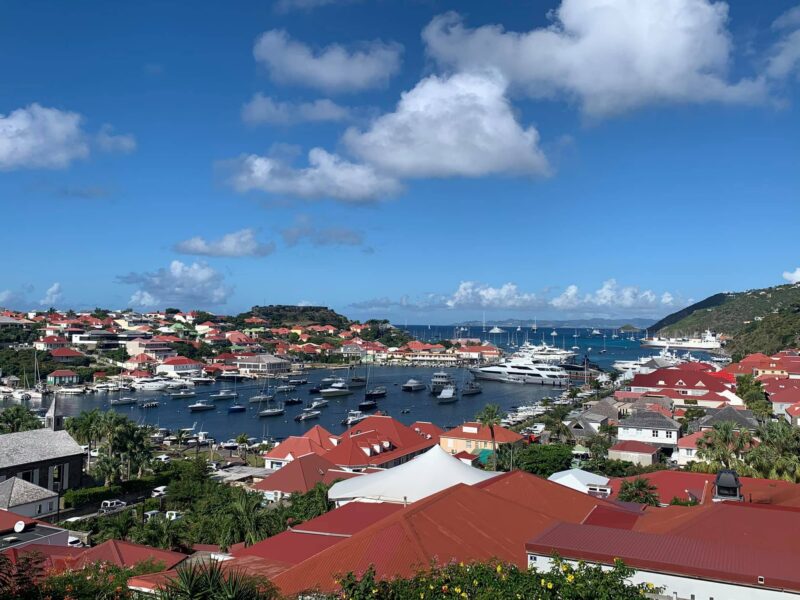 Saint Barthelemy is a Caribbean island, an overseas territory of France. St. Bart's, a shortened name, is in everyday use. French people like it that way: Saint-Barth.

The closest other island is Sint Marteen/St. Martin (northwest of St. Bart's).

Size: 24 km² (9.2 mi²) - one main island and several small islets in the Leeward Islands - the mainland can be walked around in half a day

The majority of the population is European descent; about half of them descended from the original settlers who came in the 17th century, the other half recent immigration from Metropolitan France.

In 1784–1875, Sweden traded Saint Barthelemy, this West Indian colony from France, in exchange for trading rights on Gothenburg (the largest Swedish port). In 1875 Sweden sold the territory back to France after a referendum where the locals voted for a re-unification with France. The Swedish colonial rule is reminded by the name of the capital city, Gustavia (King Gustaf III was the King of Sweden between 1772 and 1792). In Gustavia, some signs are both in French and Swedish. The official name of the airport is Gustaf III Airport.

After the French rule returned, Saint-Barthélemy had slept like Sleeping Beauty princess until 1956, when the prince, in the guise of Rockefeller, galvanized life into the island by the kiss of snobbism. Wealthy Americans, celebs started to frequent the island where the tropical Caribbean and the refined French taste have successfully mixed.

In 2012, as a so-called French overseas collectivity, the island also became an overseas European Union territory.

Part of the island's appeal is that there is no mass tourism. The price level keeps away backpackers, tour operation package consumers. It is forbidden to build a villa higher than a palm tree. Hotel investors better look elsewhere in the Caribbean region.

On Saint Barthelemy, prices are about 25% higher than in the expensive Paris.

The elite tourism makes the island rich. So much that since a few years ago, residents don't even have to pay taxes.

The first settlers of the island, the French, were Normans, Bretons, and from the region of Vendeé. Despite the almost hundred years of Swedish colonial rule, Swedes left a minimal cultural and genetic mark. In the first half of the 19th century, the Black slaves and the mulattos were three times more than the white settlers. But after 1857, when France abolished slavery, most freed slaves left the island to try their luck in more prosperous destinations. In the last two decades of the 19th century, basically, the descendants of the first settler families made up the population.

Nowadays, these old rooted White French inhabitants are loyal to France, speak French (though with a slight Creole touch), and even keep few traditions of their descendant's original French region. They tend to dislike non-French business people who look for opportunities on the island. However, the younger generations of these families tend to be somewhat Americanised and don't look very different from California's surfer beach boys or selfie addict teenage girls.
Anyway, about half of the French population are new settlers from mainland France. 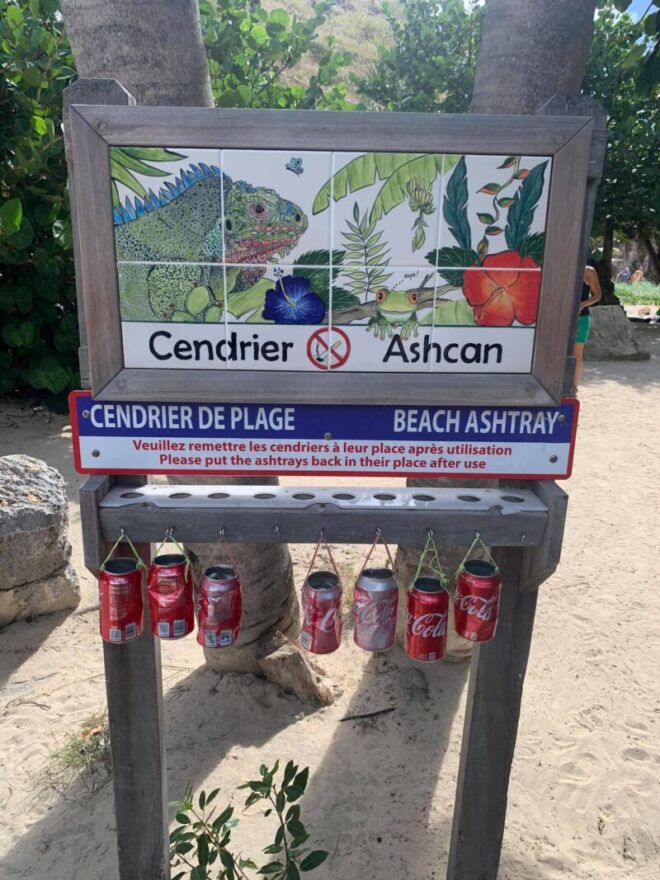 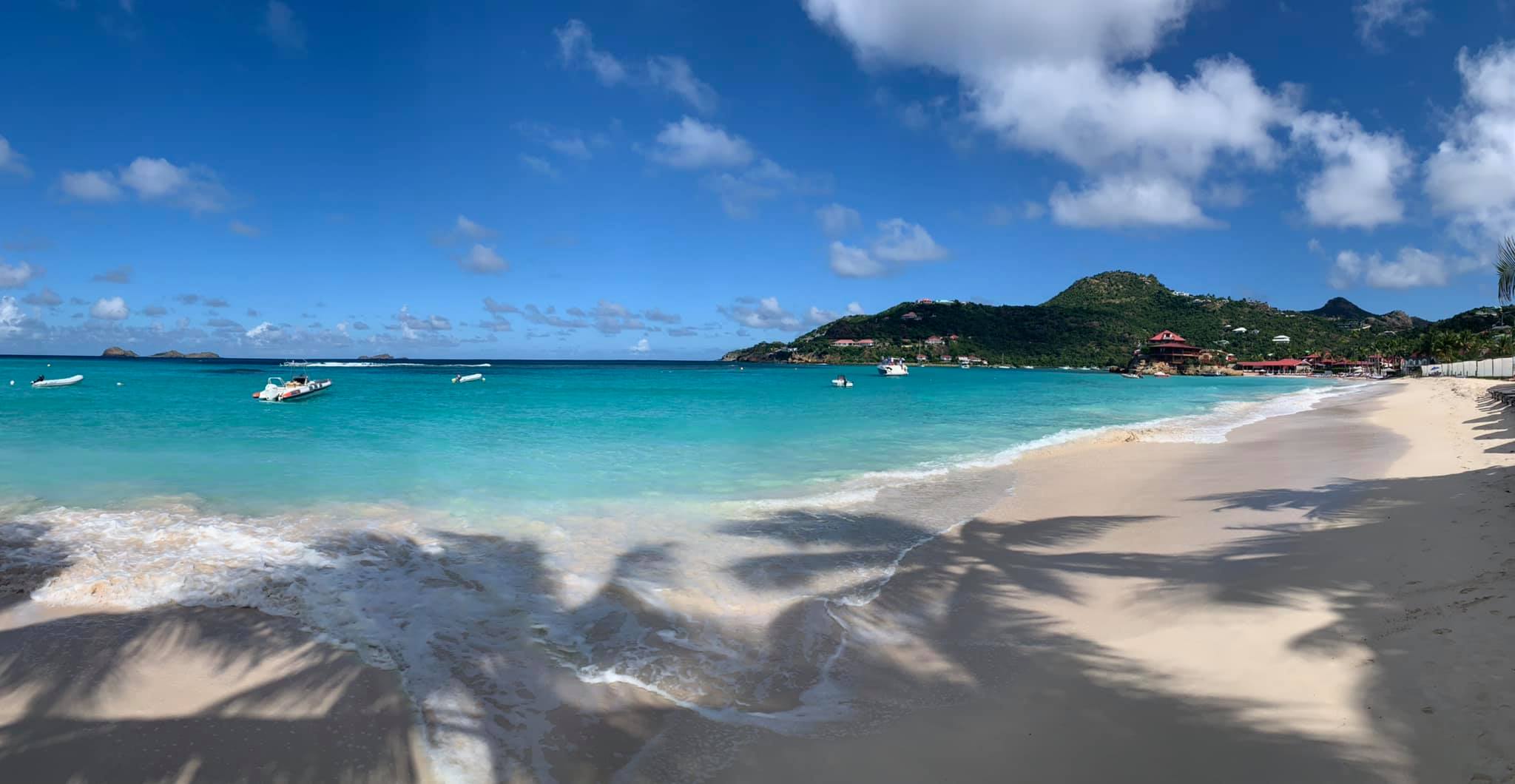 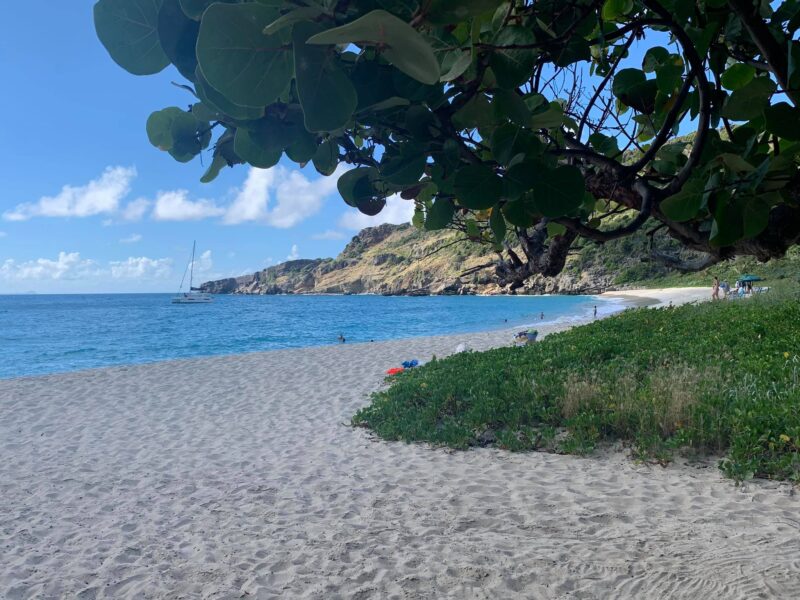 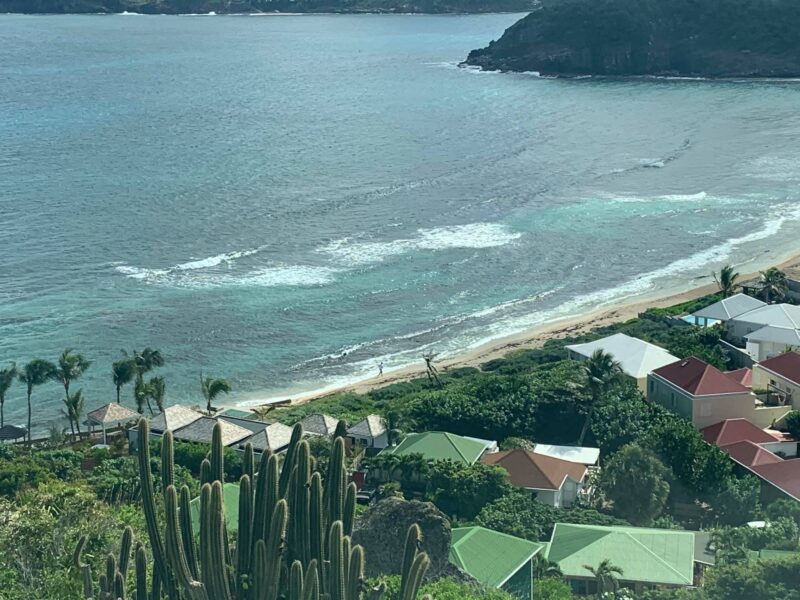 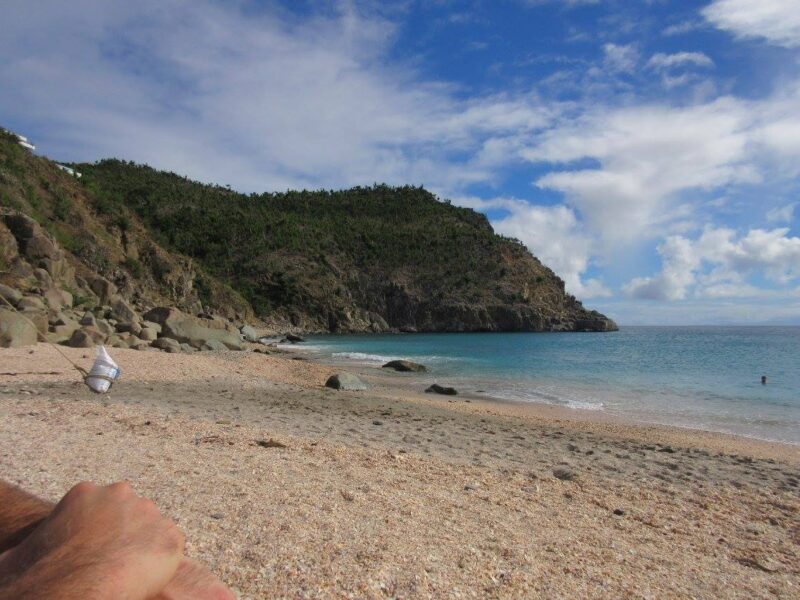 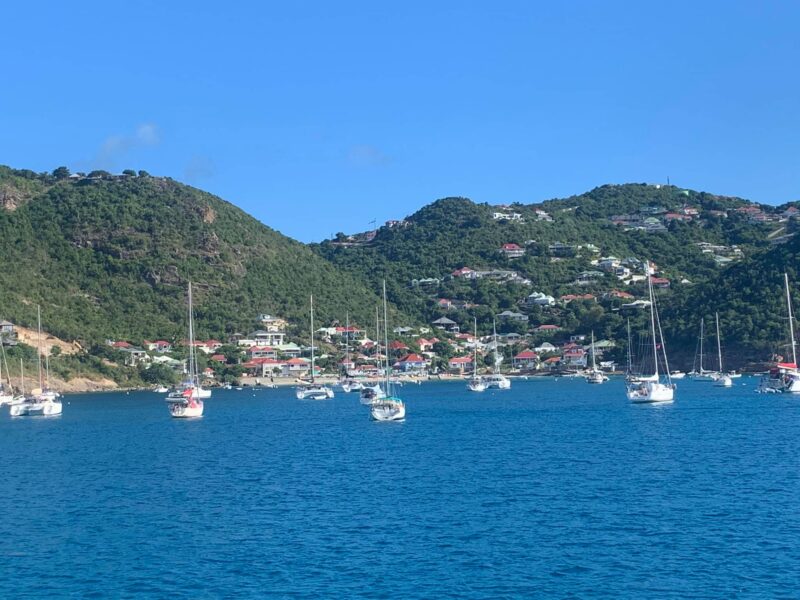