1. Sailing on the canal-like Backwater (on the cheaper ferry) and gazing wide-eyed at the diverse landscape and the life of the riverside villages
2. The bright colors of the traditional dresses worn by the Kerala women, and their unique elegance
3. The elephant camp of Guruvayur “by the temple city”
4. The Athirapally Falls near Thrissur Dist (wear a good pair of shoes that don’t slip easily!)
5. Kovalam Beach might be the most beautiful beach in all India
6. The inhabitants of Kerala are very tolerant, including in their behavior towards strangers; it’s great to see the different faiths living peacefully side-by-side
7. Grilled fish, liberally spiced, then wrapped in a banana leaf. Delicious.
8. You can see elephants in a lot of places, and I always like to see an elephant
9. The fresh mountain air in Munnar, combined with the spectacular greens and wonderful aromas from the tea plantations
10. The folklore museum near Kochi (Thevara)

1. Many Hindu temples don’t admit non-Hindus (for instance the most beautiful temple in Trivandrum
2. We wanted to bathe at the beach in Kochi, but one look at the state of the water persuaded us otherwise
3. Not worth spending much time in Trivandrum – it wasn’t all that exciting
4. Some of the delicacies of Keralan cuisine didn’t really impress me, but maybe I’m just too used to the tastes and options of the Indian restaurants back home
5. It can be a little uncomfortable, the way locals stare at you if you’re a white tourist
6. There are too many tourists in Kochi, and big crowds at all the major sights
7. Though fewer than elsewhere in India, there are still a lot of beggars here, and often little children will follow tourists around – either to sell some little trinket, or just to beg
8. A lot of bugs and reptiles, including – thank goodness not venomous – snakes; or at least that’s what they told us. After it rains there are clouds of mosquitos
9. The performances showcasing the local style of folk dancing go on too long, and get a bit boring after a while
10. We took a houseboat tour, but the boat was dirty and the crew seemed oddly restless and uneasy 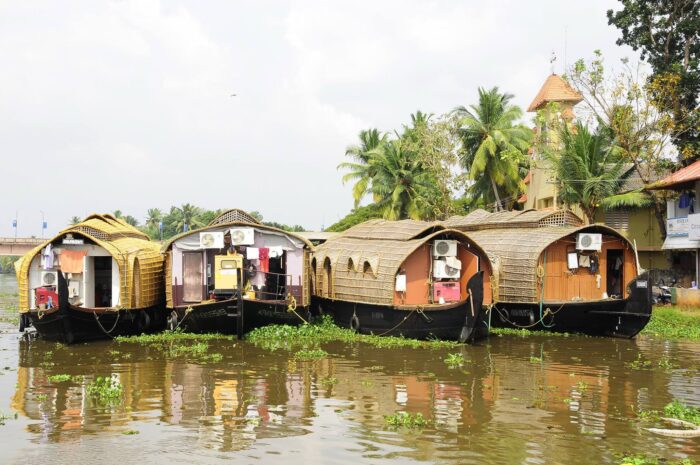 “It’s possible to take a houseboat through the ‘backwaters’ – a network of canals – as far as Kumarakom. Unfortunately, a combination of distance and poor organization turned a four-hour cruise into a shorter journey of an hour and a half: the boats have to ask for permission to be on the water during a specified period, and this cannot be altered. We were two and a half hours late setting off, and so our window of time on the water was reduced to an hour and a half. Still, it turned out that this was, in my opinion, just enough time to get a decent sense of what such a trip entails, and four hours would probably have been too much. On both sides of canal can be seen coconut palms, villas and shabby houses.

An alternative boat trip takes you across Perijar Lake, and this is more interesting. While we were waiting for our ship, resourceful monkeys tried to steal from us everything they could get their hands on – keeping our valuables safe from them was already a memorable experience! Then, if you’re lucky – and we were – you might see elephant families walking along the lake shore, as well as warthogs, wild deer and many species of bird. If you were extremely lucky you might even see one of the 15 tigers living in the park, but the chances of that are very slim.

The lake cruise lasts one hour, sitting in an open-topped boat, and as the locals point out, it is forbidden to stand up. If you don’t like this obligation to remain always seated then I wouldn’t recommend the cruise, but at the same time the scenery is very beautiful.

Another stop on our itinerary was a visit to a spice plantation. This lasted an hour and a half, and we learned a lot of interesting information about local working practices, and the cultivation of coffee, tea, banana trees (there were over thirty of these) as well as coconut palms, cinnamon, cocoa, turmeric, nutmeg, various black pepper varieties and much more. In the end, of course, there was an option to buy these products, but at three times the price in shops. 😊

In addition to these, there were a few more stops on our itinerary. One was a ‘combat demonstration’ – it was better than I expected, though I’d describe it as more of an acrobatic display conducted by five men over the course of an hour.

The next stop…. well, I don’t know. I would only recommend it to the truly dedicated. It was a ‘dance evening’, and consisted of two men, dressed in strange costumes and with their faces painted like masks, dancing while a third man played the drums and sang. This was all supposed to tell some kind of story or legend, but to the unaccustomed European eye it was all completely incomprehensible. For example: they demonstrated in advance the acting moves that we should recognize as they performed the story, such as rhythmic eye movement during three minutes of otherwise absolute immobility. Then the same, but with a slight movement of the nose, or mouth, or whatever. Almost none of the guests enjoyed it.

Our final stop involved a sightseeing tour of Kochi, but instead of showing us the city center, they took us to the little beach. It was a depressing sight. In my life I’ve never seen such a dirty, littered beach. Repulsive. The shops on the narrow streets had the atmosphere of a bazaar.
We visited a church, which was the first Christian church ever constructed in India. That was the highlight.” (Edith, 2018)

The local driving culture is simply unbelievable: the fastest and most reckless is king, and there are no rules. Whoever beeps the horn has right of way, and the others can shift for themselves. An example: an improbably heavily laden bus is being overtaken by a motorized rickshaw. The rickshaw honks the horn at the bus, and we (in a Toyota SUV), honk in turn at the rickshaw, as we overtake him thanks to our greater speed and momentum. Meanwhile, an oncoming car is also being overtaken by a car, meaning that five separate vehicles have to squeeze past one another on a two-lane road, yet somehow it works. Scenes like this are repeated practically every minute, yet our driver isn’t in the least nervous. He doesn’t curse or think twice about the overtaking maneuver. Of course, this is all done in torrential rain, since we’re in the middle of the rainy season. To a European, it seems impossible that anyone could survive on these roads for long, but we drove around a thousand kilometers on the roads of Kerala, and never saw an accident.” 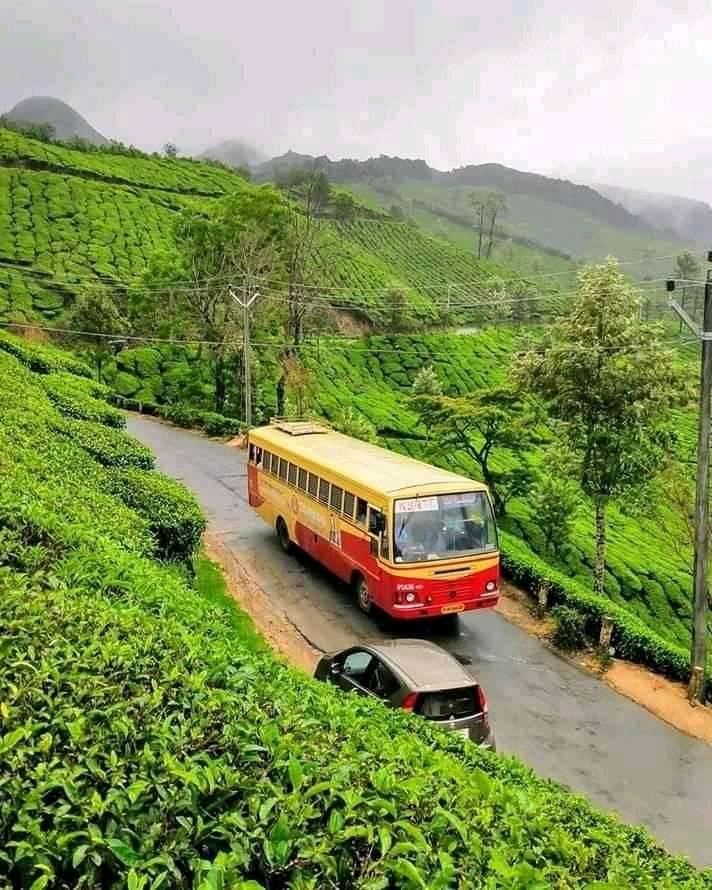 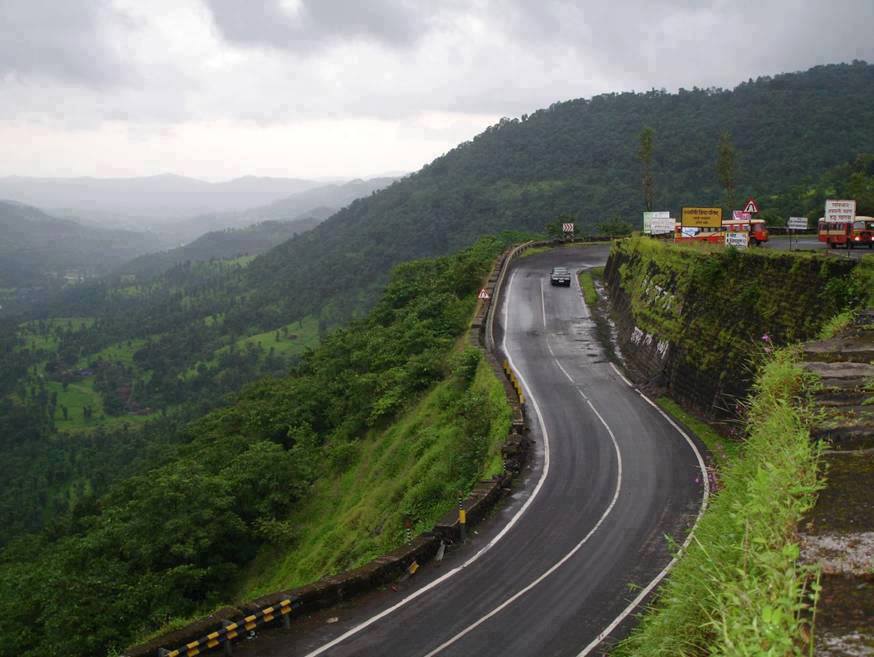 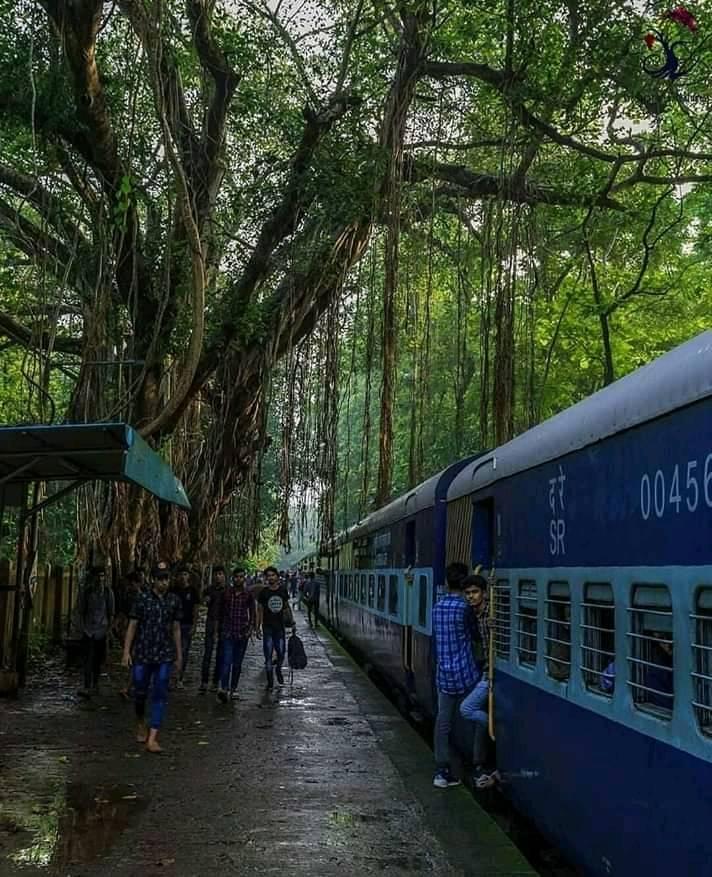 It is worth trying the so-called boutique hotels, which are small, cozy, no large-scale character. You can stay in the buildings of former colonial plantations, hotel eco-hotels, and you can even stay in boarding houses in the vicinity of locals.

By Indian standards, Kerala is a safe tourism destination. Of course, the general precautionary rules must be observed. 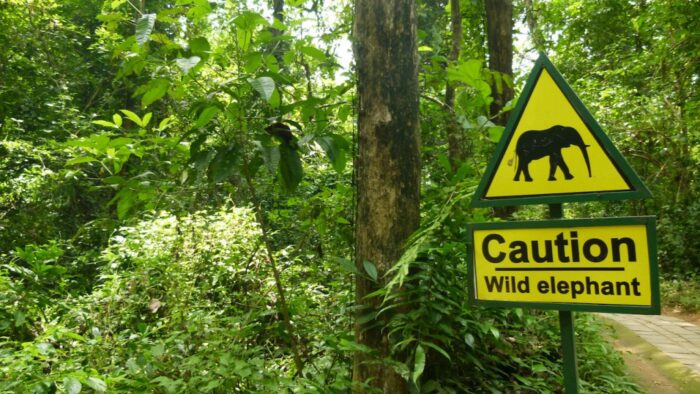 Always have drinking water with you because tap water (although not dirty) is not drinkable. It is risky to drink drinks having ice cube.

“Exotic and spicy, sure, but what about your digestive system? The prejudice is perfectly legitimate. Taking a few basic points into consideration, and acquiring some local knowledge and routine precautions, it’s possible to minimize the risk of an upset stomach. First of all, it’s best to eat in the places where a lot of locals eat, since at least there the food is likely to be fresh.

If it’s your first time in a particular restaurant, don’t order anything with meat, dairy, or eggs. Here’s one practical reason for the prevalence of vegetarianism in India – a bowl of rice seasoned with some spicy sauce is much less risky in an unfamiliar place than, say, scrambled eggs.

In most parts of India, it isn’t safe to drink the tap water, but there are many kinds of bottled water available, often chilled, and for just a few cents a liter. Some staples of home cooking can’t be bought in India, or at least aren’t widely available. Milk, for instance, can usually be found, but it’s worth finding out precisely where it comes from. It’s also worth abstaining from fresh fruit, at least until your immune system has grown accustomed to the challenge of India.

No matter how careful you are, diarrhea can always strike. I’ve recently come across what seems to me to be a miracle cure: it’s called bolus adstrigens, and it comes in a brown pill. It functions essentially as a gastric disinfectant and forms a protective layer on the walls of the intestine. In practice what happens is you take the pill, and it’s effective for around 12 hours. After that, you pass a healthy, normal stool, and if whatever you had wasn’t serious, you should be back to normal. I’ve ended up in a few uncomfortable situations, especially before I found this medicine.

A few of my fellow travelers went through something similar: first, their belches smelled of rotten eggs, then they threw up whatever they’d eaten. It seems that a hard block gets formed somewhere along the way, and the barely digested food pools above it, sometimes for a few days until the sufferer begins to notice that something isn’t right. Anyhow, since I found the brown tablets, I’ve had no problems.

If someone’s digestion goes wrong, the first thing to try is a strict diet: rice, potatoes, mineral water, bananas, and maybe cookies. If things haven’t gotten better by the time scheduled for departure to the next destination, take a brown pill, which will get anyone through a journey, even if it’s a 12-hour bus trip, getting you a few hundred kilometers further into the journey, and even saving you a night’s cost of accommodation. 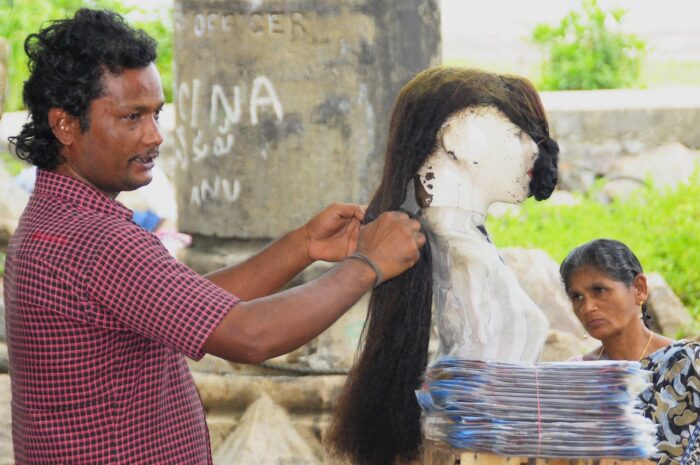 Kerala is a federal state of India.

Kerala has the pride of having the highest per capita of alcohol consumption in India. Rum and brandy are the most popular drinks. Still, life expectancy is 75 years in Kerala, whereas India's average is 69 years.

God's Own Country - this is the slogan used by Kerala Tourism Department.

One of Kerala’s definitions is “India’s Green Spice Garden” There are virtually no industrial facilities in Kerala, which helps a lot to protect the natural environment.

The backwaters make up for almost half of the length of Kerala. These backwaters include a network of turquoise and tranquil streams and canals, all gorgeously interwoven. Kerala's backwaters are mostly composed of lagoons and lakes.

Kerala has a tropical climate. The best time to visit is between December and March. After March, the monsoon comes, and the tour itinerary can be washed away by the rain. It is warm all year round, with a maximum temperature of 30-31 degrees and a minimum of around 24 degrees. 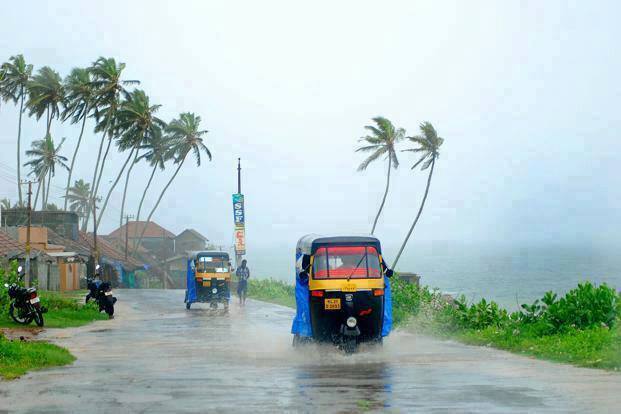 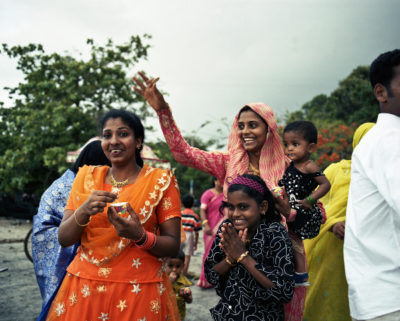 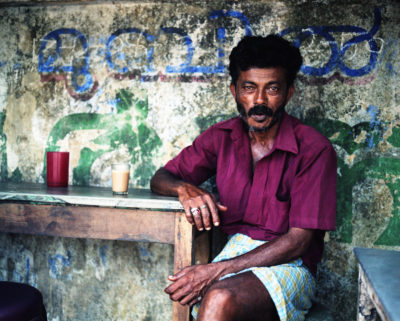 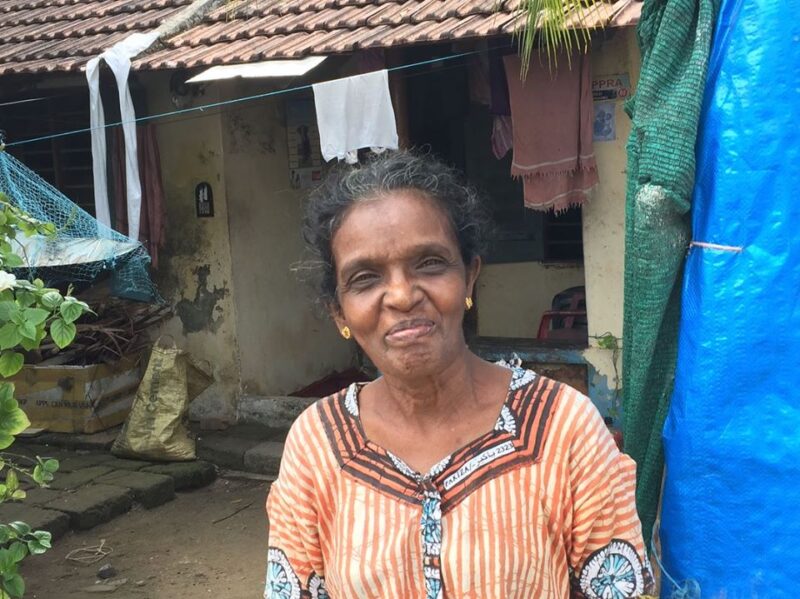 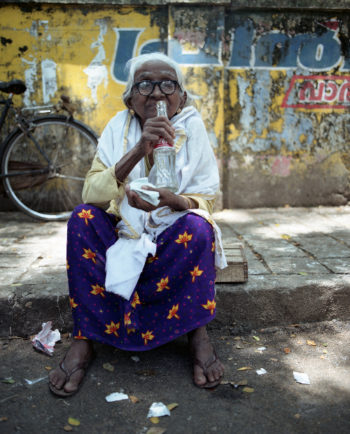 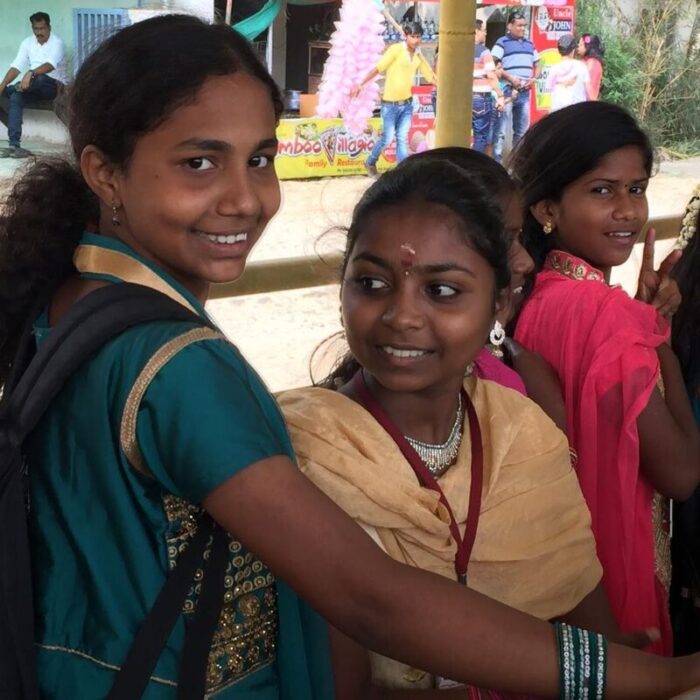 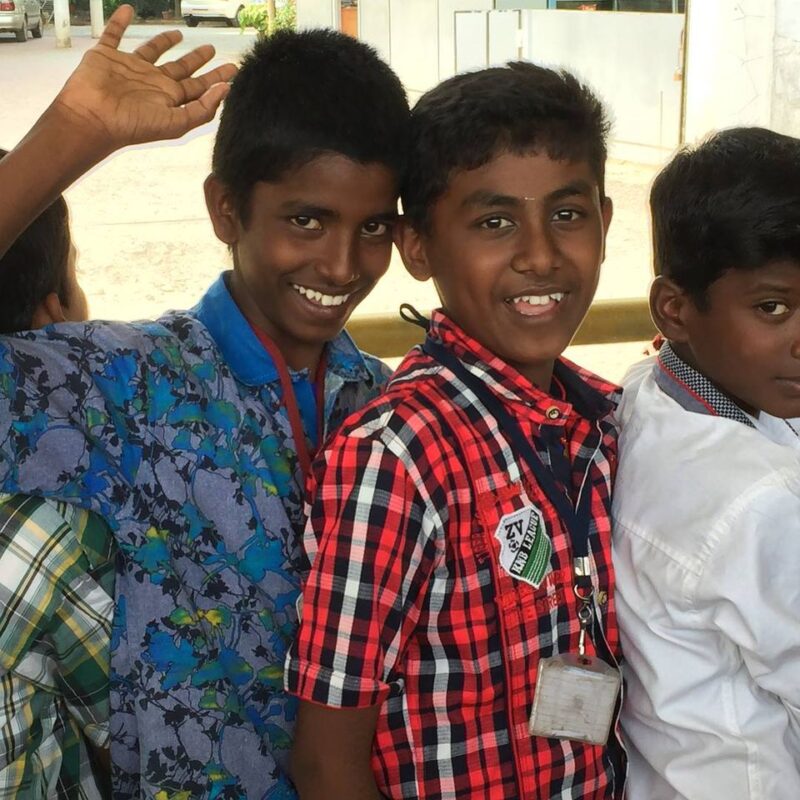 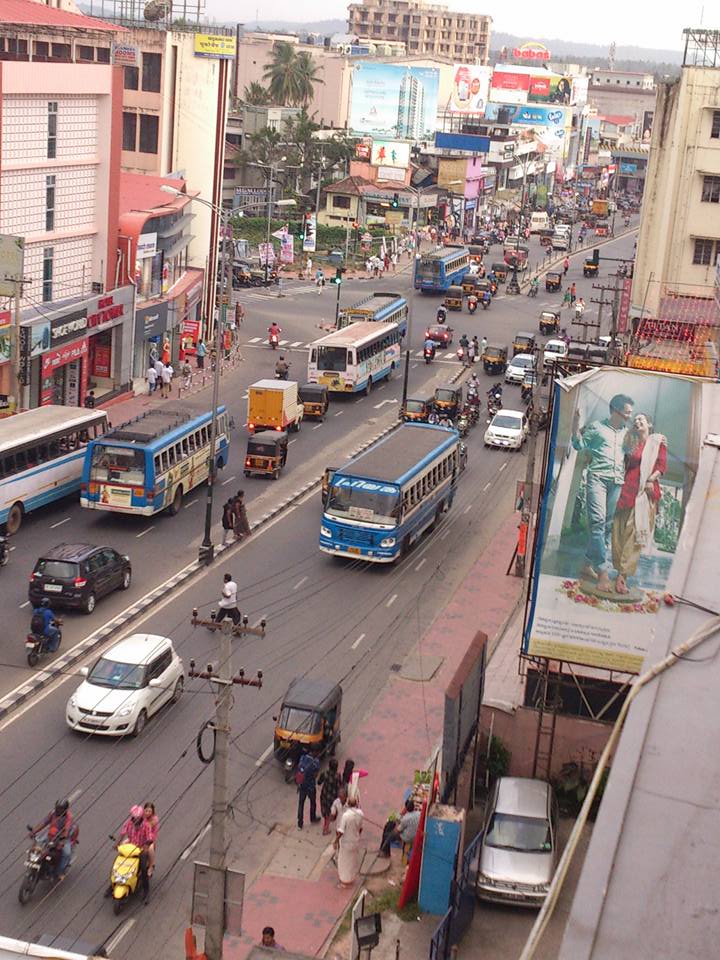 1. Ayurveda massage- The Ayurvedic doctors, the consultation, the diagnosis were free; we paid for the medicines which were cheap and contained natural active ingredients only.

2. In the local restaurants, the vegetarian menus cost 70-100 rupees only, and for that price, they refilled the plate several times. It was very spicy

3. The eggplant masala was divine.

5. The boat excursion on the backwater canals along beautiful palm groves

7. The view from the lighthouse

1. The Tuktuk taxi drivers cooperate in cartels so to keep prices high for the tourists.

2. There are many Kashmiri shops, but they set a high price level

4. Bugs in the accommodation, even in better hotels

6. In April, the unbearable heat

7. The high wawes in the sea often made the bath very dangerous

8. If you can’t stand the spicy flavors, get ready to eat a lot of chapatis, roti, and rice. 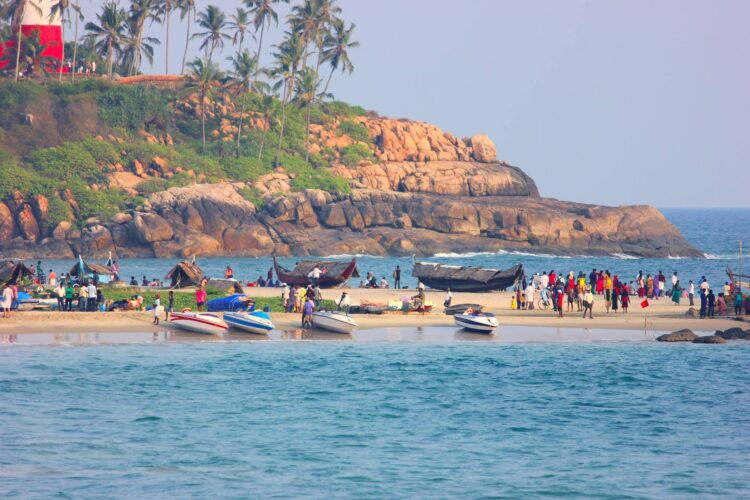