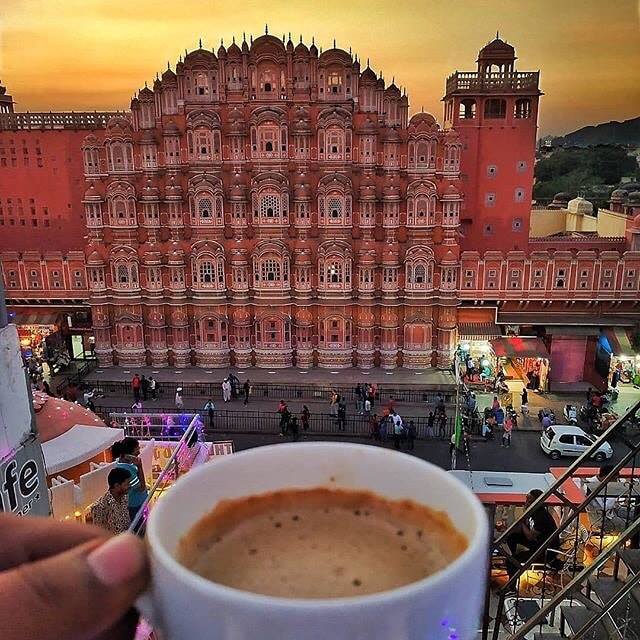 Jaipur - the right place to have a coffee

1. The well-known tourist promotion expression,, Incredible India" is given a stamp of approval here, at least around the historical monuments

2. A lot of bazaars, big competition, therefore an excellent chance to buy things for less than half price, provided you have some basic bargaining skill

3. Jaipur was called Pink City, but know the colors of the buildings are more like terracotta, and that is one of my favorite colors (the color of the Hawa Mahal is rather a ,,salmon-red")

4. At Hawa Mahal if you are willing to climb up on the stairs, you will be rewarded with a magnificent view of the city center and the Jantar Mantar

5. Finding the optimal angle to take the best photo on the Hawa Mahl's facade - The shopkeepers of the opposite building helped us for that

6. The majestic location of the Amber Fort (or Amer Fort) and the wonderful mirrors in the welcome hall of the Amer Palace 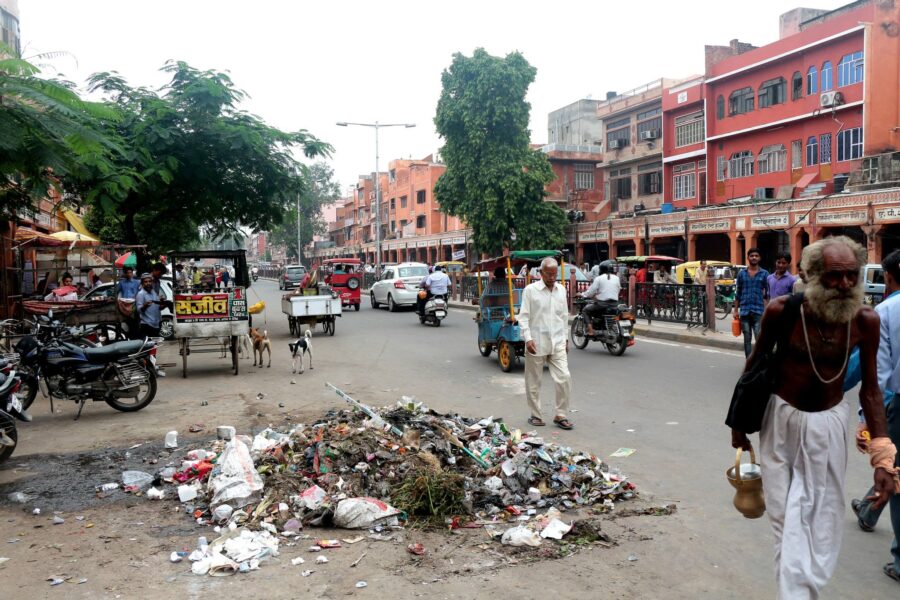 1. Hawa Mahal (Palace of the Winds): compared to the sensational facade the interior (I would rather say, backstage) is almost a nullity

2. The suicidal tourists who take photos standing in the very middle of the traffic full with cars

3.I like kids, but the Indian school groups were too loud for me (ear-splitting screams).

4. Sorry to say, but I can't stand the cobra-charmers

5. You get a sort of seasickness at the end of 20 minutes long ground-swell on the back of an elephant (a sightseeing mode there)

6. For lack of a guide, we could hardly understand the meanings of Jantar Mantar (an astronomical observation site) - a handicap for (ignorant) individual travelers 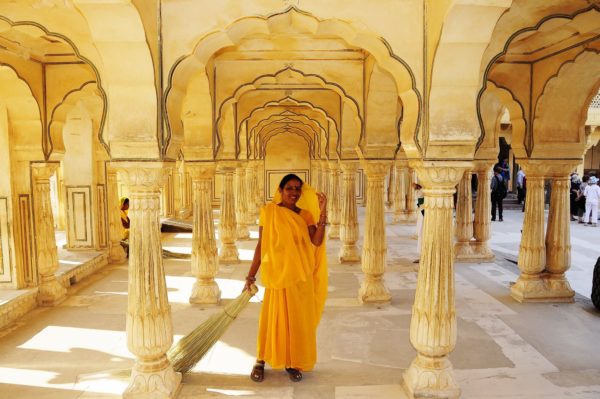 “The character of the people here is totally different to what I experienced elsewhere: they’re friendly, ready to help, and if they stop to speak to me then in most cases it’s just to chat, and not from any ulterior motive. This was also true elsewhere in India, wherever I went, but all the same, I found the people of Rajasthan the pleasantest of all. From this perspective, only Delhi and Agra really left a negative impression. Jaipur is a truly beautiful city. Most of the buildings in the old town are painted a particular shade of pink, which is why it’s often called The Pink City. The buildings display a good range of traditional Indian architectural styles, and its full of palaces constructed by rich maharajas. The pink walls are decorated with simple, white motives that run left to right in a line. It’s perfectly possible to just wander from sight to sight, like in a European city, but unlike Delhi and Agra, where the sights are spaced far from one another.

It gets really hot here in March (36°C) and the average annual rainfall is less here than elsewhere – you see the effects of this dry weather in the plants. My accommodation in Jaipur was very pleasant and easy to find (the first place I came to in India where they wrote the street name and house number in an easy-to-spot location), and I met many cheerful young Indians who invited me to dinner. The thing is, I’d been worried about this accommodation beforehand, because it seemed too cheap – just a dollar or two a night. (2018)

“It sometimes happens that drivers (whether of a taxi or a rickshaw) have no idea where your destination actually is, but they still say yes, because they want the fare.
It happened one evening in Jaipur that my two Indian travelling companions hailed a ride for me, driven by a young man in his mid-twenties. We got off to a nice start, and of course I followed our progress by GPS (I always did this in India), to make sure we were going the right way. At first it seemed that everything was going fine, and I had nothing to worry about. But then, all of a sudden, the driver turned off in a different direction, and I confess I was extremely alarmed. My pulse immediately started racing, and I felt my heart beating in my throat. I said at once (and those who know me know how scarily loud I can be in such moments) that, hey, you’re going the wrong way! The guy turned round and looked at me with a frightened expression. Then he followed my directions, and landed me safely at the door of my hotel. In other words, ladies and gentlemen, always have your GPS handy, even if you’re traveling with others, and especially if you’re traveling alone.

(In Delhi I practically had to direct the taxi drivers through the streets to my hotel.)

I’m pretty sure that they don’t intentionally go the wrong way, it’s just that they generally aren’t sure which is the right way, and since they take any opportunity for a fare, they’ll agree to drive you even if they don’t know where to go. In any case, it doesn’t hurt to be careful, and keep your eyes open.” 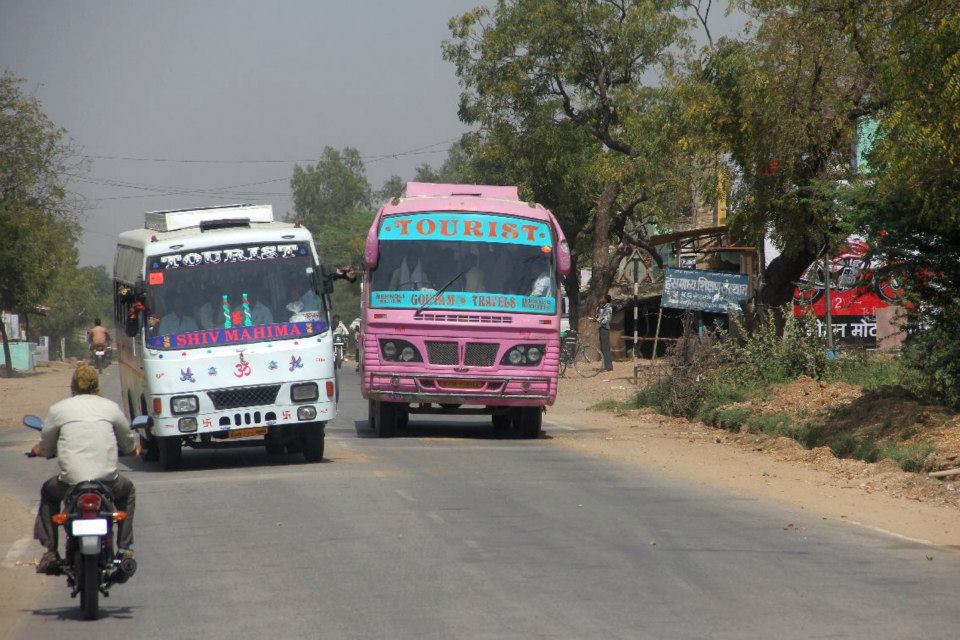 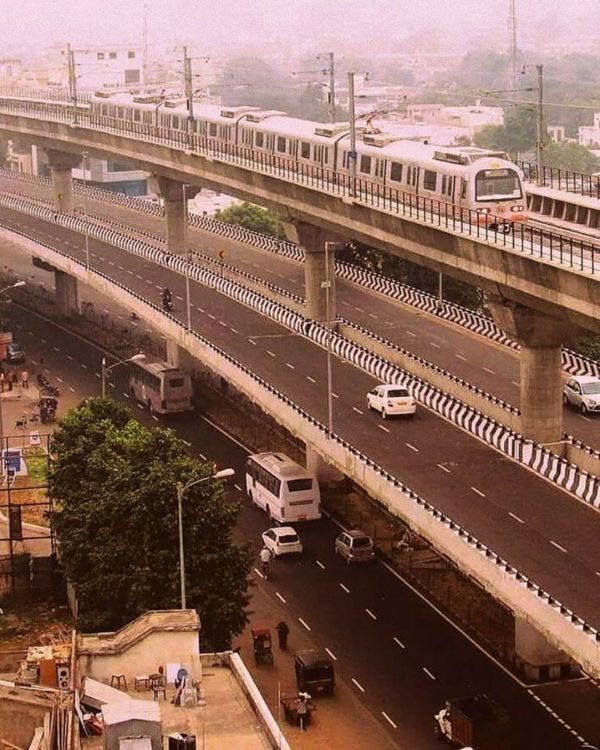 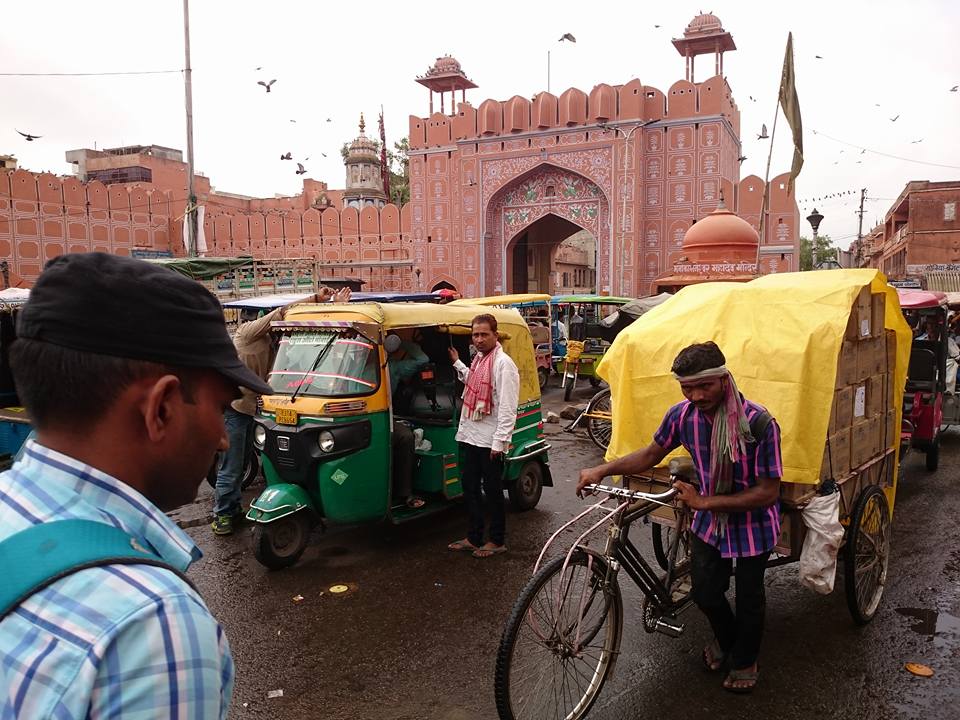 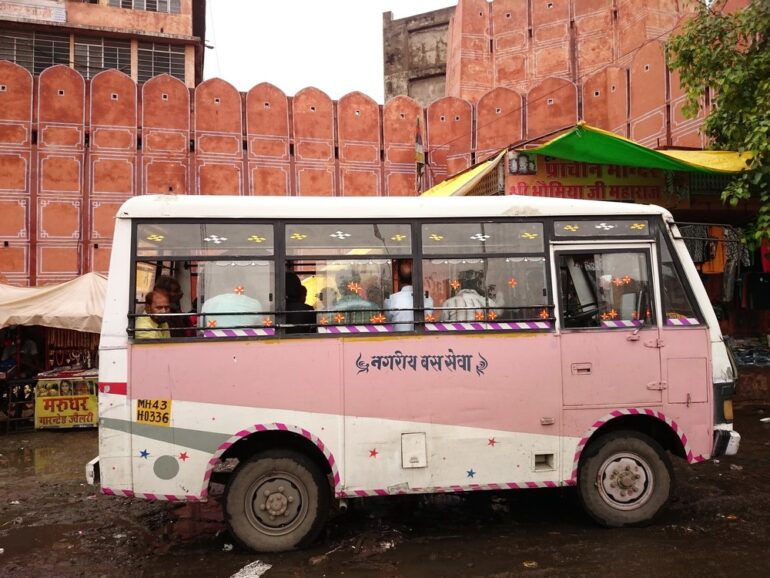 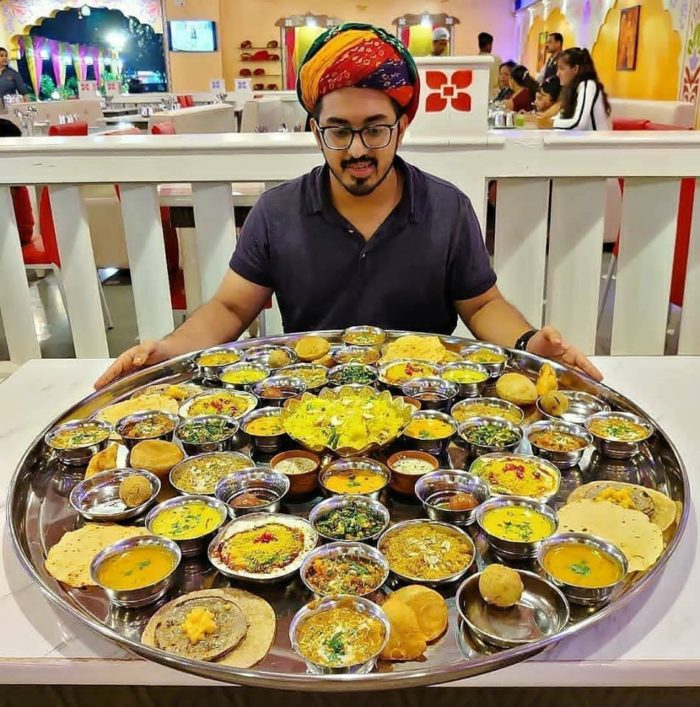 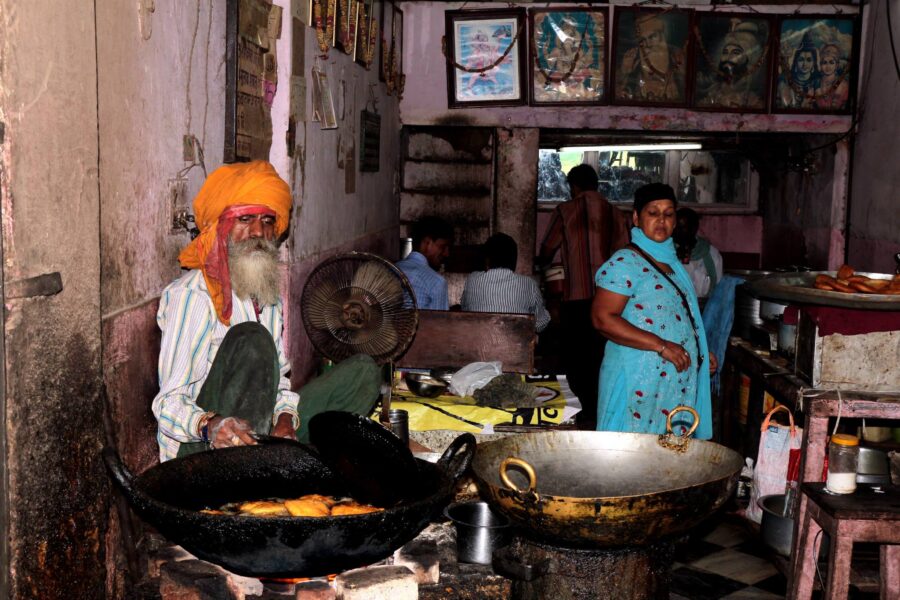 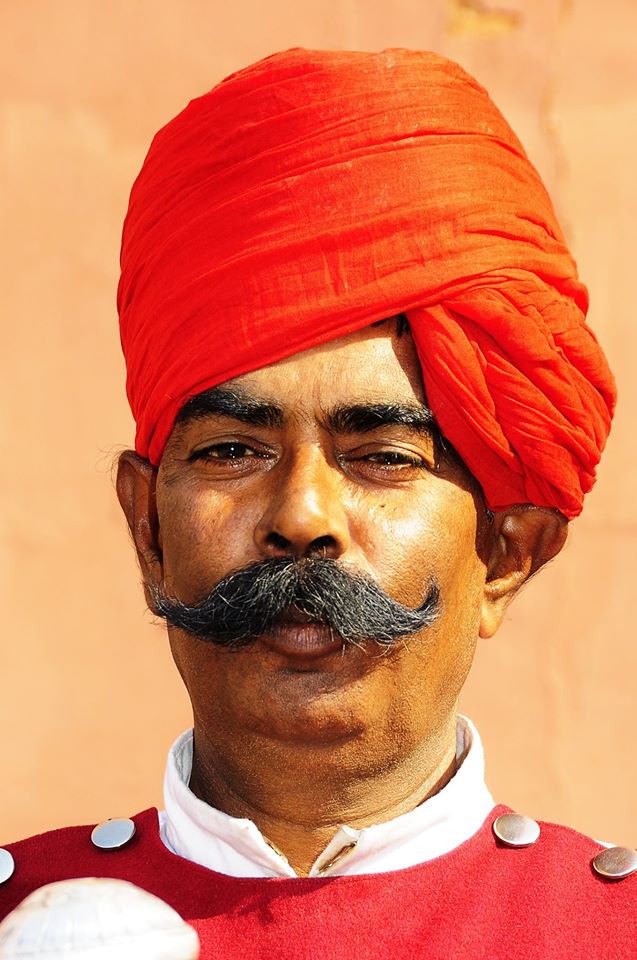 Jaipur - one of the guards of the City Palace - Elter photo 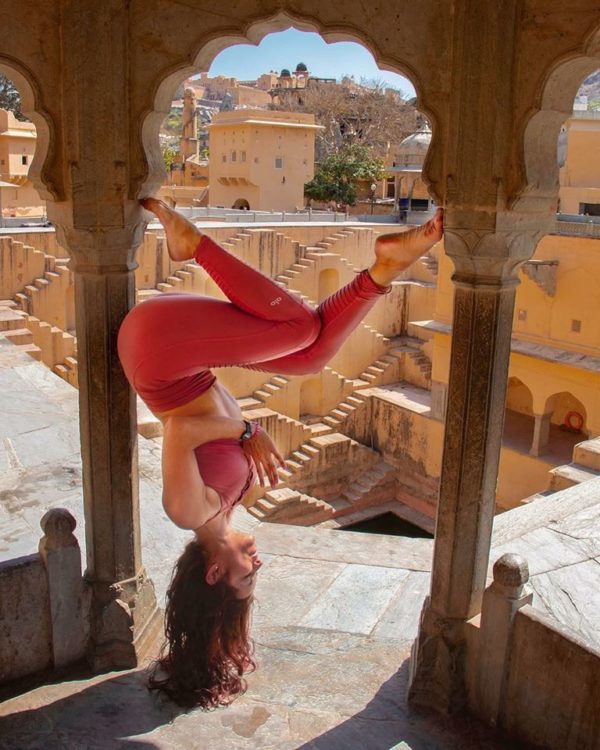 Jaipur is the capital and the largest city of Rajasthan, a federal state of India, in the northwest of the gigantic country.

Jaipur is called the "Pink City."  In 1876 the entire city was painted in pink to honor the visiting Edward, the Prince of Wales.

India's top must-see attraction is the so-called Golden Tourism Triangle. Jaipur is one point of the triangle; the other two are Delhi and Agra.

Jaipur was the first planned city of India. It was completed in 1730. The city was constructed within four years. 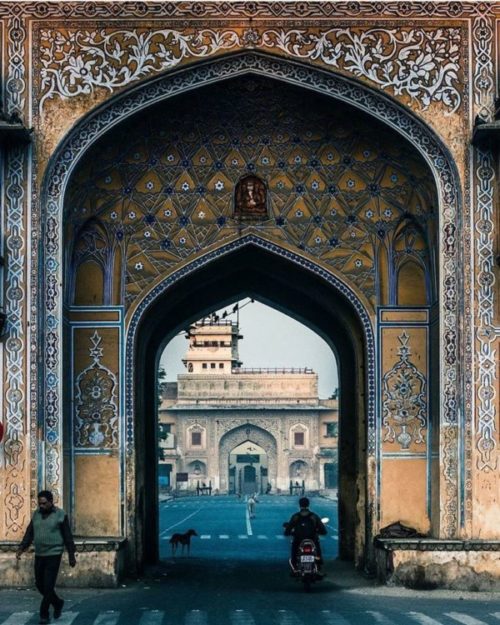 “We visited the Amer Fort on the back of an elephant, but only because we had seen India’s love of animals with our own eyes every day, and several articles we read said that the elephants of Amer are very well looked after! They only work until about noon or 1 pm, with the rest of the day given over to rest and eating. Every day they eat a total of 120kg of vegetables, which costs both time and money, so the elephant wasn’t our cheapest ride, but it was worth it. For the two of us, it cost 1100 rupees, or about $15, for a fun 20 minutes, as we swayed back and forth. It was as though we were aboard a ship, being tossed about in huge waves.”