1. Do not miss the view over Osaka from the castle

2. Going from Kyoto to Osaka (55km) in barely 15 minutes on the Shinkansen

4. The panoramic elevator of the Umeda Sky Building

5. Chuo-ku ward (district) with its cool cafés, shops, galleries, a park (at its best during cherry blossom season)

6. The streets are spotless, the whole city is admirably well organized

7. The bikers with their fancy attires and the multi-storey bike parking garages

8. The Namba underground walkway, with its cool eateries and a temporary Chicago Gallery

9. The castle and its park are a must-see

10. Well-organized metro network with passengers zealously sticking to regulations (for ex. on the escalators)

1. Just knowing about the existence of a gigantic Pokemon-themed entertainment center terrified me

2. The irritating crowd making endless selfies on the Ebishu bridge in Dotonbori

3. Everything is overregulated – it sometimes feels like being in the army

4. Brown is every old thing

5. The terrible crowd at the Osaka Castle (fully packed elevator) – we should have arrived early in the morning

6. The Osaka Housing and Living Museum was fine, but not great, and it is weirdly located at the top of a 10-storey building

7. Although it is a local invention, we didn’t dare join the crowd catching sushi from a conveyer belt in an eatery

“Many people dismiss Osaka as ugly and without interest, but I think it’s a great place. Let’s start with Osaka Castle. This is a rebuilt, typically Japanese castle built in a pagoda style with many levels. It’s much bigger, however, than any I had previously visited (Hiroshima, Okayama). They redesigned the interior very beautifully, and even put in an elevator, but the crowd meant we were packed in like sardines. If you’re planning a visit, try to go right at opening time, when most Japanese people are still having breakfast. From the top, we had a beautiful, panoramic view of the whole city. By the time we finished our tour of the castle the rain had stopped, and the sun was even beginning to break through. The castle gardens were thronged with people admiring the cherry blossoms.

If it’s raining when you visit, the Osaka Housing and Living Museum could be interesting, and I’m sorry we didn’t have time to visit it. In a faithfully reconstructed historic village you can stroll through the Japan of the 1800s, and it’s only slightly disconcerting that this historic village actually stands atop a ten-story building.

My early evening the sun was shining bright, which made it a perfect time to admire the futuristic, big-city view from the viewing gallery at the top of the Umeda Sky Building. We got there just before a perfect sunset. After paying 1000 yen we were whisked to the 39th floor of this 173-meter-tall building. There’s even a little space for couples, with a heart-shaped frame for taking selfies against. If you search online for pictures of this building, you’ll see that it was built right over a highway – it was the only place they could put it.

Going out into the evening, we were soon swept along in the mass of people in the Dotonbori neighborhood, under a forest of neon signs (including the famous Glico running man), and as well as takoyaki – a street food consisting of little balls of octopus meat – we also tried Kaiten – conveyor-belt sushi – which was first invented in Osaka.” (2018) 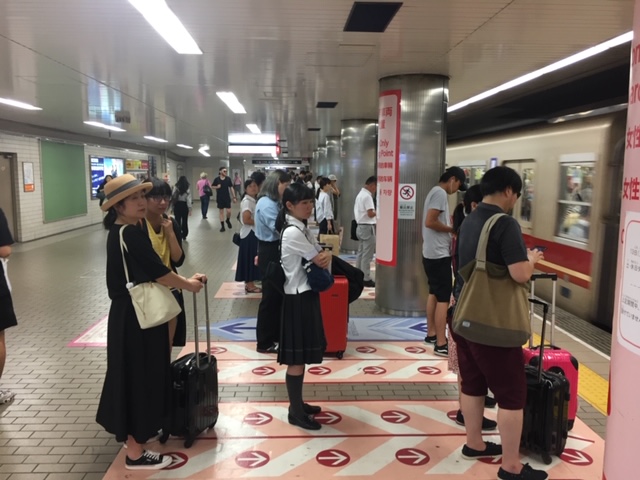 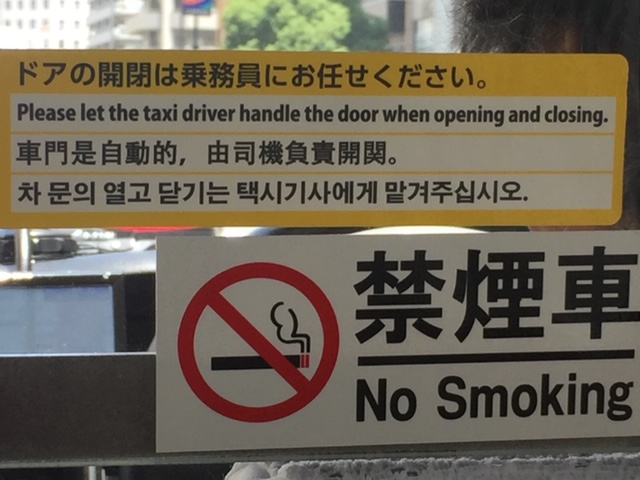 “We found a small diner that looked cheaper, local, and empty, with a view of the river, and our preliminary assumptions were so confirmed when it transpired that the chef/waiter did not speak English at all. He understood words like chicken and water, but he was not able to accurately write down the orders we selected by pointing at the menu. So it transpired that after a promptly delivered round of sake, first one plate and then another two arrived, and he also brought the requested fork and spoon next to the obligatory chopsticks, but we waited in vain for the rest of the order. When we finally asked him, it turned out that he thought five of us had ordered only three servings of food, so he had no intention of bringing more. But at least the sake was delicious.” (2015) 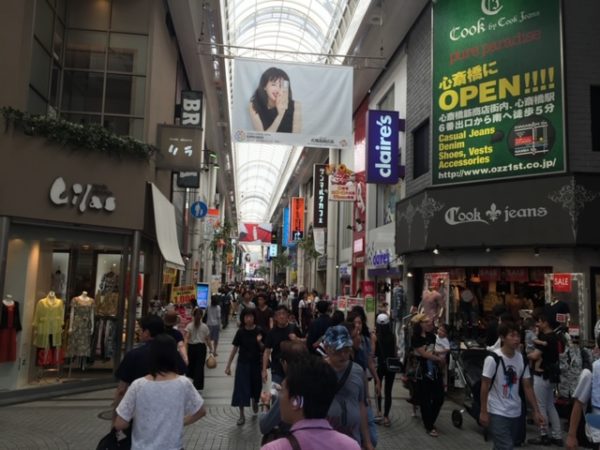 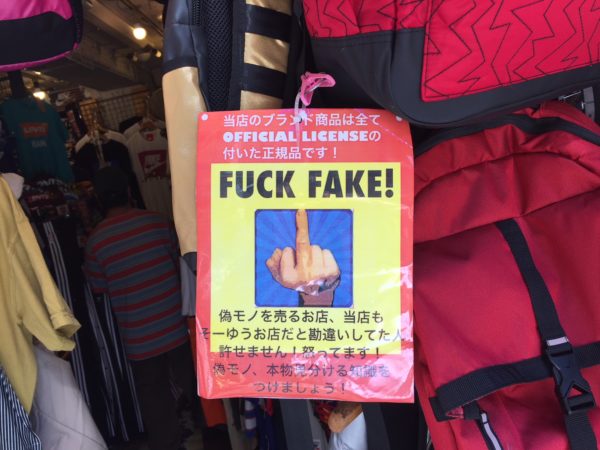 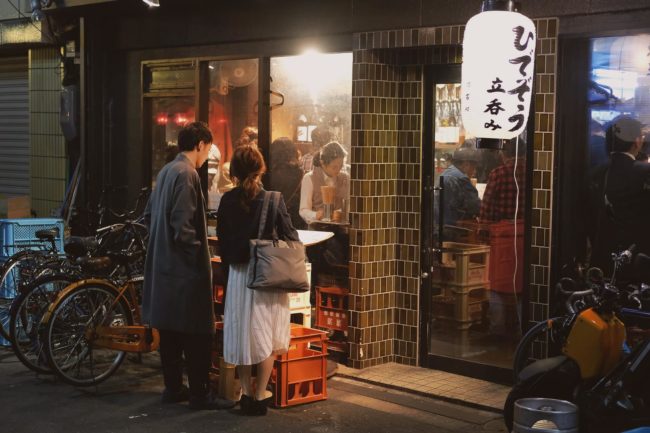 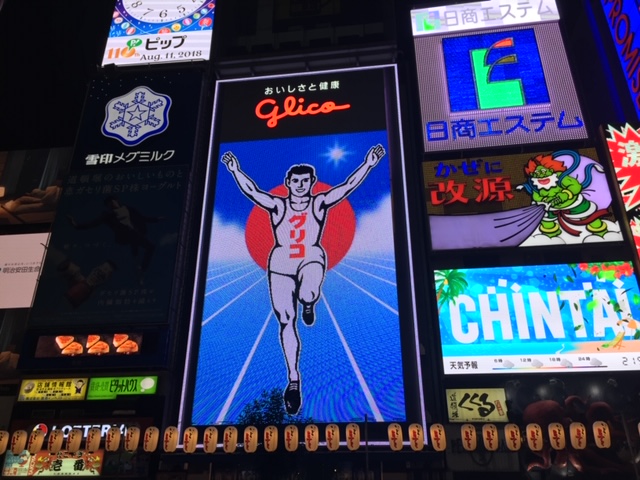 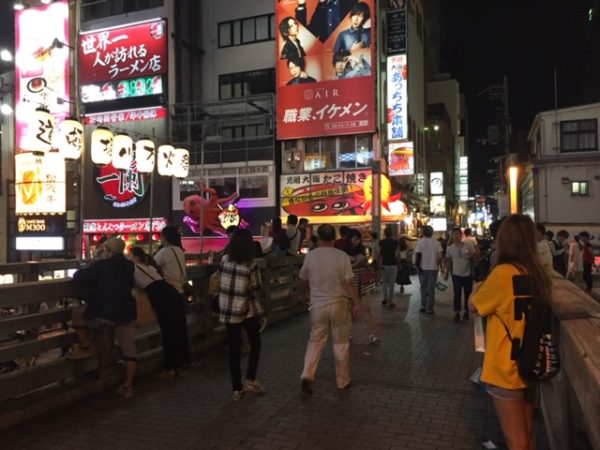 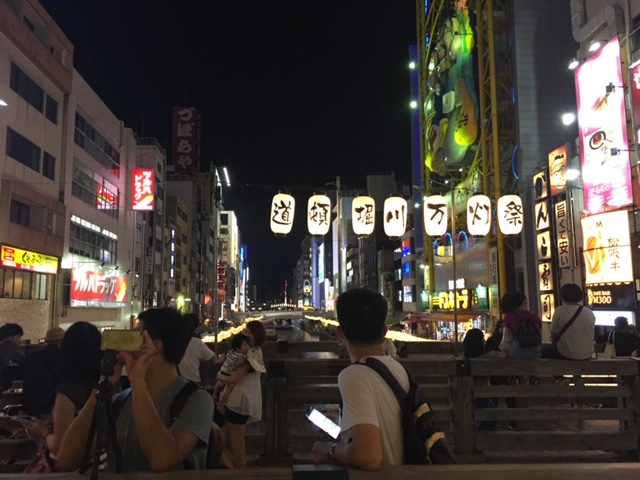 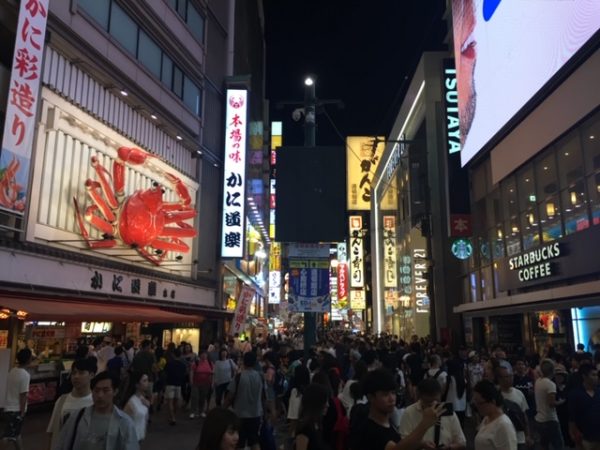 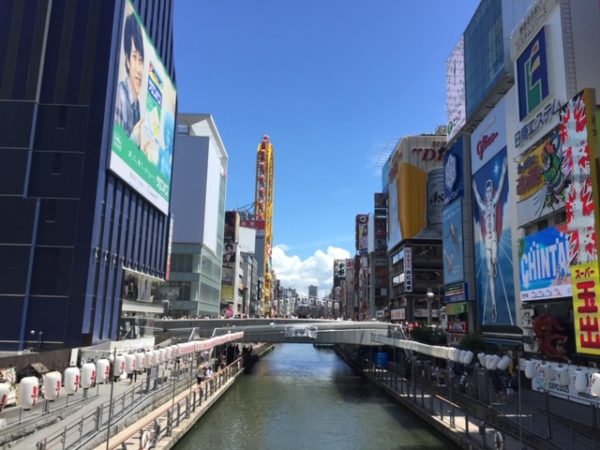 Language: Osakans use their dialect, and quite many people speak with a heavy Osaka accent. What is unique about this dialect is that native speakers of this dialect refuse to use standard Japanese, even when they are not in Osaka. 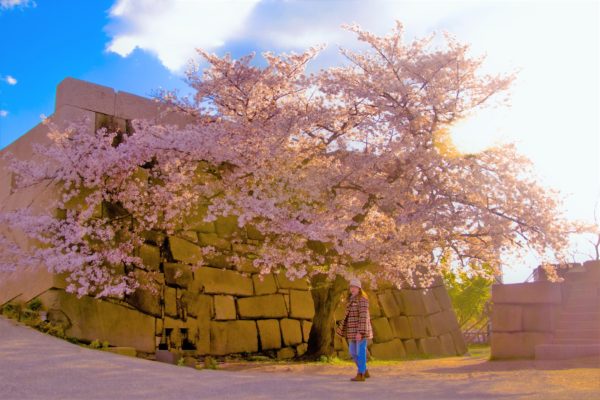 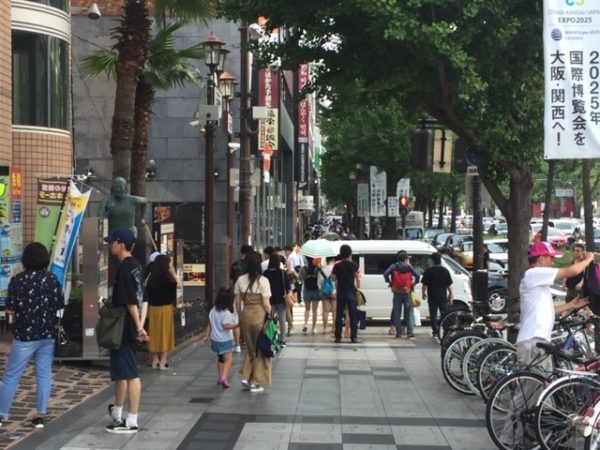 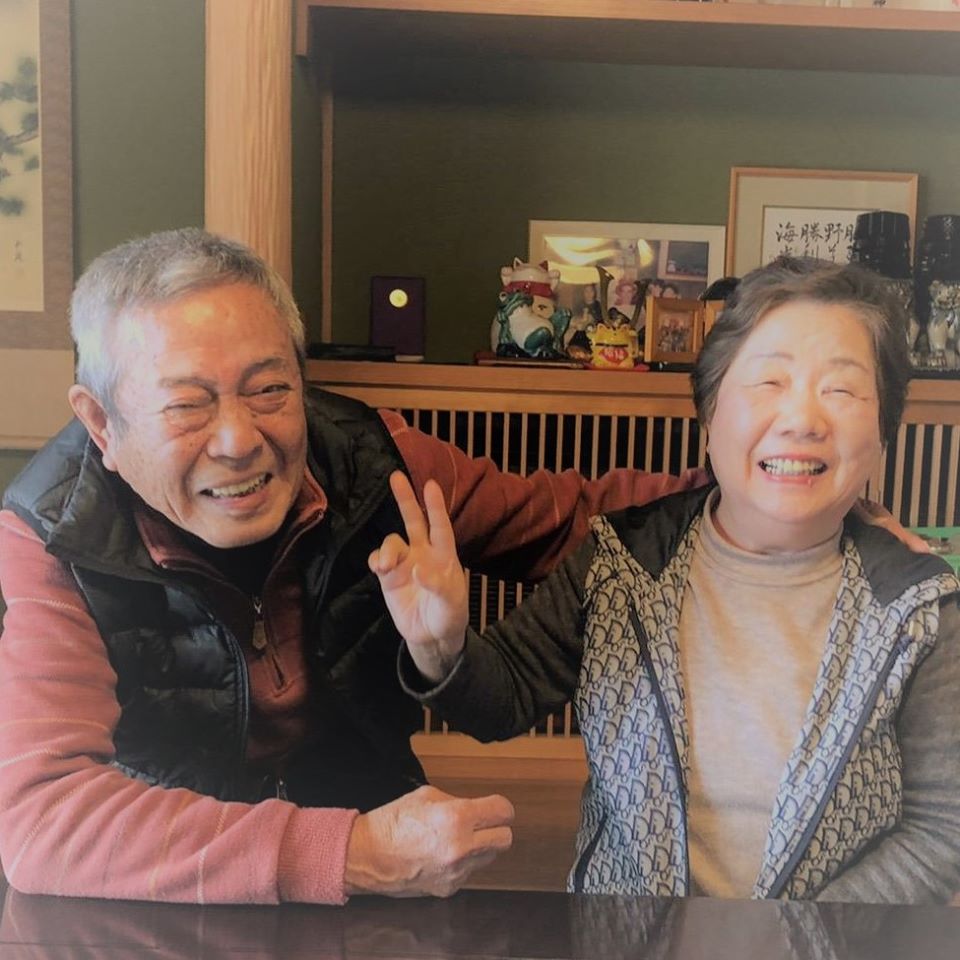 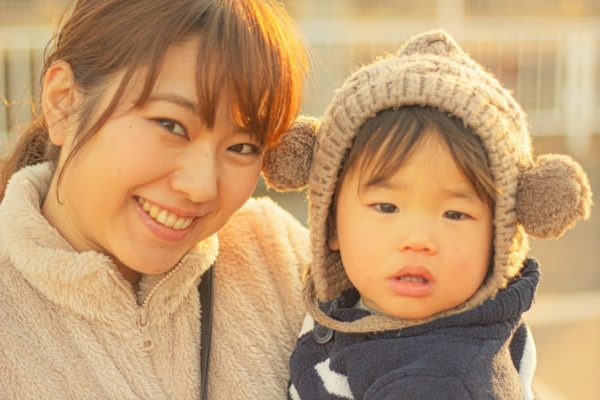 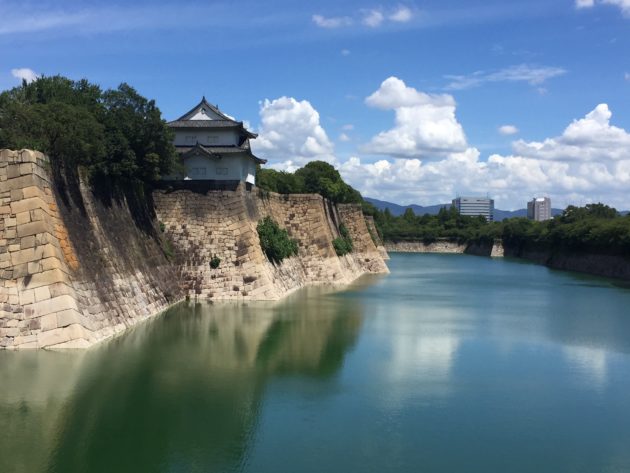 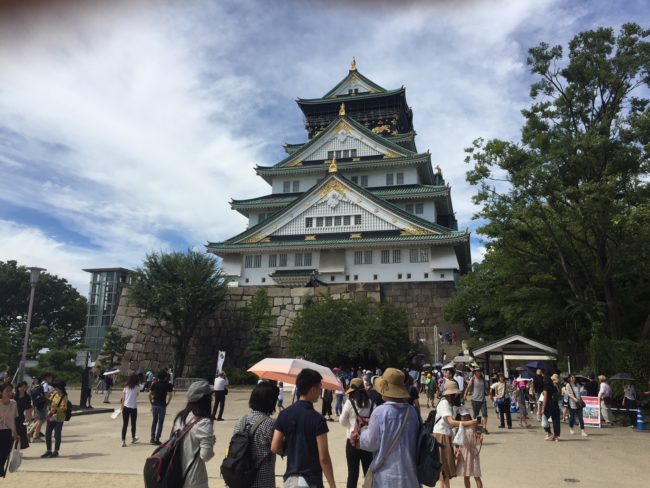 Walking through Doguyasuji, I found myself in the Akihabara of Osaka, Denden Town. In the past, its main profile was electronics, and related stores, and today, like in Akihabara, it is shifting from electronics to anime, computer games, and products related to this subculture.

So in addition to the remaining electronics stores, there are more and more stores selling cosplay supplies, bookstores selling dōjinshi, a maid-café (a cafe where they are dressed as maids.) I also looked at a couple of similar stores (not the maid café, but the cosplay-manga store). Well, I don't know, maybe I shouldn't say this, because I'm basically speaking out against myself, since I also got to know Japan through anime/manga, and I'm still writing at a major magazine which profiles mangas and animes, and I proofread mangas, but somehow I had a kind of discomfort when I went into a few of these stores. Somehow, this level of passion isn’t my cup of tea. Let’s just say I’ve never had the level of fan dedication necessary to dress as my favorite player or go as for them to a karaoke tournament, for example, or scream and yell my favorite slogan, pet name, or whatever…

Nor are they all very young, some are essentially middle-aged men or young people who practically glow with obsession – it’s almost scary. As an extra garnish, the young fangirls… and an unconscious amount of fan junk, at unconscionable prices. Plus there’s some really bizarre merch. A Shingeki no Kyojin costume, for instance, allows you to dress up as a giant with the help of a variety of pajamas. Anime girly “hug pillows” - a long (almost human-height) oval pillow with an anime girl printed on it… a mouse pad that has breasts (again with an anime girl printed on it)… in a word, a rather crazy world. We’ll see what Akihabara will be like, I may see even more warped things, but in a word, the point is, I felt like I didn’t belong here. I still read manga, and if I have an interesting anime, I'll check it out, but to me, even the Western idea of fandom is a bit intense (don't get me wrong, no offense, it's a personal opinion – if you want to be a fan, be a fan), but this is Japanese otaku is really something else.