1. When we avoided the tourist crowd by visiting the Kiyomizudera temple early in the morning - we could enjoy an extraordinary ambiance

2. The gardens and parks of Kyoto are meticulously well-kept - nowhere else in the world, I have enjoyed gardens so much.

3. Locals seemingly dislike the tourists, but at least they looked into our eyes, unlike the Tokyo people.

4. The terrace of an unusual Starbucks Coffee, the Kyoto-Sanjo-Ohashi, where we admired the Kamogawa river and its bridge

5. The panoramic terrace of Shogun Mound at the Seiriyukan temple - nice view on Kyoto

1. Frankly, after visiting the fourth or fifth temple, we had about enough of running in the next temple.

2. At the most frequented tourist sites, we were unable to make any decent photos because visitors and their selfie sticks were always seen in the shot.

4. The view of the dry riverbed (in summer only?) is somewhat depressing, spoils the atmosphere of the riverside restaurant terraces. 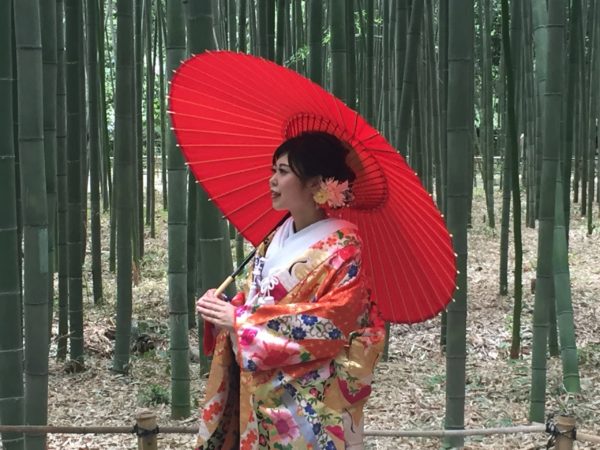 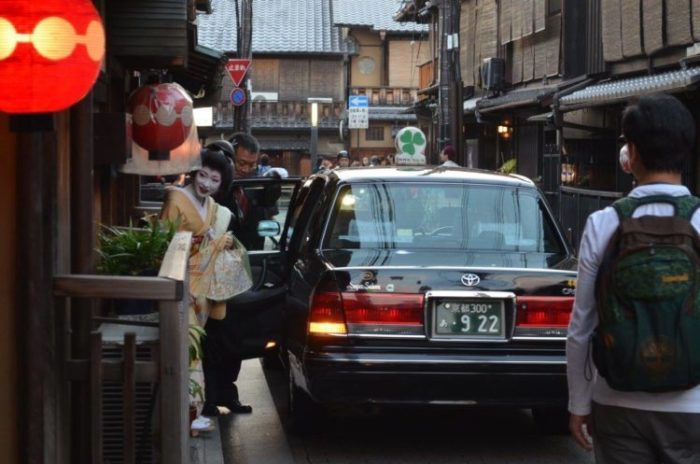 ,, For the Japanese people, Kyoto is the heart of Japanese culture. For the visitors, Kyoto's (or at least some parts of it) is a place as they imagine traditional Japan to be. The city lies in a picturesque valley surrounded by mountains."

“We totally overdosed on Kyoto. This is a city with temple forests, its own bamboo park, Japanese-style rafting, fake geishas – we even got cherries. On the other hand, we avoided like the plague those crowded streets near the temples, where everyone dresses like they’re in a masked ball.
Kyoto is the celebrated center of traditional Japan. At first glance, it wasn’t completely clear why there’s so much hype around this place – even though it was the capital of Imperial Japan for more than 1,000 years.

After drinking a Illy mocha latte (after a lot of swill, finally a decent coffee!) at Kyoto Station, which is lost in the middle of an enormous shopping mall, we set off towards our accommodation. On our way we saw a lot of the same kind of anonymous, gray apartment buildings you see in every country.

Kyoto Tower didn’t look too appealing either, and even the buds on the cherry trees, ever closer to erupting, didn’t set the city off. Then, like the famous sakura, Kyoto blossomed for us.

The city is famous first and foremost for its religious monuments and geisha culture. It’s a big city, though not massive by Japanese standards: about 1.5 million inhabitants. The sights are spread across a wide area, and include some 1,000 Buddhist temples, 400 Shinto shrines, beautiful gardens, palaces, as well as the Gion geisha district, where geisha are trained in a closed world off-limits to tourists. Still, we’re permitted to stroll among the beautiful temples, and the wooden machiya houses from the 17th century. Many of these are now shops, tea houses or restaurants which cater to tourists, where you can eat a kaiseki, a traditional multi-course Japanese meal, at a pretty steep price.

Kyoto is one of the most touristy, expensive places in Japan – you can get accommodation in nearby Osaka for a much lower price.

Kyoto, the oldest, most elegant city, the imperial seat, which for a thousand years was the nation’s capital, and where you can still see geishas walking the streets today. Unmissable.

Charmed and a little mystified from the first moment. The city is on a much more human scale than skyscraper-studded Osaka. It seemed smaller and more predictable, though our first expeditions into the city soon disproved this.

We took a bus towards the center, and got off on a street that looked pretty central, then started back. We admired, pointed, and took plenty of photographs, and when we spotted a park-like place where many tourists were standing about, we decided to go in too. We exactly we were, however, we never found out during our two-hour walk, nor even what the function of this space might be. We just walked about, relaxed and admired the scenery.” (2016) 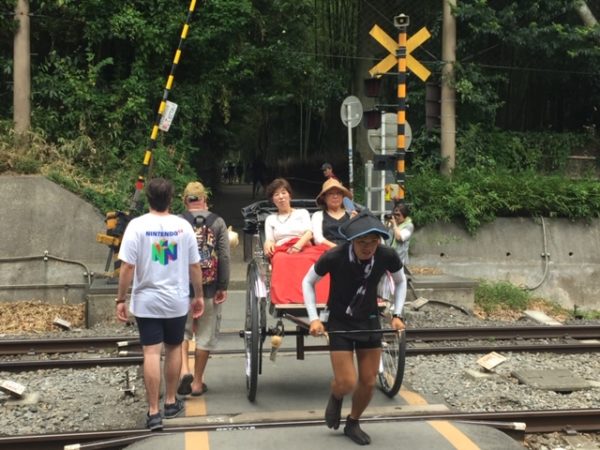 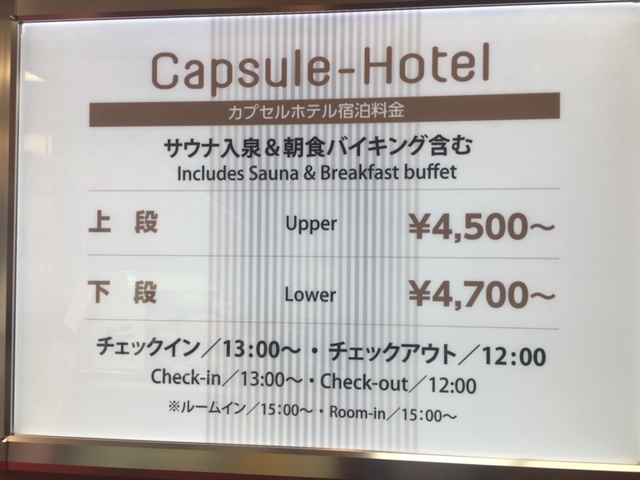 On weekends, hard to find a free table in popular restaurants without a prior reservation.

“After our horrendous culinary experience at lunch, by evening we were determined to eat something nice, and at least some sushi. In Kyoto, however, finding a sushi restaurant proved harder than we had expected. There were heaps of restaurants, and all looked excellent, but none was quite what we were looking for. Or, if we finally did find something, it was wreathed in cigarette smoke so thick you could cut it.

Finally, we found the sort of place we had in mind. There were a few tables and a long bar, where we could sit in the manner we’d already grown accustomed to elsewhere - sitting side by side, facing the sushi master at work on the other side of the bar. We didn’t stint when it came to ordering – we even asked for some of the larger and more expensive items, in addition to the cheaper options.

A single piece of sushi cost 900 yen, or about $8. And what did we get for our money? The expensive tuna sushi was so soft and fluffy that it melted in our mouths, almost without chewing. Comparing the cheaper and the more expensive types, we could definitely taste the difference, but the good news is that we liked the cheaper, more characterful varieties much better than the softer, more expensive ones. Oh well, we aren’t true sushi connoisseurs yet, I guess – better keep practicing! 😊”

At an intersection we found ourselves in front of a little coffee/restaurant, so we decided to take a look at their menu. Do they really have charcoal-flavored ice-cream? No thanks. Oh, it’s actually made from toasted sesame seeds? Well, alright then. Tea-flavored ice-cream? If these are your choices, I’d plump for the charcoal.
Later, when were already sitting down, I decided to order a soup. This turned out to be large, expensive, and full of ingredients I was completely unfamiliar with. There was some kind of orange thing cut into the shape of a star or a flower (I guessed carrot, but the taste disproved that hypothesis) , pink (tofu?) slices, and rice noodles, which you can’t really go wrong with. The translucent broth, on the other hand, was absolutely delicious, and even the random vegetables that looked like weeds from the garden turned out to be fine. Encouraged by this (and seeing that I didn’t keel over dead) the others ordered one each, as well.” (2016) 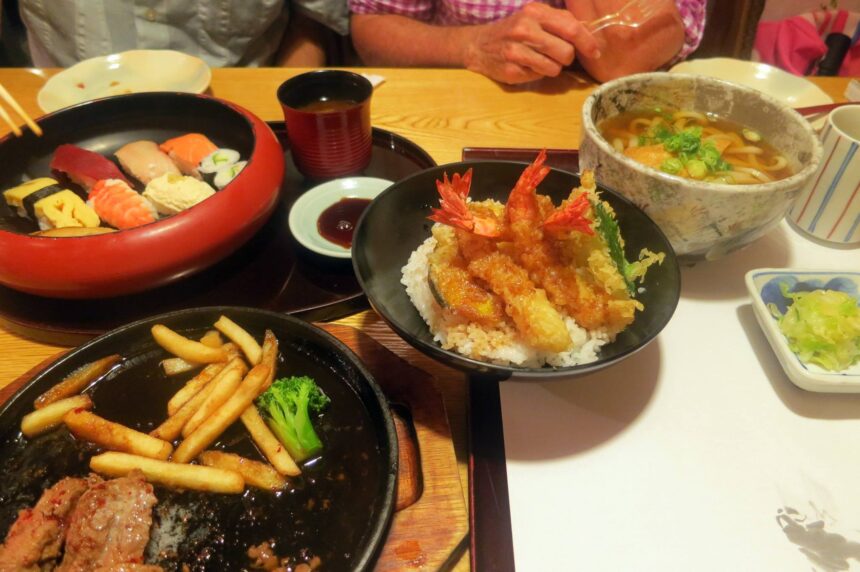 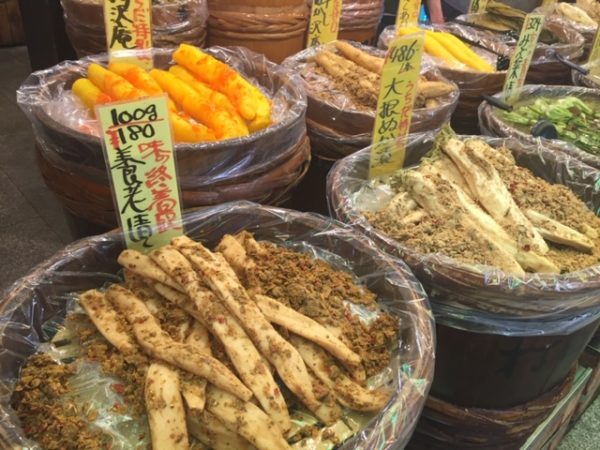 Pontocho is a traditional nightlife district of Kyoto. 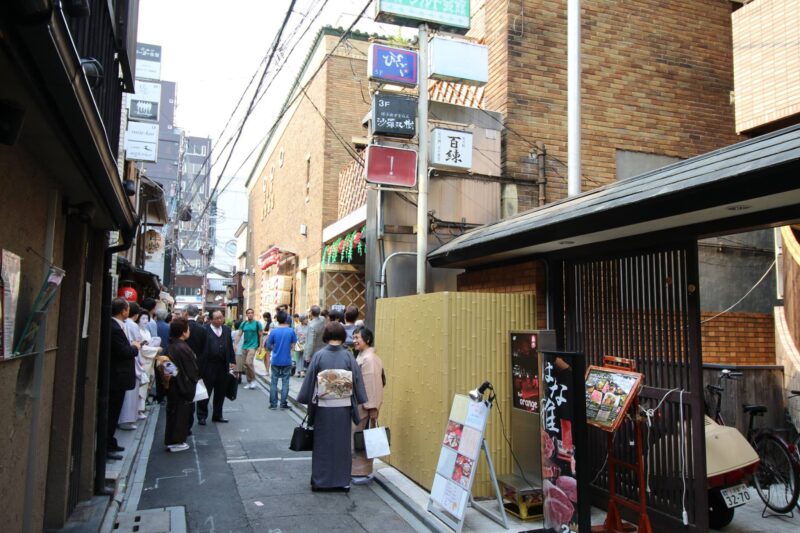 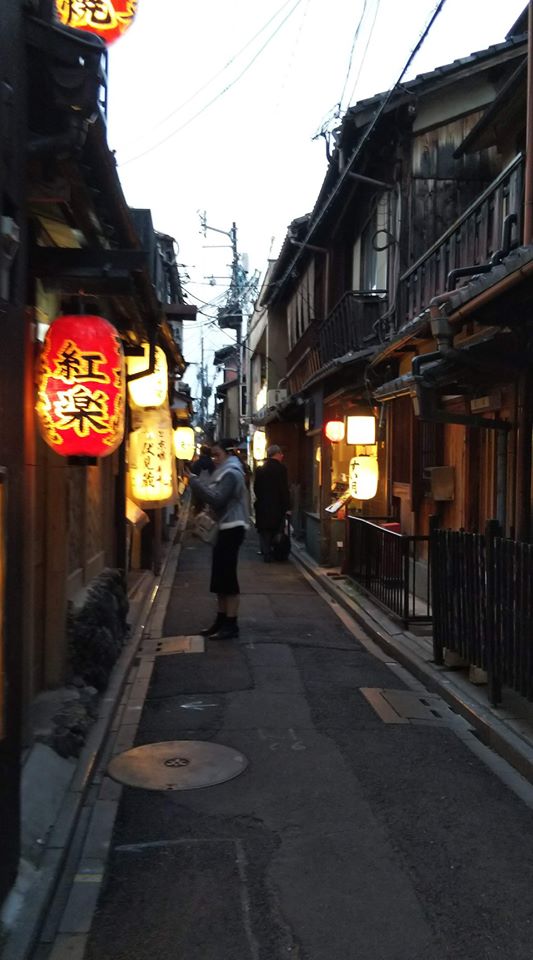 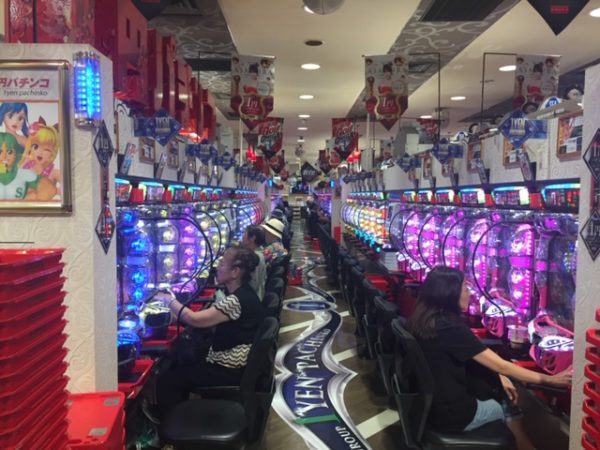 We coped quite well with the pouring rain since there are free umbrellas everywhere in Kyoto. I was quite shocked at how well the system worked, but it makes sense when you think about it. There is an umbrella stand in front of every public building, where free umbrellas are dispensed. If you somewhere and it rains you take an umbrella, and when you reach your destination you leave it there. There are always plenty in circulation since while you take one, someone is probably leaving one-off, so the umbrellas come and go. Of course, some people prefer to use their own, and these can also be left at the dispensaries, though in a locked case, so nobody else takes it. (2017) 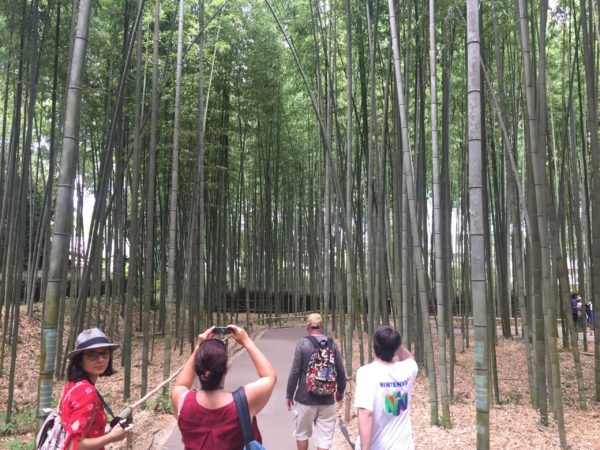 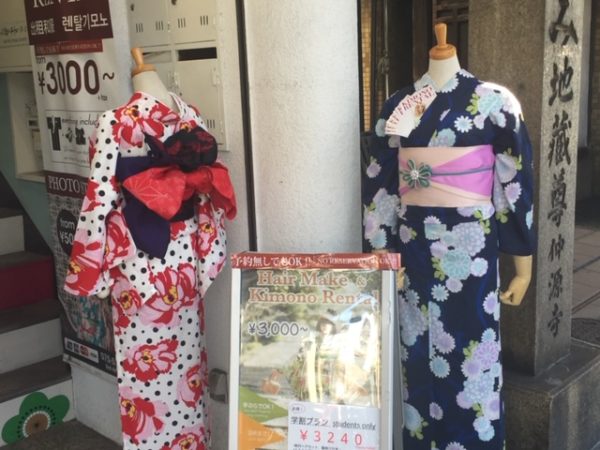 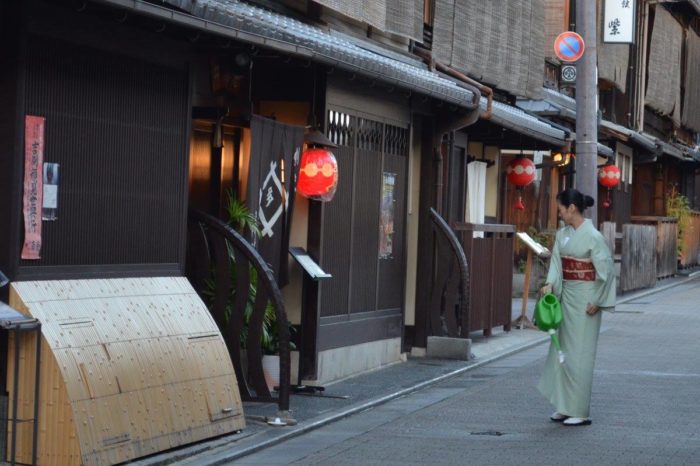 Kyoto means “the capital city”, and should not be pronounced “key-oh-toe” , but something closer to “kjo-to”

Local people are complaining about the massive tourist crowds. They call that: “tourism pollution” (kanko kogai in Japanese).

,,You can visit one new temple or shrine in Kyoto each day for four years and never step into the same courtyard twice."

Kyoto was once Japan's for a thousand years.

Kyoto was spared carpet bombing during WW2. It appears that the US Secretary of War, Henry Stimson played a critical role in saving Kyoto; he probably made that choice because he had visited the city before the war for his honeymoon. 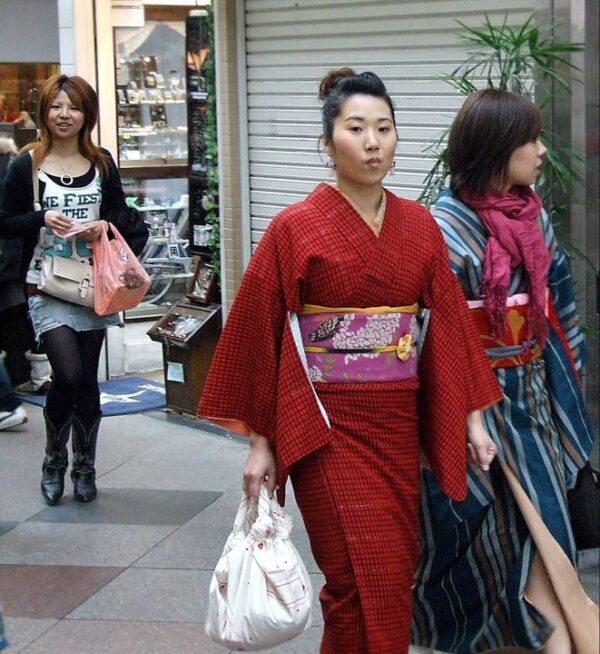 “Kyoto’s tourist management authorities have determined that foreign tourists do not respect local rules of conduct, and violate traditions. They have decided to make correct behavior known to visitors, in the form of pictograms.
Perceived infractions are especially common in matters related to hygiene, and colored pictograms have been placed in various parts of the city, such as vehicles and public baths. This is because Japanese public baths should only be entered after a thorough shower, but in many cases, foreign tourists do not take these rules seriously.

There have been other irregularities. For example, non-compliance with queuing in shops (queue jumping), wearing (women’s) hats or sunglasses in temples, dropping cigarette butts on the street, photographing Japanese people on the street or in public places without their consent, and – perhaps the greatest sin of all – stepping on a tatami mat in street shoes.

Drinking alcohol in public is prohibited, as is driving (or cycling) under the influence of alcohol or other drugs. These are punished by heavy fines, as is smoking in an indoor public place or on public transport. Consuming one’s own drink in restaurants, and touching or photographing the displays in museums, are also considered undesirable behavior.

Perhaps the most interesting warning, however, concerned the use of taxi doors. This is because the doors of Japanese taxis open and close completely automatically, so there is no need to force them open or shut, which foreigners generally try to do.

Attention also has to be paid to traditional Japanese courtesy. The word ‘no’ is completely missing from the Japanese dictionary. No Japanese person ever says ‘no’, or forbids anything so categorically. They never want to offend their interlocutor by rejecting or prohibiting anything outright. However, they also do not want to see their centuries-old traditions destroyed before their eyes. Instead, they have made a lot of colorful warnings for otherwise welcome tourists.” (2018) 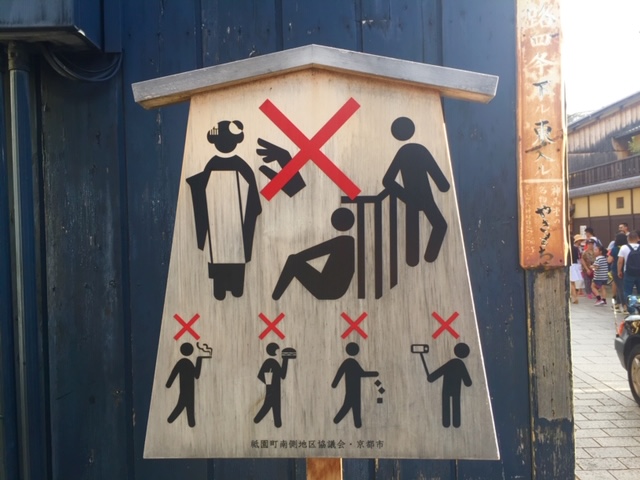 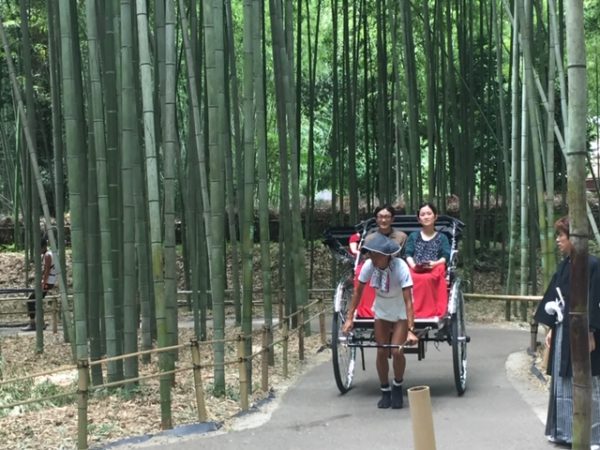 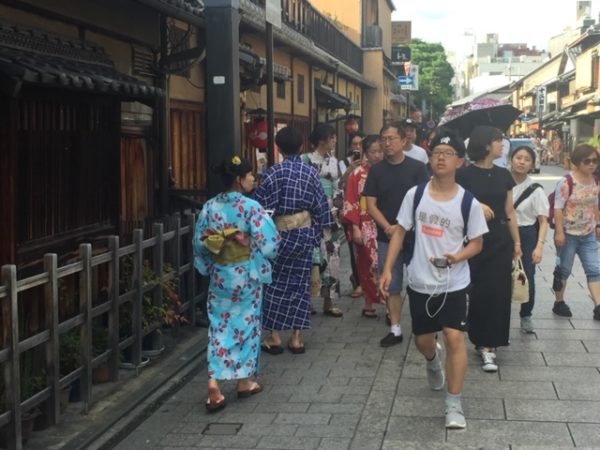 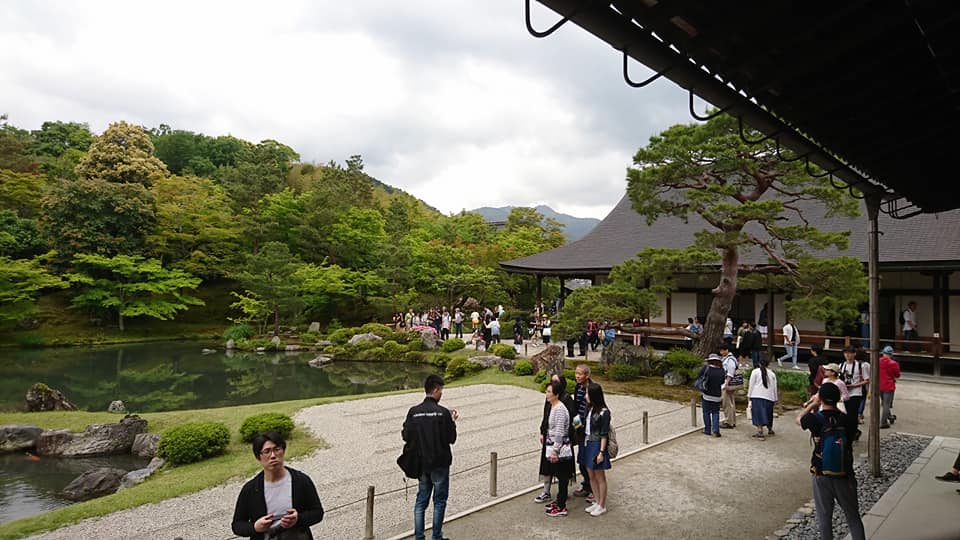 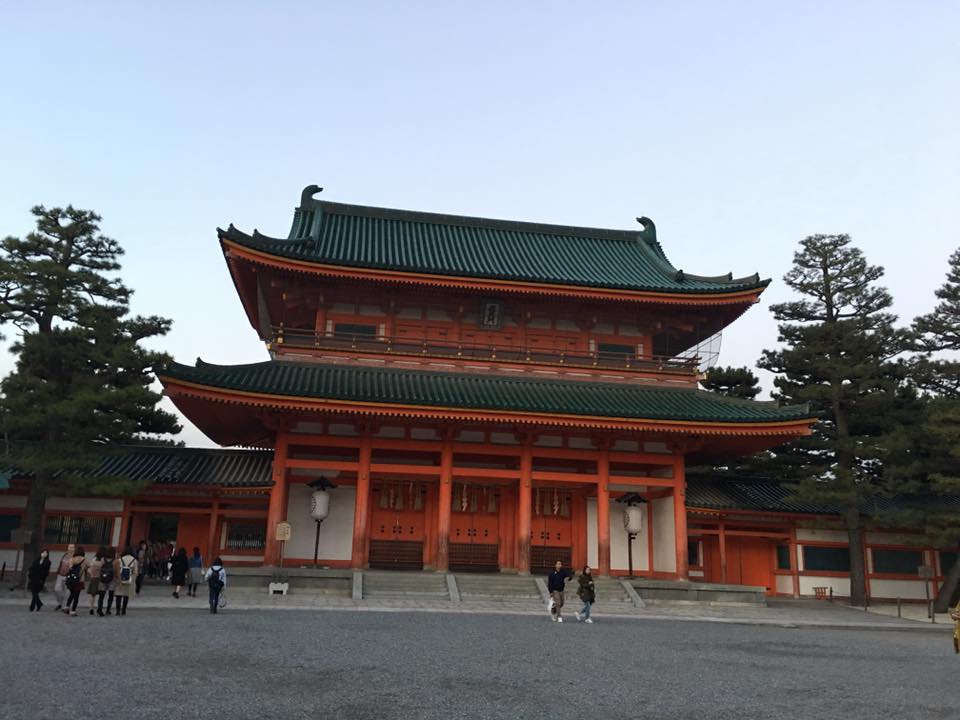 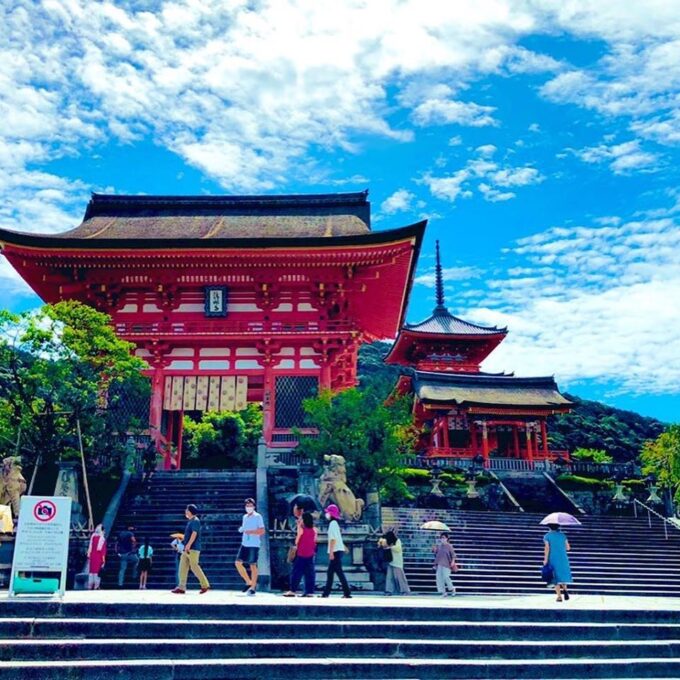 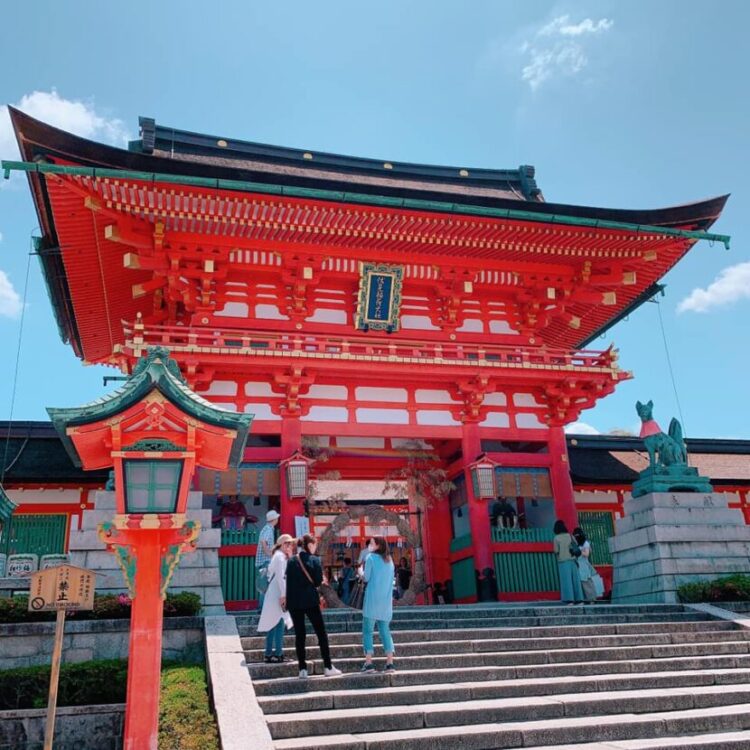 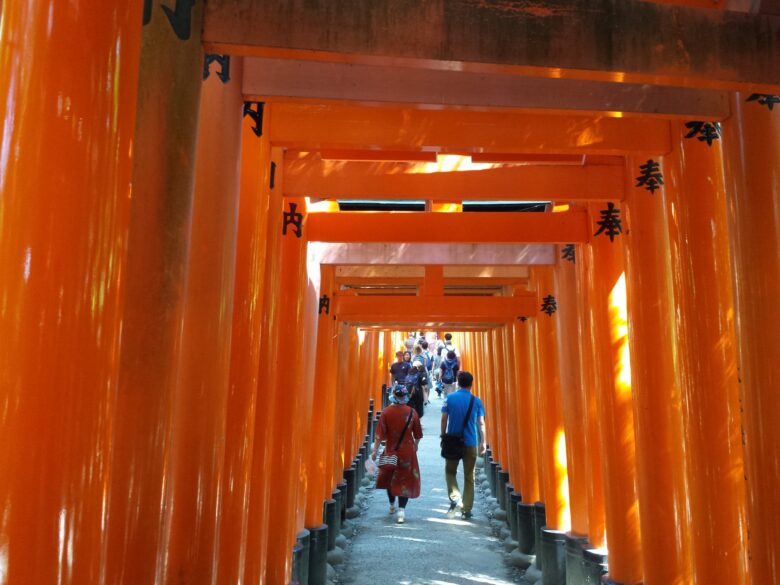 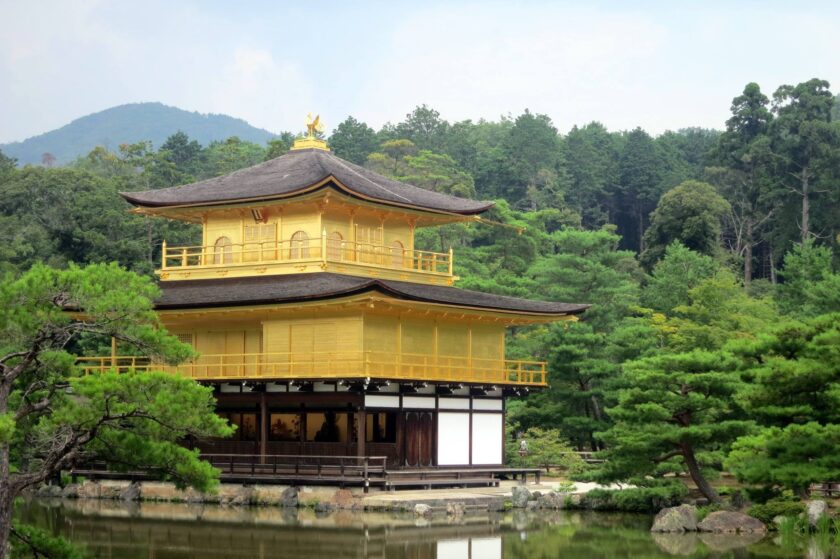