1. The spectacular mountains and ricefields in the interior of the island

2. Less tourist-crowded than Bali or the Gili islands

5. The enjoyable trek the Tiu Kelep Waterfall and the refreshing swim in the pool at the base of the cataract

1. Humidity on the ferry boat

2. The country roads are in poor condition, definitely not for inexperienced motor-cyclists

3. Many times we had to give up swimming because of the risky undercurrents, especially at high tide

4. All the plastic trash pushed onto the beaches

5. The intensive construction of more mosques may signal that the tourism strategy plan to concentrate on having more Muslim visitors (?) 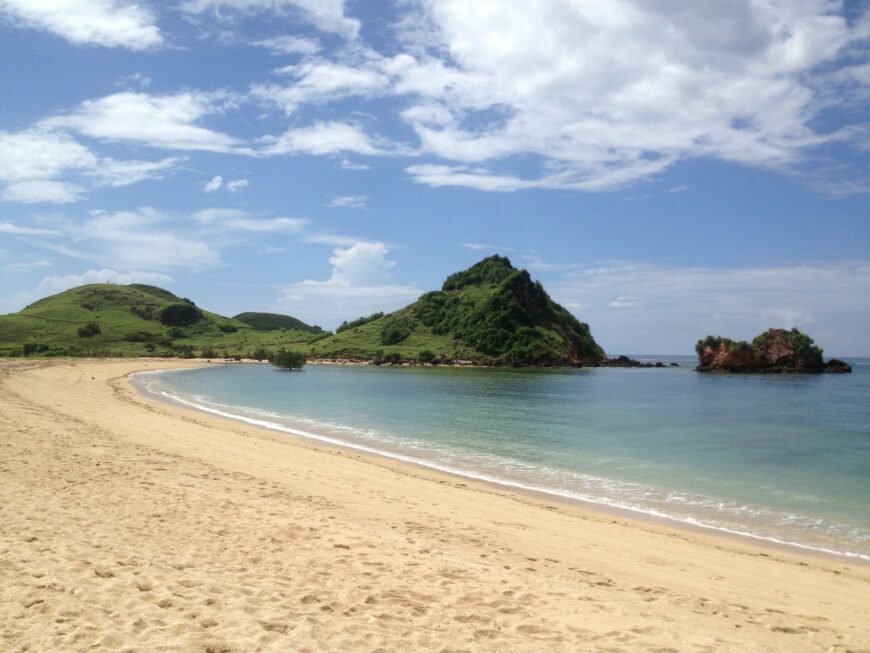 “Lombok is so good looking that if It was a man I’d marry it. Lombok is so rich that I’d seriously like to be its wife – it could give me almost anything. For me, Lombok is like Richard Gere was for Julia Roberts in Pretty Woman. All I have to do is picture Lombok, and the images that float before me already put me in a different state of mind. Lombok is a fairy tale, with azure waters, giant palm trees, gleaming volcanic asphalt, little roadside eateries, crystalline waterfalls, coral reefs, banana plantations, grazing animals, and spectacular views. (2016)”

It was immediately apparent that Lombok is much less developed than Bali, and far fewer tourists visit it. Everywhere we went – except for Gili – we hardly met other Europeans, and if we stopped somewhere to ask for directions, half the village gathered round to stare at us. The locals, when they spotted us, even yelled at us from the back seat of passing mopeds, always the same few English phrases: “Hello Misterrrrr!” and “yes!” or “yesno!”

“We didn’t read a single article that claimed Lombok as the new Bali, and I wouldn’t mention Bali and Lombok in the same breath, either in a positive or negative comparison. They’re simply very different. People’s faces, their dress, their beaches, their buildings… They’re all completely different. Only 10% of the population is Hindu Balinese, while the remaining 90% are Muslim. In this way, it resembled Gili Air. Another similarity was the fact that a significant part of the island is currently a building site.

Many people come to Lombok to climb the volcano of Rinjani, and to surf. We didn’t visit Rinjani because it was too expensive, and as for surfing, we decided that snorkeling and diving were enough water sports for us.
Of course, that doesn’t mean we didn’t hit it off with Lombok. For us, this island was all about the beaches, which were the best we saw on our whole trip, and the spectacular sunsets. We found some that were almost completely undiscovered by tourists – there were just a few local fishermen and us. It was unbelievable! Lombok is free of the great influxes of tourists which inundate Bali, and even the Gili Islands. Moped traffic is also calmer due to the lower levels of traffic and an almost complete absence of police. In the south, at least, that was our experience.” (2016)

“There is a great, highway-like multi-lane road in the middle of Lombok, and it’s a dream to ride a motorbike on, but on the side roads it’s more like this: you grip the handlebars with white knuckles because there are new excitements around every corner – maybe water is flowing across the road in a torrent, or (again because of the rain) there has been a landslide, and the road is covered in a layer of wet clay, or there is a waist-deep ‘puddle’ in the middle of the road, or it is blocked by stray dogs, children, or even giant crabs (!). Or perhaps a dreamy shepherd will herd his flock out in front of you because he didn’t see you coming. In other words, this isn’t a place for beginner motorcyclists.” (2013)

The international airport of Lombok (LOP) is 30 km south of Mataram.

There are ferry connections between Lombok and Benoa of Bali, but also Surabaya.

“Lombok Kuta is a paradise for both surfers and swimmers – those kilometer-long, white beaches all run together, but my personal favorites were Seger and Tanjung Aan. The ocean is an almost unbelievable shade of blue, and there are coconut palms, bays surrounded by picturesque mountains, and toothless, grinning fishermen… it’s easy to wish you could stay here forever. I spent part of a day in the shallow water near the beach, and for hours I was unwilling to get out of that wonderfully warm water. In the end, the others had to ostentatiously set off back without me, before I could be induced to leave the water.

The only annoyance is the army of bracelets and sarong sellers who show up everywhere. The girls in our party began, in direct correlation with our consumption of rice wine, to purchase more and more sarongs from the old women and children – on average about one every three seconds. In the end, even Zbysek, who is famous for his even temper and patience, was so overwhelmed that he preferred to pay the extra for the private beach, to get away from these sellers. I suppose it’s not really such a surprise that I preferred the tranquility of the ocean to the coastal flea market…”

Unlike Bali with the Hindu religion, Lombok is predominantly Muslim. 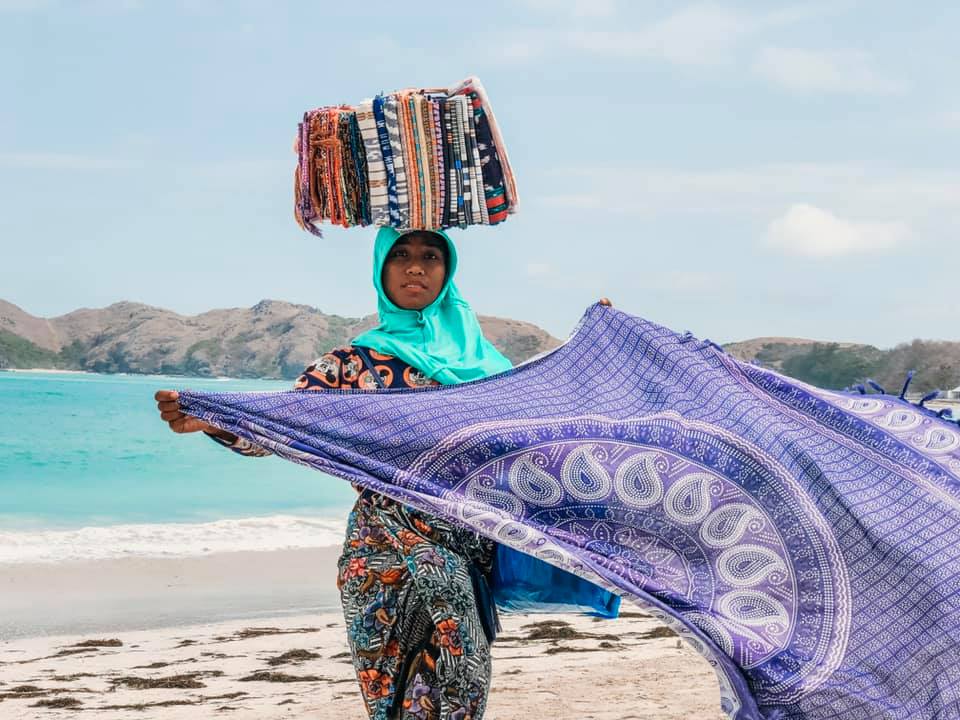 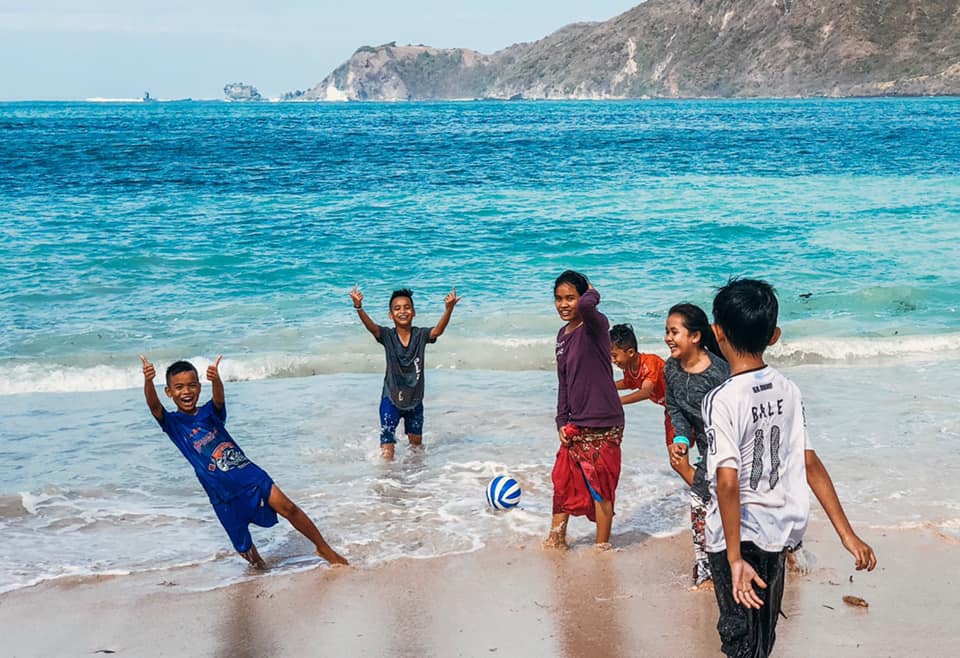 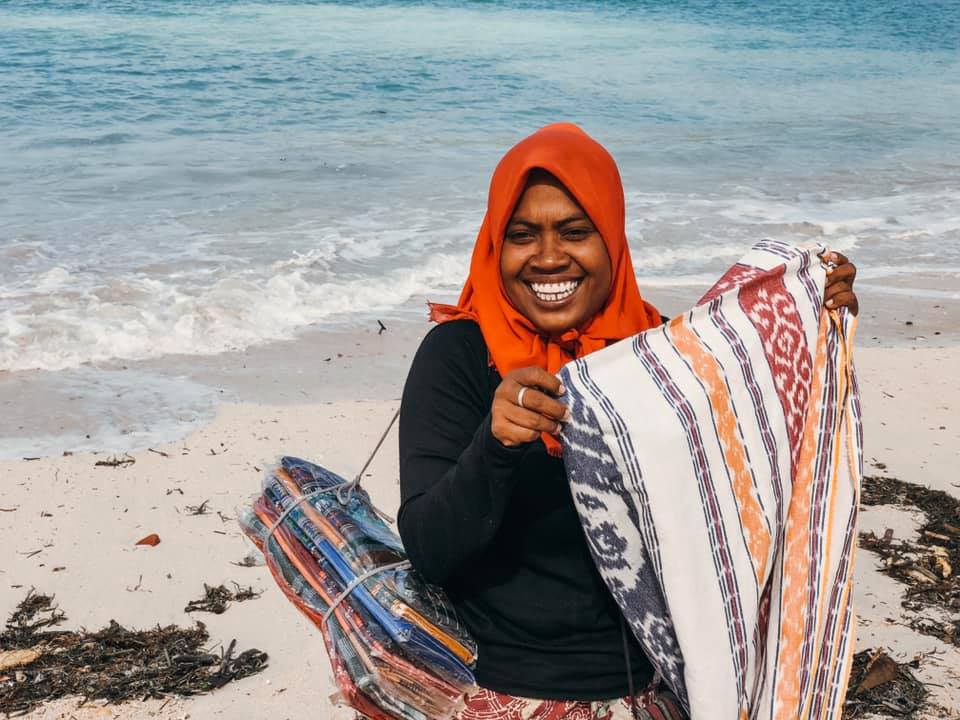 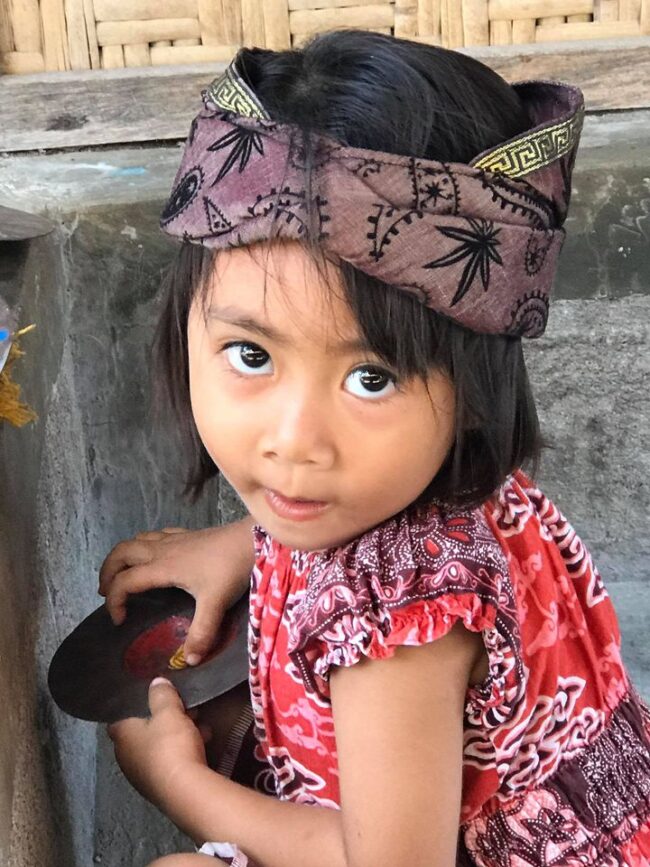 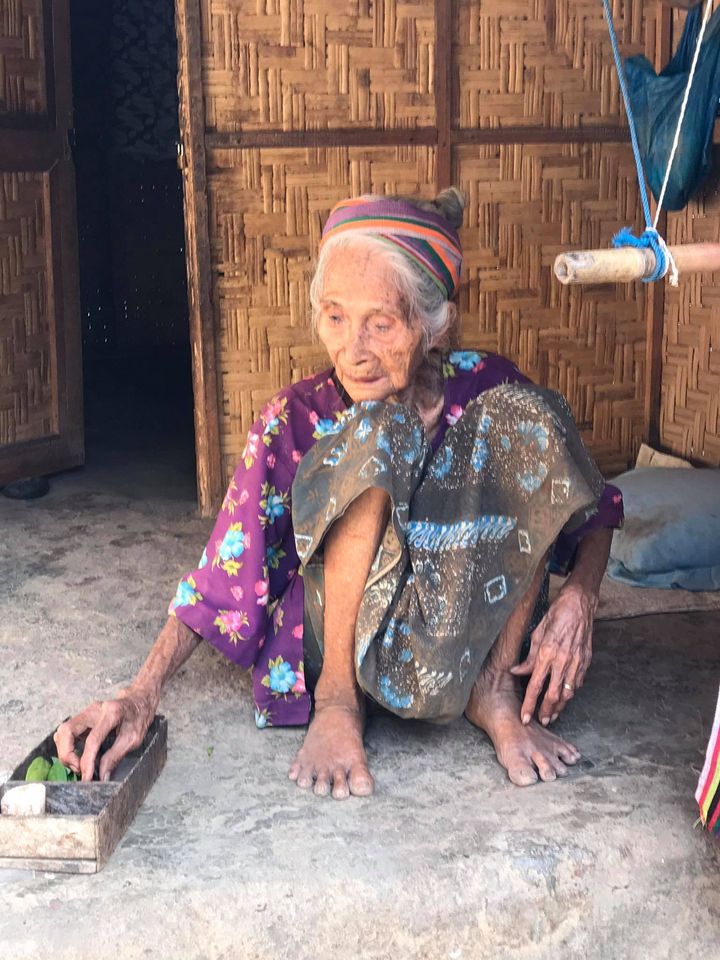 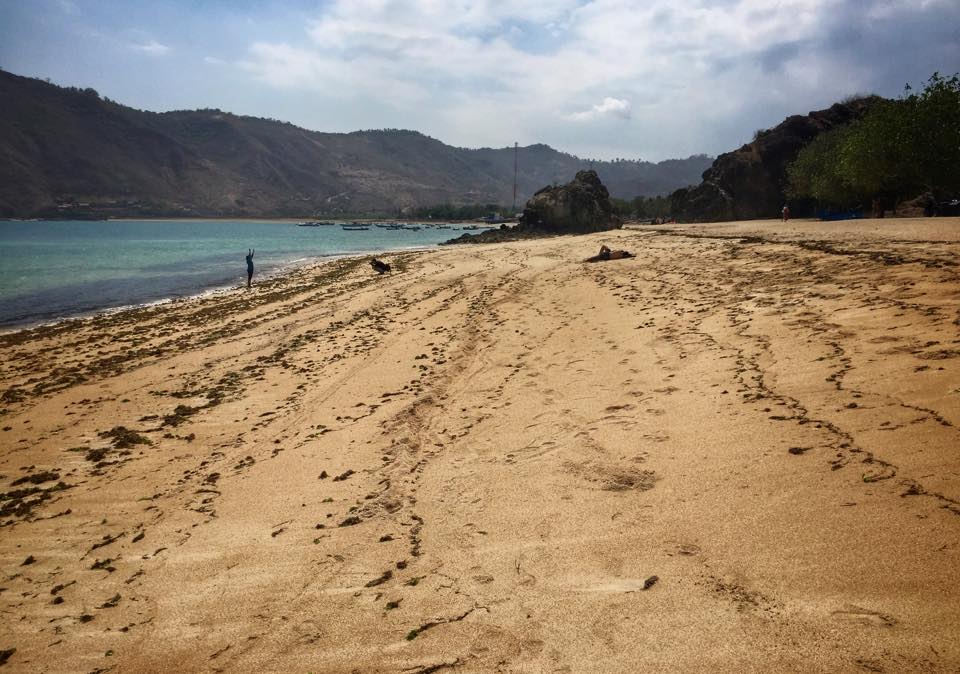 “The beach was pretty deserted in the part of Senggigi where I was – most of the other beachgoers were locals, and most of those were Muslim, meaning they didn’t go into the water, or if they did it was only fully clothed. It must be a strange feeling to sit next to someone in a bikini, and I certainly felt a little uncomfortable – I kept walking until I found two other women in bikinis, and sat down near them. I respect Muslims and accept that their religion entails a different set of cultural values, so if I visit their countries I have to adapt my behavior. Still, when it comes to the beach it does lead to a very uncomfortable situation, at least when tourists are not the majority, as was the case on Gili.” (2017)

“Seger Beach: without a doubt our favorite place. When we got there we didn’t even have to pay a parking fee, and they hadn’t built a single shop, restaurant or warung. This is a real undiscovered beach, where besides ourselves we hardly saw anyone except fishermen. It was also the most beautiful beach – at low tide, there are beautiful coral reefs for snorkeling, but at high tide, the current is very strong. We could barely make it back to the shore – not a mistake we made twice!” 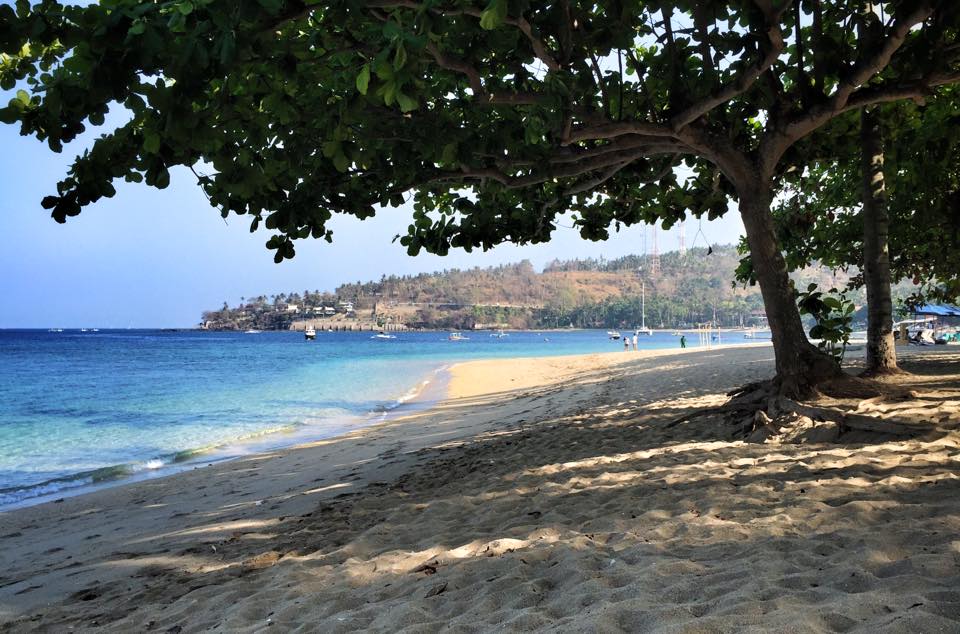