1. The colorful houses, and the surprisingly large number of parks and green spaces
2. Many locals speak English and Italian
3. The cafés and restaurants of the Blloku district
4. The surprising proportion of locals with great fashion sense
5. The Murat Toptani pedestrian street
6. The international airport really looks great
7. The Albanians, including those in Tirana, are extremely hospitable people

8. Jogging in the Grand Park (Parku i Madh) along an artificial lake

1. The polluted air
2. You have to haggle with taxi drivers
3. Foreigners driving either their own or a rented car in the city will find it hard to orient themselves using road signs – if they exist at all
4. The taste of the local liquor, raki
5. The total disregard of both drivers and pedestrians for all traffic rules. You always have to look both ways, even when crossing a one-way street.
6. The roads are bad, and street lighting at night is poor
7. It’s a difficult task for foreign tourists to figure out the bus timetable and numbering system

8. Many streets are unpaved and often dirty and muddy

“There are two real blots on the landscape in Tirana. One of the new mosques, lying half-finished since Erdogan froze his financial support, and which in any case the city needed like it needed a pocketful of dog doo. The other is that atrocious tower… it will never be finished, and everybody hates it. The sidewalks are closed around it, it’s repulsive, and it seems to be making no progress towards completion. ‘The shame of Tirana’, they call it, and I’d say with some justification. (t.a., 2019)”

Some parts of Tirana are modern and (comparatively) rich, while others are impoverished and dilapidated, and you can see both just a few meters from one another. The sights of Tirana are nothing very special, and as they’re all located close to one another, it won’t take you long to see them all. The atmosphere in Tirana, on the other hand, is fascinating: Picture a Mediterranean city, relaxed and yet buzzing with life, and with architecture so bizarre it’s hard to say whether it is meant seriously or as a kind of joke. What is the real face of this city? There are tall apartment buildings (‘skyscrapers’, as the locals boast) and run-down slums right beside one another. Then there are parks that lack absolutely nothing you could conceivably imagine in a park.
The cafés are great, and almost laughably cheap, while the food in the restaurants is first-rate. What I want to emphasize is that the appeal of Tirana lies not in its rather mediocre sights, but in its unique atmosphere, which you won’t find anywhere else in the world.
You can see the city center in half a day if the weather is good, so if you’ve got the time it’s worth taking a trip to the mountains. There you can go hiking, or even take a horseback trip through the hills.
If you’re not in a hurry, it’s great to experience the local atmosphere by spending a day or two just sitting in good cafés and people-watching. The food is good and cheap, so it wouldn’t be hard to stretch this pleasant laziness out over two or three days if you had the time.
Those who prefer to avoid touristy places, and who want to experience a truly unique destination, can find it all here, and at an unbeatable price. There’s nothing unmissable among Tirana’s sights, but I’d still highly recommend visiting. (2018)

,, Tirana, the capital is fashionable, there’s a ton of green space, and loads of colorfully painted houses and buildings. Tirana is one of the only European capitals without a Mcdonald's (another is Vatican City, I’m not sure whether this has anything to do with loaves and fishes or not). Whatever the reason not having a Mcdonald's can only be a plus as it encourages people to eat real food. However, if you find yourself craving an American-style hamburger, check out Kolonat, an Albania fast-food chain that has a logo suspiciously similar to McDonald’s, the burgers are infinitely better though.

Skanderbeg Square is the heart of Tirana, it’s colorful with pedestrian streets in which there are bars, restaurants and even interesting Ottoman remains. (Alan Durant, 2020)

------------------------------
“Tirana is not a beautiful city. The traffic is terrible and many ugly buildings have survived from communist times. The main sights are concentrated around Skanderbeg Square. Positives? The many pleasant cafes and confectionery stores.” (B.l, 2019) 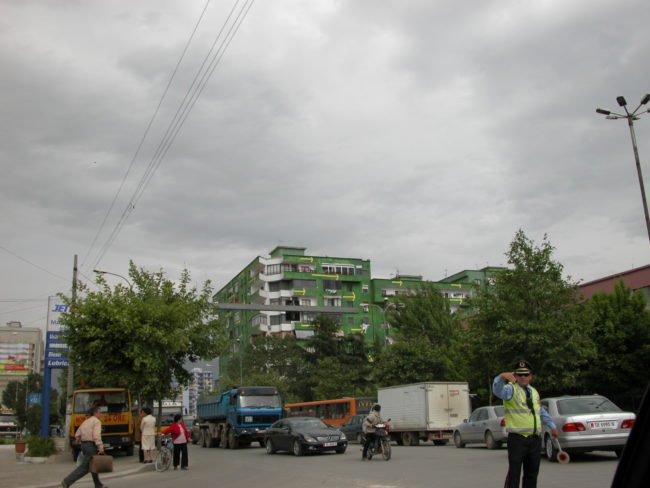 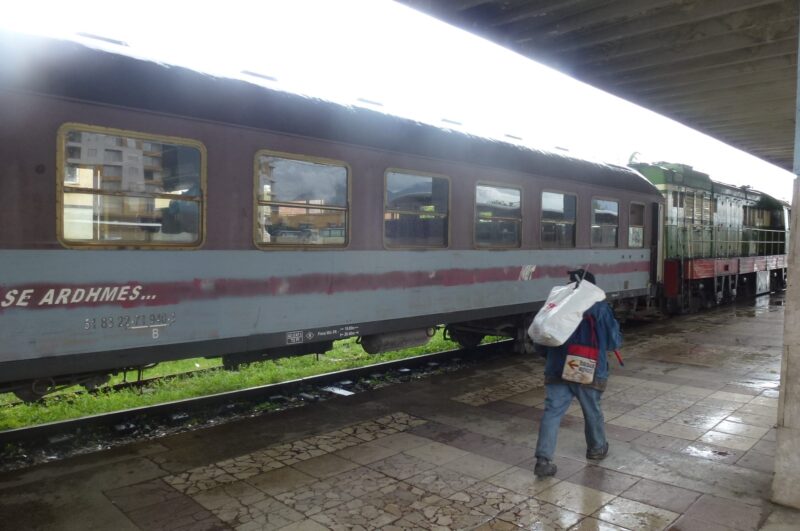 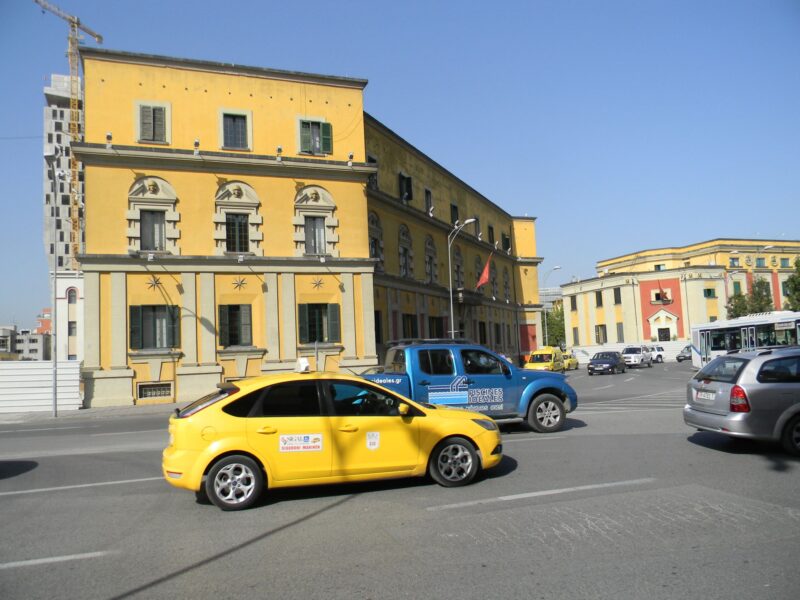 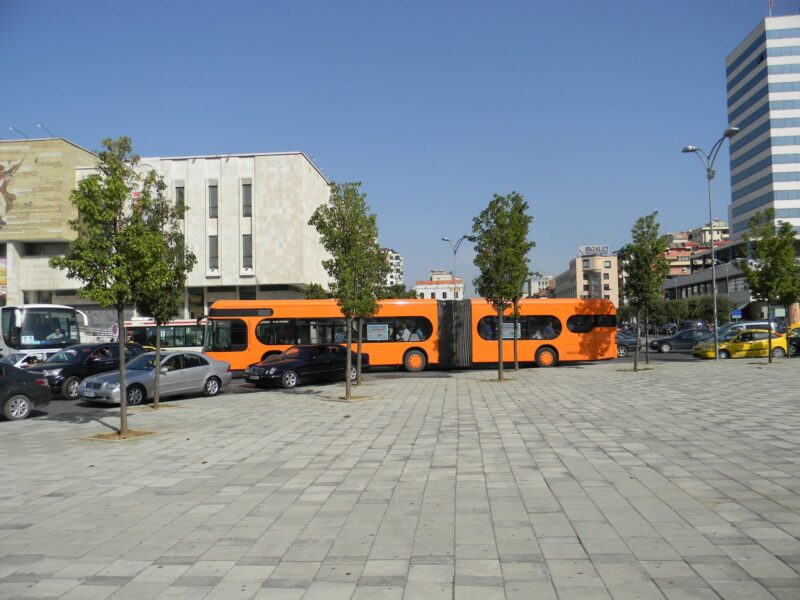 “The Rinas Express bus from the airport runs every hour from six in the morning until six in the evening. The ticket costs 250 Albanian lek. For this price the bus takes you right to Tirana’s central square, where you can see all the most important sights. 😊 You can buy the ticket on the bus.

The return journey: If you’re going to the airport from the city center then it’s very practical – that’s where the bus leaves from. Don’t worry, there will be plenty of people waiting by the roadside, and the buses arrive frequently. While you’re waiting, why not drink one last Albanian coffee! (2018)”

“From a driving point of view Tirana isn’t too scary, but there are lots of traffic jams, and often no road markings (there’s such a mass of cars that they hardly fit into the city – a (theoretically) three-lane road might in practice have five lanes. Can make driving a bit more of a puzzle…

There’s only one rule: whoever’s less scared goes first 😊 I wasn’t worried for my hire car, but the owner of a beloved Mercedes cares for his, especially if he traded in his donkey for it 😉” (B.B., 2019) 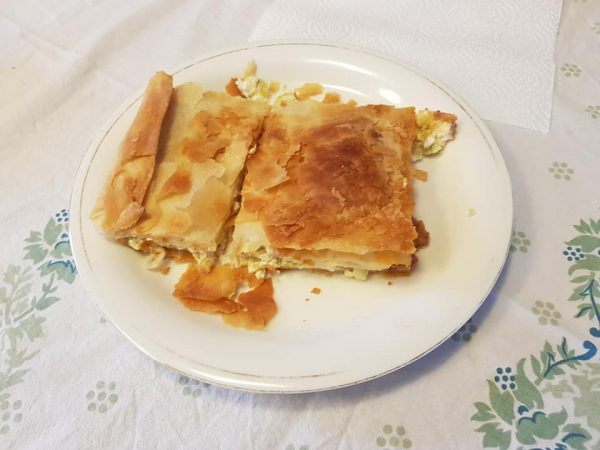 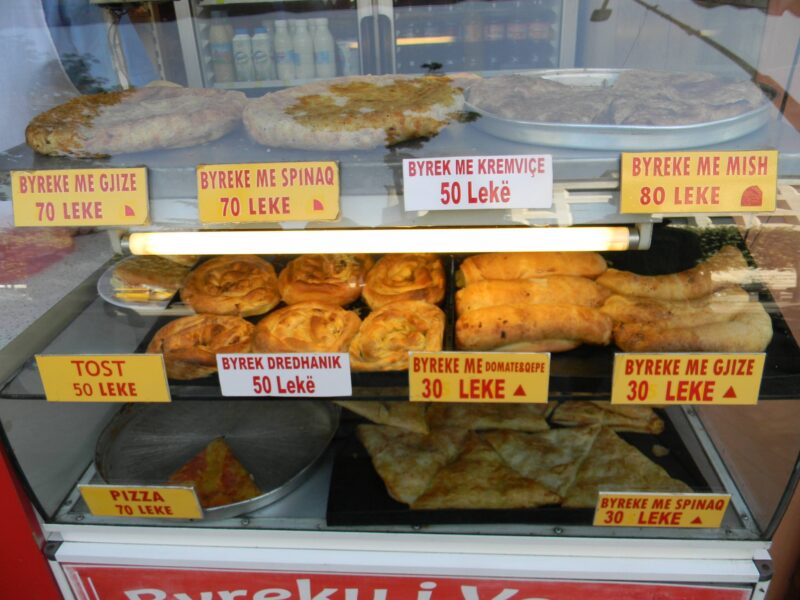 A recommended place to change money: a company called Iliria’98. They have branches all over Tirana. For instance they have a branch inside the Taiwan center. Their exchange rate is pretty decent, competitive, and safe. The cashiers always give a receipt. Warning: avoid the illegal on-street money exchange dealers.

Better avoid exchange in Tirana airport terminal, because the exchange rate is disadvantageous. Anyway, you can pay the taxi and bus in euro.
.

The biggest shopping mall is the Tirana East Gate (TEG).It is located right outside the city (Lundër), and it is enormous. There are 3 floors with diverse shops. Parking: underground and outside. You can take a bus from the center. The mall is equally trendy for its bars, a popular place to chill out. The mall offers playgrounds for children, so it is family-friendly.

A new club, the Top Hill, where Dua Lipa (parents Albanians) performed. That club is located 5km from the center of Tirana. It is open 11. p.m. to 6 a.m, on the weekends only. 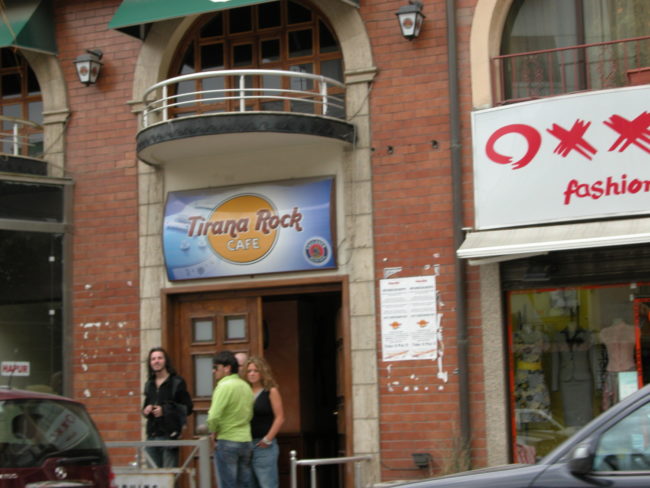 “Don’t break a leg! The Albanians don’t seem to be fans of street lighting, and there are many large potholes in sidewalks and driveways, so be particularly careful where you’re walking after dark, but you could easily twist your ankle during the day too. I’m totally serious! Always watch where you’re putting your feet! Especially in Tirana! (2018)” 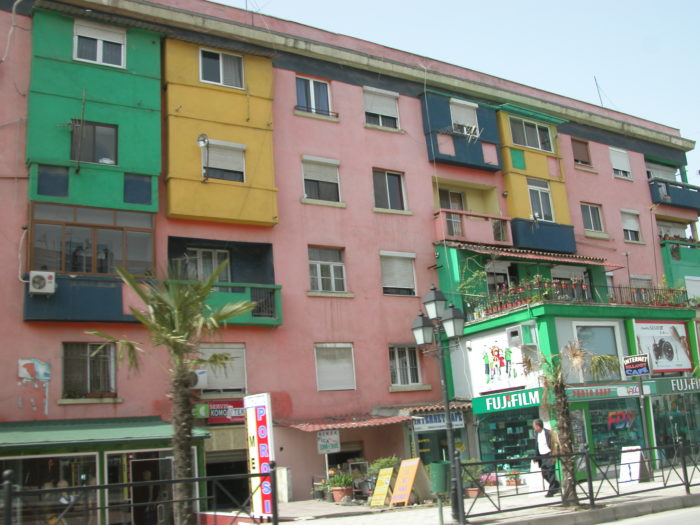 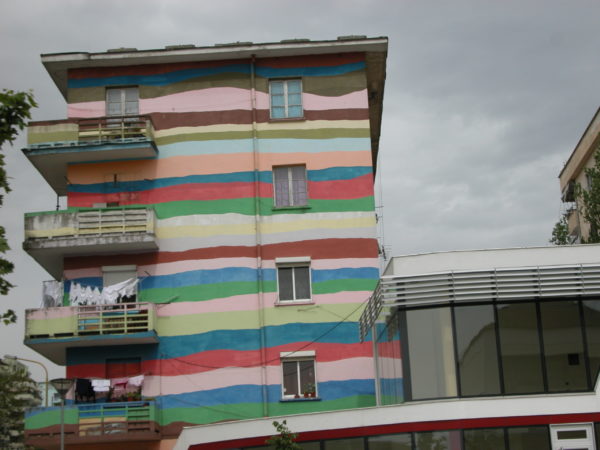 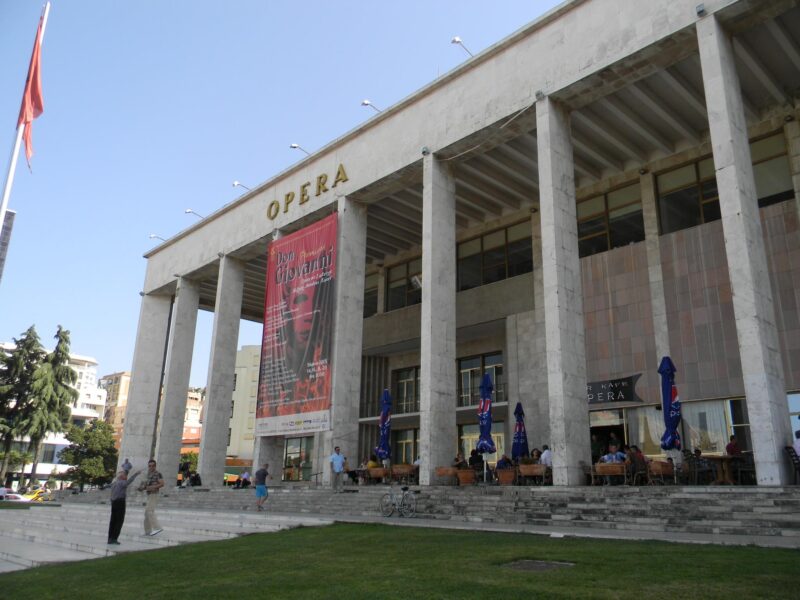 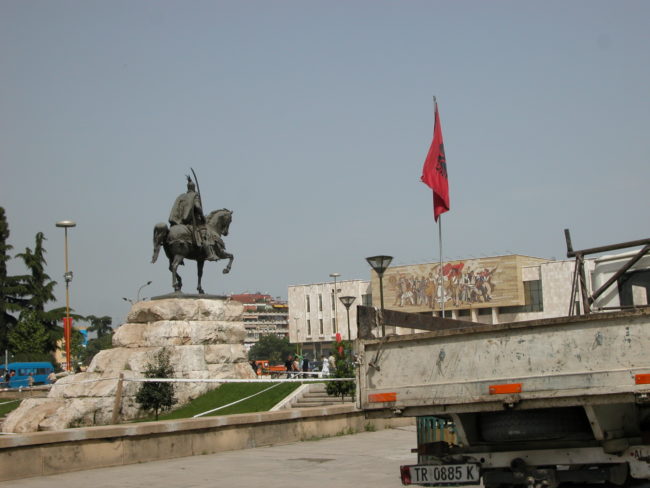 Tirana - The Skanderberg Monument and the Palace of Culture in the Skanderberg Square, the main plaza in the center of Tirana - Krista photo

A substantial portion of the movie War Dogs (2016) - starring Bradley Cooper, Jonah Hill, Miles Teller - takes plays in Tirana (but was actually set in Romania). Albanian viewers felt somewhat disappointed with that movie because one of the Albanian characters featured in it speaks unduly Romanian instead of Albanian.

1. After dark, there are remarkably fewer women who are walking in the streets. 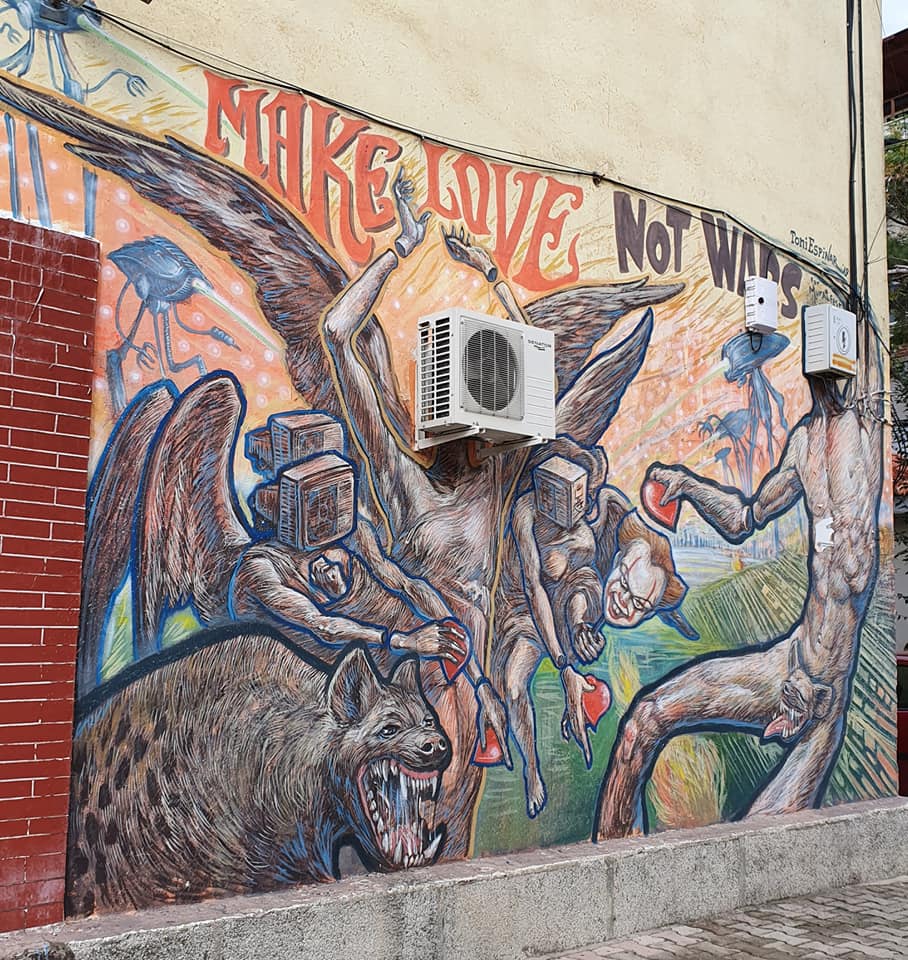 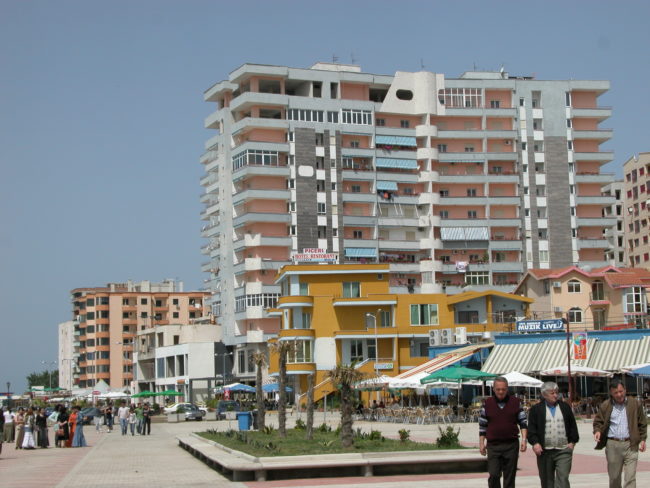 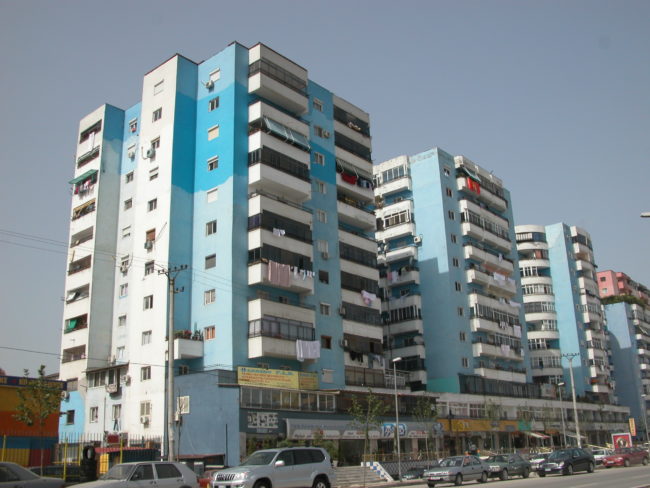 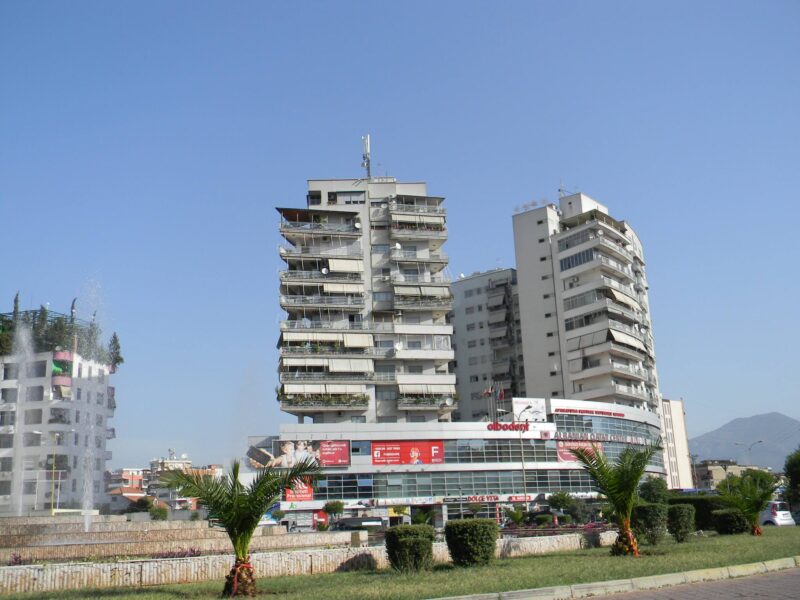 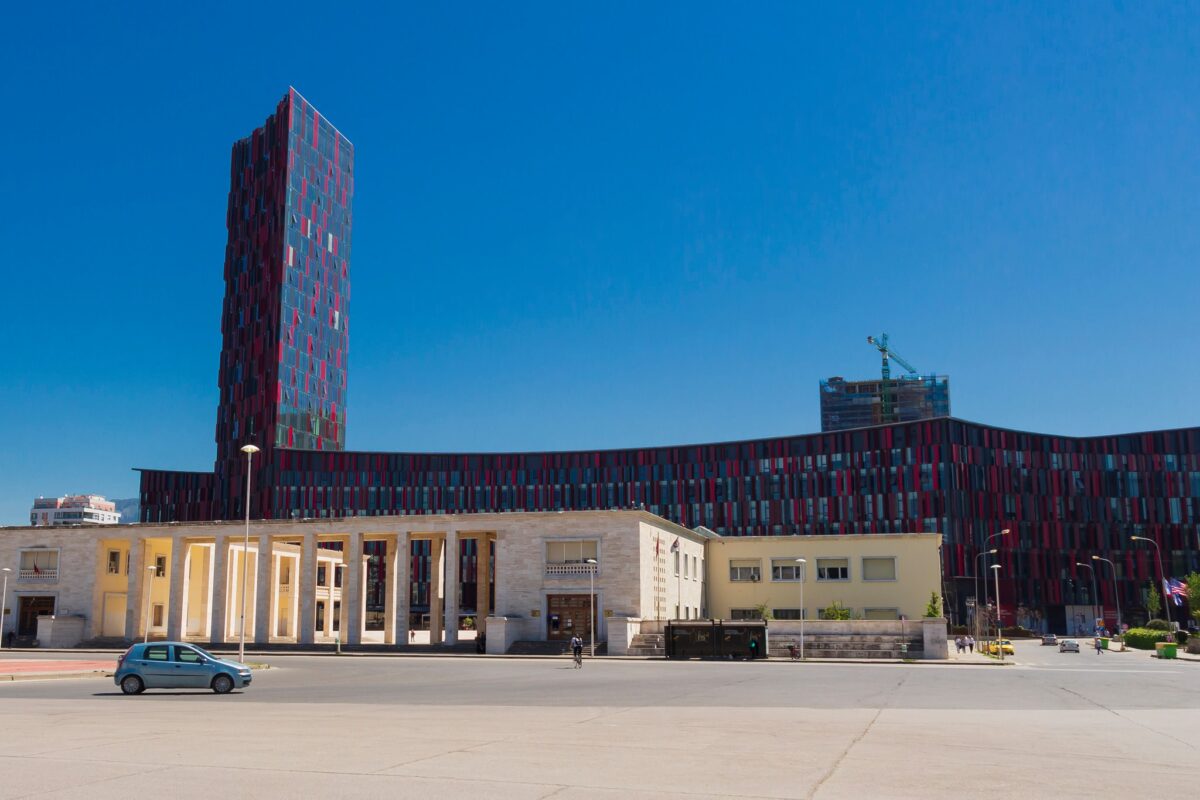 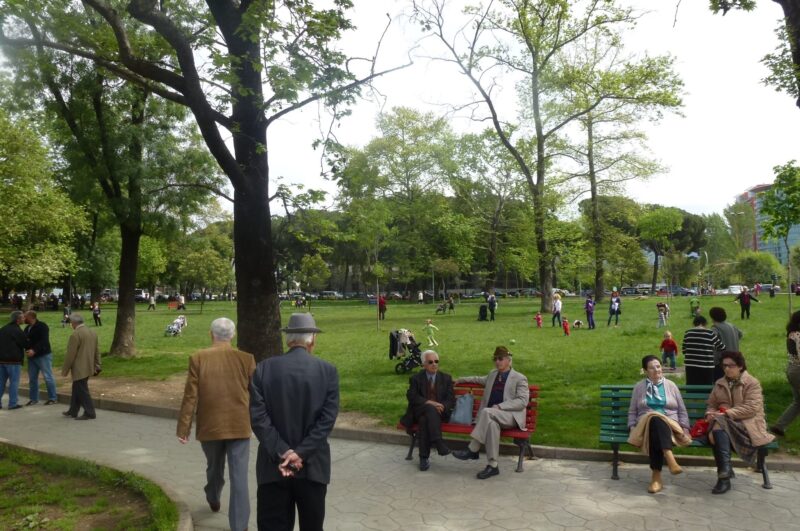 1. There are quite a few locals who look down on blacks and gypsies.

2. Albanians don’t like the stereotype that an Albanian is either a drug dealer or a pimp. 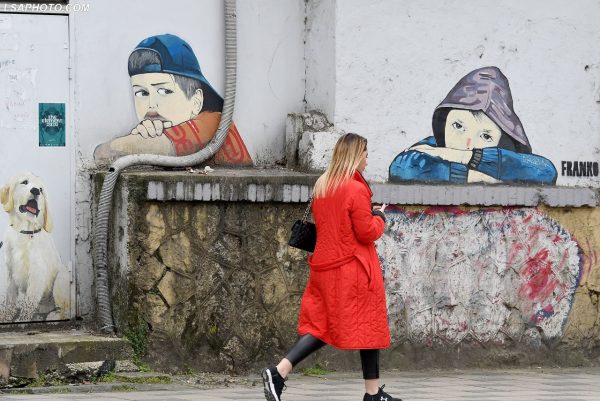 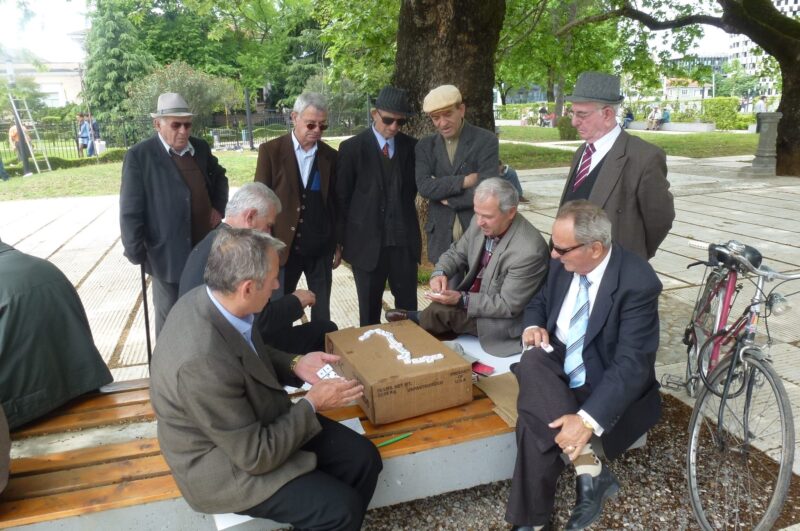 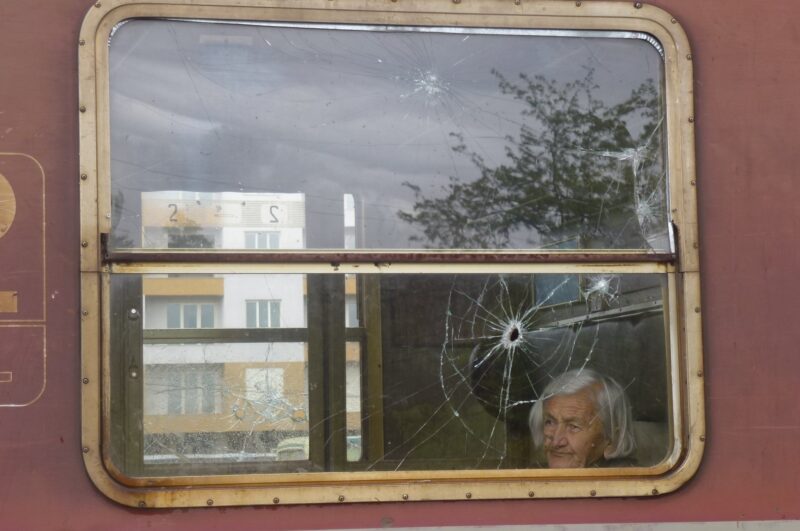 “The Dajti Express – see Tirana from above

If the weather’s good, it’s a good idea to take the cable car to the top of the mountain. The trip takes quite a long time, even by cable car, but it’s worth it. You’ll ‘fly’ quite high over forests, fields, houses, and a lake, and when you get to the top you can admire the city, and see what a surprisingly large area it covers.
The ticket in 2017 cost €6 return. Be aware that it doesn’t run at all on Tuesdays.
There are restaurants on the summit (we tried both and they were fine: get something to eat if you’re hungry – you won’t often get a chance to eat with a view like that. The café at the top of the Dajti Tower revolves (the café is in the glass area on the right side of the picture above) and takes above an hour to make a full revolution. If you’re lucky and the air is clear you might even see the sea!

How to get to the cable car departure point:

Well, this is actually the hardest part, and you’ll have to ask for help from locals. Two buses depart from the city center – one has a sign saying ‘Porcelan’ and the other says ‘Kombinat’. If you talk to someone on the main square and say you’re looking for the ‘Dajti Express’ they’ll probably help you, but if you want fuller directions it’s probably best to go to the tourist information office on the square. They speak English there, and can tell you where to go to find the bus stop. You have to buy the ticket on the bus, and it costs 40 lek. (2017)

One bus is orange and the other is blue, if that helps. Both run fairly frequently, so you probably won’t have to wait for long, but be prepared: the cable car departs from the end of a little street that’s easy to miss, and you’ll need to walk uphill for 10 – 15 minutes to reach it. Bearable. To your left you’ll come to a roadside shop painted in what were meant to be Italian colors, but they got them the wrong way round so it’s actually Hungarian 😊. This is precisely where the cable car departs from.
You’ll have to cross a small stream with all kinds of pet animals roaming around, as well as a huge amount of garbage, from abandoned refrigerators to simple household trash. (2017) 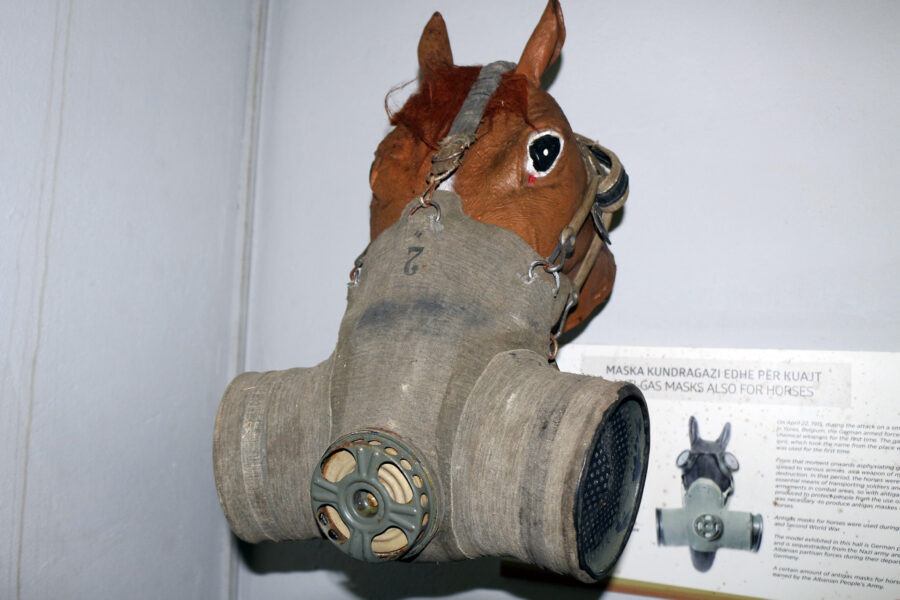 Tirana - Bunk'Art 1, a bunker museum - gas masks for horses too to survive a nuclear attack by the evil West against the Stalinist-Communist Albania - s.i. photo 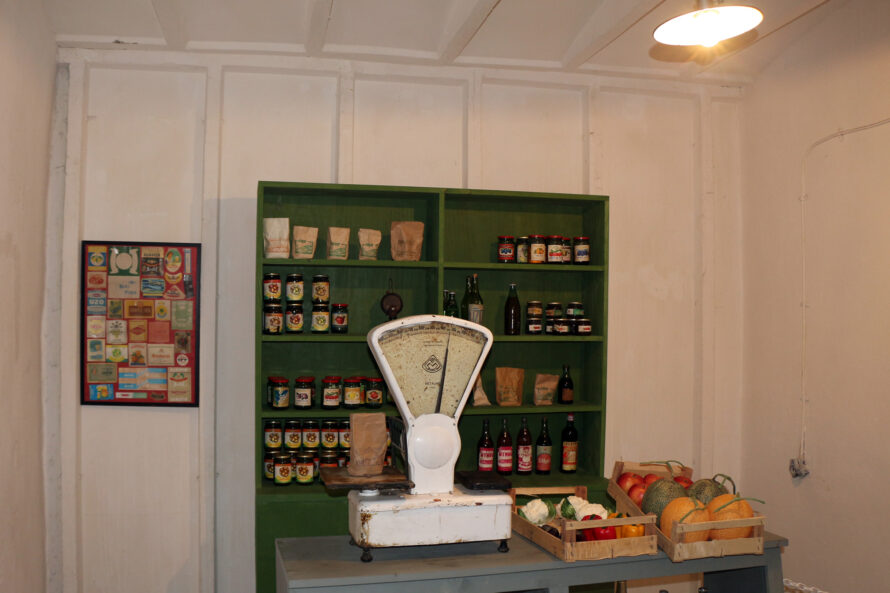 Tirana - Bunkart 1 - bunker museum - how a convenience store looked like in about the sixties - s.i. photos