2. Fantastic food! Bibimbap, bulgogi, dakgalbi, etc. are delicious, but it’s also worth ordering the set menu in restaurants – they often serve about twenty small plates with a range of different dishes. Jeonju in particular is a foodie paradise – try the local bibimbap!

4. Bukhansan national park is easily reached by metro, and has some great hikes

5. Maybe we were just lucky, but we spent ten days in Korea and had blue sky and sunshine every day. Cold, but great for sightseeing

6. Hahoe folk village, near Andong. Great to visit for an afternoon, but even better if you have a chance to stay overnight in a traditional hanok house.

7. If you visit Hahoe and you’re feeling reasonably active, the 5km walk to the Byeongsanseowon Confucian academy is well worth the trouble – it’s a beautiful old timber-frame academy built on a hillside overlooking a river, and perfect for a bit of relaxation before heading back into the noise and bustle of Seoul.

8. Itaewon, on the north bank of the Han river in Seoul, is very international and touristy, but still preserves a great, fun atmosphere. The place where Seoul lets its hair down!

9. Of the two main palaces in Seoul, Gyeongbokgung is the bigger and more frequently visited, but we found Changdeokgung, just a few blocks to the east, much more beautiful. The guided tour of the old royal infirmary was particularly good!

10. The politeness and kindness of the Koreans themselves. Many don’t speak great English, but we always found people happy to help us with directions, recommendations, etc.

1. Despite Psy’s catchy song, we found the district of Gangnam, on the south bank of the Han, a bit of a soulless disappointment

2. Even in the most ‘historic’ cities, the old town is generally just a couple of blocks of hanok houses and temples, which the rest of the city is the same identical modern architecture as everywhere else

3. The traditional temple buildings are very beautiful, with their elaborate green and red painted designs, but – at least to our untrained western eyes – when you’ve seen one you’ve seen them all. Not a lot of variety in design.

4. There’s a strange flip side to Korean politeness – people are, as a rule, extremely pleasant and courteous in any personal interaction, but strangers on the street will barge you out of the way and push in front of you in queues, and car drivers virtually never stop for pedestrians at zebra crossings

6. Despite the excellent public safety in Seoul, the frequent signs for bomb shelters, gas masks etc. are a constant reminder that North Korea, just 70km away, could attack at any time

8. Unlike China with its Great Wall and Forbidden City, or Japan with its Mount Fuji and Nagoya Castle, South Korea doesn’t really have many ‘iconic’ sights

9. While the food is great, it’s almost always spicy, which might not be to everyone’s taste, and we heard from vegetarians that it can be difficult to eat out – even vegetable dishes are often cooked in meat broth

10. K-Pop is utterly inescapable in Seoul, and while it’s now popular worldwide, it just isn’t my thing

“Before I visited, I would never have imagined thinking of South Koreans as in any sense kindred spirits. What I found, however, was that like me, South Koreans find toilet humor funny, and in souvenir shops you’ll often find little poop-shaped toys – there’s even a whole museum dedicated to the subject. South Korean toilets conscientiously play a little tune when you flush, and conceal whatever noise you make doing your business, whether it’s a number one or a number two. The flush water is even dyed a soothing color.
The Mr. Toilet Museum in Suwon, not far from Seoul, gives a funny and gives a surprisingly tasteful – given the subject matter – overview of all things toilet related (both front and back), with sculptures, photographs and installations. You can count on the pictures you take here being a big hit on Facebook!’ (K. J., 2017)

Korea has weird standards: a celebrity can go about with her butt and breasts out, but if you take the metro in a normal, loose summer dress, they stare at you as though you were clutching a bloody knife. Anyhow, Korean celebrities stare at you on every street, from every billboard, and although I barely know a quarter of them, I still recognize someone on every corner.

Hardly anyone speaks English, and even when they do they’re reluctant to use it: even at the airport the staff spoke to me in Korean (wtf), but those brave enough to speak to us were very friendly and helpful.

When it came to food and drink, I think I tried more or less all the most important things – soju (a rice-based spirit), sikhye (a sort of rice punch) makgeolli (rice wine), tteokbokki (rice noodles in spicy tomato sauce), mochi (rice sweets), jjajangmyeon (black bean paste) , japchae (vegetable noodles) and kimbab or onigiri, which is Korean barbecue. I could even have lived for a while on the offerings of the corner shop – all sorts of rice cakes, which I love, as well as ramen and tofu which I also liked, so all the essentials. Of course, they sell sweet pastries here too, but I love the way they always give you chopsticks and a spoon for everything, and never a knife and fork.

Their palaces and temples are very beautiful, and surrounded by nature.” (2018) 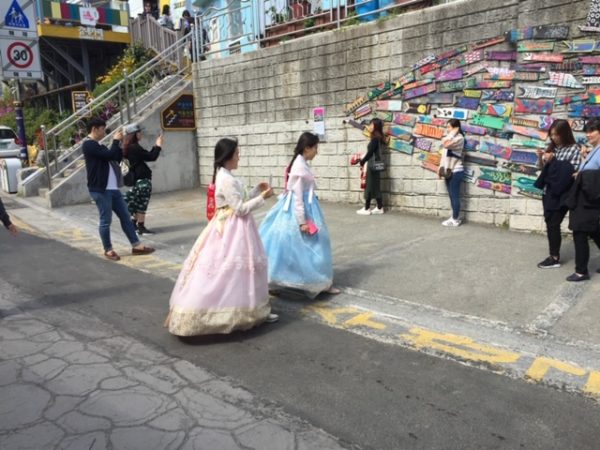 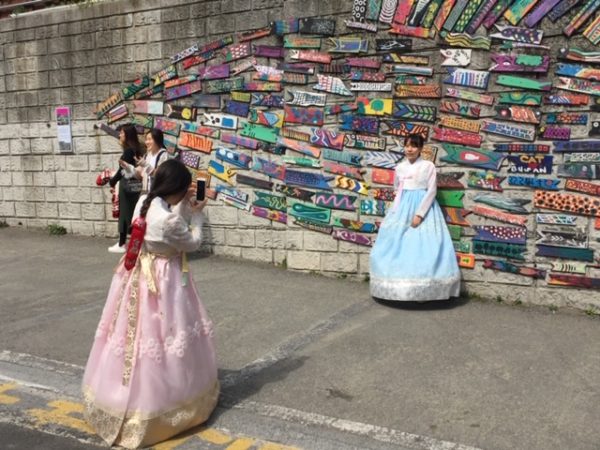 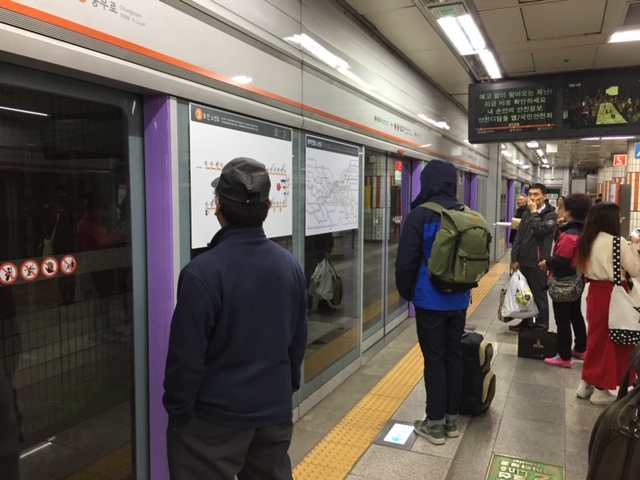 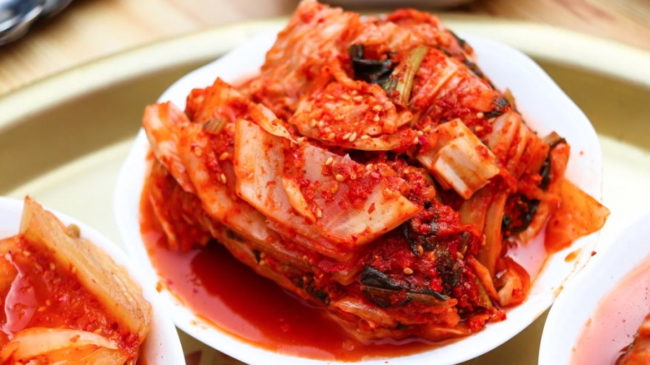 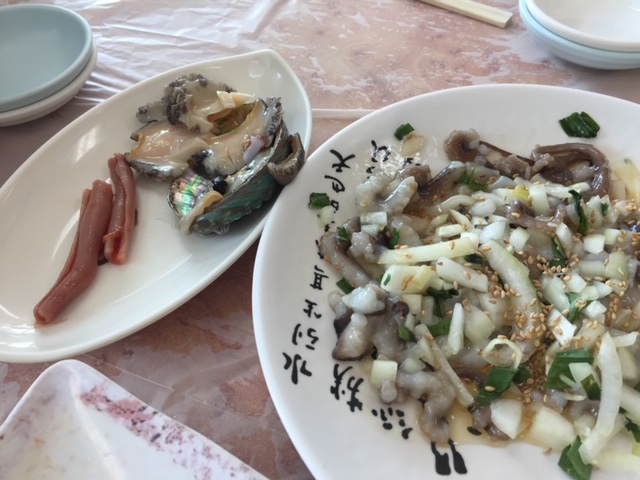 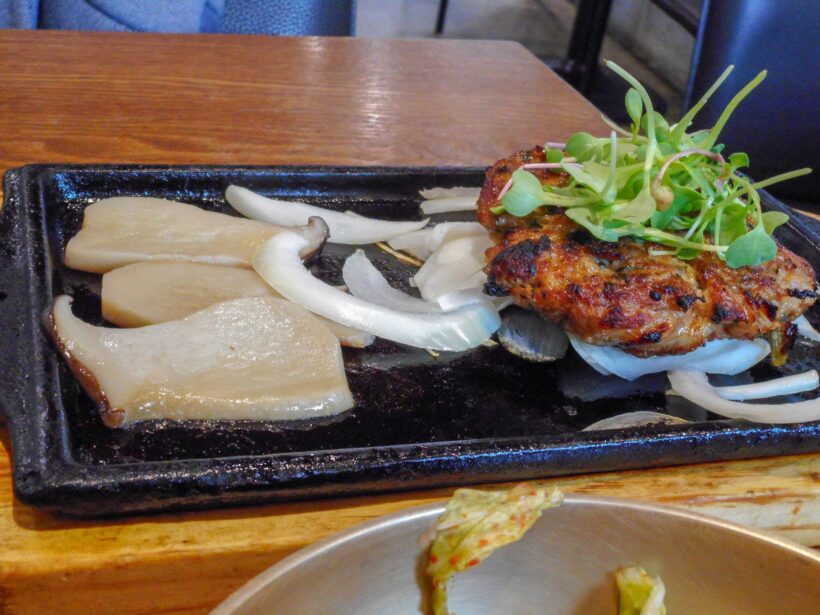 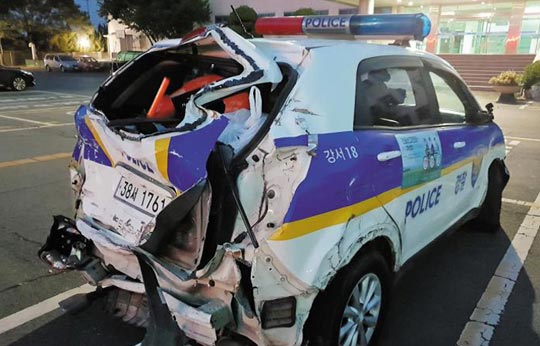 South Korea - someone played around with the police 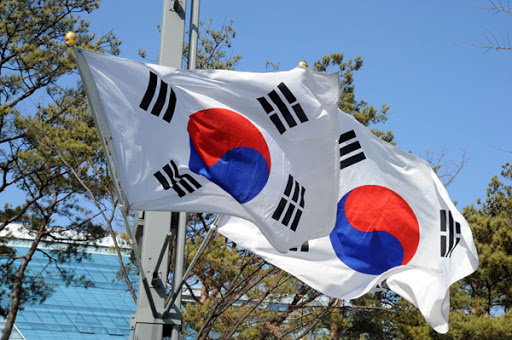 South Korea (Republic of Korea) is in the Far East region of Asia.

Its only overland neighbor is North Korea (Democratic People's Republic of Korea). South Korea has coastlines on the East Sea (Sea of Japan) to the east, the East China Sea to the south, and the Yellow Sea to the west. It is separated to the southeast from the Japanese island of Tsushima by the Korea Strait.

South Korea is the most ethnically homogenous country in the world after North Korea.

44% of South Koreans are religious: most of them Protestant, Buddhist or Catholic.

South Koreans have perhaps the longest working hours in the world. No wonder they developed an incredible ability to fall asleep anywhere outside their working places.

South Korea is a highly developed country. About 85% of South Koreans are middle class.

Most frequent surnames: Kim, Lee (Yi), Park and Choi. Strangely, it is not considered proper to get married to someone with the same surname (even when there are no family relations).

Kimchi is a national obsession in South Korea. Do not imagine some sophisticated food: kimchi is in fact nothing more than fermented cabbage. Eating kimchi goes back to ancient times and there are a thousand ways to prepare (ferment) it. It often tastes disgusting to foreigners at first.

Hygiene conditions in South Korea are basically flawless. No vaccination needed. Public safety is excellent. Male foreign tourists should not insist on visiting bars where non-Koreans are openly unwelcome. Some expatriates think that the bars’ clientele unnecessarily pressure the owners, but Koreans justify this (otherwise illegal) discrimination by saying that too many foreigners behave inappropriately in bars.

70% of South Korea is mountainous. The bulk of the population lives in the metropolitan area around Seoul.

DMZ, the demilitarized zone between South Korea and hardline Communist North Korea is only 50 kilometers away from Seoul.

Optimal timing for a tourist visit: from the middle of April to May and from September to the end of October. The winter is really cold.

South Korea is the largest market for plastic surgery per capita in the world. Reportedly around 20-30% of Korean women undergo a cosmetic procedure at least once in their lifetime. Parents often gift their daughters “double eyelid surgery” (a popular procedure on the eyelids to appear more western) for their sweet sixteen. 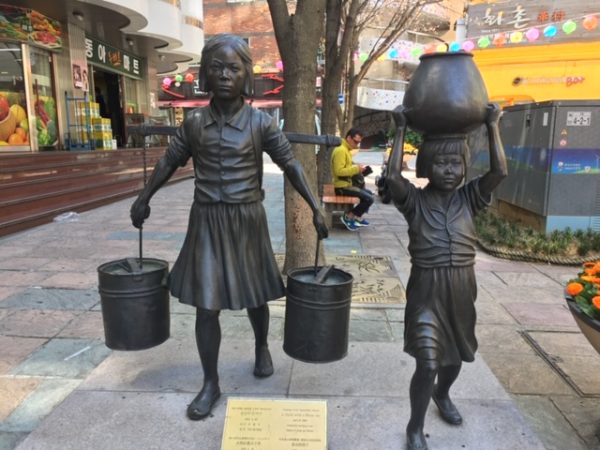 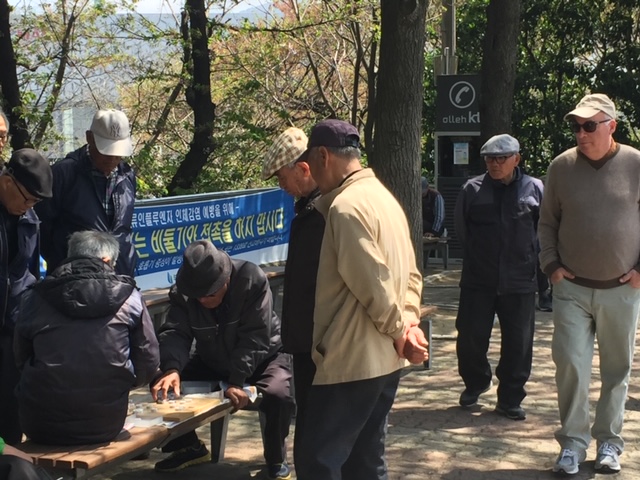 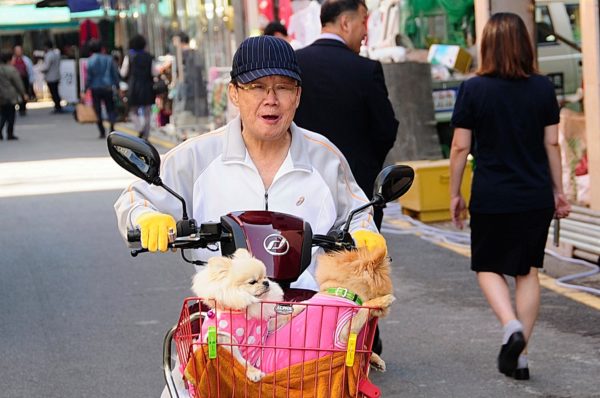 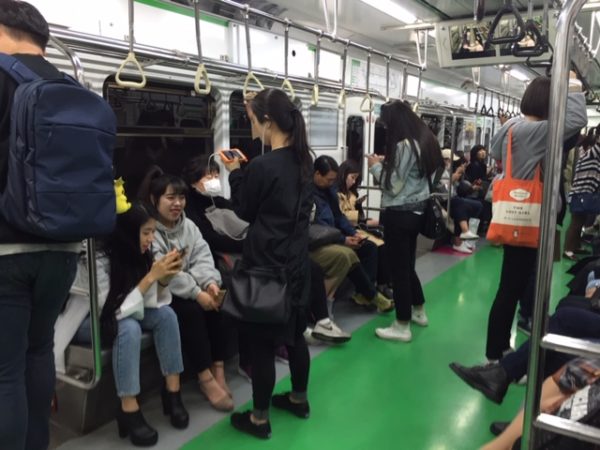 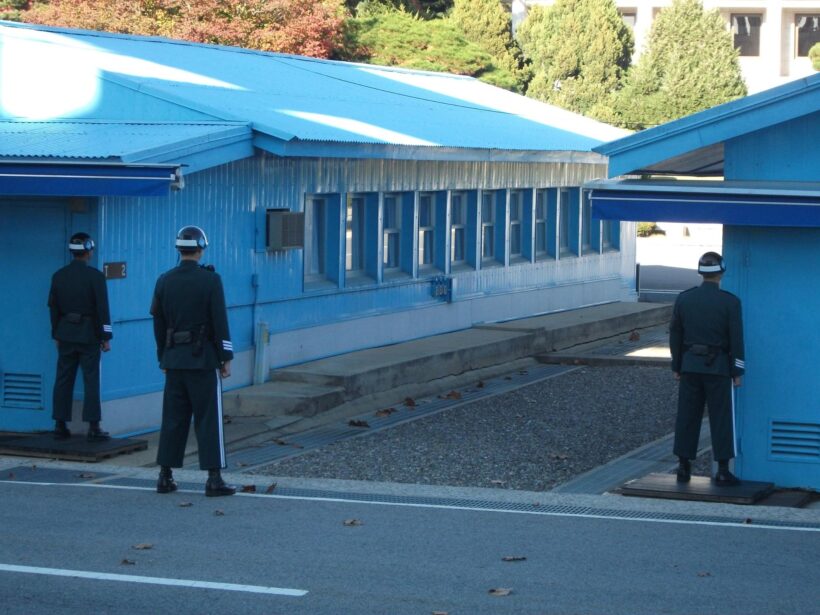 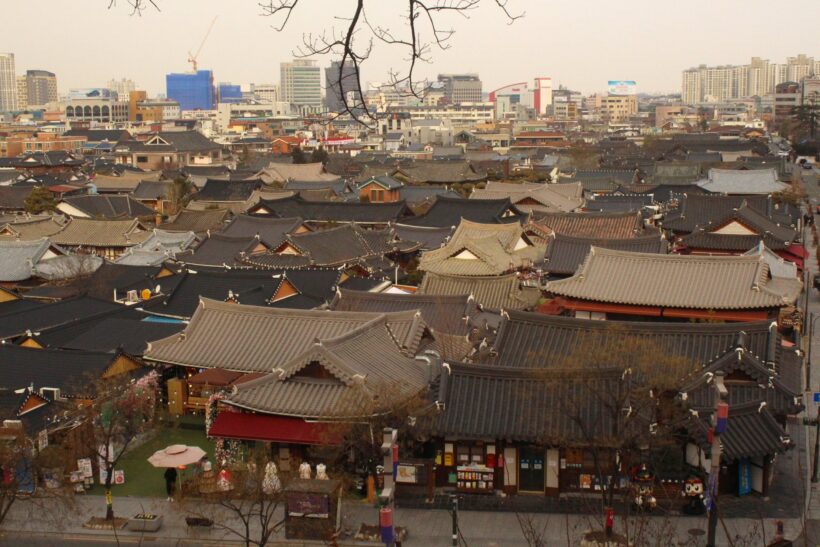 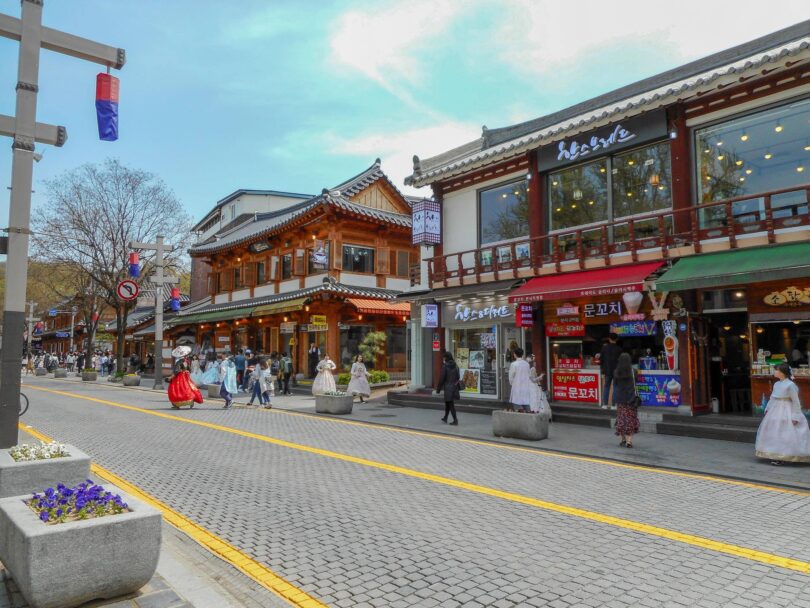 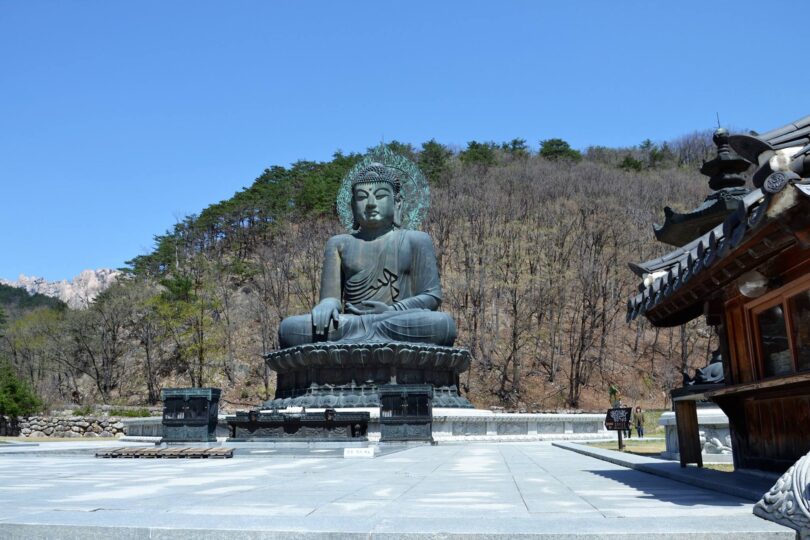