1. Cheap, tasty pies sold by street vendors, and lots of cultural sights
2. The island is quite small, so it’s practical for tourists to explore
3. Not a tourist ghetto, so you get an authentic impression of Malaysian life
4. Good mix of man-made and natural attractions to see
5. A lot of varied cultural roots, with an exciting mingling of diverse cultures
6. The charming street scenes in Georgetown, with small shops, street vendors and the smell of delicious food
7. Good public safety
8. Unique within Malaysia
9. Not a snobbish place, but rich in simple, authentic, local historical and cultural traditions
10. The colonial buildings of Georgetown

1. From a beach holiday perspective, Langkawi is better
2. Sometimes the hygienic standards in the city are not so reassuring
3. A lot of hustle and bustle at the main tourist attractions
4. Locals drive like maniacs, taxis are expensive, and there’s too much traffic
5. Because of domestic tourism, the crowds are unbearable during national holidays (Malaysians love Penang)
6. A lot of mosquitos, and nuisance monkeys
7. Bathing can be dangerous on some beaches – stinging jellyfish in many areas
8. The beaches themselves are relatively attractive, but the sea itself doesn’t present such an enticing prospect. Many beaches aren’t very well maintained (a lot of trash)
9. A good proportion of the buildings are run-down and dilapidated
10. Street vendors don’t uphold the highest hygiene standards

“For me, the real magic of Penang lay in its cuisine. Later on, I came to understand why, but at the time I was just bowled over by the tremendous variety, how delicious everything is, and how absurdly cheap certain things are in the evening market.

I think it’s telling that there’s already a tourist map showing the most typical Penang dishes, with pictures and descriptions on one side and their location on the other. Well, I used this map until it fell apart, sampling along with the way delicious noodles, soups, and I couldn’t get enough of the popiah spring rolls.

It’s possible to spend hours and even days just strolling the old town, going into Little India, or looking at the many little Chinese and Indian temples, and just soaking up the city’s atmosphere.

“The sacred buildings are not merely shopfronts but are still used by locals for their original purpose. The muezzin’s call can be heard from the minarets of mosques, even at a great distance, and whenever I passed a mosque I always saw worshippers inside, kneeling to face Mecca. (I could also go into the mosques, so long as I put on the long, hooded cloak provided.

In the Hindu temple, where almost all of Hindu mythology is brought to life through colorful statues, women sit together every morning, and families come to pray in the evening.

I also entered some of the sacred Chinese shrines, and even hiked up to a colorful, large-scale Buddhist temple complex called Kek Lok Si, some distance from the city center, which was erected in honor of Bodhisattva Kuan Yin. I saw the Chinese light incense while standing on shrines – they believe that incense helps them connect with deities or ancestors (depending on whose shrine or temple they are in). Incidentally, as a result of the colonial past,

Christianity is also represented – there are clean, whitewashed Christian churches in the city.” (2019) 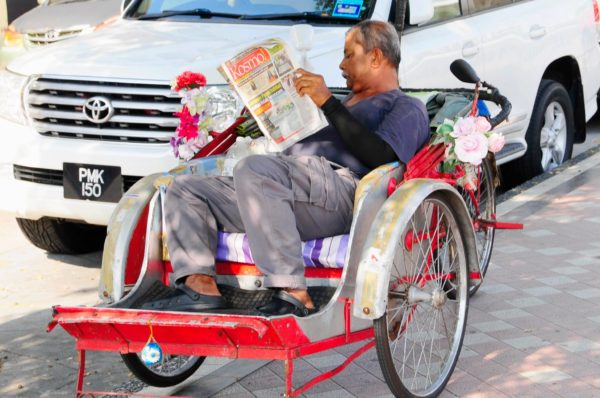 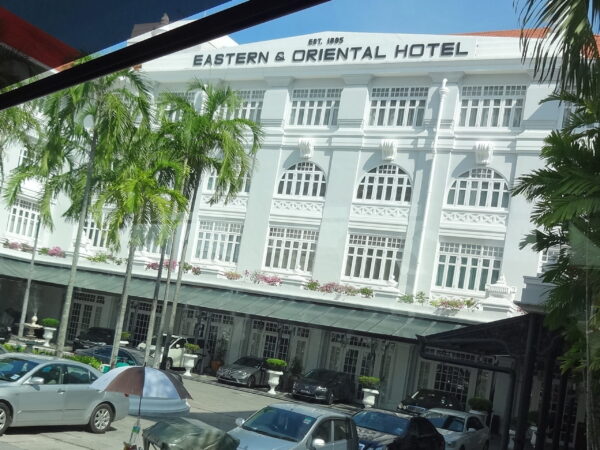 “More and more Uber taxi drivers in Kuala Lumpur have started talking about what dishes we should definitely try whenever we’re in Penang. We suspected that the island would offer both something more and something different in terms of gastronomy. We were right. It turns out that Penang has been listed for years as “one of the most exciting gastronomic destinations in the world”. The coexistence of Malay, Indian and Chinese people not only resulted in cultural entanglement but also created something quite unique in terms of cuisine. We walked practically every street of Georgetown. We never, and I mean never, had any digestive trouble, even though we were very adventurous. Every single day, we could hardly wait for the evening to come, and for the streets to be filled to the brim with stallholders, for the food courts to open, and for our taste buds to begin to dance. My friend has been saying ever since that what first comes to mind about Malaysia is the cuisine and street food, everything else only after that.” (2017) 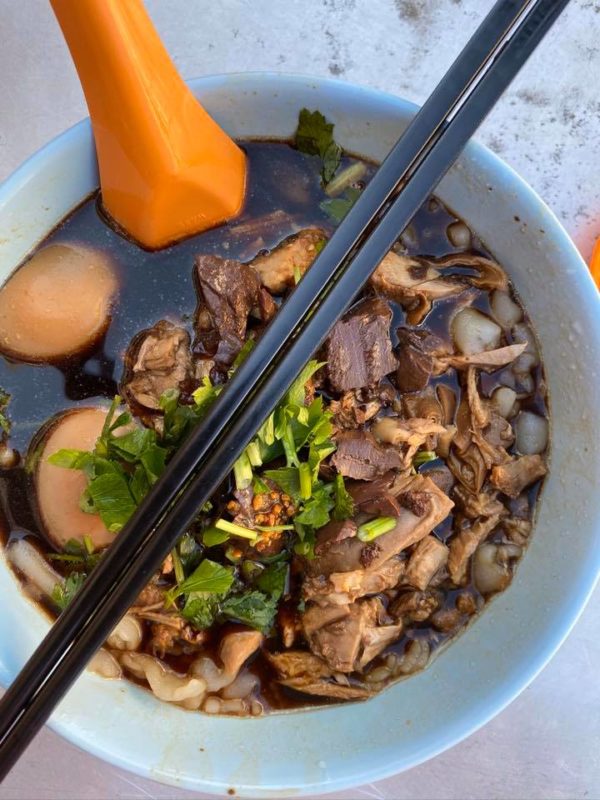 Penang is a very safe tourist destination. The crime rate is definitely low. 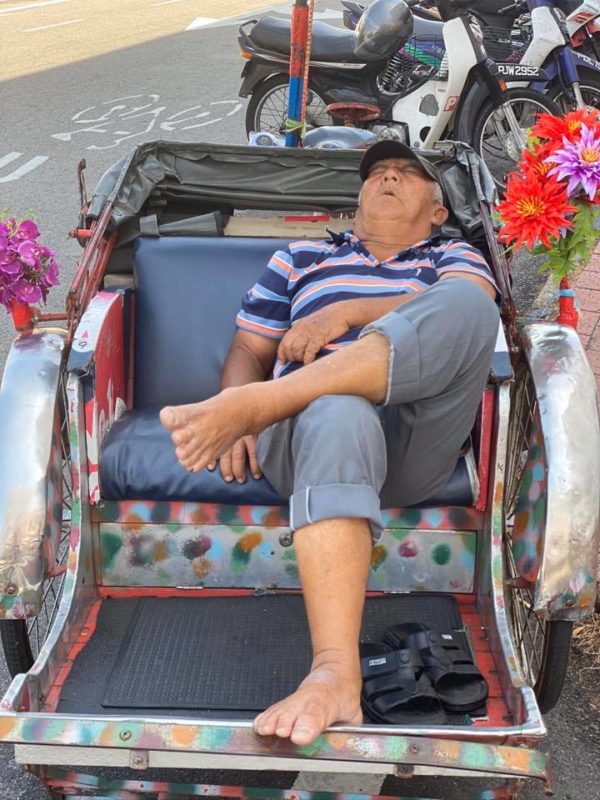 Penang is a Malaysian island. 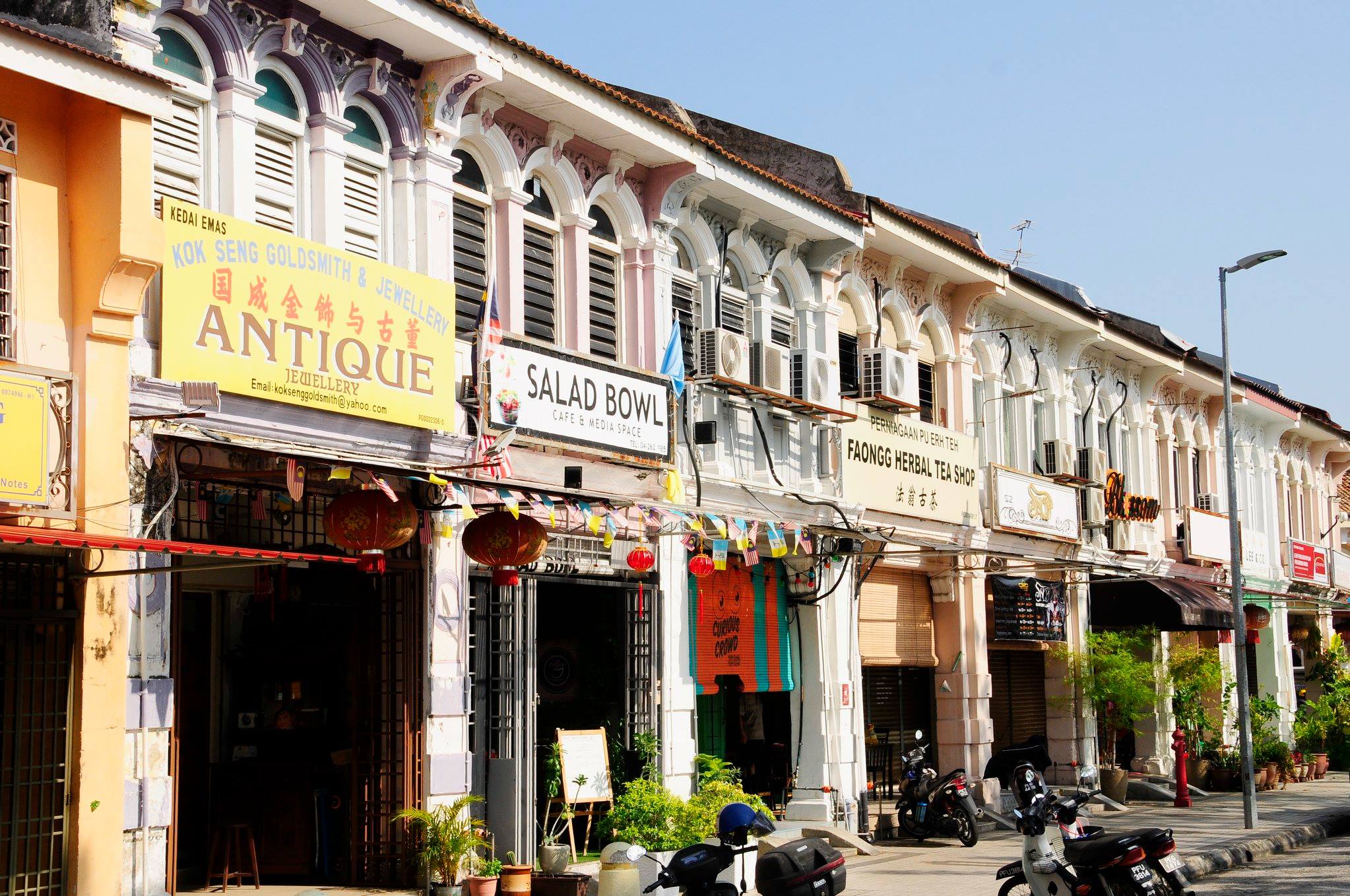 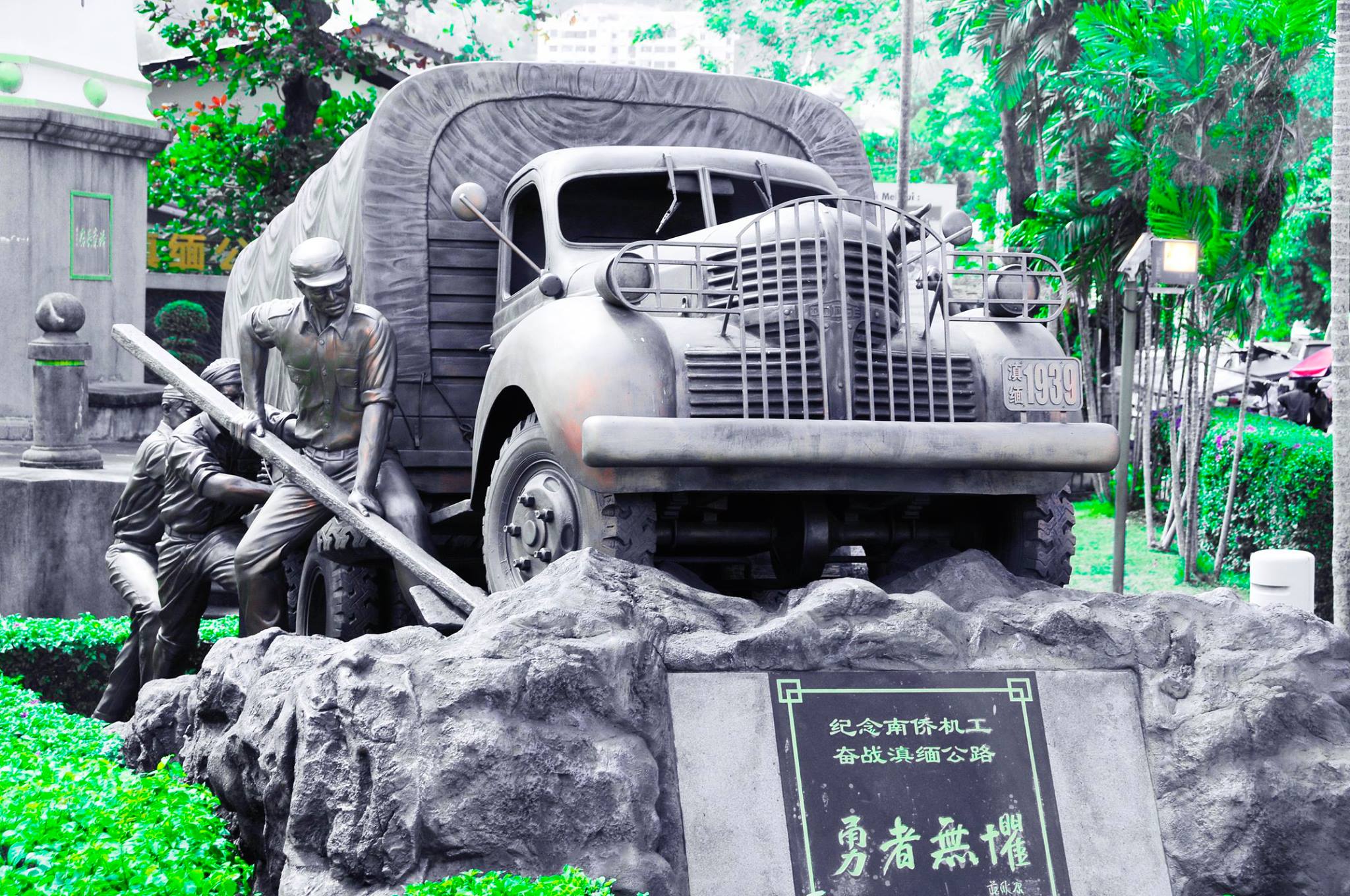 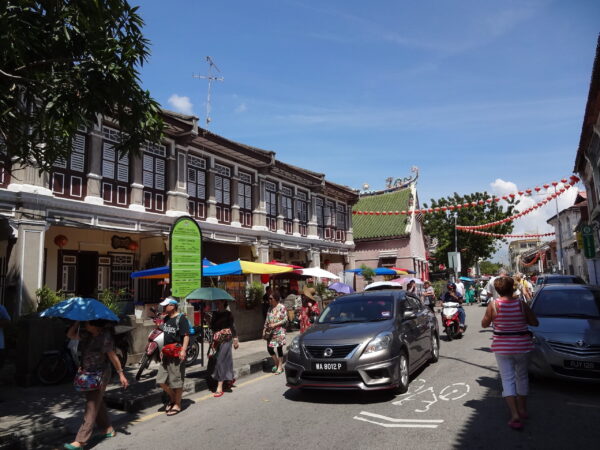 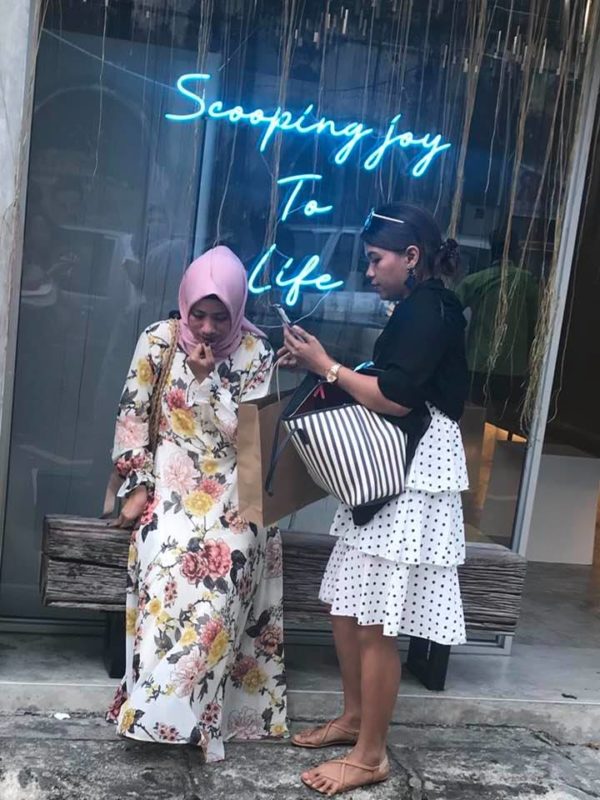 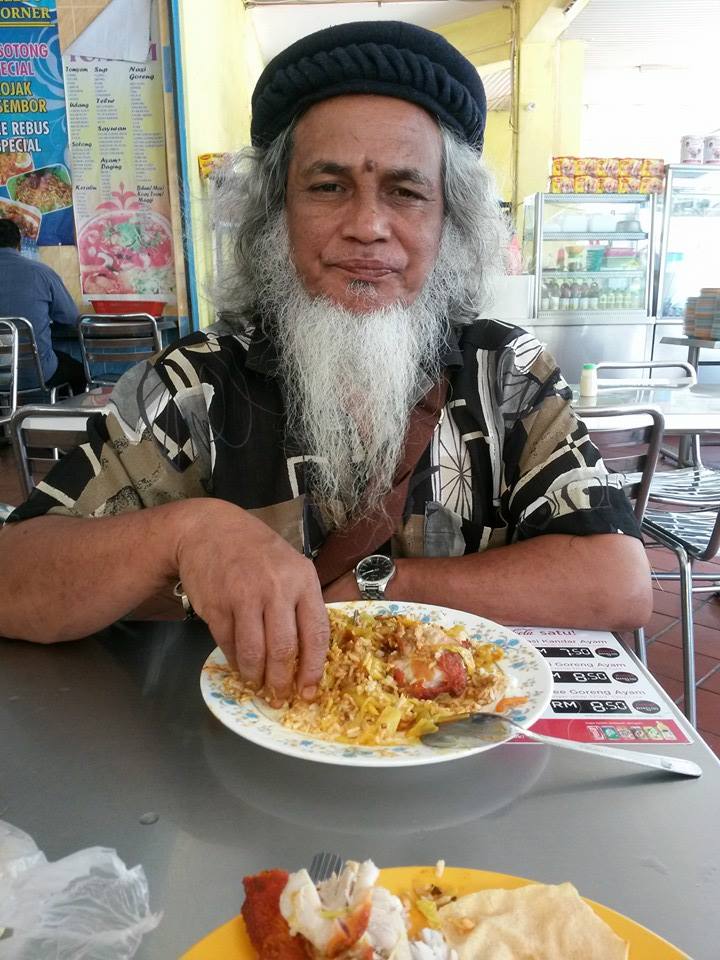 Penang - Nasi kandar, steamed rice which can be plain or mildly flavored, and served with a variety of curries and side dishes - t.r. photo

"In my opinion, the Chinatown in George Town is the most authentic. While in Singapore, Kuala Lumpur or Melaka, for example, old Chinese shops are surrounded by gleaming skyscrapers or other inappropriate buildings, time really has stopped here in the Chinese part of town. The presence of many nations has, of course, had a beneficial effect on gastronomy. George Town is a favorite destination not only for world heritage seekers but also for gastro tourists. As in many big cities, the food court institution is extremely popular here, i.e. many small and varied restaurants in one place.

In the George Town food market, variety is taken very seriously, no license is issued to two restaurants serving the same specialty. You just walk around, browse the offerings, talk to the sellers, peruse the menus, and then make your choice. A large bowl of soup or a pasta dish with sea scallops is on average about a dollar or two, so it is not the wallet but the stomach capacity that limits sampling. Everything is freshly made from local ingredients and everything is divinely delicious. Malaysians love to eat so much that the main driver of domestic tourism is trying out local specialties. Because of the cheapness of street cafes, few people bother cooking at home, so restaurant tables fill up late at night. "

________________________
“Sacred buildings are not storefronts, but are used by the locals for precisely what they were designed to do. I often heard the muezzin sound the call to prayer from distant mosques, and whenever I arrived at a mosque, I always saw people praying inside as they knelt facing toward Mecca (I could also go into the mosques if I put on the long hooded cloak provided). In the Hindu temple, where almost all Hindu mythology comes to life through colorful statues, women sit and meet in the morning and families come to pray in the evening. I also entered the Chinese shrines and even hiked to the new, colorful, large-scale Kek Lok Si Buddhist temple complex a little further from the city, which was erected in honor of Kuan-jin Bodhisattva. I’ve seen the Chinese light incense while standing in front of shrines – they believe incense helps them connect with deities or ancestors (depending on whose shrine or temple they are in). And by the way, I note that due to the colonial past, Christianity is also represented - there are also clean, whitewashed Christian churches in the city.” (2019) 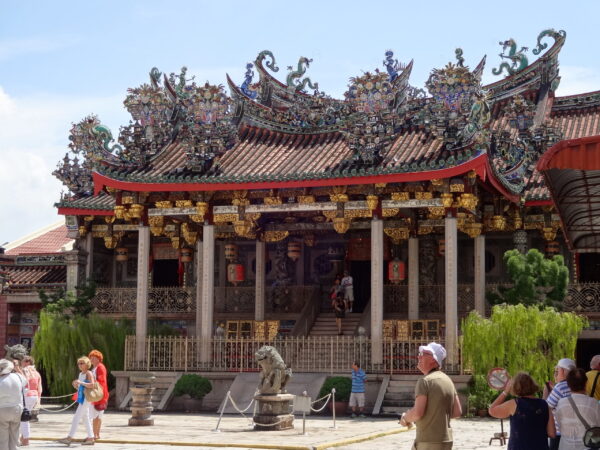 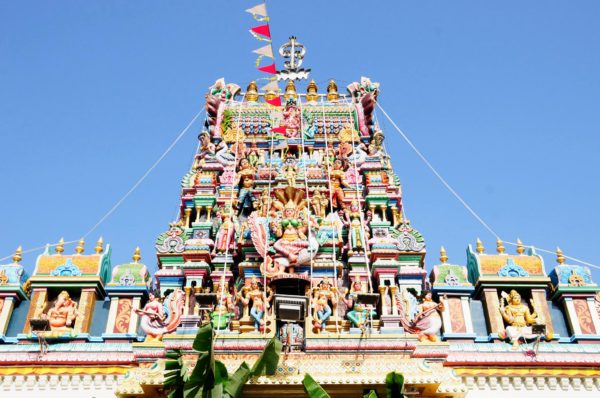 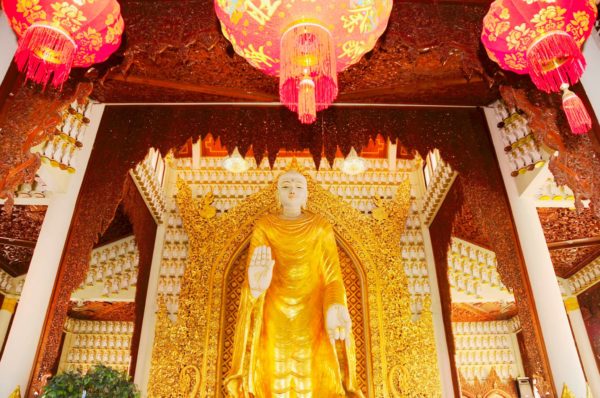 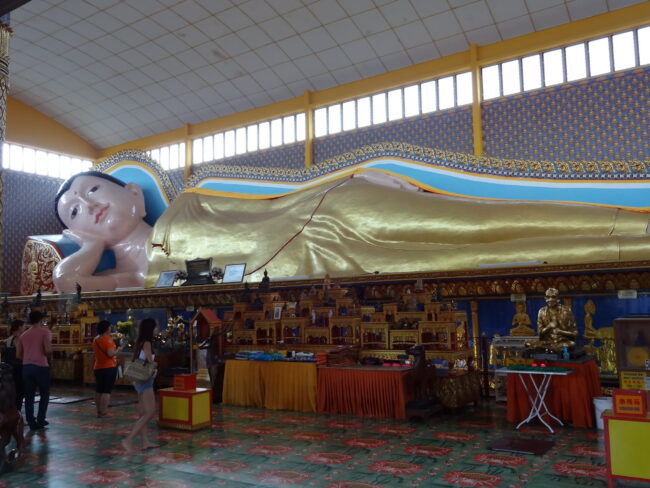 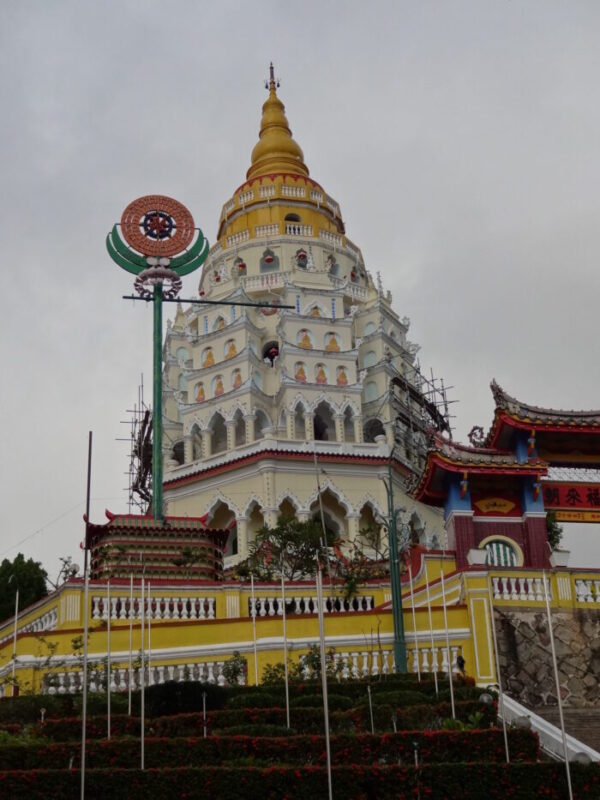 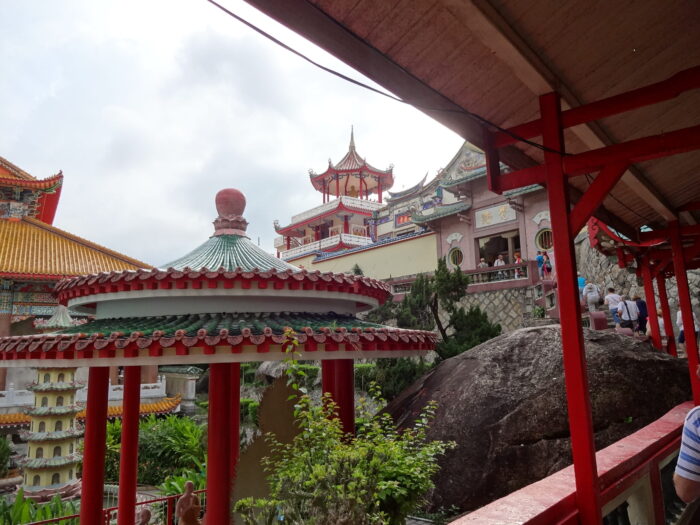 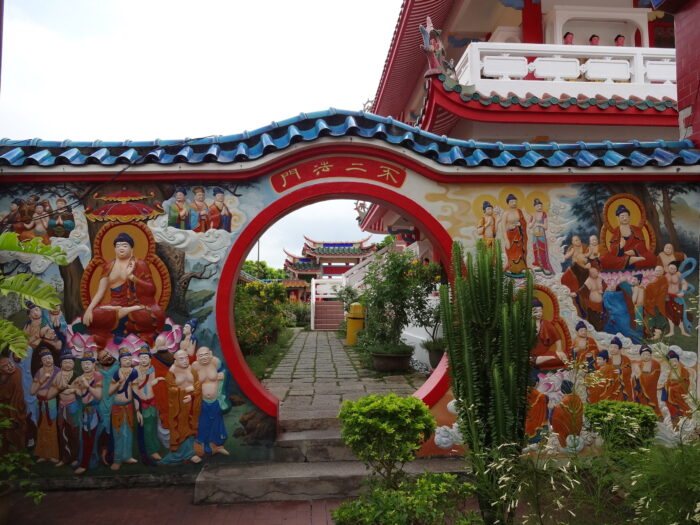