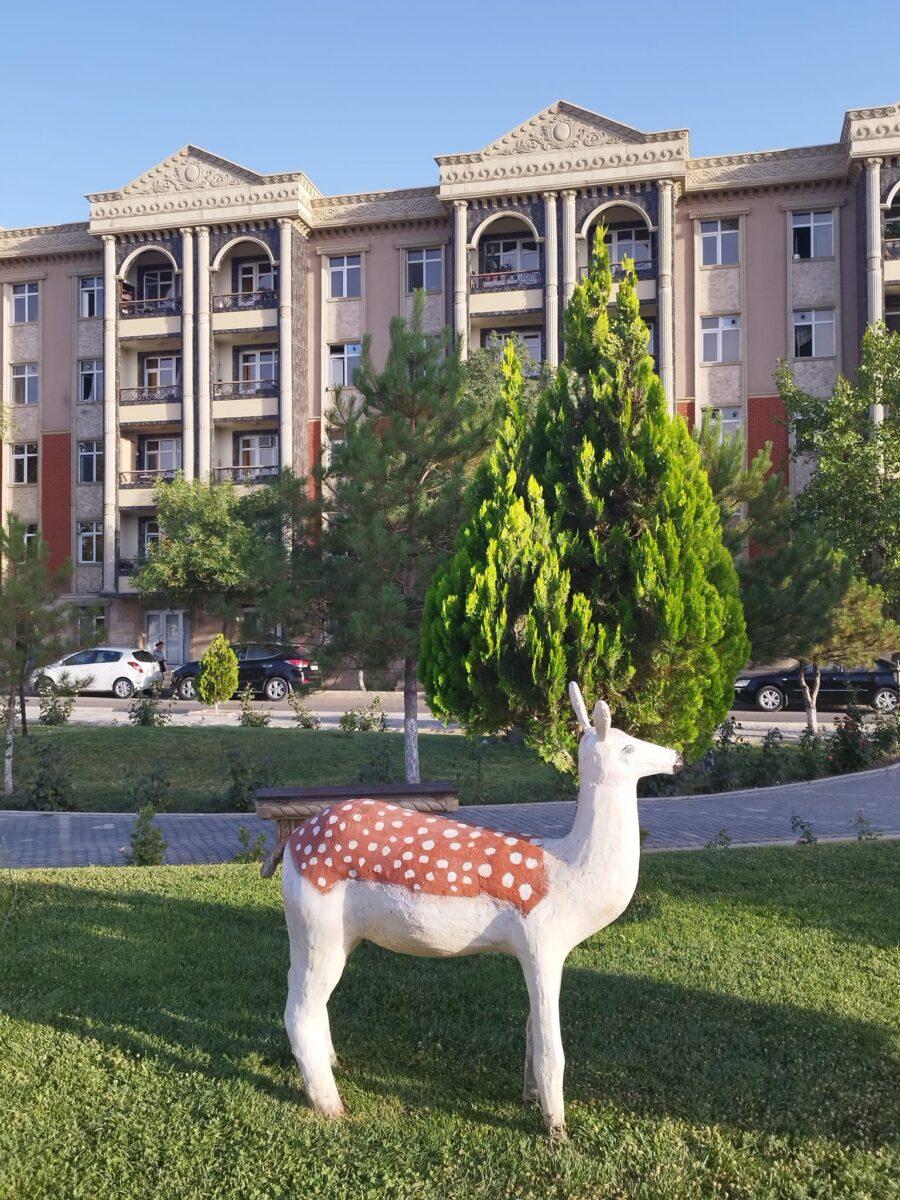 Nakhchivan - one of the kitschy public plaster sculptures - Ata photo

,, Wherever one walks in Nakhchivan, masterpieces of Islamic architecture stand one after the other, mosques, madrasahs, and the castle, which now houses the local history museum. And no one should miss the Khan's palace, which was the seat of the Khanate of Nakhchivan between 1780 and 1920 🙂
Nakhchivan offers much more than the traveler might think!

One has a strange feeling in Azerbaijan. Wherever one travels, old houses are pushed behind walls to show that it no longer exists; it is not part of the modern and developing oil country. However,  the old part of the town has some eye-catching buildings too... (Ata, 2022)

I have arrived in the enclave area of ​​the autonomous region of Azerbaijan - Nakhchivan. As the maps show, there is no land connection between the two parts of the country. Flights are exclusively between the Baku airport and the airport of Nakhchivan airport. From this latest, no other domestic flights depart anywhere. There are flights every hour.

The national airline has a monopoly on air travel. Azerbaijan Airlines (J2) gives tickets to foreigners for 70 manats at the fixed government price, but poor Azerbaijanis get a discount of 10 manats.

I follow our path with offline radar. With a quick left turn, we fly over the Caspian Sea, and, to our great surprise, we fly into Iranian airspace. When we get to Karabakh, the plane will fly further into Iran. Then, when we get to the Nakhchivan region, we make a quick right turn and fly over the Araz River to get back to Azerbaijan. As if the captain wanted to show me the autonomous region, we fly almost to the Turkish border, and with a solid right turn, we land above the town of Nakhchivan.

The airport is small but well-tended. A birch grove leads to the airport bus. 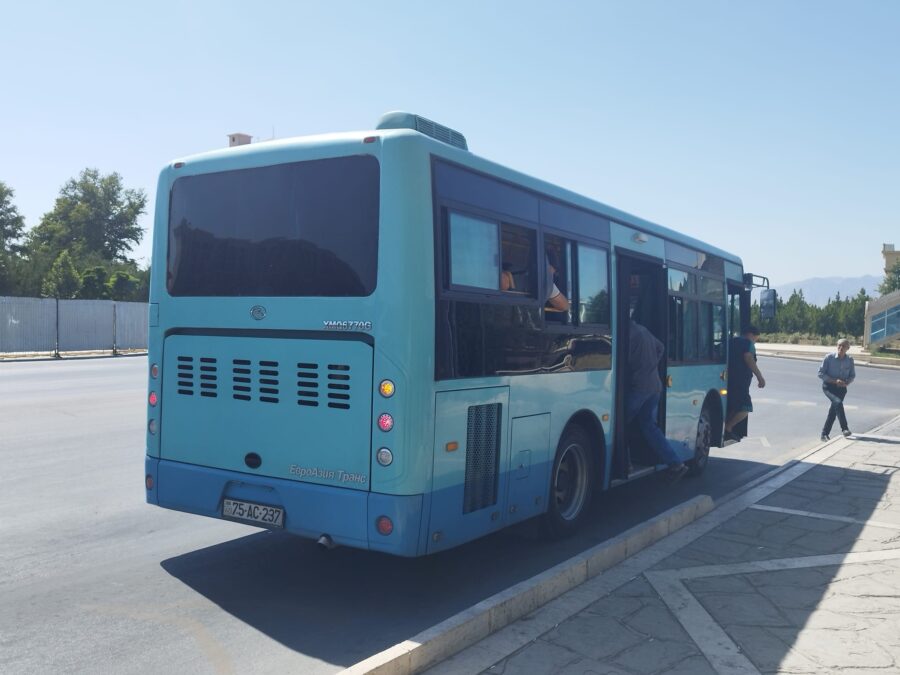 Sabahınız yaşın Naxçıvan 🙂
Good morning in Nakhchivan! Breakfast at the Grand Hotel 🙂 unfortunately, there is no Airbnb or a large selection of hotels here; the local government has designated five hotels, all in the capital Nakhchivan where foreigners, i.e., visitors, can stay.
The Grand Hotel has enormous rooms with some unnecessary space. I could even organize a party in my single room.
The breakfast is the same as if I had just dropped into Turkey. Olives and cheeses are a bit foreign to Azerbaijan. However, the tea and fig jam are divine.
The view of the city from the room is beautiful. Beyond the mosque, the mountains are already in Iran :) (Ata, 2022) 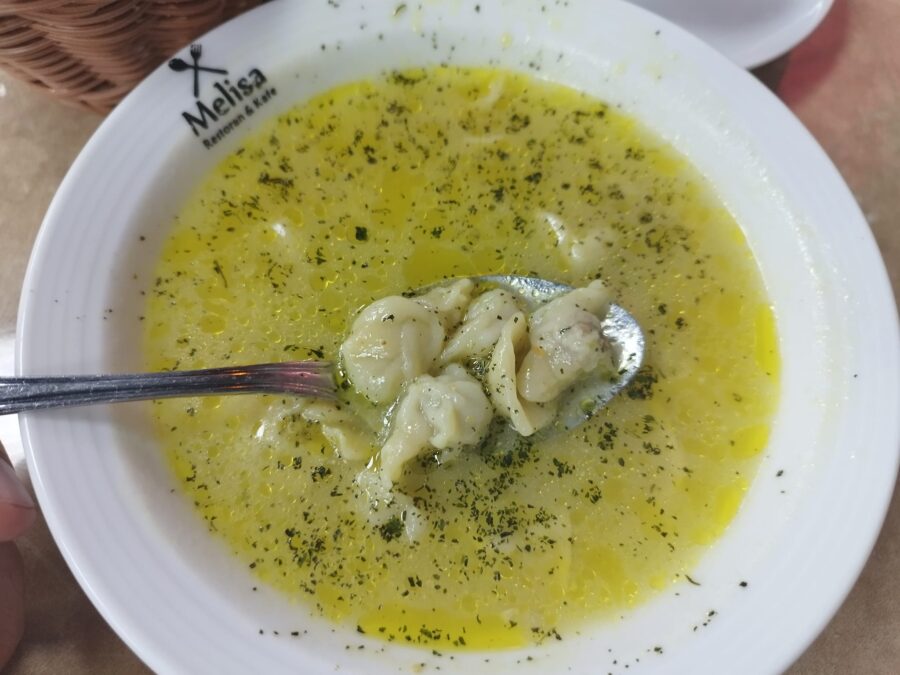 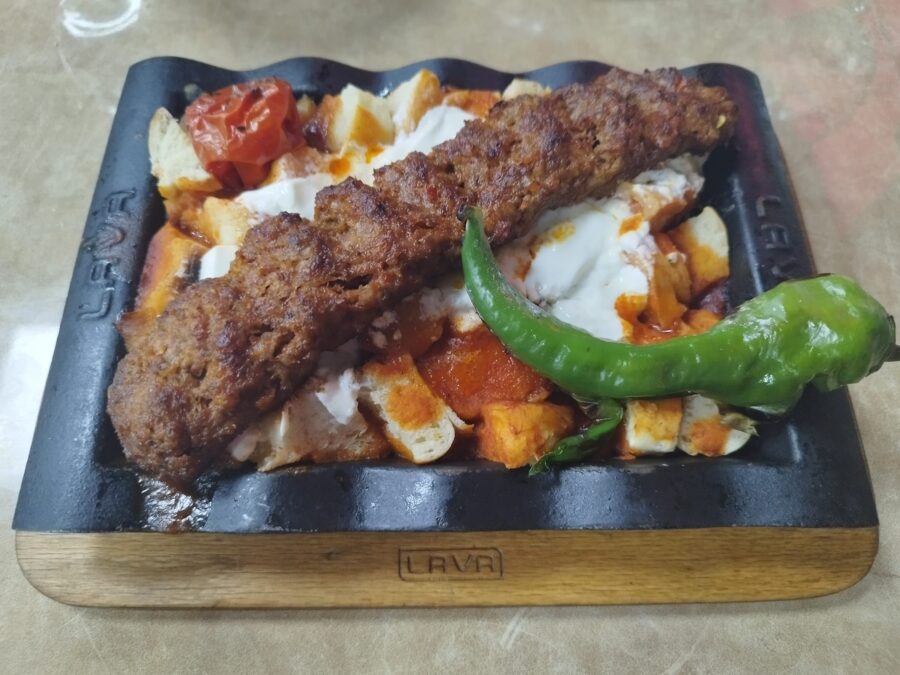 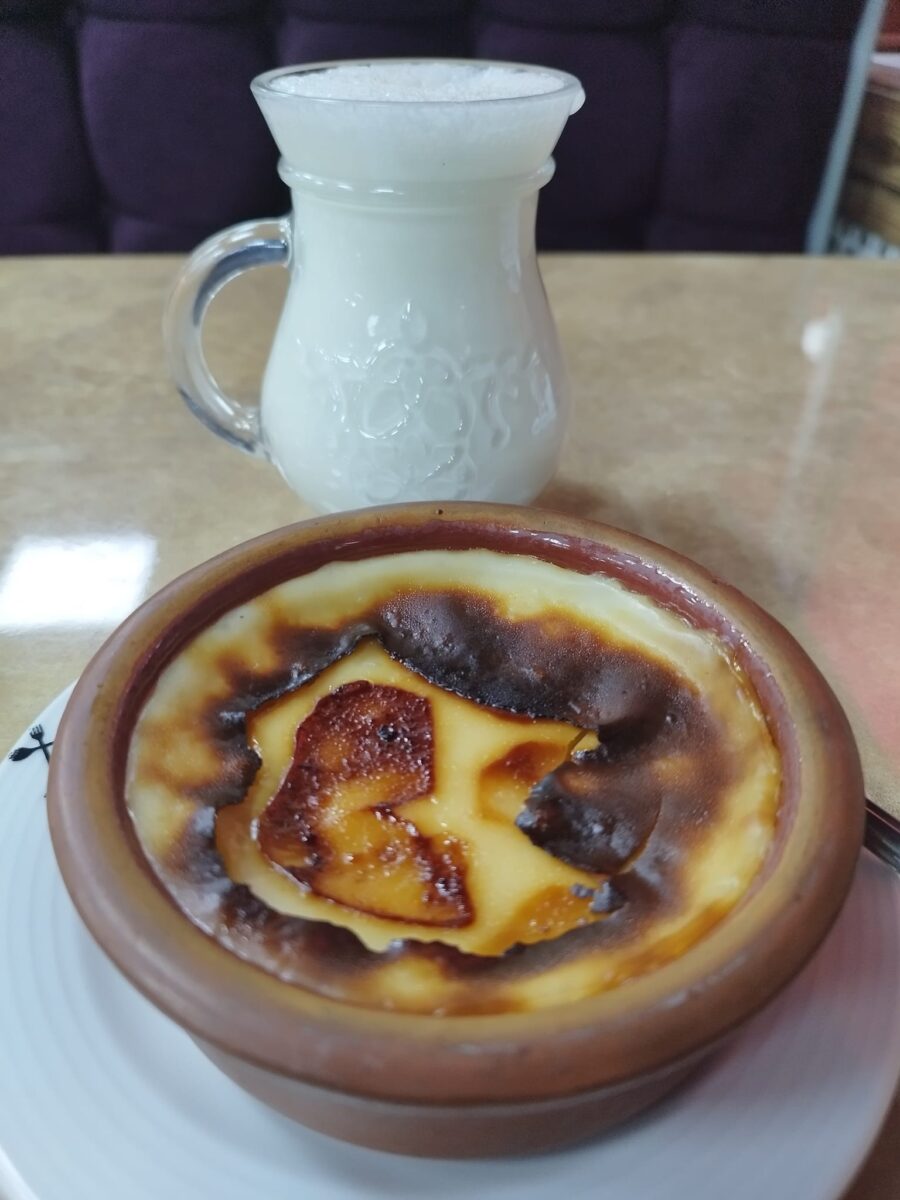 The emigration from the enclave is so forceful that the Azeri government favors the locals by offering lower prices. There is no VAT on goods here; everything is almost half the price as in Baku.
Where else could I have started my journey in Nakhchivan but the bazaar? (Ata, 2022) 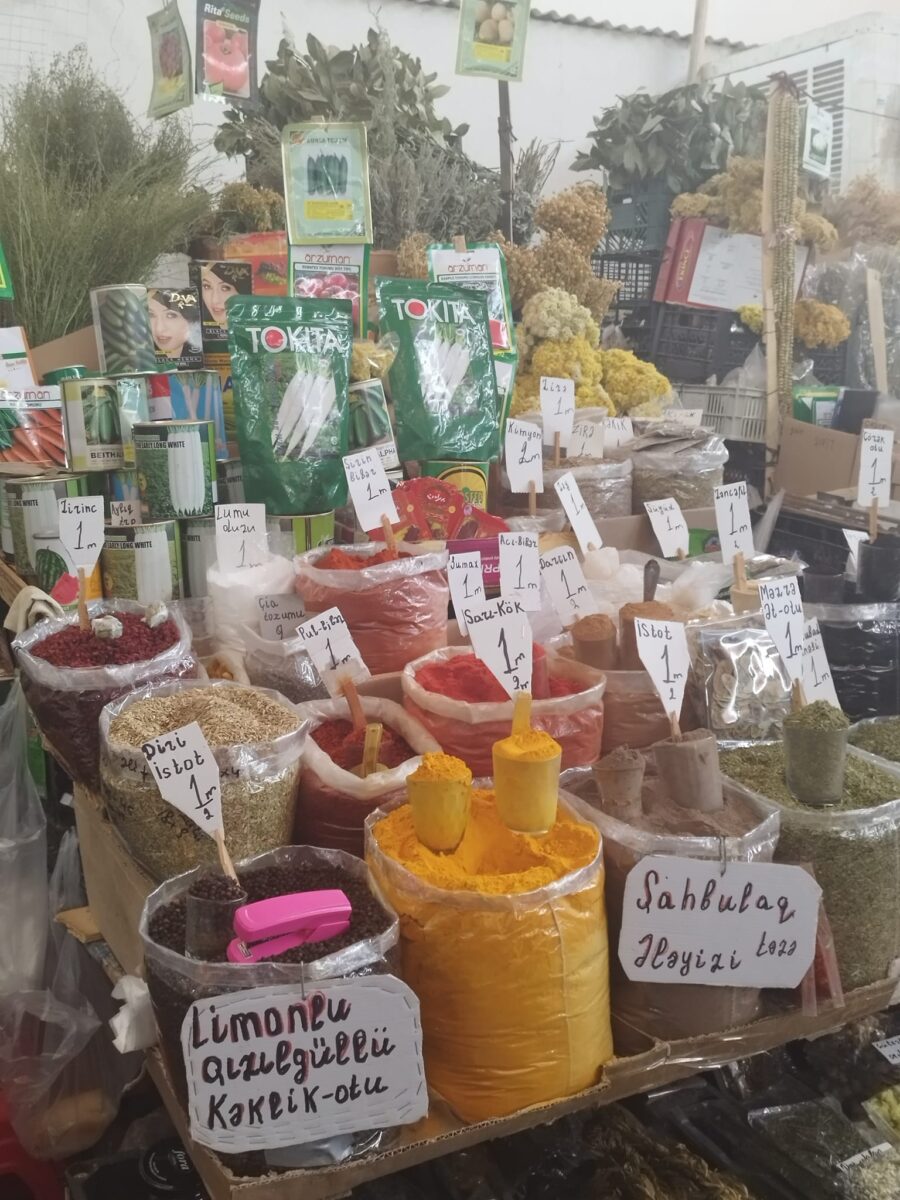 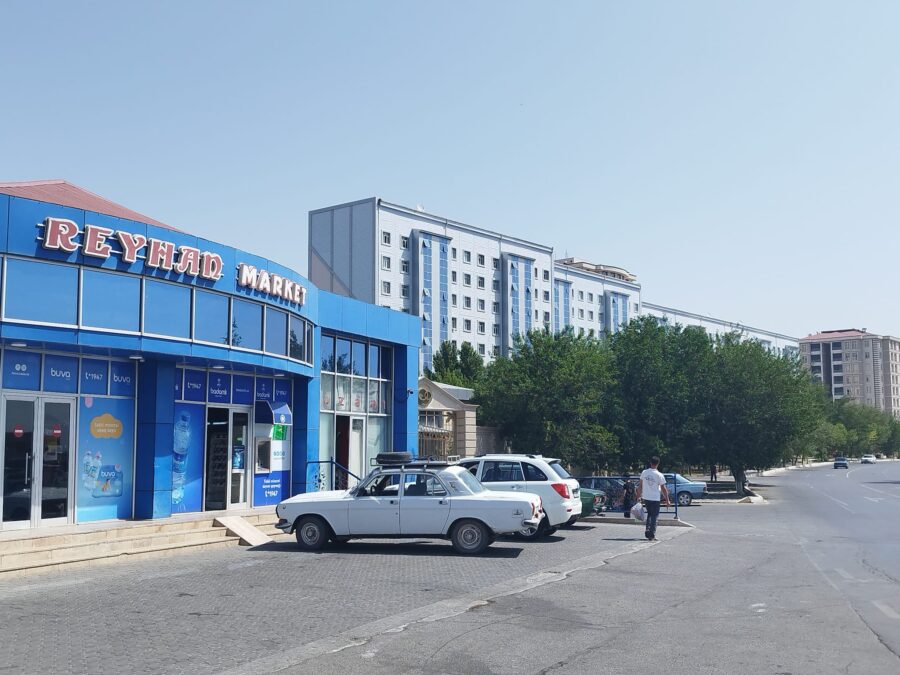 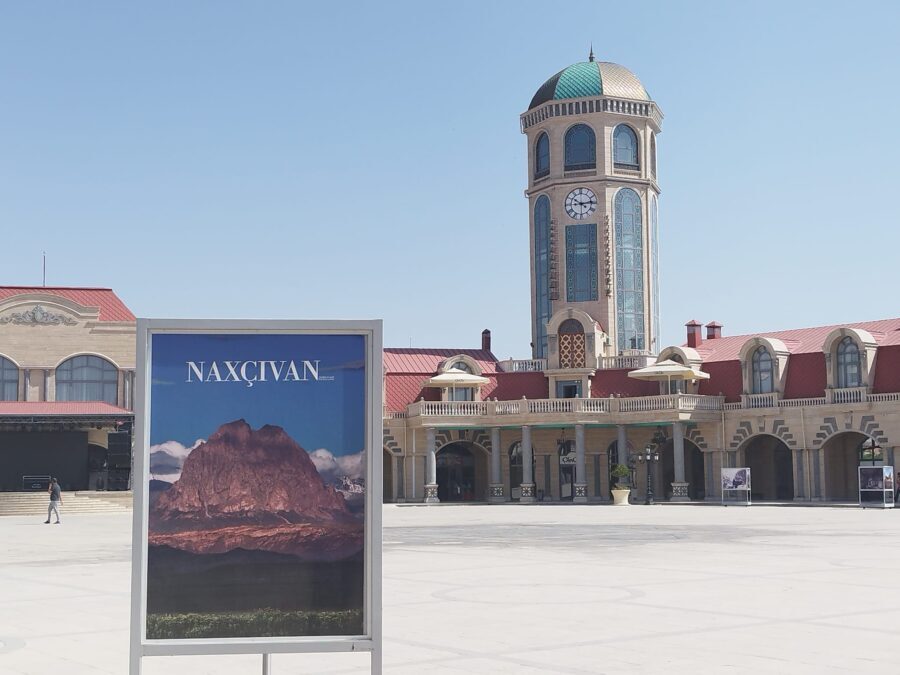 Nakhchivan is a city of mausoleums. ,, We all die, leaving only the wind behind us." That is the inscription on the most famous tomb Momine Khatun. The 12th-century, medieval, 34-meter skyscraper is a masterpiece of Islamic architecture.

The founder of the Atabaylar state wanted a resting place worthy of his wife Momine. But in the end, the ruler was also laid to rest here after the wife's death.

At the time, the mausoleum was considered the tallest building in the Middle East, and it is almost unique that it has been preserved in such conditions. There used to be a whole palace complex around it, but only Momine Hatun was not caught by the wind and time. (Ata, 2022) 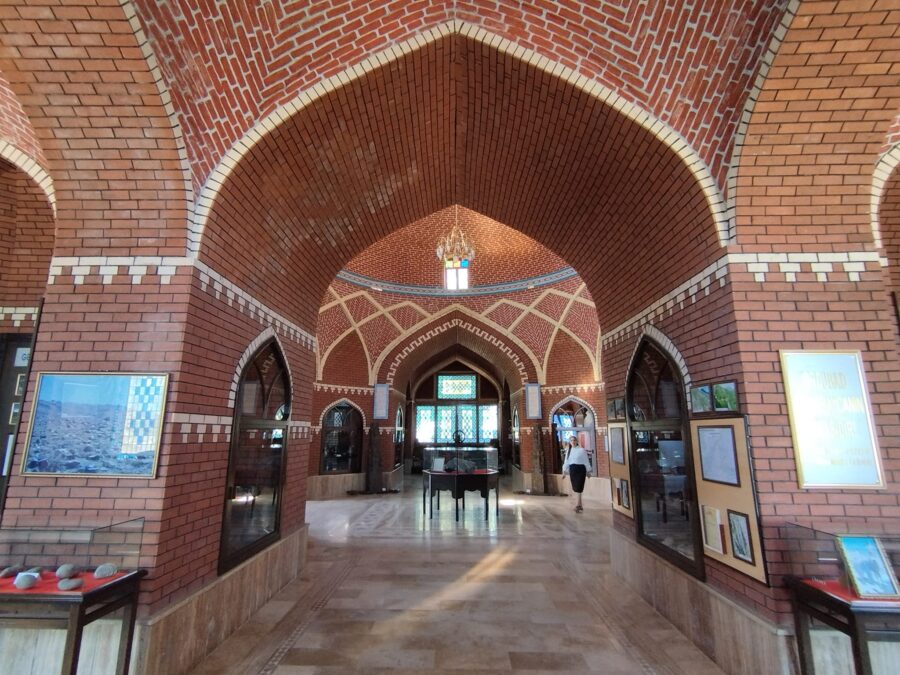