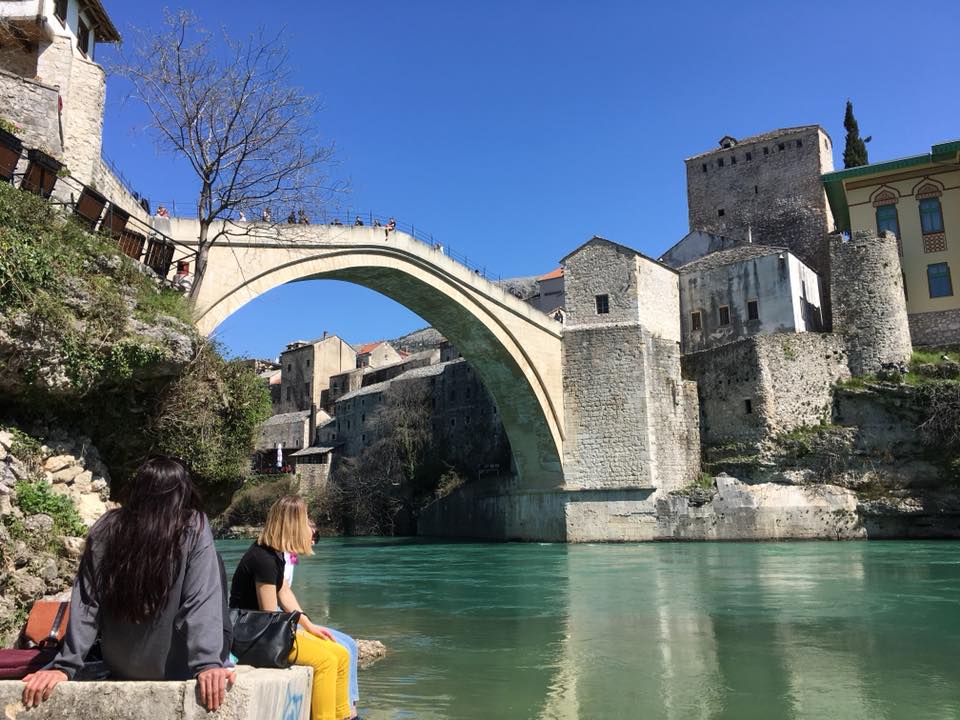 1. The Turkey-like atmosphere of the narrow streets in the old town

2. It was exciting to make a deeper understanding of Mostar's turbulent history

3. Take the off-the-beaten-track within the city and thus avoid the annoying tourist crowd and the bored souvenir shops

4. All our restaurant visits were extraordinary

5. Merchants are more pleasant than vendors of bazaars in the Arab world.

1. Sad to see the buildings full of war shots, just beside the new houses

2. Too many tourists intruding on the bridge, so we were unable to fully enjoy the sight

3. Terrible to see as the guys jump from the bridge into the water only 3 meters deep (they only jump if they collected enough money from the tourists)

4. Since our accommodation was in the middle of the Old Town, we heard the loud call to prayer of the muezzin more than we wished

5. The choice of souvenirs is almost the same in all the local shops.

6.  It was uncomfortable to walk on the cobblestoned street leading to the Old Bridge (you better wear a hiking shoe) 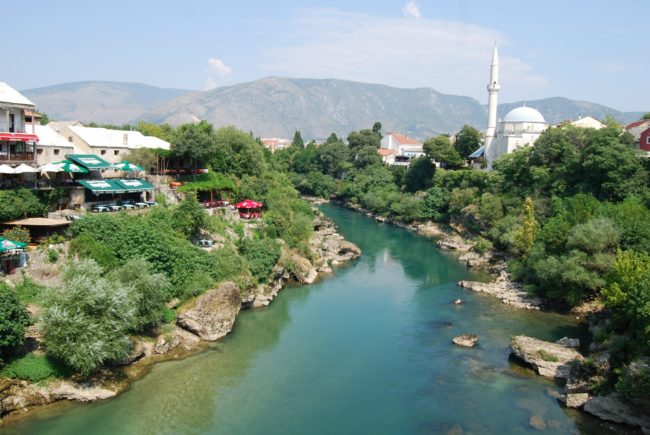 “We have no idea what two days in Mostar would have been like if continual rain hadn’t spoiled our visit. We can draw some basic conclusions, though: The city itself, outside of the old bridge and its immediate surroundings, is essentially without interest. The bridge itself is genuinely spectacular, really a great experience, the pedestrian souvenir shops around it sell the usual junk, and the crowds are definitely too much in good weather.
It’s totally worth visiting Mostar, even just for the bridge. We spent a night there, but it seems that most tourists spend a maximum of 5-7 hours. Even then, it’s definitely worth stopping off, because there are some beautiful sights in the vicinity, and the Neretava Valley between Sarajevo and Mostar is spectacular.

As in Sarajevo, the horrors of the early 1990s are inescapable in Mostar. There are still many ruined houses, though even while we were there we saw a bulldozer demolishing one. The Croatian side is more developed, but it’s poor too. (Aji, 2017)”

“Mostar immediately swept me off my feet. After Sarajevo and Banja Luka, this is the third-largest city in Bosnia-Herzegovina. Even before we set out I’d read a little bit about Mostar, and knowing something of its recent history made our visit even more interesting.

The ethnic and religious divides mean there is still tension in Mostar, which is 60% Croatian and 40% Bosnian Muslim (before the wars of the 90s, 20% of the population was Serbian). Approximately 20 years ago the Croatians and the Bosnian Muslims were at war with one another. Muslims live on the east side and Croatians on the west side, and peace remains fragile. Fortunately, tourists will perceive little of this on a short visit.

I was prepared, of course, for the moment when the Old Bridge, familiar from so many photographs, appears before my eyes. This bridge, which stands 24 meters above the Neretva River below, is the defining image of the old town. The bridge was built by the Ottoman Turks in the 16th century, and it gave Mostar great importance. The bridge is only 30 meters long and four meters wide. It’s a unique feeling to cross its steep, cobbled arch.

The buildings of the old town are all painted to match the bridge. There are plenty of mosques in Mostar, but they’re smaller and more picturesque than in Sarajevo.

We climbed up to the top of one minaret, and from the narrow balcony at the top the view was spectacular. The turquoise waters of the Neretva contribute greatly to the magic of the Old Bridge (Stari Most).

The illusion is only spoiled a little by the knowledge that the whole thing is little more than a film set, since in the civil war the old buildings were mostly demolished, so for the most part the visitor sees modern copies.

In 1993 the Croatians destroyed the old town with artillery fire, and also demolished the bridge. Bastards! For 430 years there wasn’t an invading army, however barbarous, that did to that beautiful bridge what it suffered in the late 20th century. A bitter tale.

The bridge was rebuilt by 2004, by an international team of experts. We were shown a former bank building on the Croatian side, which was used by Croatian snipers to pick people off on the far bank.

In any case, the Croatian side of the city is much bigger and wealthier than the Bosnian side. Croatian flags on the west bank of the river proclaim their national pride. We spent one night in a little town called Pocitelj, which is rich in ancient Ottoman monuments. The location of this small town is very beautiful.” (Ricks,  2013) 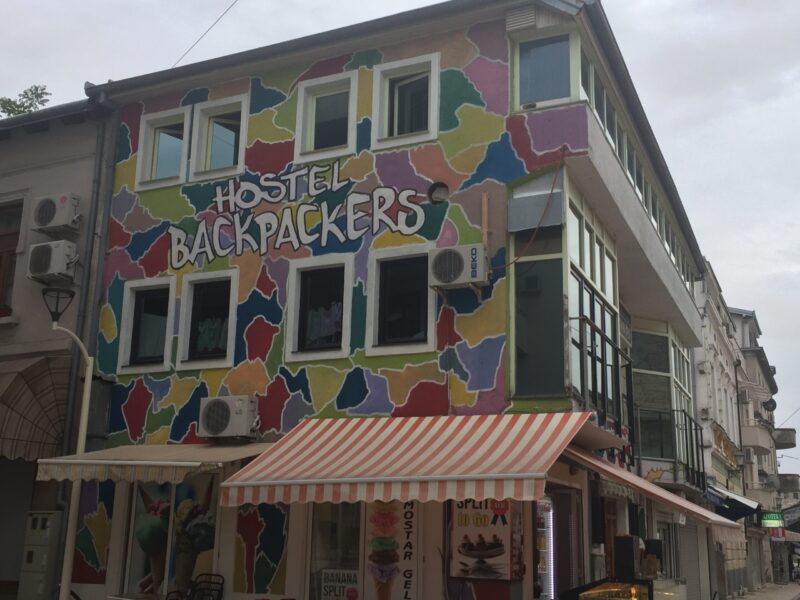 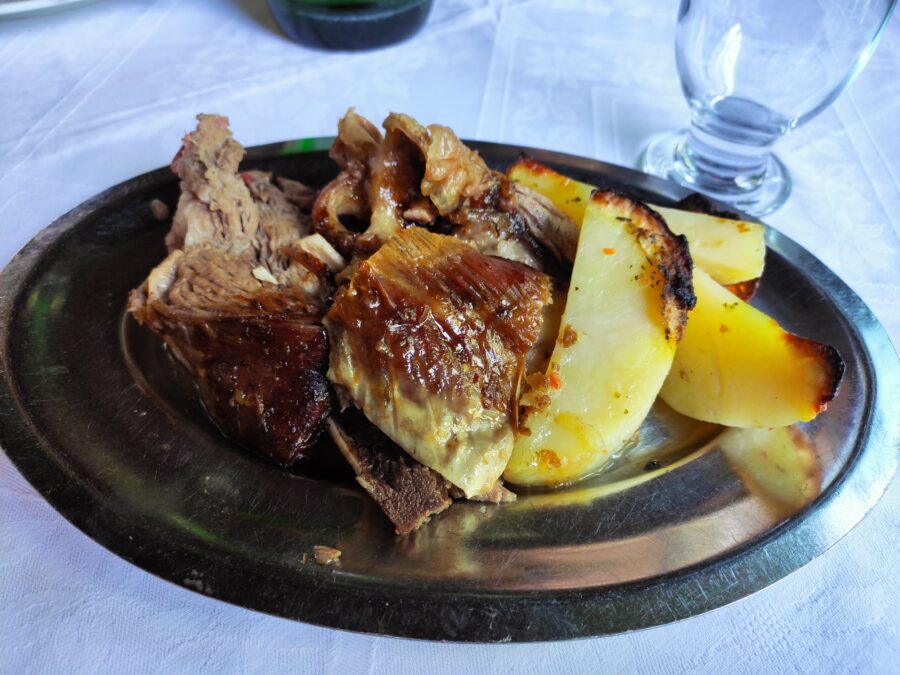 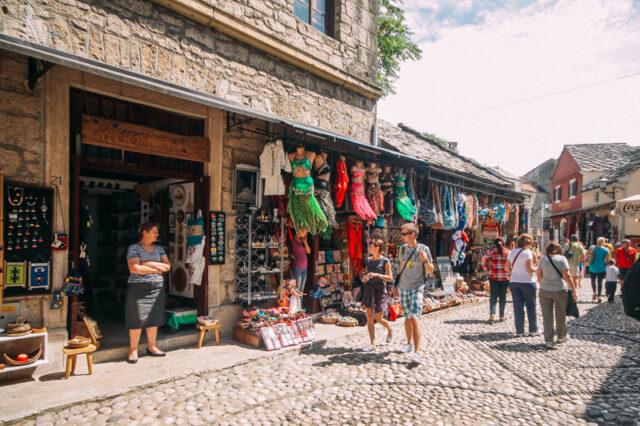 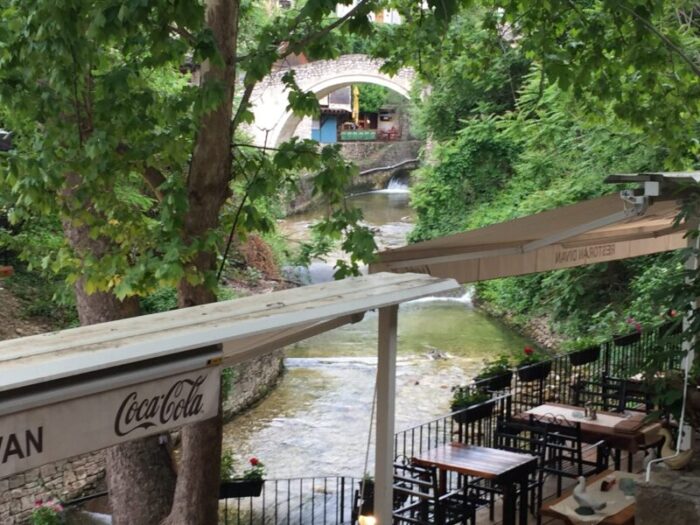 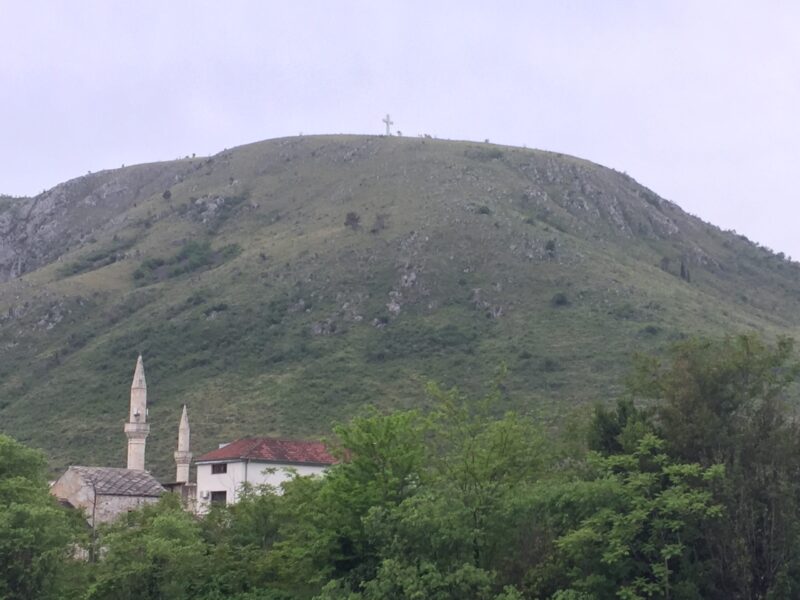 Mostar - By setting up the huge cross on the hilltop, Catholics are sending a message to the valley - Krista photo 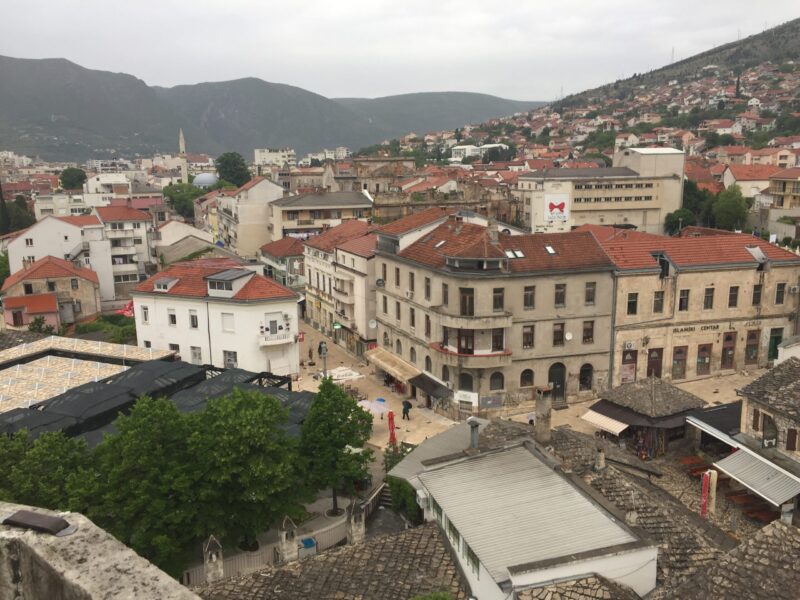 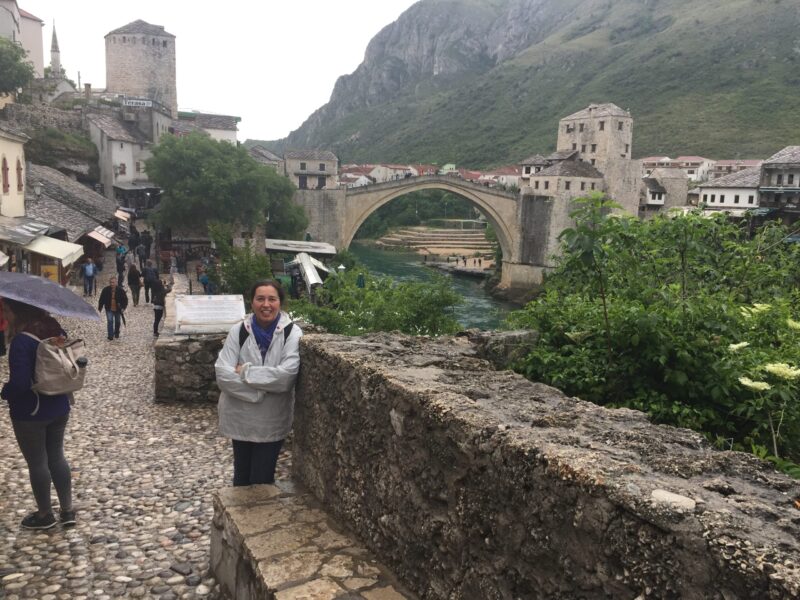 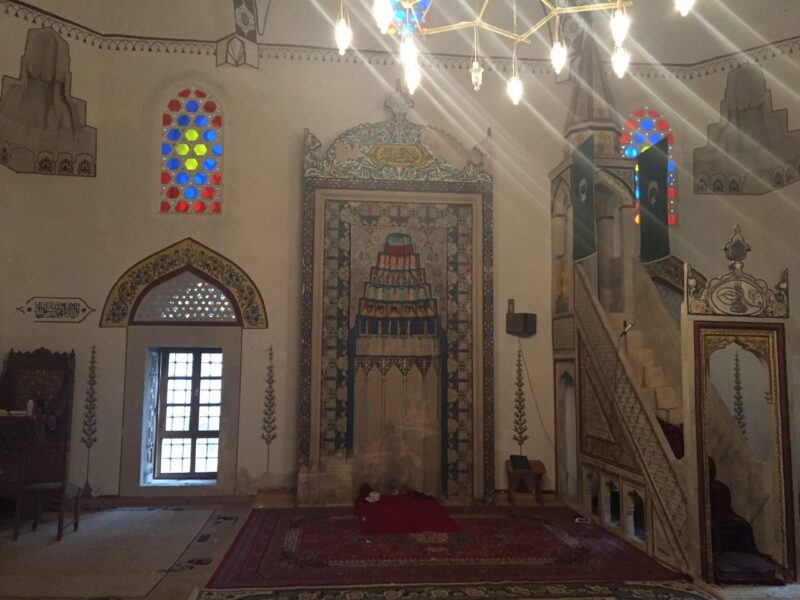 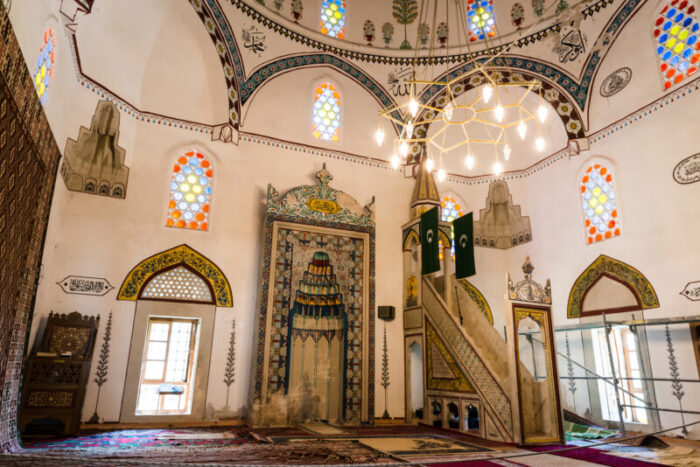 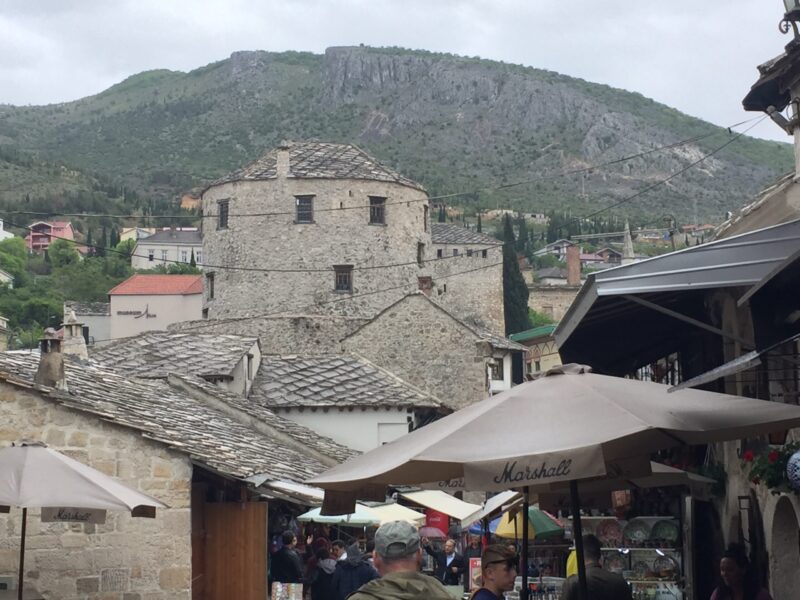