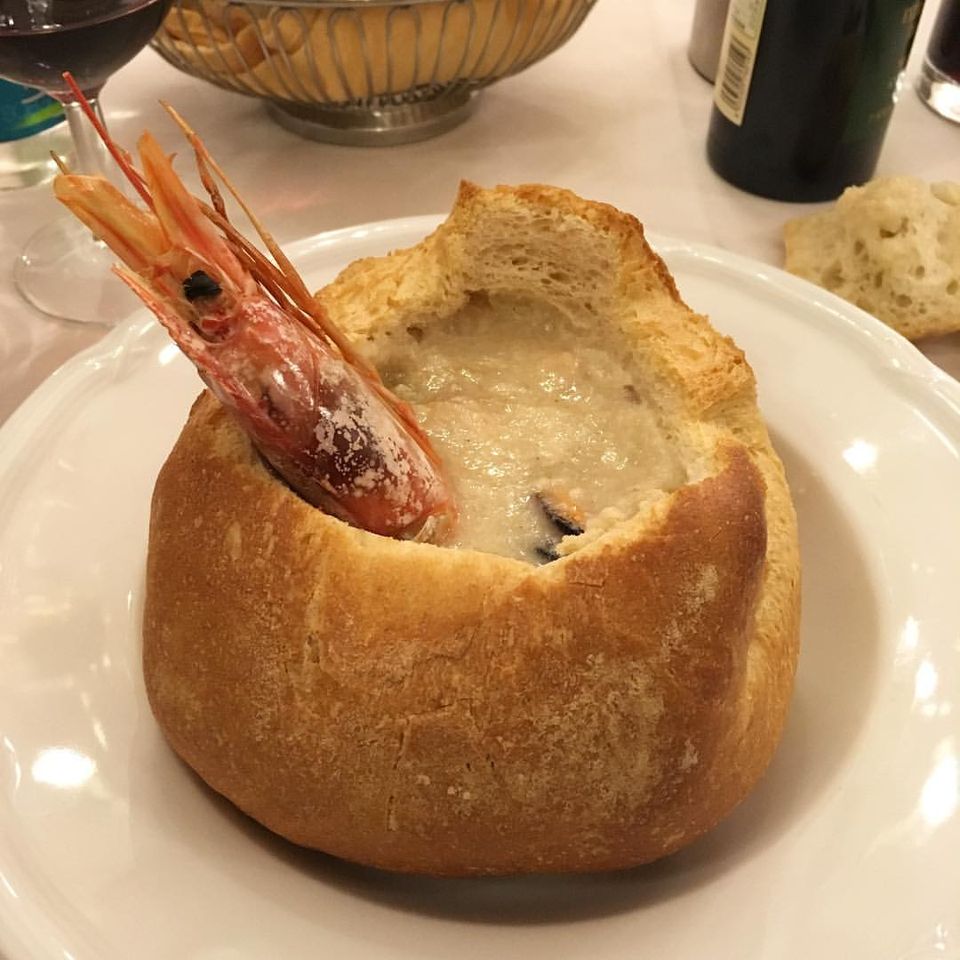 1. The Western port is impressive and well-organized

2. They have a lot of parks; the environmental issue is not merely a slogan

3. Fun to observe the locals as they zealously enjoy the short summer, the long summer days (from mid-June to mid-August)

6. The atmospheric main market, the Kauppatori

8. The locals are polite and helpful

9. There are plenty of free WiFi hotspots

11. Allas Sea Pool: a new swimming pool and sauna complex in the port of Helsinki - A large outdoor swimming pool heated all year round!

12. Punavuori is a charming neighborhood near the center of Helsinki, characterized by its pastel-colored buildings, plus lovely little shops

1. After two days of efficient sightseeing, there aren’t many exciting programs remain. (We mean, in case you don’t intend to make more in-depth impressions)

2. If you don't come here in the summer, you may suffer from the harsh climate, the depressing effects of the short daytime, the cold winds may make your bones  ache, and many puddles from the melting snow on the sidewalks

3. There aren't many monument buildings, Helsinki's architecture, on the whole, is quite monotonous

5. On weekend nights, the boringly drunk, sometimes aggressive Finns, the many drug addicts

6. The locals are mostly reticent, introverted, at least when they are sober

7. Many stores are temporarily closed for all sorts of reasons.

8. In nightclubs, it is usually mandatory to drop off the bag in the cloakroom.

9. Not too many really cozy cafes (although the Finns are big coffee drinkers) - Exception: the cafes of Punavouri

10. Surprisingly many social problems, poverty, unemployed immigrants in the eastern part of the city 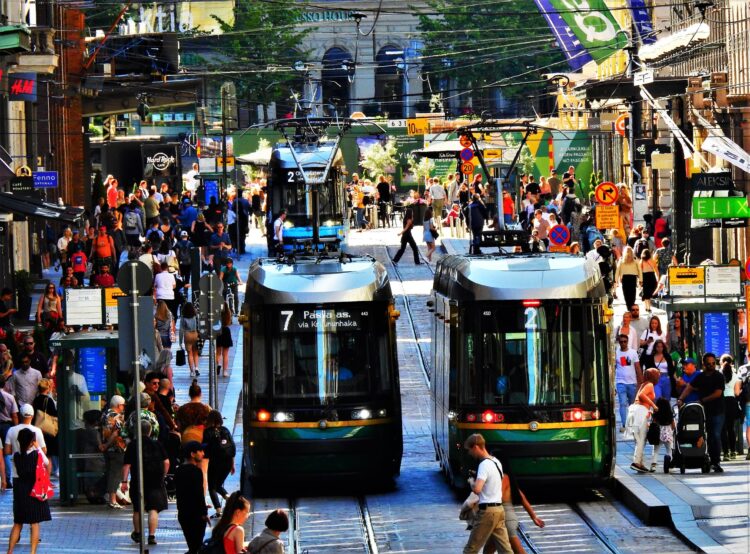 “In the opinion of many friends and acquaintances, Helsinki is a rather ‘underwhelming’ destination, compared to other European capitals, and I will grant them that the city may not be as rich in ‘sights’ as other places(?) while what is there, in terms of ‘famous building/church/whatever maybe isn’t all that visually captivating or iconic(?) as the sights in certain other big European cities. What I will say, however, is that I TOTALLY FELL FOR HELSINKI. Honestly, every street corner seemed to offer some spontaneous new surprise. A grocery store selling Japanese cuisine of amazing quality and quantity, a café bearing the slogan ‘why join the navy when you can be a pirate?’ (this is also the name of the café) and a hundred other funny or surprising things which, while they’ll never warrant inclusion in a travel guide, added up to give me the feeling that this is a city full of mischief, fun and good things and good humor.” (2018)

“This is a city with a great atmosphere. Clean air, and though there are plenty of cars and buses, you rarely smell any fumes or pollution. Then there are the many forests, lakes and natural rock formations which can be found everywhere, and which fill you – even if you’re just visiting – with a sense of calm. People have things to do, but they don’t rush. Things seem to move at a snail’s pace compared to a more bustling metropolis, though locals will tell you that in Helsinki, everybody is in a hurry. 😊 People approach one another with empathy here, rather than with suspicion or disdain.

They also have an interesting approach when it comes to dealing with minorities. There are usually two signposts on every street – one is in Finnish, while I suspected that the other might be Swedish – a guess confirmed by Finnish colleagues. Whichever language has more speakers in that area, its sign goes on top.

You’ll also see a lot of cyclists and runners out on the street. A female jogger caught up to me while I was waiting at a red light, and she didn’t stop, but ran on the spot until we got a green light to cross. Probably it’s some combination of diet and this active lifestyle, but many Finn’s don’t look their age – a fact pointed out to me by a colleague. That’s probably also why I looked at a shop assistant and thought she looked about 14.

,, In my view, Helsinki is boring, Sorry to say: a null compared to other Northen European capitals."

With the Helsinki Card, trams, buses, metro and boat tours to Sveaborg are free. 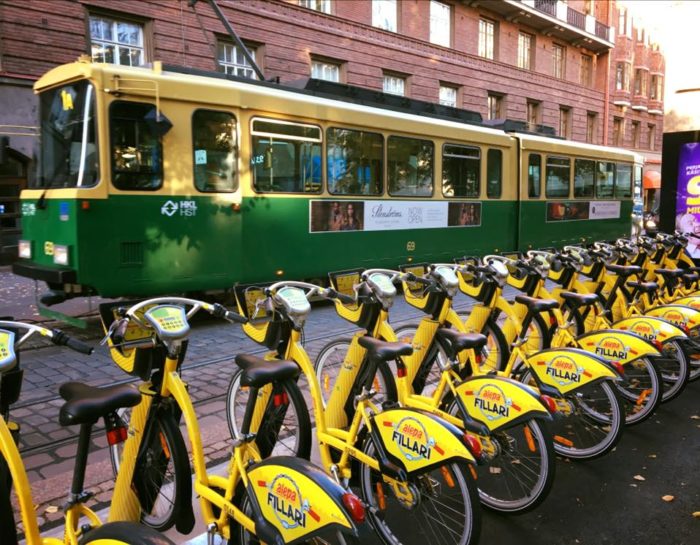 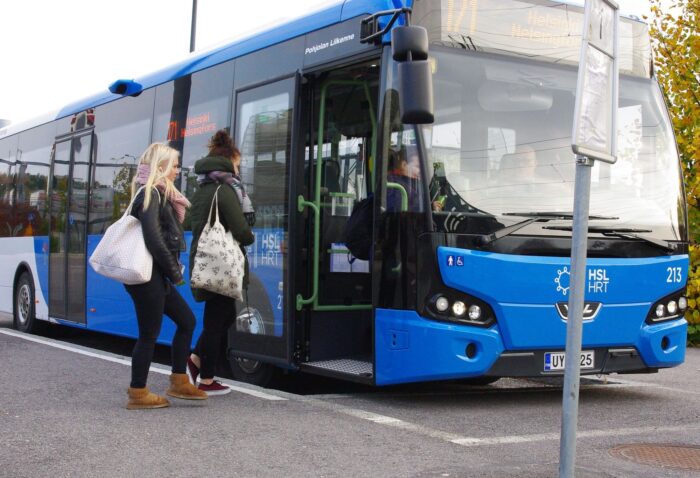 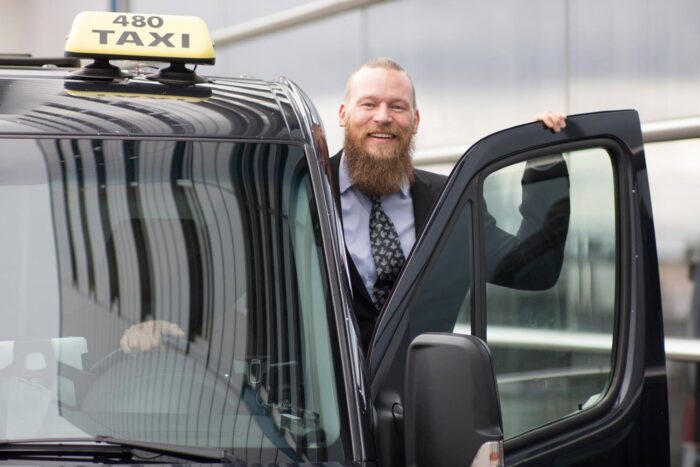 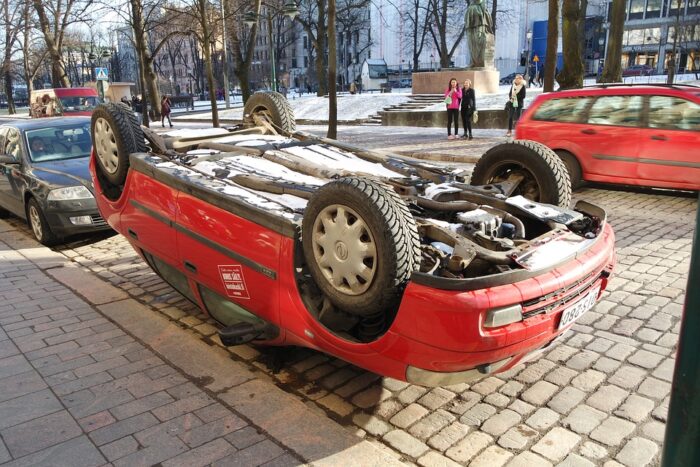 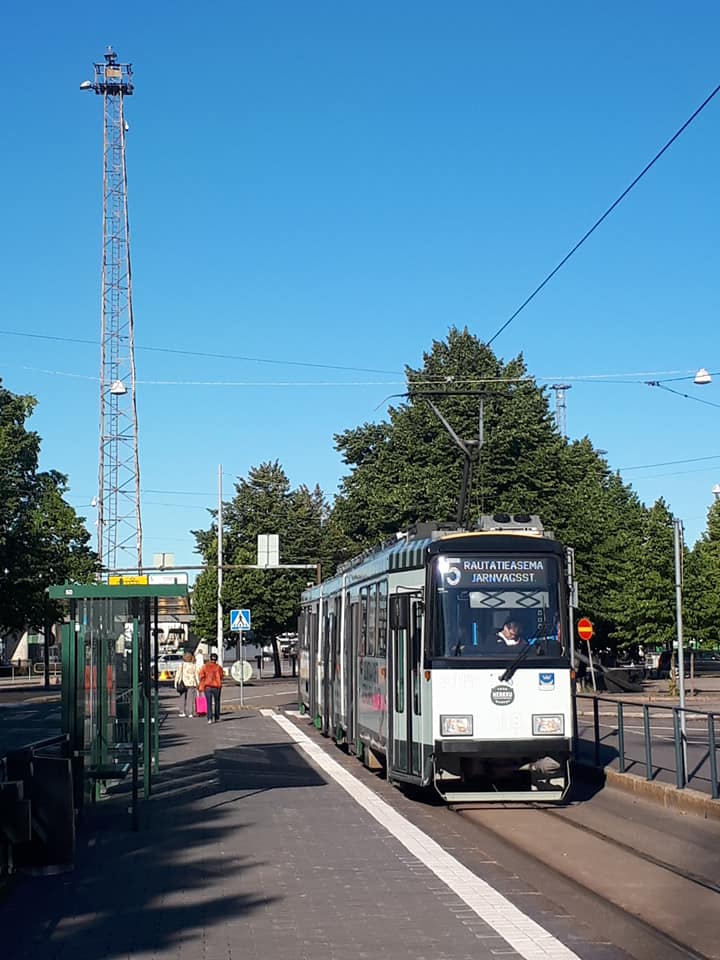 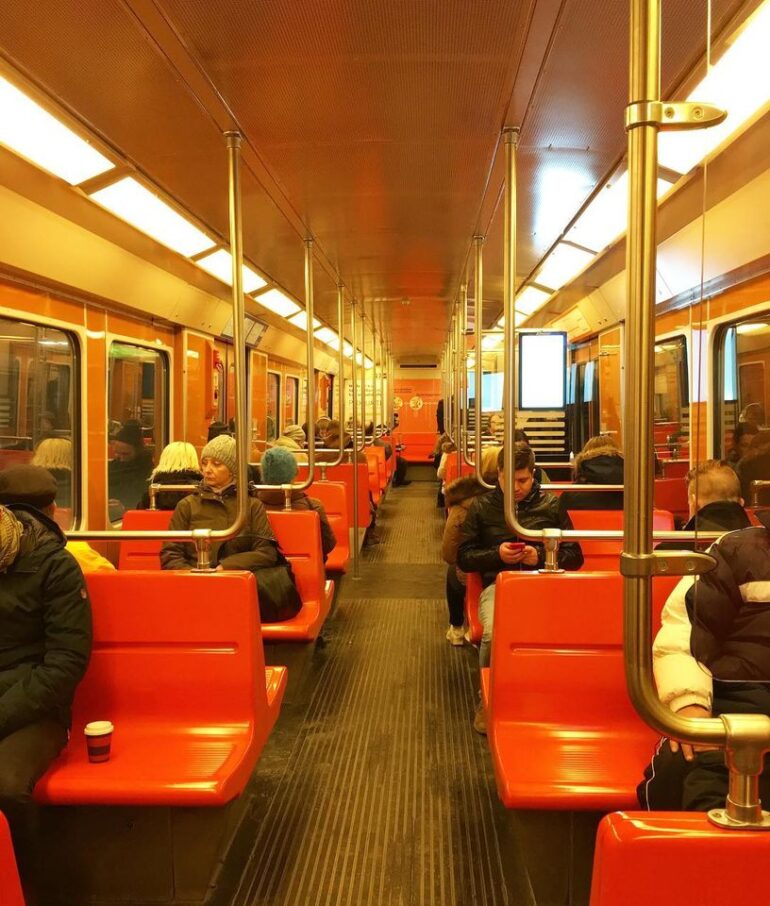 2. The Market Square (Kauppatori) facing the port, eat a salmon soup accompanied by bread from the islands (saaristoleipä)

3. Toca (Unionsgatan 18) - a fusion of Nordic cuisine with Italian cuisine 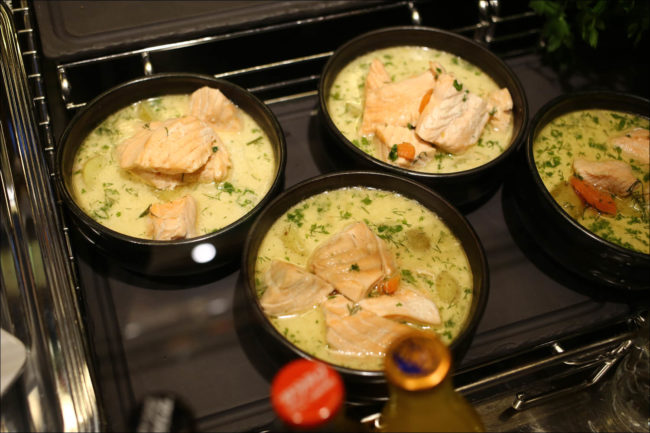 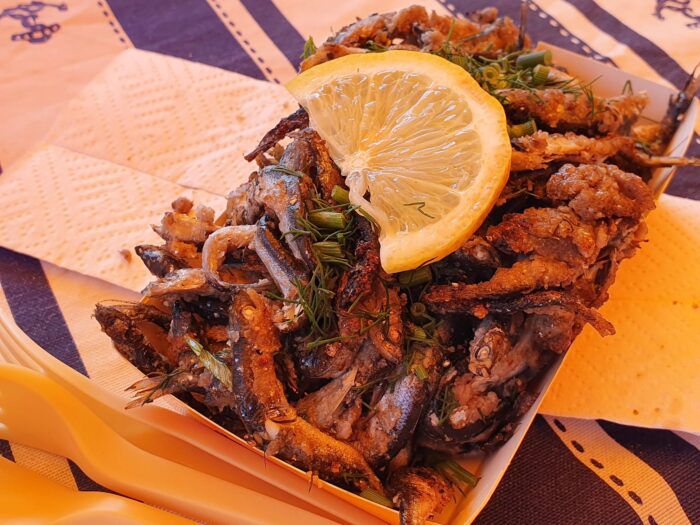 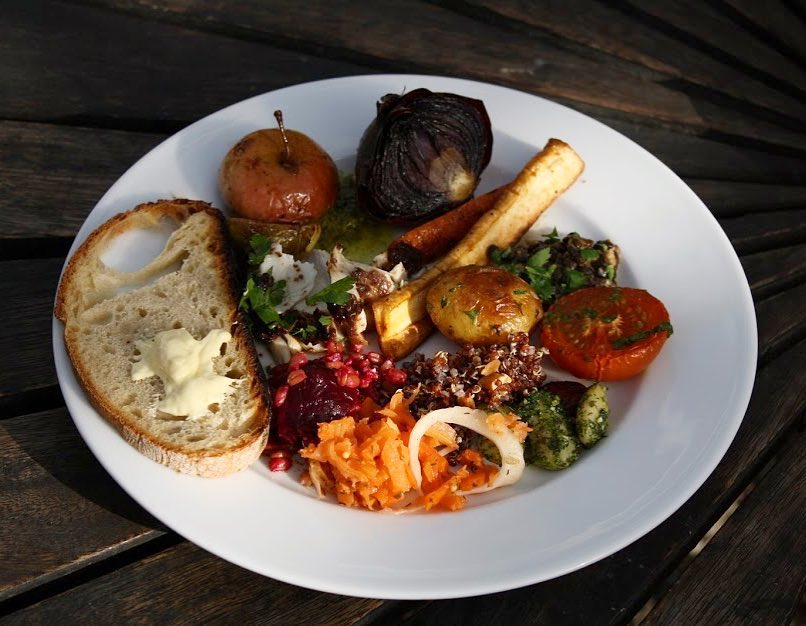 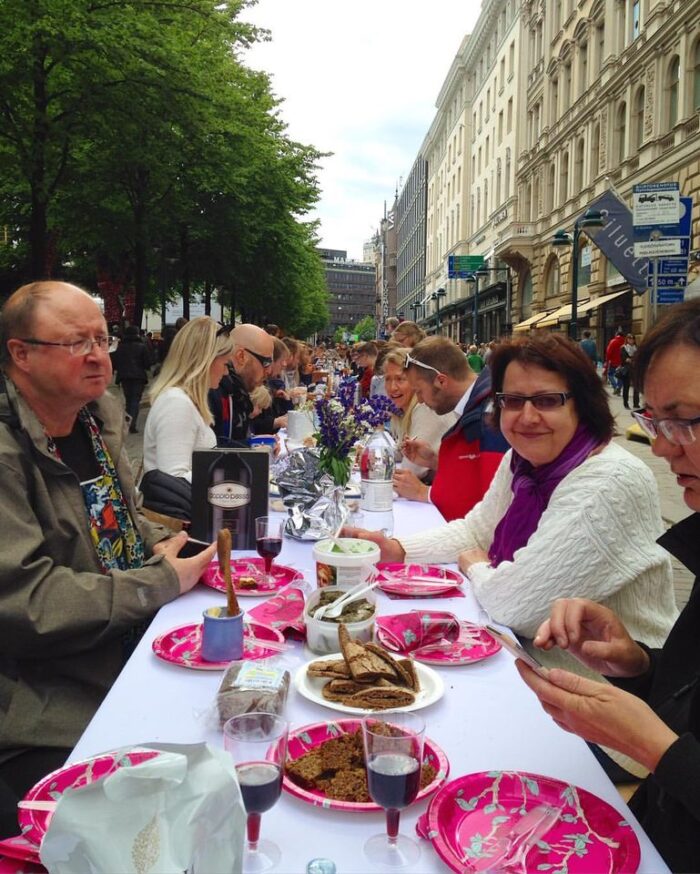 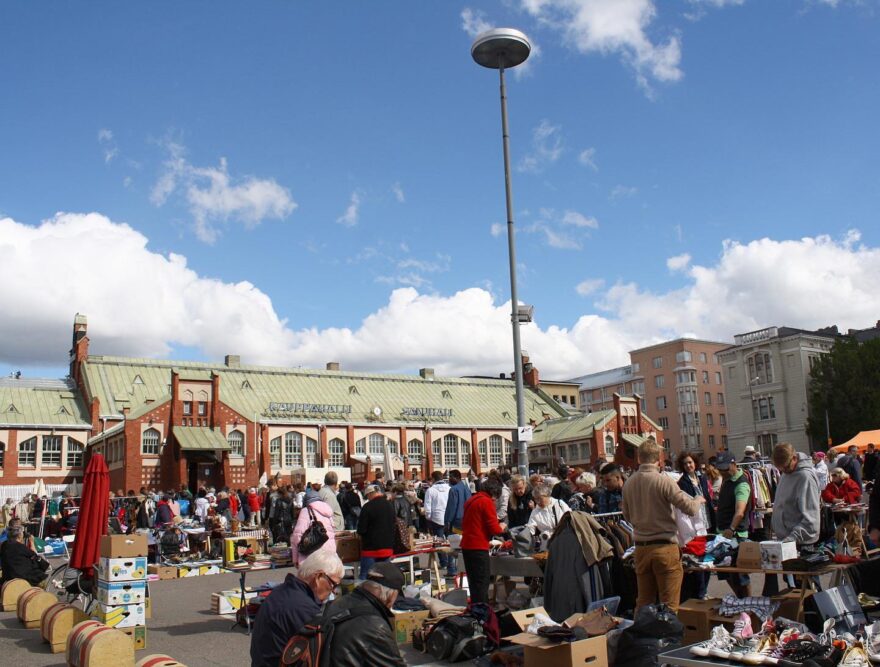 There are enjoyable dance-music clubs for ages over 50, too. 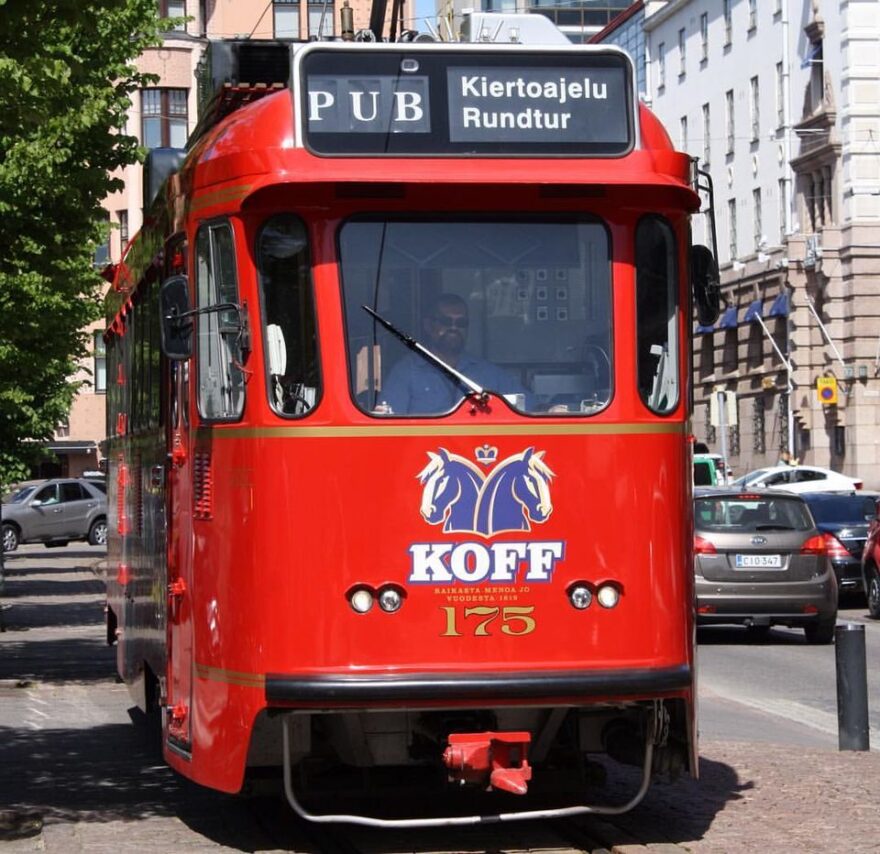 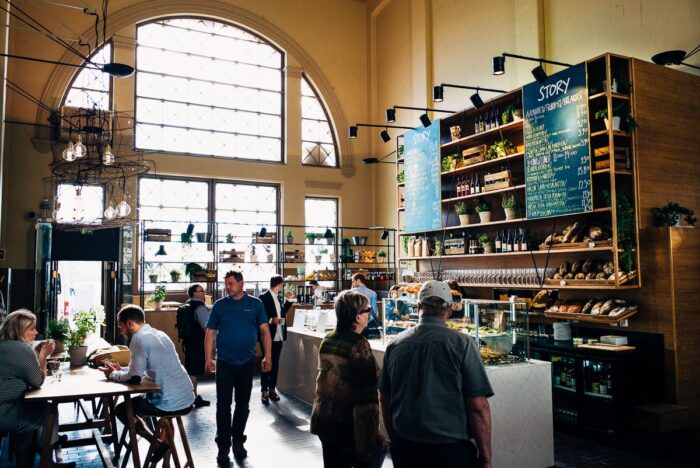 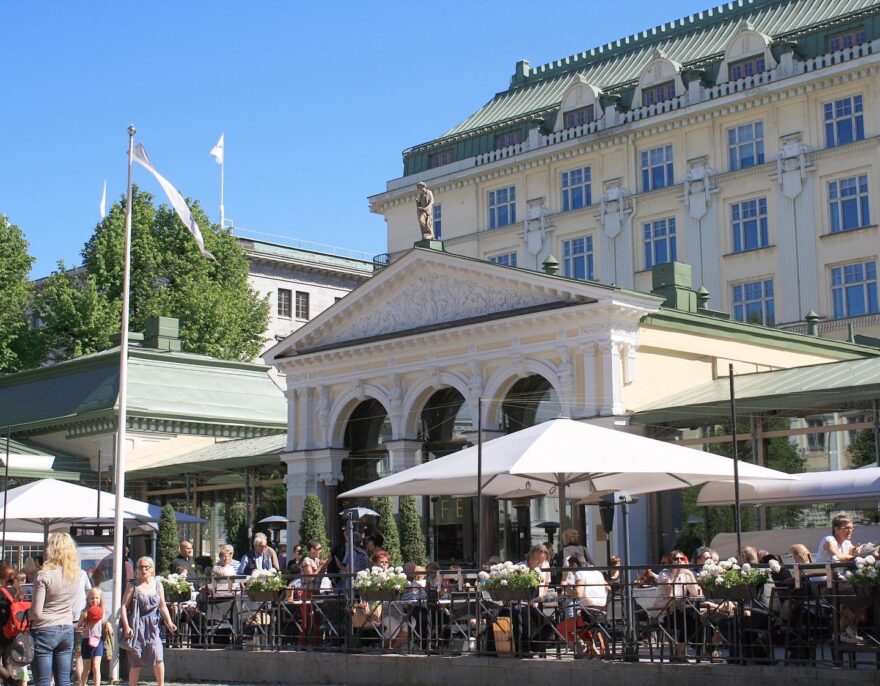 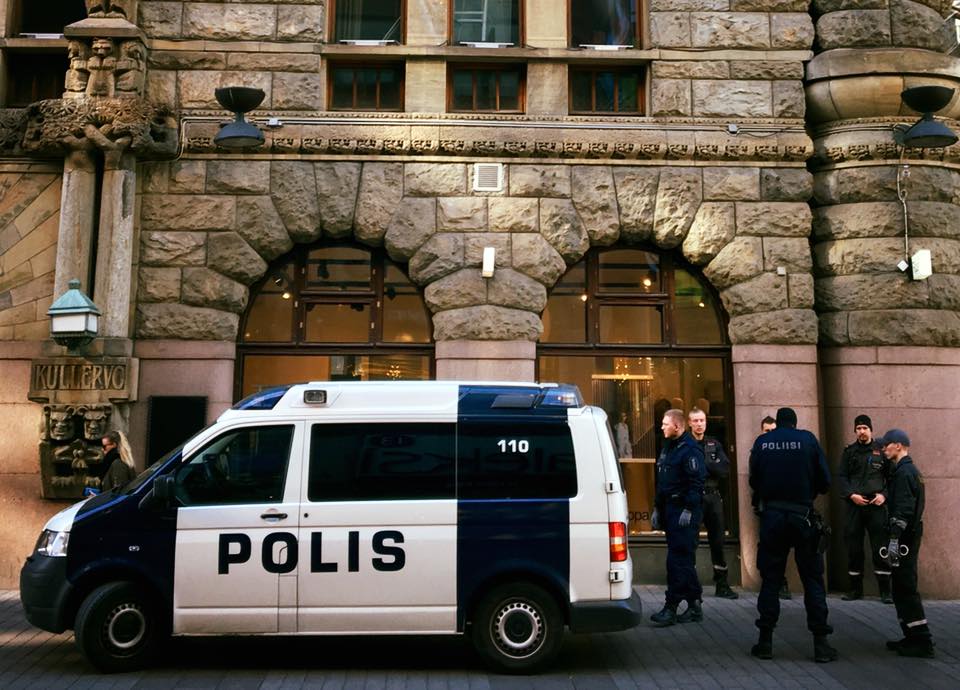 Tap water comes from mountain springs and is of very high quality. Saudi Arabia, for many years now, has been buying drinking water from Helsinki. 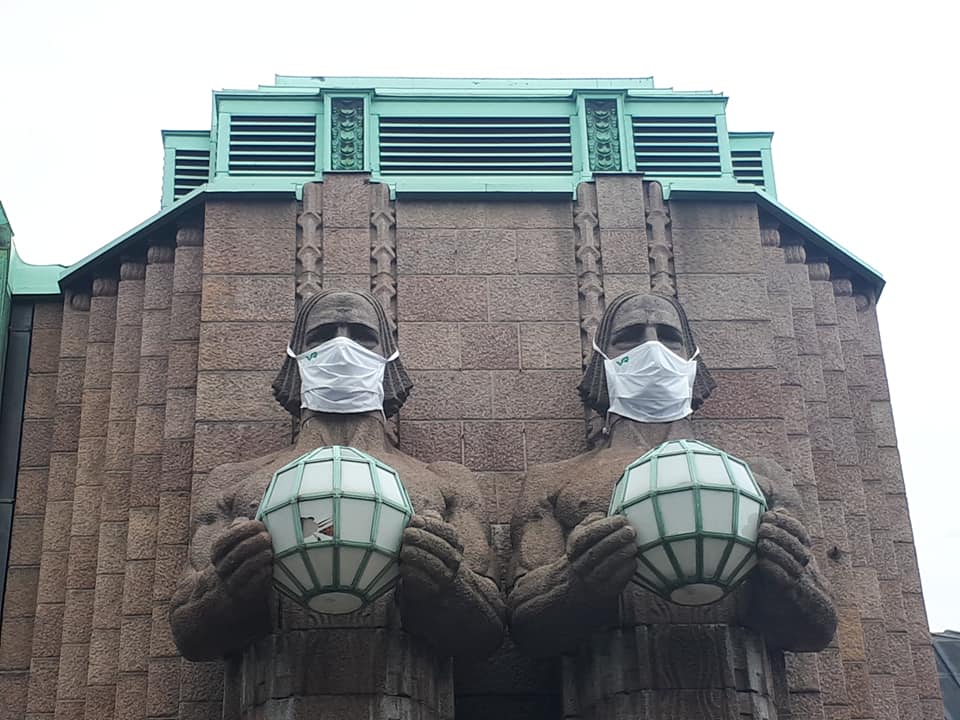 1.  You will find the main tourist information center in the central station, Kaivokatu. 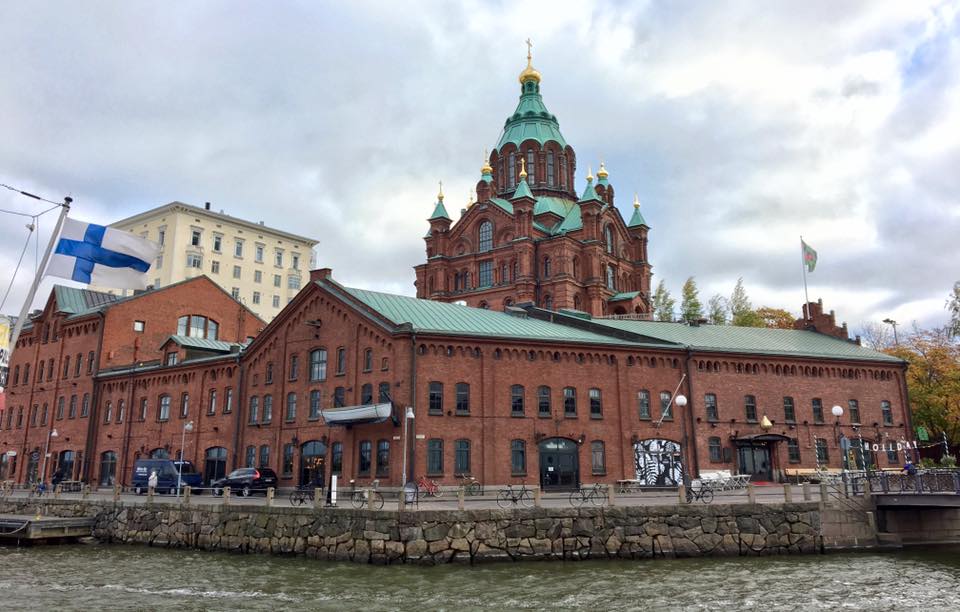 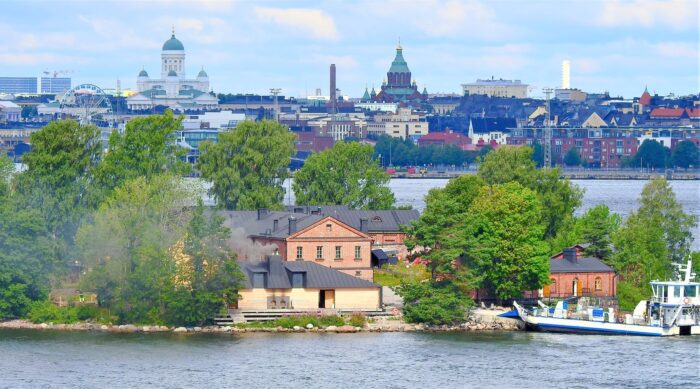 Helsinki from the sea - r.s. photo

Helsinki, the capital of Finland is in the south of the country, on the northern shore of the Gulf of Finland

Population (in 2020): 1.3 million - Helsinki has 6.2% Swedish-speaking residents and is officially bilingual. The Swedish name for Helsinki is: Helsingfors.

Finns have one of the longest words in the world at 61 letters:  lentokonesuihkuturbiinimoottoriapumekaanikkoaliupseerioppilas, which means ‘airplane jet turbine engine auxiliary mechanic non-commissioned officer student’.   It is not in everyday use...

Helsinki is the world's coldest capital, with a yearly average temperature not exceeding 0 °C (32F). In 51 days per year, no sun visible in the sky. Annually, there are around 120 rainy days.

(In winter, there is no snow on the sidewalks and boulevards of central Helsinki. The city heats the granite slabs from underground, so the snow and ice immediately melt.)

Helsinki could develop so much more than Turku, thanks to being closer to St. Petersburg (the Russian tzar ruled Finland).

Helsinki is perhaps the only city in the world where statues of ancient times are originally preserved; none of them were demolished for any political, ideological (or hysterical...) reason. In Helsinki's main square, you can see a Russian tzar statue,  a Swedish coat of arms on the Finnish government buildings' facades, and the original Cyrillic names in the downtown streets. 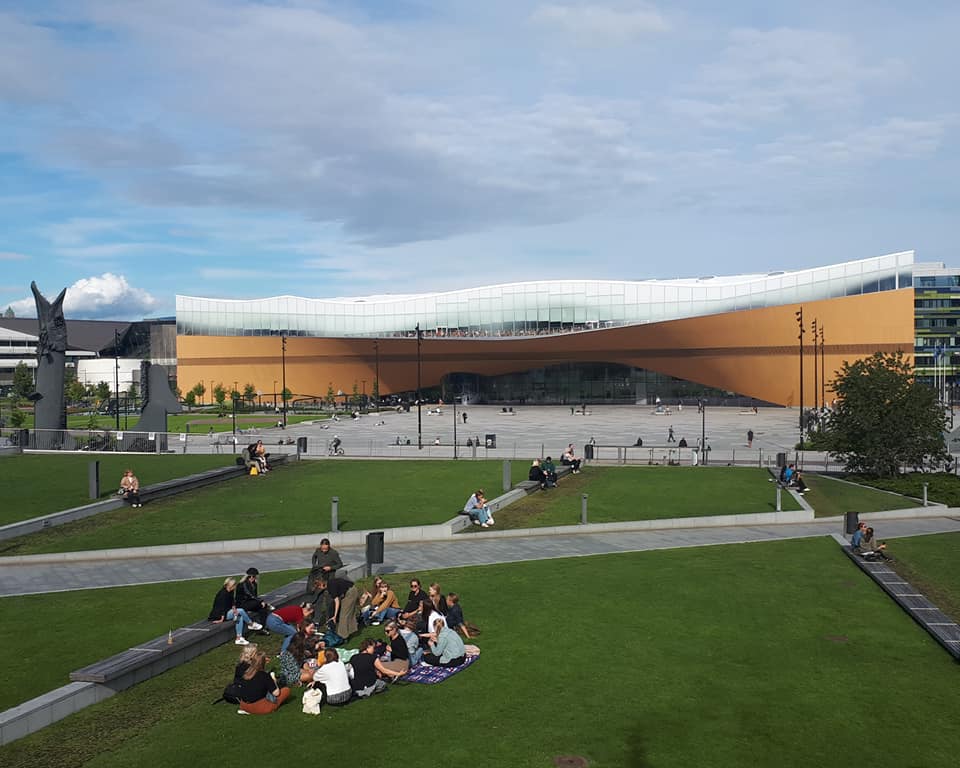 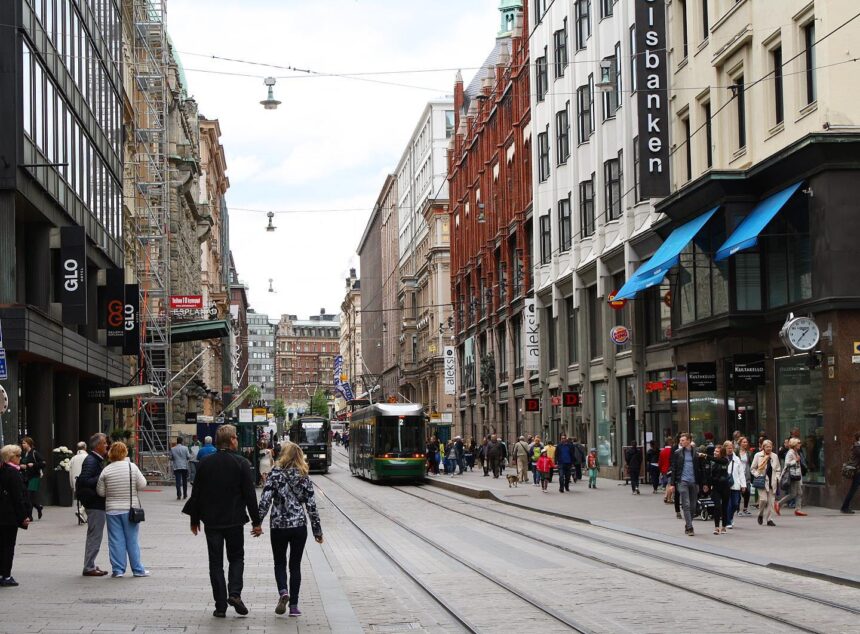 Helsinki - Aleksanterinkatu (Swedish: Alexandersgatan) is a street in the centre of Helsinki - in September - j.k. photo 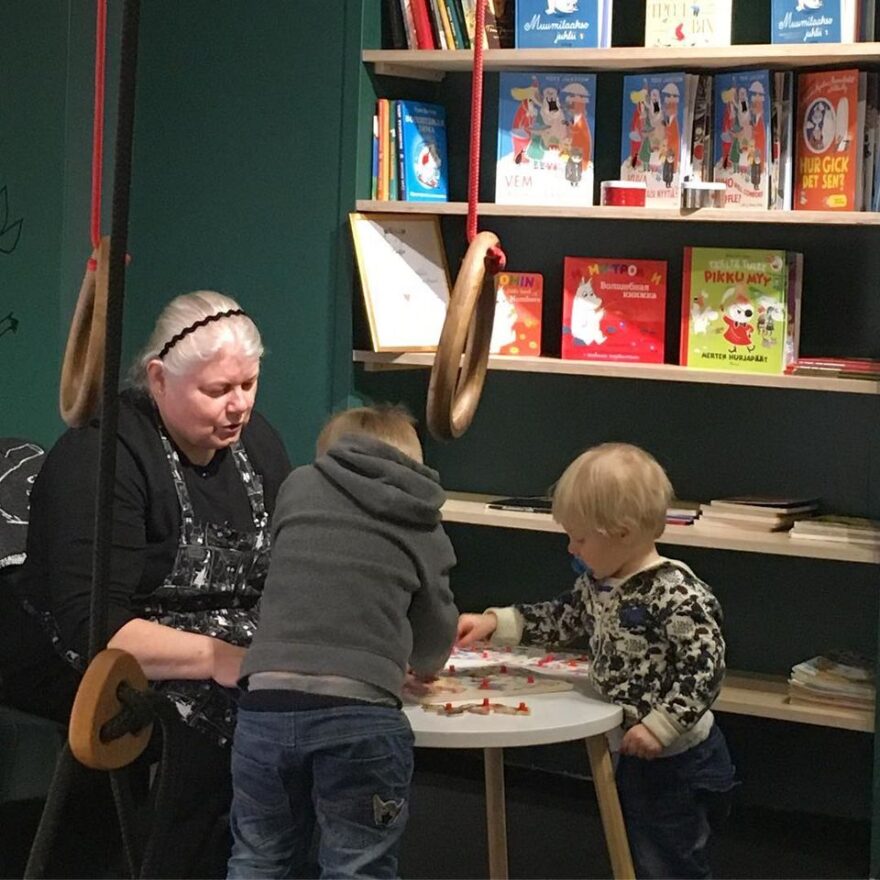 Helsinki - kids corner in a cafe - the lady is not a grandma, but staff person in charge of playing with the kids - j.k. photo 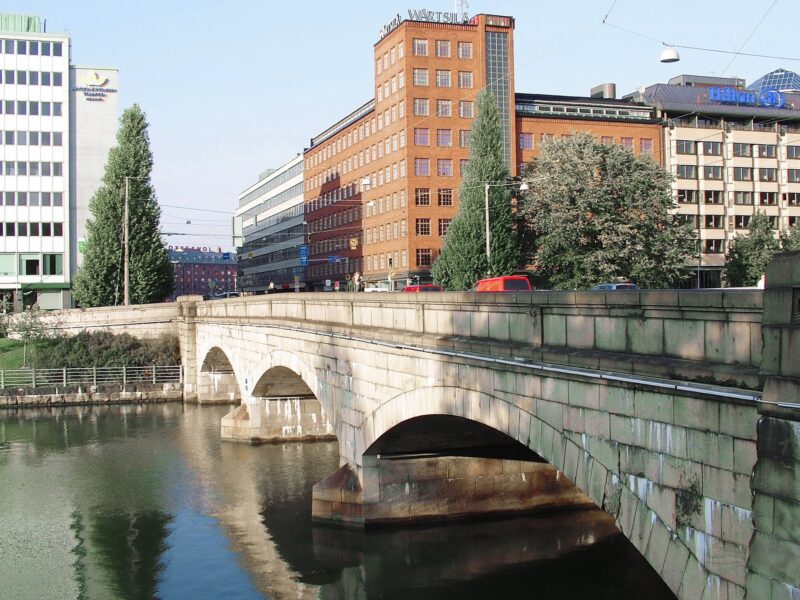 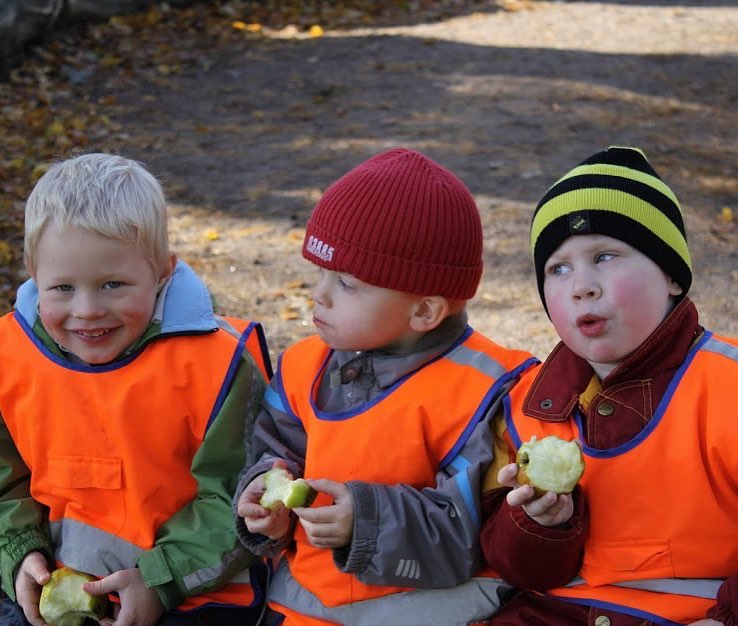 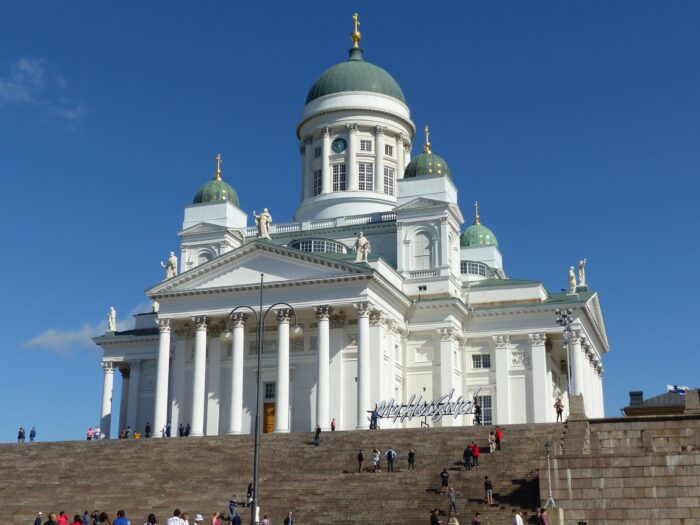 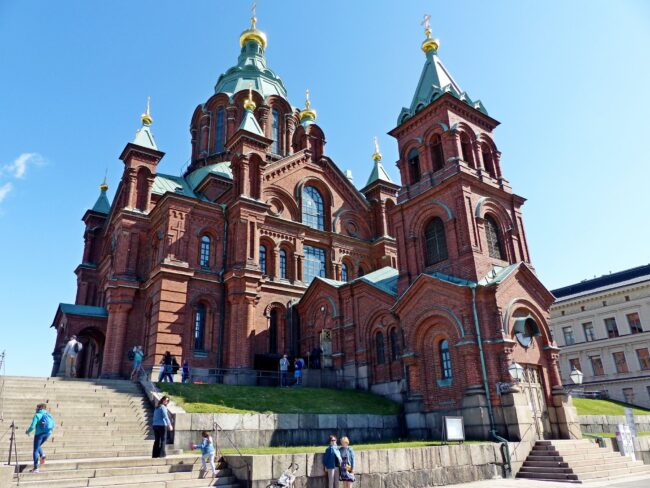 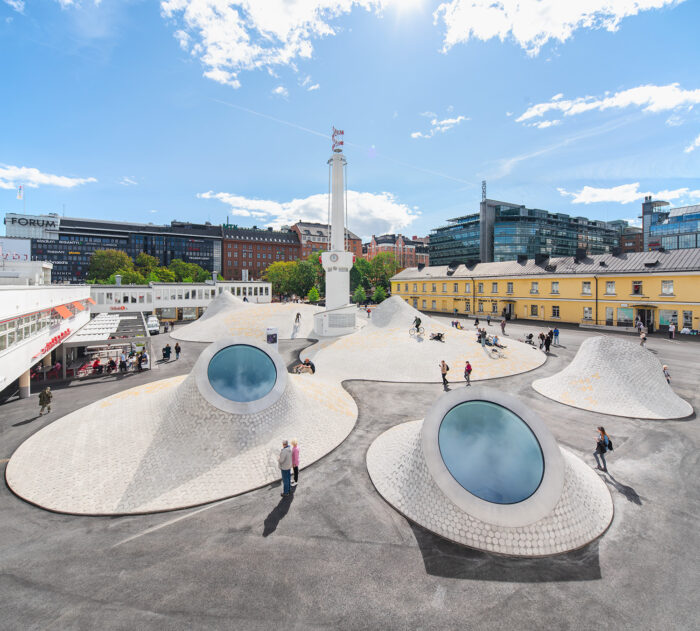 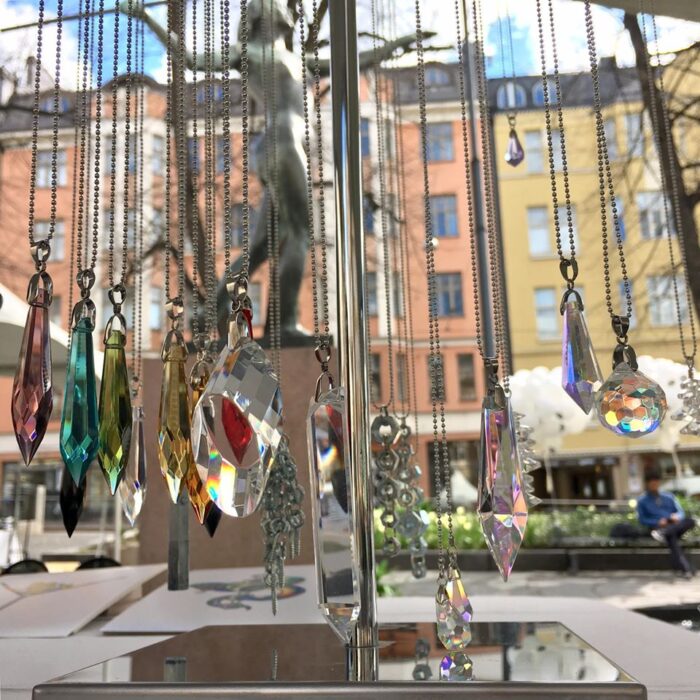 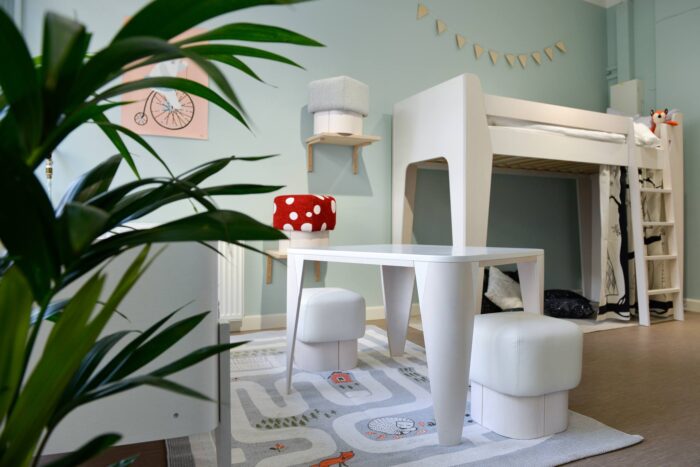