1. The growers’ market on Kaiser-Josef-Platz
2. The ultramodern design of the art museum is spectacular (like a UFO base parked amid classical architecture)
3. Staying at one of the inns in the Kapuzinerhof
4. Feeling safe on the streets at night
5. The mountains rising in the background behind the city
6. The beautifully maintained, pretty facades of the buildings in the old town
7. Admiring the view from the hill

8. The artificial lake and tasteful benches at Karmeliterplatz
9. Drinking a coffee behind the city hall at Buna Kaffeeladen
10. The atmospheric old buildings with passageways through them to connect different streets 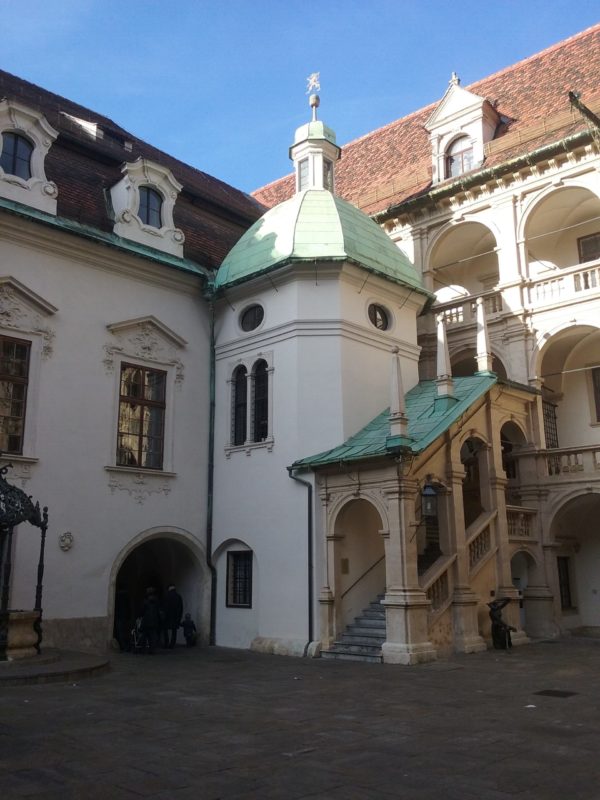 1. In a restaurant we had to pay for three slices of bread (bit stingy, no?) and one slice is €0.50
2. Graz seemed to us more expensive than Vienna (though the coffee was cheaper)
3. A surprising number of restaurants are shut on Sunday
4. There are some rather dilapidated streets close to the city center
5. Outside of the old town, a lot of boring, run-down old apartment blocks spoil the view (a familiar problem)
6. You have to watch out for crazy student cyclists
7. Fewer and fewer traditional restaurants serving traditional Austrian cuisine, but a kebab shop on every corner (boring) 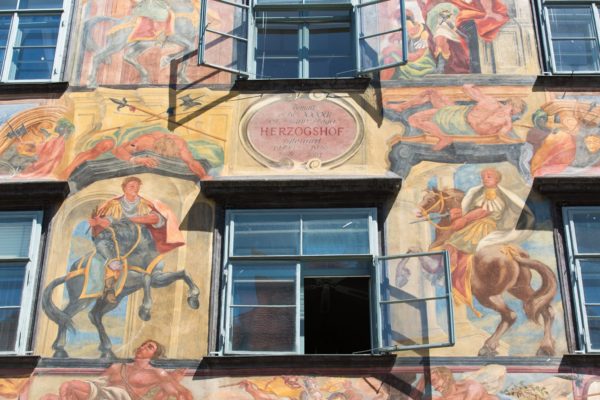 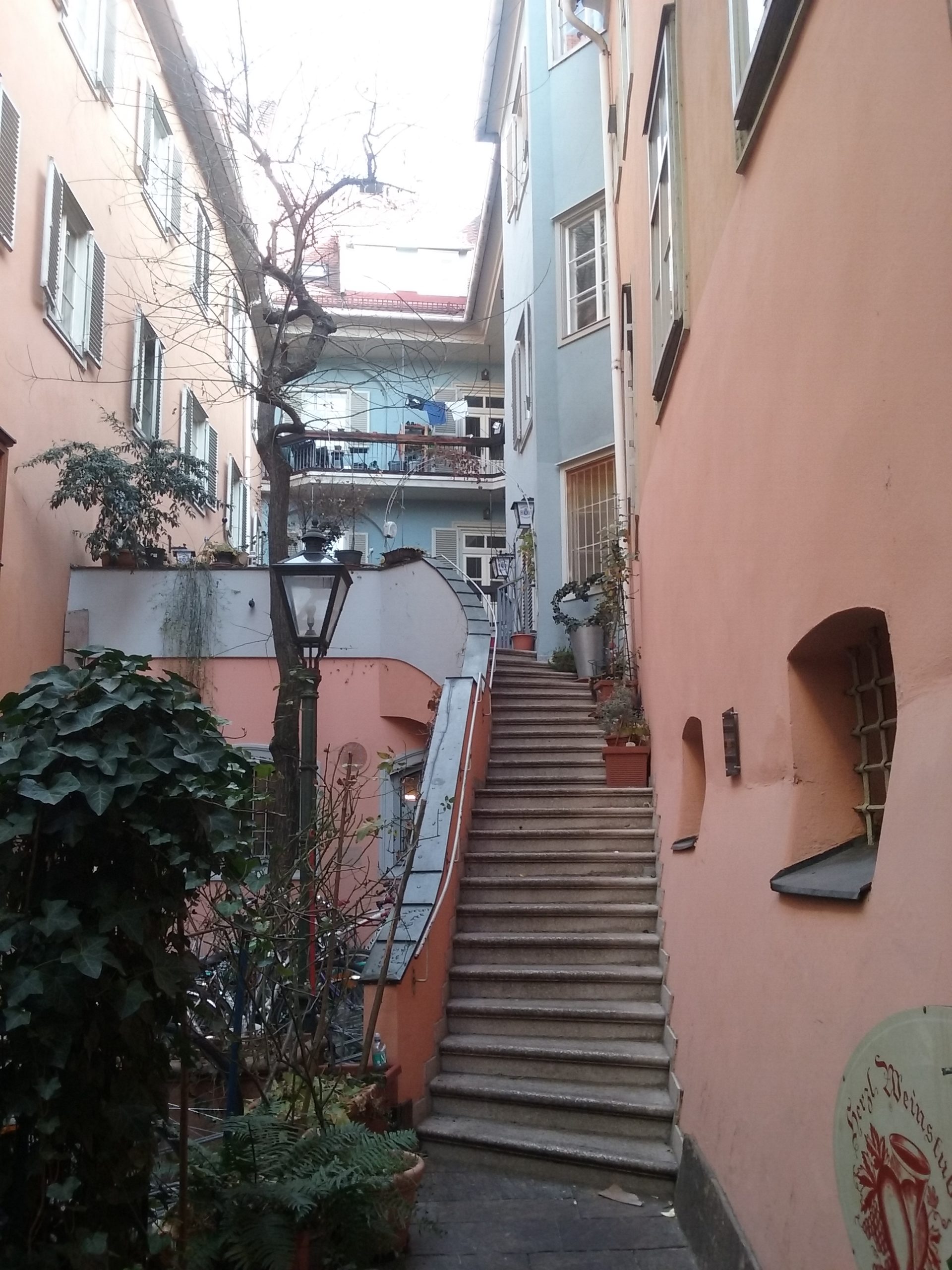 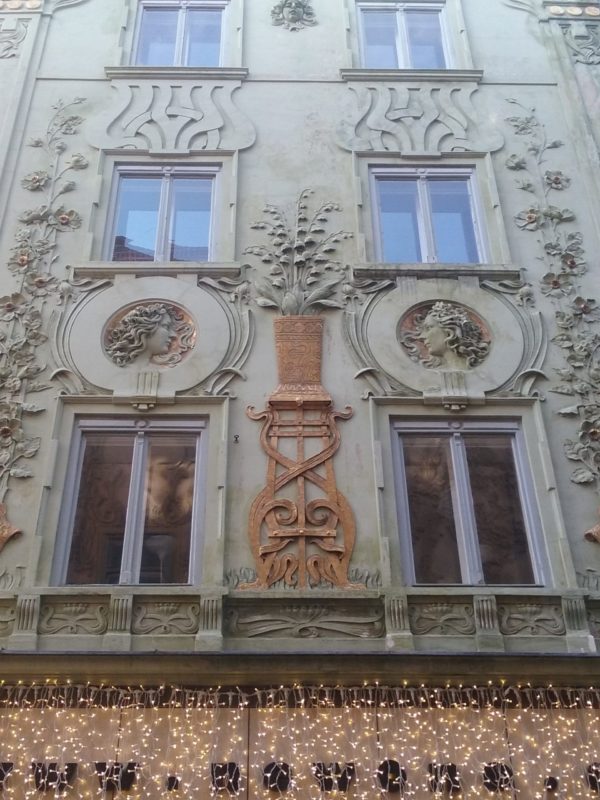 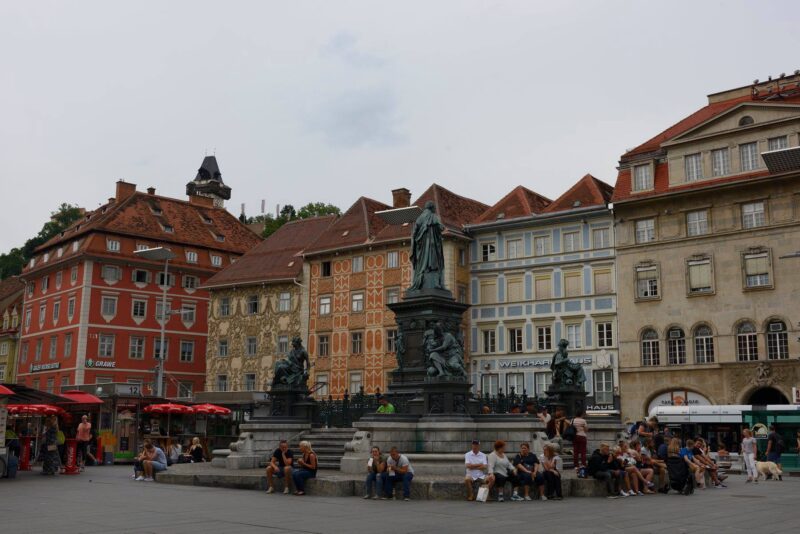 “Graz is a pleasant little city – perfect for a long weekend. I went before Christmas, so I was able to experience several bustling Christmas markets.

I only looked around the pedestrianized downtown, breaking up my stroll with meals in vegan restaurants (Greenhouse, Erde) and pleasant coffee houses (Buna, Tribeka) as well as the mulled wine stands at the markets.

The bus dropped be off at the station (Europaplatz) and from there it was a 15-20-minute walk to the city center. Maps and travel guides can be found in the tourist information office – the travel guide recommended three walks, and gives short but good descriptions of the sights along the way.

On the banks of the Mura, the river which runs through the city, is the Schlossberg, or castle hill – I went up by funicular railway, but there’s also a lift that takes you up inside the cliff. The view from the top is beautiful. On the way back down I took the steps. For the funicular railway you have to buy a public transport ticket (€2.20, giving you one hour’s unlimited travel on any means of public transport). There’s also a 24-hour travel pass, but given that you can walk everywhere, it probably isn’t worth it. There are many attractive buildings in the city, including the city hall and several palaces, but even many ordinary residential buildings have been very attractively restored. There were a lot of tourists, as both Austrians and foreigners travel here for the many Christmas markets and the beautifully illuminated city. I heard a lot of Hungarian and Italian. The locals also seem to enjoy visiting the markets, where there are also concerts in the evening and on weekends.

The market on Kaiser-Josef-Platz was a little disappointing, as there wasn’t much on sale (apparently on Fridays and Saturdays it’s very popular) but at least I was able to buy some famous Graz pumpkin-seed oil.

The tram between the main square and Kaiser-Joseph-Platz is free (one stop) and if it’s very cold, it’s worth stopping in at the K&Ö department store, which is right in the heart of the city and well heated.

The modern building on the banks of the Mura is the “friendly extraterrestrial” and houses a museum (Kunsthaus Graz). Though it hardly blends into its surroundings, somehow it still manages to look good.

I don’t consider Graz a ‘spectacular’ destination, but it’s a very pleasant, friendly place, with plenty of people from all corners of the world, as well as locals, of course. There are lots of students, too. A little taste of western democratic culture. Because of the cold I didn’t venture much beyond the old town, but the surrounding countryside is apparently also very beautiful.” (Kathy, 2016) 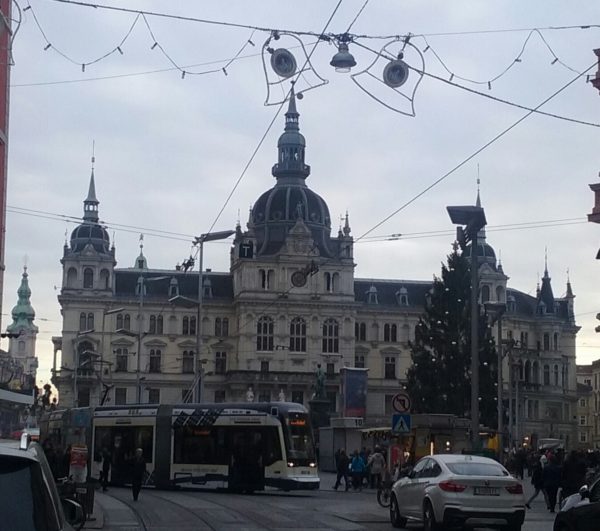 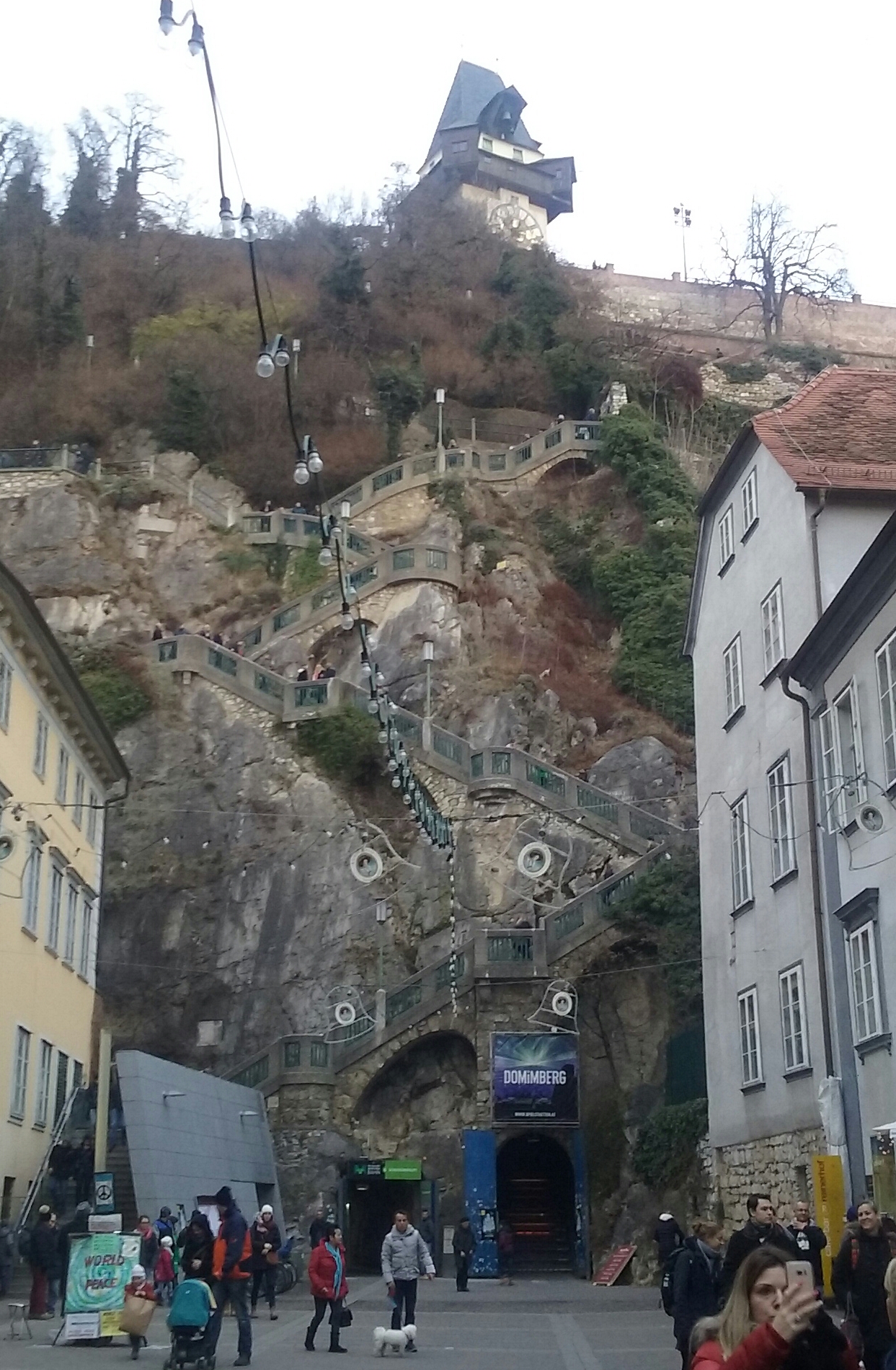 Graz - funicular railway (or lift) up to the castle hill - r.k. photo 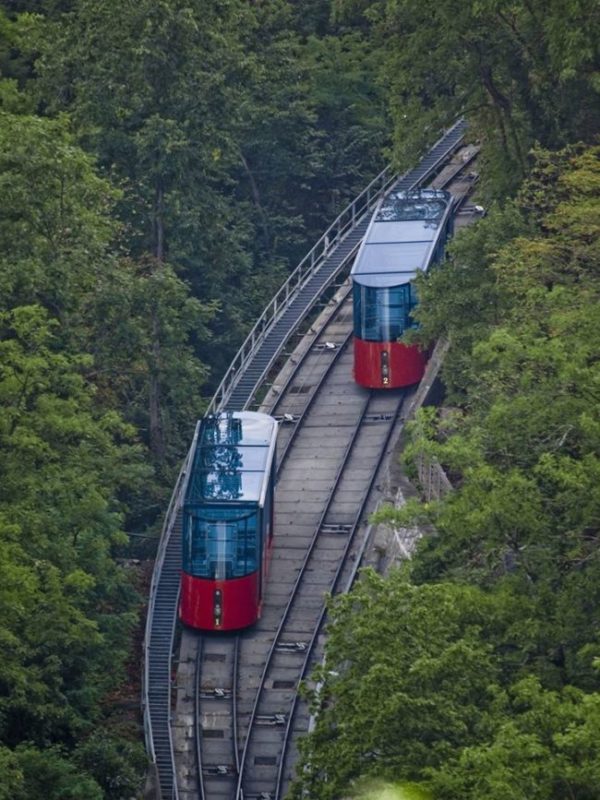 Graz - The Schlossbergbahn funicular takes you up the castle hill of Graz - b.b. photo 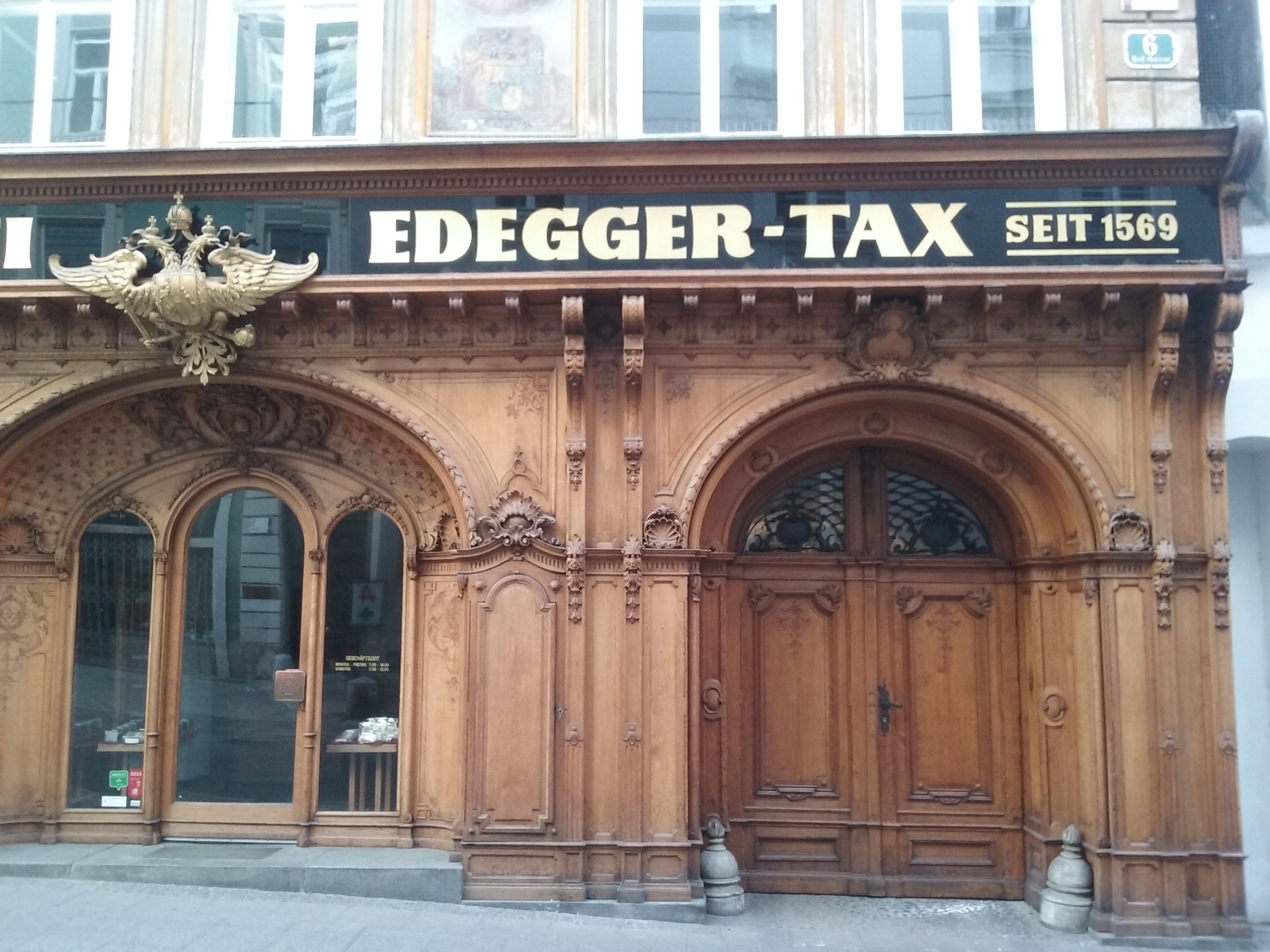 Graz - this is not a taxation office - this is the oldest, still-functioning bakery (Hofbäckerei Edegger-Tax ) in town - since 1569! - r.k. photo 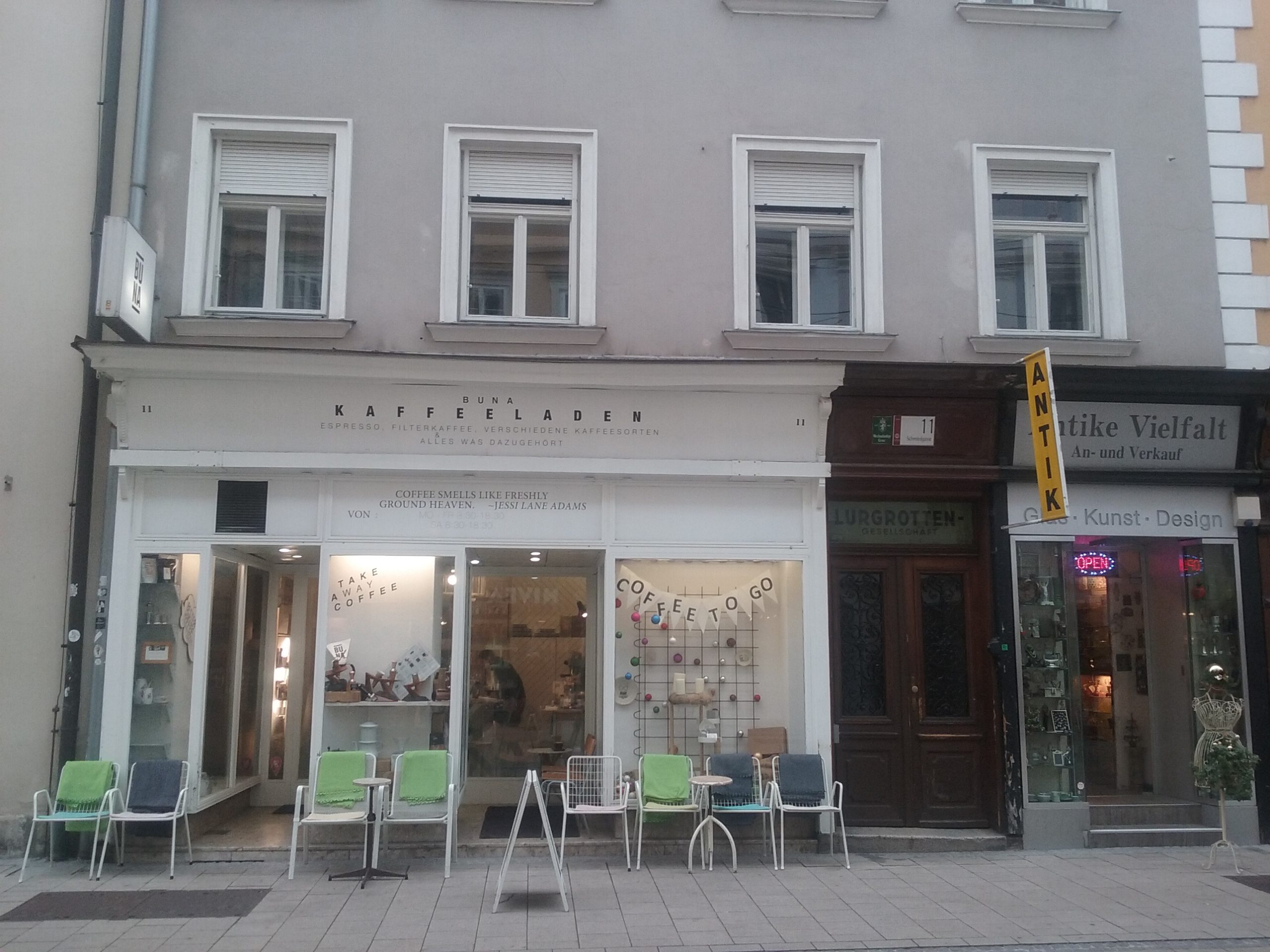 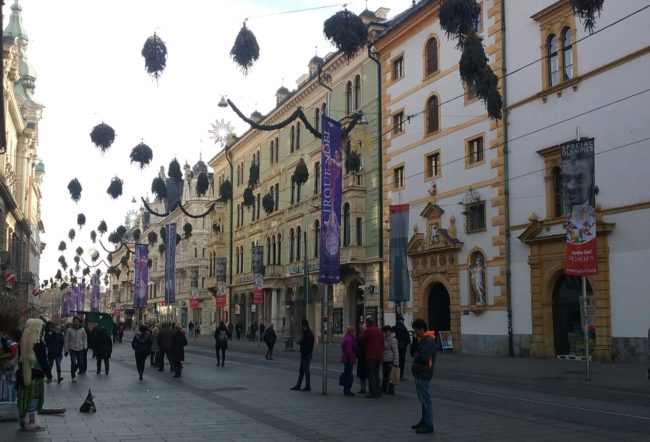 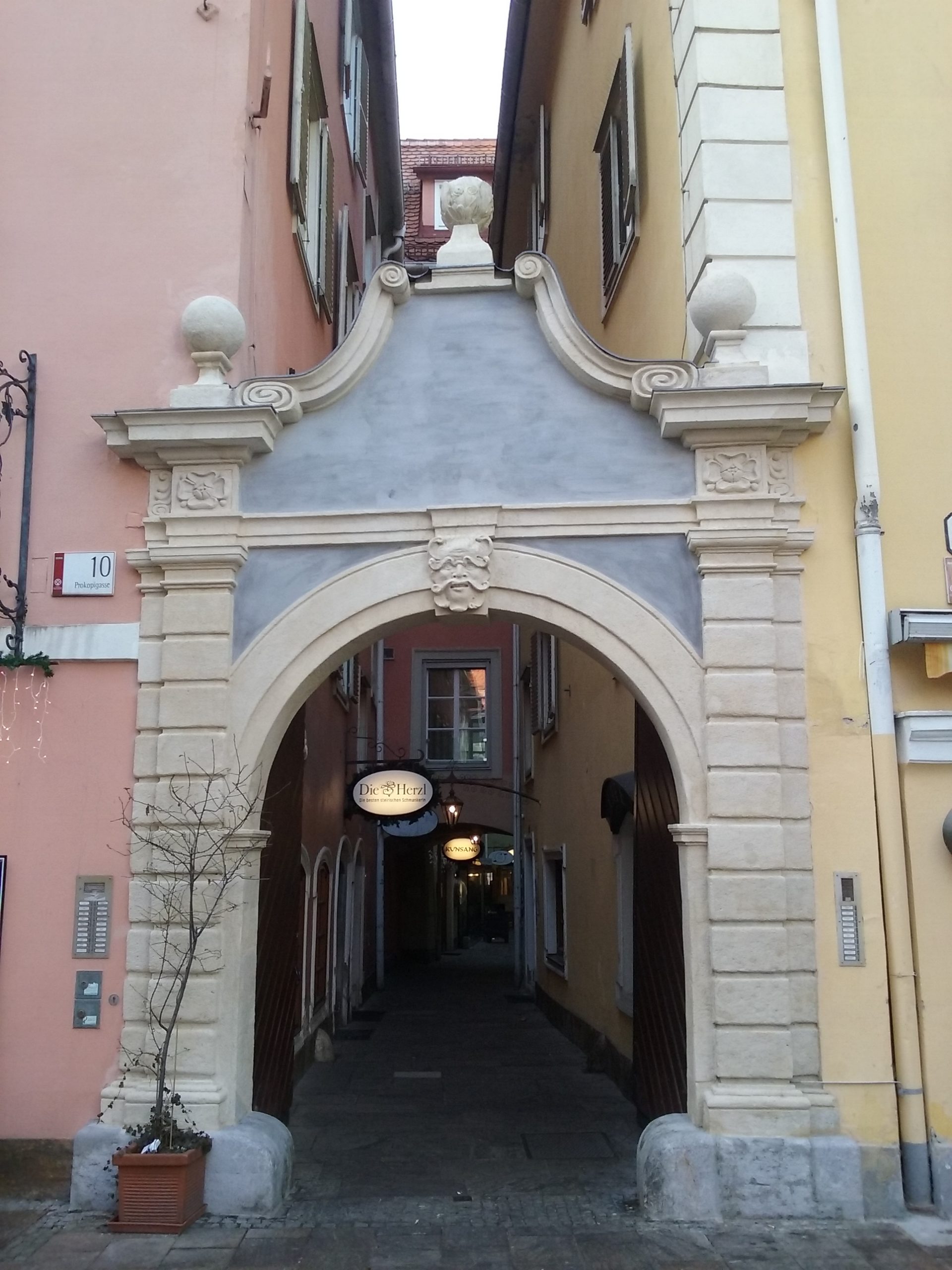 ,, The Annenstraße at night can be a bit scary for solo women since many Arabic-looking men stare at you as if you're some potential prey for them. The same goes for Griesplatz and sometimes Jakominiplatz and the central railway station (Hauptbahnhof) at night. The rest of the town is really safe." 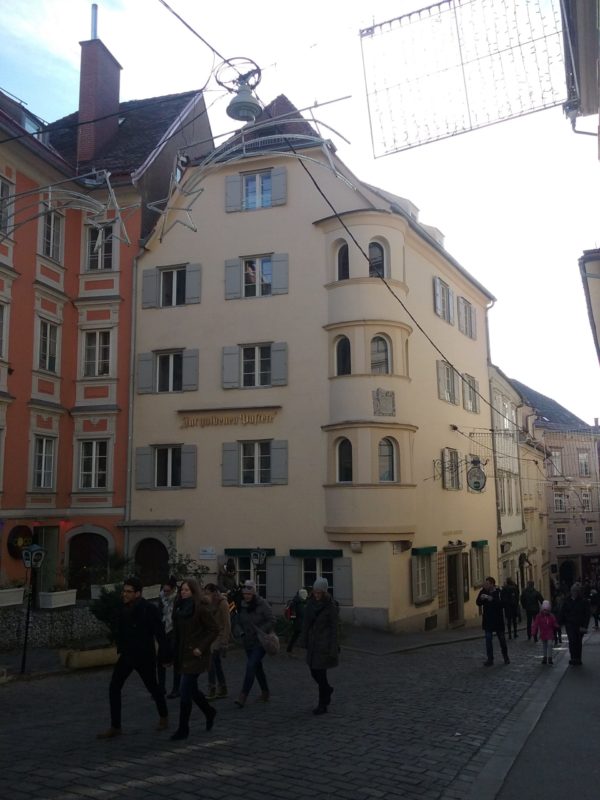 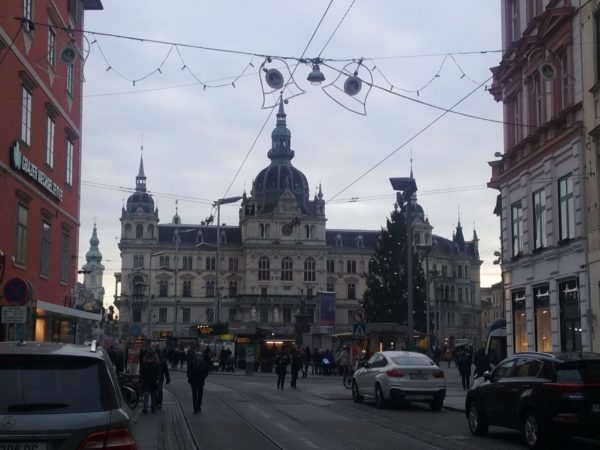 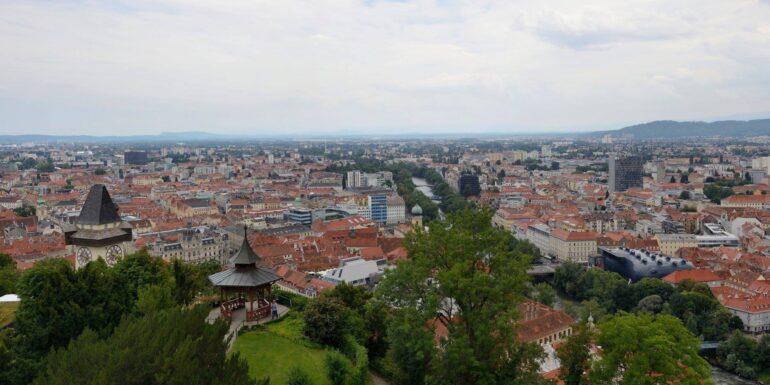 The emperor Ferdinand II (1578-1637) made Graz the center of The Holy Roman Empire for a short time. He was a remarkable historical figure, starting the 30year war, and the Counter-Revolution in Germany and Bohemia. 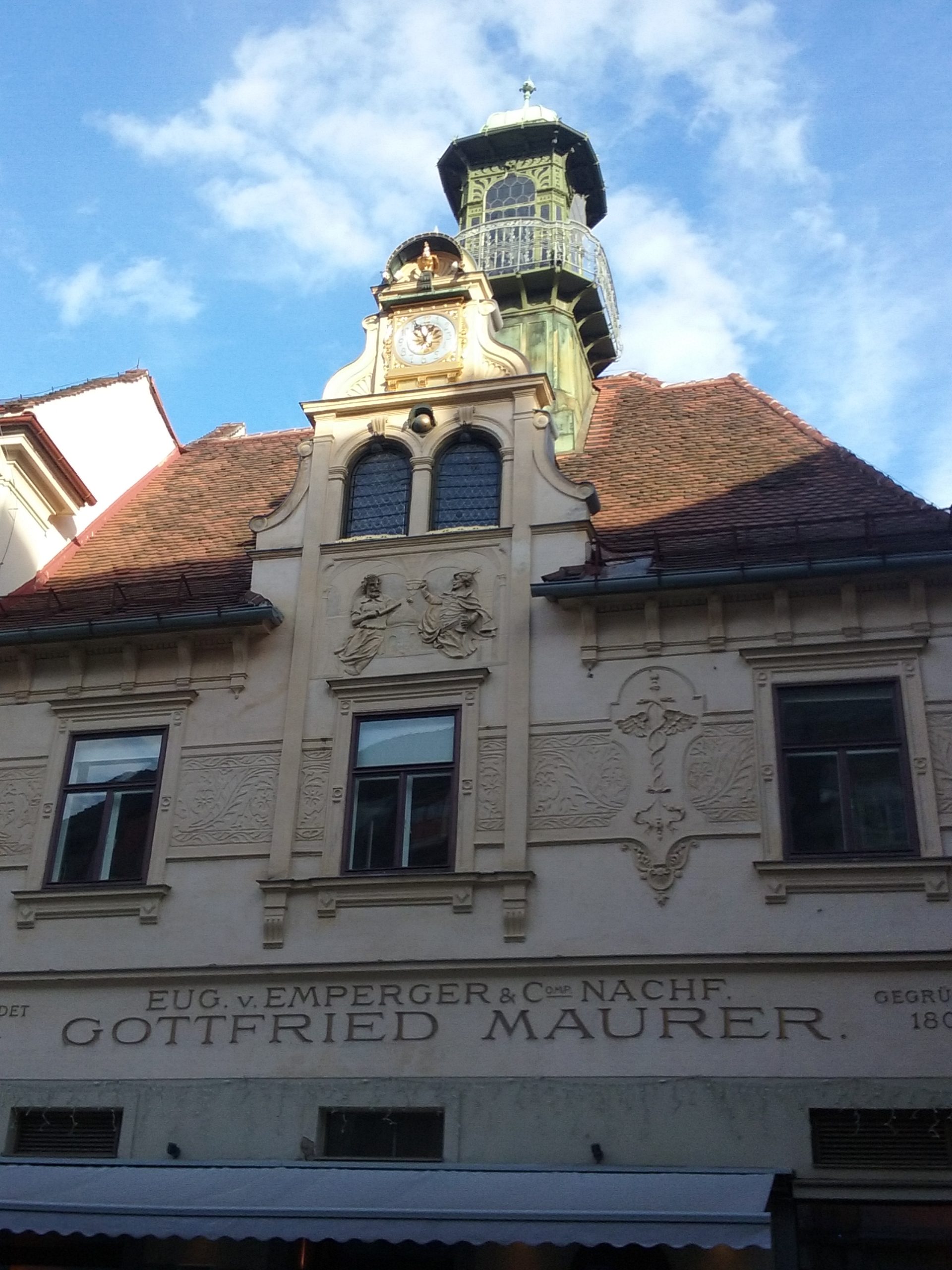 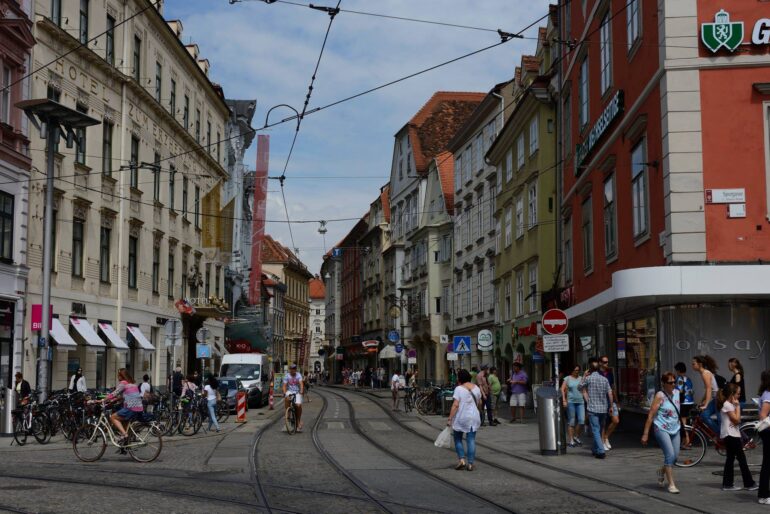 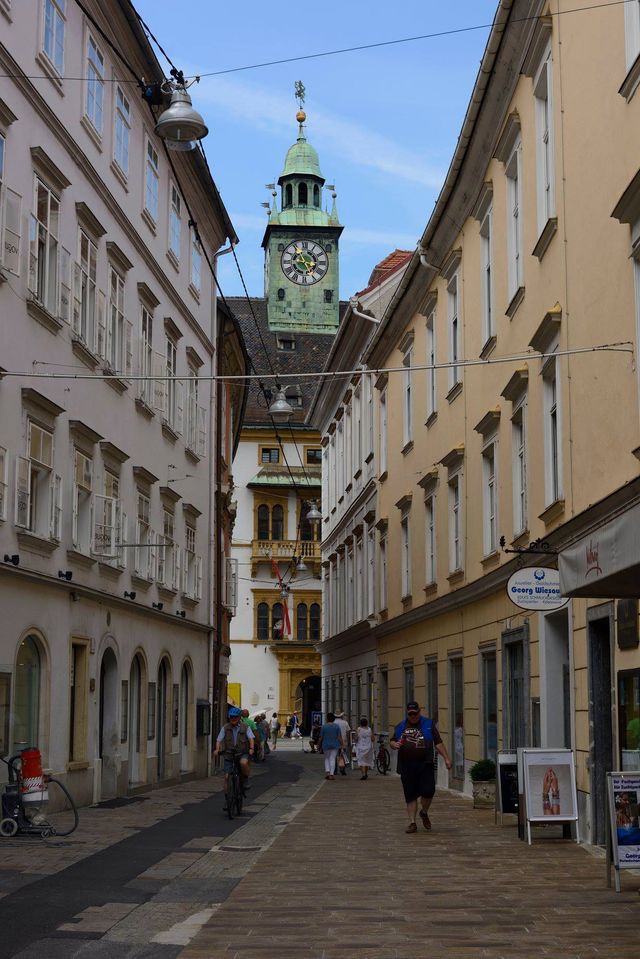 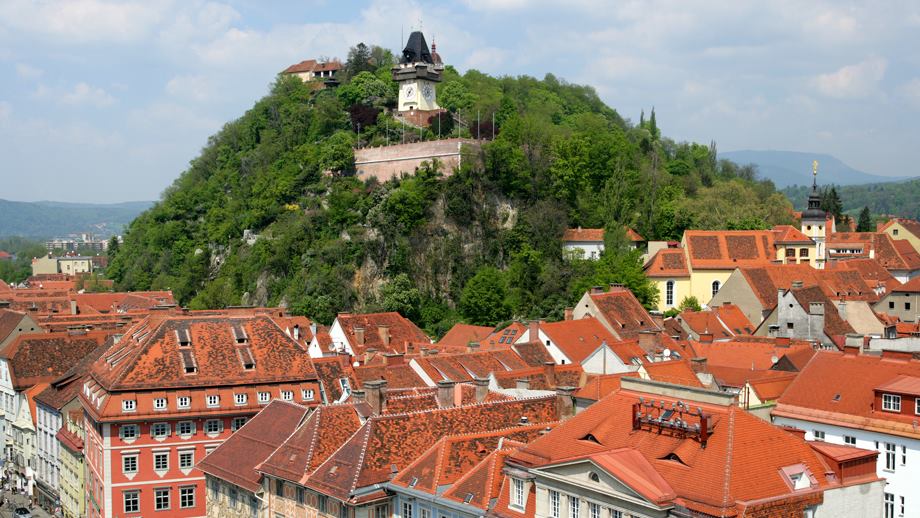 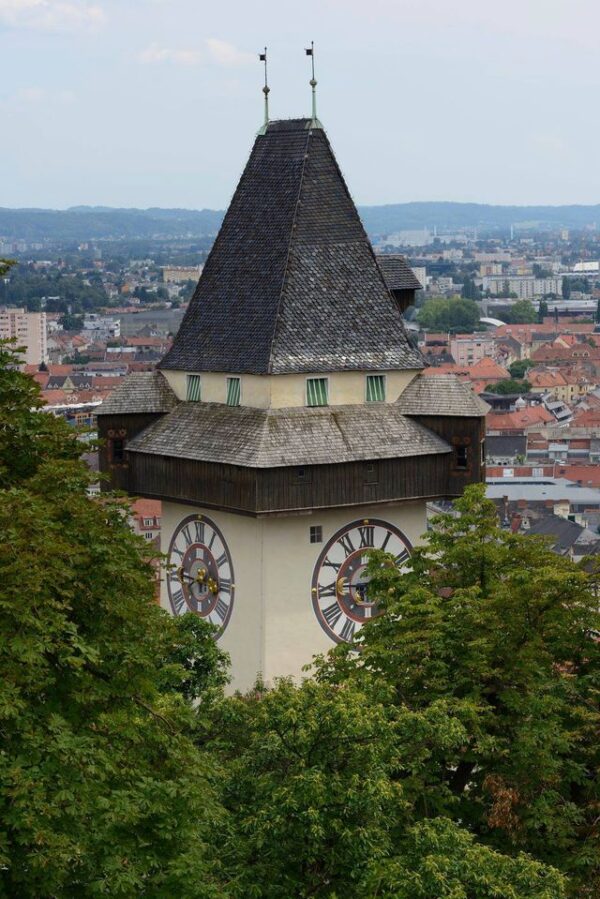 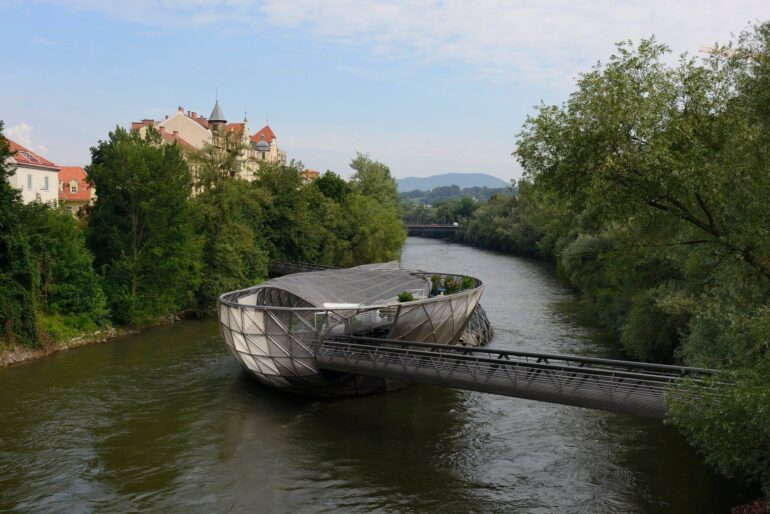 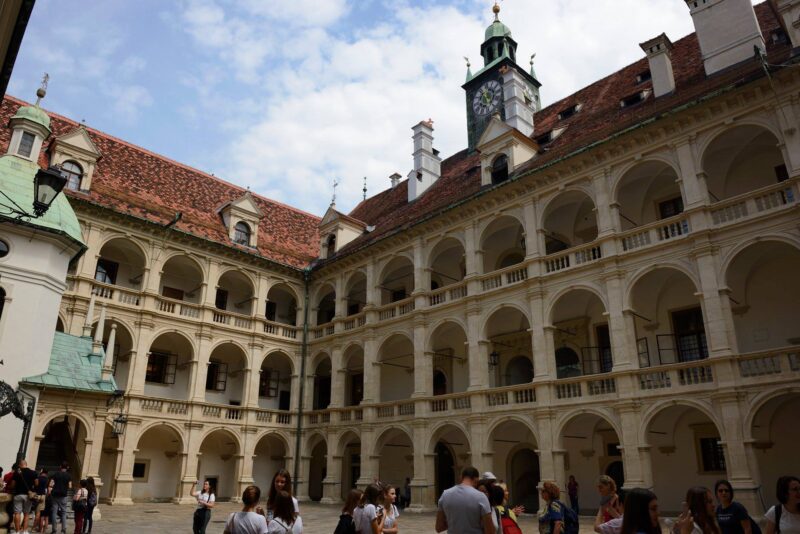 Graz - courtyard of the Landhaus, Renaissance palace from the 16th century - m.a. photo 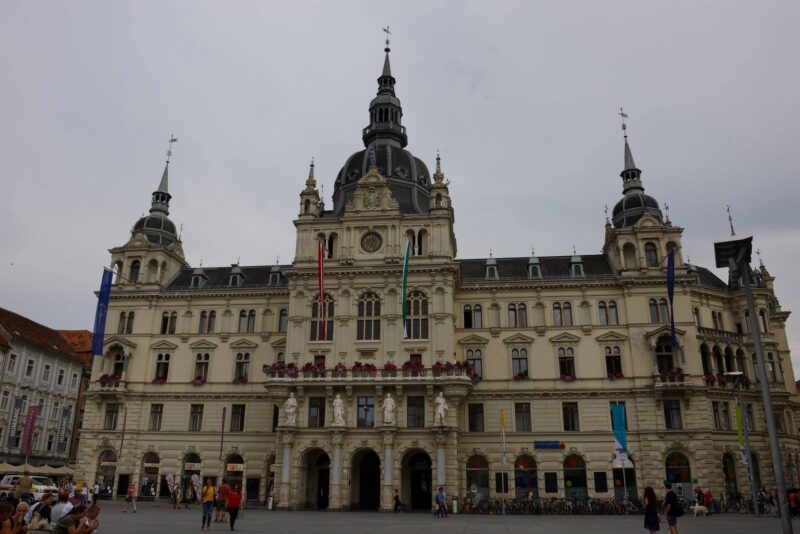 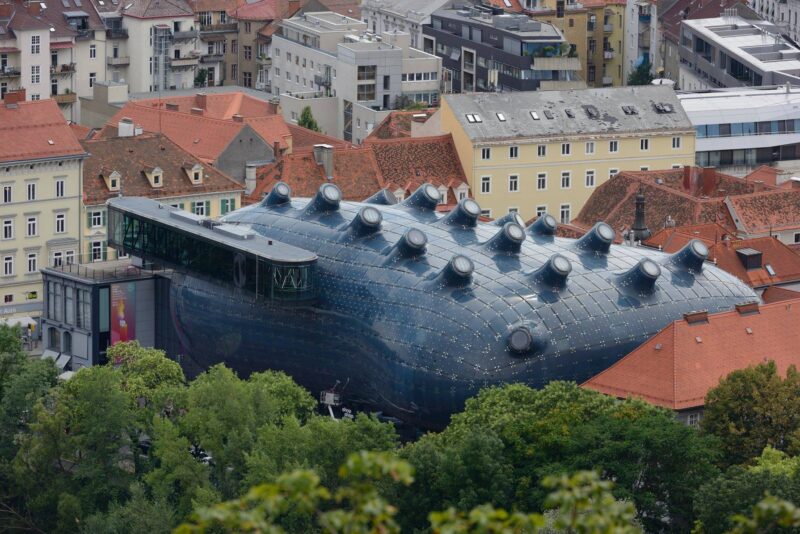