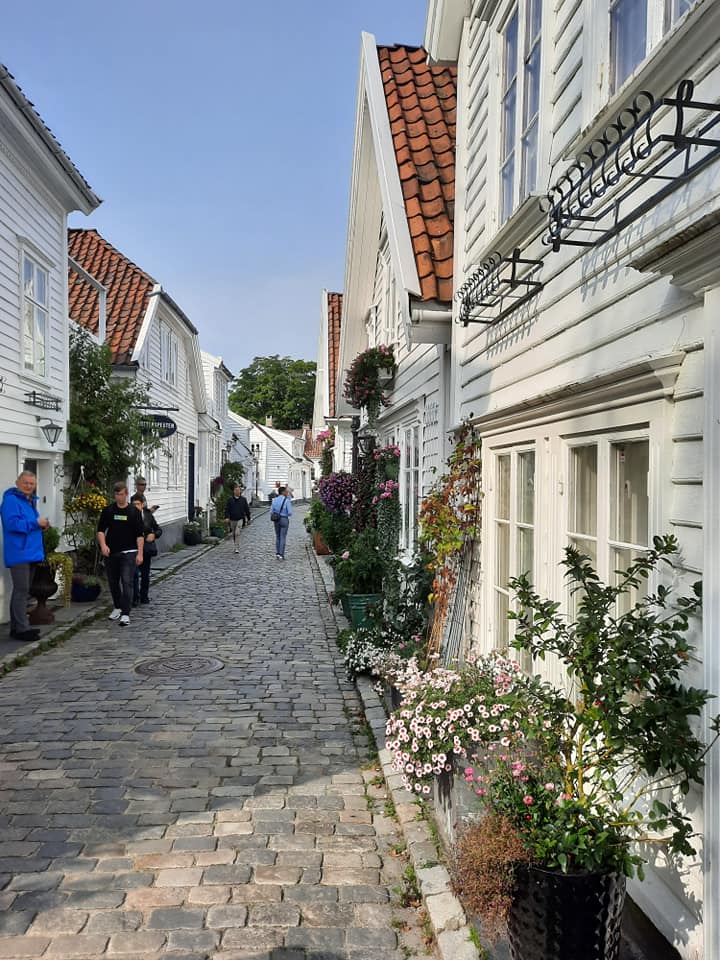 “Hei alle sammen!”
1. Stavanger: Norway’s oljebyen (oil town). It has a population of 132,000 with 320,000 living in the broader agglomeration. The city center has been spoiled by some tall, grey office buildings, public institutions, and facilities serving the oil industry in the port, but the old town (Gamle Stavanger) is fantastic: white wooden houses from the eighteenth/nineteenth centuries (some like little gingerbread houses from fairytales), narrow cobbled streets, lots of flowers, almost like an open-air museum (there are hardly any shops and I think cars are forbidden). It deserves to be a UNESCO world heritage site. The harbor bay is also beautiful, but more touristy and less authentic, as is the district to the east of it, where the restaurants, souvenir shops, and the “mini bohemian quarter" of Øvre Holmegate are located. A typical Norwegian city: tidy, clean, and developed, and of course, everything is ridiculously expensive. There are no major sights, though the cathedral (Domkirke) is one significant historical edifice, and there are some small old museums (which we didn’t visit).
2. Lyse Fjord: The real attraction of Stavanger, which can be reached in an hour by boat, or 1.5-2 hours by car and ferry. The Stavanger-Tau ferry is 40 minutes away, but the undersea tunnel is already under construction and apparently will be ready next year. The fjord is beautiful from sea level (on the boat) and from the top, up on Preikestolen (we took the Rødne Fjord Cruise and hike combo), but there are many more options for fans of active tourism: Lysebotn at the end of the fjord, Kjerag Rock, Flørli with its 4444 steps (the longest flight of wooden steps in the world) and plenty of hiking trails. From my experience, I would recommend 2.5 + 1 + 2.5 hours to climb Preikestolen and get back down again, or 3 + 1 + 3 including rest breaks. If the weather is bad I wouldn’t recommend doing it, since if you can’t see the fjord from the top then there really isn’t much point in the climb.
3. Southern Norway: Take the Jæren route to Kristiansand (500 km there and back). Orrestranda, the longest sandy (free) beach in the country, and located about 40-50 minutes from Stavanger, is very beautiful: there are no buildings and you can't see beyond the sand dunes at the end of the beach, so it looks natural and attractive. Worth seeing. ;)
You can usually drive at an average of about 60km/h. It’s impossible to overtake due to the winding roads, tunnels, and single lanes, and Norwegians generally adhere to the unreasonably low-speed limit. An exception to this is Sunday afternoon-evening when they want to get home from the hyttetur, in which case the average speed rises to 80-85 km/h. Here, too, the landscape is typically Norwegian: mountain, fjord, lake, bridge, mountain, fjord, lake, tunnel, and so on. Due to the mild climate, many (Norwegian) tourists visit the seaside towns, some of them coming by boat/yacht, and there are a lot of summer homes (cottages, e.g. on islands or by a lakeside). Sogndalstrand is a beautiful little place, though you can see it all in 20 minutes, and Flekkefjord and Kristiansand are very charming, and each worth an hour or two. The hygiene standards and quality of public toilets put ours to shame.
4. Clarion Hotel Stavanger: a good but not outstanding hotel. Breakfast and cleanliness are perfectly adequate.” (bono, 2018)

“From the airport, the bus ticket costs 37 crowns to Stavanger if you buy the ticket through the Columbus app. And if you buy it from the bus driver, it's 57 crowns. The ticket is valid for one hour from the moment of purchase. If you transfer to another bus, your ticket will remain valid.

Many get on the bus in the wrong direction at the airport. Be sure to ask the driver if he is going the way you want to go. I went to Stavanger from the airport by bus 42 to Sande Terrasse, and from there, by bus 7 to Stavanger. Another option is bus 42 and then bus 2. On the way back, you can easily buy a bus ticket to the airport at Stavanger Bus Station. A regular ticket, zone 1. It’s possible to run out of time – for instance, I bought my ticket fifteen minutes before departure at the vending machine and then had to wait for the transfer as well, but the driver was nice and didn’t make me buy a new ticket.” (Attila, 2019)

"There is a much less costly option for the fjord cruise, though it can hardly really be called a cruise. The Kolumbus 560 ferry chugs across the bay at 24 knots (45 km/h), and calls at several stops around Stavanger, so you can board it in Lauvikk, for example, a place we reached by car, which we left for free in one of the port parking lots).

It’s worth using this ferry as a sort of ‘water bus’ not only because it's much cheaper, but also because you can get off at some stops and look around a bit. So, for example, we had an hour to climb a short section of the world’s longest wooden flight of steps (Florli 4444).

Tickets can also be purchased online in advance, and the route and timetable are also listed on the Kolumbus website.

Presumably, the local ferry does not offer the kind of comfort and service that a cruise ship does, but we were still glad we chose this option. First, because there were almost no passengers on board, but also because we could sail further into the fjord and climb the steps, and because it was fun – the ship sped across the water so fast that with the wind in our faces we could almost pretend to be superman. We shot out of the harbors so fast we barely had time to blink before we were out on open water. 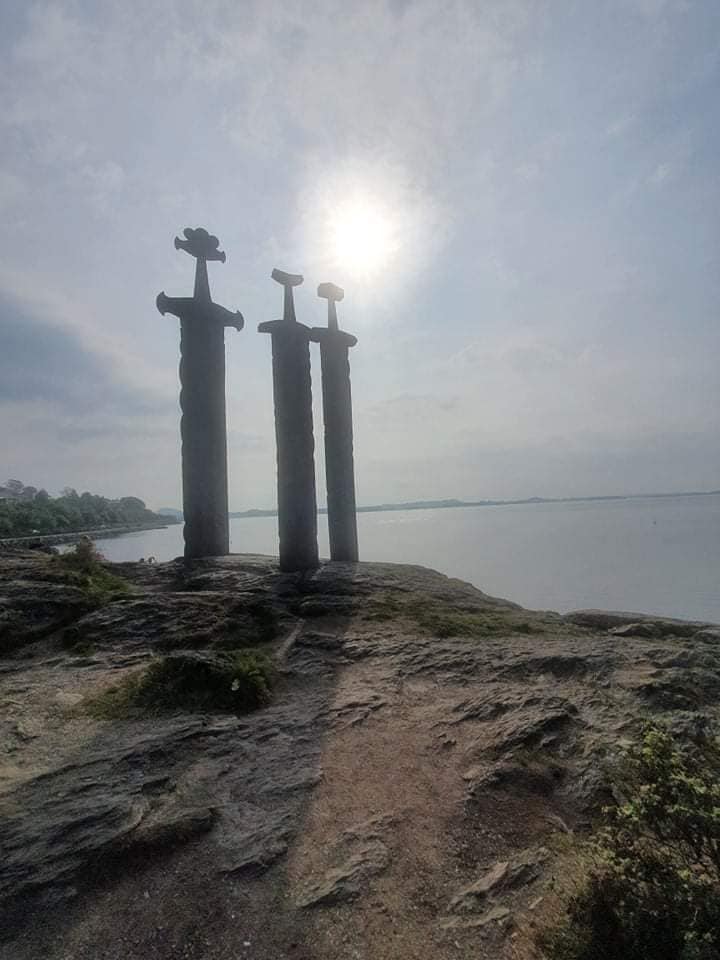 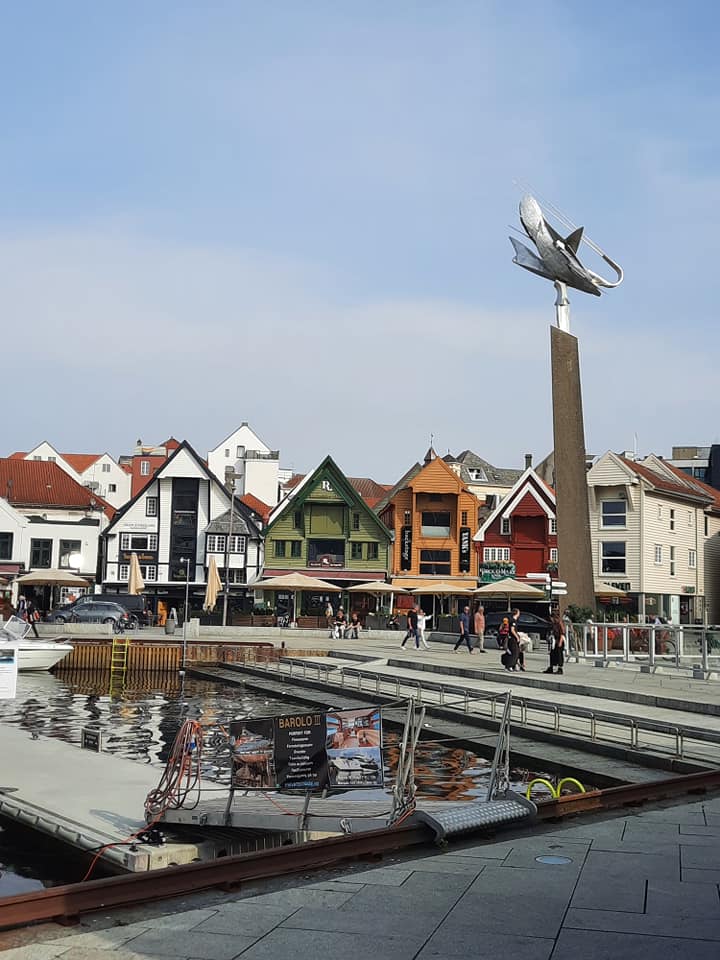 Stavanger - Torget with a sculpture (locally named "the Shrimp")dedicated to sailors lost at sea- v.e. photo

Preikestolen, or Pulpit Rock, is the subject of countless photos, rising 604 meters above the blue bay of Lysefjord. Less adventurous visitors can also view it from below as part of a cruise, but it’s much more spectacular if you climb to the summit. To get there from Stavanger, you must first cross to Tau by ferry, which is almost a cruise. The huge ship glided across the still-cool, crystal-clear sea in the morning sunshine, between tiny islands and cliffs dotted with lighthouses and colorful log cabins.” (2014)

“We set off up the mountain in what was literally a crowd, but luckily after half an hour, people were scattered on the heavier ascents, with everyone climbing the steps at their own pace. The height difference of 330 meters took almost 4 km to climb. We started from a height of 270 meters, and the clifftop is at an altitude of 604 meters. The hiking trail is well developed, and since there are so many hikers, you don’t even have to follow the signs, you just follow the people in front. There are some flatter sections where you can catch your breath and three steeper sections, but you don’t need any special training to complete the climb. We reached the top in about an hour and a half. We noticed on the way how many of us were going uphill, and how many were ahead of us, but how few were coming back down in the opposite direction. Since there was no other way down, and we didn’t suppose that everyone was falling off the cliff, we feared that it would be very crowded at the top. We got there in an hour and a half and people were genuinely lining up to take pictures of the most beautiful part of the cliff, where you can also get the fjord in the background. We didn’t line up for the minimum half-hour queue, but instead ate our hiking chocolate and took some pictures from there, where it was possible without queuing.

There is no barrier anywhere on the edge of the cliff, and it’s unbelievable that only one person has fallen off the edge since they started documenting accidents of that kind. Yet there are a lot of people up there, and in the summer months, even more, people take the several-kilometer hike. I think everyone naturally pays attention to those nearby, and there’s no jostling near the edge of the cliff. We were very lucky with the weather, at least. It was a little cooler than down in the parking lot, but the sun shone all the way and the wind wasn't blowing.

We stayed at the top for about half an hour, then headed downhill. The way back wasn't much faster either, and there were more people going down now, so we had to go carefully. It’s worth starting with this tour if you want to visit all three famous Norwegian cliffs (Preikestolen, Kjeragbolten, Trolltunga) because at least that way you get familiar with the local tourist routes. The signs are different from the ones we are used to. For instance, here you follow a red T, the hiking trails sometimes lead along huge cliffs, and there are no trails on many sections, as we are used to on the busier hiking trails back home. The tourist signs are otherwise practical. There are four colors: green, blue, red and black. By definition, the colors indicate the difficulty of the route, just like on ski slopes. The road to Preikestolen turned red due to the elevation, but otherwise, it is not a really difficult hiking route due to the good path construction. (2017)

, The Preikestolhytta car park is relatively easy to reach by the ferry from Stavanger to Tau, and from there you can continue by local bus or through Go Fjords and Boreal, which sells organized tours. The ferry sells tickets, and you can exchange tickets for local buses using the Kolumbus app, or from the driver if you’re traveling with an organized tour.

After the first steep ascent, an easier part follows, by which time the company getting off the bus will probably begin to split up, with everyone moving at their own pace. The second section cuts through a deciduous forest, with a well-marked path leading along the banks of gurgling mountain streams, lush with green grass and moss. Then comes the harder part, a path winding through gorges and mountains, which eventually leads all the way up the hill to the cliff.

Anyhow, the hike is not very strenuous, and our small team of four did not have any muscle cramps after it, though we’re a pretty mixed bunch in terms of physical condition. By comparison, I climbed the equivalent of 183 floors and 14km to reach the Pulpit Rock, and only 168 floors and 16km to reach Machu Picchu, but for two days after the latter I had a strong aversion to long flights of steps (and would have avoided them if there had been another way to reach Cuzco ).” (2019)